Rider Interview: UAE Team Emirates’ Colombian ace sprinter, Fernando Gaviria, took his second win of 2020 on Wednesday in the Vuelta a San Juan, emulating his victories of 2015. Alastair Hamilton caught up with the Colombian champ at his team’s Spanish training camp before he flew to Argentina to start the new season, putting his less than successful 2019 behind him. 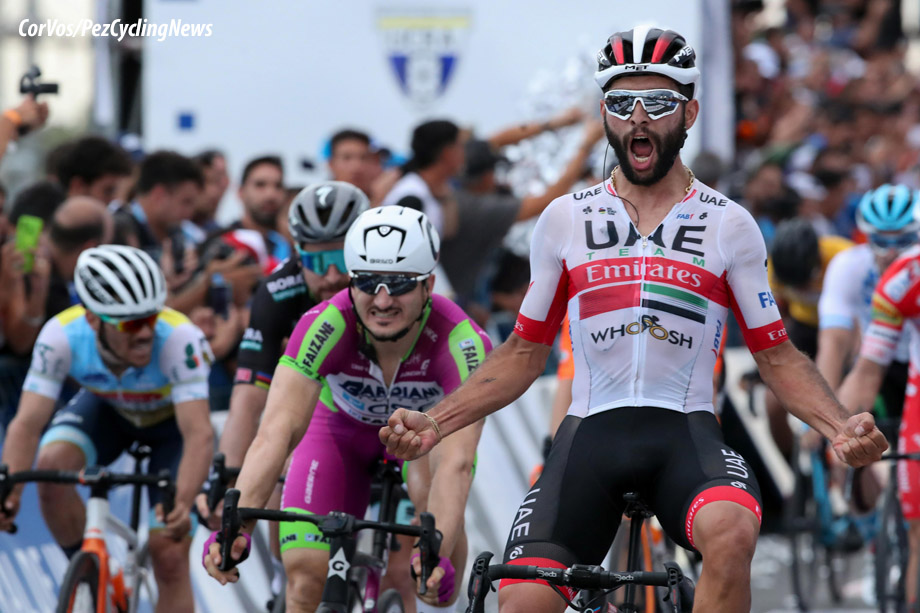 Fernando Gaviria burst onto the World cycling scene in 2015 when riding for the Colombian national team in the Vuelta a San Luis, where he out-sprinted former World champion Mark Cavendish in two stage bunch finishes. Since then he has blossomed into one of the fastest finishers in the peloton with two Tour and five Giro stages wins, plus the points jersey in the Italian Grand Tour, World omnium champion (twice) and many other wins and top podium places.

It was about time he was PEZ’d. 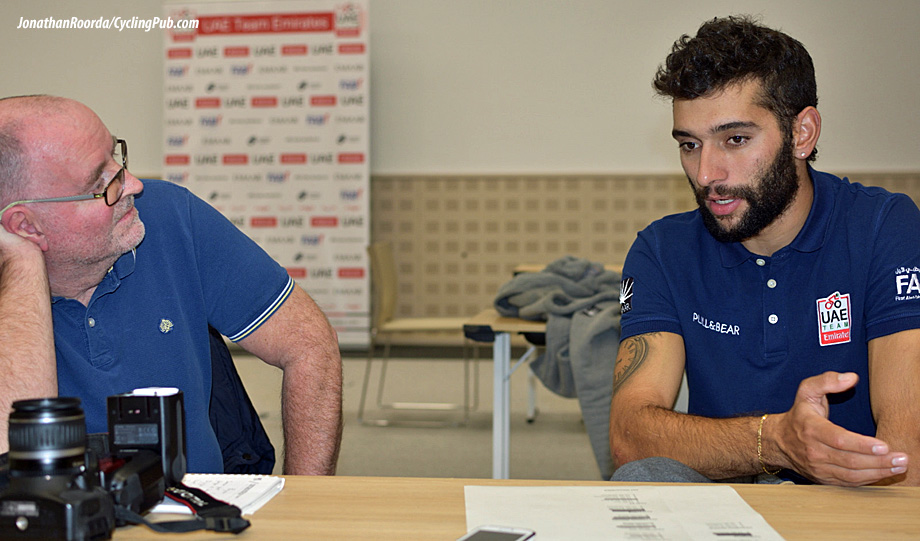 PEZ: How was the 2019 season for you?
Fernando Gaviria: It was difficult because I thought that changing teams was going to be a lot easier, but it was very difficult for me in the first part of the season. It was complicated because I had to change everything: the bike, the clothing, coach, and I was used to something different. Changing teams was complicated but I kept going. I think it was a difficult season, but there is nothing to do about it now and now I’m focusing on the current season.

PEZ: And how are things now?
Yes, I think that last year I learned a lot of things that had to be improved. The team has improved day by day. The team never stops improving, it never ceases to surprise us with the new things that it wants to do. And that is good, because it doesn’t just want to settle being a WorldTour team, but it tries to be the best and that is also what the riders want. We want to help the team to be one of the best. 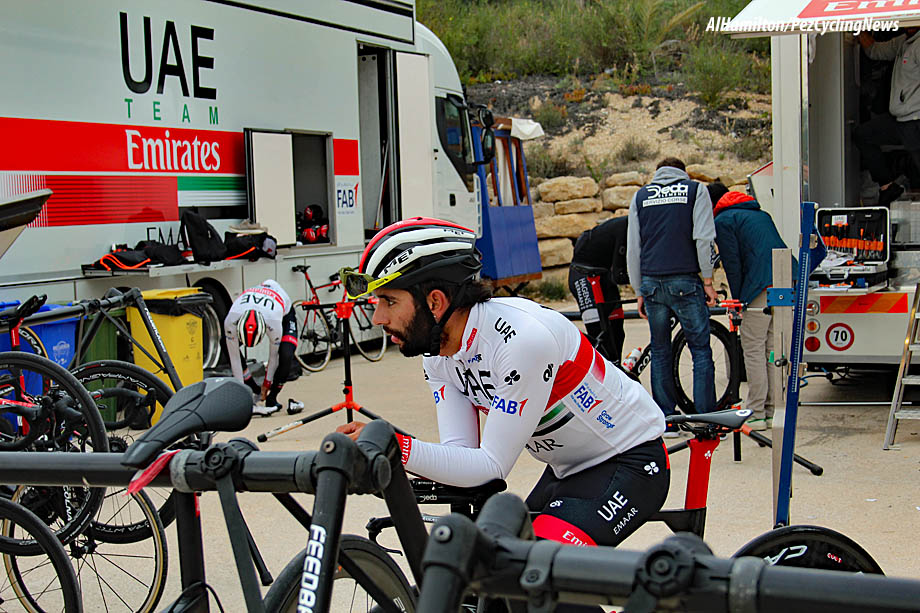 PEZ: You had knee problems due to a crash last year, is that all behind you?
Yes, the problem of the knee was very difficult to resolve and it was very difficult for me to get back to my form. I had days which I felt very good and others which I felt terribly bad. But at the moment, after the holidays, it has improved, so I think I am close to reaching good shape ahead of the start of the season. 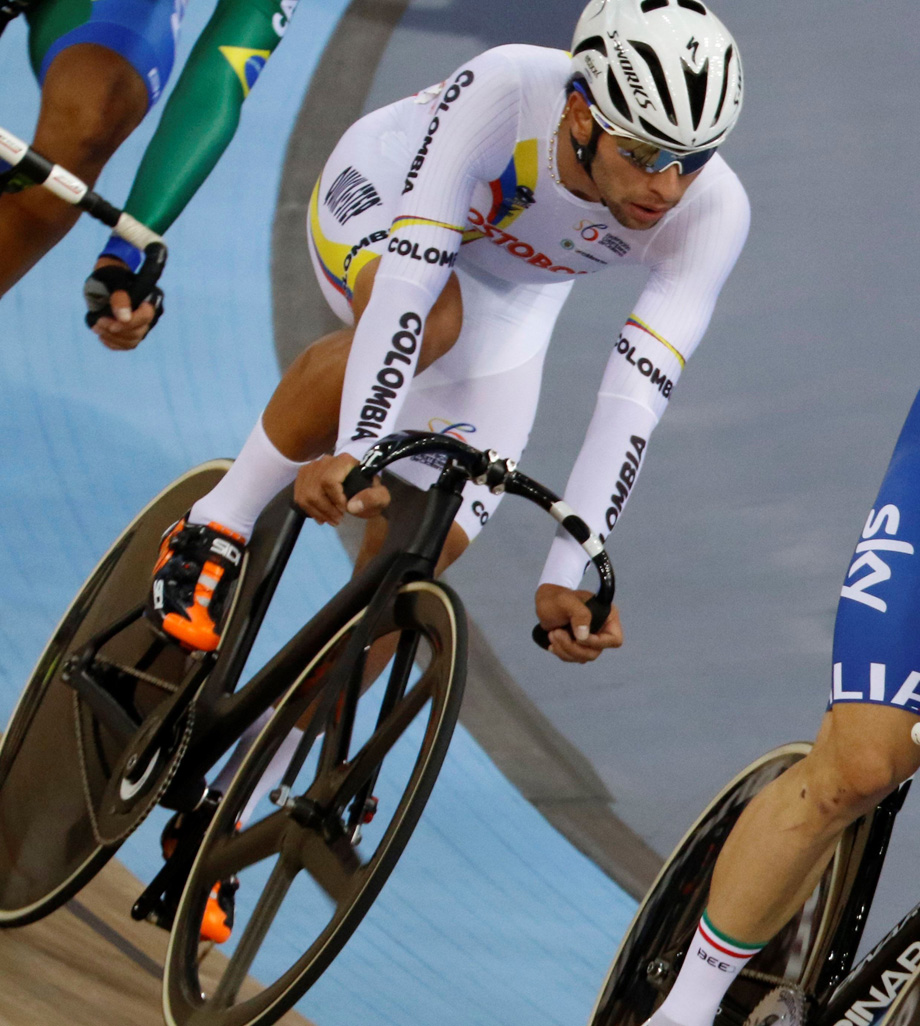 Will you ride the track in 2020?
I don’t know at the moment because I had looked the option of going to the Olympic Games, but Colombia doesn’t have the necessary points to go. So for now I don’t know if there are any options of going to the World Championships or not. So I would say that for now it is ruled out.

PEZ: You have stages wins in the Giro and the Tour, so how important is a Vuelta win?
I wouldn’t call it a priority, but when you already have victories in two races and there is one missing, there is something there. Last year, I really wanted to take that victory and I tried my best but as you saw I wasn’t at my best shape. I wasn’t prepared to go to the Vuelta, and I was very disappointed. But surely I would love to win in the Vuelta because it is important for my career. I also dream of taking the Vuelta leader’s jersey. 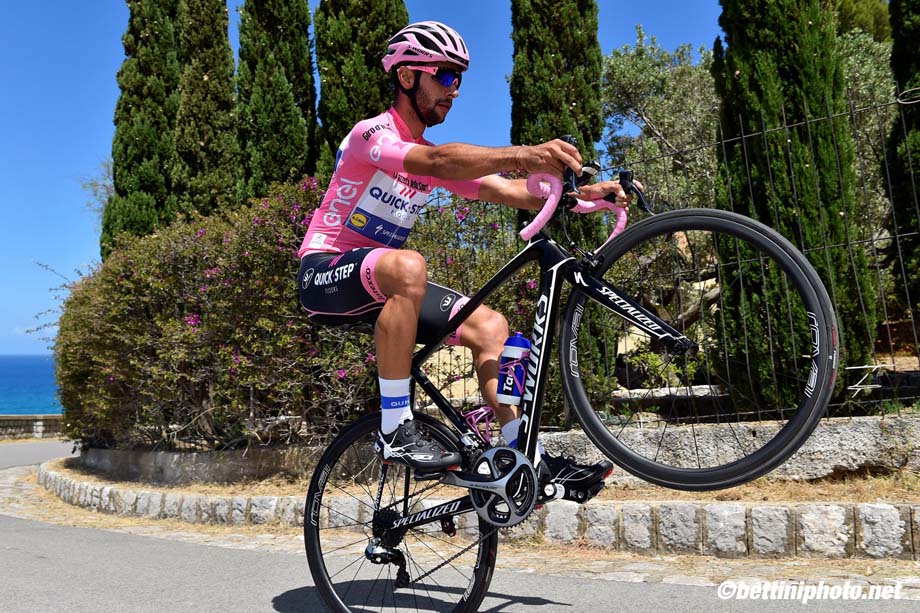 PEZ: Is the arrival of Max Richeze in the UAE team important for you?
It is very important because he is a great friend, a great teammate and a guy I can train with. We can do a specific kind of training, and he is a man that can give a lot to the whole team, not only to me, but to any other rider.

PEZ: Do you think Richeze in the team will help you get more results?
Yes, I think that being with him things will be a bit less complicated because he will bring more help being a great teammate and surely he can also help improve the results of the entire team. 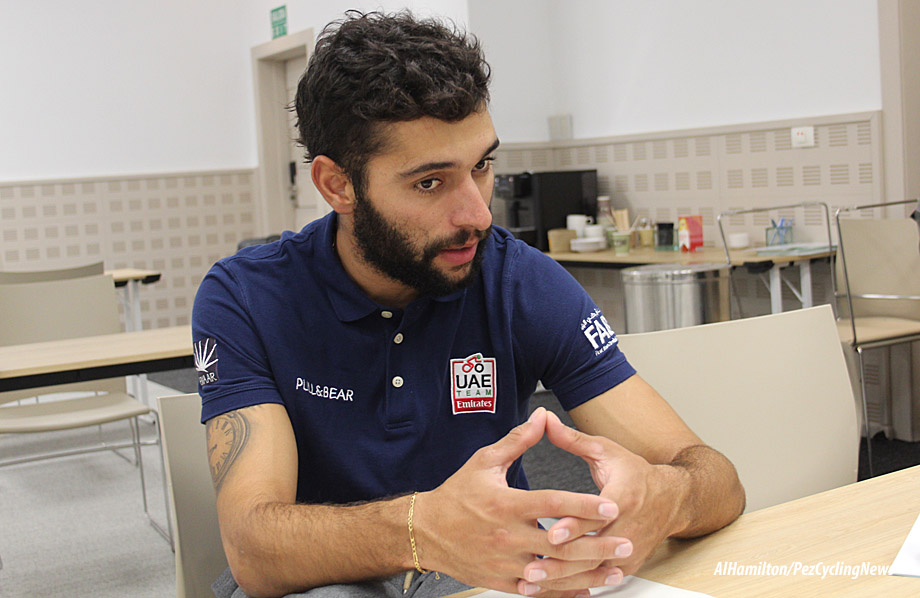 ‘The sprints are always a battle’

PEZ: Has the sprint battle changed over the last few years?
The sprints are always a battle. In the past there were some great sprinters of the highest level, like Greipel and Cavendish, now there are so many top sprinters it is very difficult. Cavendish was one of the most explosive in the World with a big palmarès. When Kittel was in form he was nearly unbeatable with a strong team. It doesn’t matter if you are big, small, fat or thin it’s the size of your palmarès that counts.

PEZ: Who are the best sprinters at the moment?
I think any list would fall short because I wouldn’t remember them all. But there are very strong sprinters like Elia Viviani, Sam Bennett, Pascal Ackermann, Caleb Ewan, Dylan Groenewegen, and Peter Sagan, who isn’t a real sprinter, but he’s capable of winning stages in a sprint, so he plays a very important role. And there are also some new, very strong riders coming through, like (Fabio) Jakobsen and Alvaro Hodeg, who is a very good friend of mine and a very strong sprinter. 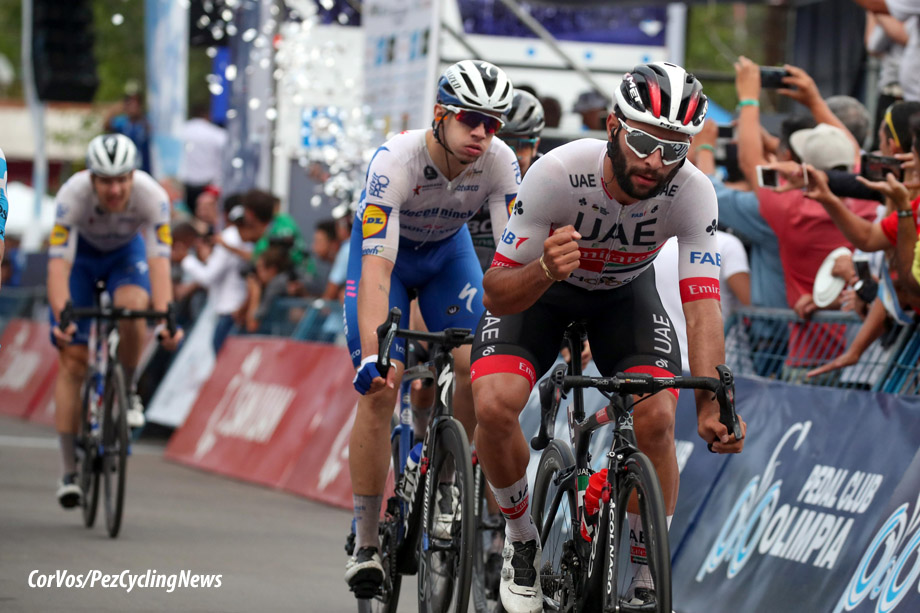 PEZ: These days sprinters have to be able to climb.
Yes, for sure. I think with the kind of races nowadays and the different organisers, sprinters have to be able to climb more, particularly because of the time limits of the very tough stages or other days that are also difficult but finish in a bunch sprint, those are chances that we can’t miss. So that is why I think that we have to focus on climbing a bit better. 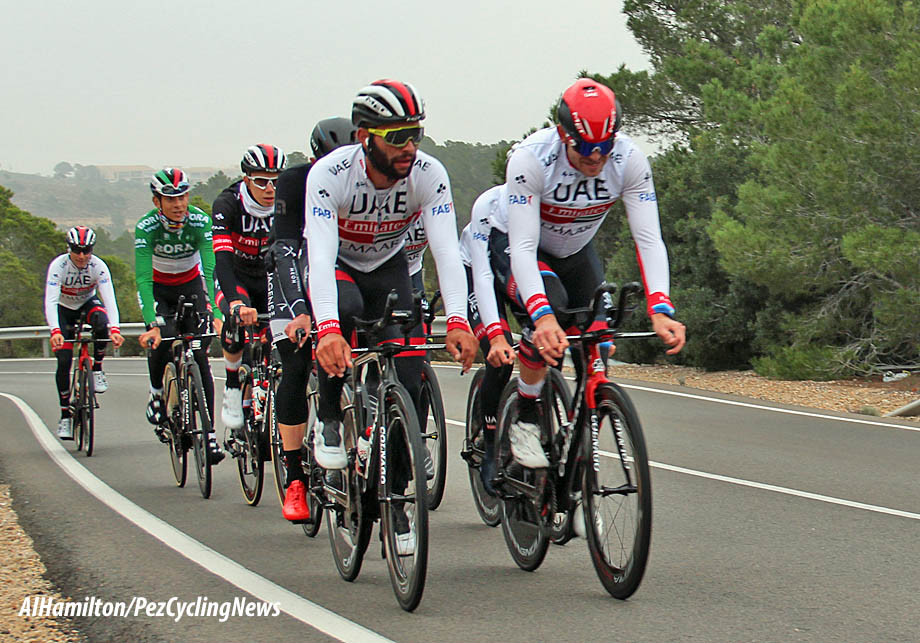 Trying out the TT bikes 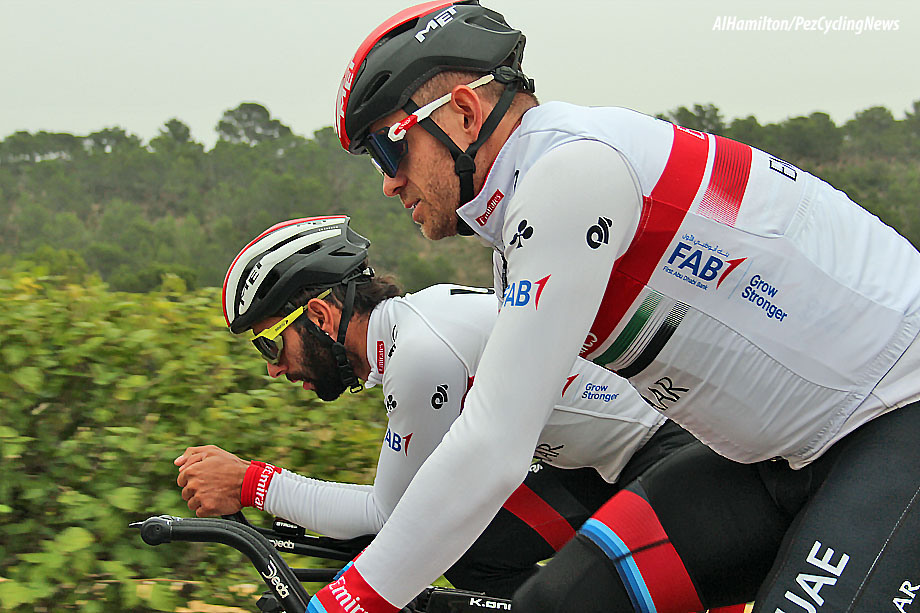 PEZ: Do you get on well with Alexander Kristoff, do you talk much?
We have a good, professional relationship and we can race together in some races. We would always make a decision that is best for the team.

PEZ: Colombian cycling has changed a bit, not just pure climbers like before, there is now some different riders, is that important?
It is important because we have had all kinds of riders. We have had someone like Santiago Botero as the time trial World Champion, many climbers, and we were missing riders on the sprint. But we have been opening that front with Leonardo Duque, Álvaro and me, so it is visible that in Colombia we also have quality riders for the classics and the sprints. 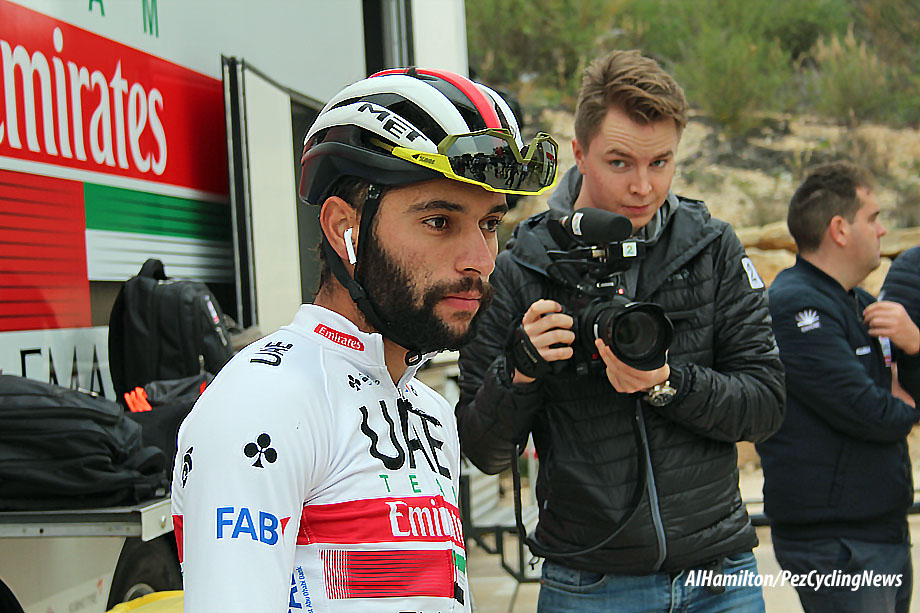 PEZ: Which is your favourite, Giro, Tour or Vuelta?
The Tour, but I love the Giro because every day the food is good, but the Tour is where a cyclist gets his diploma.

PEZ: The Vuelta has too many mountains?
Yes, the Vuelta is very hard. You can’t plan, even on a flat stage, that is where there is the most wind, but there are opportunities for sprinters. 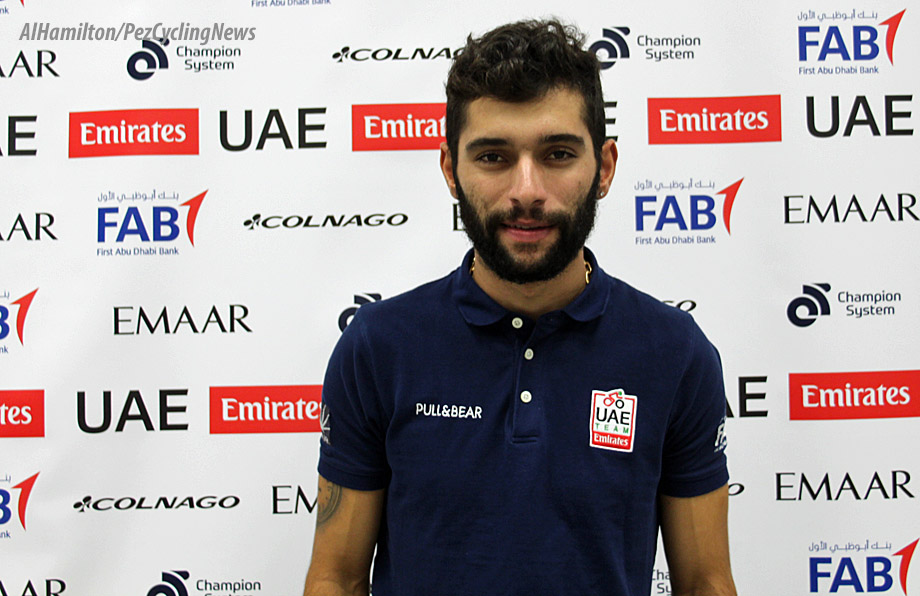