Talk about a sweet cycling assignment – a week in San Remo on the Mediterranean, riding the azure coast and climbs that make la Primavera so famous, on board a new Team Barloworld King XL by De Rosa – topped off with a factory visit and interview with the famous Ugo De Rosa himself!

Meeting Ugo De Rosa is like an audience with the Pope and my bragging rights at the local bike shop increased 10 fold. I was very excited to meet a cycling legend who was behind the bikes that were ridden by most of my boyhood heroes – Merckx & Moser.

Ugo in front of the company he built, celebrating 50 years of making top-end racing bikes.

I’m always wary of meeting people in case it shatters the illusion, but Ugo was an absolute gentleman, couldn’t be more hospitable, still very enthusiastic and loves his sport. And how cool is this: he refers to Merckx as “Eddy’ …like the Pope on first name terms with God!! 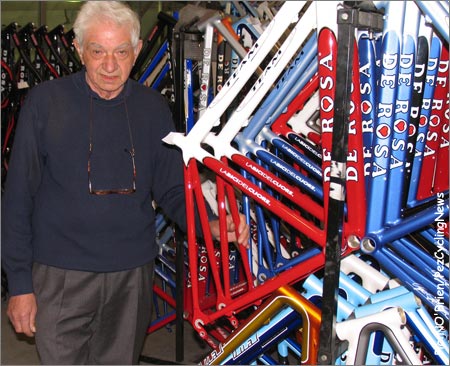 Ugo loves the camera as much as he loves making bikes.

He doesn’t speak a word of English but was happy to translate our interview through his son Cristiano and loved posing for photos (I suspect he’s had lot’s of practise in his time!) A true Italian Artist with a love of what he’s producing, not big headed but quietly confident – he knows he’s good at what he does… nothing more to prove – he’s Ugo De Rosa!

Ugo’s son Cristiano is in charge of marketing and sales, and was a very nice bloke – very hospitable, laid back and knew how to set up a bike in his sleep. Mum was also very friendly, a very Italian Mama and was responsible for sorting me out some De Rosa kit – typical Italian-let the women do the clothes side of things. 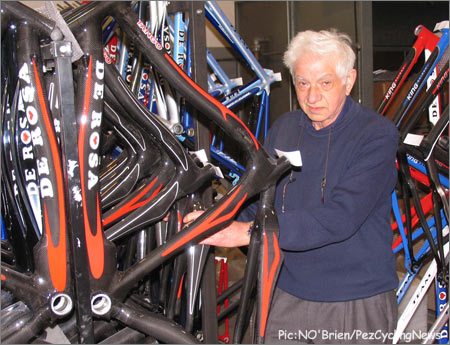 Pez: Ugo, thanks for your time and loan of the King XL Barloworld Team bike bike to PEZ for our touring around the Mediterranean coast while at San Remo!

Ugo says: … No problem glad you enjoyed it. 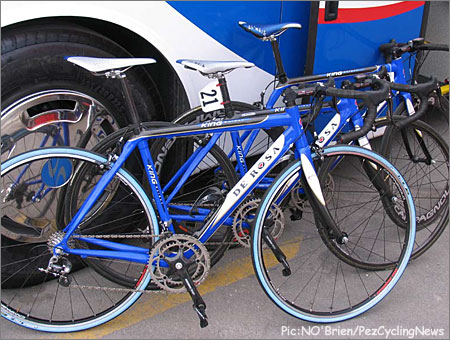 Ugo says: Materials – in the 1970-80’s it was Aluminum, 80-90’s Titanium (we worked with Columbus tubing’s Signor Erzagonasi in ‘85 to develop the max. tube with the “twist” in the middle), and now Carbon which we are still developing and will be with us for some time. Another big change was the introduction of ergo leavers by Campag and the control and safety they give! 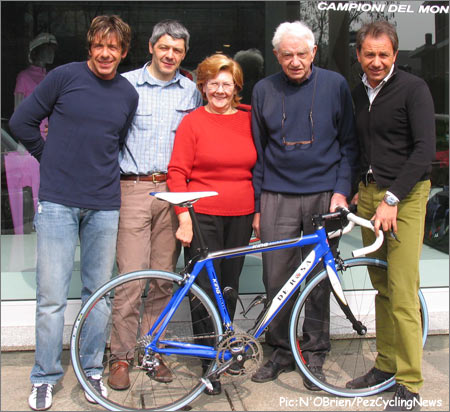 All in the Family: Danilo, Doriano, Mum, Ugo &Cristiano…. De Rosa. Everyone works in the biz.

Pez: Of all the riders you built bikes for who had the best natural position on the bike?

Ugo says: No doubt it was Eddy (Merckx) he was the ultimate man & machine like Coppi before him he just fitted efficiently – because he was tall the only waste of his energy was when he rolled his shoulders when he was tired – BUT that wasn’t often!

Pez: What is the best Bike De Rosa has ever produced?

Ugo says: All De Rosa bikes get the same attention and experience whether it’s for Merckx or Felice Rabollini (Friend of Ugo and local Club rider) they are all built and prepared the same.

Pez: Who in your view are the best riders ever?

Ugo says: Merkcx-obviously, Anquetil, Hinault, Armstrong and so far Cunego (but will only be sure after Giro) Modern riders are different – in the old days riders rode all year, which is not better but just sign of times – things will always change.

Ugo still welds frames and his hands touch every bike with his name on it.

Pez: What was the best race ever on a De Rosa?

Ugo says: 4 races one season – Merckx 1974: Giro, Tour de France, Worlds and Tour of Suisse ( See Pic) I built Merckx 50 bikes that year including 6 in a week for Giro I slept in the workshop to keep on top of things. 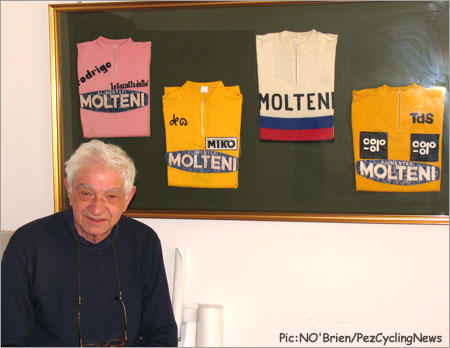 1974 was a very good year for De Rosa – just look at all those jerseys.

Pez: Have you heard any industry rumours/gossip about large manufacturers taking over smaller ones like Colnago and Ciocc and would you be interested?

Ugo says: I never really wanted to sell – it’s not just about the money, it’s more the passion & pleasure, it’s a family business with personal service.

Pez: What’s the most important part of a bike for a young cyclist to invest in? 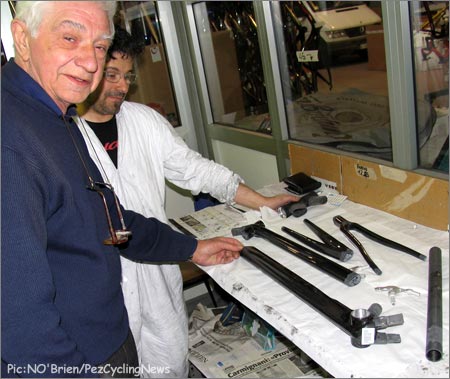 De Rosa’s have been around for 50 years, but they’re committed to using the latest materials and technologies.

Ugo says: They’re all equal – like the body a bike is the sum of its parts need arms as much as feet as much as skeleton – so buy the best you can afford without going for gimmics. 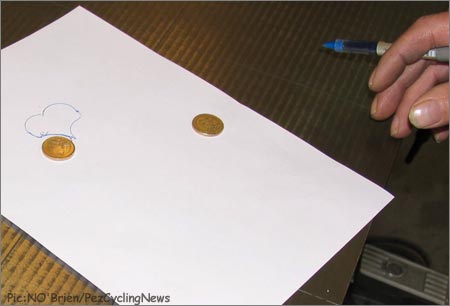 Ugo shows Nick how he created the famous “Heart” logo.

Pez: Finally, why the heart logo…

Ugo says: It developed out of the quest to cut out “frame lugs” and reduce weight. 3 holes would be drilled to form a triangle which was then filed smooth to create a heart. My great contemporary Ernesto Colnago (and also Molteni mechanic although never together) developed his Ace logo this way as well

Pez: Thanks again its been a great experience and insight!

Ugo says:…It’s a joy to talk about one’s passion!

Get more info at the De Rosa website: www.DeRosa.it

Or check with the American distributor Albabici.com for a dealer near you.