Rider Interview: The older guys are still banging out the wins, but a new, young set is pushing its way into the pro peloton. Ed Hood asks “What next?” The answer could be a young man from Denmark – Andreas Stokbro, the recent winner of the Under 23 Tour of Flanders. Ed had to find out more from the ‘young gun’. 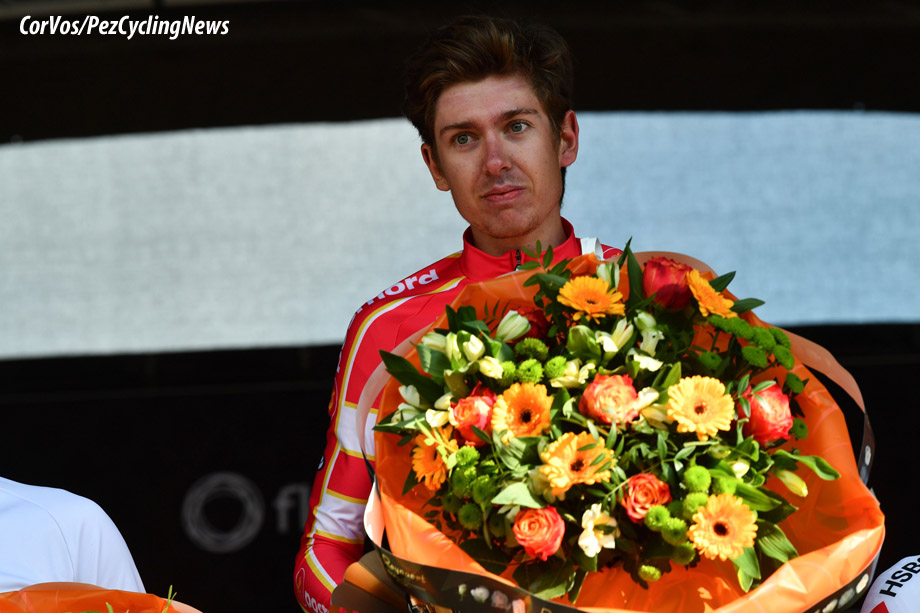 Alberto Bettiol, Wout Van Aert, Mathieu Van Der Poel, all part of the sport’s ‘New Wave.’ But who comes after them?

The best place to look is at the U23 Classics. Take the U23 Ronde Van Vlaanderen; Giovanni Visconti, Rick Zabel, Dylan Groenewegen and Eddie Dunbar have all won it in the past, with Sep Vanmarcke, John Degenkolb, Michael Mørkøv and Gianni Moscon all previous podium finishers.

This year’s winner was a familiar name if you follow the Copenhagen Six day; 22 year-old Andreas Stokbro (Riwal Readynez Cycling Team and Denmark) is a regular on the Ballerup boards with his 20 year-old Riwal team mate and compatriot, Andreas Kron. They were fifth this year, made a nuisance of themselves with the big teams and were always very rapid in the time trials. 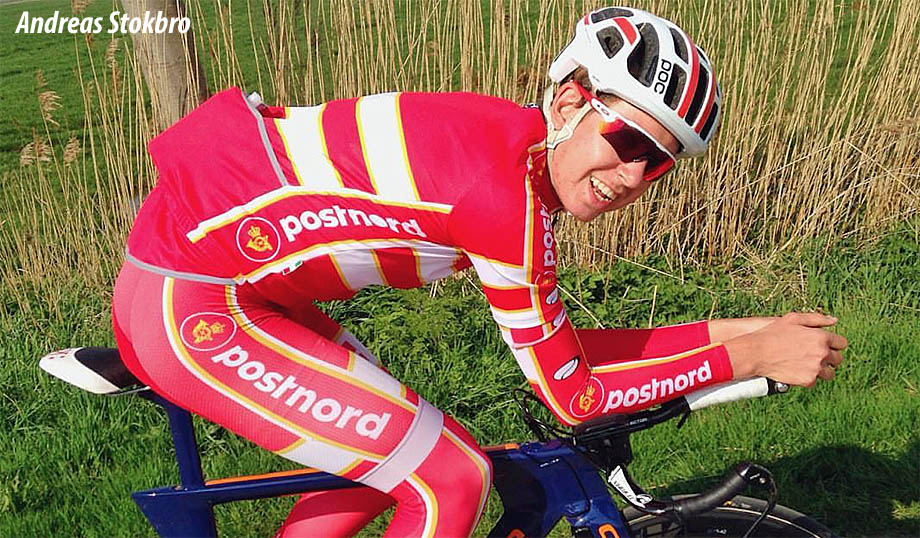 However, young Mr. Stokbro’s ambitions lay away from the pine boards and on the hard tarmac of Northern Europe albeit he first pops up on the palmarès websites as winner of the Copenhagen ‘Mini’ six days in 2011. By 2014 he was on the Danish junior national team and riding top ranked events like the GP General Paton in The Netherlands. In 2015 he won the Berlin Junior Six Day with Christian Nykvist Larsen and with Mathias Dahl Pedersen took bronze in the European Madison Championship. And that year also took eighth in the Junior Ronde Van Vlaanderen. He joined the Riwal team in 2016, took a stage in the ZLM Tour and was third in his U23 National Road race Championship. There was a full programmes of tough races such as the Kreiz Breizh in Brittany in 2017, a silver in the U23 Nationals and he just missed the GP Mountains in the Tour of Denmark. 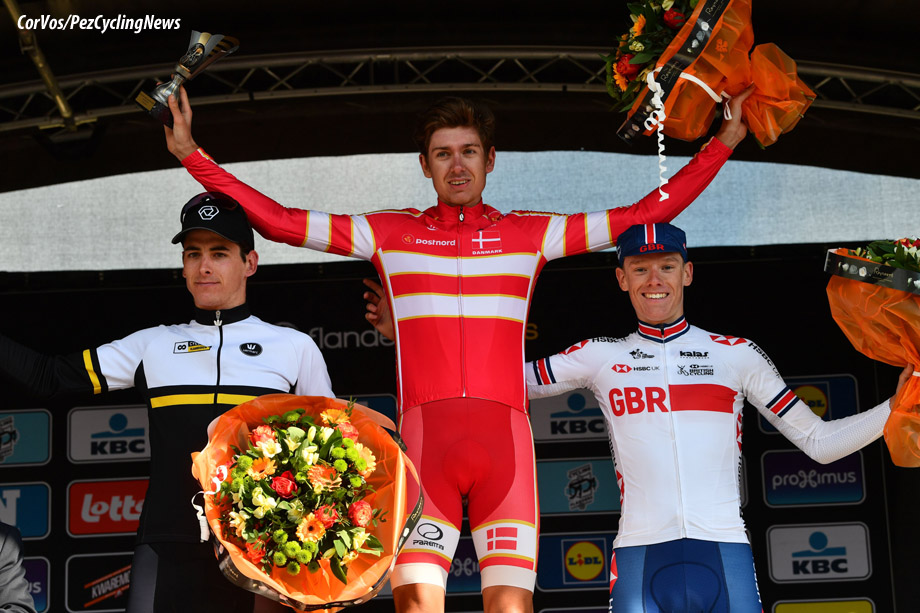 Last year saw him take a stage and second on GC in the Tour of Estonia, finish third in the U23 nationals and he was in the Danish team which won the TTT in the Tour de L’Avenir. This season Riwal have stepped up from UCi continental to pro continental and prior to the Ronde he had top 20 finishes in the Ronde Van Drenthe, GP Denain and U23 Gent-Wevelgem – no ‘soft’ rides there.

We caught up with him a day or two after his Flanders win:

PEZ: Congratulations, Andreas – talk us through your Ronde win please.
Andreas Stokbro: The race started out really hectic and a small group got away. We planned to wait until after the Geraardsbergen Muur, where my teammates Julius and Jacob did a really good job getting us in first on to the climb. After that the race entered a new stage, and there formed a breakaway with one of our guys in it – so we didn’t have to work in the peloton.

The race really starts at the Kwaremont and from there the big guys started to play out.
As we entered the circuit, GB rider Tom Pidcock closed the gap to the breakaway and we formed a new bigger group. Before the last lap he got away with my teammate Mikkel Bjerg in a three man group which I jumped over to on one of the hills. After a few kilometres of being a four man group, two Belgian riders closed the gap. We were caught again on the last lap and it turned out it would be a sprint – a 30 man group. Mikkel Bjerg [double u23 World Time Trial Champion, ed.] did a really good lead out for me and I sprinted to the win. 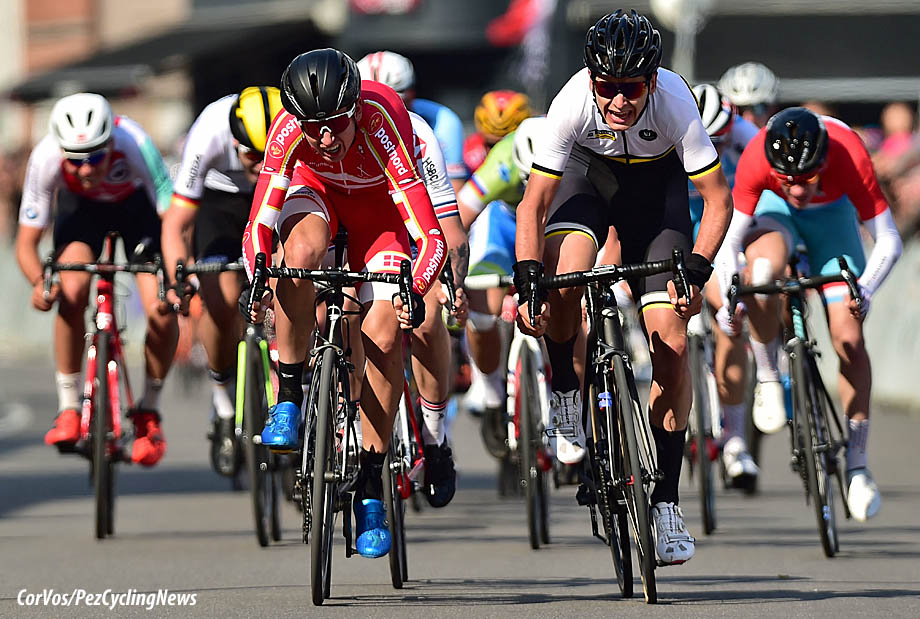 PEZ: Was the Ronde a big goal for you; a race you specifically prepared for?
Yeah it was a really big goal for me this year; one of the races I’ve aimed to do well in this year. 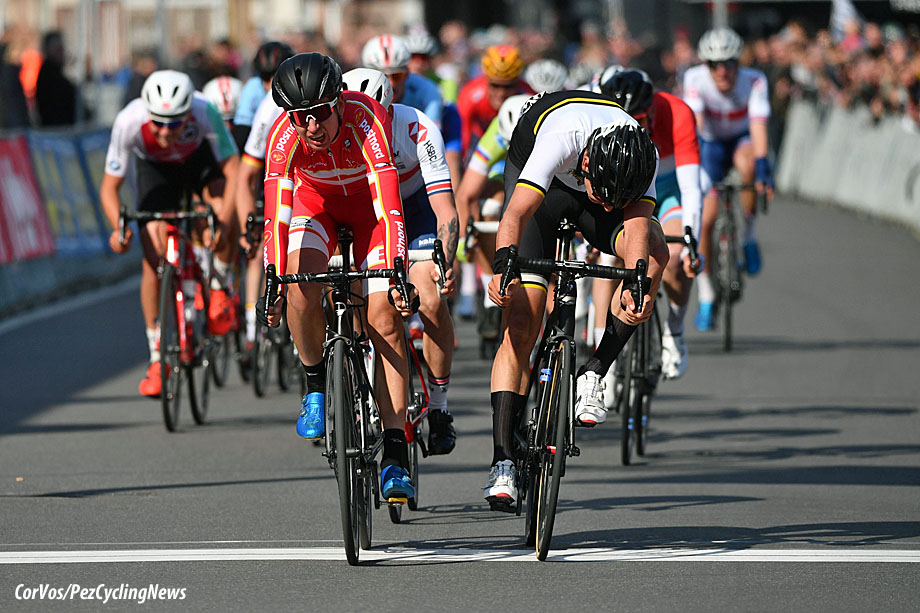 PEZ: How long have you been racing and how did you get into the sport?
I’ve been into it since I was eight years-old, my granddad who was also a cyclist himself introduced me to the sport. 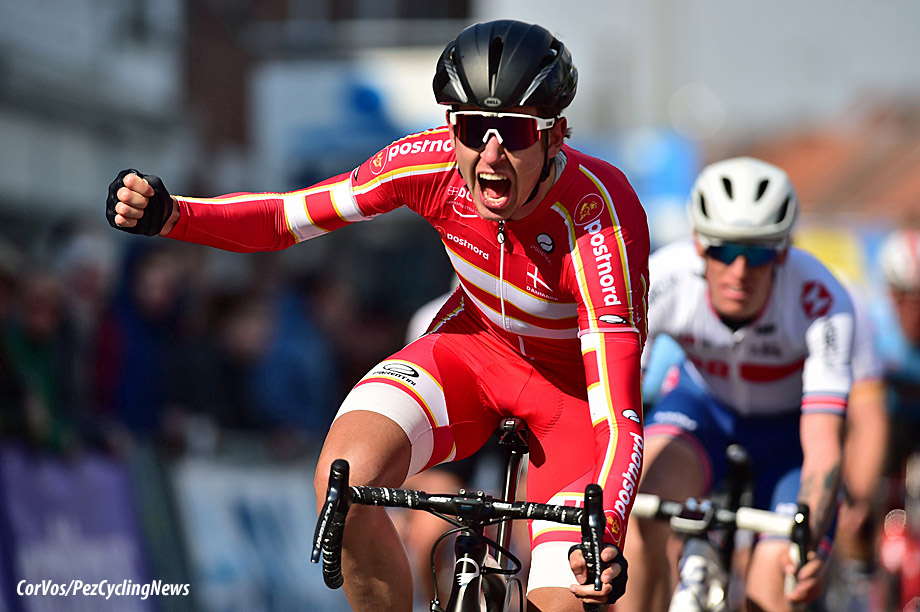 PEZ: How much of a change did it make to the team structure and organisation when Riwal went from continental to pro continental, this year?
For sure it is a big change for the team to go pro conti, the biggest change is the race program though, with us getting into much bigger races. 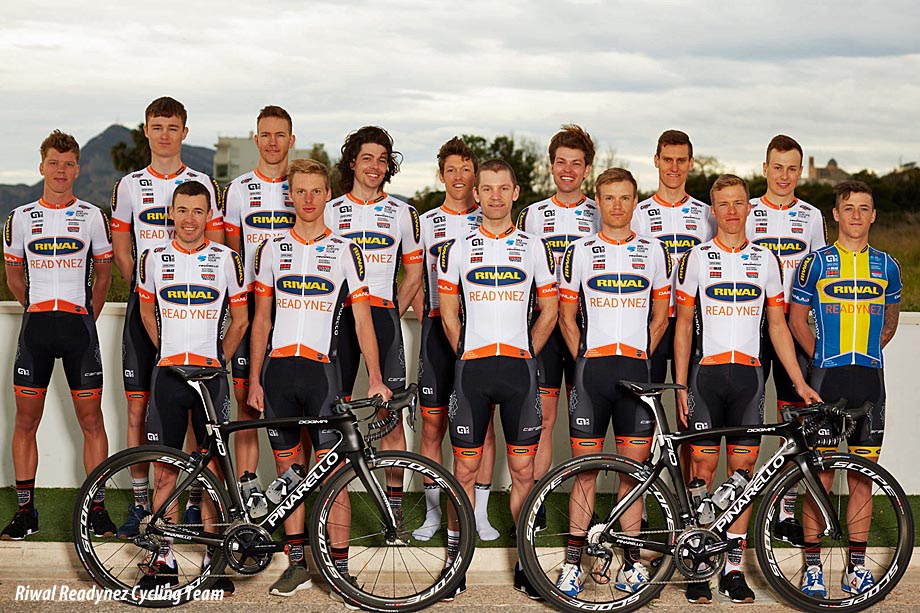 PEZ: Are you a full time cyclist with Riwal?
Yes, I am.

PEZ: It must be difficult for training with those cold, grey Danish winters?
Actually I like the Danish winters; I think it makes you a better cyclist when you are also able to train in bad weather. [echoes of Peter Van Petegem and Johan Museeuw there, they reckoned you won your classics doing the hours in the North, not on ‘soft’ warm weather training camps, ed.]

PEZ: Do you have a coach?
AS: Yes my coach is former professional cyclist Søren Lilholt, he won the E3 GP in 1990 and was World Junior Road Race and TTT Champion before that in 1983 – so he’s a very knowledgeable guy. 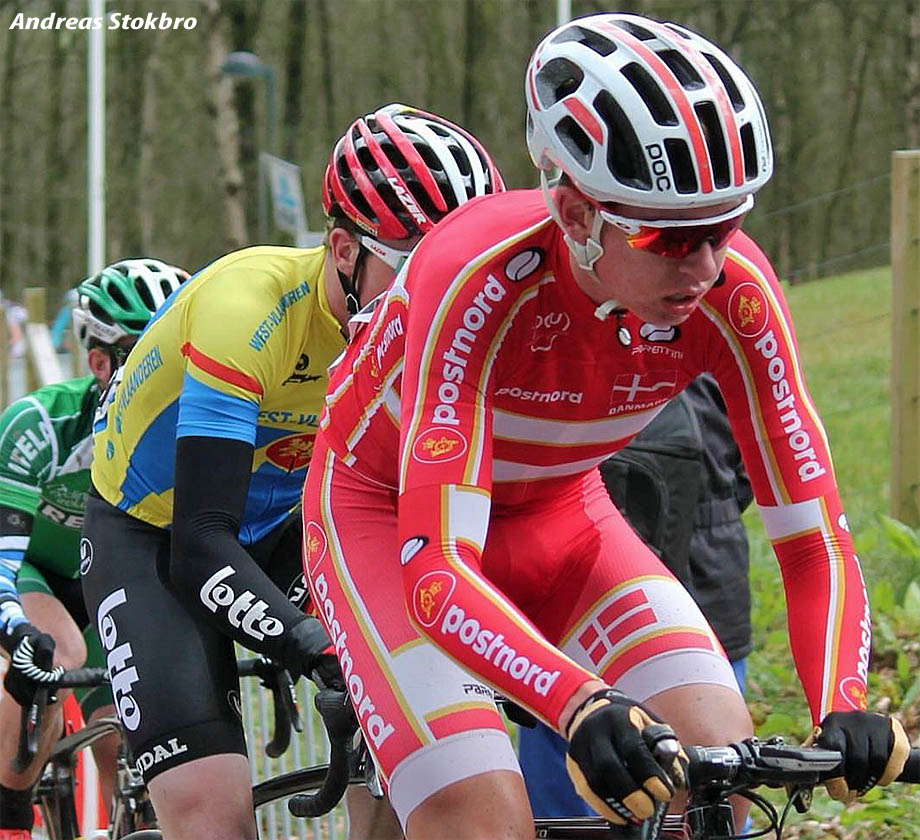 PEZ: Is the Danish Media supportive of cycle sport?
Cycling is really growing in Denmark, so it gets a lot more attention now. 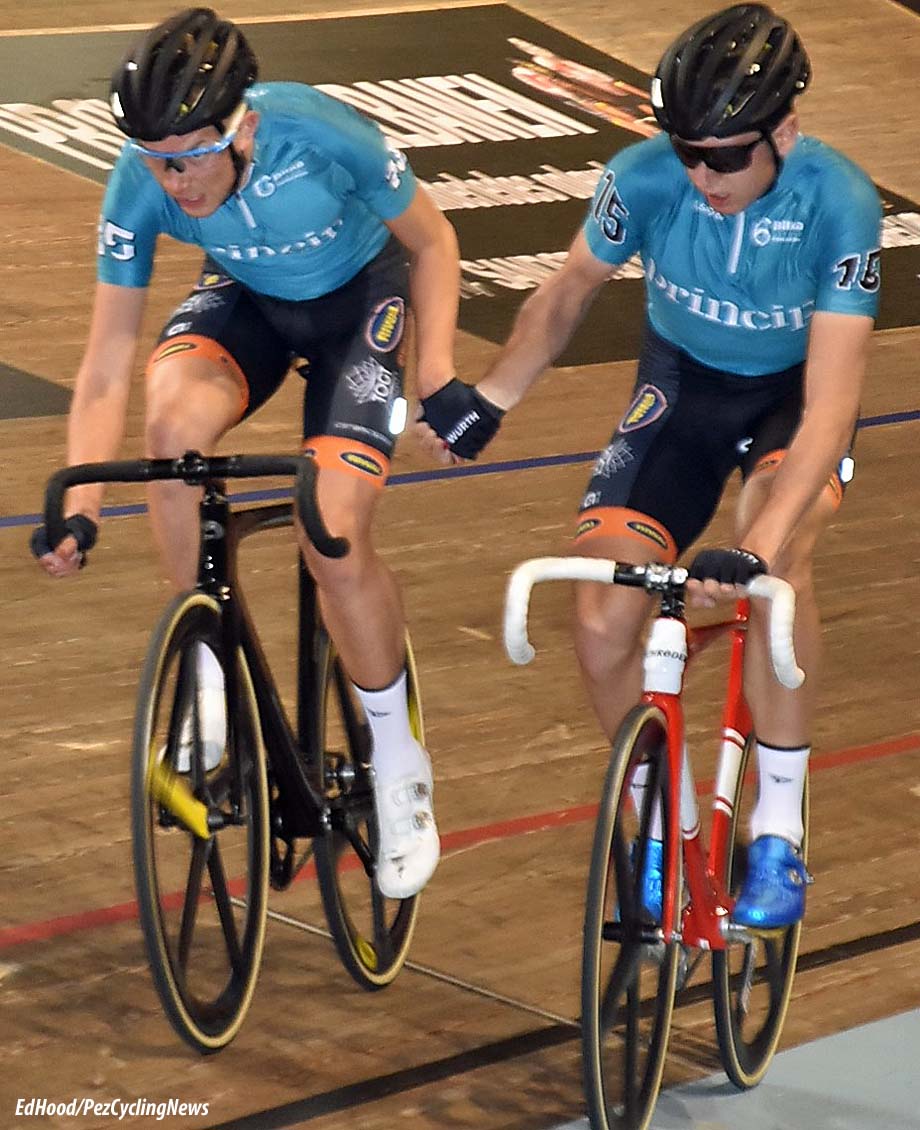 PEZ: How do you manage to fit the Copenhagen Six Day into your training for a road season?
AS: I’ve been using the six days as part of my road preparation for the last three years now, going on a training camp in January and finishing it off with the six days. Its super fun to do the six days on home soil, and you get some nice speed in the legs from it. 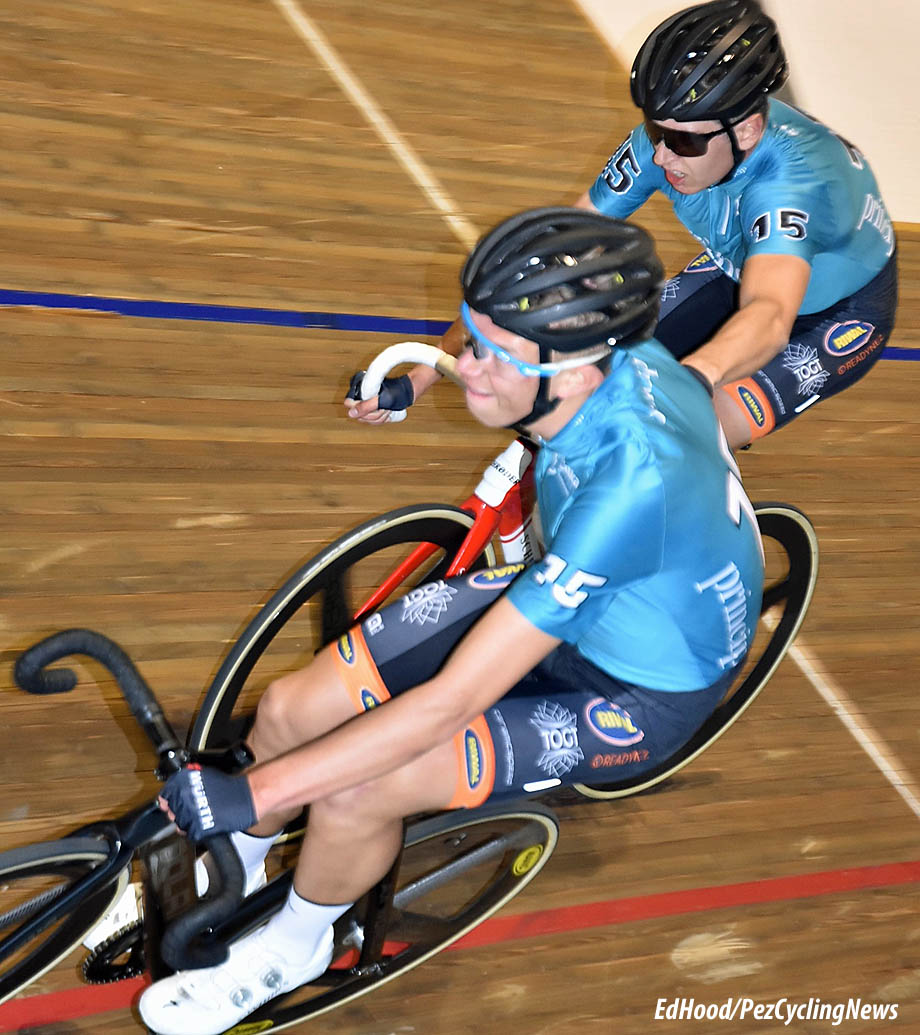 PEZ: Did you ever consider becoming part of the highly successful Danish track team?
With such a strong track team as we have in Denmark right now you will always consider it. But I think it’s more fun to ride on the road so that’s where my focus is.

PEZ: What’s the programme now?
The Brabantse Pijl in Belgium, the GP Finestre and Tro Bro Leo in France then back to Denmark for the GP Herning then over to the Tour of Yorkshire. 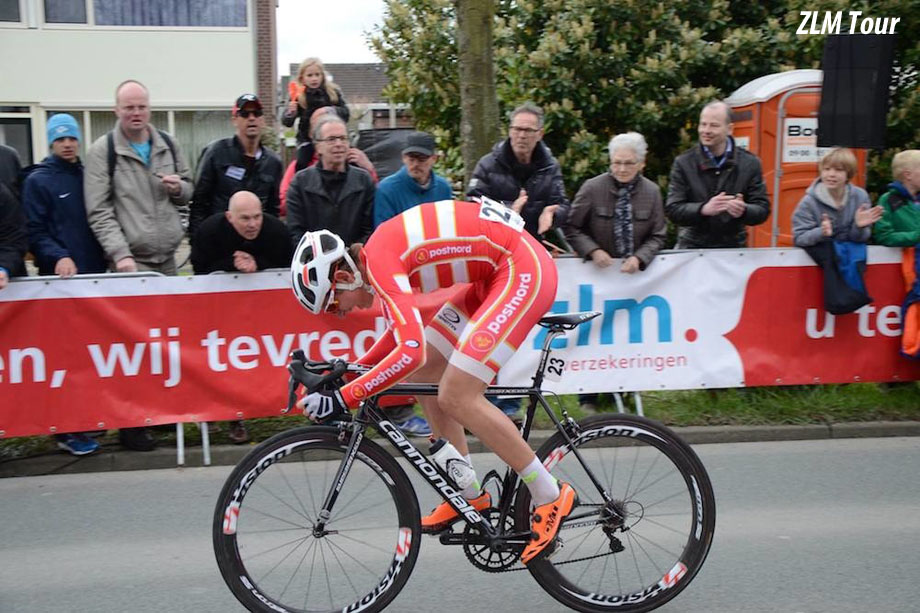 PEZ: What’s the long term goal?
This year my big goal is the u23 World Championships in Yorkshire, long term it’s to get on to the World Tour. 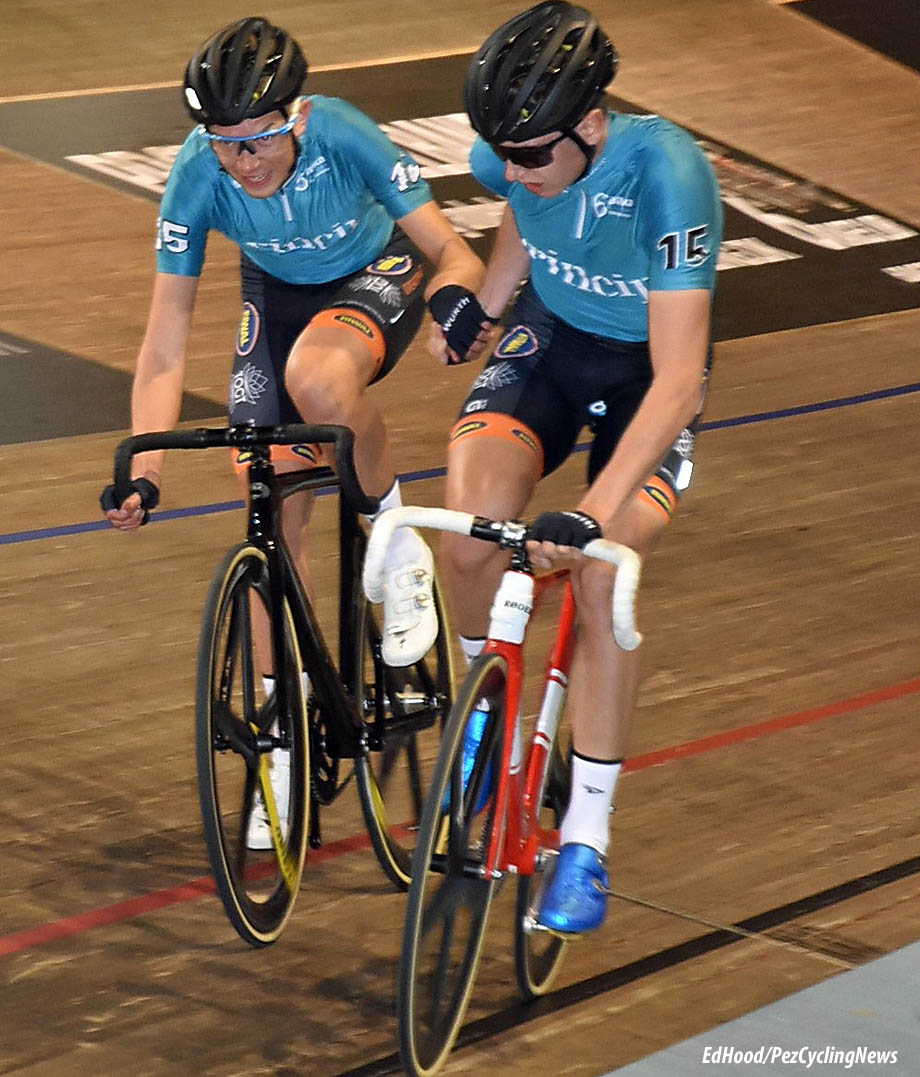