Up And Coming Brit Dan Fleeman Gets PEZ’d!

The GB track squad may have been making all the headlines; but there’s one other GB result that shouldn’t be overlooked amid the glare from all the precious metals on display in Beijing. Dan Fleeman’s win in the UCI 2.2 four day Tour of the Pyrenees was a quality ride and one which we felt merited a bit more attention.

PEZ: Congratulations on the Pyrenees win, Dan.
Dan: Cheers, it was a good result, Bernard Kohl and Frank Schleck have cut their teeth in this race in the past and it’s a good stepping stone to the next level.

I was fourth on the first stage, which climbed the Aspin, a break had been away all day and gradually they came back until there was just the guy that won the stage left.

I actually crashed with a few kilometres to go, I was taking a drink, not paying attention and I came off. I wasn’t hurt, I just got straight back up and finished fourth – I knew from there on that I only had three guys to worry about. 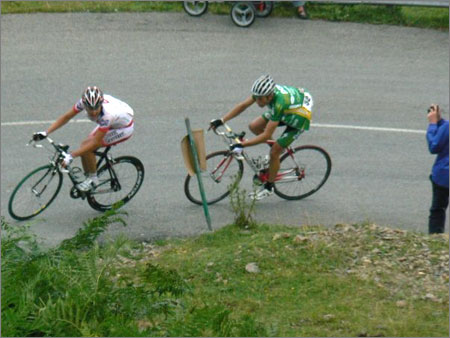 I wasn’t worried about not getting the stage, because I knew it would have meant a lot of pressure on the team. The next day, I took second on the stage and the jersey and that was it really; I was confident that my team [An Post – M. Donnelly – Grant Thornton – Sean Kelly team] could control things for the last two days and that’s how it worked out.

We won the Ras in Ireland with Stephen Gallagher and the Tour of Extremadura in Spain with Dan Lloyd, so the team knows how to ride to defend a jersey. Benny De Schrooder, for example, was Niko Eeckhout’s lead out man at Chocolade Jacques in 2007, so they are very experienced riders.

PEZ: You were British under 23 road champ in 2004, but since then your progress has slowed – until now?
Dan: It’s not as straightforward as that, I had a good 2005 with four wins in France. Then in 2006 I moved to a bigger French amateur team; I was riding in bigger races so it was harder to get results and my motivation suffered a bit, I think.

I signed with DFL for 2007 and that was a steep learning curve, all of a sudden I was riding UCI pro races, not French amateur races.

This year has been a good one, simply because I knew what to expect and how to prepare for it. 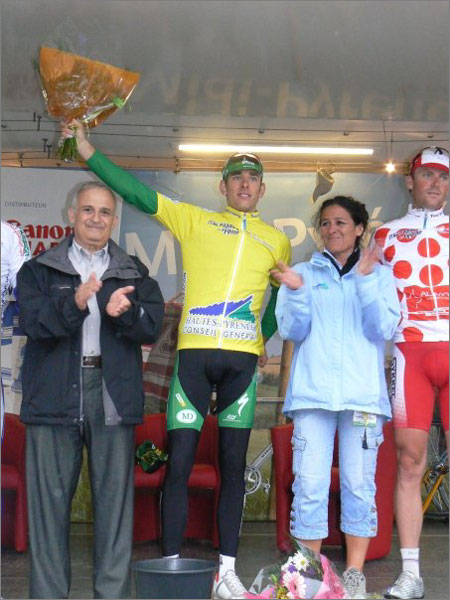 PEZ: How is your relationship with British Cycling?
Dan: I don’t really have one! I rode the worlds in 2004 after I won the British and I used to get on well with John Herrety (team manager at the time), but since then there hasn’t been much contact.

I contacted David Brailsford (GB team supremo) and said I’d like to be considered for the Olympics – because I knew it was a hilly circuit and it would suit me – so they should keep an eye on my performances.

I had to do all the chasing though, but they did eventually put me on the ‘Whereabouts’ system. You have to log on and note where you are going to be for one hour, five days each week, so you can be found for a drugs test.

I’ve kept that updated, but heard nothing back, although it’s not a bad thing for potential sponsors to know you are doing – it shows that you have nothing to hide.

PEZ: I believe you have a new coach for 2008?
Dan: I used to have a coach a few years ago, but this year I became aware of a website, www.TrainingPeaks.com which provides a full computerised training plan – you download the data from your SRM cranks into it. 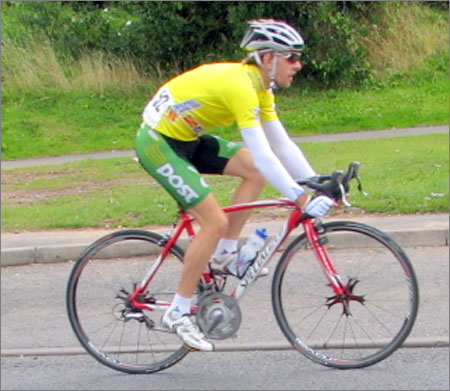 Fleeman is working with power guru Hunter Allen…and the hard work is paying off.

Hunter Allen is one of the guys who invented the software and he coaches me now. This winter, I changed my methods, with a lot more emphasis on intensity rather than volume. I still do four or five hour runs, but even if I do that kind of duration, it will incorporate interval work within it.

The training I did the weeks before the Pyrenees was much harder than actually riding the race!

PEZ: You seem to have embraced computers – your Facebook page could belong to Bill Gates.
Dan: I have my own website, but I really need to update it; I like computer technology, but I’m probably not as much of a ‘whiz’ as you think!

PEZ: Pyrenees apart, how has 2008 been?
Dan: It’s been good; we won the TTT in the Extremadura Tour and we worked hard for Dan Lloyd to win that one overall.

With two days to go, I had a bad day and unfortunately, so did the rest of the squad, we left Dan isolated and he could have lost it.

I was really annoyed at myself for letting him down, but on the last day I was really ‘stomping’ and I set a tough tempo on all the climbs so that no one could jump him.

I was proud of the way I rode that day and Dan was very grateful, he did a lot of work for me in the Pyrenees and I think that was his pay back for Extremadura.

I was riding well in the Volta da Ascension in Spain, too – I was third on one stage.

Apart from the Pyrenees, my best ride was probably 21st in the Tour of Belgium; all the Pro Tour guys were riding and on the hilly Ardennes stage, I was rubbing shoulders with Barredo and Geslink. 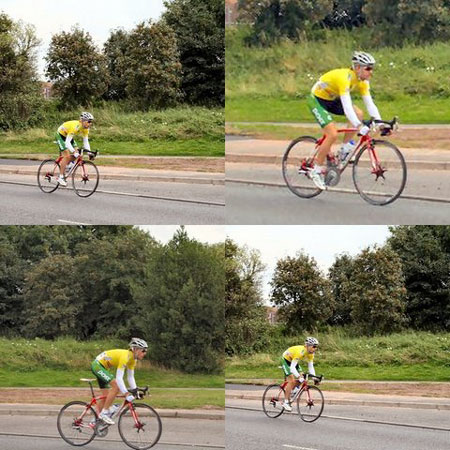 PEZ: DFL?
Dan: A very positive experience for me, I was treated well and I would have been happy to stay on under the Pedal Tech banner, but that imploded, unfortunately.

Some riders have complained about DFL, but Dan and I were happy, the race programme was first class.

Nick Collins was always good with me, I was always paid on time, in fact he paid me more than we originally agreed because he said I was riding at a higher level than he’d expected.

PEZ: Do you ever see Nico Mattan?
Dan: Yeah, I bumped into him at the Tour of Belgium, earlier in the year and he still looked fit, but he was wearing pointy shoes and a big leather jacket – he said it was his new image!

I met him just the other week and he’s gone really heavy – he always liked a drink!

He’s been on the Belgian equivalent of ‘Strictly Come Dancing’ – apparently he’s the worst dancer ever and he keeps getting voted off, but then they keep inviting him back because he’s so popular!

PEZ: Pedal Tech?
Dan: Nick decided that whilst he wanted to continue with the team, he wanted to stop putting his hand in his pocket and using his personal cash to fund the team.

He wanted to retain control of the team, but with sponsors putting up the money.

On a few occasions he had good sponsors lined up, but it always coincided with a big drugs scandal breaking and the sponsors took cold feet.

From July until the time it folded, the Belgian guys were saying; ‘we have a new sponsor, but it’ll be two weeks until it’s sorted out’ – but it was always two weeks away!

When the Pedal Tech guy appeared on the scene, Dan and I said that we should be careful because it was just a tiny bike shop – I have to be a little bit careful with what I say because it’s all still the subject of a police investigation.

The answer to that was that; ‘he has other business interests.’

I have to say that he was a very convincing liar, even though there was never any intention of him paying us, he was quoting sensible wages, not pie in the sky stuff.

There was a big warning sign, when the UCI refused the team a licence, the story is that they checked the guy’s finances out and could see the team wasn’t going to fly. 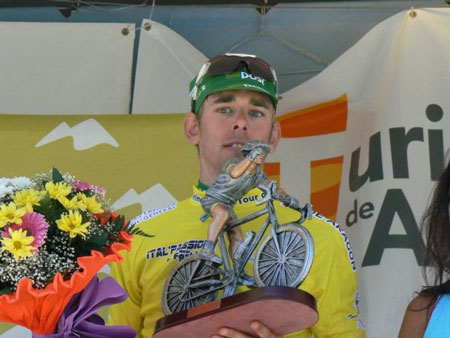 It’s a bit frustrating that they didn’t alert us, if that is the case.

I’m really fortunate that I have a good friend, Warren Bailey who has a big vitamin company, zipvit.co.uk – he was, and continues to be, very supportive of me, and it’s fair to say, if it wasn’t for his assistance I wouldn’t have been able to keep racing when the Pedal tech ‘melt down,’ came.

PEZ: How did you get the place with Sean Kelly?
Dan: Nick Collins and Brian Smith are friends and when Brian heard what was happening – that the Pedal Tech thing wasn’t going to go ahead, he contacted Sean Kelly and spoke to my manager, Martin McCrossan.

PEZ: How’s the set up?
Dan: Really good, it’s a small team, but they try to be small and do it properly; they don’t think they’re QuickStep!

We’re not lacking anything – we all have our two or three bikes – and it’s a good race programme. 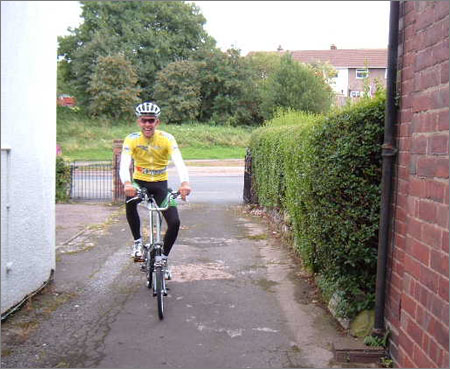 PEZ: Do you stay at the Sean Kelly house?
Dan: Yeah, but only four or five times, the majority of my races are outside of Belgium, so I stay at home in England between races, then fly to wherever we’re riding – we ride a lot in France and Spain.

I’m more suited to stage races than one day events in Belgium.

PEZ: The rest of 2008?
Dan: I’m riding the Tours of Ireland and Britain; then there are few hilly, late season, single day races that I’ll probably ride.

The Tour of the Pyrenees really suited me, I like the high mountains, but generally it’s only the big teams that get to race in the big mountains.

Apart from anything else, officially you’re not meant to discuss any moves until September first, but Pez will be one of the first to know!

With thanks to Dan for his time; we’ll be hearing more from him during the Tour of Ireland.