Rider Interview: An American winning a professional ‘6 Days’ is quite something, but a US team to win the ‘6 Days’ of Moscow is stunning. Ryan Oelkers and Marty Nothstein did just that in 2002. Ed Hood spoke to Ryan about his historic win and his track career.

The 2021/22 six day program may be heavily truncated thanks to the pandemic but we thought you might like this piece of ‘race to nowhere,’ nostalgia from two decades ago. . .

Cleveland, Ohio, 1949 and when Charles Bergna and Cecil Yates hoisted their bouquets over their heads little did they know that it would be more than 50 years before another US pairing would do the same thing. It was Bergna’s third win in Cleveland, his final career total was five wins; Yates was more prolific with 16 wins — but it was the end of the Golden Age for US Six Day riders.

It was Moscow in 2002 before the Stars and Stripes would fly for both riders at the end of a Six Day race — for 2000 Olympic sprint champion Marty Nothstein and Ryan Oelkers. On the twentieth anniversary of their win we thought it would be good to remember our chat with Ryan, a decade ago, about his historic but largely overlooked win. 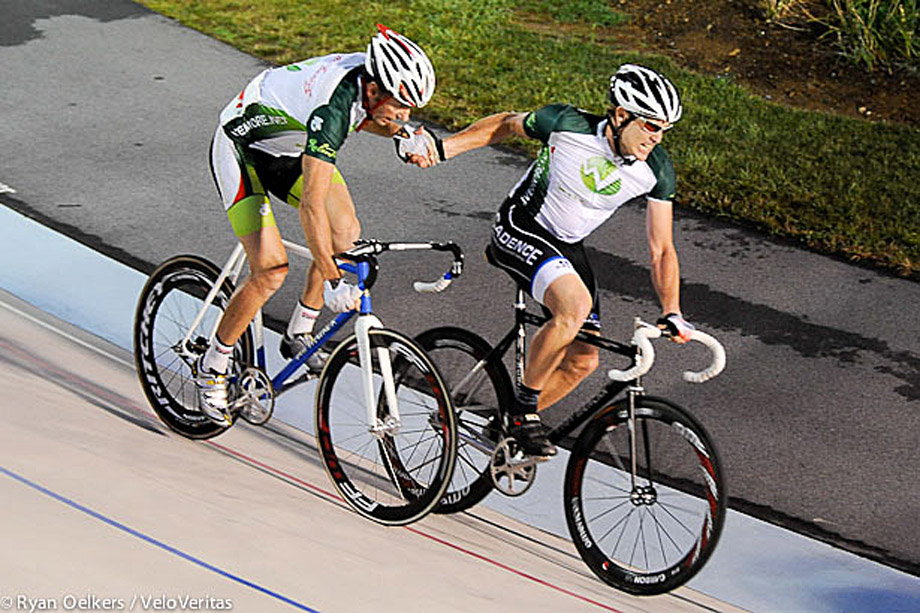 PEZ: Moscow 2002, your first pro Six Day and your first win – how did you get the ride?
Ryan Oelkers: Marty Nothstein made the transition from Olympic gold medal sprinter to endurance rider and was on the 6-day circuit that fall. I was working for a law firm that represented athletes (including Marty), but was laid off after the firm shut down their Athlete Representation Group. At that point, I had ridden some amateur sixes previously and quite a few madisons with Marty. Since I didn’t have a job at that point, I really had nothing to lose so I started training full-time again with the goal to race in Moscow with Marty. It was appealing to the organizers to have an American team in there – especially in Moscow – so my uncle, former professional cyclist and Olympian, Jack Simes, spoke to Henrik Elmgreen, the organizer of the Moscow Six Day (who was also the long-term organizer of the Copenhagen Six Day), and got me a start with Marty. 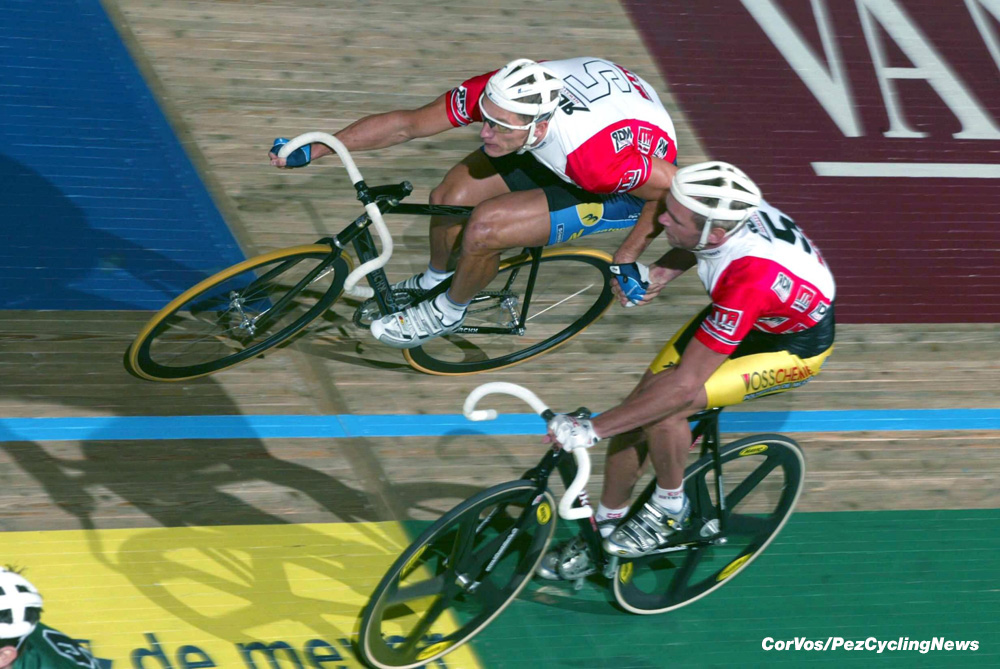 Marty Nothstein with Jimmy Madsen in the Gent ‘6 Days’ 2002

PEZ: What was the racing like – it must have been tough to win against the likes of Marvulli?
It was hard since I didn’t have any racing in my legs and hadn’t been on the track in ages. However, we had a few things going for us. First, Marty was in terrific shape and was extremely motivated to do well. Second, the actual track is enormous (333 meters), especially for an indoor track – the size of the track made it easier to follow the teams. It would have been different racing if we were competing at Ghent 6-day, which is only 165 meters in length. Finally, it was a month after the previous six day, so some of the riders probably lost their track legs. It was great winning with Marty in Moscow especially against top riders such as Franco Marvulli and Alexander Aeschbach. In addition to those two in Moscow, you also had the likes of Frank Corvers, Lorenzo Lapage, Gerd Dörich, and even a young Iljo Keisse.

PEZ: The Moscow track – one of the fastest in the world.
Yes, the track in Moscow is pretty amazing. It was built for the 1980 Olympics and is still in fantastic shape. It’s definitely one of the fastest tracks in the world – it’s pretty rare you see an indoor track that size (333 meters) – most are 250 meters or smaller. The size and steepness of the track bankings are impressive too. In fact, during introductions on the last night of Moscow, the Czech team crashed in front of us and I hit one of the riders as he was sliding down the track. Due to the steepness of the track, I never landed on the track banking – I just hit the apron or flat part of the track. The impact was so hard that I thought I had broken my hip and to make matters worse, Nothstein ended up using me as a pillow to brace his fall thus knocking the wind out of me! To this day, I still have a large bump on my hip. In fact my wife, Erin, calls it my third ass cheek; it’s a nice memento from Moscow. 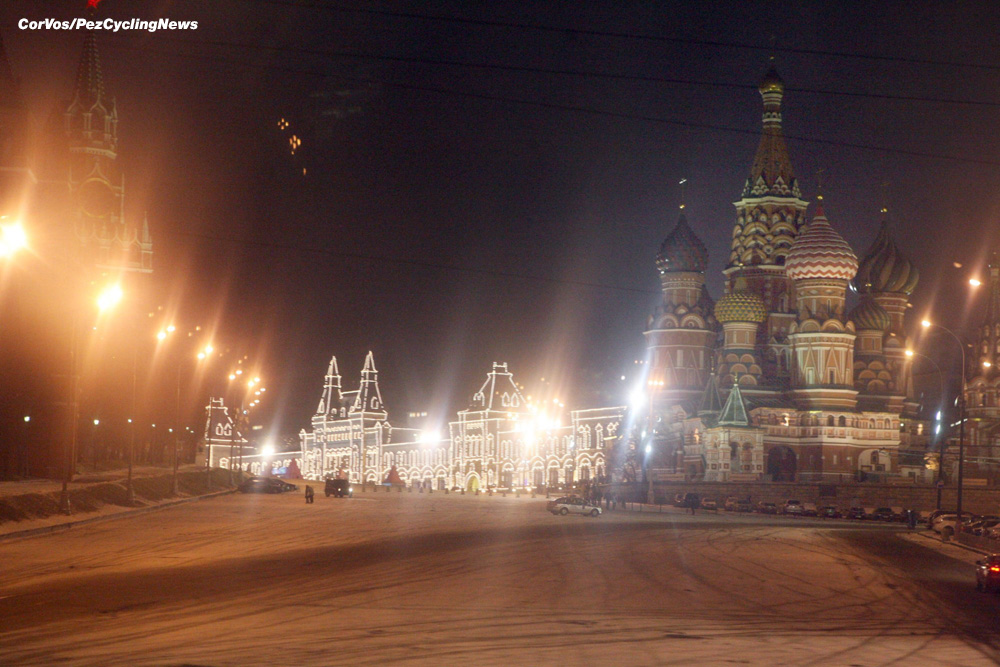 PEZ: I heard it was brutally cold?
Moscow was extremely cold and grey. One day during the event, the race organizers took all of the riders and staff down to Red Square. It was frigid; that side trip into Moscow was the only time we went outside during our trip since our accommodations were at the track. The rest of the time was spent eating, sleeping, training, and racing at the velodrome. 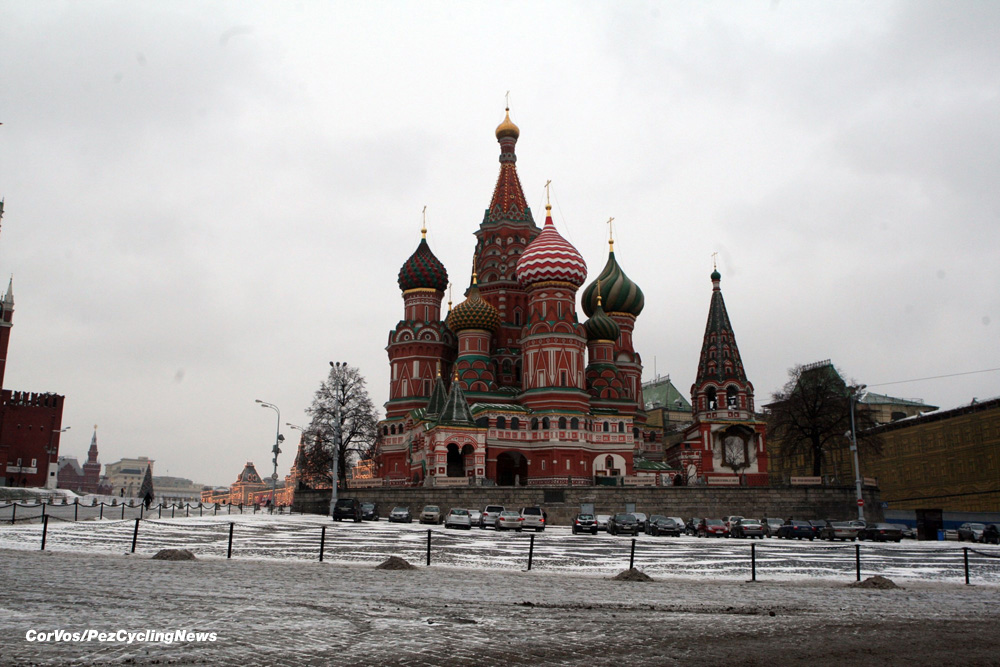 PEZ: Did the media pay much attention to your win?
Our win was unique because it was the first American win in a European Six Day in over 50 years. It was covered by much of the cycling media; uiv.dk and the other cycling sites and publications. 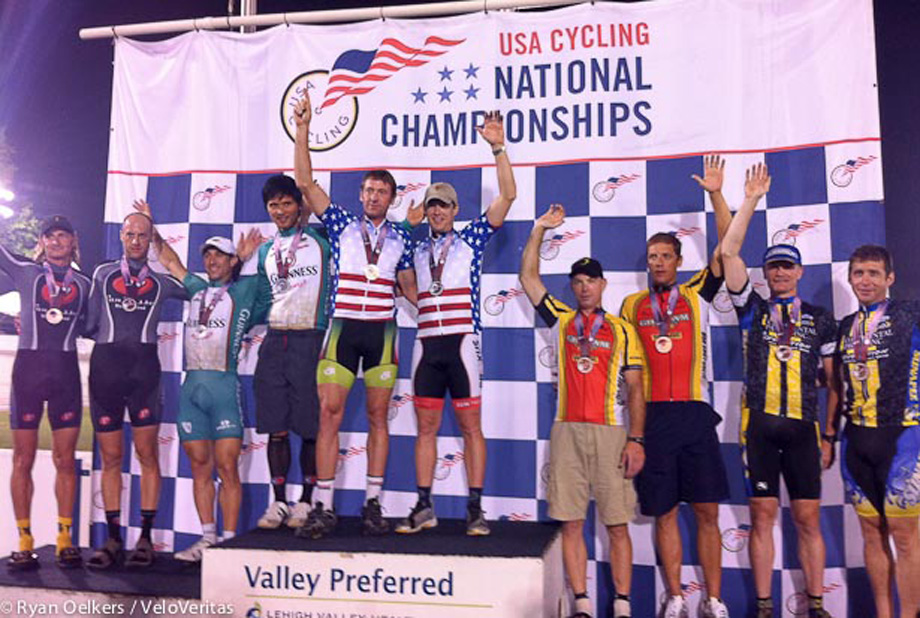 PEZ: Did you ever think about what you were going to do when you stopped racing, your six day career was short lived?
I was always planning and thinking about what I was going to do after I stopped racing. While I was still competing as a professional, I decided to go back to school to get my undergraduate degree at Kutztown University. It was probably one of the best decisions I could have made – to have that college degree to fall back on once my racing career was finished. That decision to finish school probably gave my parents a few less grey hairs as well. I felt a huge sense of accomplishment by earning that degree while still racing at a high level. 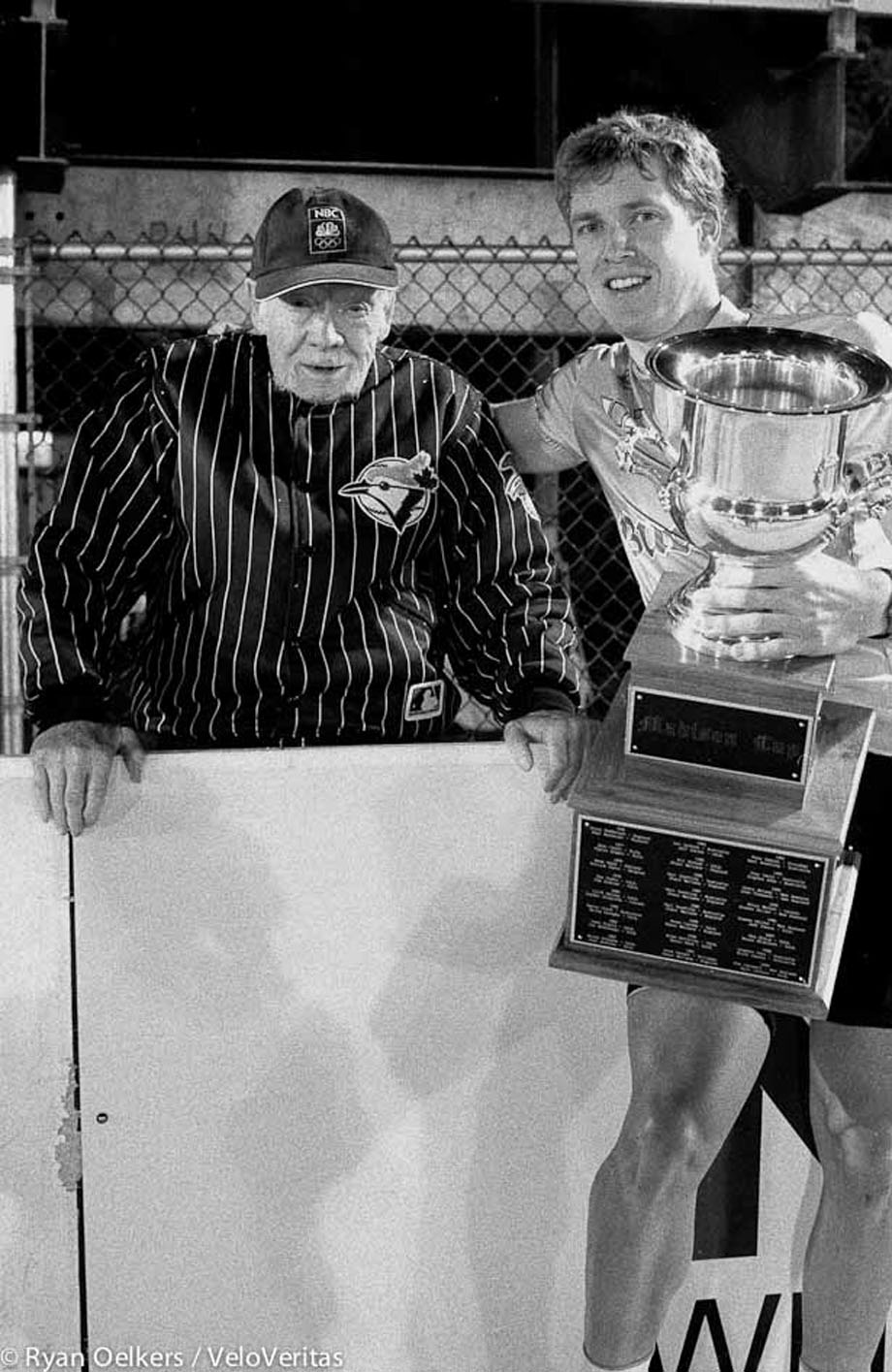 PEZ: Moscow apart, which career ride are you most proud of?
My first Madison Cup win at Trexlertown with New Zealander, Tim Carswell. The Madison Cup is one of the most prestigious track events in North America and it’s been held for more than 35 years. It was one of the first track events I ever saw and immediately I was drawn to that style of racing. I set a goal of winning that event even before I got into competitive cycling. I just saw it and knew I wanted to try to win the Madison Cup someday. By my second day of riding the track, my uncle Jack was already teaching me madison hand-slings. 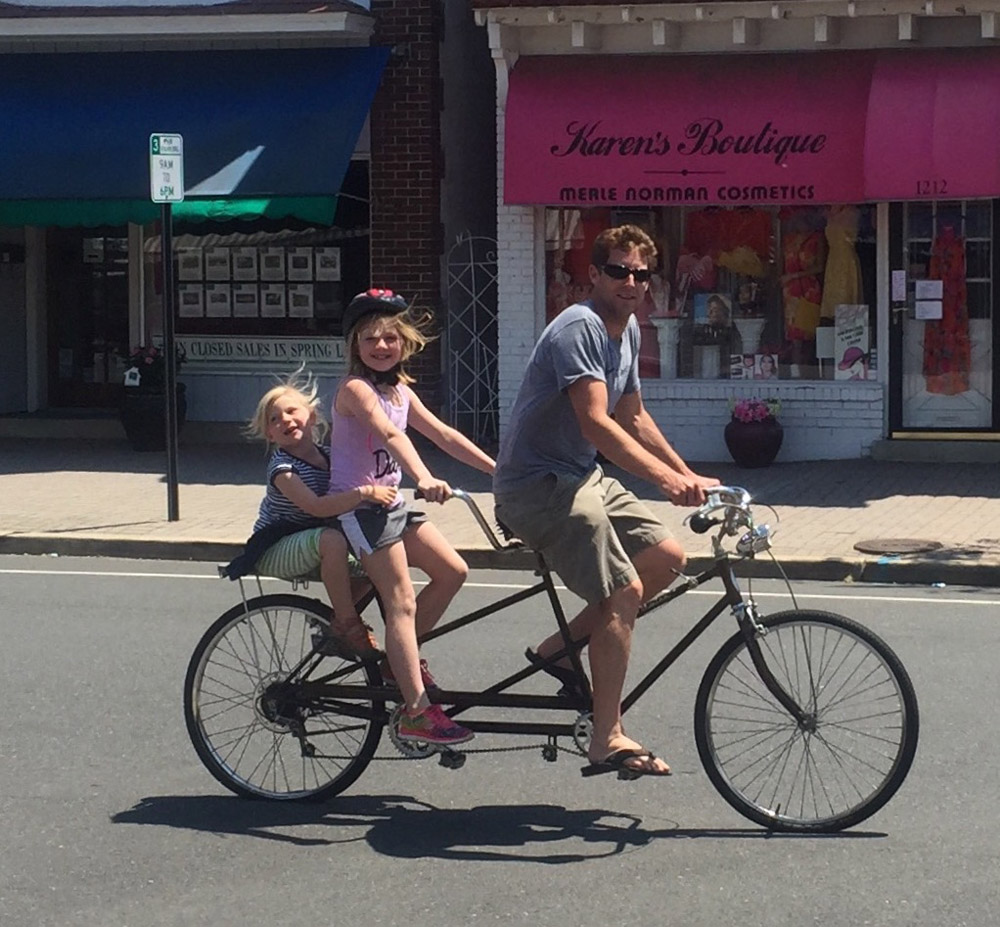 PEZ: And with the benefit of hindsight. . . ?
I wouldn’t have changed a thing. I’m a pretty lucky guy who was able to see the world, make lifelong friends, and have a career in the cycling industry all because of this incredible sport. 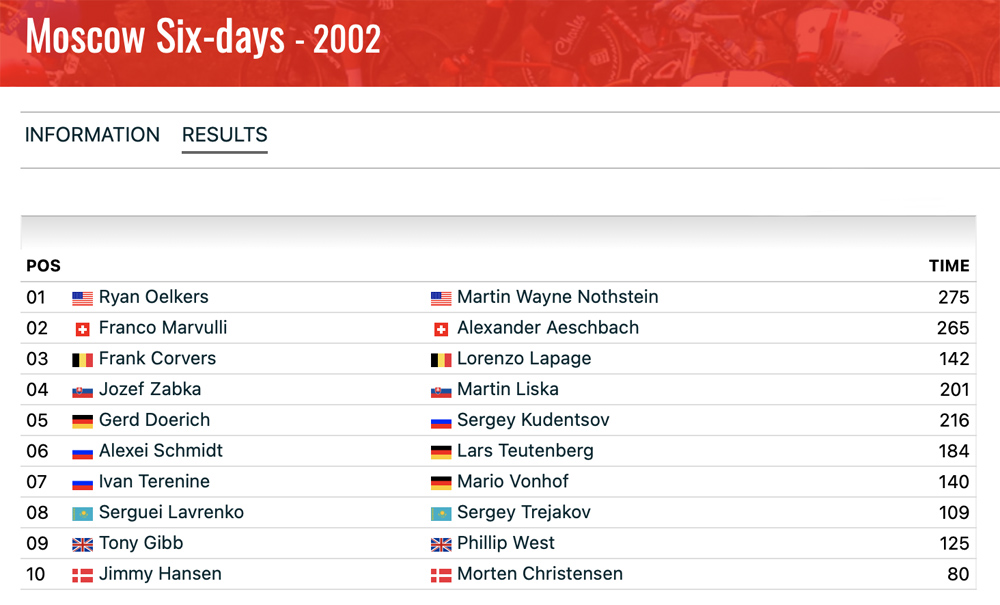