Rider Interview: The Axeon Hagens Berman team has seen a lot of promising young riders, but Greg Daniel has shown more than promise with wins in the U.S. National road championships and overall in the Tour de Beauce. Ed Hood managed catchup with the flying youngster to hear his views on those wins and his future.

The next US road star?

We have a feeling it may be a young man called Greg Daniel; another product of the Axel Merckx school on the Axeon Hagens Berman team.

Whilst the Euro national champs take place the weekend prior to the start of the Tour de France the US version is a week or two earlier and young Mr. Daniel shocked the World Tour teams to take victory. Not content with that he followed it up by winning Canada’s tough Tour de Beauce – high times we ‘had a word’ with this gentleman. . . 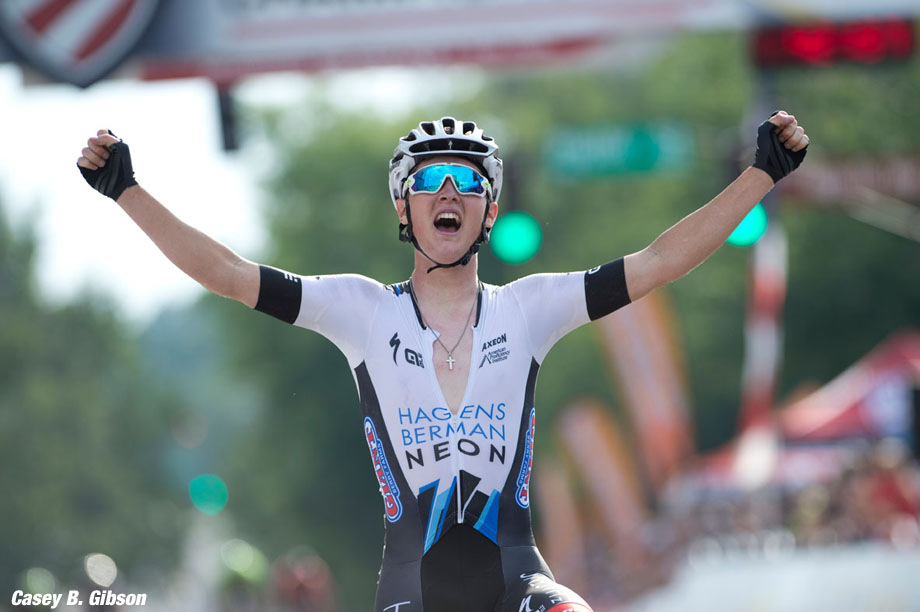 Greg Daniel soloed to the biggest win of his career at the U.S. national professional road race championships

PEZ: What was your game plan going into the national championships, Greg?
Greg Daniel: Since we only had two riders, the plan was to save Logan Owen for the final with me covering the moves that went up the road. 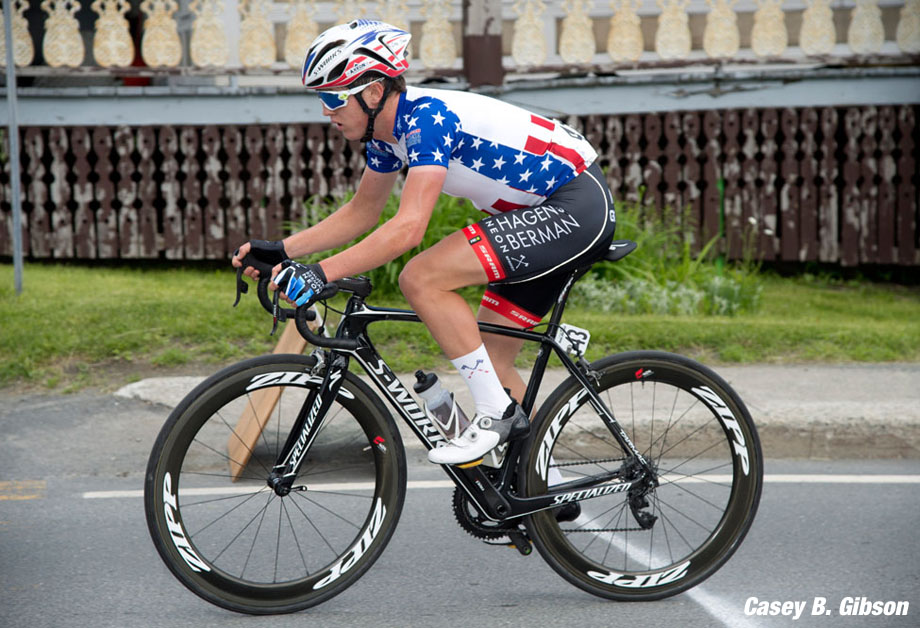 PEZ: Just two of you in the race – that narrowed the options.
Yeah, since we only had two guys, it took a lot of the responsibilities of controlling the race off of us. First, there are only two of us, but also we are just a development team. I think we are viewed as the underdogs going into it, so it gives us a little leash to try something. 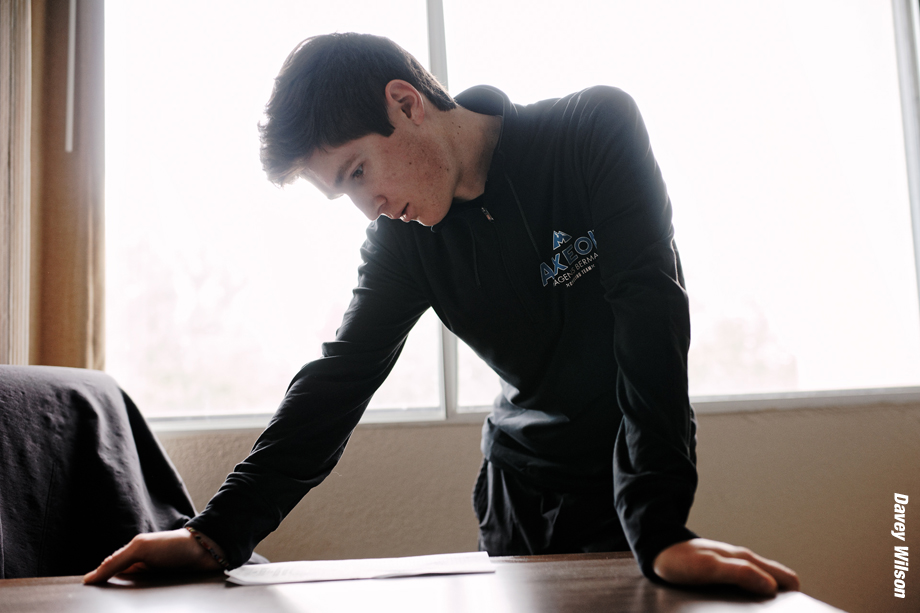 PEZ: Tell us how the race unfolded and how you won?
I got into the early break but wasn’t originally feeling too great. I made sure to do as much work as everybody else, but no more. However, we had a few riders who wouldn’t pull through. I didn’t mind much when it was just a rider or two not pulling, but soon, everyone’s manager was telling them to sit on. Soon it was just me and two others rotating – which killed the move. As we were caught, a flurry of attacks came and I covered as many as I could with Logan. The next few laps seemed to fly by, and with one lap to go, Logan got in a move with one other rider. This gave me a nice break in the last lap. As we came into the final 10 kilometers, I slipped off the front with a group of five others. We weren’t organized at all, but I don’t think any group at that point had much organization. People were letting gaps open, playing a game of poker to see who would close it. But I wasn’t really too interested in that. In my mind, I was happy with a top five so I wasn’t upset to go to the front or close a few gaps.

Going into the last climb, I saw Oscar Clarke hit it on the climb, but was expecting a counter attack. I watched the shadows behind me sway back and forth, looking for one to come screaming up from behind. It never came though, so with about 100 meters left on the climb, I decided to accelerate and see who would come with me. I kept looking in the shadows to see who would follow. But no one ever came up. I didn’t want to look back because I was afraid to see a large group chasing me down, but eventually I overcame that fear and allowed a glance back, only to see a few riders far in the distance. I was shocked. At that point, I realized I might be able to win. But that’s also when I was thinking, “Did I go a lap too early – Was this the last lap, or did the heat of the day trick me and did we still have another lap to go?” But when I got close to the finish line, I saw there were 0 laps to go and 0 on the clock, which made me the happiest man on earth. 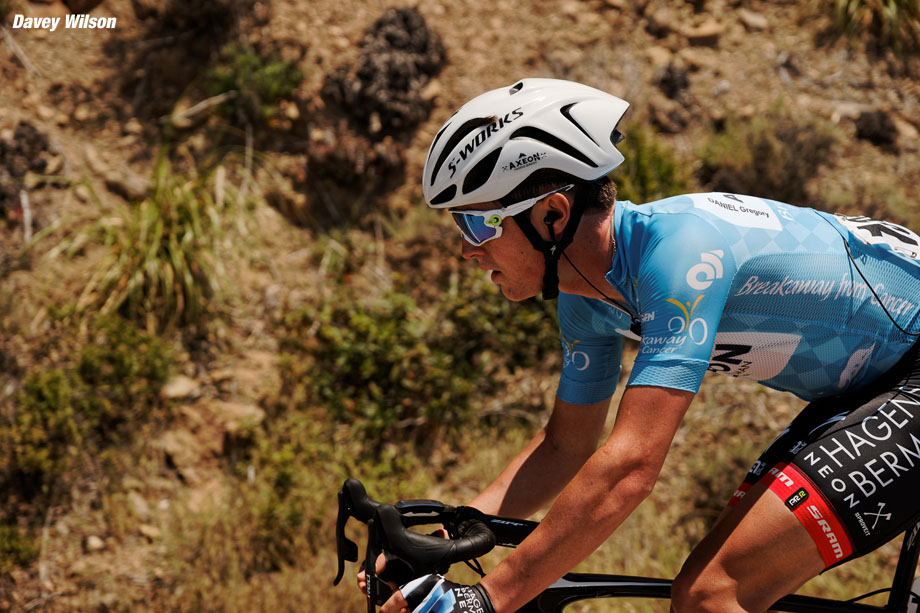 At the Amgen Tour of California, Greg Daniel was one of several Axeon Hagens Berman Cycling Team riders making solo breakaway moves late in stages. The Under 23 development squad went on to finish a surprising runner-up to the BMC Racing Team in the team standings

PEZ: I believe you weren’t sure you’d won?
Going into one lap to go, I knew it was the last lap. It was clear. But when I attacked and was actually off the front with a chance to win, I was like, “No way. This isn’t happening. I can’t really win USPRO Nationals, can I? I’m only 21.” The whole thing was so unexpected. I was doubting something like this could actually be happening. Two weeks ago I wasn’t sure I was even doing this race. Now I’m off the front with a kilometer to go? It was surreal. Words couldn’t explain my emotions on the finish line. It was the best day of my life.

PEZ: Bookwalter, Reijnen, Busche – some BiG names behind you
Those guys are all amazing riders. To race against these guys is just an honor. These are the best riders in the United States, and some of the best in the world. To be able to say I’m the U.S. national champion is still such a surprise. I’m honored to say the least. 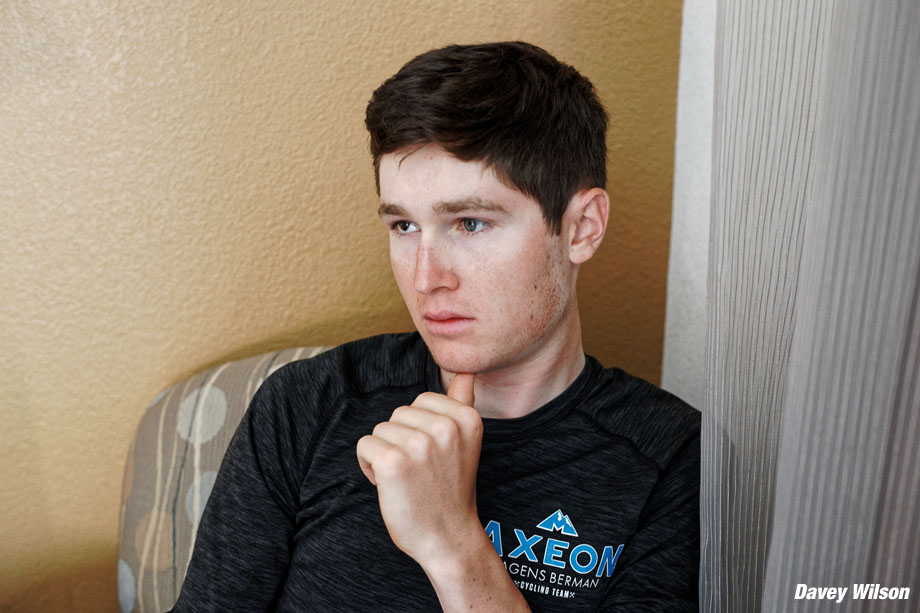 Until this season, Greg Daniel was best known for his breakaway prowess

PEZ: How did you get into cycling at the start of it all?
I began on Memorial Day weekend fittingly enough. That’s when my mom bought my first road bike. I wanted to do a triathlon at first since my uncle has done the Ironman on two occasions. But I immediately fell in love with riding. The places it got me and the speed. I was hooked.

PEZ: How did the Axel connection come about?
At the UCI world championships in Maastricht in 2012, Bontrager-LiveStrong’s soigneur, Reed McCalvin, was there and talked to me about the team. Then I spoke to Axel that week and was fortunate enough to be able to get a contract.

PEZ: You were second in the U23 US title race in 2015 – any ‘what ifs’ on that one?
I don’t regret anything in that race because it was all a great learning experience. I was alone for a majority of that race in a solo move so I think that’s just a young, amateur move on my part. However, the race played out well. I finished second to my teammate at the time Keegan Swirbul who rode very strongly to take that win – I was very proud of him. 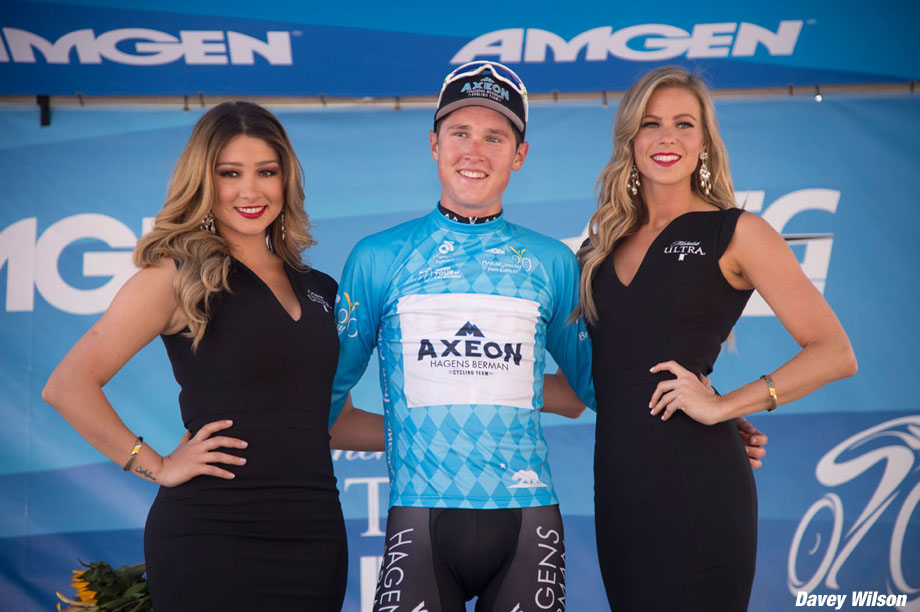 PEZ: This year: do you think it was California set you up nicely for the Nationals.
I think this whole spring set me up nicely for the national championships. I got very ill in Portugal with a gastrointestinal virus that made every race a battle just to finish. I was lucky enough to have the opportunity to keep racing for USA Cycling, although a part of me felt like I was letting them down. I trained so hard for a great spring campaign in Europe only to get sick. I kept faith though and believe that everything happens for a reason. I came back from Europe healthy and went into California riding well. Then, I think I was so rested from the relatively light spring campaign, I was able to have a great ride at Nationals, and carried that form nicely into the Tour de Beauce.

PEZ: Things just kept rolling at the Tour de Beauce. What were your ambitions going into that race?
Going into the race, I felt like I could maybe have a good GC chance. However, I somehow got into the breakaway on the first day. It wasn’t planned, but I was able to finish second in that stage and get a nice chunk of time in the GC that carried me into yellow for the remainder of the race. 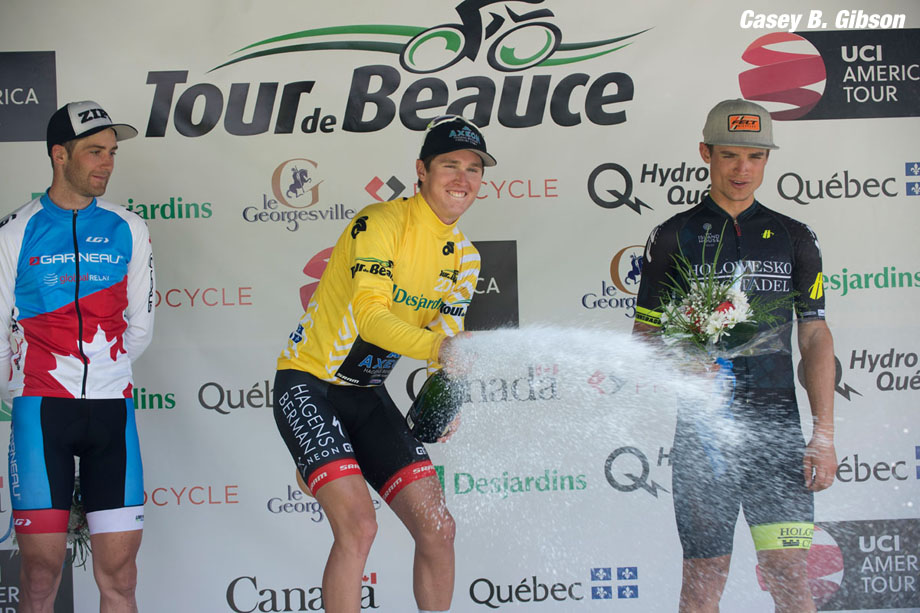 PEZ: In the end, you won the overall and the last stage and three of the four classification jerseys – are you still pinching yourself to find out if it really happened?
That was an amazing week to say the least. The whole team rode their hearts out for me, which was something I have never experienced before. I haven’t been the team leader before, so to have that was really special. Every one of my teammates was so selfless. And to finish it off with winning three jerseys and the last stage was awesome. To have so much success in just three weeks has been incredible. I am thanking the man upstairs for every second of it. 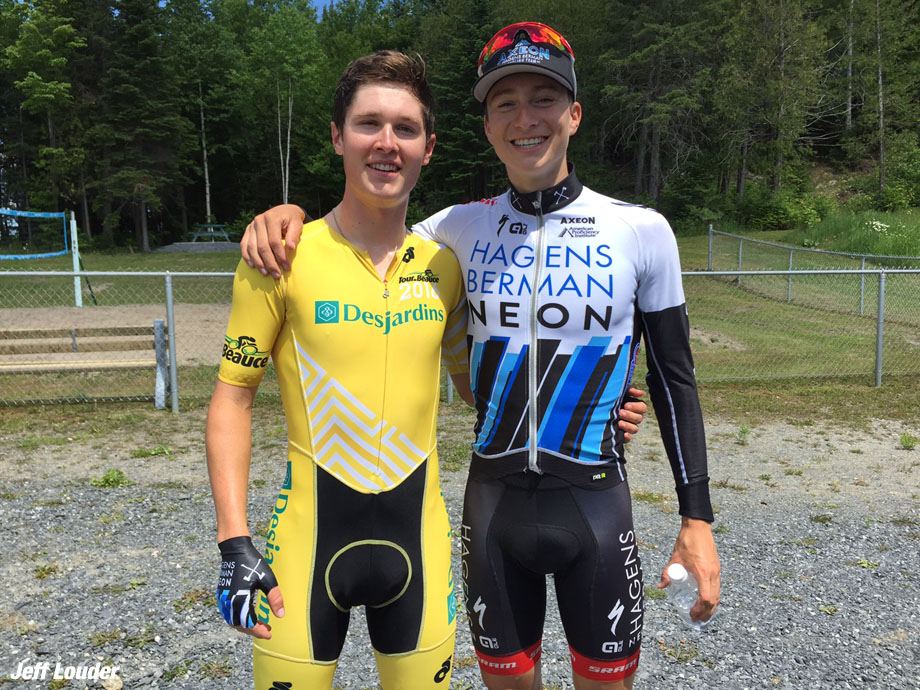 PEZ: What is ahead now for you – that champion jersey and a UCI stage race title are nice calling cards. . .
I am talking with a few teams at the moment, which is such an honor. For eight years, I have been dreaming of an opportunity to race on a World Tour team, so I hope and pray that that will be an opportunity. But honestly, just to be able to race my bike for a living is a dream come true.

PEZ: And if you could win just one race, it would be. . .
I feel like every cyclist would answer this, but the Tour de France. 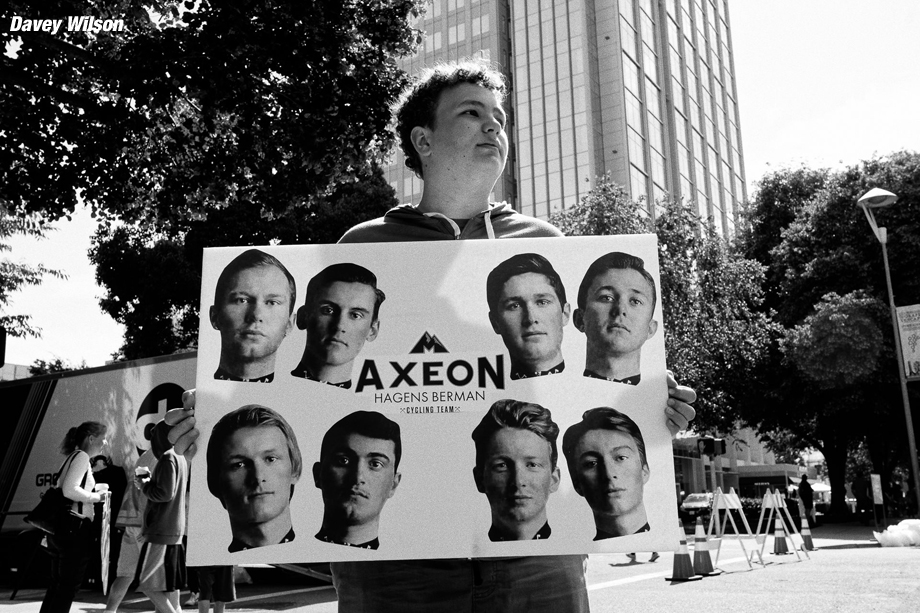 Support for the American Axeon Hagens Berman Cycling Team has been growing rapidly due to the team’s success. Already, the squad has won more than 20 races this year

Many thanks to Sean Weide for his help with the interview.

Tour preview with All Nine Riders