Rider Interview: As the cyclocross season builds to a climax with the World championships on January the 29th in Bieles, Luxembourg; the National championships last week gave us a clue to who is on form. In the US, Stephen Hyde took the national title, but it wasn’t all plain sailing. Ed Hood got the story from the man himself.

Pre-race favorite, 29 year-old Floridian, Stephen Hyde (Cannondale-CyclocrossWorld) stuck with the form book, Sunday past in Hartford Connecticut grabbing the US Elite Cyclocross Championship by the scruff of the neck at the half way point to go solo over the snow and ice to what seemed was going to be a comfortable victory. But there was late drama as Hyde’s rear gear mech dangled in the breeze and a rapidly softening tyre meant hard charging Jamey Driscoll (Clement) was but two seconds behind at the line.

We caught up with Hyde a day or two after his win. . . 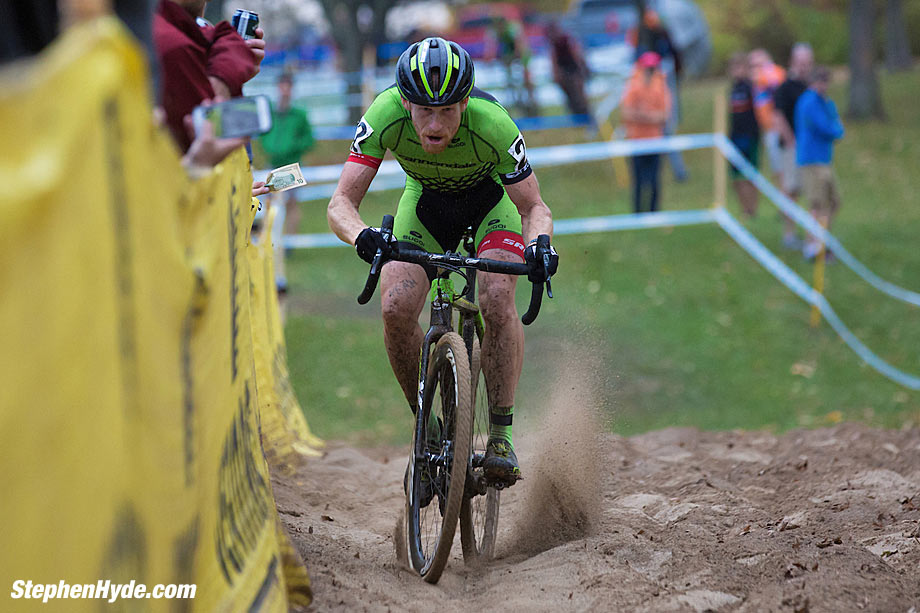 PEZ: Congratulations Stephen, first up, tell us what happened to have that rear mechanism flapping in the breeze at the finish!
Stephen Hyde: Oh man! Well, it appears that metals do not like EXTREME cold. Unfortunately I slipped on the off camber section before the finish and the particular way I hit the ground just snapped the hanger. Nothing any one could have done about it, except maybe I shouldn’t have fallen!

PEZ: And a late puncture?
I’ll be the first to admit that I never thought that I had that race in the bag. With the conditions as they were and how close the other riders were to me, any slip up could be fatal. So, I knew from the beginning that Jamey would be the one to challenge me and I never kept him out of my mind there. So when I saw that he was coming up pretty quickly I knew I needed to rip some sections pretty hard. Unfortunately I hit a frozen bump or rock and got a case of the slow leaks. I didn’t realize it until after pit two . . . uh oh! 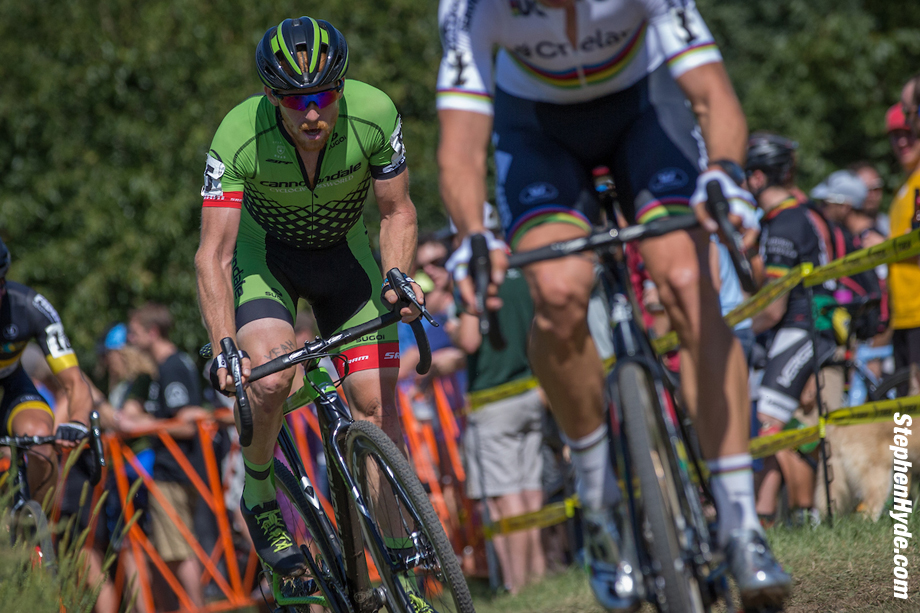 PEZ: What was the pre-race strategy?
It was clear early on in the day that you needed to be the first over the big off camber in order to have a shot at clean lines and to not get caught up in traffic. There were very little line choices throughout the entire course so one could get big gaps early if they had a clear shot. Unfortunately that slipped away from me halfway up the climb.

PEZ: The course looked chopped up pretty bad – ironic the Elites get the worst of that as last starters.
Sure, it was pretty bad. But if you look back day to day throughout the week, we all had our own race challenges. You have so many races and so much variability in weather in New England and of course the time of year. Sometimes we actually get the better conditions. So, win some, lose some. You just have to race the course you’re given and learn to be adaptable. 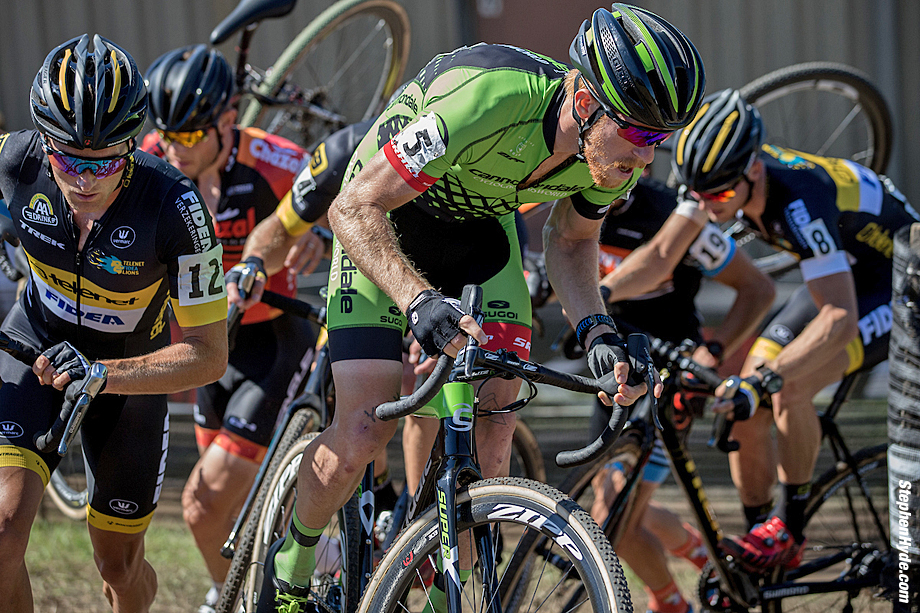 PEZ: Why the bike change at half distance?
So, when we started the race it was a tad wet from the direct sun light and with a start like that you have to prepare to not have as much control over your line choice as you want. So, I went with the Challenge “Baby Limus” tire. It was plenty fast and had enough traction if I got pushed into the loose white stuff on the edges of the lines. However, a few laps in I could tell that it was drying up and freezing over more. There was a lot less snow and a WHOLE LOT more sheer ice. So I switched to the “Dune” file tread tire – lots more traction and much more predictable on ice.

PEZ: Did you feel the cold in all that snow or is there too much adrenalin?
I actually took a lot of time to determine the warm up and clothing I would use for that race. It’s always a battle between getting opened up enough to race hard and not seating too much so you get frozen after warming up. I wore a thermal Sugoi skin suit and thermal leg warmers. I put some heat packs on top of my toes and used cotton gloves. I also had a complete spare of everything on the line. So, no I wasn’t cold – except my fingers got a little frozen on the tips from putting my hands down in the snow. My left hand is still a little numb – some minor frost bite, I guess. 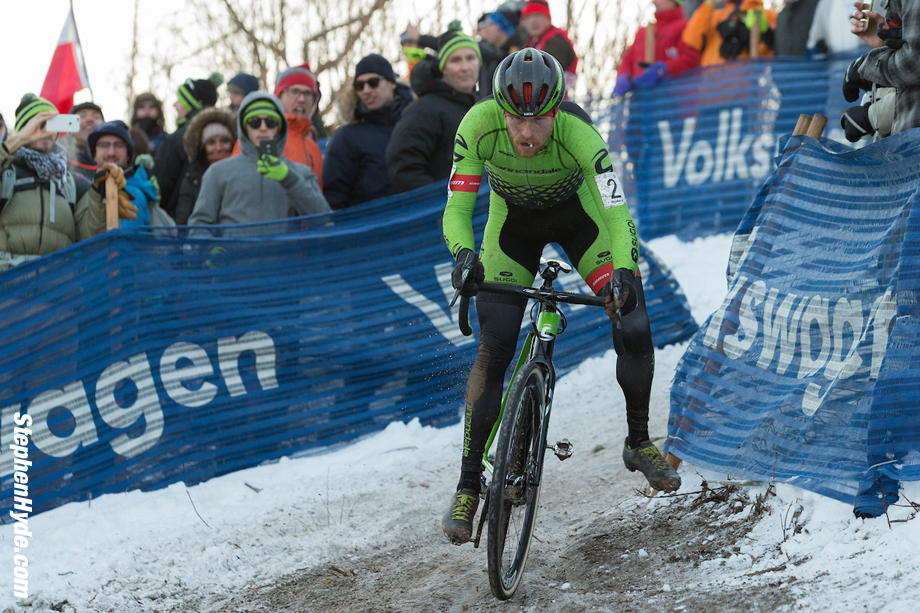 PEZ: Did you have much hassle with ice in your cleats?
Oh certainly. No one was safe from that. Unless of course they were super wizards and never put their feet in the snow!

PEZ: Were you surprised that defending champion Jeremy Powers didn’t put up more of a challenge?
Yes and no. I knew he would be on great form and I know he has a ton of fight in him. But I also know those kind of conditions just don’t suit him well, unfortunately. I would love to have had him to battle against but there was plenty to do already without him. 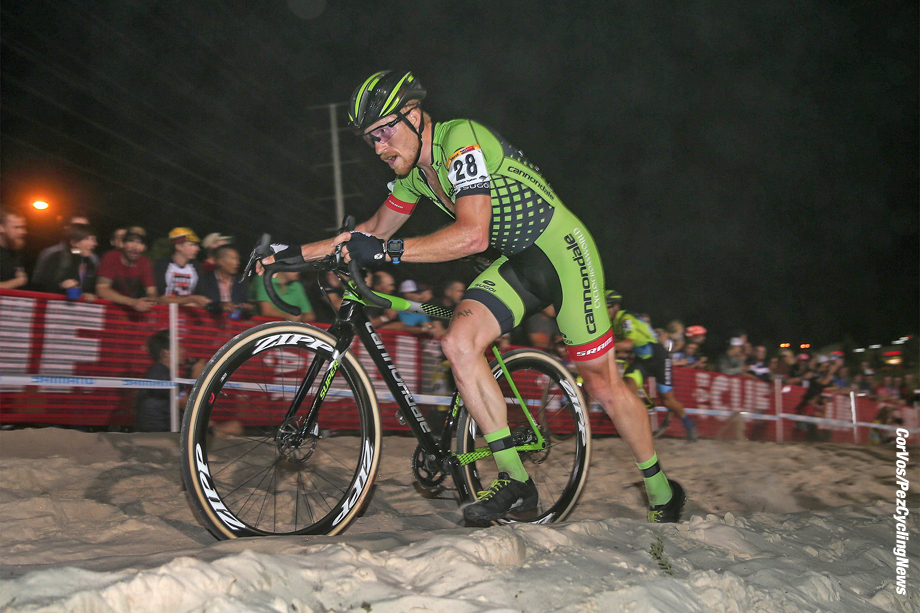 PEZ: Driscoll was charging late – were you worried?
Oh absolutely, like I said earlier, at no point did I count him out. In fact, it’s exactly how I expected that race to play out. Best and worst case scenario. A course like that takes patience and a real smooth throttle and of course, super good slick riding technique – he has all of that.

PEZ: Discs must have been a big advantage on that parcours?
Disc brakes are an advantage any time one needs to slow down, period. A course with ice requires that you use a little brakes as possible or if you do the last thing you need is for them to lock up. 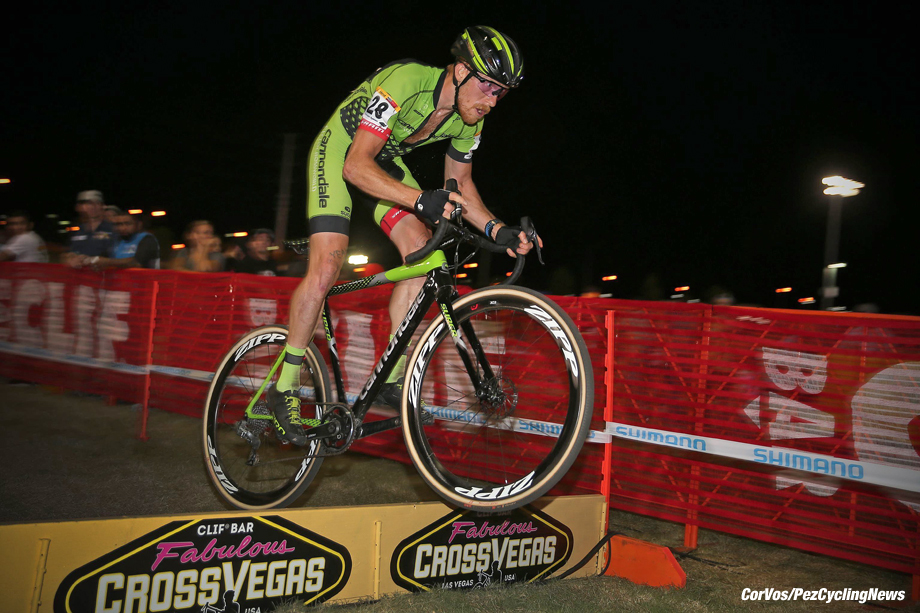 PEZ: And you’re on 40 x 1 x 11, why do you favor that over double chainrings?
I made the switch to 1X a few years ago and honestly wouldn’t consider going back. Not for cross anyways; it’s simple and easy to maintain in those conditions.

PEZ: And non electronic derailleur?
There are two CX riders in the world on SRAM eTap and I am neither of them. Cables work fine for me but who knows about the future. 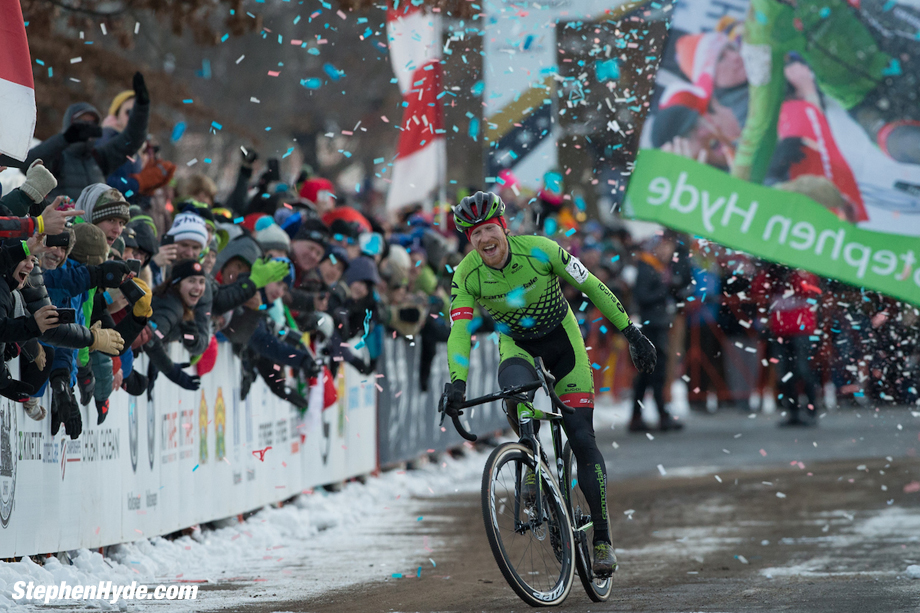 PEZ: How was the post-race celebration?
It’s Wednesday as I write this and I am opening my computer for the first time and it is unreal the out pouring of support I have seen. I’m thrilled. I’m also still a little hung over.

PEZ: How did you get into ‘cross to start with?
In Florida actually. It just really caught my eye as a best of everything I love about racing bikes. I fell in love real quickly, never looked back. 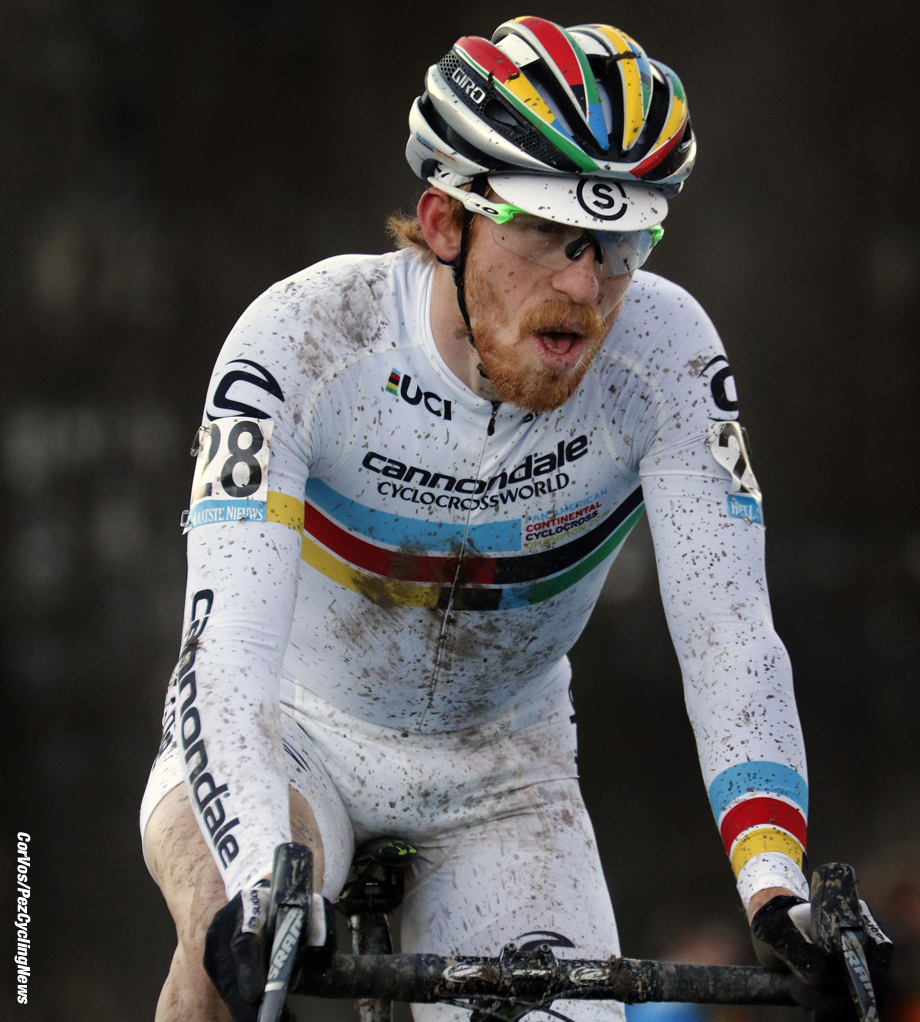 PEZ: And you’re Pan Am champion – is there much representation from South America?
I am, yes and real proud to take both jerseys. No, there really isn’t at least not on the men’s side of the sport. Maybe it’s a little too warm?

PEZ: Europe – what’s been your best result?
Spa-Francorchamps, the Superprestige in December where I was 10th behind Van Aert. 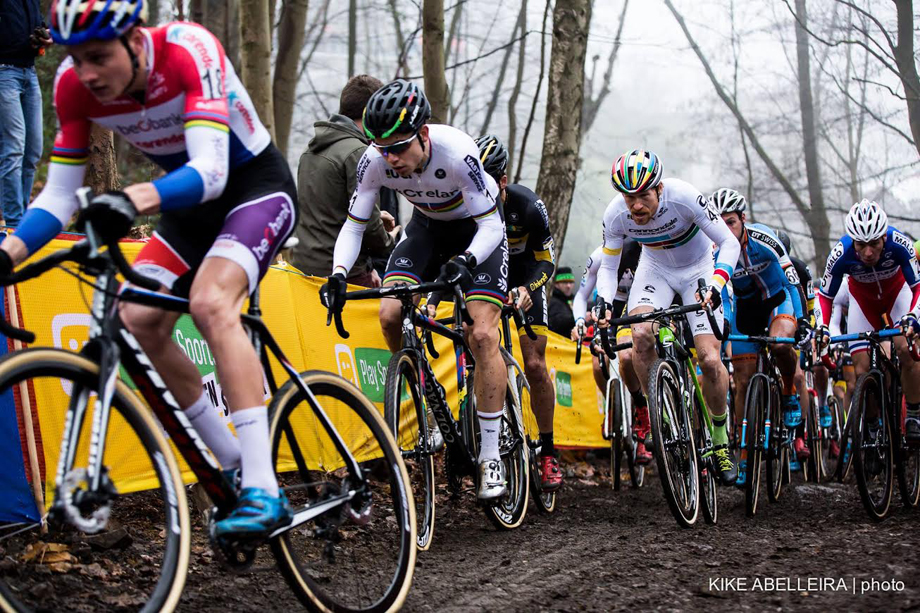 PEZ: You’d be on good start money now in Europe as US champion, any plans to capitalize upon that?
Sure, I hope to use my first million to buy a small island. (joke) it’s probably not as lucrative as you think…

PEZ: The Worlds – your thoughts and preparations please.
I am excited for worlds – this will now be my third. Every year becomes less and less stressful and results become more attainable. Hopefully I can keep this momentum rolling. Plus, I haven’t been to Luxembourg before. 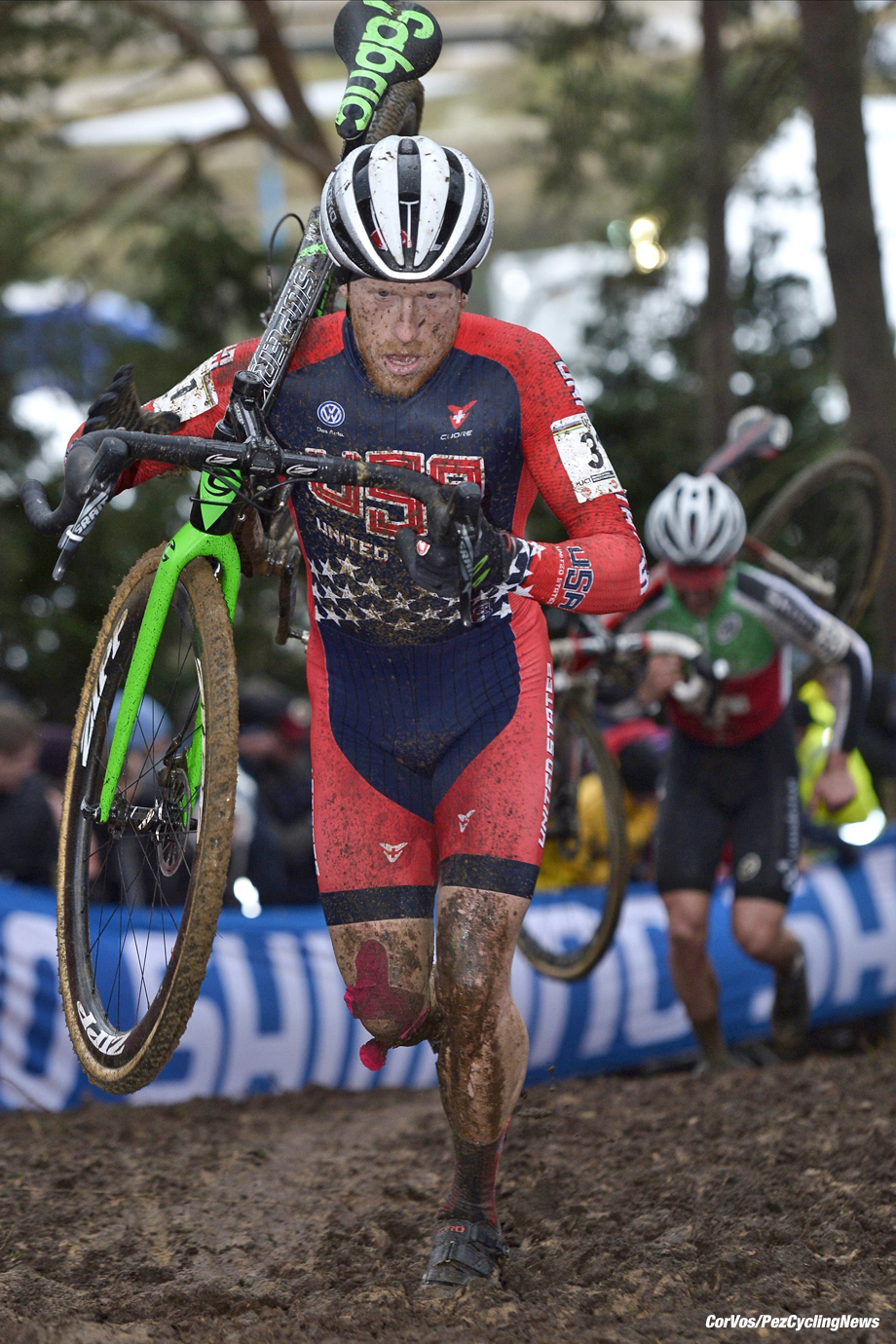 # Thanks to Stephen for the interview and good luck for the rest of the season. #