Rider interview: As we are in the midst of the cyclocross season with the World championships in a few weeks, Ed Hood has caught up with US star of the mud – Katie Compton. Over fifteen years at the top end of cyclocross is quite some record. 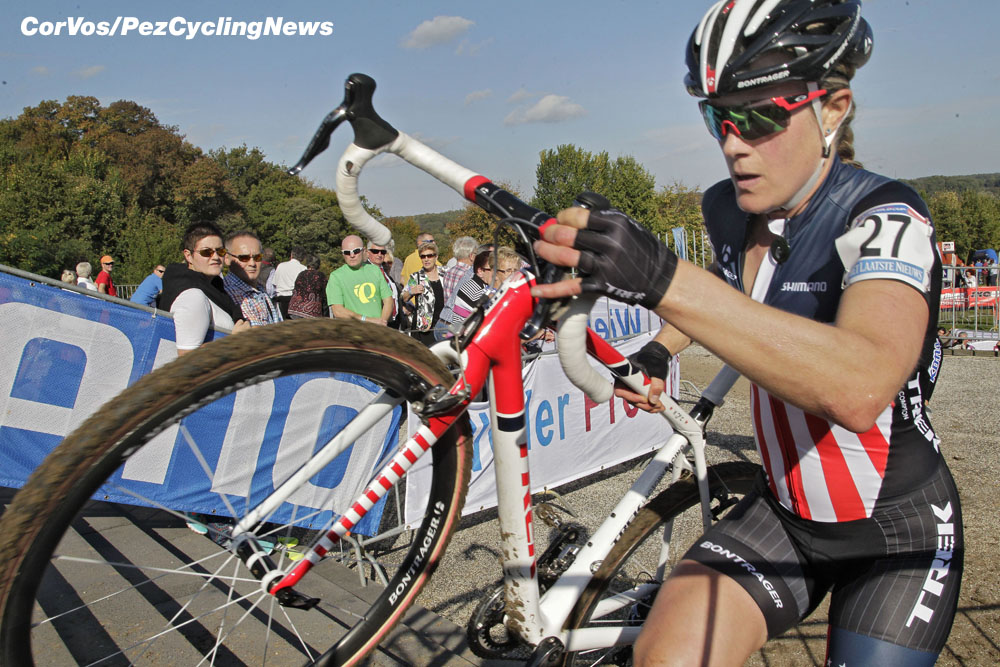 If you know your cyclocross then you’ll know this lady; 15 times US Elite Champion and five times on a Worlds podium: Katie Compton. But her career is drawing to a conclusion and we thought we couldn’t let a book like hers close without mention; here’s what she had to say to PEZ about her career: 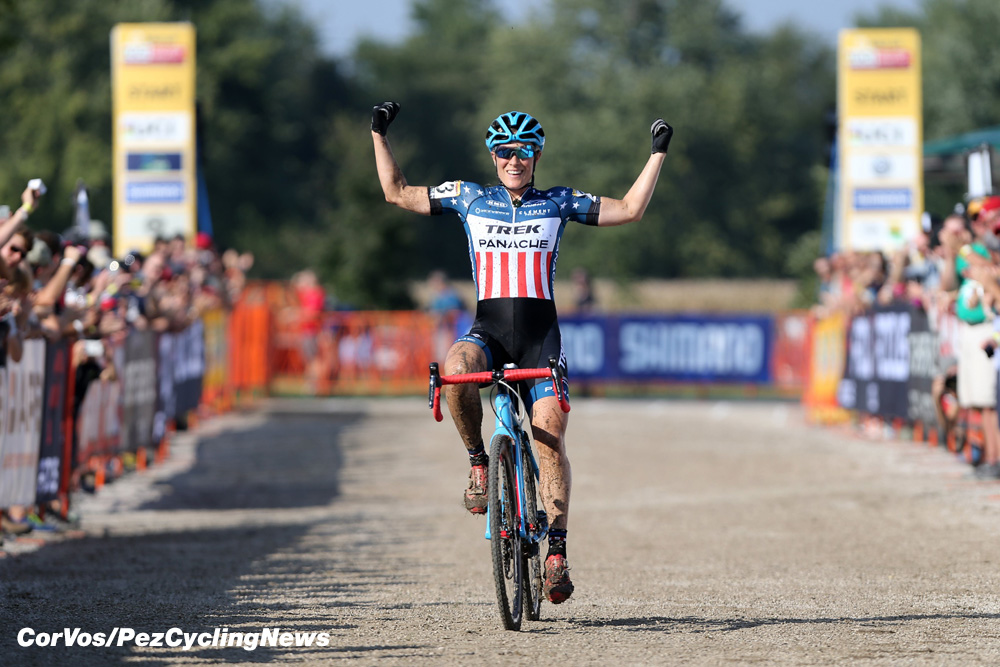 PEZ: How do you maintain motivation year in, year out – 15 years is a long time at the top?
I just like to ride my bike and to work hard. I enjoy the process of training and racing and being fit is something I enjoy, so I never let myself get too out of shape. The motivation to ride is there most of the time, and if it’s not, I’ll do something else active that I enjoy or I’ll switch bike disciplines for a bit and find some new energy riding my MTB or road bike. 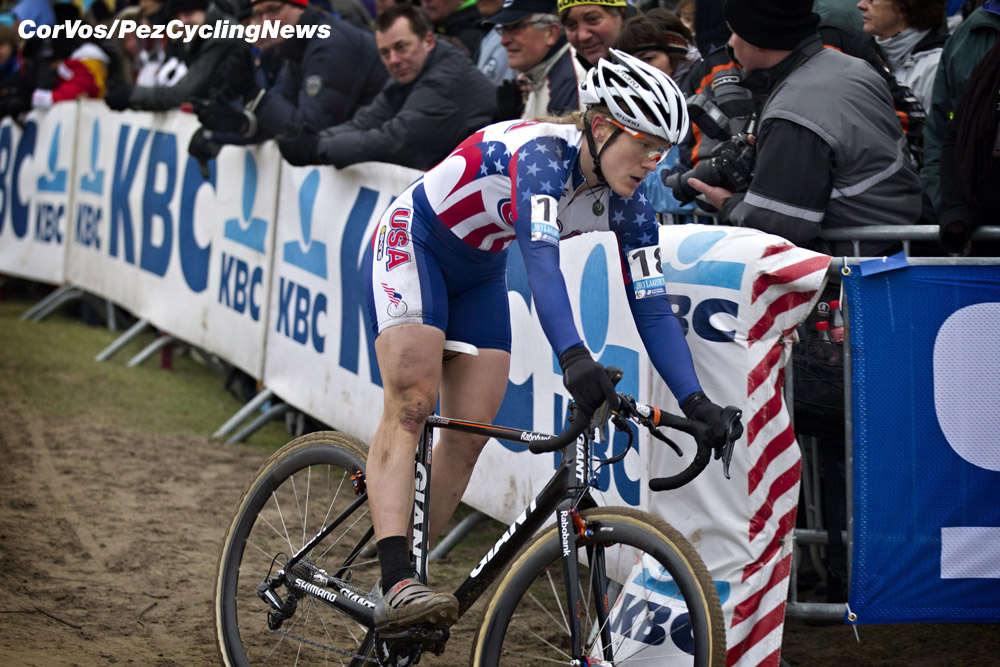 PEZ: It must have been a big wrench to quit your para cycling career, which is where you started?
Once I decided I was done racing on the US Paralympic team, I was happy with the decision. I had so much joy racing the tandem and being part of that team for five years, but I felt it was time to move on and focus on ‘cross. We had also won all the events we set out to win, so I feel we accomplished enough and I was happy with that. My partner and I won World champs, Paralympic gold medals in 2004 (and set a pursuit WR in the process, it’s been broken since then) and European champs over our time together and those races were a wonderful experience I’ll always keep with me. I do still miss racing the tandem on the track and getting that thing up to speed or sprinting down the banking, it was so fun. 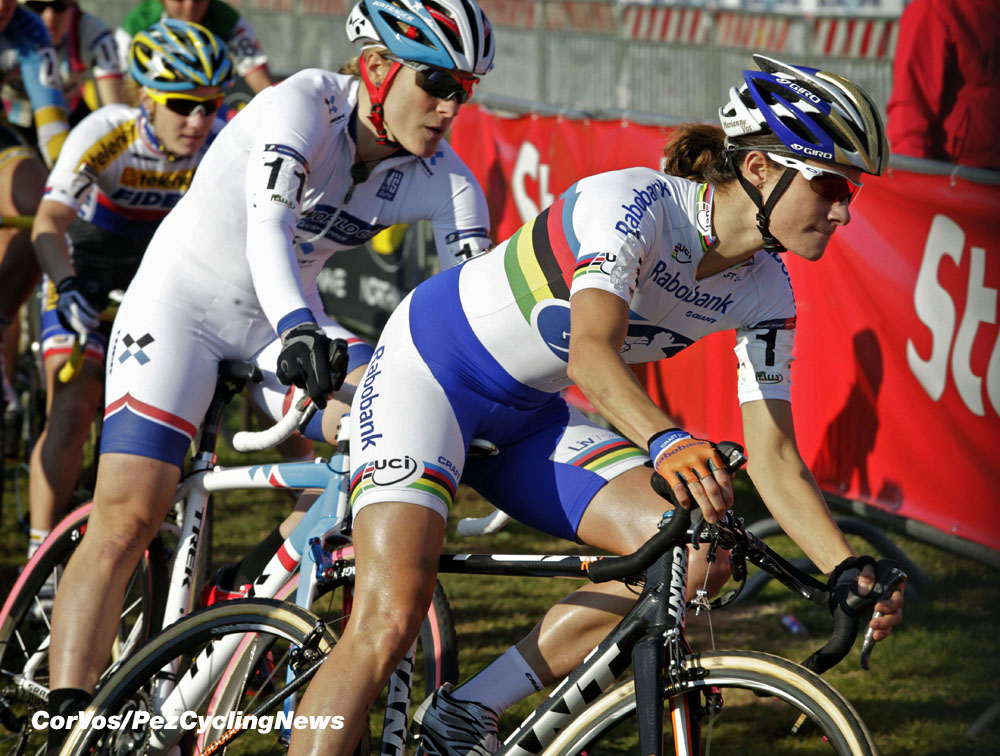 PEZ: On the subject of change of direction, did you ever think about riding MTB races?
That’s funny you ask since I did quite a bit of MTB racing and riding before I was a good CX racer. I raced domestically on the MTB as a junior and U23 before that was a category and had a few top 10 finishes as an elite at MTB world cups and got fourth at Val de Sol one year. I was also good at short track in the US back when it was mainly a US race. I do love the MTB and still ride it quite a bit, but I wasn’t good enough to compete at the high level even though I worked really hard to be successful at it. I was just too big and couldn’t climb fast enough.
I decided to focus on CX full time in 2012. 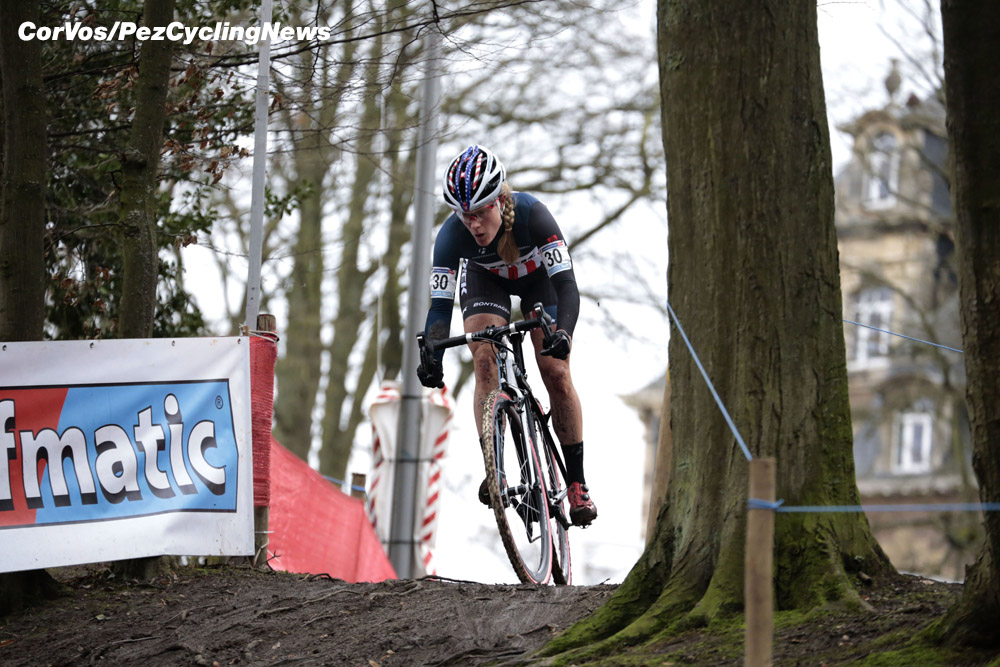 PEZ: How much of a part does road racing play in your preparation?
It depends on the season, in years past I’ve used MTB races to prepare, or track events and sometimes road races or criteriums as race prep for the season. The last few seasons I did more road racing and crits to prepare, but this year that was different with Covid cancelling everything in the US. This year, I mainly trained on my own and did a weekly fast group ride that we have in my town. It wasn’t ideal but it was still decent training and hard at times. I like to have a mixture of MTB, time for skills and road time for speed in the off season when I can. 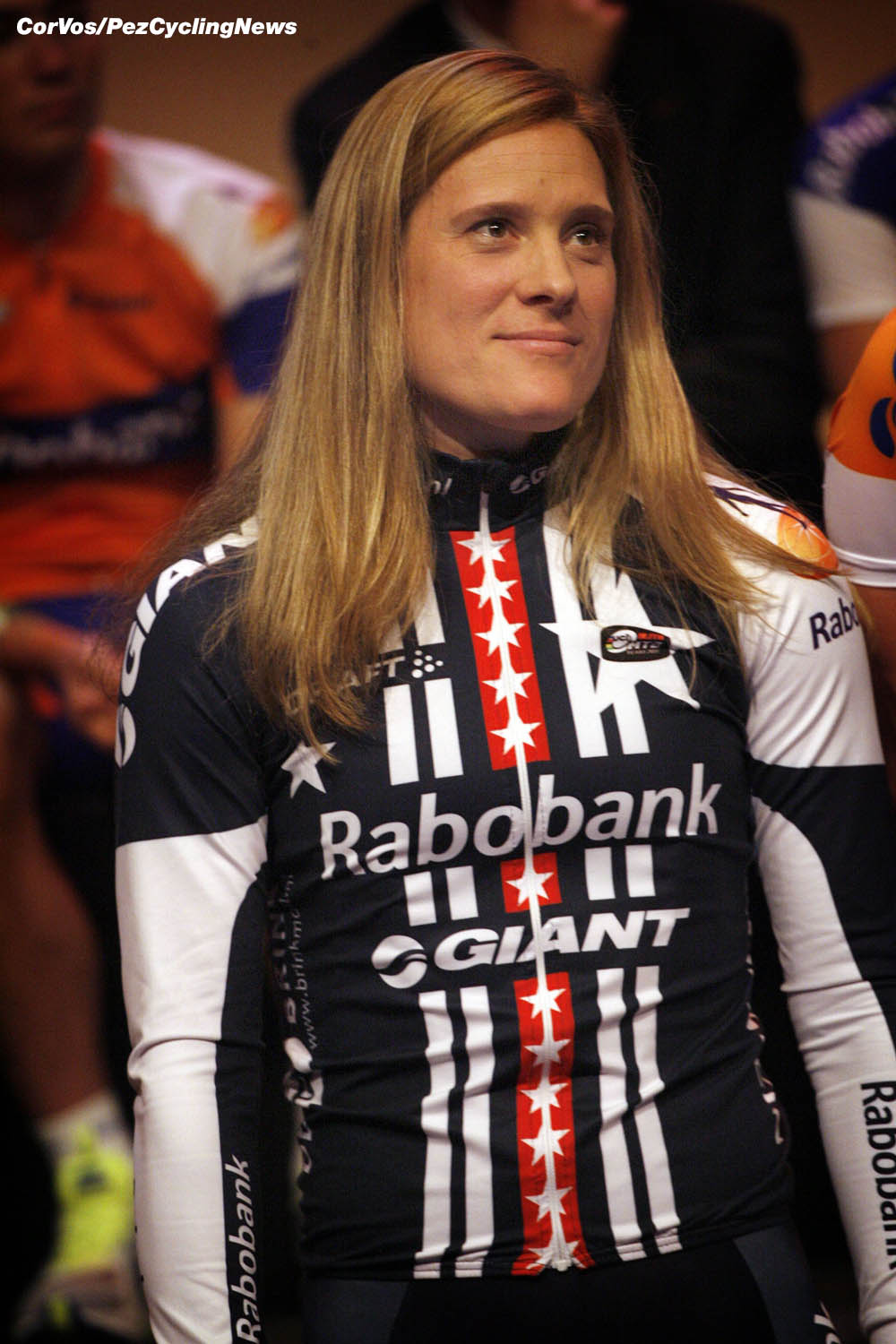 PEZ: Tell us about your two seasons with Rabobank.
I actually only did one-an-a-half seasons with them. It turned out I wasn’t as good on the MTB as they wanted and they didn’t give me the support I needed for CX, so we both lost out on that. It was a good learning experience and I enjoyed my brief time with the team as the riders and staff were really easy to hang out with and the program was well run. We decided to end the contract early so I could focus more on CX and they could open up a spot for a better MTB rider. Not much to tell on that time. It was just a hard period for me realizing MTB racing at the World Cup level wasn’t something I wanted to do. 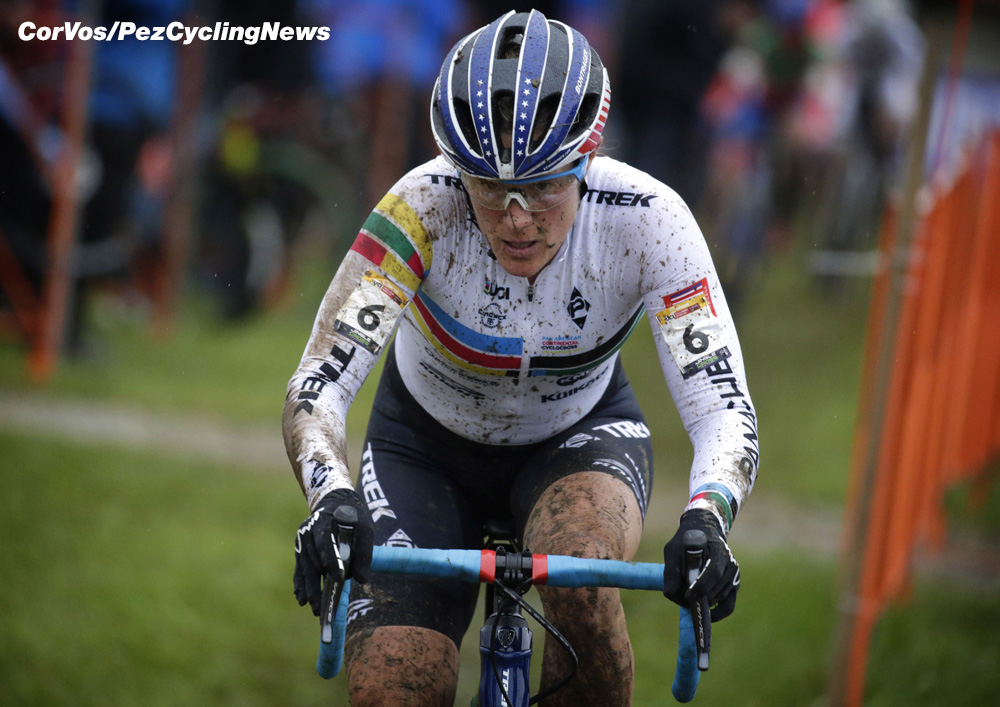 PEZ: Five Worlds podiums, any ‘what if’s’ among those?
That was four silvers and a bronze. I think I was disappointed for three of those five races.
I did the best I could each year and had good races for two of those medals, but I still wasn’t the fastest on the day and I’m OK with that. I had my moments of disappointment and still feel crappy about the years I had to sit out completely because of my leg pains when I was winning a lot of races those seasons. I’ve done a lot with what I have to work with and I’m super proud of that. My biggest ‘what if’ I guess was in Louisville when I dropped my chain after the start and went from the front of the race to the last place on a fast slippery course that was super hard to pass and ended up riding through the field to second place behind Vos. It would have been nice to race her from the front as that was my best season, I won the World Cup overall that year and beat her in the Rome World Cup a couple weeks prior. I was feeling good and strong and that mechanical changed my day and made it much harder for me. I’m happy I still put my head down and went as hard as I could, but I still wonder if maybe that result would’ve been different if I didn’t lose so much time on that first lap and the next laps chasing through the field. But that’s bike racing and mechanicals and flats are part of it.

I’ve been racing my bike for 34 years and dealt with a lot of disappointment along the way. I’ve enjoyed a lot of success, but it’s amazing how the bad races and low points can stand out way more than all the good times. It’s definitely a roller coaster of emotions. My favorite silver was in Valkenburg in 2018 against Sanne Cant since it was such a close race, it was the hardest course we’ve ever done and Sanne is such a great competitor. I did everything I could that day and still got second and that is the way to goes sometimes. 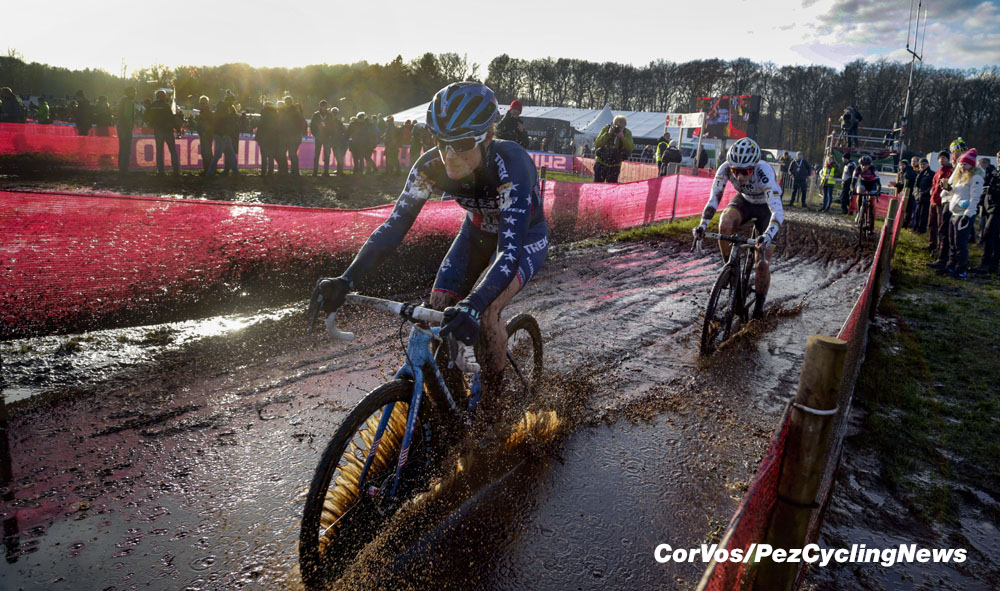 PEZ: What’s your favorite type of parcours and race?
I generally like mud races (minus this past weekend because that was like racing through quicksand and it was awful) and fun technical ones. The best race I’ve done recently is Herentals CX last week in Belgium, it was by far the most fun and best course I have raced in a while. It was flowy and slippery and muddy, the run-ups were tough and the downs were pretty fun too. It was just a good mixture or tough and fun. 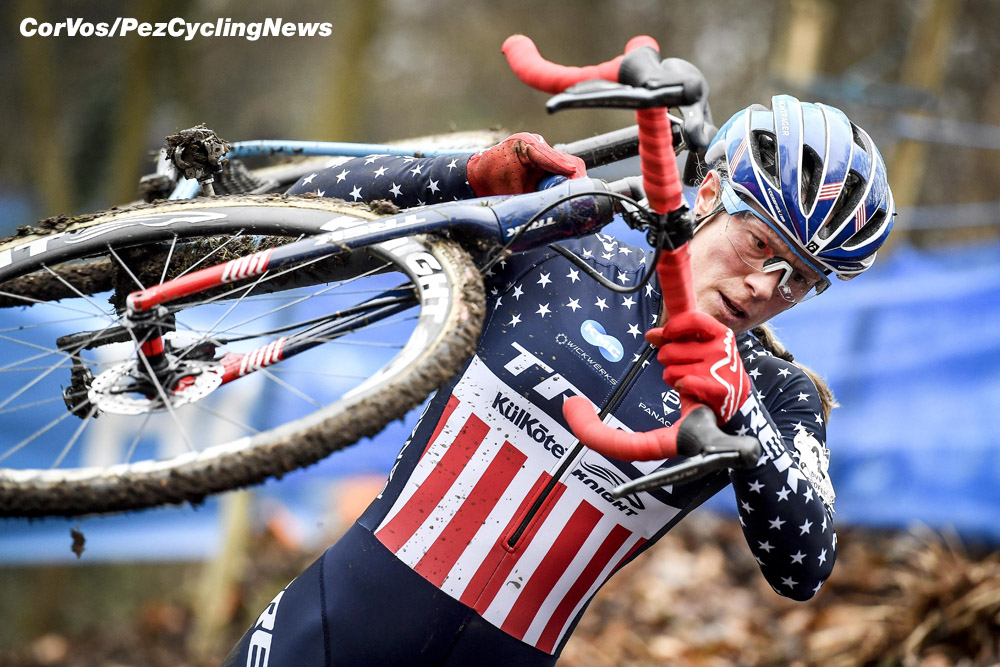 PEZ: What do you rate as your best performance?
The Rome World Cup in 2013 was my favorite. It was a muddy race that suited me and I had good legs and won that day. 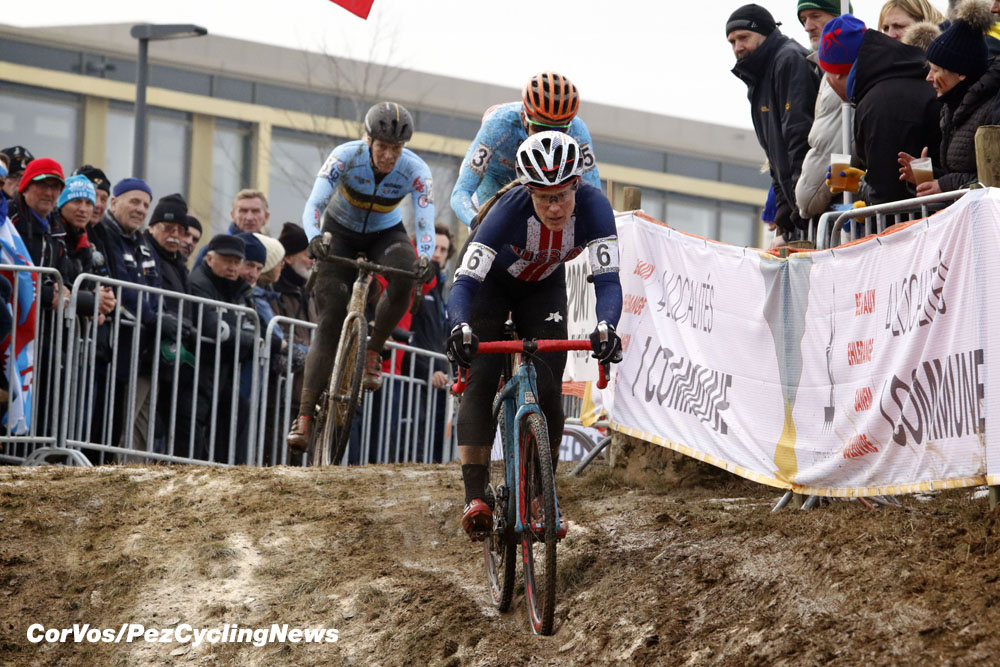 PEZ: You must have seen some big changes in the sport over the course of your career?
Yes, that’s a big question. It’s changed quite a bit. All for the better. We have longer races, more prize money, better start contracts, more sponsorship dollars and team support, TV time, and we aren’t racing at 10:00am with the juniors so that’s plus. All World Cups also have to have a women’s race which is a change from when I started and now they have a junior category. Women are finally gaining more respect and fans are tuning in and that is wonderful for the progress of women’s racing. It’s a constant uphill battle for equality, but at least we’re making progress and that should be celebrated. 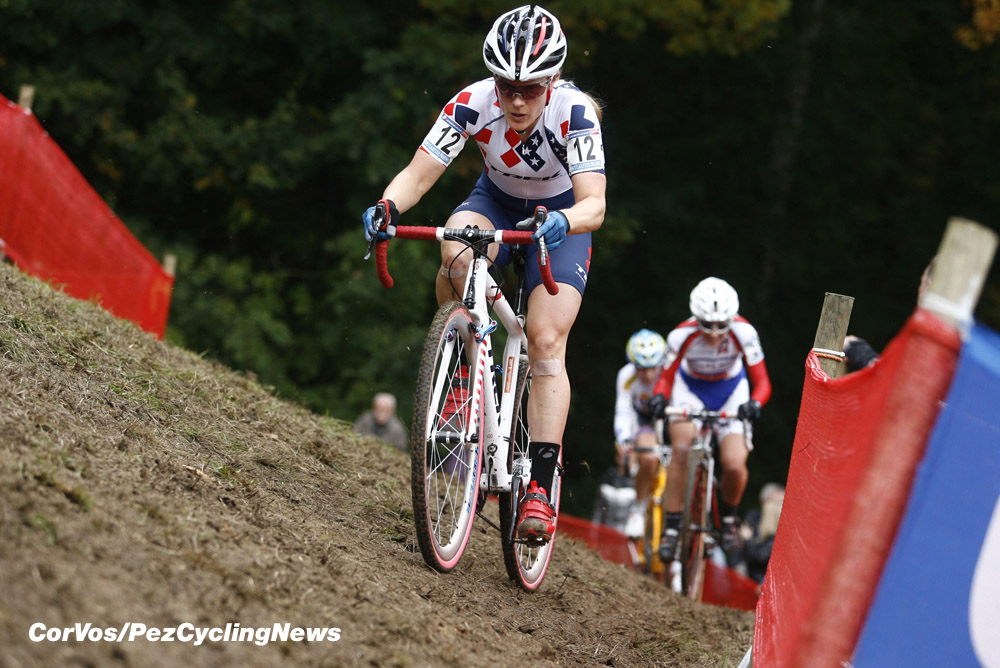 PEZ: Likewise, equipment, what do you see as the biggest advances?
Probably disc brakes and electronic shifting. Disc brakes allow you to ride more technical and slippery terrain with confidence so riders can go faster and take more risks. Also the tires and treads have developed and gotten more aggressive and have a better ride feel. The electronic shifting is just cleaner and easier to use and the shifts are perfect. 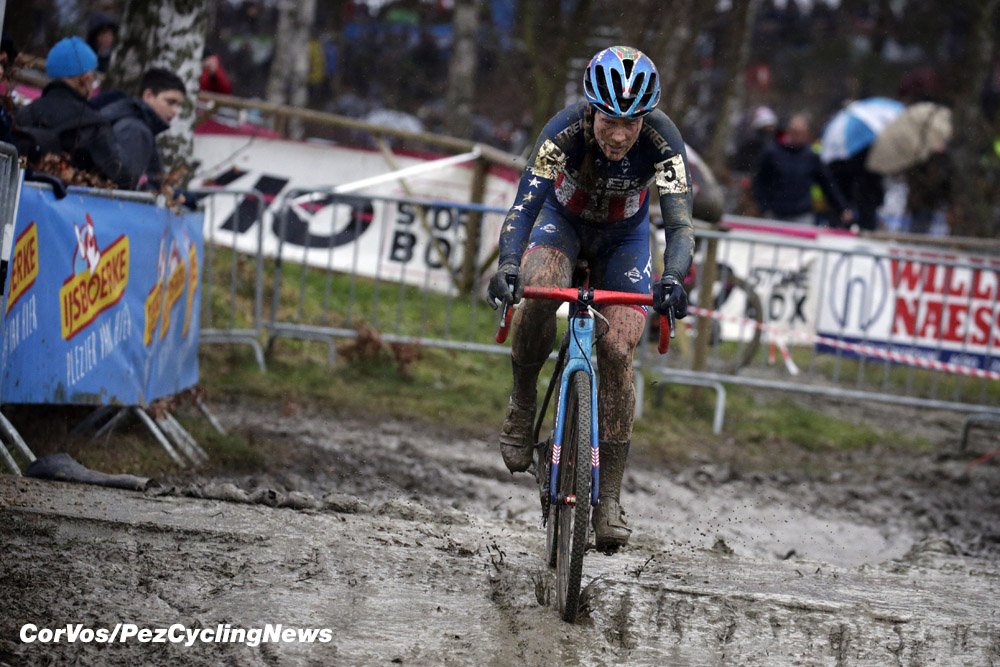 PEZ: Looking back over your career, anything you would do differently?
Not really, I’m happy with the experiences we’ve had and all the wonderful people we’ve met along the way. Racing CX is a love of mine and I’m grateful that I’ve had so much success and fun times with it. I guess my biggest change would be figuring out the root of all my health issues and leg pains sooner, but research and data wasn’t available for that until recently. My leg pains, asthma and allergies have been my biggest hurdles I’ve struggled with and learned to manage through the years, so I only wish I would’ve figured that out sooner. Training, travel, and racing would have been much easier and far less of an everyday struggle if I knew how to manage it 25 years ago. 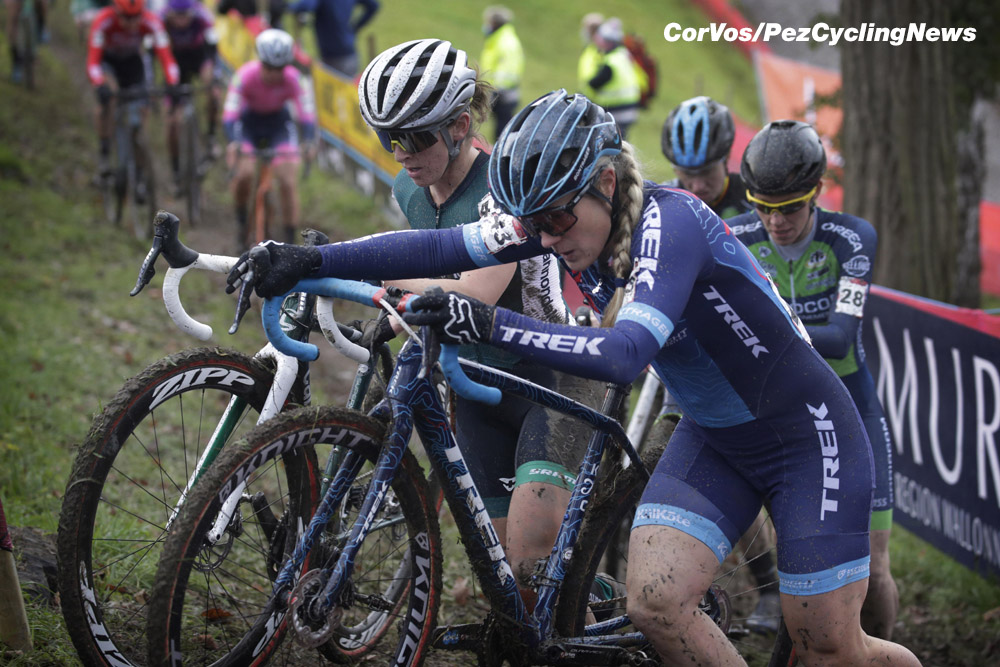 PEZ: What will life after racing look like?
I plan to stay in the world of bike racing in some capacity. I’ll also always ride my bike and probably race local masters races because I like CX too much to stop completely. I also plan to go back to school for nursing. I’ve always been interested in the medical field and that was something I was thinking about in college before focusing on bike racing. I’ll also continue to do some coaching.

# With thanks and best wishes for the future to Katie Compton, ‘cross legend. # 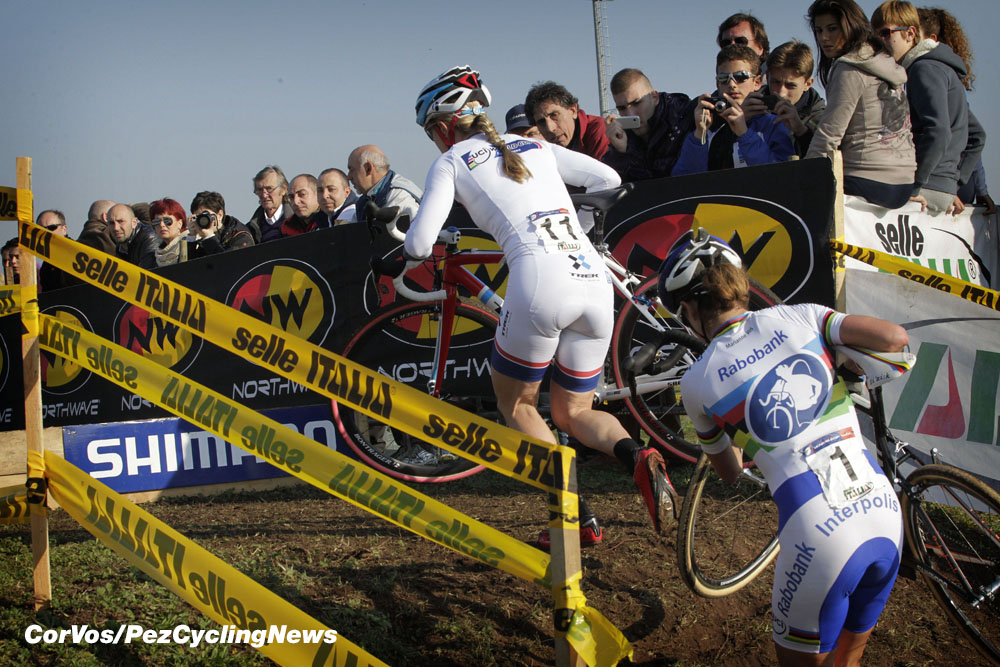