Rider Interview: 2019 seems to be the season of the young riders and cyclocross in the USA is following the fashion as Donnelly Aevolo’s ‘Young Gun’ Gage Hecht took the national championships recently. Ed Hood caught up with Gage as he was about to start his Christmas and New Year in the European mud. 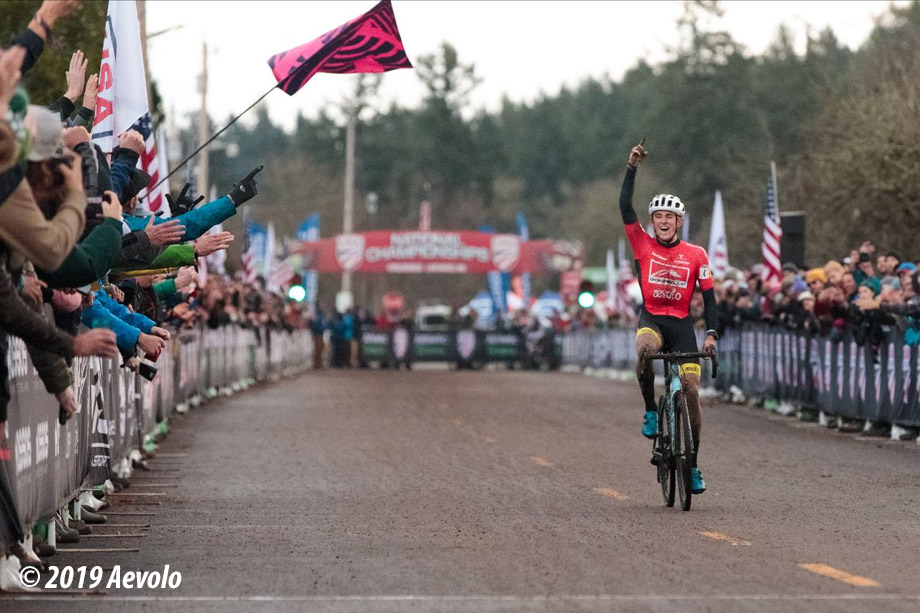 If, like me, you expected Stephen Hyde to make it four in a row US National Elite Cyclo-cross Championships you’d be surprised when 21 year-old Gage Hecht (Donnelly Aevolo) popped up and took the title. But we shouldn’t have been, Hecht was third in the race last year and with the Tour de l’Avenir in his legs there was no shortage of ‘core’ for the man who as well as being a quality ‘mud plugger’ is no slouch against the watch.

It was 2013 when he first appears on the radar as second in the US Novices TT Championship and third in the Road Race Championships. Within a year he was Pan Am Junior Cyclo-cross Champion and won the Duinencross Koksijde against a field full of aspiring Sven Nys’s. Season 2015 saw him win the US Junior Cyclo-cross Championship, take second in the Road Race Championships and third in the Time Trial Championship. In 2016 he defended his junior ‘cross title and added the road race. The 2017 season saw him take a stage in the tough Redlands stage race and win the Pan Am u23 ‘cross title. Last year he won the US u23 TT Championship won the Pan Ams u23 ‘cross again and was third behind Hyde in the National Elite ‘cross title race. 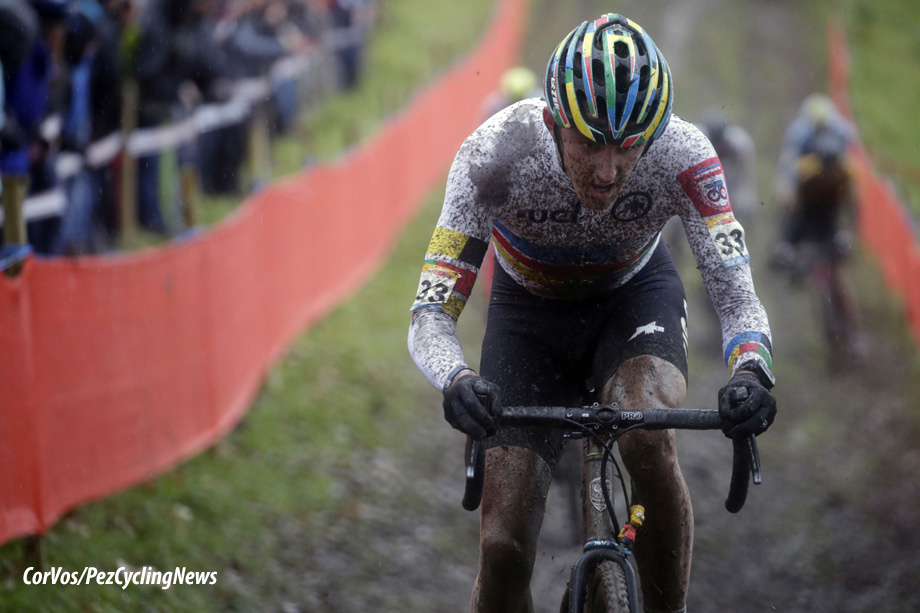 This season saw him finish second to Ian Garrison – who would go on to finish second in the World u23 TT champs and land a contract with Deceuninck – in the US u23 TT title race and make it a hat trick of Pan Am u23 ‘cross titles. 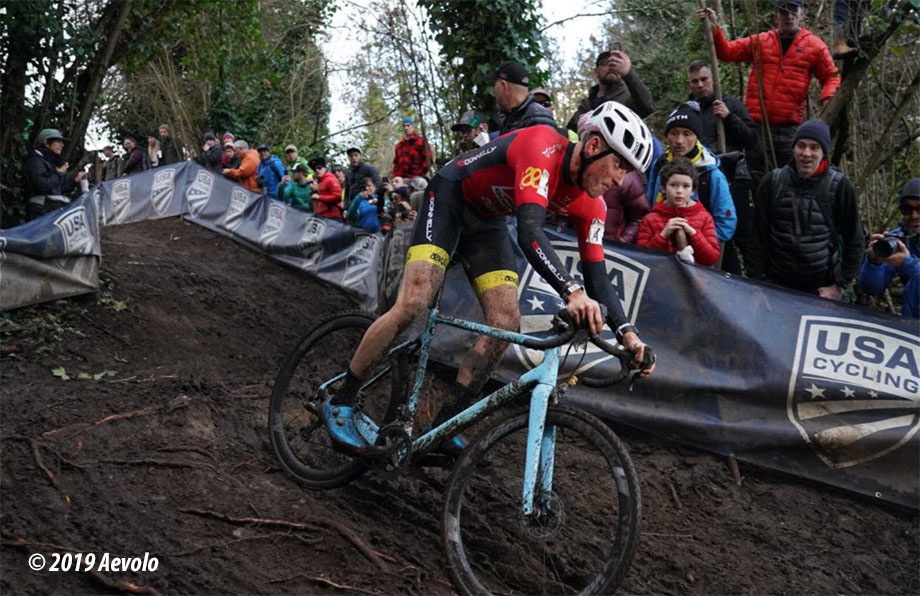 On the way to the national champ’s jersey

PEZ caught up with the man from Parker, near Denver, Colorado at the US training camp in The Netherlands on the eve of the Telenet World Cup in Namur, Belgium; we started off by asking if his ‘course en tete’ ride from lap two of the title race had been planned or it just turned out that way?
Gage Hecht: The course had a lot of steep drops on it and I wanted to be at the front for those because you get splits off the bottom of those – I got a gap off one and was away. . . 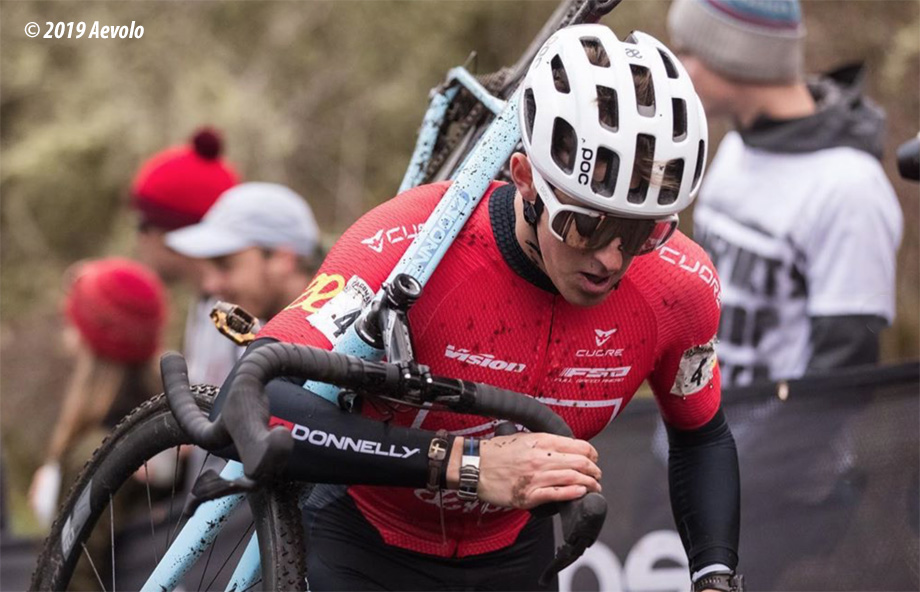 Bit of running in the 2019 US cross champs

PEZ: A very muddy parcours, is that your thing?
Oh yes, I loved the parcours with all the mud and ruts – not like last year. There were three or four running sections this year, I’ve done a lot of work on that aspect of my ‘cross racing and it’s paid off. 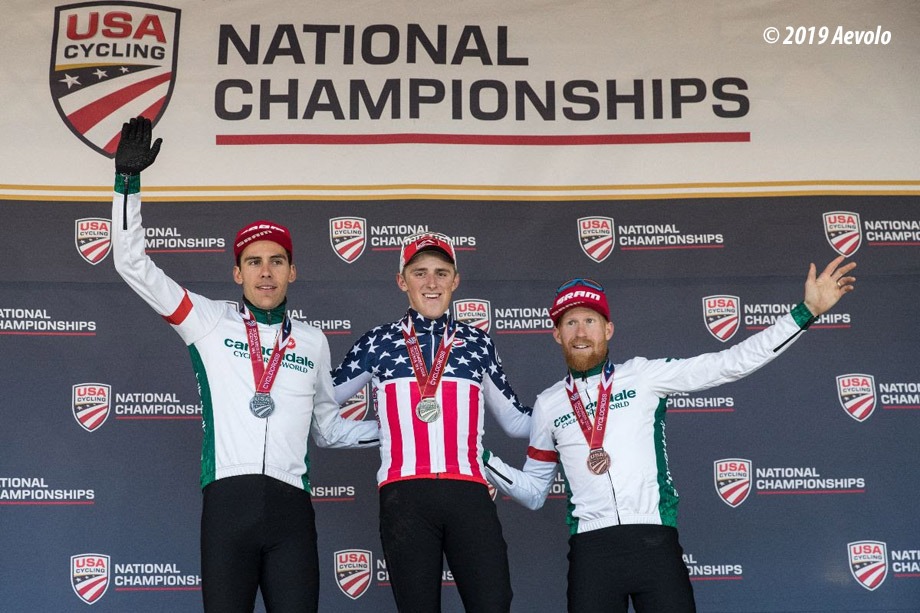 PEZ: Curtis White Second and Stephen Hyde third – strong opposition.
For sure, the top five guys in the US are all strong right now and I think there’s going to be some good battles between us all over the next few seasons. 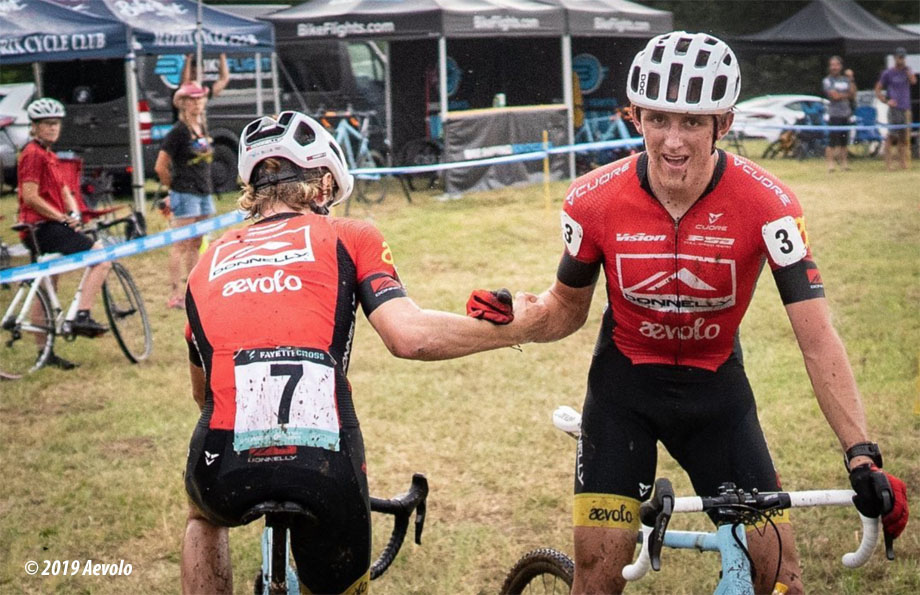 PEZ: Tell us about your Donnelly-Aevolo team.
Aevolo is my continental development team whilst Donnelly is a US tyre company; with the team evolving from the Raleigh-Clement team – they’ve hooked up for the ‘cross season. Donnelly used to license the Clement name from Pirelli but ended its agreement and launched into the market with a tyre label under the Donnelly Cycling banner. 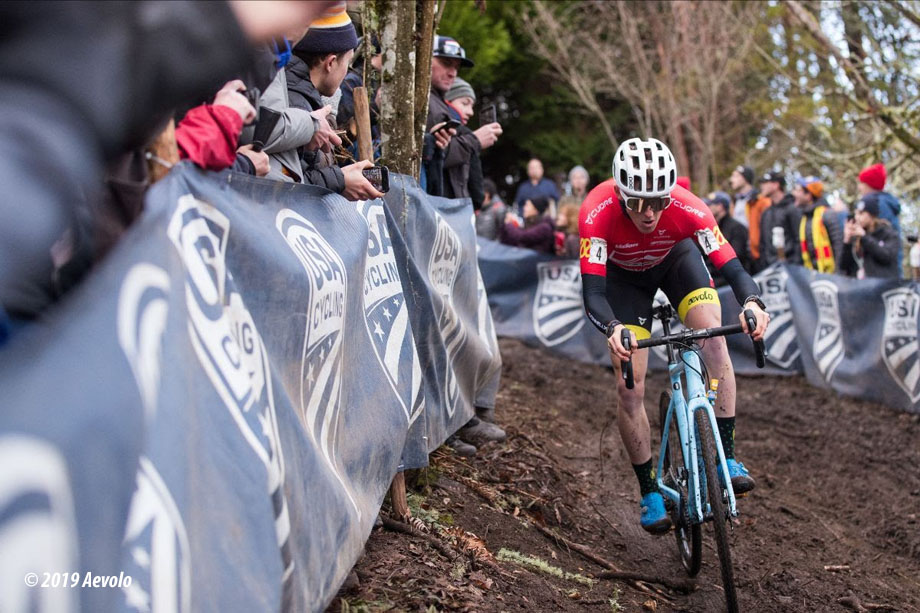 PEZ: And your bike, double chainrings – most ‘cross are on ‘one by’ transmissions now?
It’s a carbon Donnelly, I like the single ring set up and whilst you don’t drop the chain with it too often, if you have double rings then it’s a lot easier to get your chain back on. The groupset is Dura-Ace electronic and tyres are Donnelly 33 mm PDX running at 22 psi front, 23 psi rear. 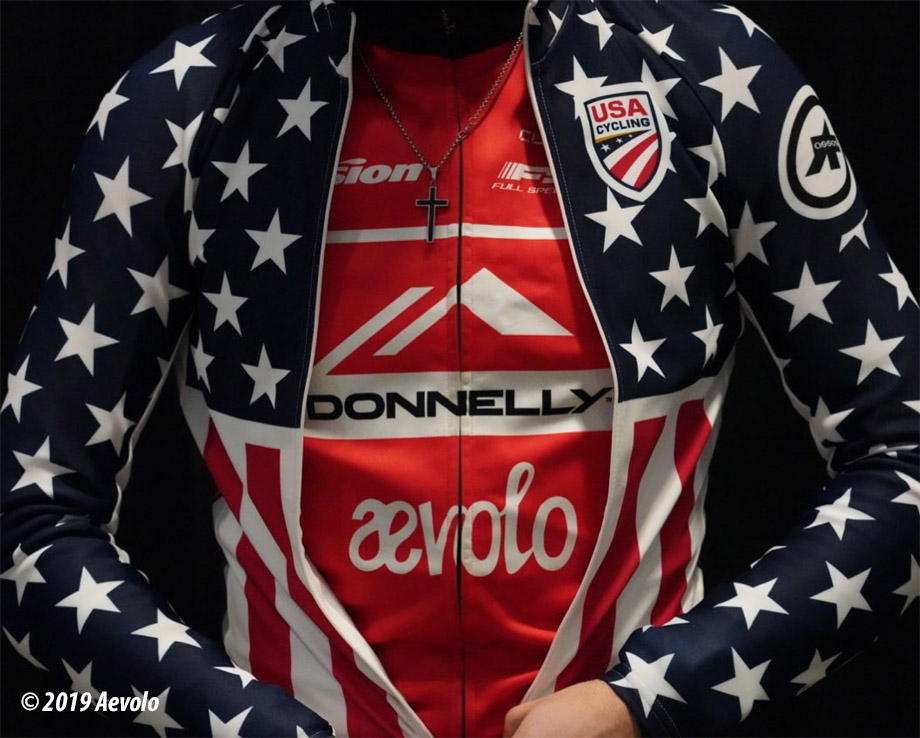 Pulling on the ‘Stars and Stripes’

PEZ: When’s your first opportunity to wear that nice stars and stripes jersey?
We’re checking the rules but think it should be good for tomorrow in the World Cup at Namur (World Cups are ridden by national squads, ed). 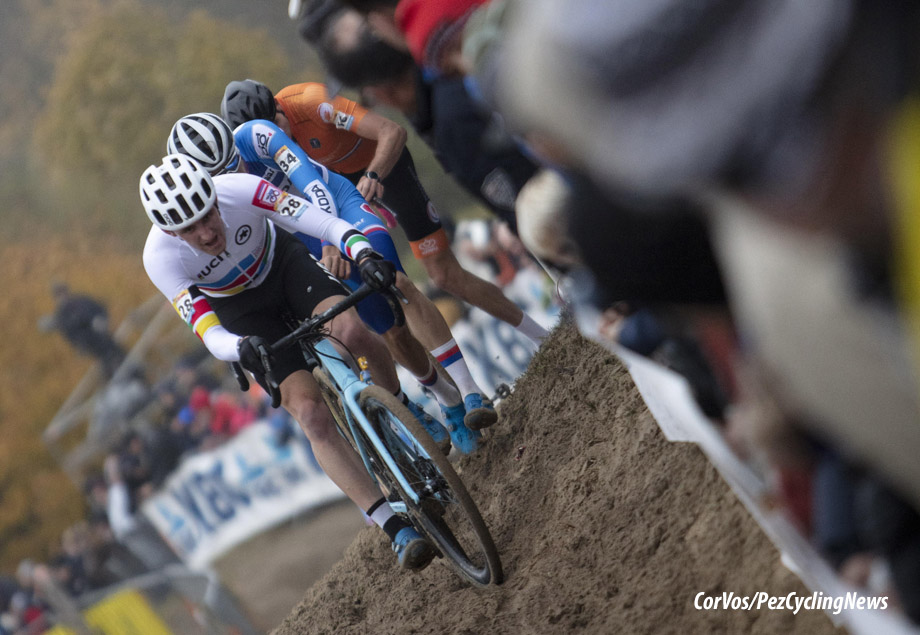 2019 Vlaamse Duinencross U23 in Koksijde

PEZ: How long are you over here in Europe for?
Pretty much the rest of the ‘cross season. We’re racing in Belgium over the holiday period with the Zolder World Cup on 26th December then in the New Year we travel to Malaga for a training camp, after that we travel north to ride the Nommay World Cup in France on 19th January, then there’s Hoogerheide World Cup in Belgium on 26th January before the Worlds at Dubendorf in Switzerland on Saturday 1st February. After that it’s home and back to the Metropolitan State
University of Denver where I’m studying aviation with a view to becoming a professional pilot.

PEZ: So you’re away from home all over Xmas and New Year?
Yeah, it’s a bit of a bummer but I had Thanks Giving at home with my family – that’s not a big deal over here in Europe but it is back in the States. And I had a celebration with my sister, Mom and Dad before I left for this trip; and it’s not a new thing, the last five or six years I’ve been with team in Europe over the holiday so I’m used to celebrating Xmas with the US cyclo-cross team! 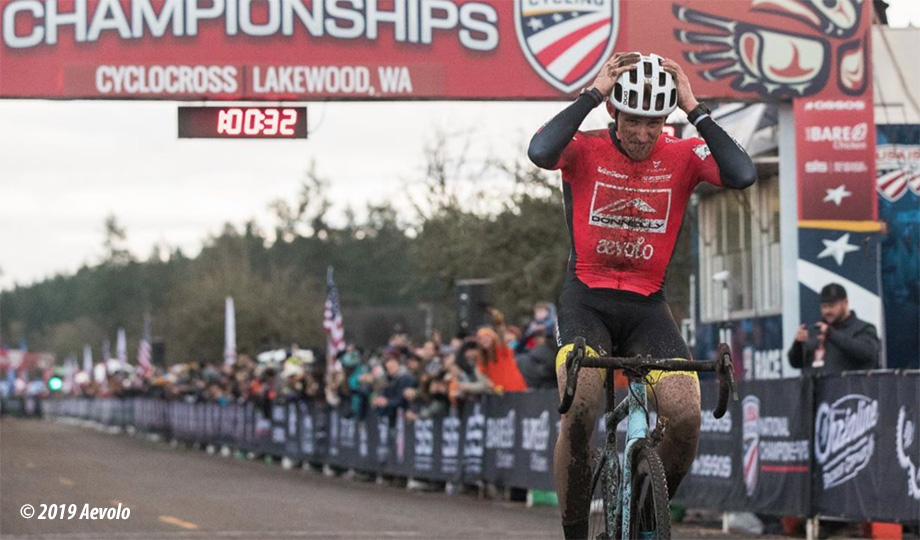 Fine win for the national champs

PEZ: That US Champion’s jersey should get you good start money in Europe?
We’re working on that!

PEZ: You had strong Euro results as a junior, did you ever consider coming over and staying for the full ‘cross season?
It’s something I’ve always wanted to do but there was school to consider and also the mental aspect – as a 16/17 year-old it would be hard on the head. But it’s perhaps something I’d like to do in future years? 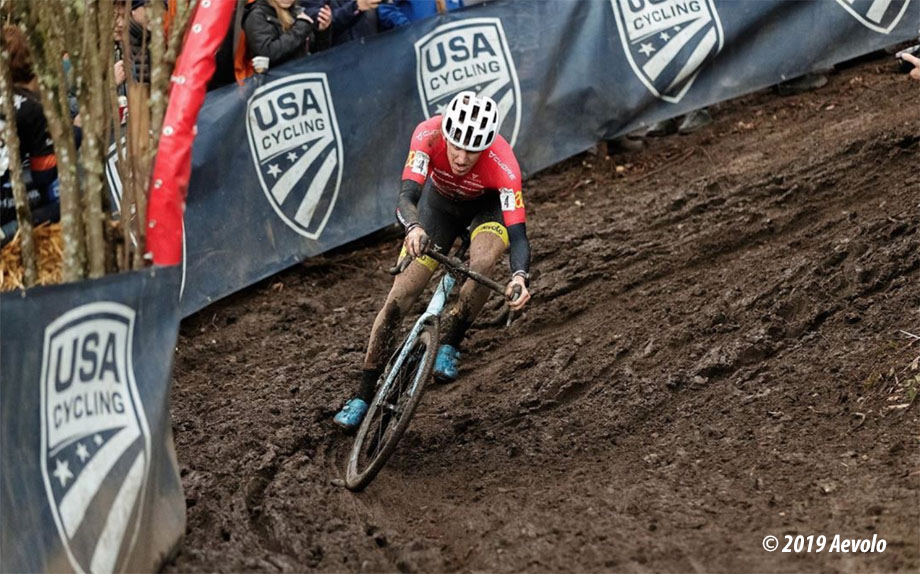 PEZ: Who did you admire in the ‘cross world as a youngster?
In the US, Jeremy Powers, Jonathan Page and the guy who’s my DS now, Jesse Anthony. They were a great group of racers and I used to like watching them battle it out after I’d finished my race as a junior. And of course, watching the Mathieu v. Wout battle over the years has been terrific.

PEZ: Namur tomorrow?
I love that race, the setting is so striking, up there on top of the citadel with massive drops and run ups, as a taller guy the run ups don’t suit me really but I still love the race. 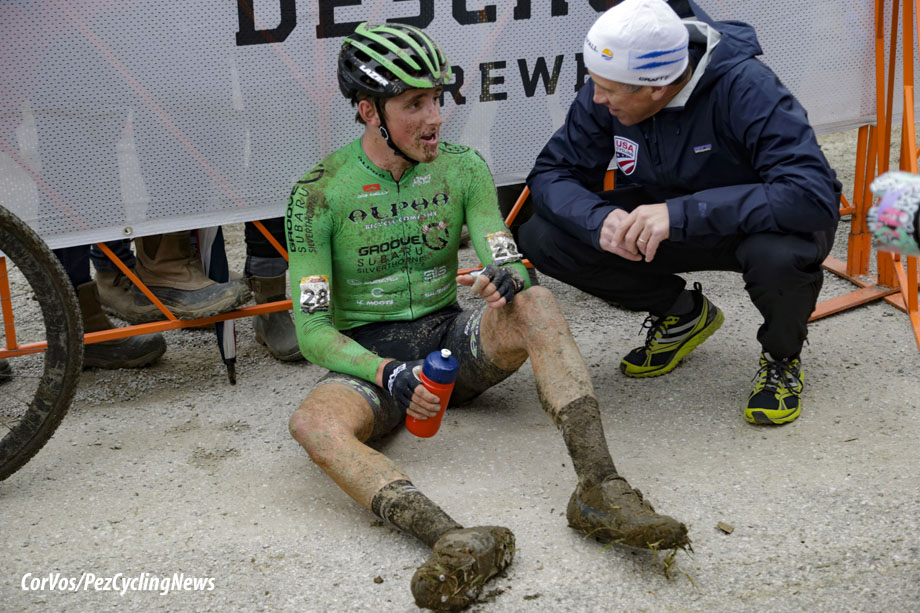 PEZ: And you rode the Tour de l’Avenir, that must have given you great core for the National ‘cross?
That was an amazing experience, the first time I’d ridden in the high European mountains; especially with guys who are going to be World Tour – possible even a Tour de France winner. I was tired out of it but yes, it must have helped my preparation for the Nationals. 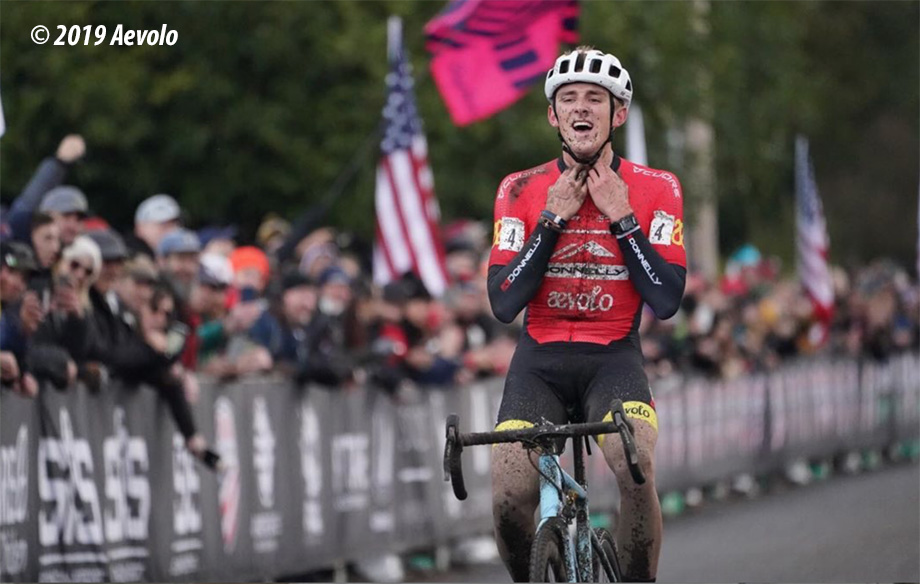 PEZ: The big choice for the future, road or ‘cross?
I hope to do both as long as I can but my goal is to make a career as a pro ‘cross rider. 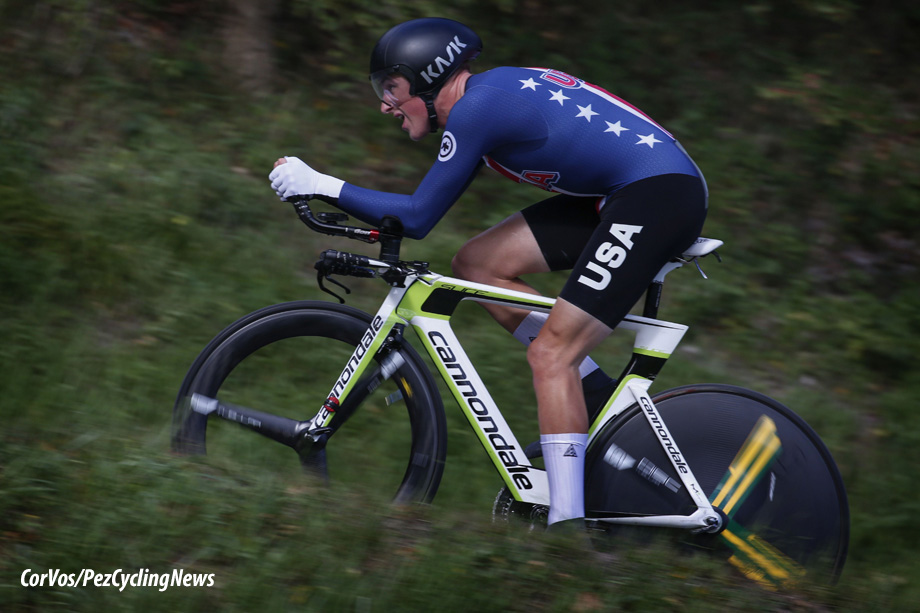 PEZ: 2020?
I’m not sure on the ‘cross side but I’ll be continuing with my Aevolo u23 road team – hopefully we’ll be doing some racing in Europe, so I’m looking forward to that. . .

# We’ll keep be keeping an eye on those u23 World Cup results for the rest of the season. # 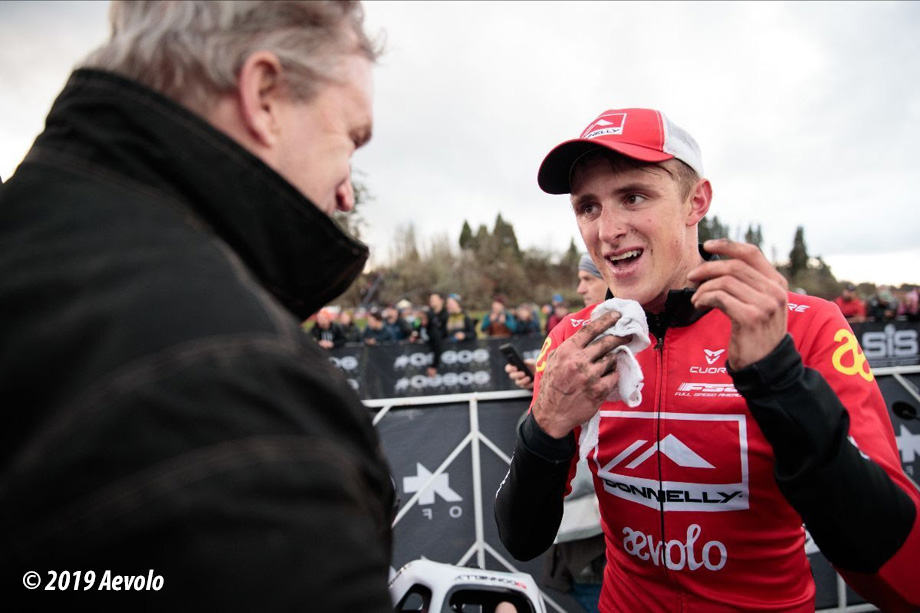