There are ways of closing the book on your career, but one of the best must be to set a new Hour Record, and that is what Tom Zirbel did. The fast-man from Iowa put a kilometer and a half onto the previous US Hour Record to post a stunning 53.037 kilometers on the velodrome in Mexico and then hung up his race wheels. Ed Hood gives the last word to Tom.

Tom Zirbel – along with David Zabriskie and Taylor Phinney – has been one of the ‘big three’ of US time trialling for almost a decade; but ‘all good things must come to an end’ and the big man from Clear Lake, Iowa who was 2013 National TT Champion has decided to call ‘time’ on his career.

But he’s ‘done a Jensie’ and gone out in style, shattering Norm Alvis’s two decades old US hour record of 51.505 with 53.037 on the high altitude boards of the Aguascalientes Velodrome in Mexico.

We wouldn’t be doing our job if we didn’t congratulate the man and get the inside story on only second ride to top 53 kilometers under the new UCI Hour regulations. 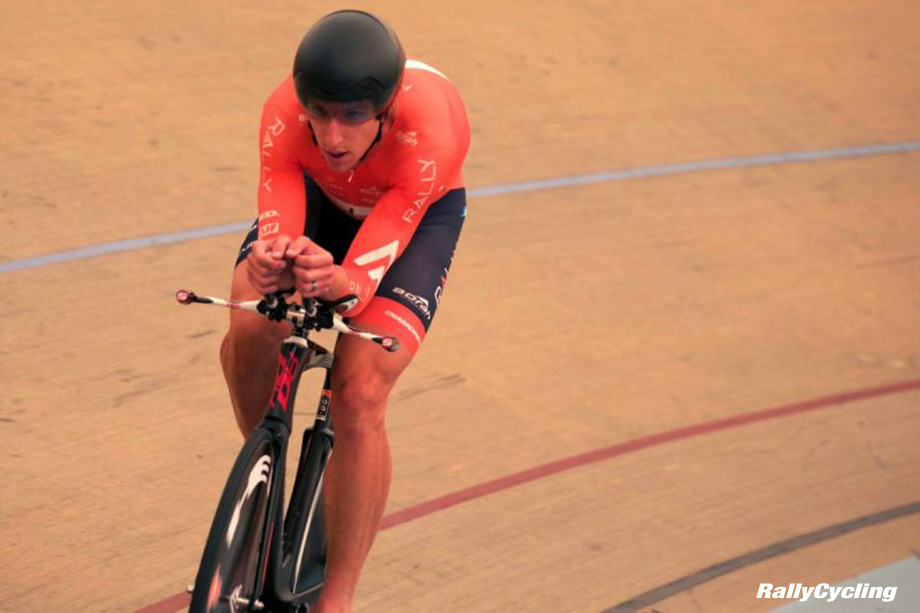 PEZ: Great performance, Tom – where did the idea of The Hour come from?
Tom Zirbel: I first talked about it with my director Jonas Carney at pre-season camp in 2015, shortly after the rule change allowing UCI legal TT bikes. We tried to get it organized for an attempt in 2015 but it didn’t quite materialize.

PEZ: Why quit now – you’re still winning?
I know it’s the right time for me. I’m having a harder and harder time motivating myself and getting excited about races. I think physically I could compete for a few more years but my heart just isn’t in it anymore and it’s doing the profession an injustice if I try to fake it. 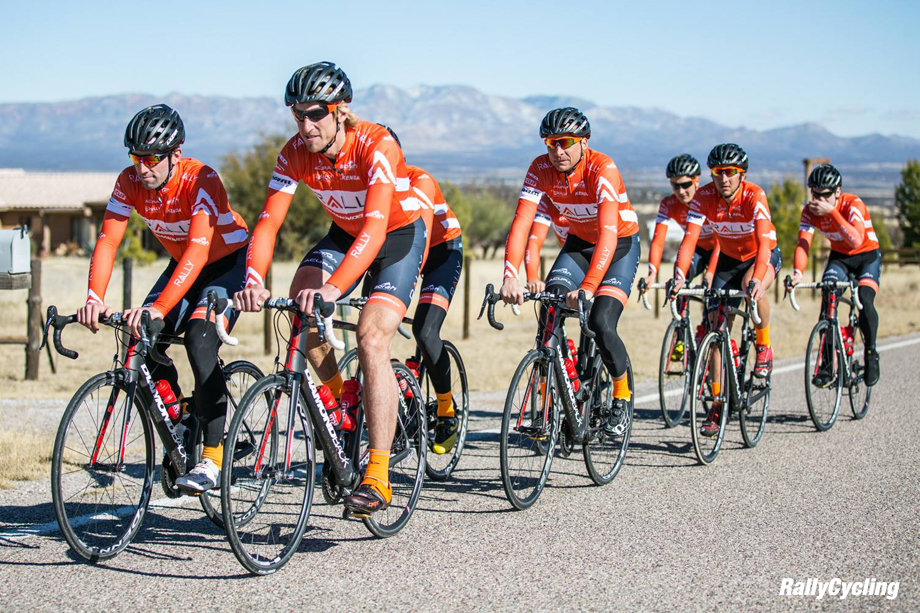 PEZ: Tell us about your training, please.
I spent a lot of time at the Boulder Valley Velodrome, an outdoor 250m track about a 40 minute ride from my house, starting in the summer of 2015 and leading up to the attempt. Kevin Nicol, an Hour Record guru of sorts, was there guiding me through 95% of my track workouts.

PEZ: Did you do any wind tunnel testing?
No. 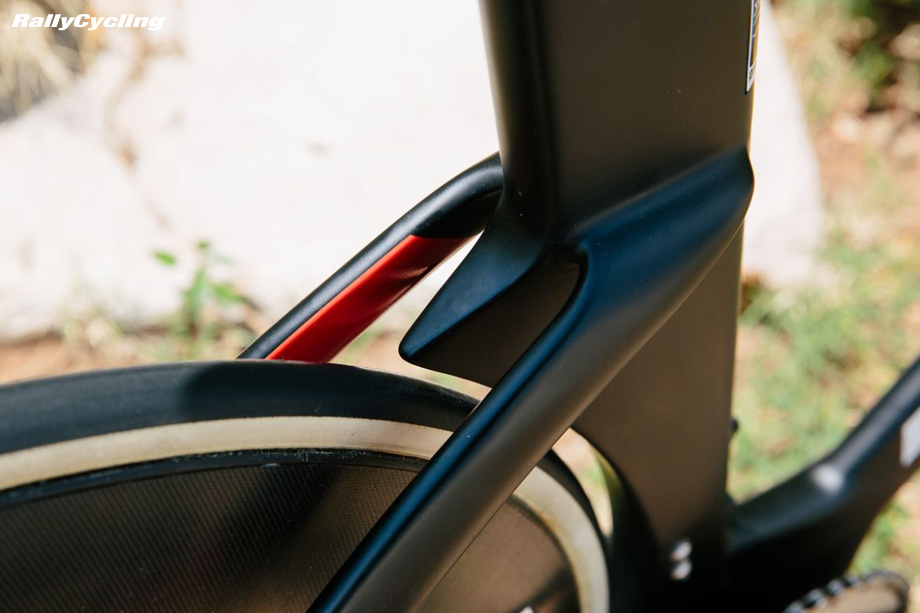 PEZ: How did your Hour position compare to your usual time trial position?
It’s the same position. I’ve spent so many hours on my road TT bike over the years that it seemed a bad idea for me to change it for this event.

PEZ: Did your Boulder training prepare you adequately for the thin air of Aguascalientes?
Yes, the altitude, climate, and time zone of Aguascalientes are all similar to Boulder so I had no trouble adapting to the new environment. 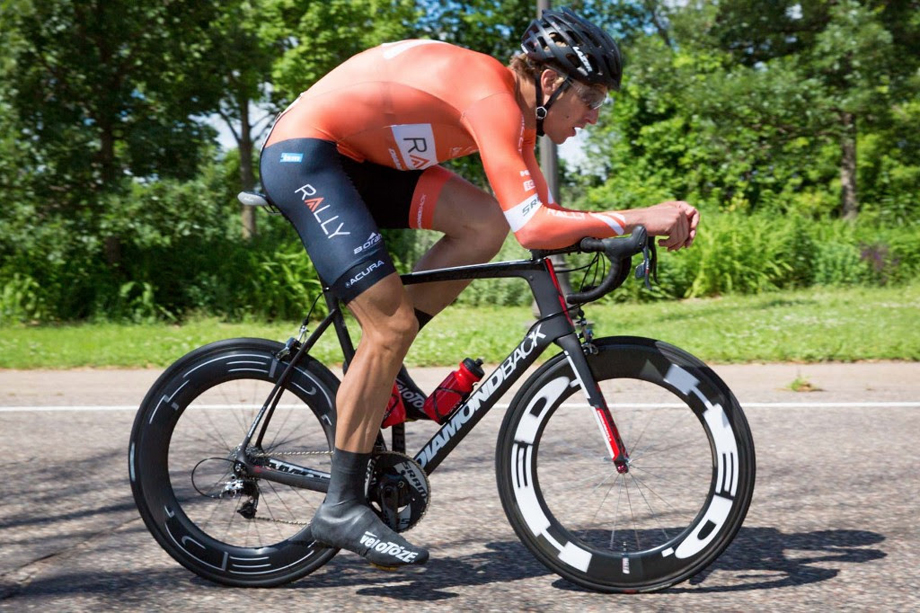 PEZ: What’s the track like?
Pretty damn fast! I had a lot of fun rolling around on such a smooth indoor surface. I did all of my training on an outdoor plywood track (which is quite fast in its own right!), so it was quite obvious that I could go fast at Aguascalientes after only a few laps on the track.

PEZ: There must be a lot of hoops to jump through – and costs: transport, accommodation, track hire, time keepers, medical control?
There is no way I could have pulled this off without the full support of my Rally Cycling team. It is such an enormous undertaking to do it the right way, especially when you have no contacts and a language barrier with the venue where you wish to attempt the record. I owe everything to the team for supporting me fully and allowing me to focus on this event solely for the final six weeks of the season. 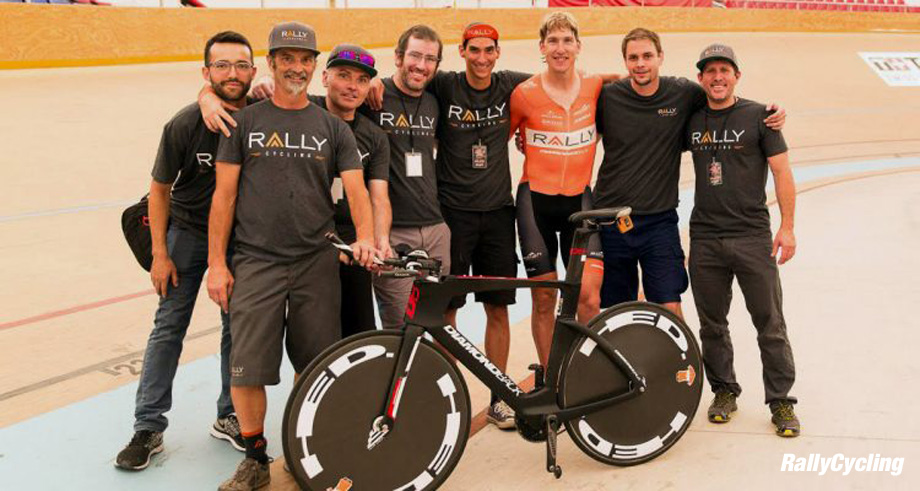 PEZ: How many of a team did you have down there with you?
Seven – mechanic, soigneur, director, videographer, media guy, liaison, and rider.

PEZ: Diamondback – it’s a long way from single track to The Hour!
I’m so impressed with how hard they’ve worked to develop high end racing bikes. I couldn’t be happier with how the Serios TT bike performs.

PEZ: Tell us about your wheels and tires – an ‘eccentric’ rear hub, I believe?
Yeah, we had to get creative so that I could do the attempt on my Serios, because it just has road dropouts. HED was nice enough to build me up a rear Stinger disc with the eccentric hub and pair it with their new Volo front disc that was used by the US team in Rio. 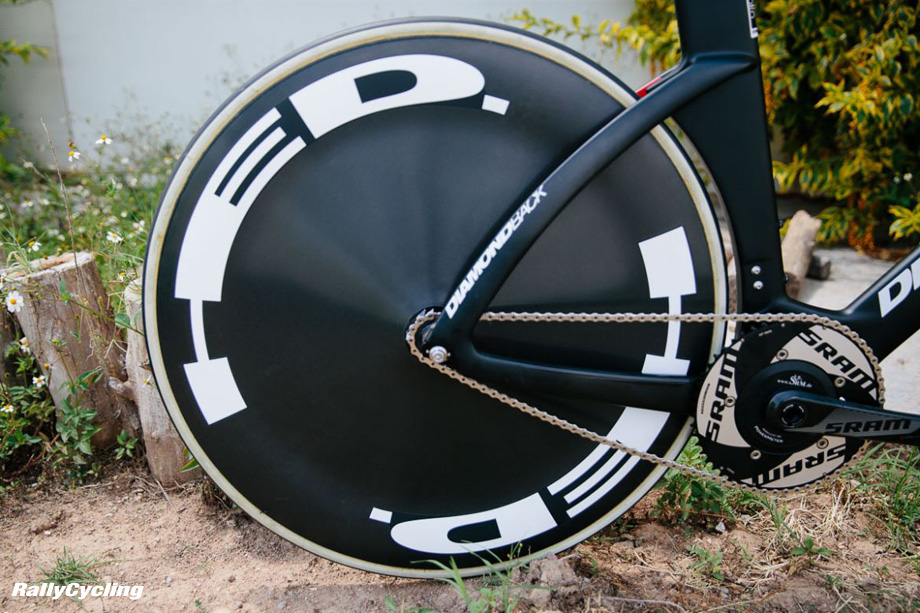 PEZ: Gearing of 53 x 13 – in retrospect was it a good choice?
Yeah, that was our best option. Ideally, I would have liked to use a 57×14 but a road pitch 57 chainring doesn’t exist to my knowledge so we would have had to fabricate one. If I did it again – which I won’t! – I would probably try to use a track pitch drivetrain for more big gear options.

PEZ: Any ‘trick’ stuff – a Ceramic Speed chain, for example?
We had our SRAM Red 11 sp chain prepared by Molten Speed Wax prior to the attempt. 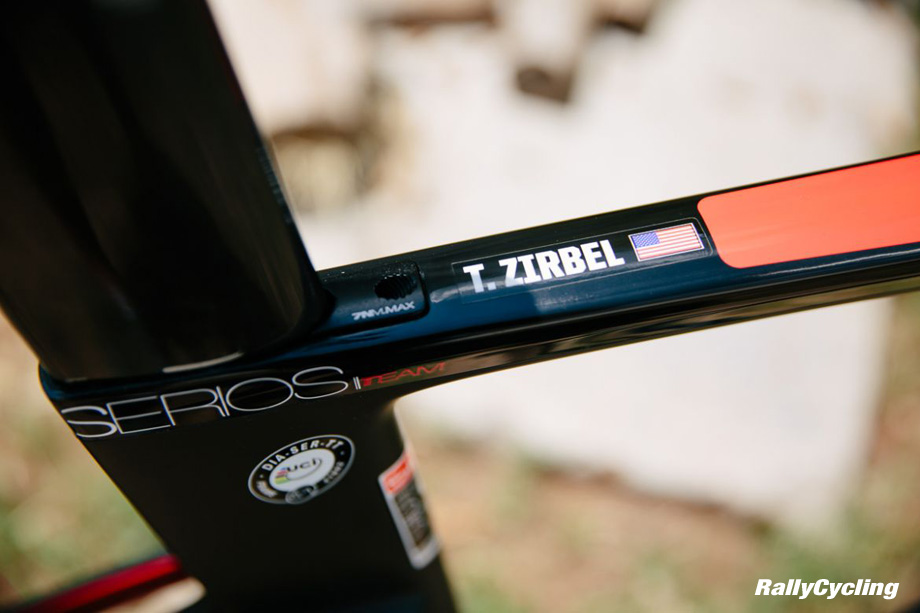 PEZ: Was your Borah skinsuit a custom job?
Nope.

PEZ: How did you set/maintain your tempo?
Based on a few efforts the days prior to the event, we set a fairly conservative pace for the first 20′ of the attempt. After 20 minutes I went by feel, getting splits periodically from Jonas to make sure I wasn’t straying too much one way or the other.

PEZ: Can we ask about your watts for the ride?
408w. On the low end of what I expected. Perhaps my power meter was reading a little low.

PEZ: You ‘lifted’ inside the last 15 minutes – that’s not easy to do!
Well, we knew that the American Record was well within my reach as long as I didn’t detonate late in the ride. Perhaps we were a little too conservative early on but I don’t know – I was pretty messed up by the end of the hour. 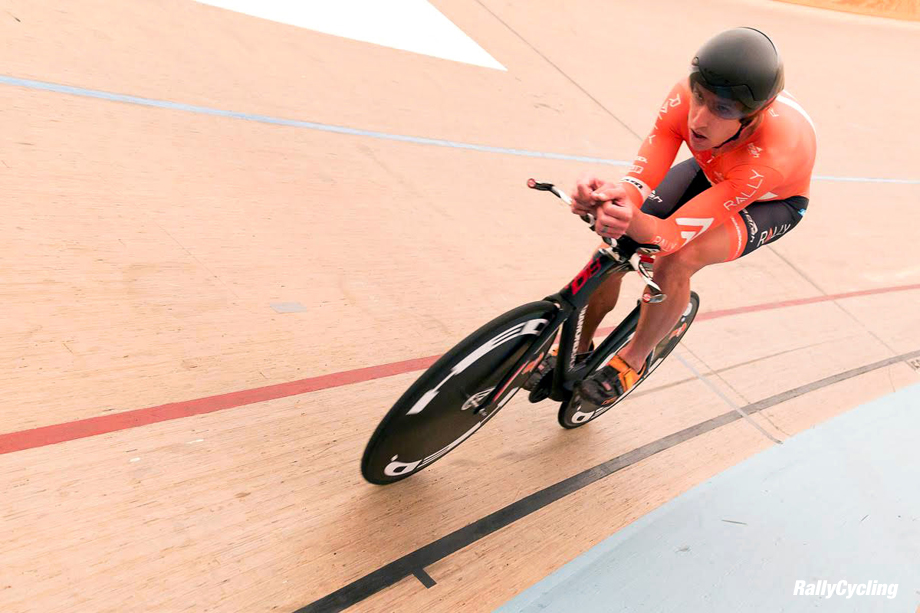 PEZ: What hurt quickest and most?
Mentally, seeing that lap counter every 17s and knowing how far I have left to suffer was more difficult than I anticipated.

PEZ: Wiggins’ distance – your thoughts?
Attainable. But not by me! I hope this effort puts the Hour back on the radar again. I think a lot of people, including me, viewed 54.5 km as superhuman, but now I see that it can be beaten under the right circumstances.

PEZ: How were you after the ride?
My back and glutes tightened up so badly that I could hardly stand up straight for a while there. 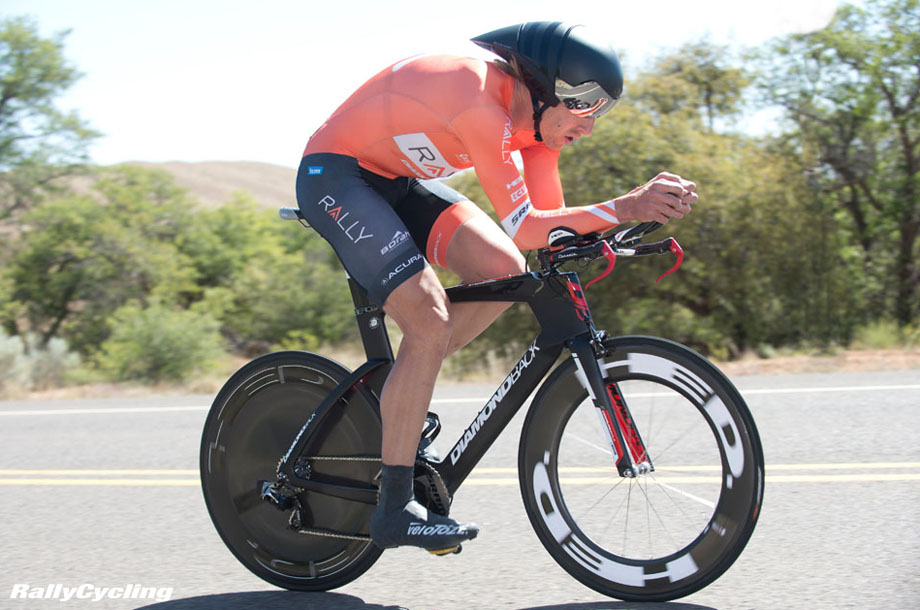 PEZ: Celebrations?
We went big that night! Everyone was so professional throughout the week that when it was finally over and we had attained our goal, there was much revelry, we’ll say.

PEZ: And that’s definitely your last effort as a pro cyclist?
Absolutely.

PEZ: And looking back over your career, anything you’d have done differently?
No, I’ve made plenty of mistakes and have gone through some severe ups and downs, but I’m really content when viewing my career as a whole. I think it’s a gift to have been able to experience life as a professional cyclist all these years. I’m very grateful for the whole experience.

# We wish Tom the best of luck along whatever career path he now chooses and congratulations again on a great career. # 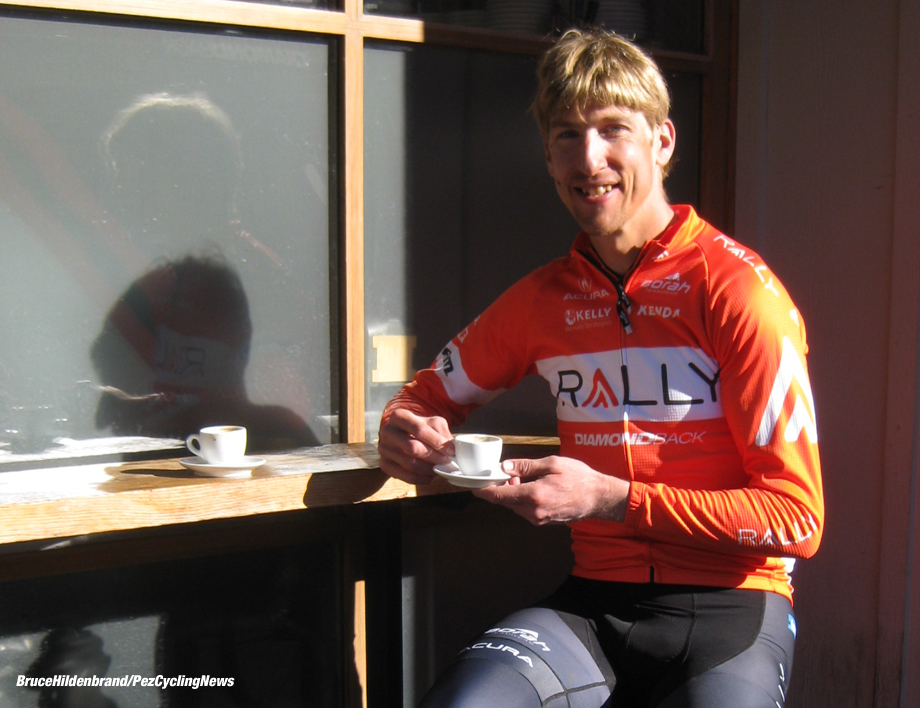 Sidi Scores a Triple at the Giro Dell’Emilia