Rider Interview: Multi World champion at 23 years-old, there are not many people who can make that claim, but Chloe Dygert Owen from Brownsburg, Indiana in the USA can. From junior World road race champion in 2015 to elite World individual pursuit champion in 2020, with quite few in-between. 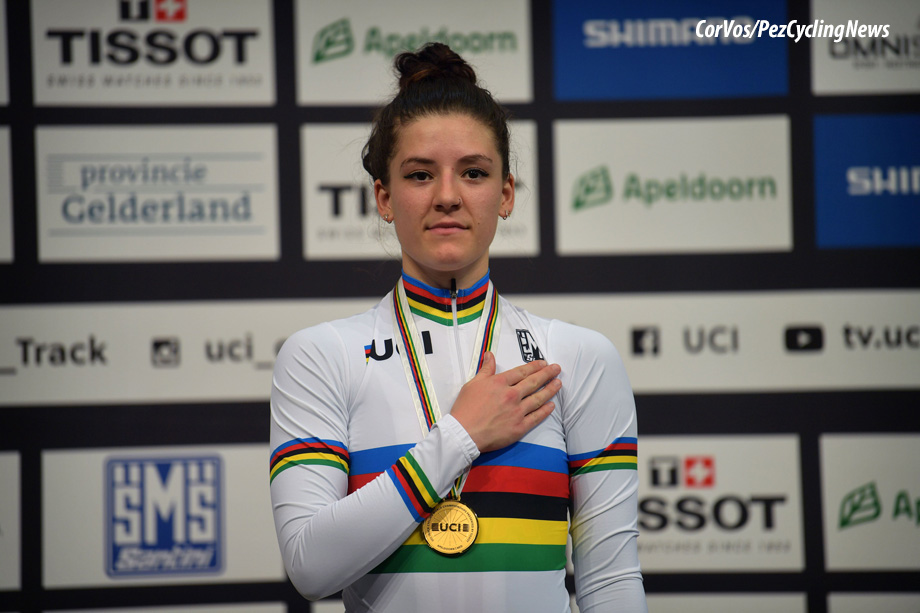 How long a career do you need to have to win 10 [yes ten] World titles? US ‘chrono girl,’ Chloe Dygert Owen has won that many and she’s still only 23 years-old; and there are two Pan Am golds and an Olympic silver in the dresser drawer too. High times we, ‘had a word’ with the young lady out of Indiana. 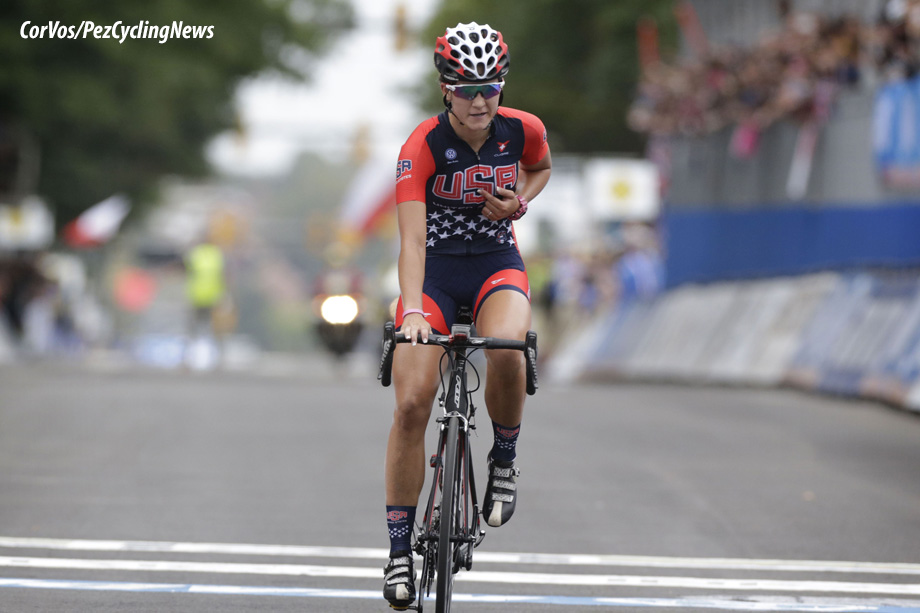 PEZ: How did you get into cycling, Chloe?
Chloe Dygert Owen: I got into cycling in about 2015. Cycling was always something we did in my family growing up but I didn’t start racing and really starting my career until 2015 because I was another sport athlete in school. 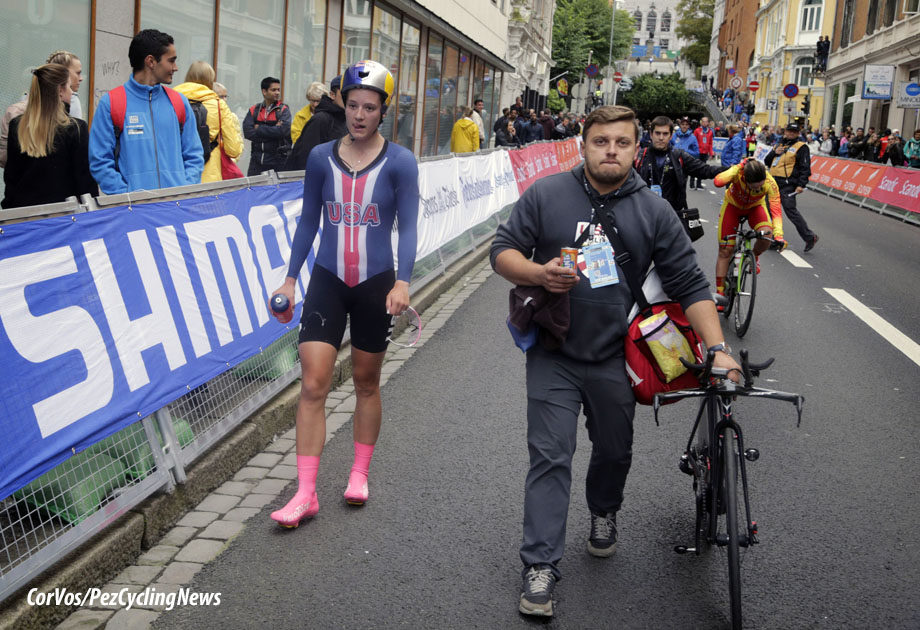 PEZ: You exploded on to the scene – 2015 US and World junior road race and time trial champion – who was your mentor?
At that time my motivation was to be the best and to win. But, I was on team Twenty16 on the development junior squad and I did know about Kristin Armstrong at the time; I remember at junior nationals she gave me a signed rider card telling me good luck. I thought that was very special and since then we’ve been friends, teammates and now she’s my coach. Same with Sarah Hammer she was there for my first day on the track and I was there for her last. I would have to say, them both have made pretty big impacts on how my career has been guided. 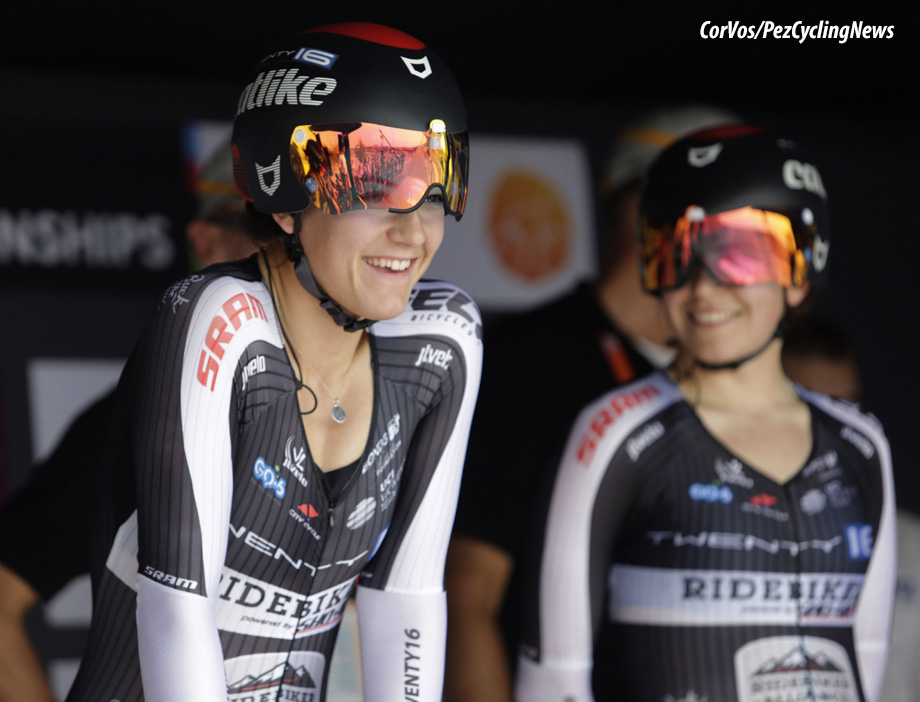 PEZ: The 2016 Worlds team pursuit champion – you took to the discipline very quickly.
I love being thrown in the deep end. If I’m learning something I hate starting out as a beginner, just let me do it how everybody else’s do it and I’ll learn it faster. And that’s one thing that I really respected and liked about our coach at the time, Andy Sparks, he believed in me and treated me as if I was already a part of the team which made my entrance so much easier and that’s how I was able to learn so fast. That, along with the help of the team. 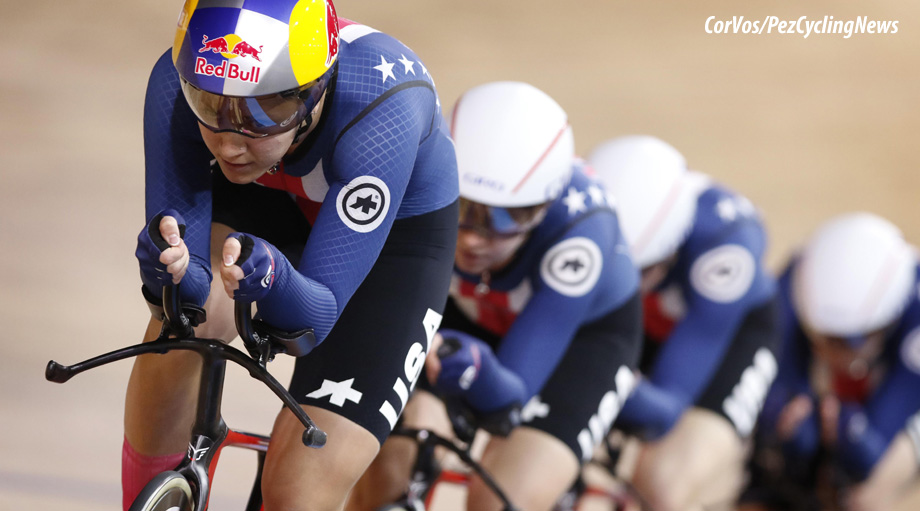 PEZ: Olympic silver in the 2016 team pursuit – bitter/sweet after your Worlds victory?
It’s always hard to lose. Not a day goes by that I don’t think about it, but again it’s in the past we can only change what will happen in the future. And I know we are doing everything we can to make sure that doesn’t happen again. 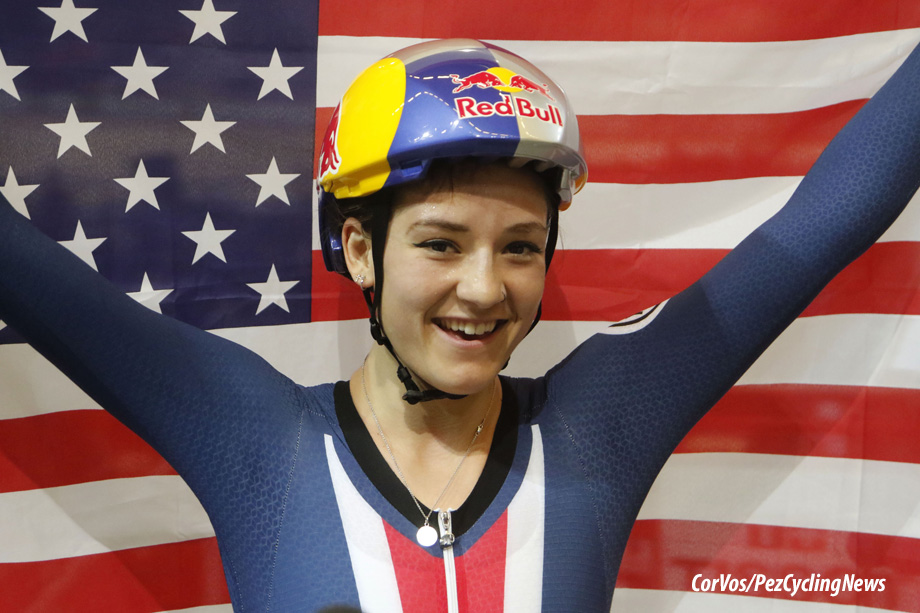 PEZ: Season 2017 ‘the double’ track titles, individual and team pursuit – a lot of warming up and down, focusing and racing to contend with?
I guess I’m just so used to doing the events that I’ve done that I don’t really think about the process, I just do what needs to be done so I can win. 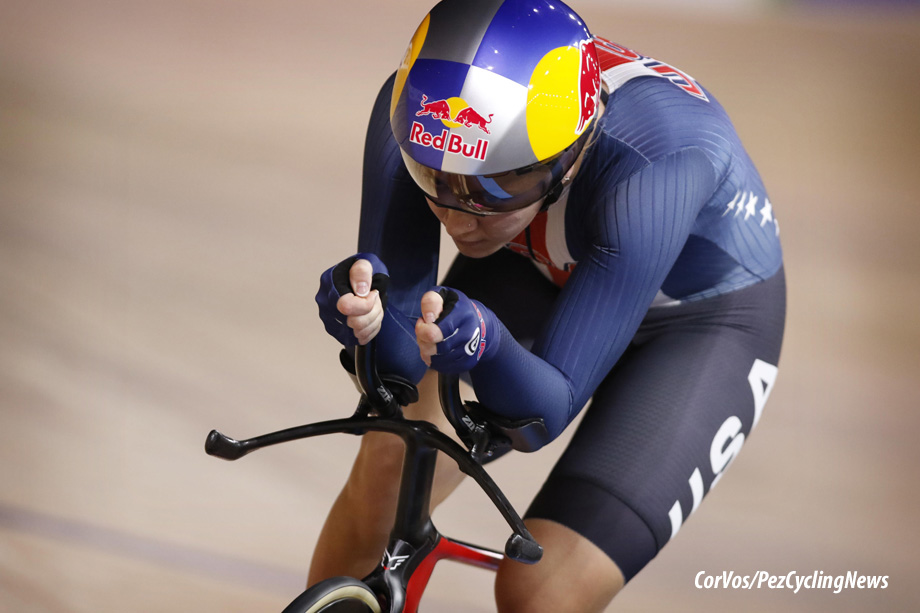 PEZ: The following year, 2018 the same again, they say it’s always harder to defend than to win for the first time?
Even if I win by seven seconds or even 0.7 seconds it’s not so much that I’m racing another person it’s that I’m racing myself. I was definitely more upset this time around as I wanted to break a faster time. It was probably more of me being upset about it rather than it being harder to get the win. Especially in the team pursuit we were closer to getting silver in 2017 than we were in 2018. And I didn’t even break the world record in 2017. 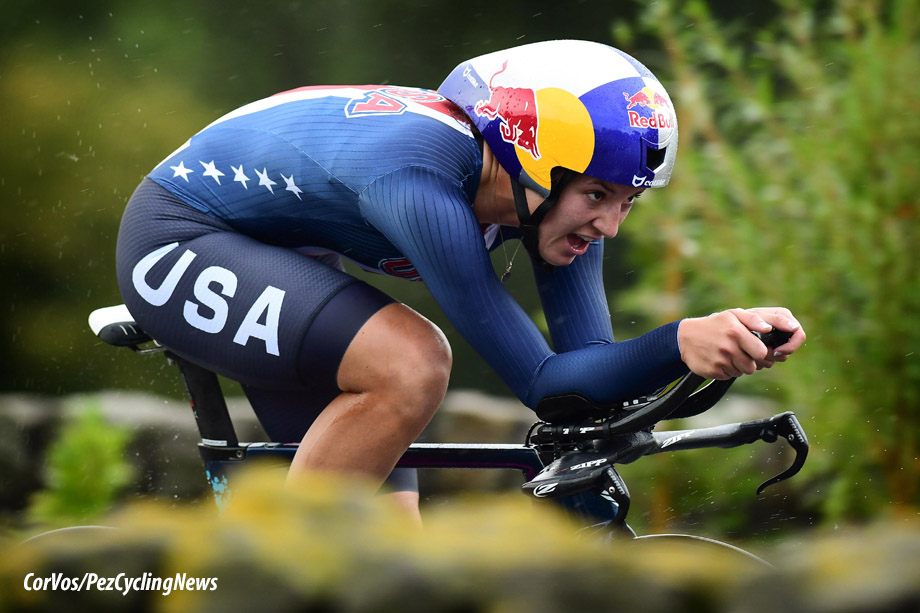 PEZ: Then 2019 and no Track Worlds?
I was still dealing with my concussion and I had a knee surgery a month prior so I wasn’t able to attend. 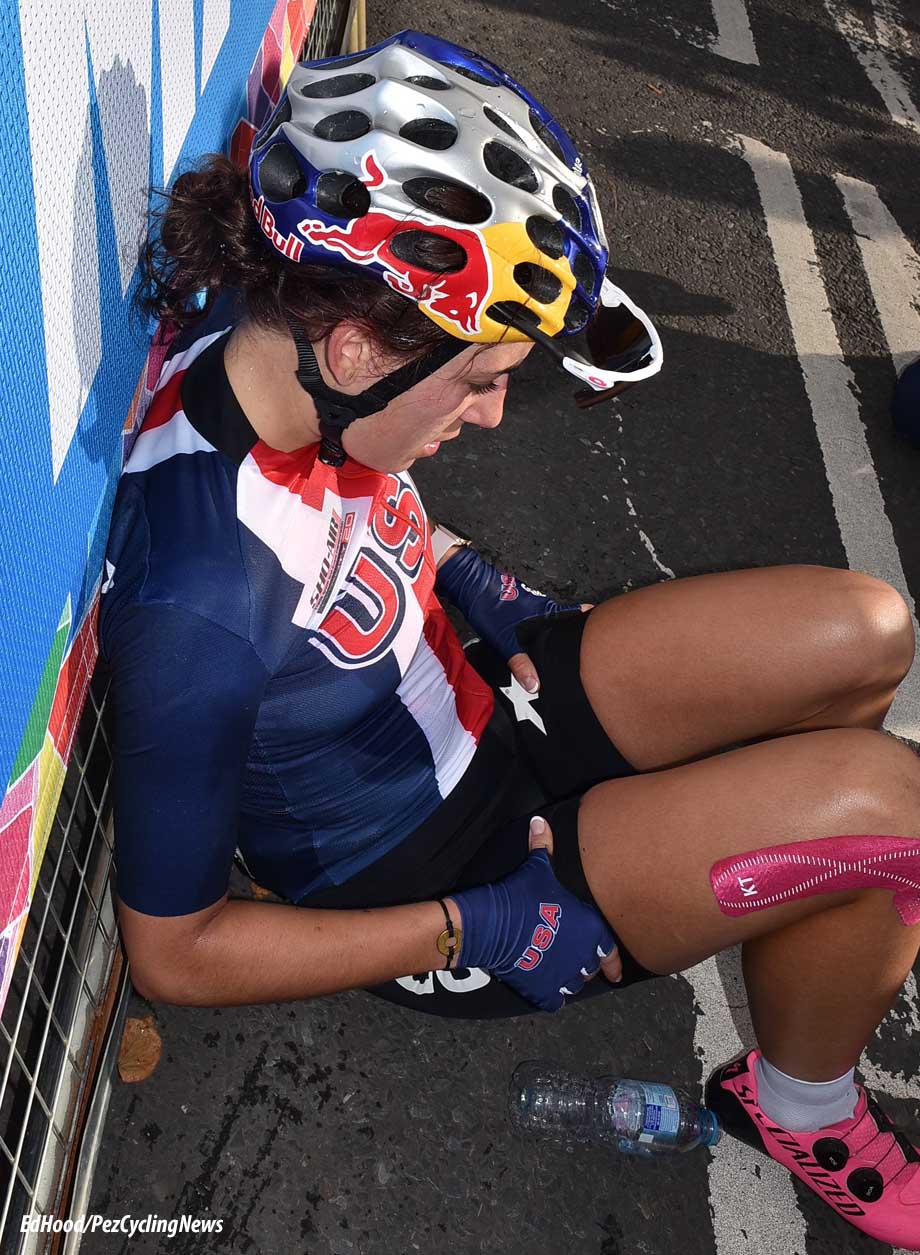 PEZ: Last fall, 2019 Harrogate – that was an impressive TT but how difficult is it for you to change from track to road and vice versa?
Again I think this is something that I’ve done my entire career going back-and-forth so it really wasn’t much of a change for me. I have the best coach for the time trial and the best coach for the track so I know I’m in the best hands no matter what. 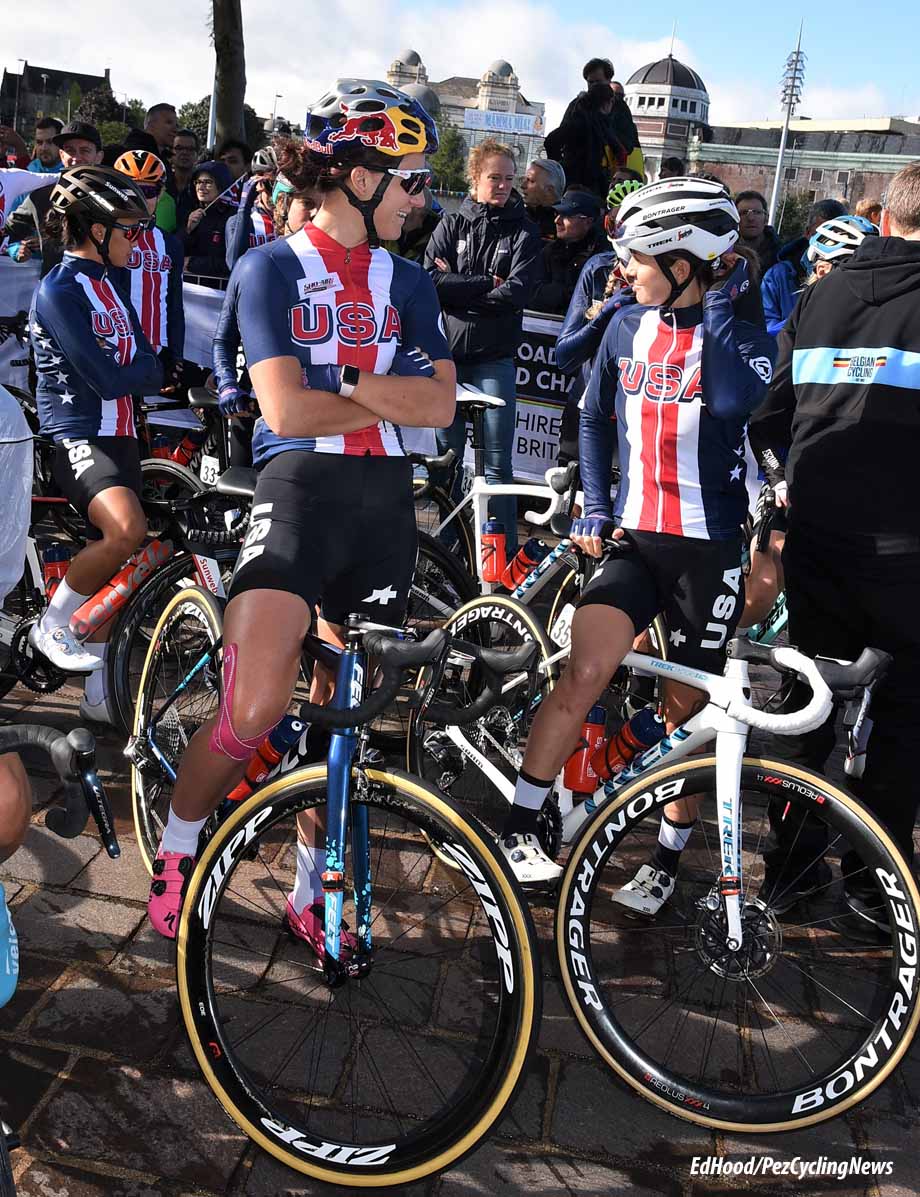 Start of the Worlds road race

PEZ: Harrogate and the road race; that was one ‘hard day at the office’ for you. . .
The Road race was the hardest and longest race of my entire life. I remember taking a few hours in my room to just calm down and get back to normal. I was so empty in every way imaginable; I was hungry I was tired I was thirsty. I just didn’t do my nutrition right during the race and that really hurt me. 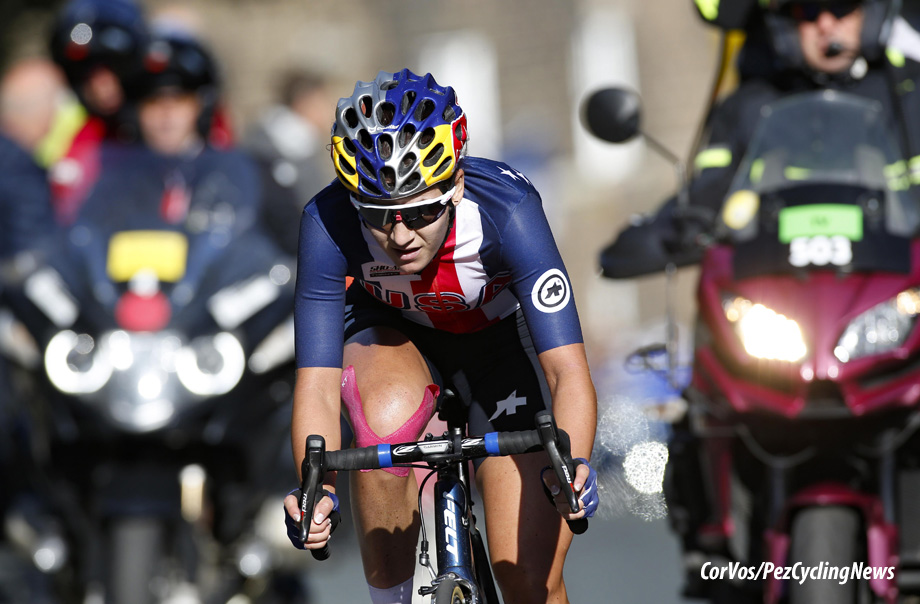 PEZ: This year, 2020 and another track Worlds ‘double’ – still as a much of a thrill?
I don’t want this to sound cocky but winning it’s just an expectation now I would be more upset about losing then I would be about winning.

PEZ: Tell us about those ‘reversed’ Felts please – how do they compare to your previous steeds?
Do you know when you can get on the bike and just tell it’s fast? That’s how I feel on this Felt. It’s been so long since I’ve ridden anything else I can’t really give you an accurate description of what the other bike feels like compared to this new super bike. 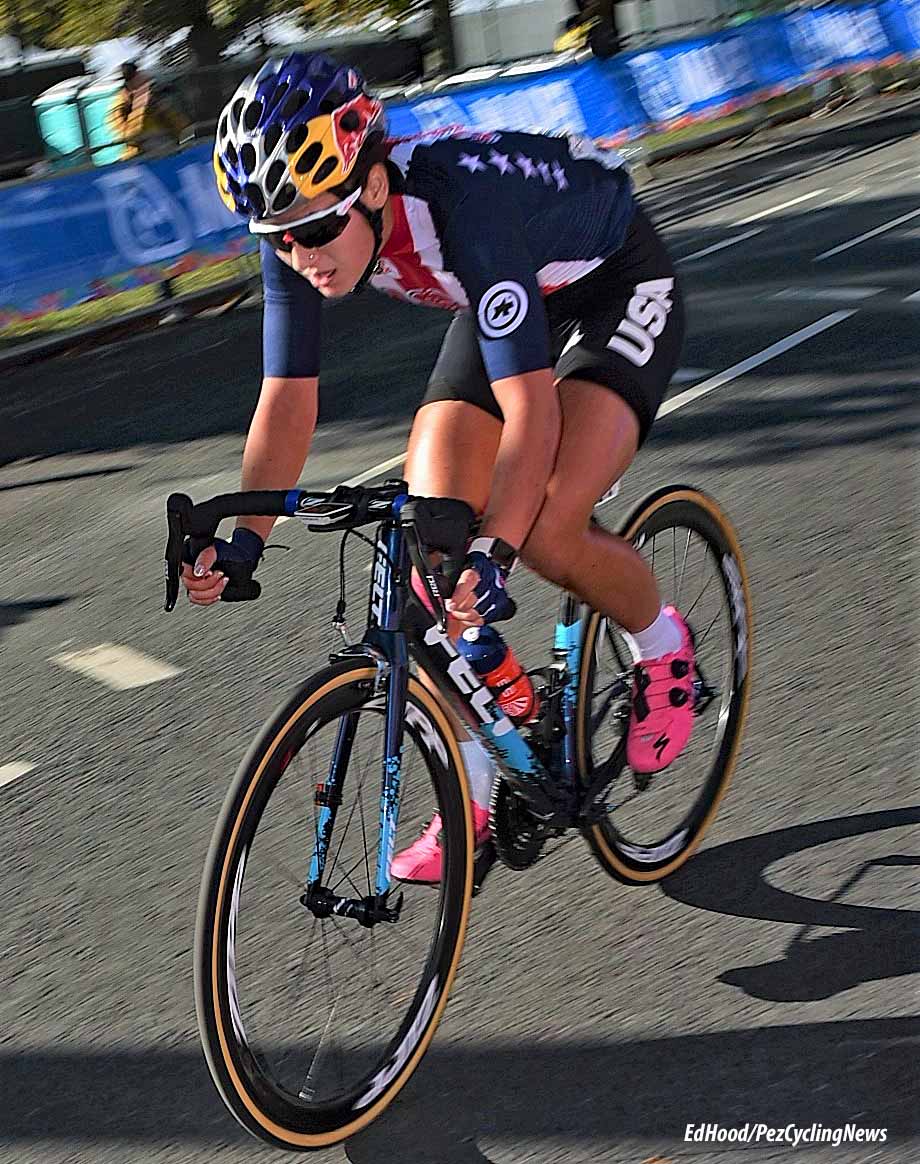 PEZ: I’ve read that your goal for the individual pursuit is sub 3:10?
Yes, I saw the junior boy run sub 3:10 – and if he can do it I wanna do it! [The world junior pursuit record is held by New Zealand rider, Finn Fisher-Black who returned 3:09.710 in the NZ u19 championships on the Avantidrome, Cambridge, ed.]

PEZ: Gary Sutton is the National Coach but do you have a coach with Twenty20?
Yes, Gary is the Track Coach, and I work with Kristin Armstrong on the road. 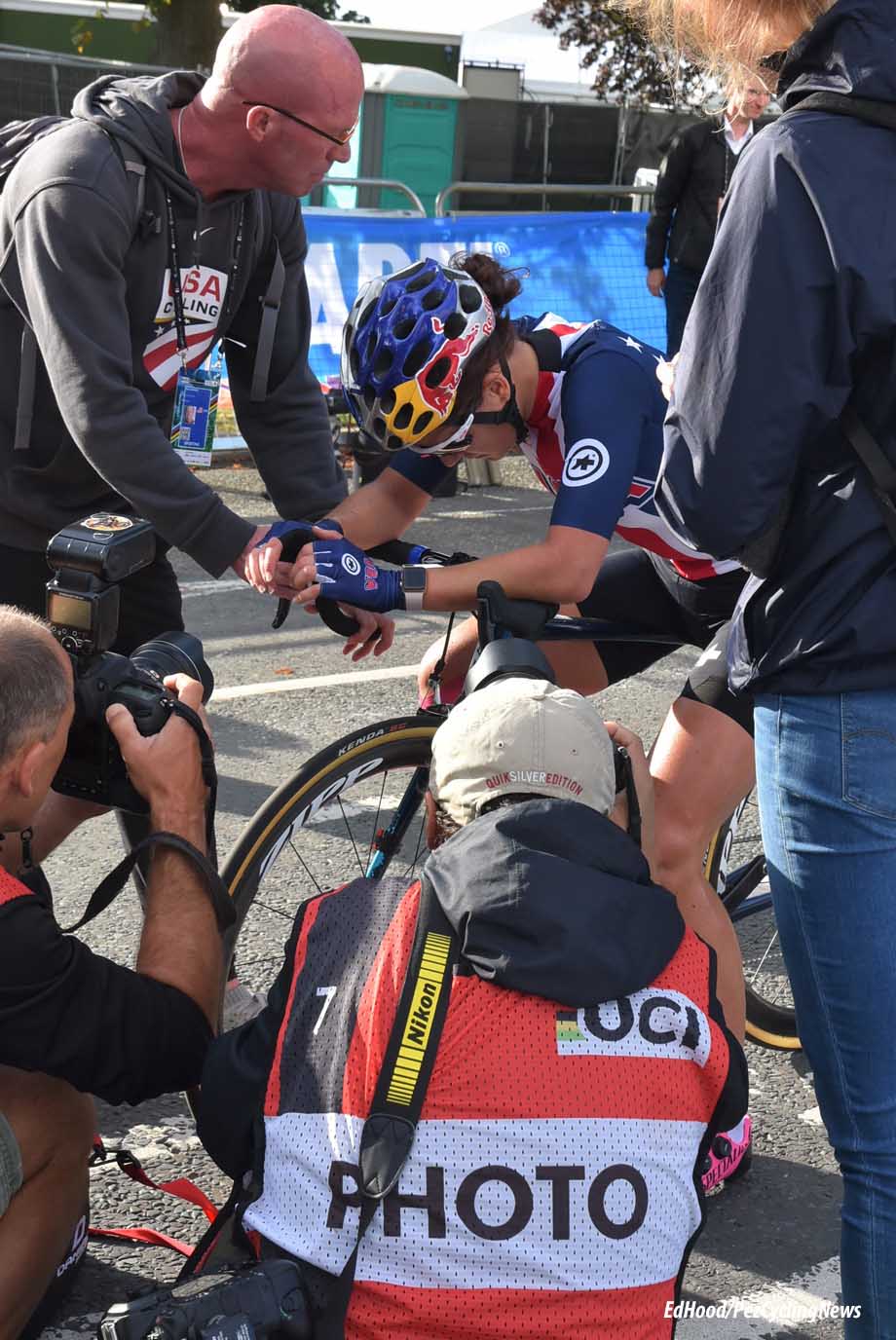 The Media want that photo

PEZ: Twenty20 is a US domestic team; but would you like to ride the European Classic races?
I would love to get a chance to race over in Europe. I think in the next few years that will happen but as of now my goals are pretty specific and I am sticking to them.

PEZ: Tokyo, that must have been a disappointment, how are you dealing with the uncertainty on when/if the Games will actually take place?
I am so used to sitting back because I get injured so much that this really hasn’t made too much of a stress impact on me. I’m just thankful that it’s not an injury and it’s just a postponement. And this also gives us more time to prepare and get things even more ready for the games next year. 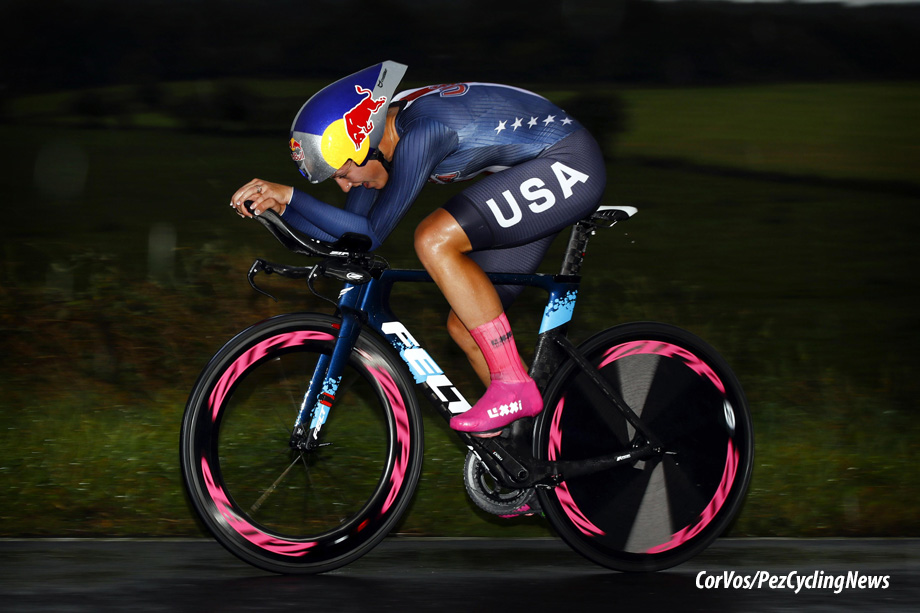 PEZ: What’s top of the ‘to do’ list?
I just want to be the best, I want to do anything and everything that will make me the best.

# With thanks to Chloe and to Mike Engleman for connecting us with her. # 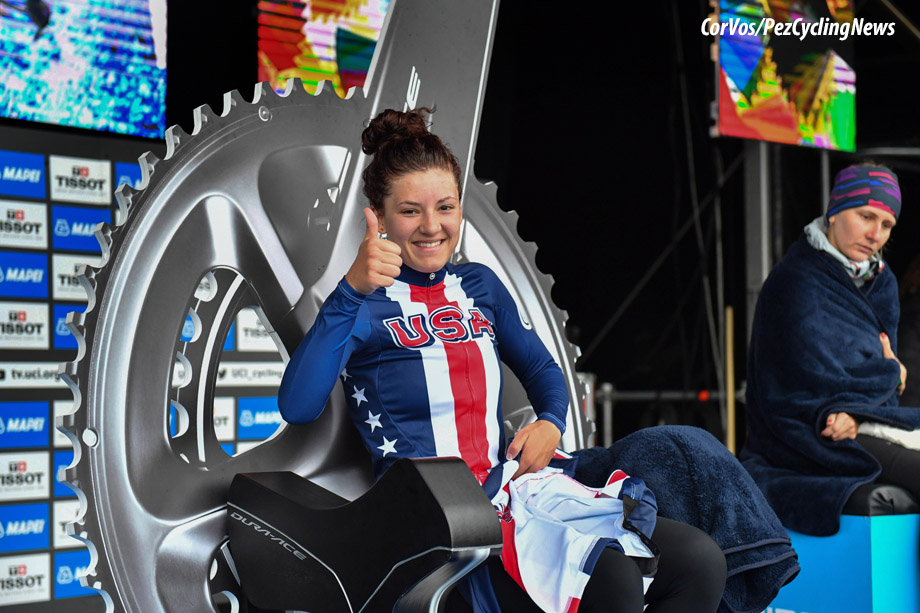 In the ‘Hot Seat’