Retro Rider Interview: The USA has a great history of track riders, from the early days with Arthur Zimmerman and Major Taylor through the years of Connie Carpenter-Phinney, Steve Hegg and Nelson Vails to the modern day fast riders. Back in the 70’s there were the Barczewski brothers, Ed Hood caught up with Leslie Barczewski to hear his story. 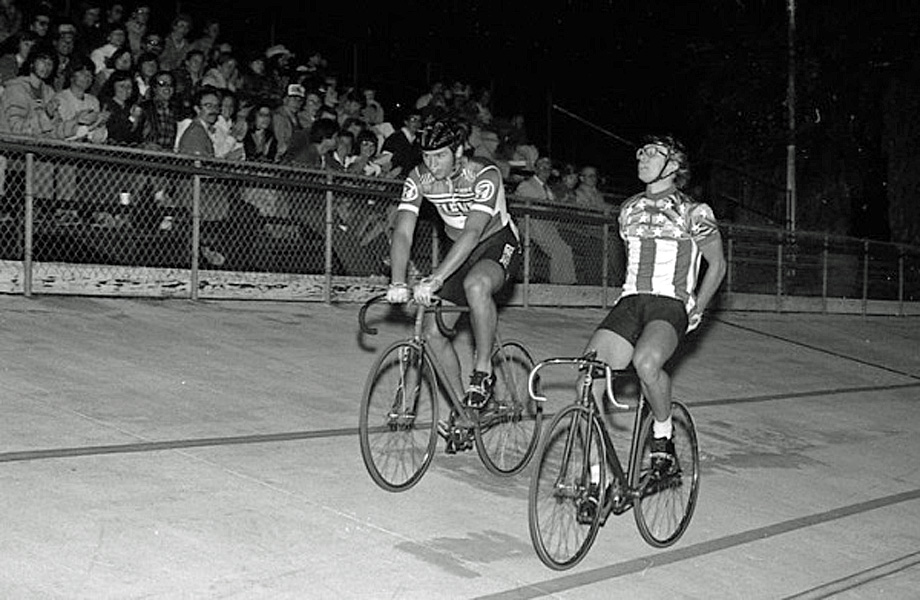 US track sport has undergone a revival in recent years thanks to their highly successful ladies team pursuit squad with the likes of the rapid Jennifer Valente, omnium and individual pursuit star Sarah Hammer and seven times world champion protégé Chloe Dygert; not to mention world’s fastest man over four kilometers, Ashton Lambie. But since those golden days of big Marty Nothstein the US velocista haven’t been hitting the headlines in sprinting.

And then, of course, there were the Barczewski brothers. Leigh and Leslie; Leigh rode the 1976 Olympics and in 1978 took tandem silver at the Worlds with Gerry Ash; the palmarès websites will have you believe that he took tandem silver again with Nelson Vails in 1985 but it was actually little brother Leslie who paired with 1984 Olympic Sprint silver medallist outta NYC, Nelson Vails to take that ’85 silver – here’s little bruv’s tale: 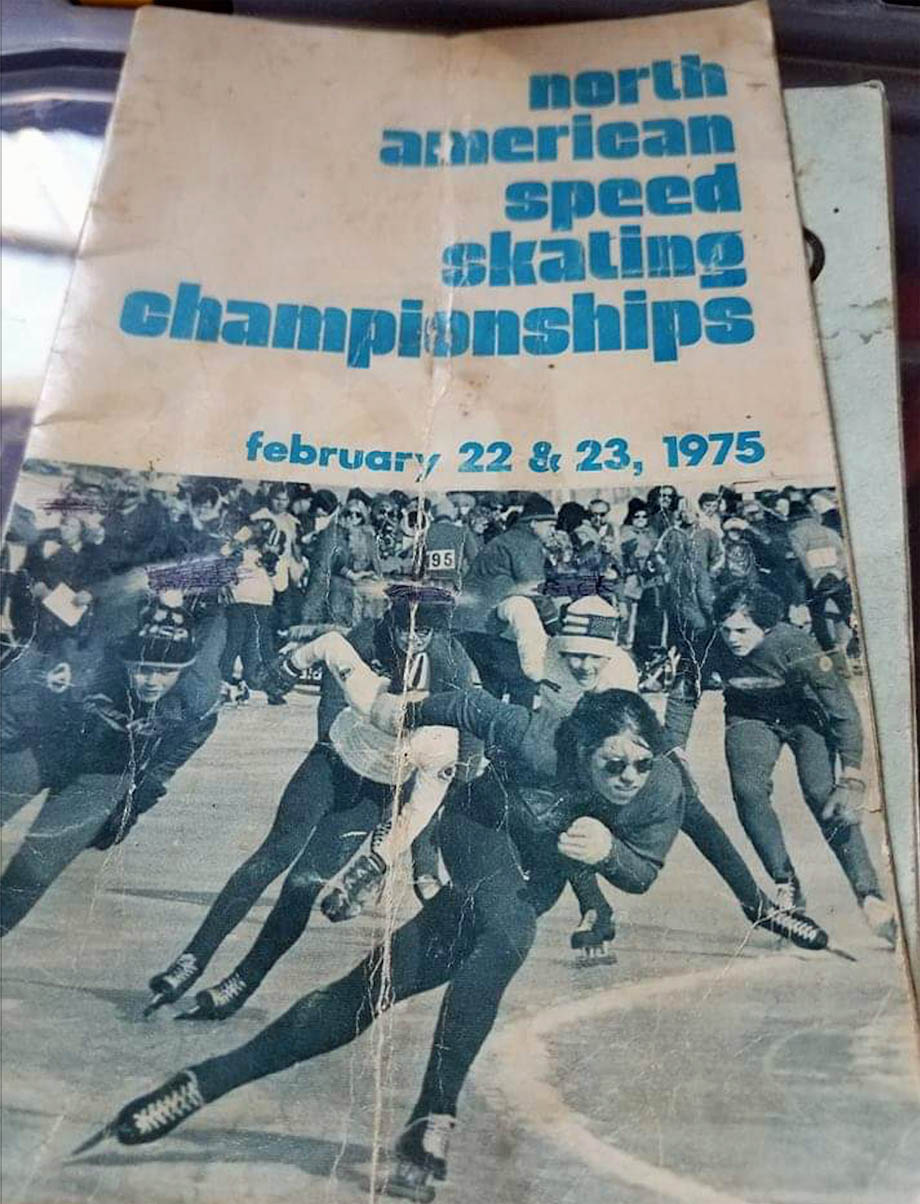 PEZ: How did you get into the bike, Leslie – and why sprinting?
Leslie Barczewski: I grew up in West Allis, a suburb of Milwaukee and I have to tell you that the state of Wisconsin is the speeding skating epicenter of the world. Sheila Young (who won speed skating and cycling gold world championship medals in the same year, ed.), Jim Ochowicz (who raced himself and has been involved in the management of teams cult US team 7-eleven right up to the present moment with CCC, ed.) Eric Heiden (perhaps the greatest ever speed skater, winning five golds at the 1980 Lake Placid Olympics before joining the 7-eleven team, finishing the Giro and winning the US Pro Championships, ed.) and Connie Carpenter (competed in Olympics as a speed skater at just 14 years-of-age; won the cycling road race at the LA Olympics in 1984, was World Individual Pursuit Champion and is Tyler Phinney’s mother, ed.) – they’re all out of Wisconsin. My brother, Leigh got into speed skating and I followed, then in 1970 a buddy took me to watch the bike racing at the Milwaukee Velodrome. TI Raleigh had Gordon Johnson the Aussie World Professional Sprint Champion on a promotional tour and when I saw him it was like I was in the presence of a god-like being – I was hooked.

PEZ: In 1974 you rode the ‘European’ Junior Sprint Championships, which would become the World Junior Sprint Championship in 1975.
Yes, I was fifth but the Italian, Giuseppe Saronni (yup, the same one! ed.) crashed me twice – the commissar was Italian and wouldn’t do anything about it. They were bad crashes, my head hit the track. My team mate, Gibby Hatton beat him in the final to take the title. 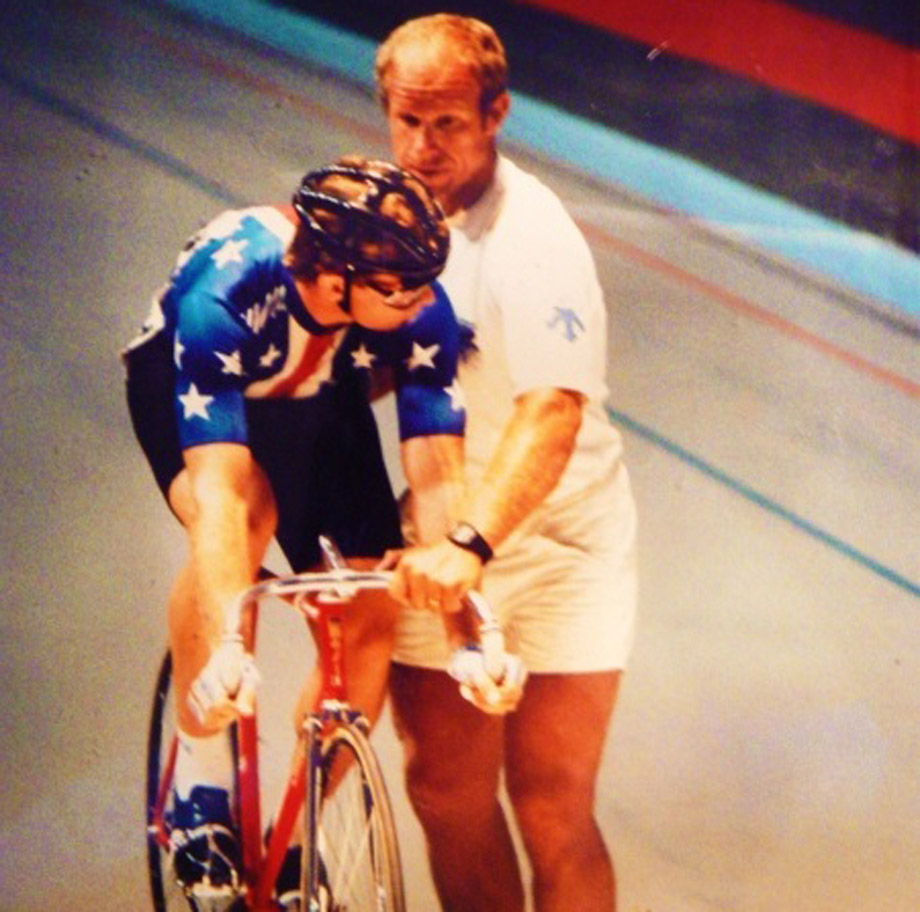 PEZ: You rode the ’79 tandem Worlds with your brother Leigh?
Leigh’s usual partner, Gerry Ash with whom he took Worlds tandem silver in ’78 had a really bad crash, he almost died and wasn’t fit enough to ride the Worlds so our coach, Jack Simes paired me with Leigh. But in the individual sprint at the Worlds the Aussie, Kenrick Tucker (twice Commonwealth Games Individual Sprint Champion, ed.) rode me off the track, my front tyre blew and I came down hard. As a result of that crash, when it came to the tandem sprint, I was worthless – but the experience did spark my love for tandem racing. What was kinda cool though was that when we were up, the score board at the track said: ‘Barczewski x 2’. It was a neglected side of the sport but at Trexlertown Velodrome they used to have a ‘tandem night’ which was always good racing.

PEZ: No ’80 Olympics for you, that must have been a disappointment?
Leigh retired that year and whilst I was a big fan of Jimmy Carter (US President of the day) I think he received bad advice when he decided that the US should boycott the Games. 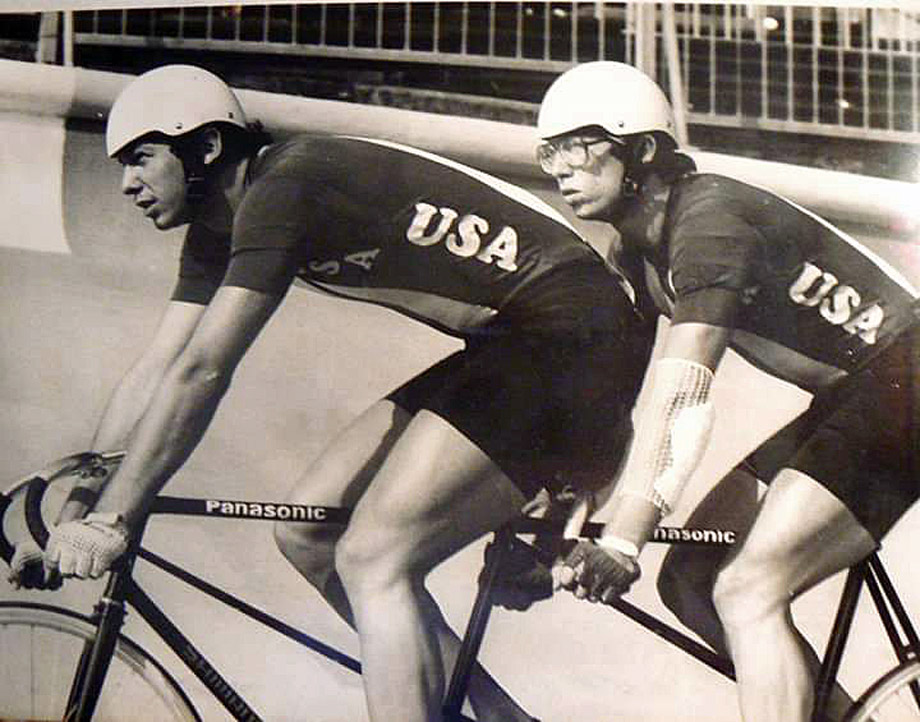 PEZ: Nelson Vails became your tandem partner but he went to the LA Olympic Games in ’84 with Mark Gorski with you left out as third man.
I was first paired with Nelson in 1981 – within two days you could see we were going to be quick together. In ’83 I was second to him at the Pan Am Championships individual sprint; I enjoyed some of my best days at those championship riding 10.7 and 10.8 outdoors on concrete which was quick back then. In ’84 I was third to Gorski and Nelson in the trials so didn’t get to ride at LA, I was very disappointed and ready to walk away but Eddie B (Eddie Borysewicz, legendary US track coach, ed.) spoke to me for two hours and convinced me I couldn’t end my career like that. From that point onwards I dedicated myself to the tandem with the US Federation buying us a really nice road tandem for training on – a Mike Melton but decaled Raleigh.

PEZ: Worlds tandem silver with Nelson Vails in ’85.
The wisdom was that as stoker – which I was – your training should be like that of a kilometer rider so that’s what I did. And we were going well on the Grand Prix circuit; I really felt we were in with a good shot at the Worlds. But our last training session before the Nationals our coach talked us into doing just one more sprint – we’d already done five or six on the solos and four or five on the tandem – we were tired but we did it and a tyre blew out. I had concussion and Nelson was injured for two months – in the Worlds we just ran out of gas in the final. That was very frustrating but at the same time we were very proud. When we got on the Aeritalia 747 to come home from Bassano del Grappa, the baggage handlers saw the bike and asked if we could come back off the plane and have our photos taken with them – that was cool. 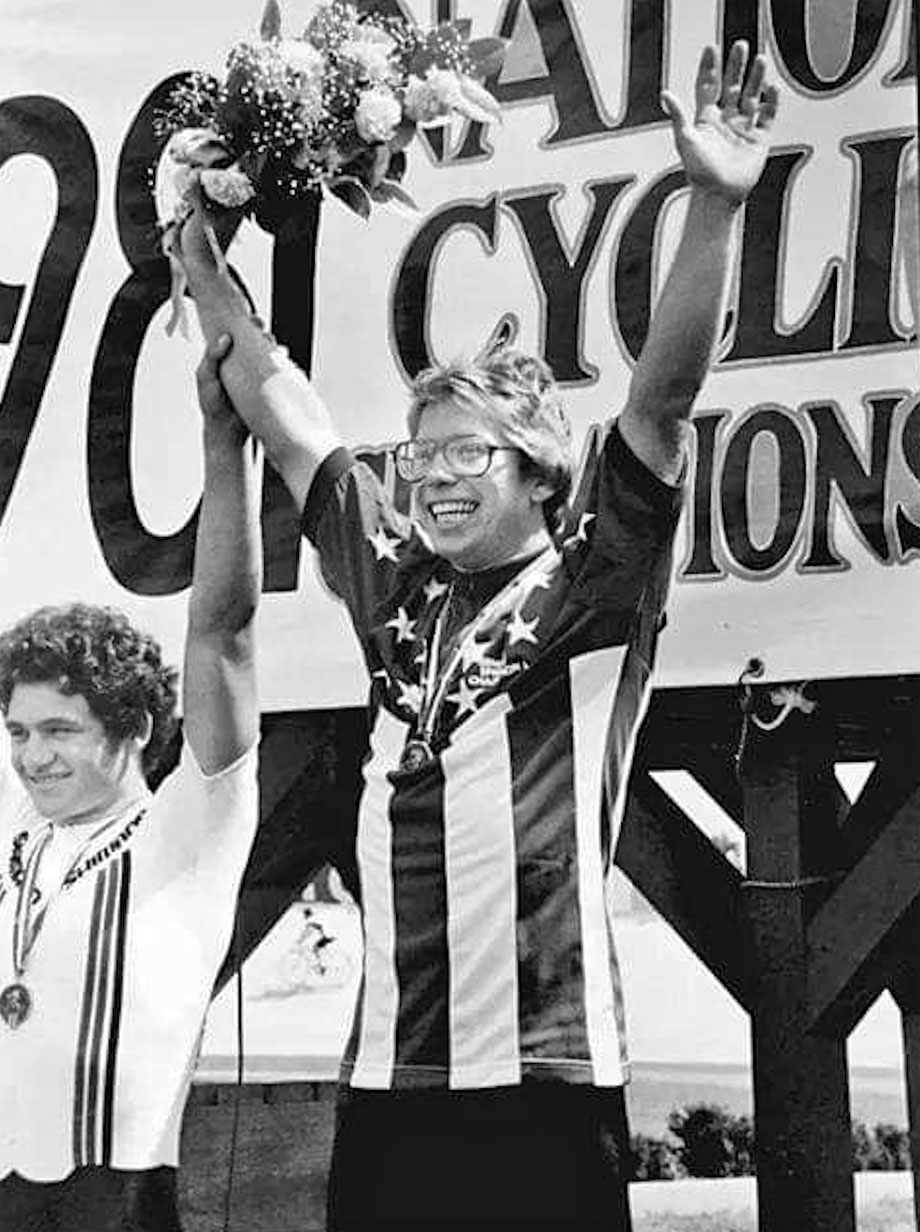 PEZ: US silver again in the tandem Worlds in ‘86 – but not you and Nelson?
The short version is that there were a lot of politics going on that season, the Fed. didn’t rebuild our tandem, we broke a chain, I become very nervous and was sent home. The guys who won, Kit Kyle and David Lindsey weren’t big names but did well to get their medal even though there were only six teams entered, one of whom was Greece and the French crashed out in qualifying. I turned pro and rode the pro Worlds sprint; Nakano won it and I ended up seventh after qualifying third fastest with a 10.74. 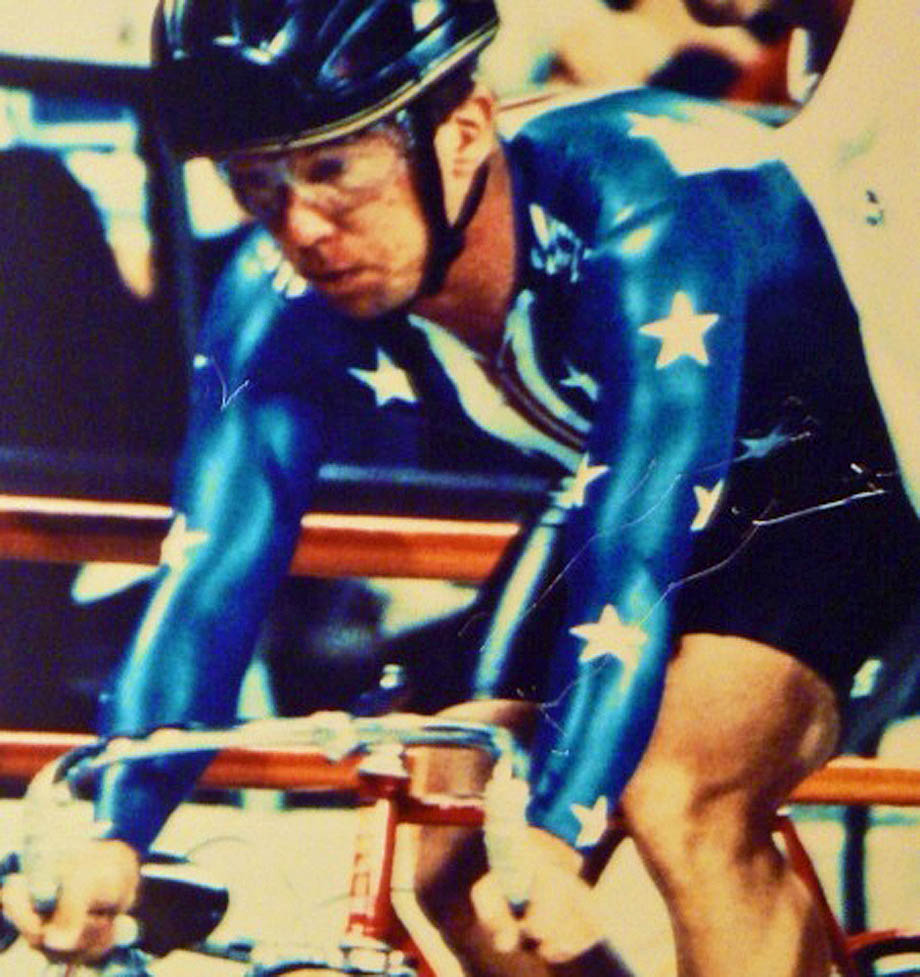 PEZ: And you broke the professional World 200 meters record.
Interesting story that. . . They held a record attempt at the Colorado Springs Velodrome with four of us breaking the old record of 10.778 which a Colombian guy had set in Mexico City the previous year – I was fourth fastest with 10.723. A whiles later I was asked to go and meet the organizer; so he slides a cheque across his desk to me for $1,500.

It transpired that the three guys who were quicker than me had all tested positive so I had won – but I only got the cheque if I kept that to myself as they didn’t want the bad publicity. That was the end of my career. 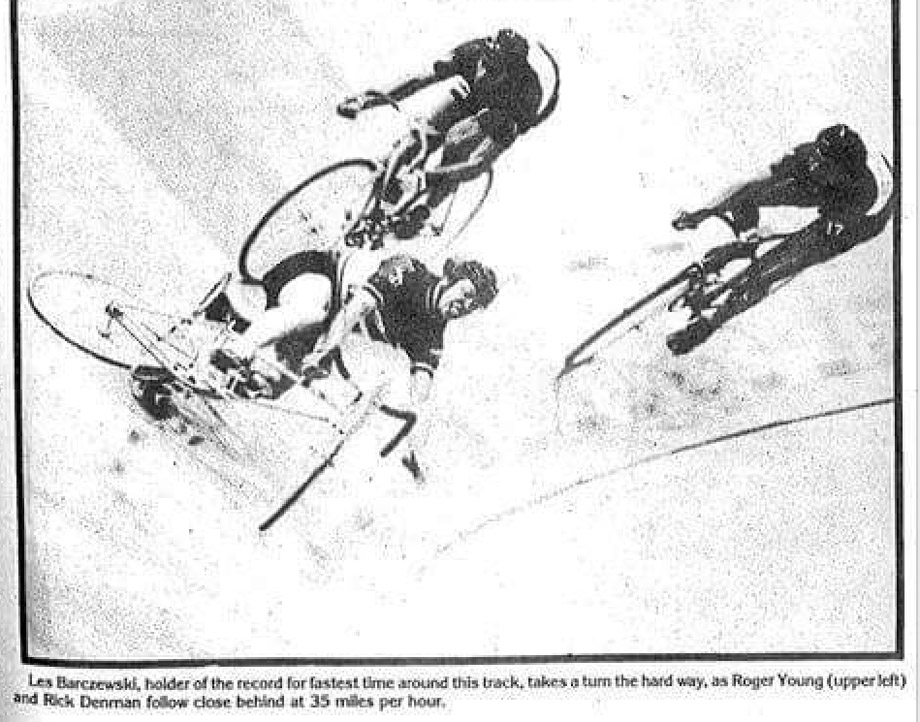 PEZ: What did life hold for you after the bike?
I coached for the US ladies team, worked for Falcon bikes, set up a hair dressers salon for my wife, worked real estate and now I drive tankers, hauling gas. Two years ago I had a brush with cancer but had chemo and so far, so good. I ride the bike but am astounded by the changes in the technology. I go out for pleasure with a good group in San Antonio; Raul Alcala (Mexican ex-pro Tour de France stage winner, ed.) goes out with us sometimes.

PEZ: Any regrets about your racing days?
I think it came too easy in speed skating and cycling, I relied on talent too much. . . but I did have some plain darn bad luck!

# Big old concrete outdoor tracks, crashes, dodgy Italian officials, rough and tumble Aussies, Eddy B and tandems – the good old days, how we miss them… With thanks again to Leslie. Photos supplied by Leslie Barczewski. #