I’ve met quite a few Neo-Pro’s and aspiring amateurs in my time, but I’ve never interviewed one as keen as Vacansoleil-DCM’s new signing for 2012: Bert-Jan Lindeman. I met up with him in Calpe, thanks to Martijn Verschoor; both riders were on a pre-Christmas training camp. Bert-Jan had just got back from a five hour training ride, but it sounded more like a seven hour ride to me! If enthusiasm is any gauge of success then young Bert-Jan should do well.

PEZ: You were a stagiaire with Vacansoleil-DCM last year, what was that like?

Bert-Jan Lindeman: It was a great opportunity, and the team was great. Lots of races, really a lot! But it was good. Of course, I was nervous, I didn’t want to look bad, you know, sometimes you only get one opportunity and you have to take it. 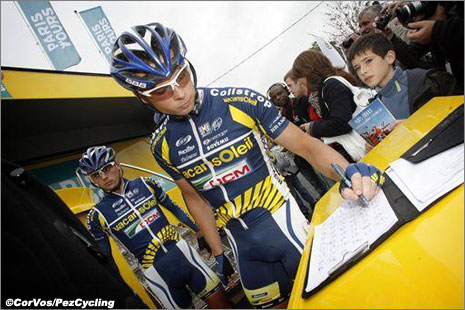 Bert-Jan signs in for some racing while riding as a stagiaire for Vacansoleil last season.

PEZ: Before that you were riding with the Under 23’s?

Bert-Jan: Yea, I was riding with the Jo Piels Cycling Team, there were lots of the team riders staying in Benidorm just down the road here for training last year. You probably saw us?

PEZ: Yes, I saw them many times, nice jersey. So, how old are you now? 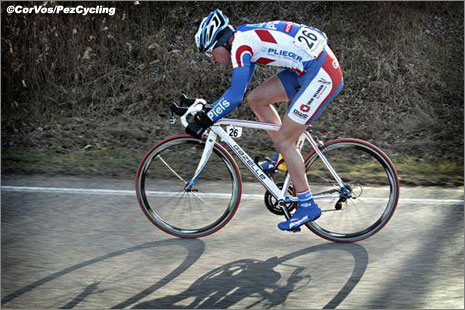 Bert-Jan: It’s different. The racing with amateurs is one speed, and with the pro’s it’s the beginning and the end, much harder! That suits me well, but you have to manage, eh?

PEZ: What about the set-up of the team’s, what differences did you notice?

Bert-Jan: Everything is bigger, you get more attention, you don’t have to think about anything, you get your food immediately, and everything is done correctly, better hotels… 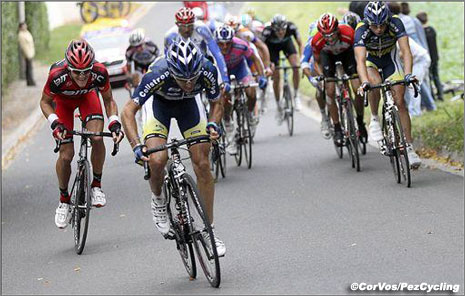 Bert-Jan in the thick of the action at last year’s Paris-Tours (right). The winning move with his teammate, Marco Marcato, and BMC’s Greg Van Avermaet is leaving the station.

PEZ: Which races did you ride with Vacansoleil at the end of 2011?

Bert-Jan: Lots! I began in Denmark, then the Tour of Britain, Paris-Tours, Riesen, Putte-Kapellen, Franco Belge, Tour of Binche, Zottegem, Kцln…lots of races, I don’t remember them too much, there were many races, and I did well in them. You can look them up on the internet. It was crazy – in two months, I drove 16,000 kilometres in my car to races. I then bought a new (second hand) car, four or five months ago, and now it has 20,000 more on it. Now I hope to get a new car. Well, that’s the goal! 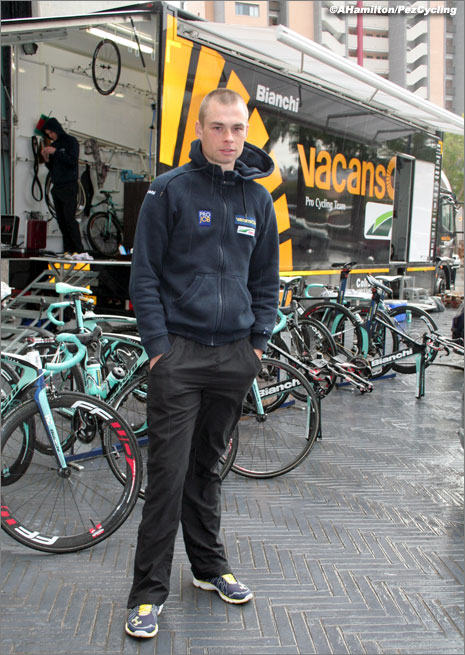 PEZ: If you could ride any races, what would they be?

PEZ: What about stage races?

Bert-Jan: Four or five days are good, I manage, but I have not ridden much longer, so I don’t know. I have ridden Qinghai Lake two years ago. The altitude was not good for me, and that was ten days. I have lost a lot of weight since then; I was 75 kilo’s then, now I’m down to 70!

Bert-Jan: Yes, everything is new, with a new team you want to go well in the group, with the other riders, for me that was really scary, with the bigger riders, like Bjцrn Leukemans, you want to look good. 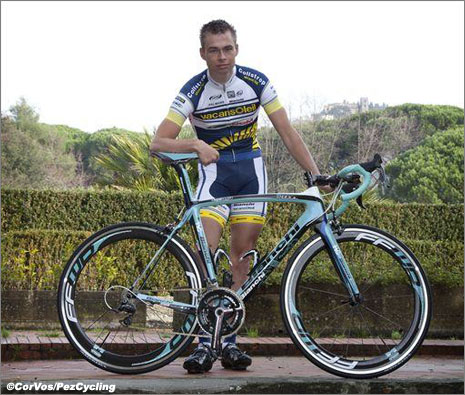 PEZ: Who on the Vacansoleil team did you ride with when you were a stagiaire?

Bert-Jan: With Leukemans, Stijn Devolder and many of the Classics guys. They treated me very well, not like the “new kid” nothing like that. In the beginning they keep their distance, they watch and sum you up, but then they see you are serious, it goes great. I thought it would be harder, but I rode races in my favourite terrain with small hills, like in Paris-Tours I was with (Marco) Marcato in the front group, I rode full gas for him. That sort of thing they see, that’s important, then they know you are a team guy. When you go as a stagiaire they know you can ride, but they want to see what kind of guy you are. If you look at Vacansoleil almost never do the stagiaire’s get in, only two or three times.

PEZ: When did the team tell you that you would be riding with them in 2012? 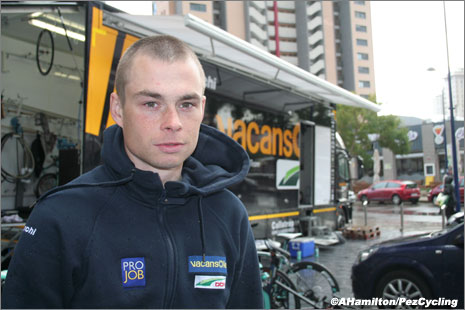 PEZ: Which race would you like to ride well in?

Bert-Jan: Flanders, I think it is the most beautiful race there is. Amstel would suit me too, but I don’t know yet, it’s all new. I’m not sure about the Belgian cobble stones yet! The team will look after me; they won’t have me riding too many races straight away.

PEZ: So what’s the plan now?

Bert-Jan: Well, I’m here till the first (December) and then I train south of here, about 30 kilometres from Alicante, it’s flatter down there. Then I fly to Italy for the first team training camp with Vacansoleil. It’s near Pisa. I’m there till the 20th and then I’m back home for Christmas. Then after the team presentation I come to Calpe again with the team, and I will stay here till the 28th and then I have racing. Last year there were so many team mates here it was crazy, but the weather is so good.

PEZ: What training are you doing at the moment?

Bert-Jan: Just riding. I never do intervals; I just ride and go a little bit faster. In the season you get enough of that when you are racing. Some guys do a lot of intervals and some guys don’t. The team say “if you want a trainer you can have one,” I have my own coach, but I don’t like intervals, they don’t suit me, maybe for someone else, but not for me.

The team gave me a powermeter with my new bike. I don’t know what to do with it, and I’ve not used it yet. I look at it, it’s nice, but all these Watts! It’s still hard, I will see? I have never used one or a heart rate monitor. I guess I’m old school. I just ride, and I feel my body and think I have to do a lot, and I know what I have to do.

PEZ: You will be buying a house here soon then?

Bert-Jan: Maybe not buy, but rent! I live with my parents now, but a second place to live in Spain would be nice. Maybe I’ll move to Belgium, to Limburg. I’m thinking about it, but little steps first.

I need my comfort zone. You race so much that in the summer you don’t need a home so much, but in the winter you need somewhere to come home to. If I went to Limburg, it’s near the Ardennes, I can train on the flat or in the hills, it’s like the roads in Liege-Bastogne-Liege, a little bit like that, for me it could be perfect. In the summer it could be good, but for the first half of the season I would stay at home.

PEZ: What are you most looking forward to in 2012?

Bert-Jan: Racing! I just like to race, all races, to just go for it, I just love the sport. The last two months (riding as a stagiaire) were terrific, especially around Paris-Tours, it was race, two day rest and then race again, it suited me really well, just to wake up and go! Riding like a King is really nice. 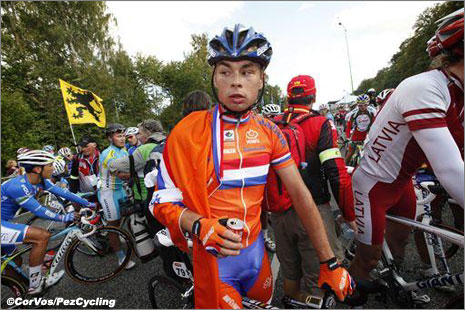 Bert-Jan after the U23 World Championships in Copenhagen.

PEZ: Do you have a cycling hero?

Bert-Jan: When I was 10 or 11 year old it was Marco Pantani, Museeuw also, but Vandenbroucke in Liege-Bastogne-Liege was brilliant. For now it’s really difficult for me, there are many big riders, I look up to them, but….Gilbert won everything in 2011, except Lombardy, but that’s only one race. I think he is going to be World Champion in 2012 – he couldn’t do it on the course in Copenhagen, but Valkenberg is perfect.

I rode the U23 World’s and the course was too easy, two French guys won. The only problem was with the wind, the long straight to the finish was all a headwind and when someone goes from a small country, they just let them. When someone from Holland attacks they were straight on the wheel. I thought it was going to be a hard race, but…next year’s World Championship (2012) is going to be a hard race, really hard! The Cauberg, it’ll be crazy there with many more people than Denmark. In Denmark it was out of the town, at the Cauberg it will be in the town and it will be great.

PEZ: What was your biggest win with the amateurs?

Bert.Jan: Well, the race doesn’t mean much outside of Holland, but Ster van Zwolle in 2010. It’s at the start of the season and for a Dutch team it’s almost the biggest race. I had trained all winter with that race in mind, it was special. This year I was 4th, I had some bad luck, a German guy (Grischa Janorschke) kept me back, I sprinted away with 700 metres to go, but two Rabobank guys sat on me and Barry Markus, (also now with Vacansoleil-DCM) who is so quick, took it. 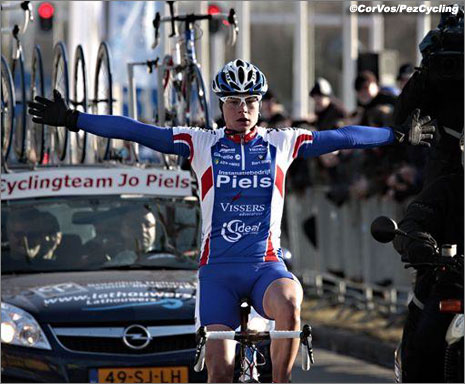 Bert-Jan takes the win at the Ster van Zwolle.

PEZ: So it looks like you are in a good position?

Bert-Jan: Yes I have a two year contract, I’ve got time to be good, it’s a good team and all is good. From what I’ve seen it’s all perfect. I’m happy and I want to cycle and that’s it!

I like PEZ, I always have a look at the Daily Distractions!

So with that a very keen young Bert-Jan pushed his new Bianchi back to the hotel with the life of a Pro cyclist in front of him. Good luck Bert-Jan.

If you want to keep in-touch with Bert-Jan then check-out his web-site: www.bertjanlindeman.nl and the Vacansoleil-DCM Team web-site.