Rider Interview: Is virtual racing the same as the real thing? A win is a win and of it’s a stage of the Tour de France then there is nothing bigger. Rally Cycling’s Canadian, Matteo Dal-Cin, won stage 3 of the Virtual Tour de France, with pre-race favourites Elia Viviani and Nacer Bouhanni nowhere to be seen. Ed Hood caught up with Matteo. 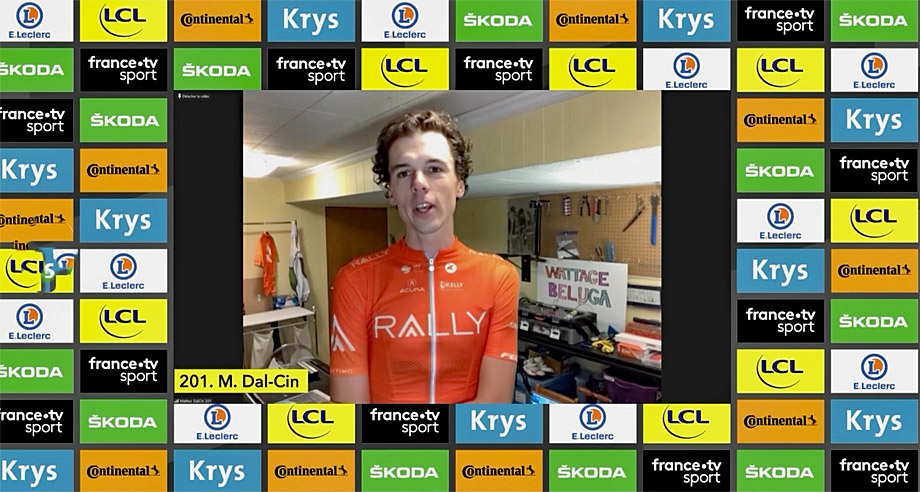 It’s a while since Canada enjoyed a stage win in the Tour de France; we make it Steve Bauer in 1988 but I stand to be corrected. So when US Pro Continental team, Rally Cycling’s 29 year-old Ottawan, Matteo Dal-Cin won a stage in the hotly contested ‘virtual, Big Loop’ we just had to have a word with the man:

PEZ: a medal in the Canadian Junior Team Sprint way back, were you a ‘trackie’ to begin with?
Matteo Dal-Cin: I did a little bit of track racing in London and Bromont, my Dad was big into track racing in his cycling career so I gave it a try. I think we must have had a healthy amount of beginners luck for that though ‘cause we were not a well-oiled machine by any means. 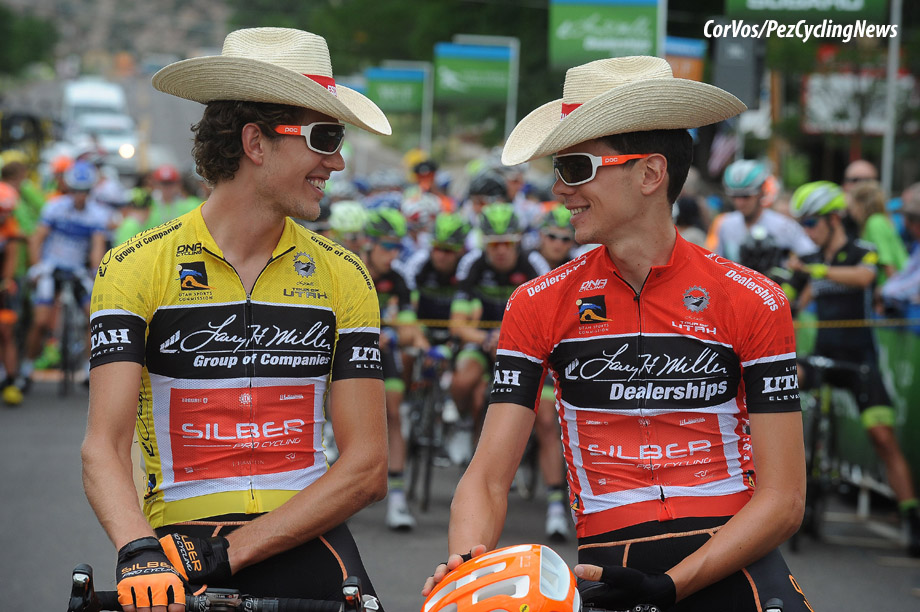 PEZ: How would you describe yourself as a rider now?
I would say I have become an all-rounder. Generally I do better with a flatter/rolling course being a bigger guy. I really enjoy it though, going for the breakaway sometimes you get a shot to see what you can do on the day and if you don’t make it you always have a task to help keep your sprinters or climbers in good shape throughout the day.

PEZ: A kermis win in Westerloo on ’13, did you ever consider becoming a ‘EuroDog’?
That was an awesome trip. I am teammates with Adam De Vos and Nigel Ellsay now but got to meet them on that project for the first time while we were trying to learn the ropes of Kermis racing. I wouldn’t say I imagined myself racing in Europe after that though but it was a nice first taste of the racing scene over there. 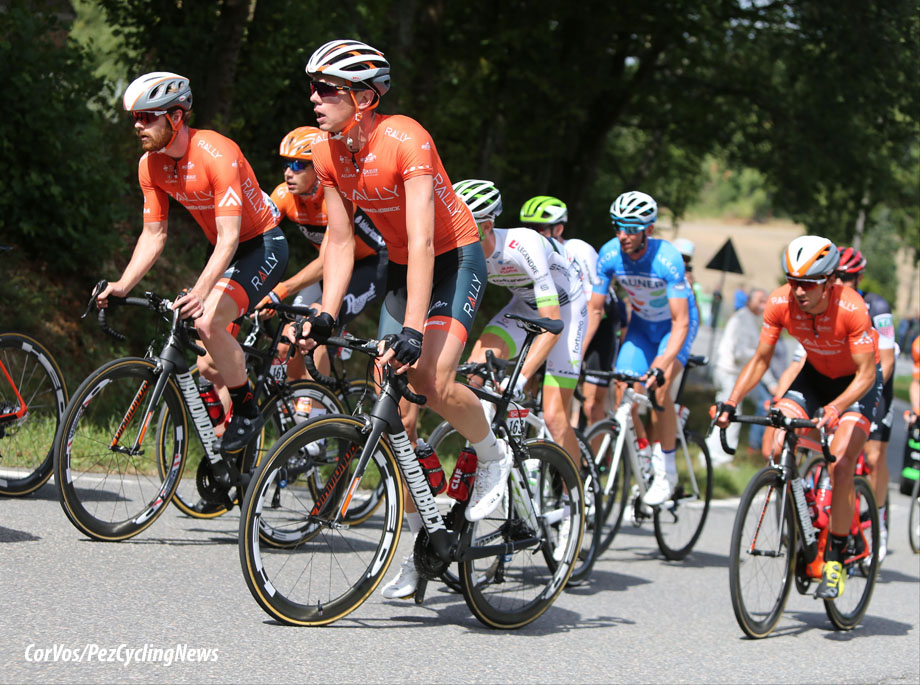 PEZ: How did the ride with Silber come about?
They had a bunch of riders go down in a really nasty crash at Gila and were looking for some people to fill in for the races while those guys were on the mend. I was looking for a guest ride at Beauce that year as my bike shop team wasn’t going to be doing the race. Silber offered me a spot for the rest of the season and even let me race Philly with them before Beauce instead of the guest ride I was inquiring about so that was a very serendipitous moment in my career to say the least. 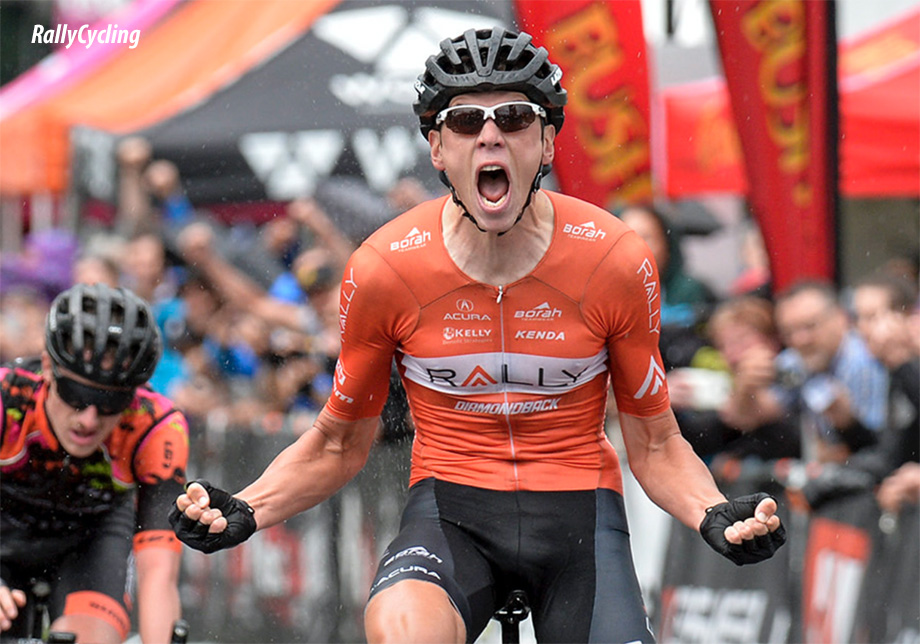 PEZ: The Tour of Morocco in your first year with them – what was that like?
I actually did this race as part of the Cyclery bike shop team out of Ottawa prior to changing teams to Silber later in the year. It was my first proper UCI race and 10 days long so I went south to train for it for the first time to try and get in shape for such an early race knowing the home trainer wouldn’t be enough. I had a few decent days, getting into a breakaway that nearly stuck it to the line on day two and also making the front group on a hectic mountain day on stage eight or nine but between those I was super sick with a nasty bug that pretty much laid me out to the point I was just limping along trying to make the time cut. I couldn’t eat anything so I was running on fumes packing TP in my pocket instead of snacks so there was certainly the full gambit of highs and lows at that race. 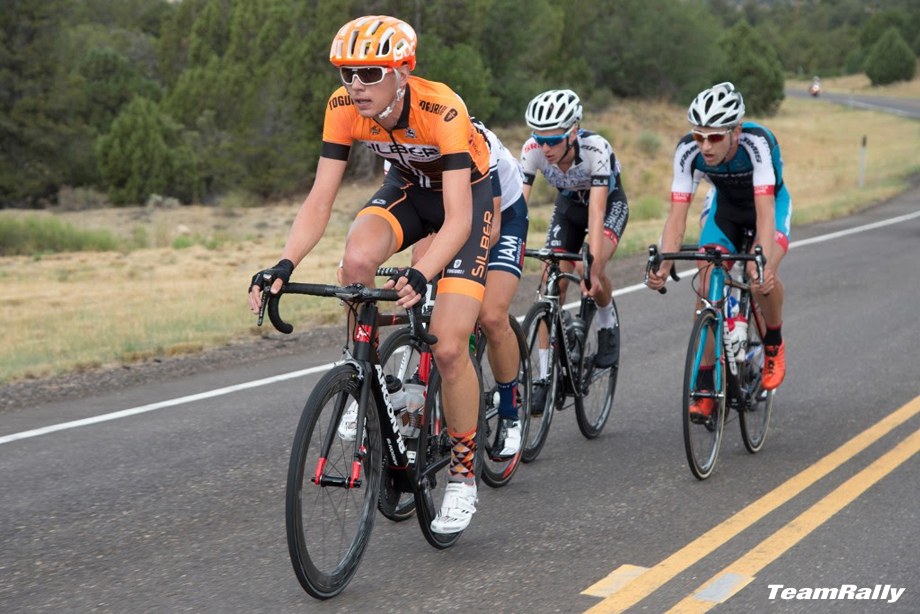 PEZ: You won the Ville Saguenay in ’15, a Coupe des Nations race – a nice result.
Yeah the team really rallied and did an amazing job defending all race long it was our first time defending a GC which was a little stressful at times but we had great leadership in the car and on the road with Ryan Roth who kept us all in check and patient in a foreign situation.

PEZ: Then Redlands in ’16, another good win.
That was a special one; I waited in the wings with consistent but just outside the podium rides until the last day when Nigel and I got up the road with the Hincapie boys and managed to break the Jamis team’s chase behind to be racing for the GC win and the stage. It was super fun racing with a bunch of us in the break being within striking distance of GC win and the weird timing situation of Sunset loop adding additional uncertainty. 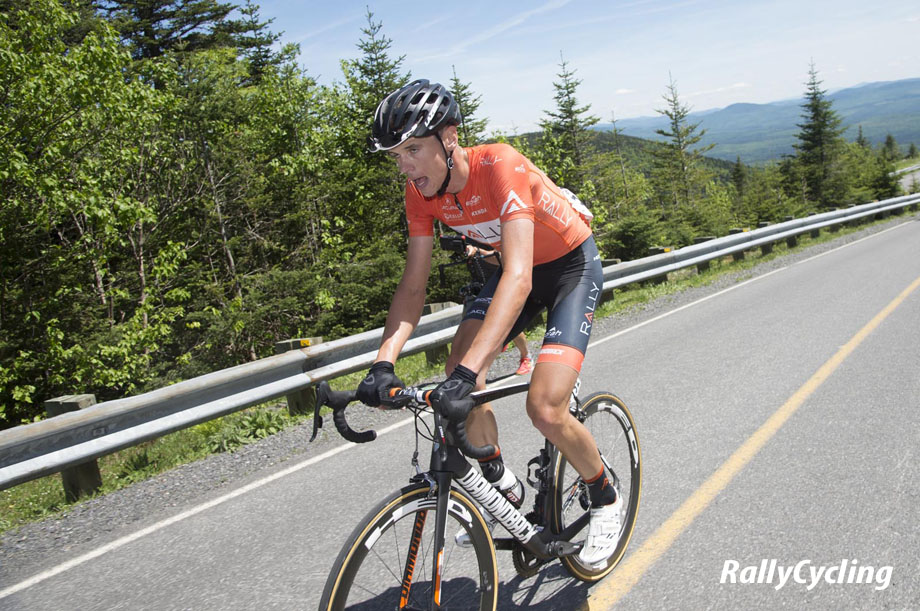 PEZ: Rally in ’17 when Silber folded, how did you get that ride?
I had been trying to get on Rally forever, being the team in North America, so when Jonas reached out midway through 2016 I was thrilled. I think racing consistently but also the Redlands result were probably the catalyst to make the jump up. 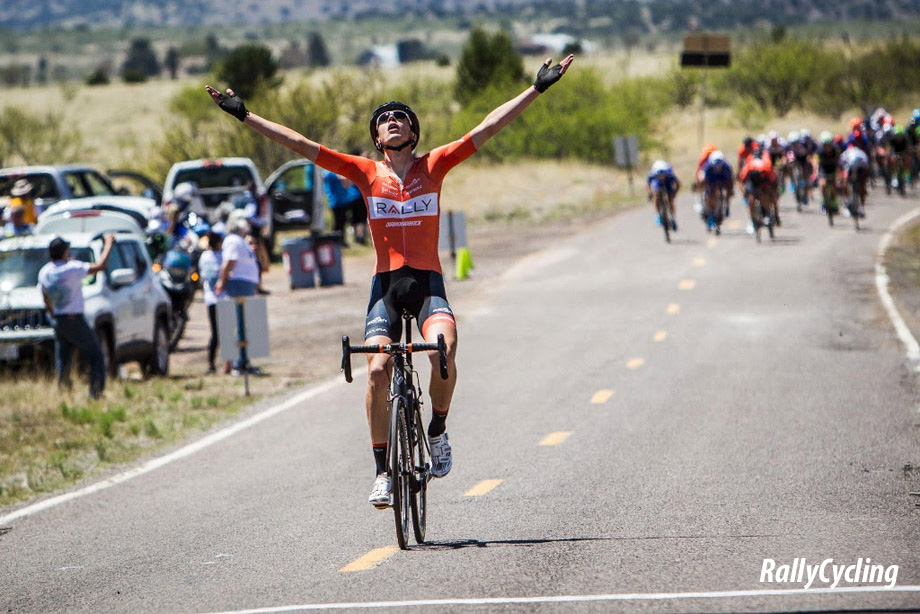 PEZ: National Champion in ’17 – that must have been special with Gila and Beauce stage wins too, a good year.
Yeah I had a big crash the year prior at the Nationals in the last corner and lost a shot from a group of three for the title with the race being at home in Ottawa so it was really an amazing feeling to be able to get the win in ’17 on the same course back at home and wash my hands of the year prior. That swing from Gila to Nationals was great confidence snowballs when you are on good form and catch some breaks to get some wins. 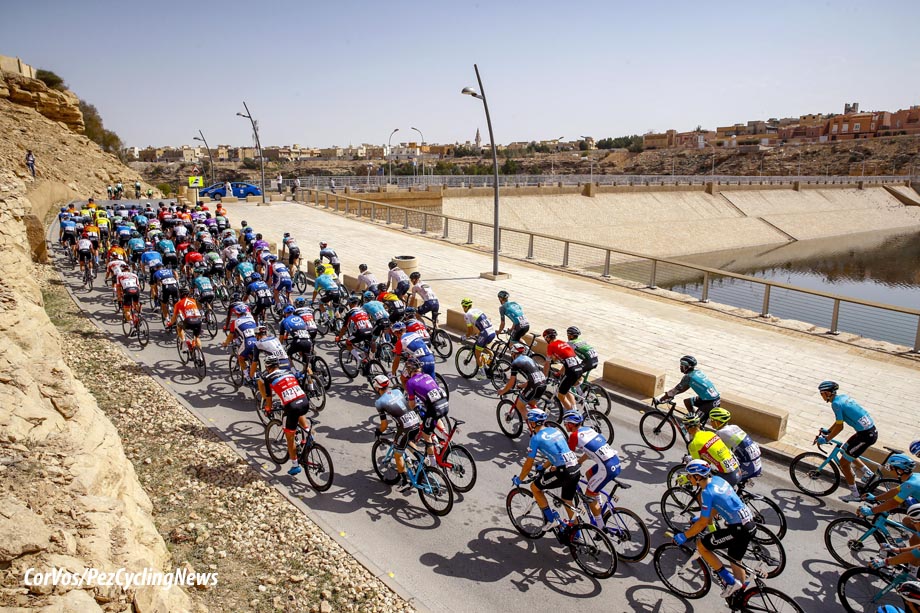 PEZ: You rode the Saudi Tour this year, what was your first experience of desert racing like?
It was my first time but not the team’s. The racing was interesting with lots of cross winds and fast finishes but lots of chill riding between the chaos as it’s still early in the year and everyone is just coming into racing form after the winter training. It was way different than starting the season in Spain or the States as I have in the past where it was more full gas racing all day at that point being a little later in the year.

PEZ: How did you get through lockdown?
I came home to Ottawa and for the first bit and toughed-out the end of winter on the trainer; I just rode outside if we got a nice day here or there. Once spring arrived properly I started riding with a really amazing group of young guys (Theo Kincaid, Max Hayward, Nick Stewart) from here in Ottawa. It was awesome to have them to train with and push one another in training while we couldn’t be racing. 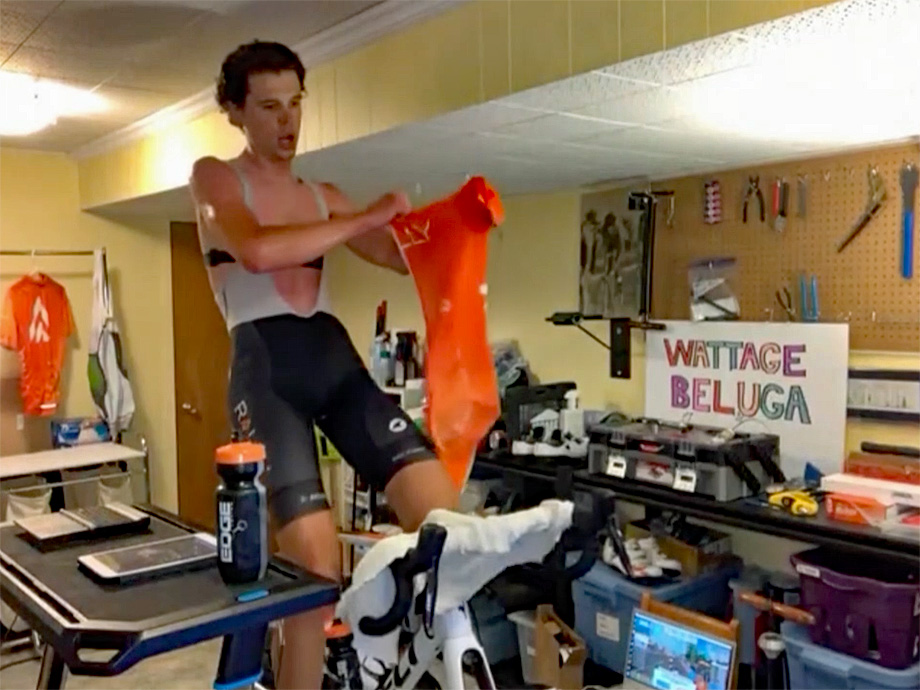 PEZ: You’re a long term ‘Zwifter’ any tips for our readers on how to be a virtual vainquer?
Yeah, been at it for a while now, signed up for the original beta version actually. I think having a reliable internet connection and ATN+ signal is step one but then of course you have to train and it’s a bit different than a road race vibe with full gas starts and never really letting off below threshold. Thank goodness they’re short races so it’s do-able ‘cause if we had to race as long as the outdoor races on the trainer it would be a proper bloodbath.

PEZ: Tell us about your Virtual Tour stage win.
Ha! I finally timed my sprint right with the aero helmet. It’s tricky nailing it all and having it right on a day you have good legs – so very stoked that the stars aligned.

PEZ: How’s the rest of the year looking for Rally?
I mean, uncertain, like everyone else’s. We are planning to return to Europe in August for the end of season racing but with Covid things seem to change so quickly; I think as a team and athletes we have to remain flexible to whatever situations arise. Fingers crossed we get back and can race with no second wave putting the brakes on the season again. 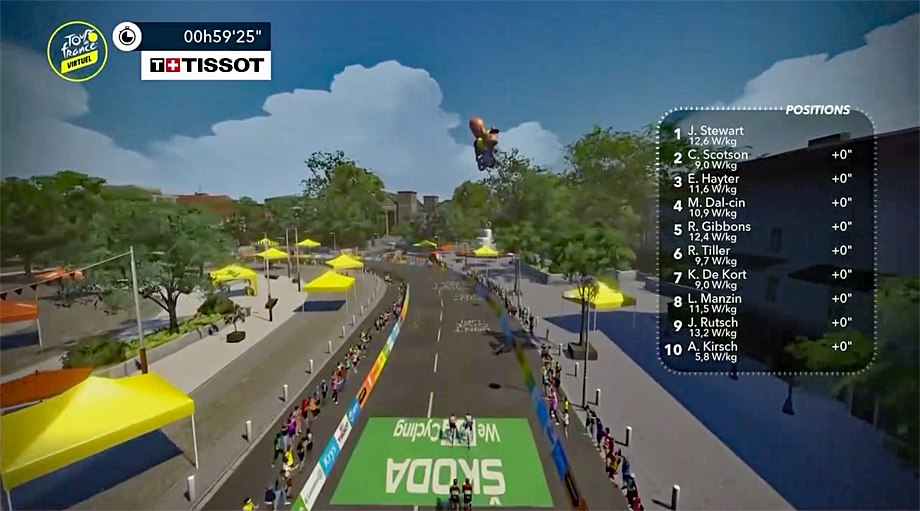