Well, if you didn’t know the name Santiago Perez yesterday, assuming you’ve seen today’s Vuelta results it’s a safe bet you know it today. Santiago Perez finished 2nd today on the climb to Calar Alto and muscled his way into the top ten on G.C. Amazing the great things that happen when you get honoured with a Pez interview! Yesterday during the Vuelta’s rest day I had a chance to chat with Santi on the phone.

Santi is 27 years old and hails from the Asturias region of northern Spain. He turned pro back in 2001 and had been make a steady progression ever since. With experience in the Giro, Tour, and some other shorter stage races, it’s no wonder he’s right there when his Phonak team needs him.

PEZ: We’re now more or less at the half way point of the Vuelta and you’re the highest place rider from Phonak in the G.C. Does that mean you’re now effectively the team leader?

Santiago Perez: No, not really. We’ve had a couple of short comings but not too much has changed. Yes, Tyler lost some time the other day, but we’re hoping it was just a bad day. Also, Oscar [Sevilla] had to change his plans after the Tour and is hoping to regain his top fitness for the final. The nice thing is with my high placing now it gives me more freedom in the team. I can go for stage wins. I’ve been the most consistent in the team to this point and I’m hoping to finish in the top 10 now.

PEZ: According to Phonak’s web page your specialty is climbing. What do you think of tomorrow’s mountain stage? Also, have you seen it before or will tomorrow be the first time?

SP: Yes, the team and I consider me to be a climber. My role is to be up front those days with Tyler and or Oscar to help set tempo for them and whatever else is necessary. No, I haven’t seen the climb yet. However, some of the guys have gone to ride it before. They say it is tough, short and explosive. It will probably make some separations in the G.C. 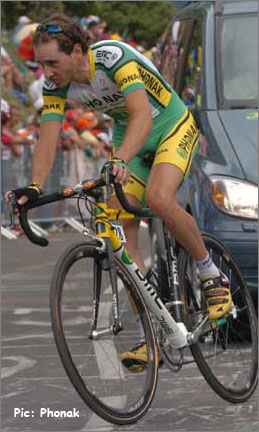 PEZ: You’ve done the Tour and are currently racing the Vuelta. How are your reserves? Are you feeling tired?

SP: Going into the Tour the team made sure we were well rested but had sufficient racing in our legs. Unfortunately we had some trouble in the Tour except for Oscar’s [Pereiro] 10th place finish. However, coming into the Vuelta we were to get as much rest as possible, even if it risked arriving at less than 100%. The team hopes to see improvement as the race goes on.

PEZ: Many people thought that Oscar Sevilla was going to be the team leader for the Vuelta. Later, Tyler Hamilton said in the press that Oscar had been injured after the Tour. What happened?

SP: Yes, Oscar hurt his knee in the Tour. Unfortunately he had to have some minor surgery between the Tour and the Vuelta. This obviously cut into his prep time for the Vuelta and he has had to start the Vuelta much less than 100% but with hopes of improving as the race goes to be on form by the last week or so. This hasn’t really helped us because the other teams have come to the Vuelta this year in top form.

PEZ: In the Phonak team, there are many Spaniards. Even though it is a “foreign” team do you feel at home?

SP: Of course. Even though the team is Swiss, it is really a multinational team. Everyone gets along very well and we started the year with some camps to help make sure this happened. In addition to Spanish riders, we have some mechanics, other team staff and even our director are Spanish. Everything seems to have come together very well.

PEZ: With so many Spaniards and a Spanish director in the team, what is the official language of the team?

SP: Normally the language of the team is French because of the Swiss and many other people on the team speak French. French is sort of the “unofficial” language of cycling. However, we are doing more in Spanish, especially in the Vuelta since so many of the riders are Spanish. We do a little in English too because of Tyler. He seems to understand a bit of Spanish, but he still has a tough time speaking it though. 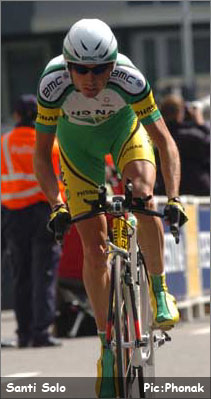 PEZ: In the U.S. (and the English speaking cycling community in general) Tyler Hamilton is a hero to many cycling fans. You work with him on a daily basis, what’s your opinion?

SP: The image of Tyler as a racer is the way he is off the bike too. He has the admiration of many people. A lot of guys in the peloton have a lot of respect for him too because he’s always fighting. We know how hard it is to ride a Tour healthy for example and he did it last year with a broken collarbone. He’s a great guy who has his head on straight.

PEZ: In the news, it seems that Phonak is building a “super team” for next year. What do you think of the signings of Landis, Peсa, Botero, and Perdiguero?

SP: When I joined this team it was a project for the future. There were a lot of young guys on the team to make a good base. However, the team was also interested in getting good results quickly in order to be invited to the Tour. That had a lot to do with signing Tyler and Oscar [Sevilla] last year. The team keeps adding quality riders. Yeah, these guys [new signings] are veterans, but they are strong and know the Tour well. Everything is going well toward improving the Tour team.

PEZ: OK, one last question and I’ll let you get back to relaxing on your rest day. With the 2004 season quickly coming to a close, have you had a chance to think about what you want to achieve in 2005?

SP: Honestly not too much. I’m still thinking of what’s going at the present. I’m happy to have been able to race a grand tour this year. In fact when it’s all over I’ll have done two. I’m also really happy to have the freedom now in the Vuelta to go for a stage win as it gives me the chance to do something big. Next year with the ProTour, we’ll have to race the Giro, Tour, and Vuelta. I’d like to be given the opportunity to ride one of these races as the leader.

With that we wrapped up the interview. It was about time for the Phonak boys to head to dinner. Whatever Santi did or ate yesterday seems to really have paid off today. So now Santi is achieving his goal of being in the top ten on G.C. I’m hoping he can hold on to it or even improve on it. Of all the interviews I’ve done this year talking to Santi was the most pleasant and easy conversation. Hopefully we’ll have a chance to check in with him again before the Vuelta is over. Great job today Santi and good luck with the rest of the Vuelta! ЎVenga, Venga, Venga, Animo!