‘Johnnie Walker,’ unless you were a Footon-Servetto fan, up until stage two of this year’s Vuelta, you probably thought it was the name of a whisky? But last Sunday the 23 year-old from Sale, Gippsland, Australia was in the limelight of world cycling as ‘moto 1’ which covers the break, focussed on his Footon- Servetto jersey for much of the stage. We interrupted Johnnie’s rest day peace to ask him a few questions.

PEZ: You were with the Australian Institute of Sport Team then Marco Polo, before Footon, Johnnie?
Johnnie: I spoke to Marco Polo but never actually signed with them; however, I think that they must have put my name forward to the UCI because I come up on the palmares websites as having ridden for them, last year.

The actual progression is that I raced as a junior in Australia then had a season in Belgium followed by two years with AIS but last year I was with Trasmiera-Footon which was the U23 feeder team for the Pro Tour team.

My brother William rode for Fuji last year and he was the connection to the Trasmiera for me.

Unfortunately he had to leave the sport due to cardiac problems.

PEZ: The Footon kit; it gets a bad rep.
Yes, but it stands out and it also gets a lot of press – that’s what it’s all about. 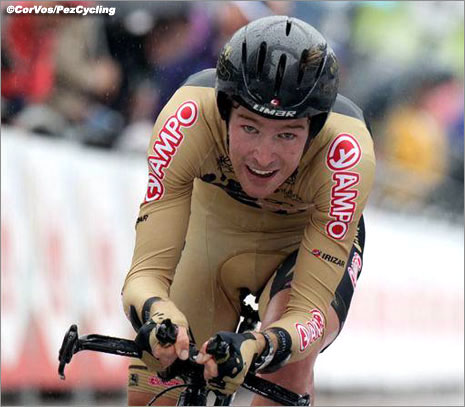 PEZ: Did you get time to prepare adequately for the Vuelta?
A month and a bit, I was down as a ‘possible,’ there were two places with four of us in line for them.

I had really good form in the Tour of Burgos but the team decided to go for more experienced riders in the Vuelta.

I rode the Eneco Tour; but then Raphael Valls got sick and they asked if I wanted his place.

It had a few days to recover from the Eneco and here I am.

PEZ: What are the team goals for the race?
Get in breaks, set sprints up for our Portuguese sprinter, Manuel Cardoso and gain publicity.

PEZ: And your goals?
It would be nice to get in another break; especially if it has a realistic chance of going all the way to the finish – and to conserve energy whenever I can.

PEZ: That stage one TTT looked fantastic.
It was a pretty cool experience; the first time I’ve raced at 10:00 pm.

We had a couple of guys who came into the race a little under done and want to ride into form so we couldn’t go as hard as we might have liked, but in terms of atmosphere, and as an experience, it was amazing.

PEZ: Tell us about that break on stage two.
We were away all day, I think the break formed at 10 K out – guys are saying that it’s much more relaxed here than in the Tour or Giro, the break is allowed to go more easily – and it was a long, hot day.

My plan was to try for a jersey, mountains or combine but unfortunately I was pipped for the points by the other guys in the break.

Our chances were slim, so you ride in a controlled fashion and don’t push too hard; but if you can get to 50 K to go with more than four-and-a-half minutes then there’s a chance you can survive.

The trouble is that the likes of HTC are so good and know exactly what to do, that it’s difficult to succeed.

PEZ: The heat has been pretty brutal.
It has certainly played a big part in the suffering; I think that the sprinters especially are really feeling it.

The starts are hard until the break gets established, then it calms down for a couple of hours and is more settled.

In the last couple of hours you get into the gruppo and I’ve been managing to eat quite well, despite the heat, but you’re thirsty all the time and someone is back at the car for bidons every 10 kilometres – the temperature must have averaged 35 degrees.

PEZ: What’s been your worst day?
The day after I was in the break, stage three – I was sick the night after stage two; I think I was dehydrated and wasn’t far away from having to pull out.

But eventually I got together with some other guys and made it to the finish – and there have been a couple of easy days since then.

PEZ: How has the rest day been?
I rode for one-and-a-half hours then it’s really been relaxing, eating, sleeping . .

PEZ: It seems like a few riders are going through the motions in Spain.
There are various reasons for riders being here, obviously you have guys going for the GC and then there are the riders who are preparing for the Worlds, but yes, there are varying levels of motivation in the peloton, here.

PEZ: And the winner will be?
I think it will be Nibali, there are a few people going well but I think that terrain the race is moving into particularly suits him.

PEZ: Tomorrow, stage ten, what’s the plan?
It goes up quite a bit and I can’t see it being a sprinter’s stage, it could be a breakaway stage – and now that I come to think of it . . .

***
Tuesday did see a breakaway stage, ably won by Caisse’s Irmanol Erviti, and there was a Footon Servetto rider in the break, but it wasn’t Johnnie; Italian Giampaolo Cheula finished eighth for the men in the distinctive strip.

And Johnnie will be talking to PEZ again, on the second rest day.

Vuelta’10 St.10: Erviti Scores Out Of The Break