Pez has pleasure in hooking-up again with Italian professional, Dario Cioni of the Liquigas team to give us his inside story on the Vuelta. We’ll be in touch with him throughout the race to hear his thoughts; we first spoke to him shortly after the prologue team time trial.

Pez: It’s good to be talking to you again Dario, what have you been up-to since the Tour de Suisse when we last spoke?
Dario: I have done two altitude training camps at Stelvio, ridden the Brixa Tour and Tour of Germany plus some Italian semi-classics.

Pez; How is the form, I remember you were tired at Suisse.
Dario; I feel refreshed, my condition is good I think and I have good sensations. 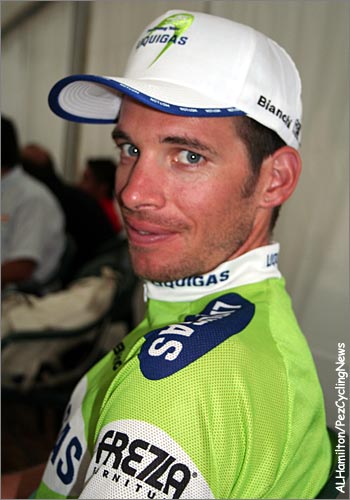 Pez; What was the prologue course like?
Dario; it was a short course, only seven kilometres or so with a couple of turns early in the race then six kilometres of straight, a roundabout then one other turn – very fast.
There was a little headwind for the second part of the course but I think we averaged 56 kph (ouch!)

Pez; Who was strongest for Liquigas today?
Dario; Magnus (Pez diarist, Magnus Backstedt of Sweden) did a good job today, he’s been doing track work and has a lot of speed, he was the only one today who was lifting the speed of the team during his spell.
We did OK, (Liquigas were ninth at 13 sec. behind runaway winners CSC) top five would have been better but we’re not really a specialist time trial squad.

Pez; How did you feel during the ride?
Dario; It’s a little short for me, if the distance had been twice as long then it would have been good for me.

Pez; What was the highest speed your computer showed today?
Dario; The maximum I think was 64 kph, but most of the time it was 59/60 kph.

Pez; Your intermediate time was right-up with the leaders.
Dario; We have guys with explosive speed in the team, so we went out very quickly but like I said we are not a team of specialists so in the second half we were not so good compared to the specialist time trial squads.

Pez; Was the CSC win a surprise?
Dario; No, they are specialists and prepare for team time trials; to win this type of race is very important to them, an issue of pride.

Pez; What are Liquigas’ goals for the Vuelta?
Dario; Luca Paolini is going very well and is building-up for the worlds, he is a strong sprinter, we will decide on the road each day who is best for the finish, Luca or Magnus.
Magnus had a poor start to the season, compromised with injury but he is very strong and motivated just now.
Danilo (team-leader Di Luca) and I are thinking of the GC but we will see after the first mountains.
I am looking forward to the first uphill finishes and maybe a stage win.

Pez will be talking to Dario throughout this year’s Vuelta.