Rider Interview: World No. 1 woman and only 21 years-old, Lorena Wiebes is following in the foot-steps of a line of top Dutch women cyclists. Fifteen wins in 2019 and one in the shortened 2020 season – The World is at her feet. Ed Hood had a word with the next big star. 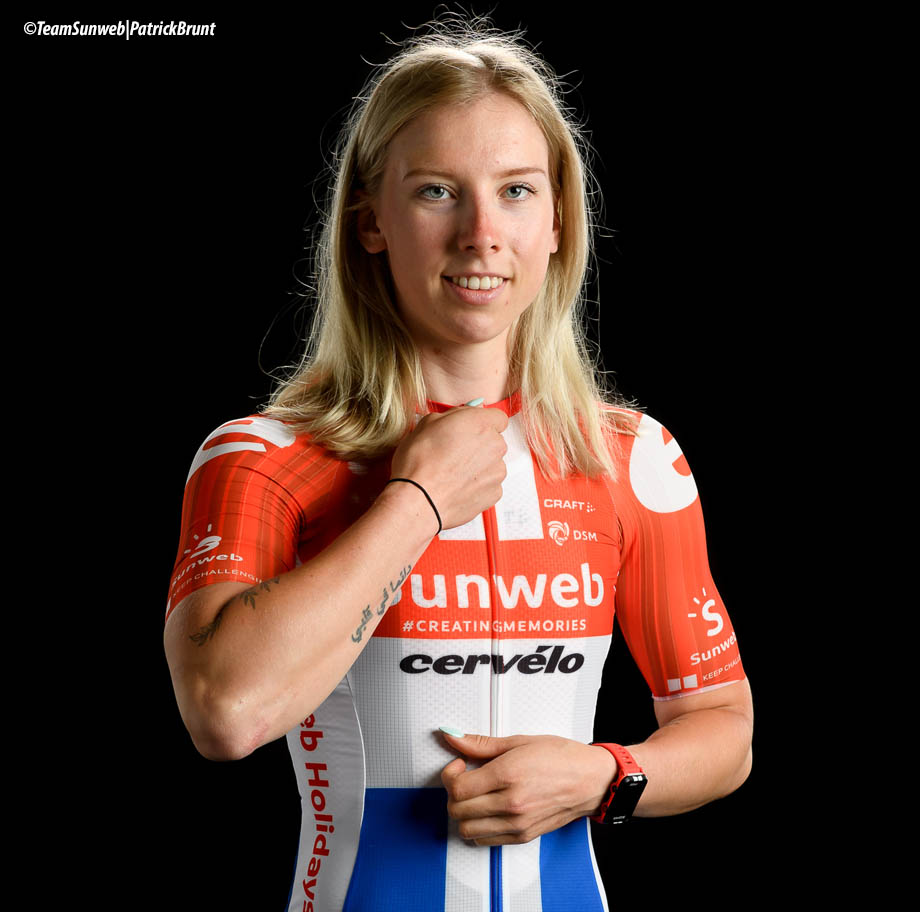 In the half century I’ve been involved in the sport, I’ve witnessed three of the all-time greatest ladies of cycling perform. First there was Keetie van Oosten-Hage; two gold, three silver and three bronze world road race championship medals plus four gold, three silver and three bronze world pursuit medals between 1966 and 1979. There were no Olympics for the women in Keetie’s day but there were for the dazzling Leontien Van Moorsel who won Olympic road race gold, two time trial golds and an individual pursuit gold between 2000 and 2004. Add that to four Worlds individual pursuit titles, two road race titles and two time trial titles between 2000 and 2004 and you have palmarès of the highest order. 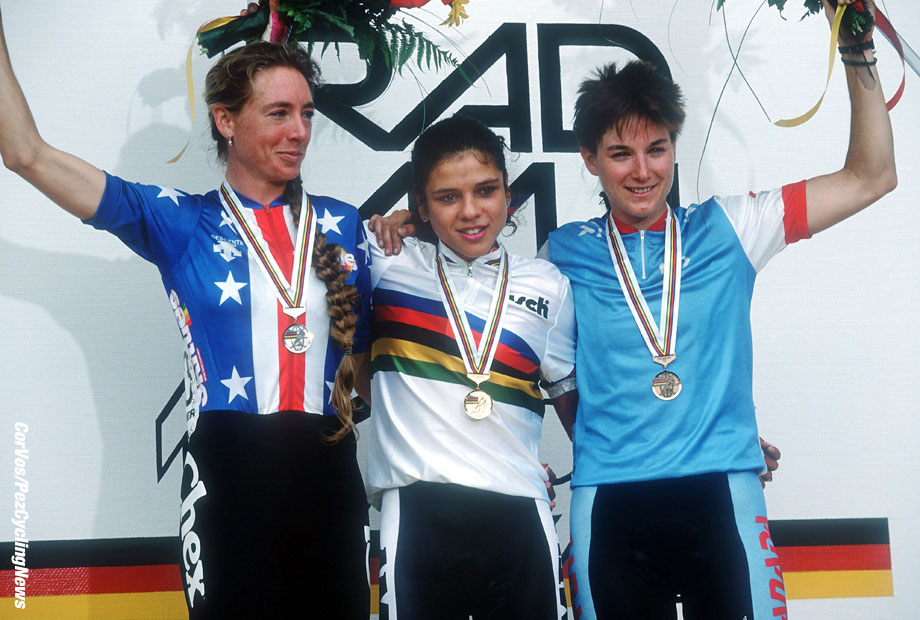 Then there’s Marianne Vos with Olympic road race and points titles, three world road race championships, a world points championship and a world scratch championship not forgetting SEVEN world ‘cross titles between 2006 and the present day – you’re talking about another queen of the peloton. 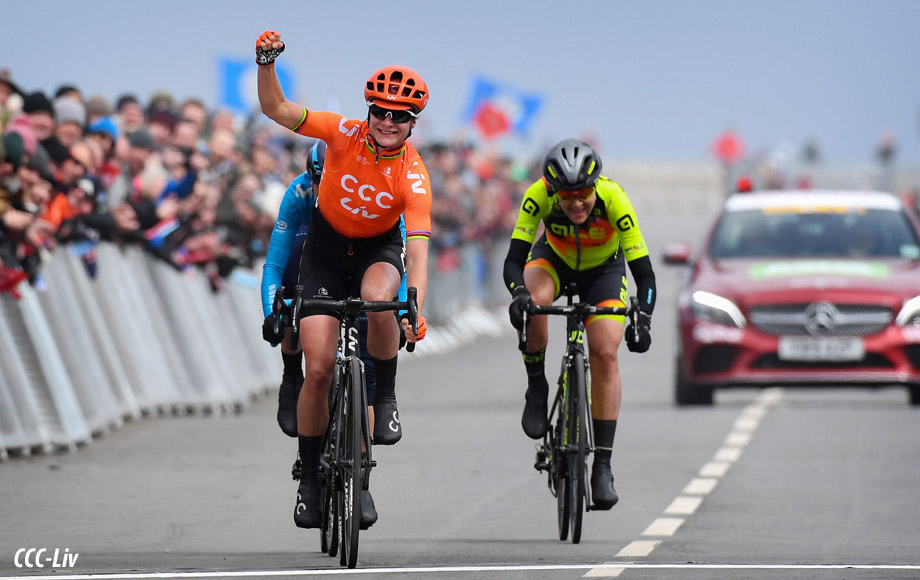 There’s a common denominator between those three names – they’re all Dutch. And number four may just have announced herself last season with 15 UCi wins; placing her firmly at the head of the ladies’ UCi World Rankings. She was already winning in 2020 with victory in the Omloop van Het Hageland before the Corona virus changed everything. Lorena Wiebes is just 21 years-old but is already shaping up to be the next Dynamic Dutchwoman, we caught up with her recently, soon after she joined Dutch, German registered, [where else?] ladies team, Sunweb at the start of June.

PEZ: How did you get into cycling, Lorena?
Lorena Wiebes: My dad was a cyclist, he used to race when he was young but at first I wasn’t interested in the sport, not until I was around 12 years-old. 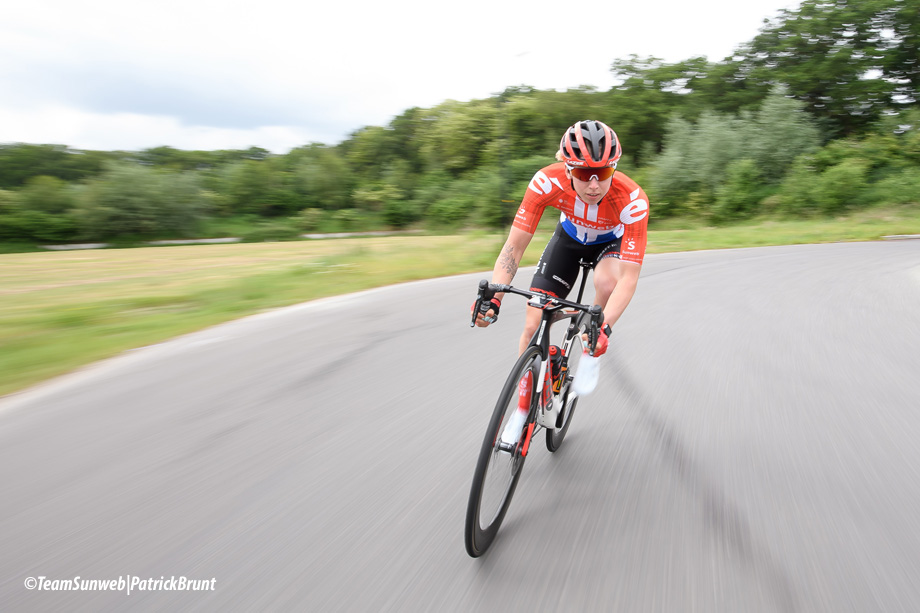 PEZ: Who were your role models as a youngster?
In the men’s peloton it was Peter Sagan and among the ladies it was my countrywoman, Marianne Vos. When I beat her to win the national championship last year it was crazy!

PEZ: You had 15 UCi wins in 2019, do any stand out as ‘favourites’?
Winning two stages in the Boels Ladies Tour was a really great feeling and of course to win the national championship ahead of Marianne was special. 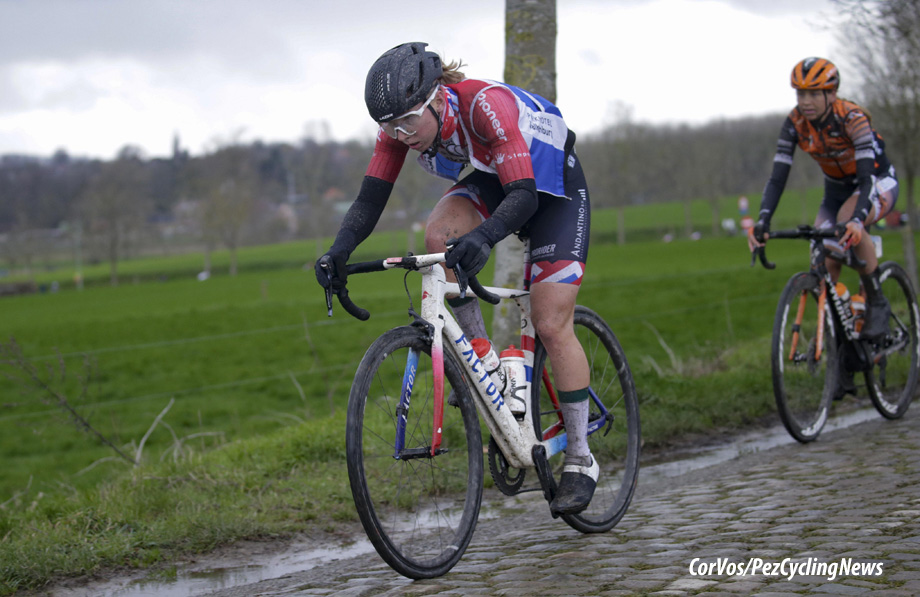 PEZ: You’re ranked number one in the world now, has that changed anything for you?
Not really, it’s just a little bit crazy though, at the start of the year I never thought I’d finish it ranked number one – but it was a great note to finish my season on.

PEZ: Why leave the Park Hotel team who you were with until the end of May?
I wanted to be more professional, Park Hotel was a good team but I always viewed it as more of a development team. I’m at a stage now where I want to step up to the highest level of the sport. 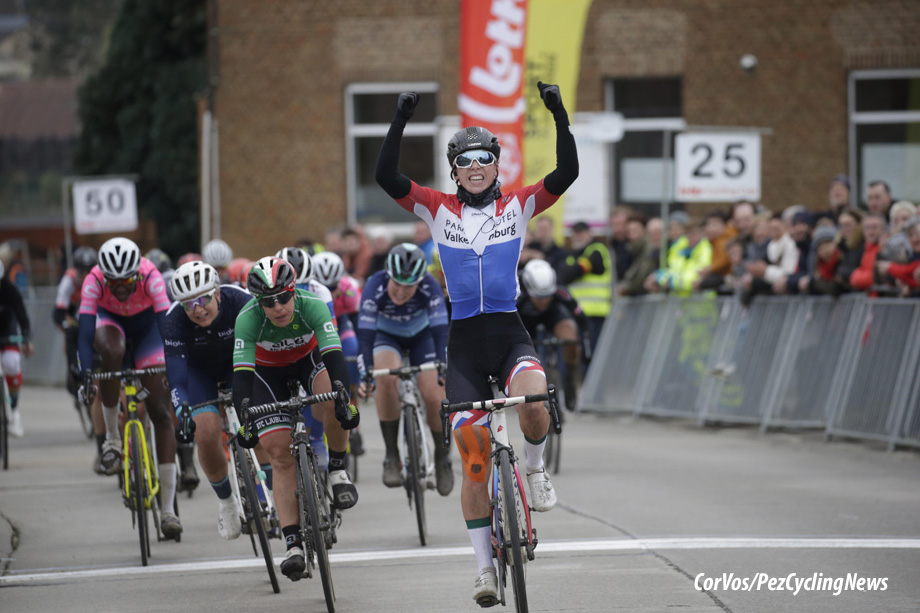 PEZ: There was a bit of legal ‘stuff’ going on around the move, did that distract you?
The winter was a bit of a difficult time for me with all that was going on over me wishing to leave the team and move on but we sorted it out and I left the team on good terms at the end of May. I’m looking forward now to a new chapter in my career.

PEZ: Sunweb have signed you through to the end of 2024; that must give you peace of mind?
They really believe in me and are behind me for the Tokyo and 2024 Olympics. It’s a young but strong team with us all looking to grow together. 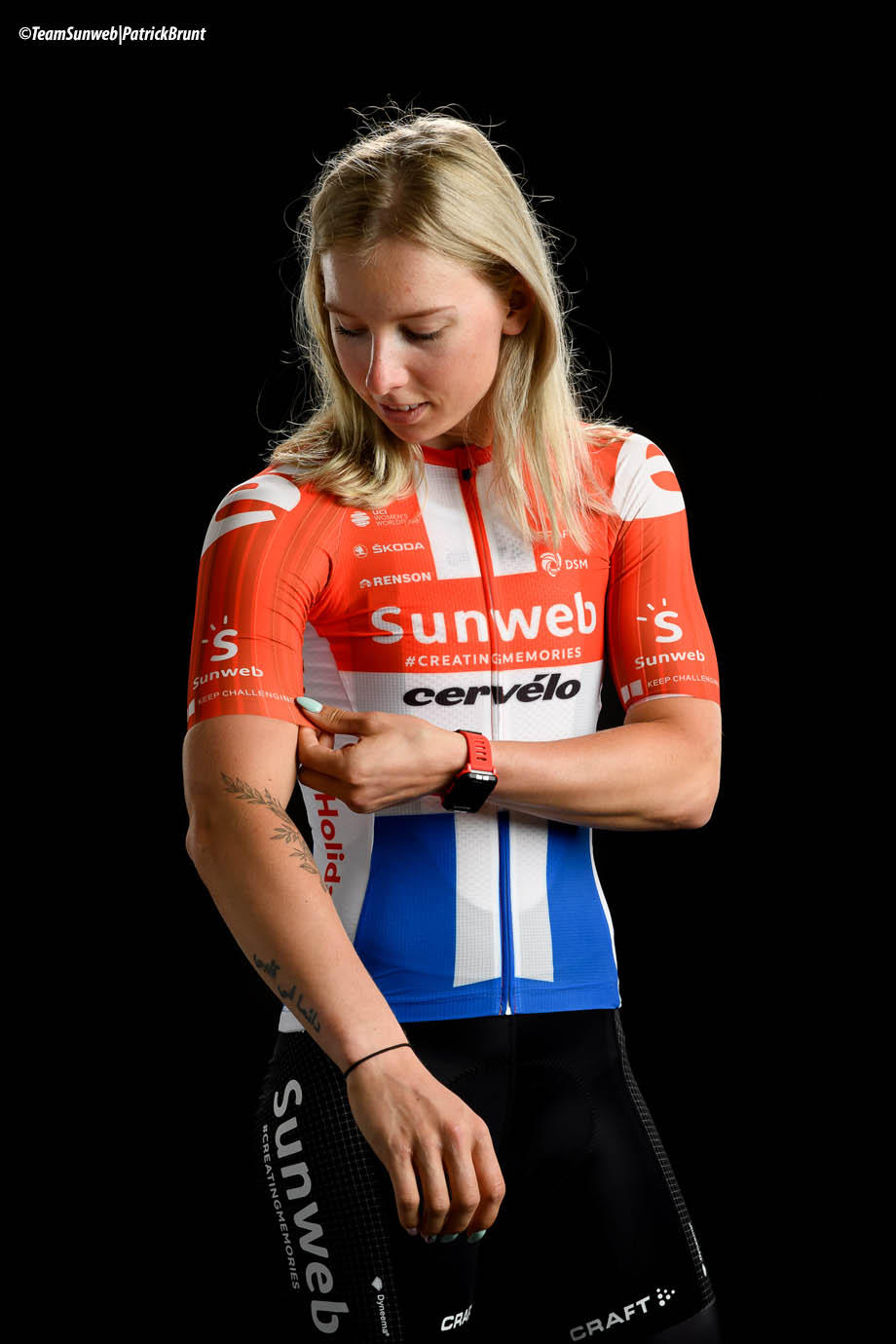 PEZ: The UCi are saying racing will start again in early August, do you have any indication about your programme?
We don’t know for sure yet, it’s disappointing that races like the London Grand Prix have been lost but I’m looking forward to riding races like Gent-Wevelgem and De Panne later in the year.

PEZ: Your big strength is your sprint; do you have lead out girls or do you find your own way?
Last year mostly I found my own way but this year it’s something we’ll be looking at to see if we can develop a ‘train’ for me in the sprints. 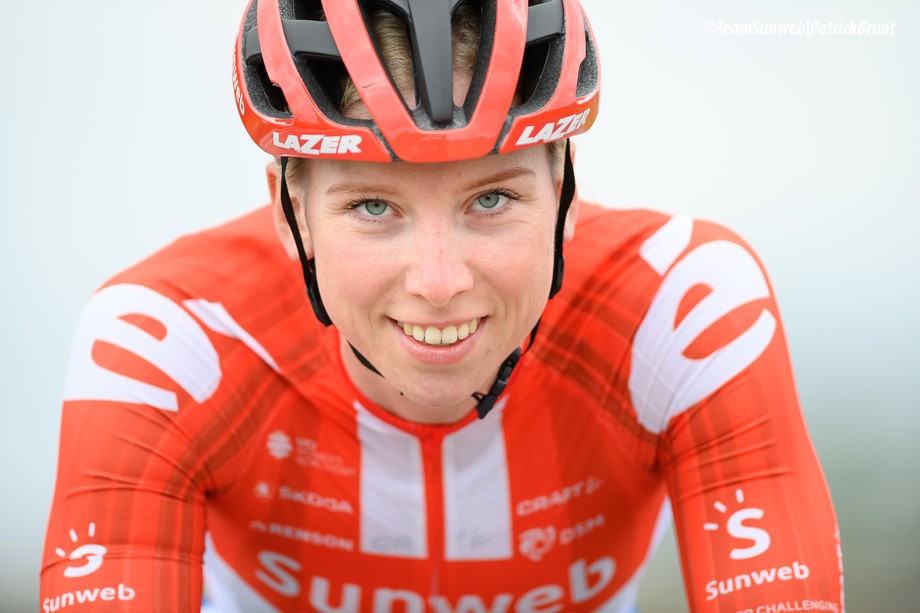 PEZ: You had a nice result in the Tour of Chongming Island, what was racing in China like?
It was really nice to win all three stage and the GC but this year I think the race will clash with the new ladies’ Paris-Roubaix race, which I really want to ride. The racing there was different from Europe on a completely flat parcours but it was a good experience and really well organised.

PEZ: You have cyclo-cross wins on your palmarès, when do you take a break.
I take two weeks completely off the bike at the end of the road season. I ride the ‘crosses just for fun, I can’t have a whole winter without racing! 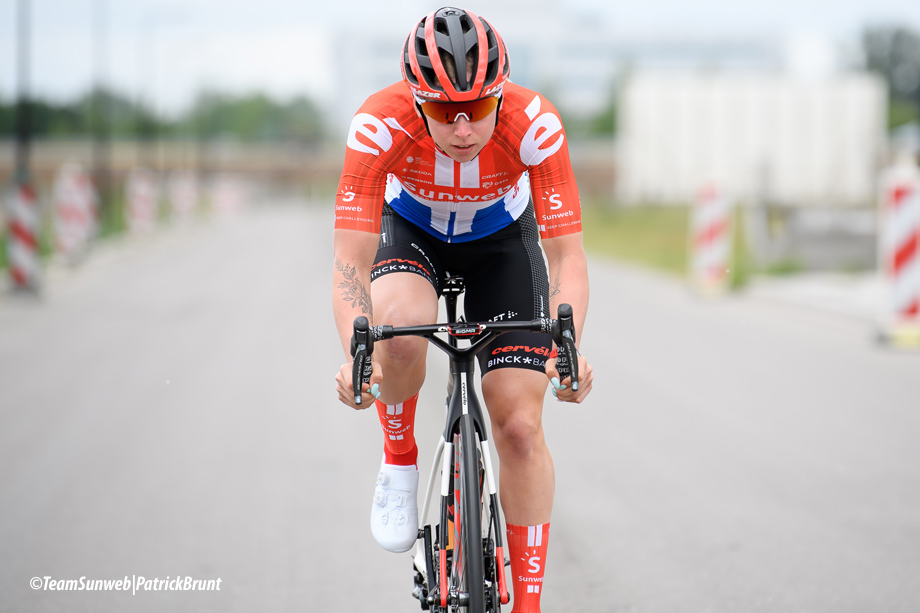 PEZ: A bronze medal in the Dutch keirin championships?
Yes, I know track sprinting is very different from the road but I just wanted to try it. I’m more suited to endurance races on the track, I won the scratch race at the national championships.

PEZ: Do you have a coach?
Yes, all of my coaching comes through my Sunweb team now, both on the bike and core fitness. 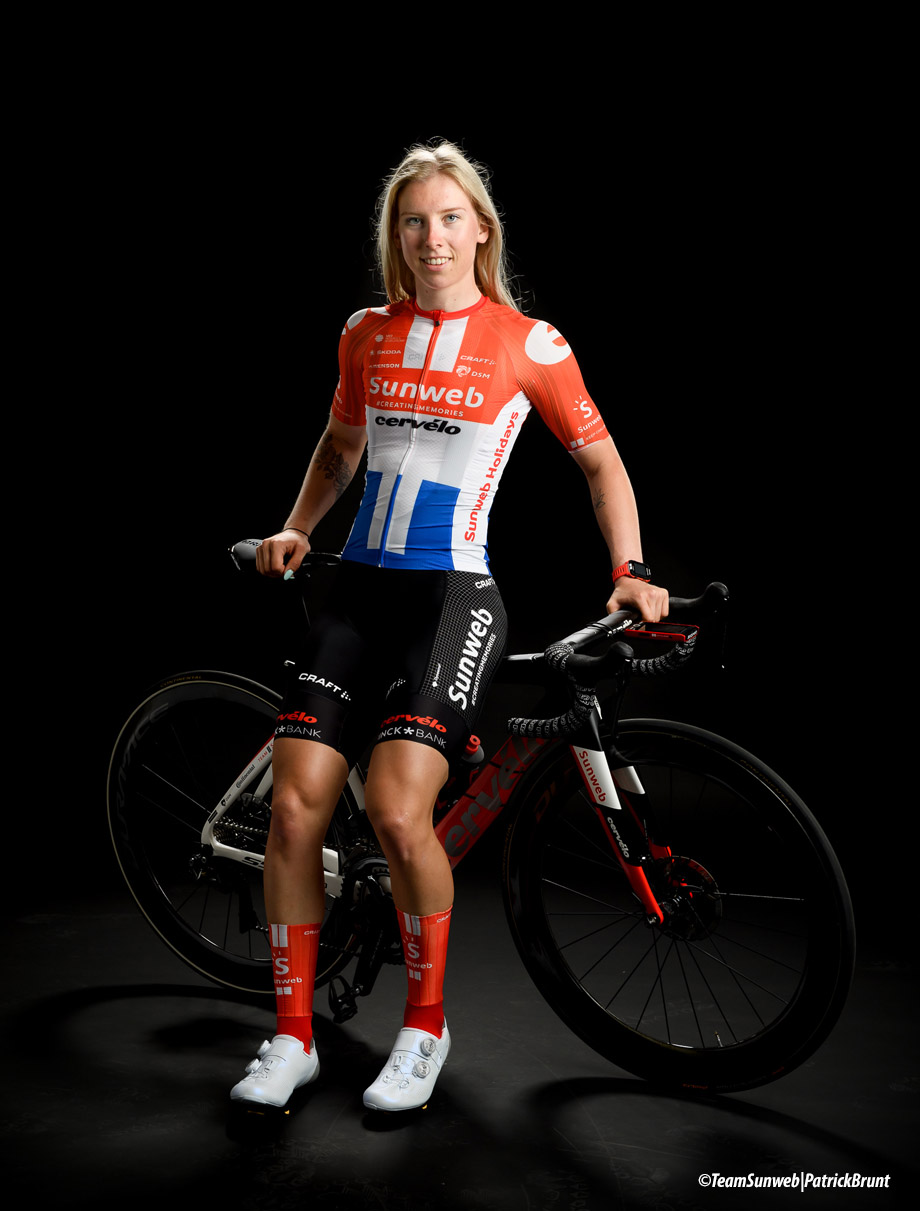 PEZ: What have you been doing training-wise during the ‘lock down’?
Mostly long, endurance rides, on the mountain bike if it’s cold because it’s easier to keep warm but if the weather is good then on my road and time trial bikes.

PEZ: There’s much talk of ‘equality’ with men’s cycling for the ladies, what would you like to see happen?
There’s always going to be a difference but it’s good to see races like Paris Roubaix happening for us. The main thing is that everyone who rides a bike for a team full time should be paid a wage. 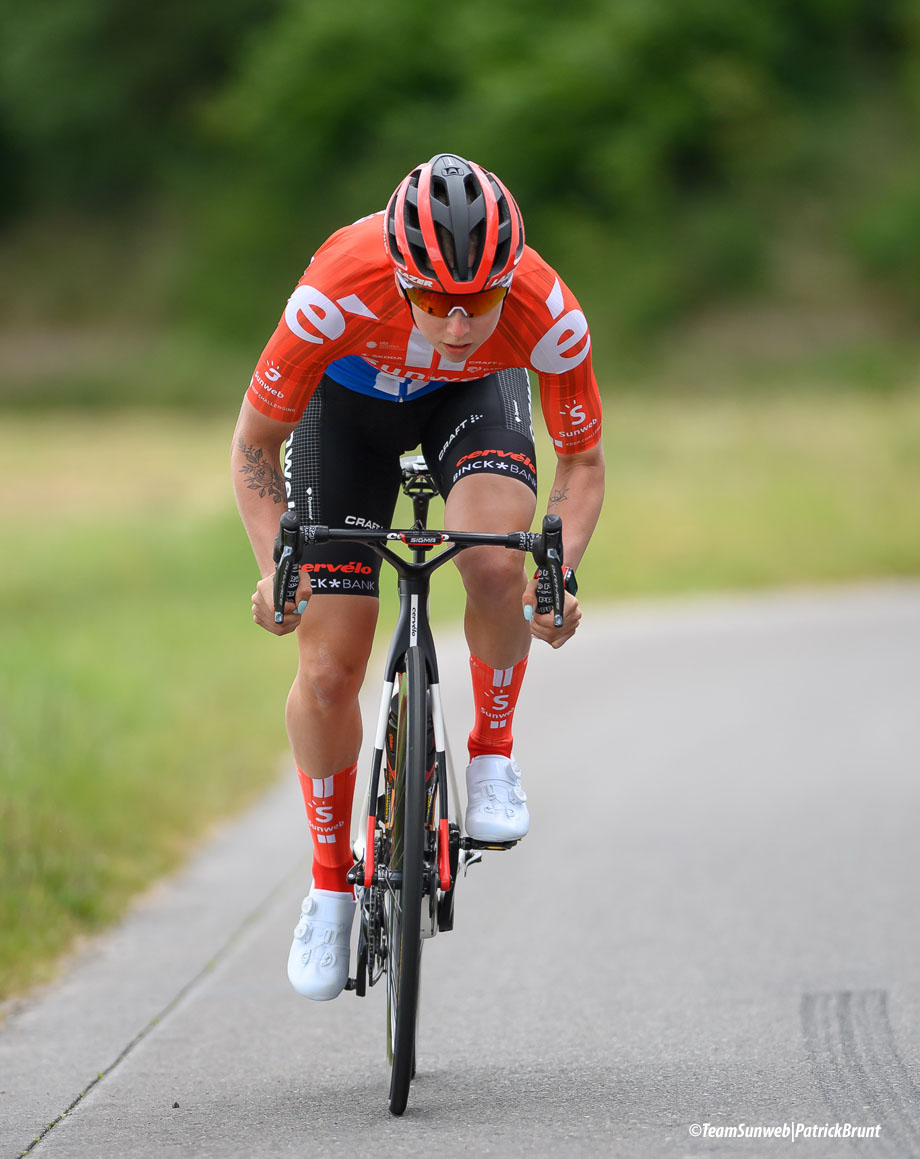 PEZ: What does Lorena do when she’s not riding her bike?
If I have a rest day then I might just chill and watch Netflix or maybe take the dogs for a walk – we have a boat so it’s nice to get out on that too.

PEZ: And if you could win just one more race?
I think that would have to be the world road race championship. 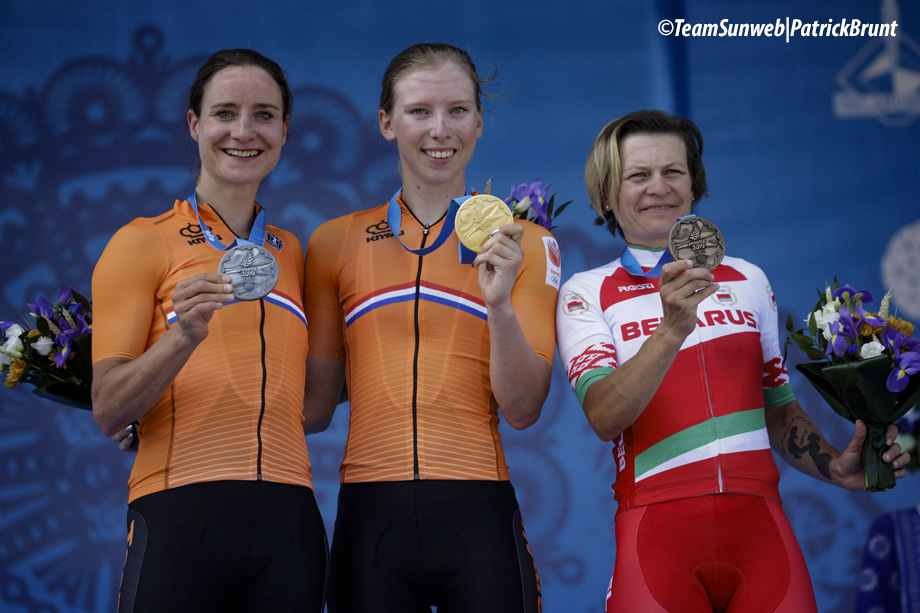 # Thanks to Lorena and to Emily Brammeier at Sunweb for this facilitating interview. #