Rider Interview: Two weeks ago Yoeri Havik won the World Points championships on the Saint Quentin en Yvelines track. Ed Hood has worked with Yoeri at the ‘6 Days’ and is a friend of the big Dutchman, so he had to call him up for congratulations and a Worlds chat. 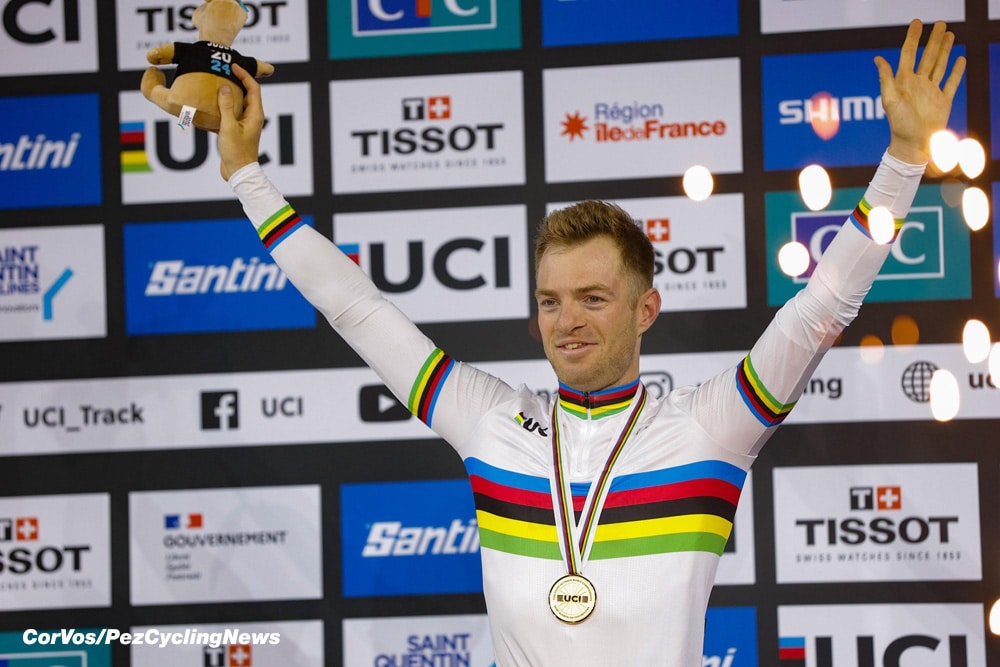 The Six Days, I miss them. Some of the riders I don’t miss; but I do I miss Dutchman, Yoeri Havik; as the Italians say, he was always, ‘simpatico,’ approachable, friendly, open. So I was delighted to see the 31 years-old from Zaandam pull on that beautiful maillot arc en ciel as winner of the points race in what was remarkably his first Worlds individual event albeit he’s twice ridden the madison Worlds. 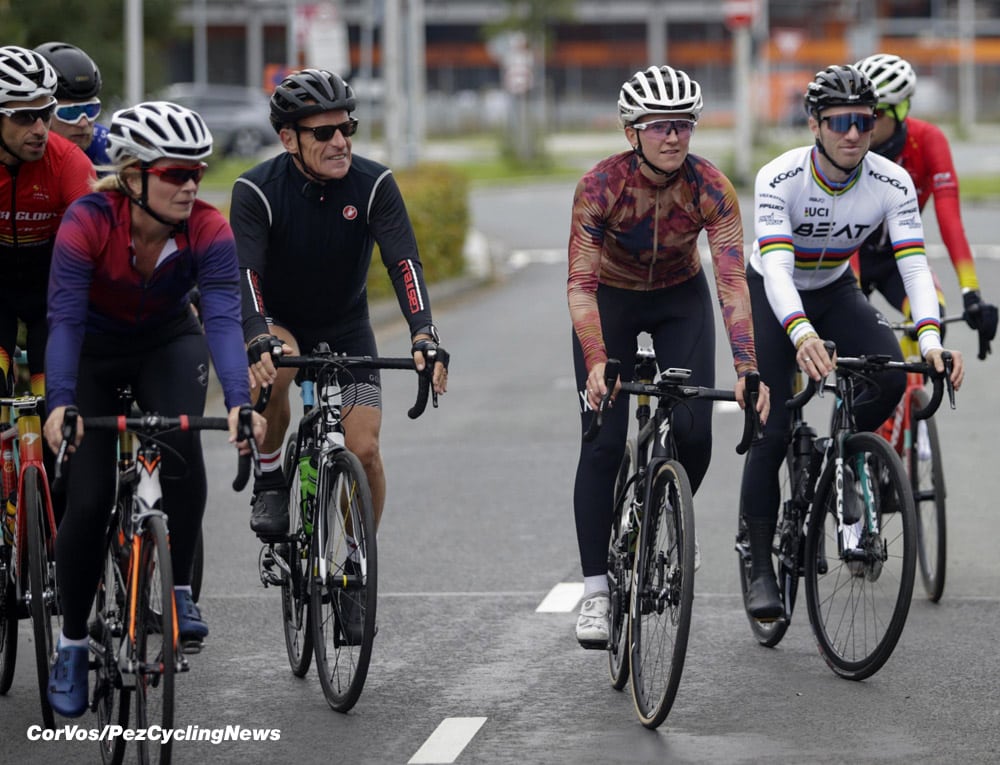 Riding with the fans

I opened by asking him how long he’s been riding professionally and if that career was always his destiny?
Yoeri Havik: I’ve been a pro for 13 years, since I was 18 years-old, starting with the Van Vliet team and now, of course, I’m with BEAT Cycling. In my mind I always wanted to be a professional bike rider, ever since I was three or four years-old but my parents wanted me to try other sports first, I did athletics and was OK at it but really wanted to be a bike rider. My mother’s little brother is ex-pro and now DS with Team SD Worx, Danny Stam. With his partner, Robert Slppens they were one of the best teams on the six day circuit of the time. [PEZ interviewed Danny back in 2011 as his career drew to a close] I actually partnered Danny in his last six day; that was Rotterdam in 2012 where we finished third to Peter Schep and Wim Stroetinga. But going back to the start, from a young age cycling was always part of my life, it was the norm. When I was eight or nine years-old I moaned so much to my parents that they bought me a bike and I started youth racing – it all went on from there. 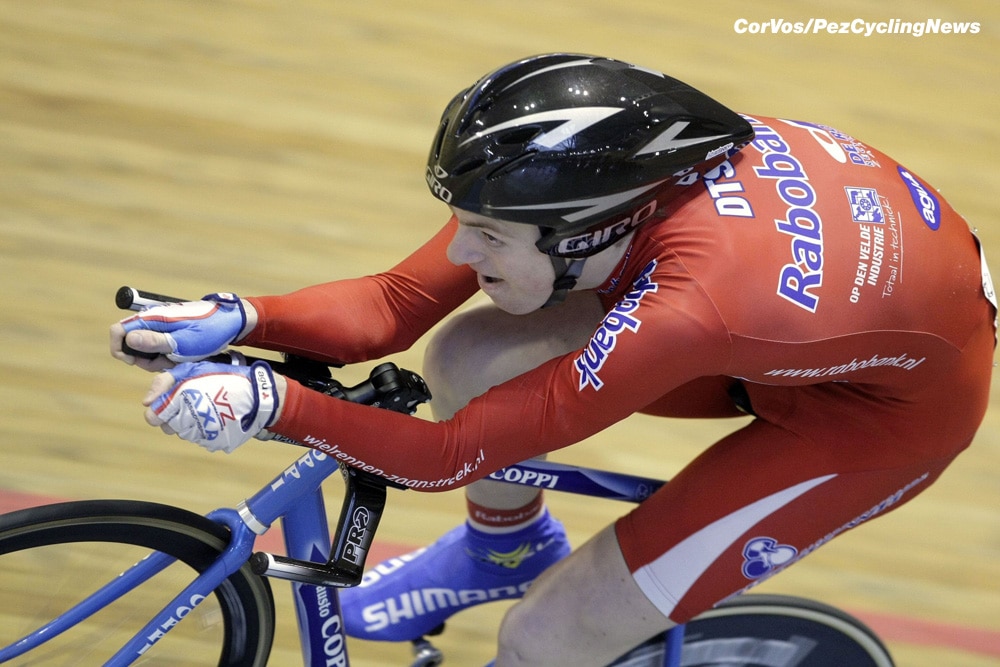 PEZ: The world title, a dream come true?
I wasn’t expecting it. It was my first individual Worlds, I’ve ridden the madison twice but this was the first time I lined up for the points race. Qualification for Worlds events can be complicated and sometimes the national federation didn’t have the necessary points. 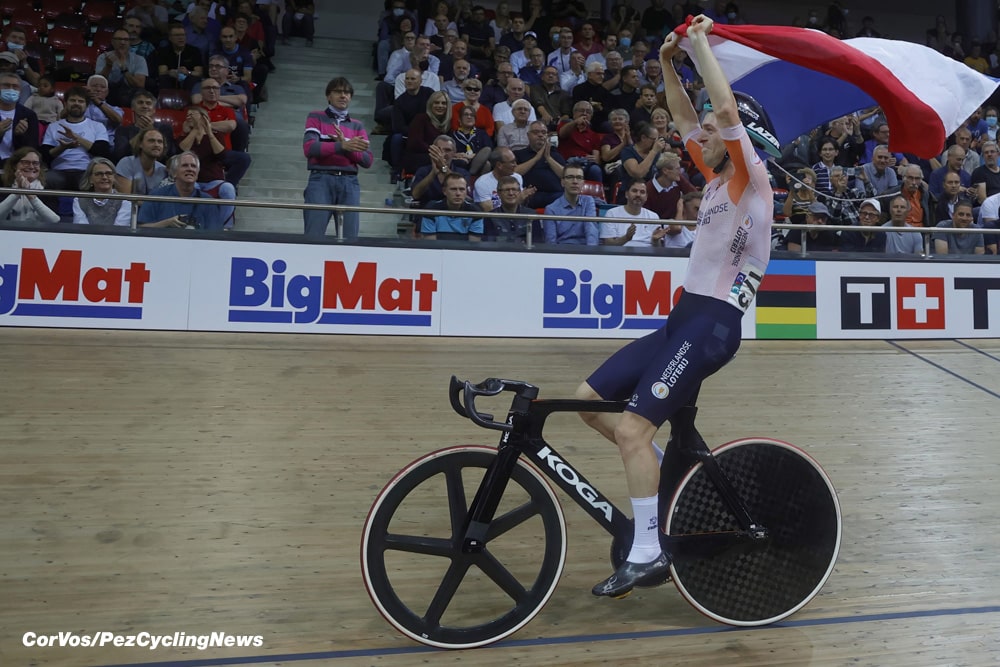 PEZ: Tell us about your preparation for the race.
I had a decent road season, in June I rode the Tour of Belgium then in July I went to Livigno on vacation and trained well there at altitude. The European Track Championships were in Munich in August but my partner, Jan-Willem van Schip was still recovering from Covid and we finished fourth to Roger Kluge and Theo Reinhardt. In September I was with the national team training in Portugal then I rode the Binche-Chimay-Binche, Vandenbroucke Memorial at the start of October, I was 19th and could feel I was riding strongly. I was confident and rested well coming in to the Worlds; I was hoping for a medal but actually dominated the race. 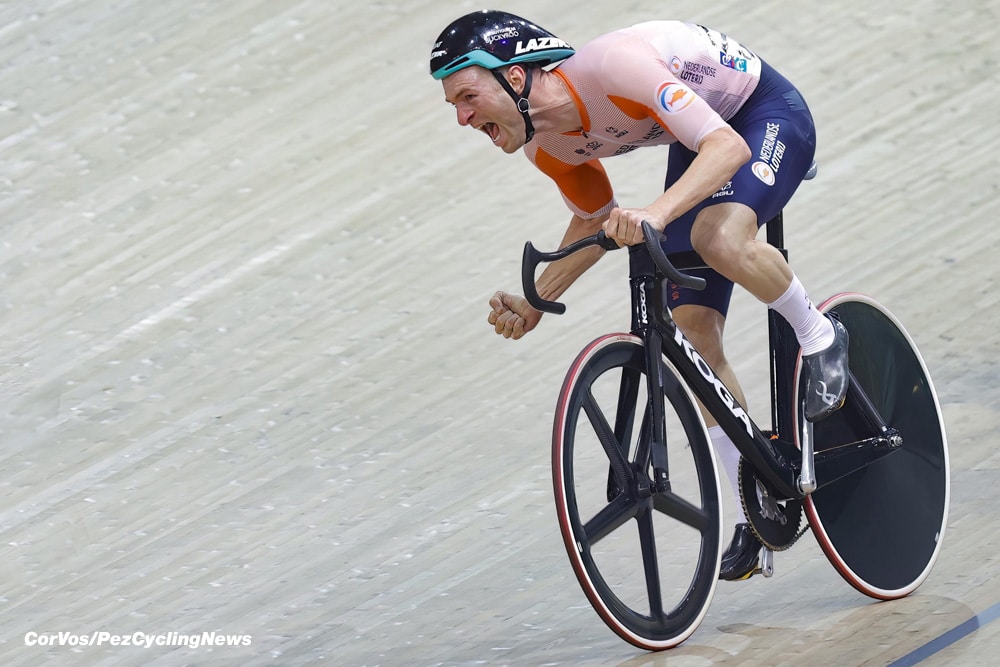 Happy with the win

PEZ: Roger Kluge was second, he’s no slouch. . .
Going in to the race, talking to our team manager he was saying that I should follow wheels and not risk blowing up, but I felt in control of my feelings on the bike and the race; with 19 laps to go I knew I was going to win, that was a special feeling. 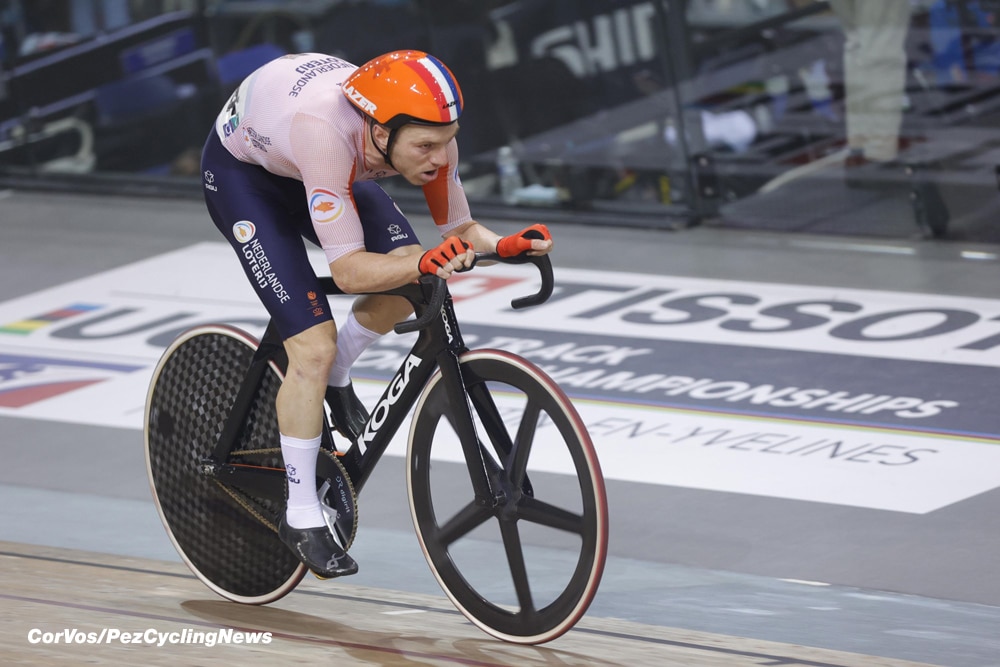 PEZ: Tell us about your Koga bike.
The design of the handlebars is important to me, I’ve figured out the best shape for me, I like to feel comfortable on the bike – and aero, of course. I was on a big chainring and sprocket with a waxed chain, that reduces the friction – but to be honest I leave all that stuff to the national team mechanic. 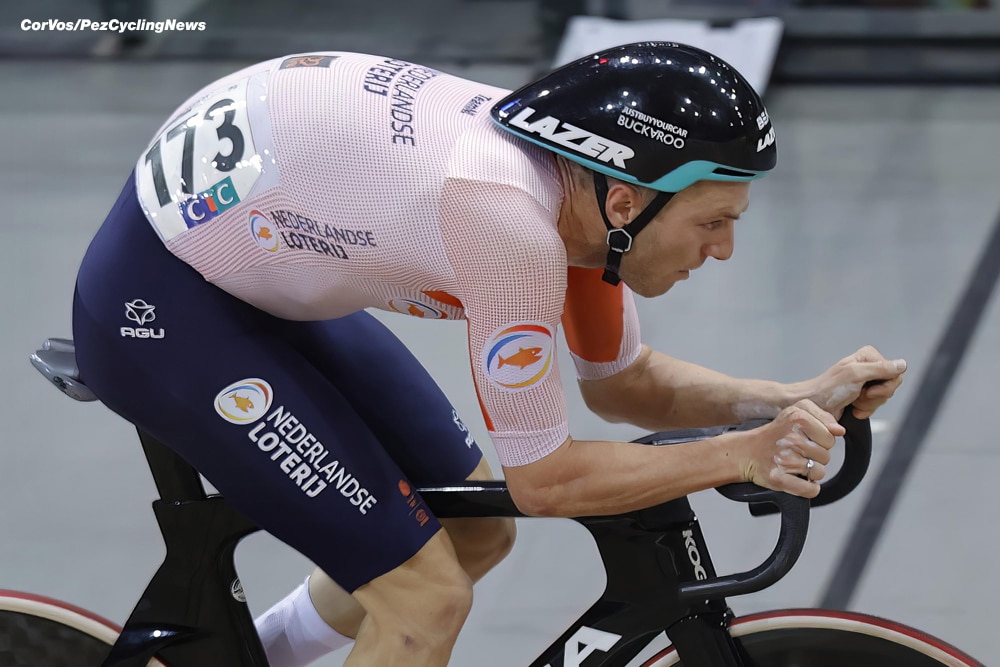 PEZ: When I used to watch you in the six days you were always very aero but have you done more work to perfect your position on the bike?
Just before we travelled to the Tokyo Olympics I spent some time in the wind tunnel but we didn’t alter my position by much. I’ve always been aware of the importance of being aero on the bike, especially in a madison chase when the speed is very high. I’m pretty flexible and always conscious of keeping my head and back low. 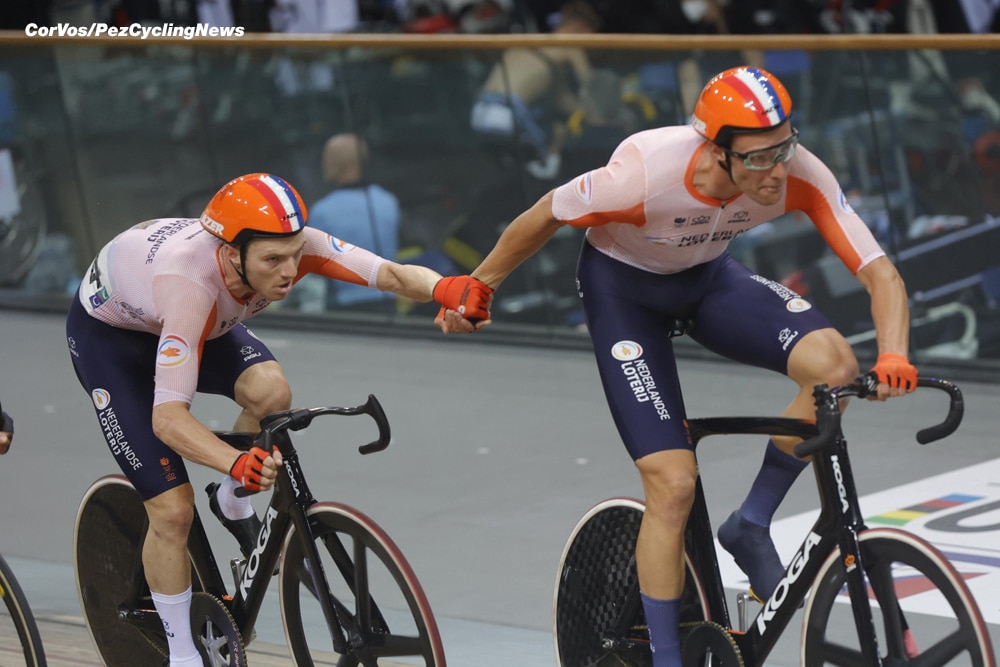 PEZ: 10 medals for the Netherlands at the Worlds, four gold, four silver and two bronze – what do you put that dominance down to?
YH: Our sprinter, Harrie Lavreysen is the corner stone of that with gold in the keirin and sprint, then there are the new Koga bikes we’ve had since 2019, they’re very fast, a big improvement on what we were riding before. The sprint programme they run at the Apeldoorn Velodrome where there’s so much concentration on strength training is a big factor too – until three years ago we were all under-geared which meant we were good in the six days where fast pedalling is so important but at the Worlds where we were up against other nations on big gears we weren’t as competitive. But then, when we had the courage to go to the big gears, the results came. 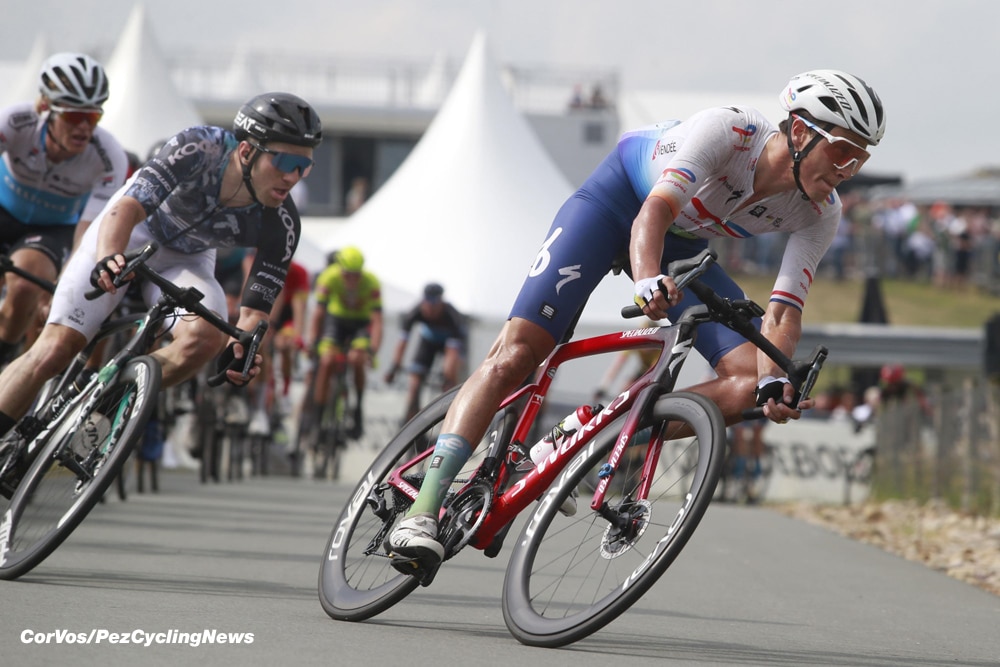 PEZ: The last two years have seen you come up a level, what do you put that down to?
I think it’s maybe the last three or four years; more hours on the bike and more structure to my training – and I’ve placed my full focus on the track. In the times of Covid when we couldn’t race I taught myself how to train better, at a higher level. The Dutch philosophy on the road was that you had to race a lot to improve but I found that I was always tired with racing so much and my level didn’t go up. I discovered that I need a balance between racing and training – for the Worlds I eased up into it so I was fresh. 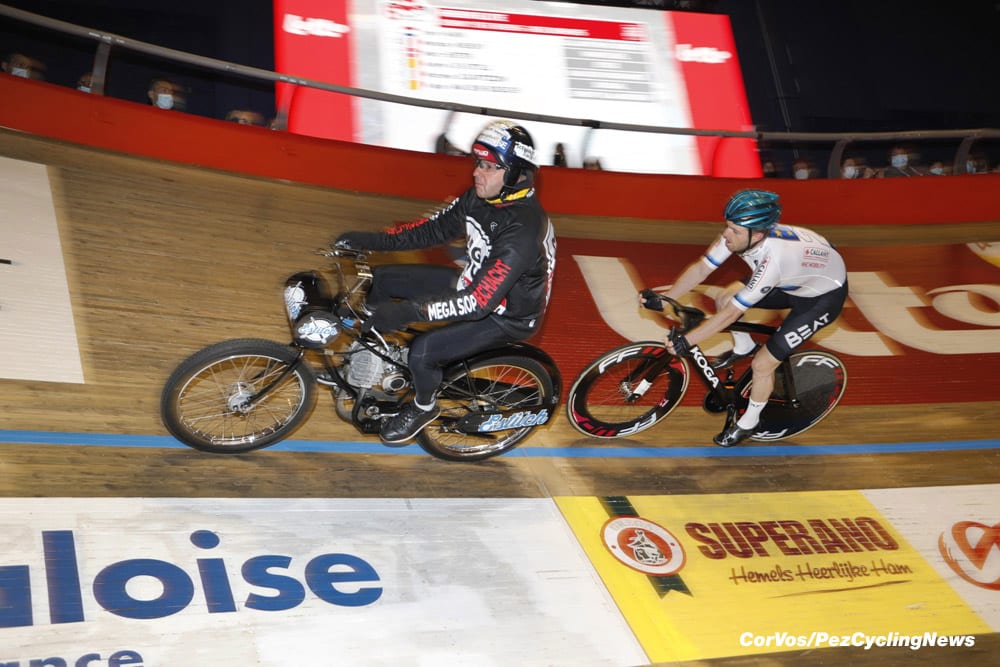 Gent ‘6 Days’ behind the derny

PEZ: How has the Media reaction been in The Netherlands?
It’s been really nice with TV interviews and you realise that the Worlds are way more important than the European Championships. Then there’s the aspect that it’s an individual championship so all the focus is on you; there was much more attention than when Jan-Willem and I won the European Madison Championships in 2021. But what was more important to me was that when I was in the velodrome the next day to watch the women’s racing, people like the Italian team mechanic and folks I know from the six days were coming up and congratulating me, people who know bike racing and appreciate the way I rode my race.

Havik and Wim Stroetinga during Six-Day’s of Rotterdam 2020

PEZ: How is your winter season looking?
I have the Gent Six Day with Belgium’s Fabio Van den Bosche – who was the bronze medallist in the points race – the Berlin Three Day; and the Copenhagen Three Day and Rotterdam Six Day with Niki Terpstra. These are Niki’s ‘farewell’ track races and it’s a real honour to be riding with him – we’re both highly motivated for them. 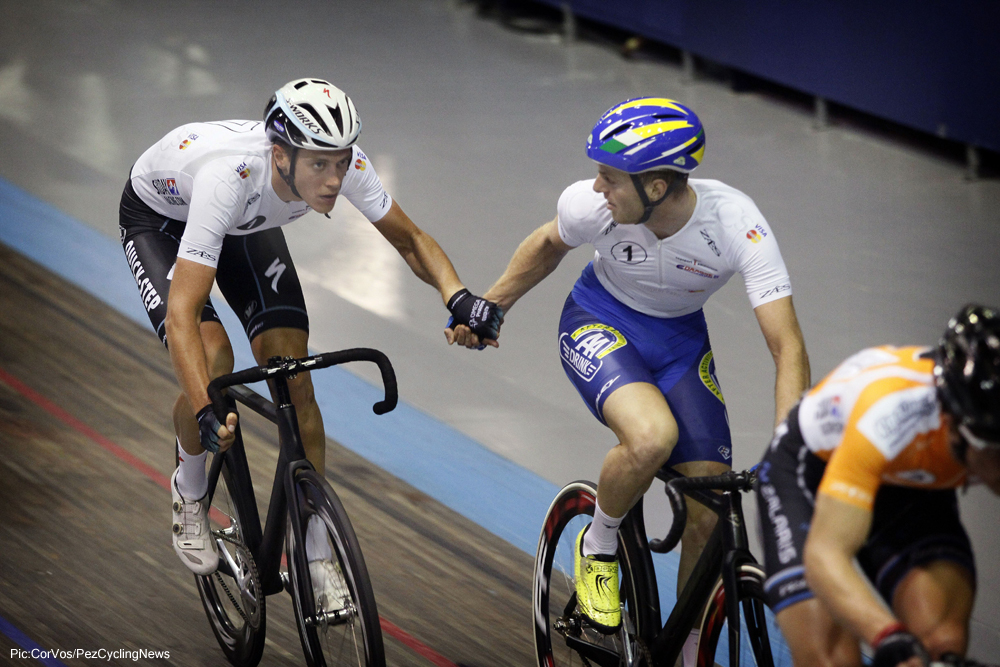 Havik throws Terpstra into the action in Amsterdam

PEZ: The Yoeri Havik ‘to do’ list?
I always wanted a rainbow jersey and I have that now. An Olympic medal is the goal now, perhaps with Jan-Willem in the madison in Paris in 2024 – that’s what’s motivating me now. 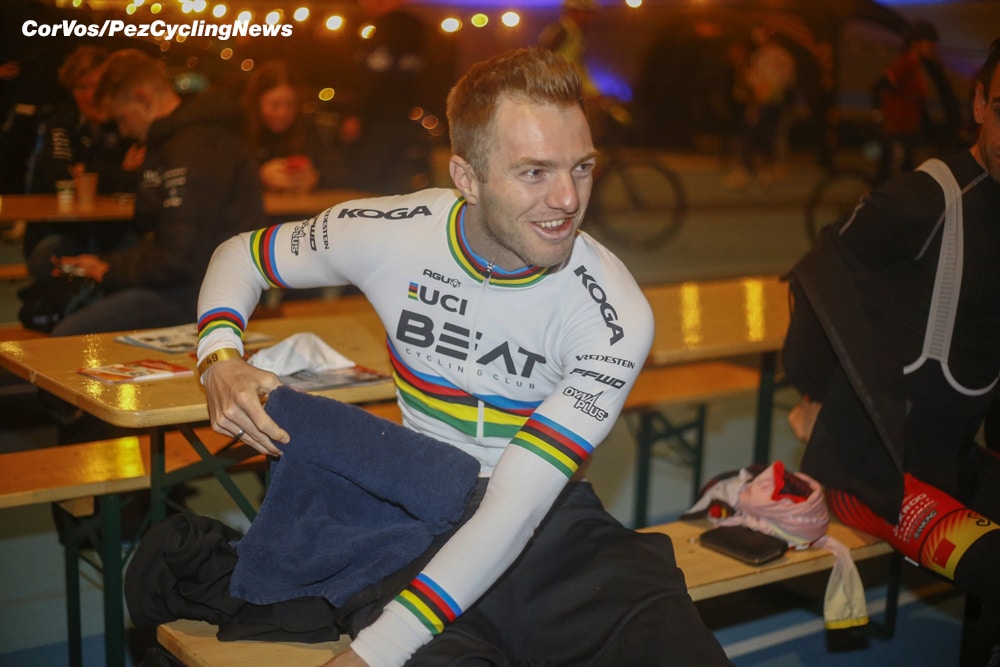 # A big thank you to Yoeri for the interview and good luck. #

EUROTRASH Monday: Tour’23, Cross, Singapore Crit and Everything Else!