Floris Gerts is the next young rider to join the all-powerful BMC team and much like his predecessors he has a fine palmarés already. Ed Hood caught up with Dutchman just after he crashed out of the Tour of Britain as his stagieire position was about to become a full time Pro contract with the team for 2016.

BMC are masters at spotting and nurturing young talents; Silvan Dillier, World Pursuit Champion Stefan Kung, Taylor Phinney all hit the ground running for the men in red and black and were able ‘play with the Big Boys’ very quickly. And it looks like their latest stagiaire, Floris Gerts may well be in the same mould; settling in to his role with the team very quickly having stepped up from the BMC Development team after a spell with the Rabobank Continental Team.

Gerts was on the attack in the final kilometers after following a move by eventual race winner Sean De Bie (Lotto Soudal). “I was trying to keep the pace high in the peloton for Jempy when one of the Lotto guys (De Bie) jumped from behind,” Gerts said. “I tried to get him back and looked back and saw we had a gap. But I made the mistake by taking over and riding also. I should not have done that because I had already been in the front group and was a little bit tired. When he attacked again, I could not follow.”

That press release was soon followed by another concerning Floris Gerts:

Gerts finished third Saturday at Primus Classic Impanis-Van Petegem. At the Aviva Tour of Britain earlier this month, he had been as high as third overall on the general classification before a crash forced his withdrawal. He started the season with the BMC Development Team and won the Under 23 edition of Omloop Het Nieuwsblad in July. In March, he was victorious at Dorpenomloop Rucphen and Stage 6 of the Tour de Normandie. “The BMC Racing Team is really the best team for me,” Gerts said. “I was already really happy at the BMC Development Team because of the atmosphere and philosophy. Everybody can have their own results while riding together as a team. With the BMC Racing Team, it is the same. There is a lot of appreciation when you do something for the team. In the end, it is a real team effort and it feels like family, which is great.”

Gerts said he aspires to learn from the team’s veterans while contributing whenever he can. “I can hope for some bigger races – like the WorldTour ones – to have a good role in helping the leaders,” he said. “In the small races, I hope I can show myself. It would be nice to win and make some steps in that way and become stronger and get results when I have a free role.”

Further proof that BMC have ‘done it again’ with Mr. Gerts. We’d ‘had a word’ soon after the Tour of Britain where the 23 year-old Dutchman unfortunately crashed, luckily without any lasting damage. 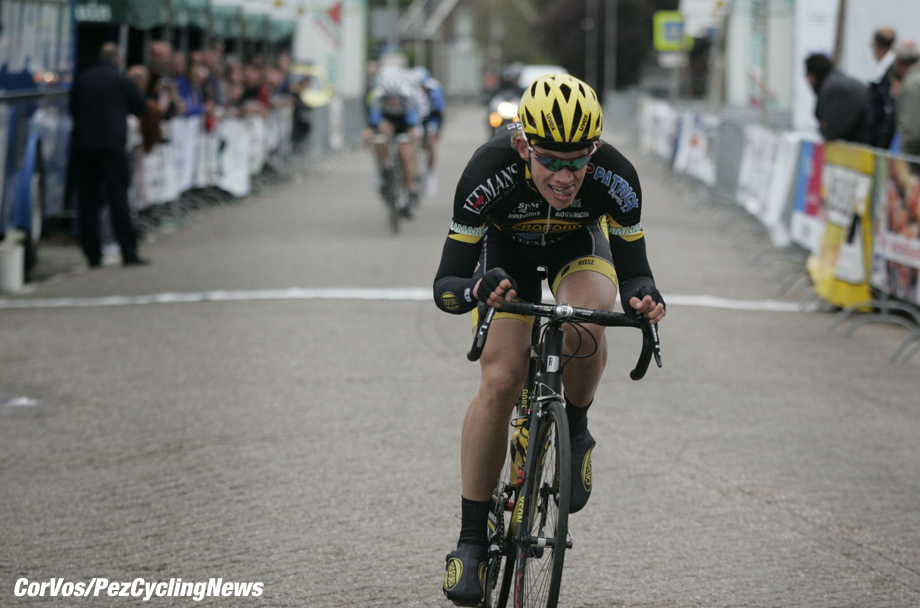 PEZ: You were a medical student, Floris?
Floris Gerts: Yes, I’ve combined studying for my Bachelorship and cycling for the last five years but I’ve passed my all exams and now I can focus on cycling full time.

PEZ: How did you get into cycling?
I was first a speed skater – which is a traditional sport in The Netherlands – and I used to train on the bike for that, in the summer. I raced on the bike as a junior, training for the skating and then after I quit the speed skating I carried on with the bike.

PEZ: Who did you admire as a young rider?
I didn’t really follow the sport when I was young because of the skating but now I have admiration for guys like Tom Dumoulin; it’s nice to see Dutch guys at the highest level. Greg Van Avermaet is another really great rider I like; he’s a constant, always there, always competing in every race and doing something in every race – I like that style of racing. 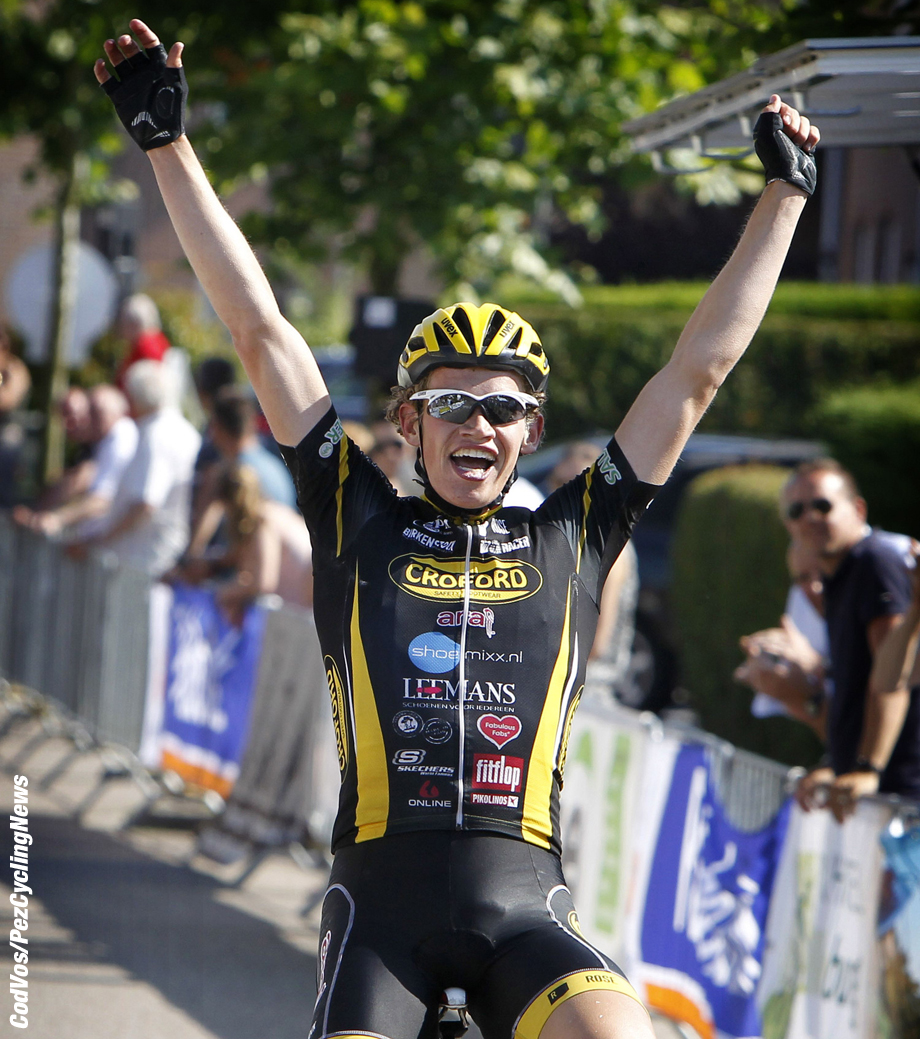 An early win in the Omloop Schin op Geul’13

PEZ: How did you get the ride with Rabobank?
I had good performances the year before I joined but I was a little older than is normal to join the team – usually the best Dutch juniors go to the them. They expected results quickly but I needed some time to establish myself and by the end of the season I showed I had the legs and took my chances. I went to pro kermises in Belgium on my own and won one; that was a real boost to my confidence.

PEZ: Why move from Rabo to BMC?
I didn’t really want to stay with Rabobank and BMC showed trust in me, the fact that they had confidence in me felt really good. And in the winter training camp, I felt comfortable with the team. 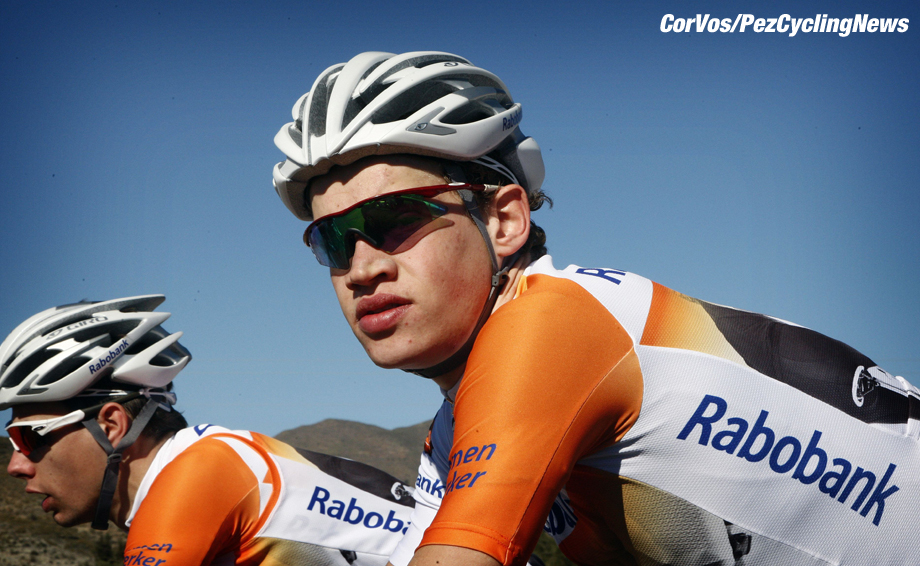 Training in Spain with the Rabobank Development Team

PEZ: Your U23 results this year have stepped up a level; stages in the Tour de Normandie and Triptyque Ardennaise and the U23 Het Nieuwsblad – why is this?
I was strong at the end of 2014 and trained really hard over the winter; I didn’t have any bad luck and with the confidence I felt from the team I didn’t have doubts in the finals, I just went, I had it in my mind that, ‘I’m strong enough!’ 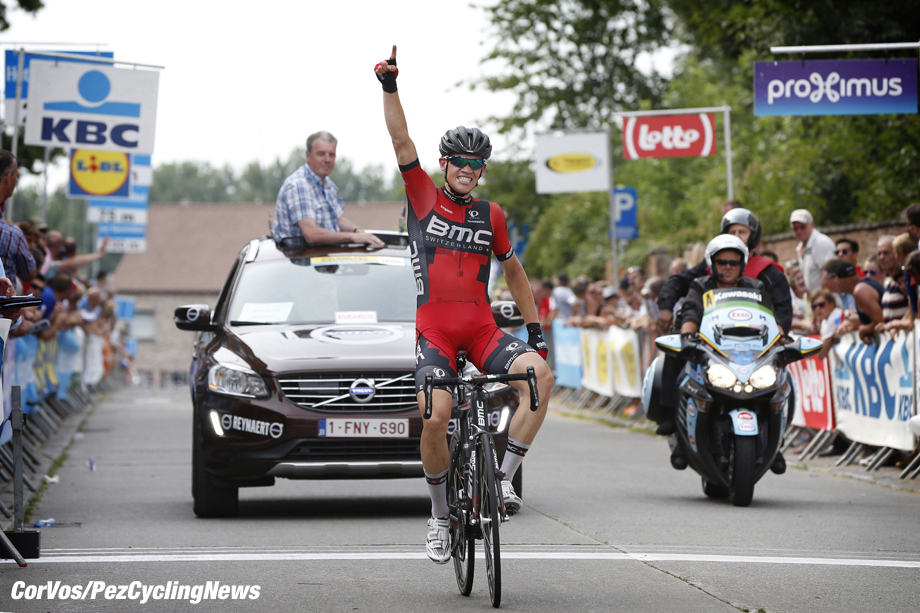 Winning the Under 23 OmloopHet Nieuwsblad’15

PEZ: Was it a surprise or logical consequence getting the ride with the World Tour team?
This season with the BMC Development Team was ‘all or nothing’ for me; I didn’t really have high expectations but new that my future was secure due to my background in medicine – everything on the bike is ‘extra.’ For sure I knew from years before that guys could get stagier rides so I knew it was possible.

PEZ: The London race was your first big race for the team – how was it?
It was a beautiful race, the parcours was perfect for me and I was able to show what I was capable of for the team. It was special riding with Philippe Gilbert, I tried to do my best for him, he’s a real leader and I learned a lot in a short period of time. And of course we won with Jempy Drucker which was special; a great weekend. 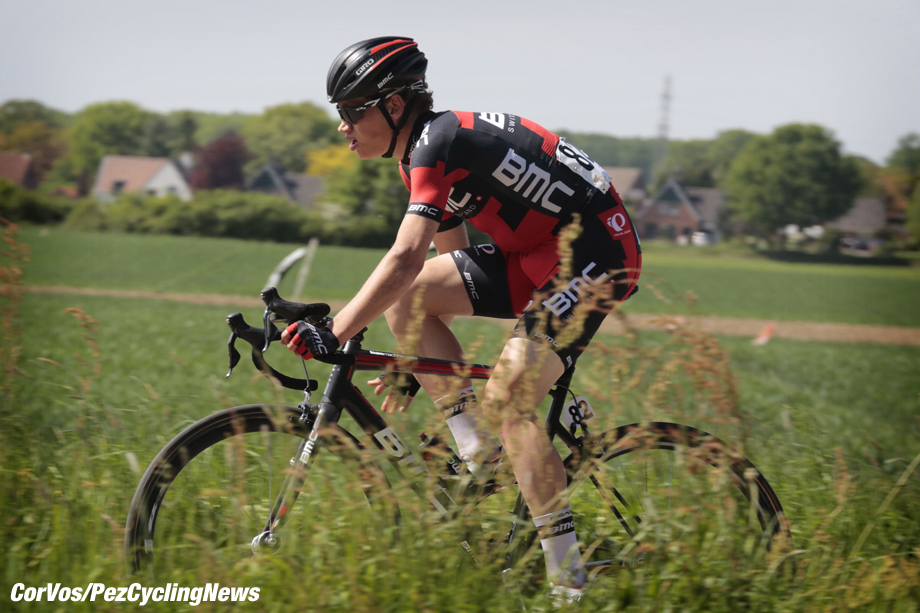 PEZ: The Arctic Tour was your first stage race for BMC. . .
On day one we rode to make sure we had Ben Hermans in the final – we knew he had great shape from his ride in the Tour of Poland. Ben took the lead on when he won Stage Three, he was really powerful, and we had to defend on Stage Four; it was really nice to ride for him but in the end we lost out in the overall with some back luck – that’s bike racing, it happens. . . But of course Silvan Dillier won the last stage and finished second on GC for the team.

PEZ: What’s the biggest difference between the U23 and World Tour races.
In the U23 races the winning move can go at any time and you have to be attentive all the time; with the pros the middle part of the race is when you can relax a little. Of course it pays to stay near the front of the race. I don’t find the distances as problem – I could handle the longer distances as a U23 – it’s more the speed. When it’s relaxed it’s quite slow but when it’s fast then it’s really fast! When it’s fast it’s very hard, much harder than with the U23’s – that’s the biggest difference, the distance isn’t the problem, it’s the sheer speed. 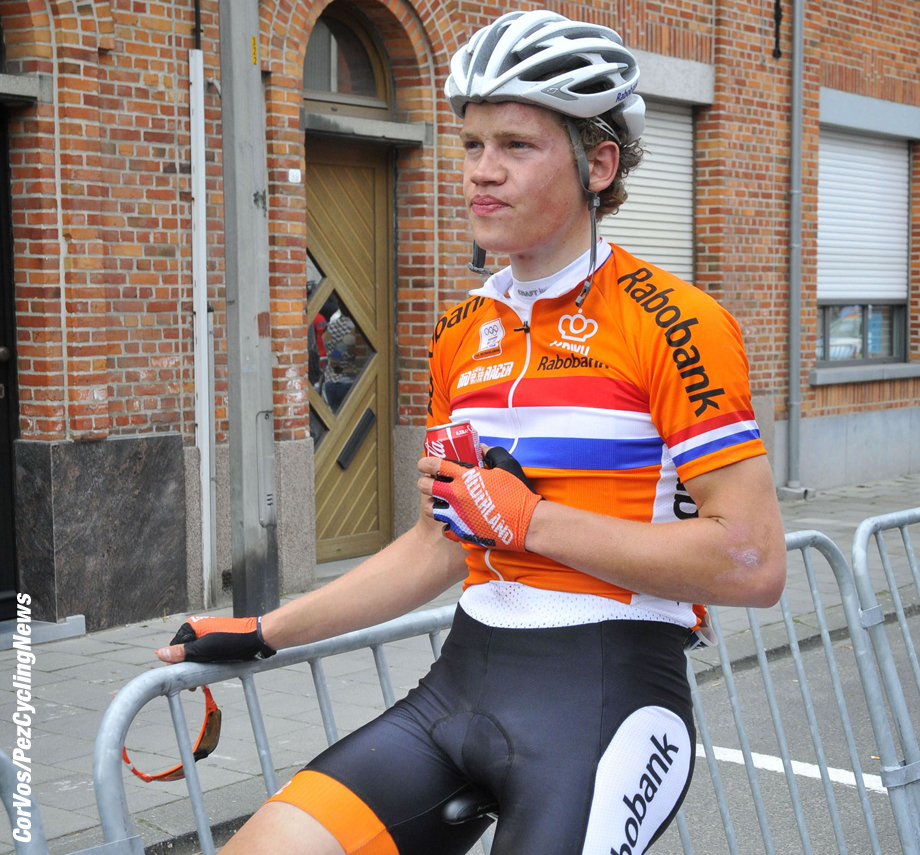 Riding the 2014 Under 23 Tour of Flanders for Netherlands

PEZ: What’s the ultimate goal?
I hope that I’ve shown what I’m capable of and that I can handle the higher level; to ride for the team as a professional in 2016 would be really nice. . .

#With thanks to Floris and to BMC press officer Georges Lüchinger for organizing the interview for PEZ.# 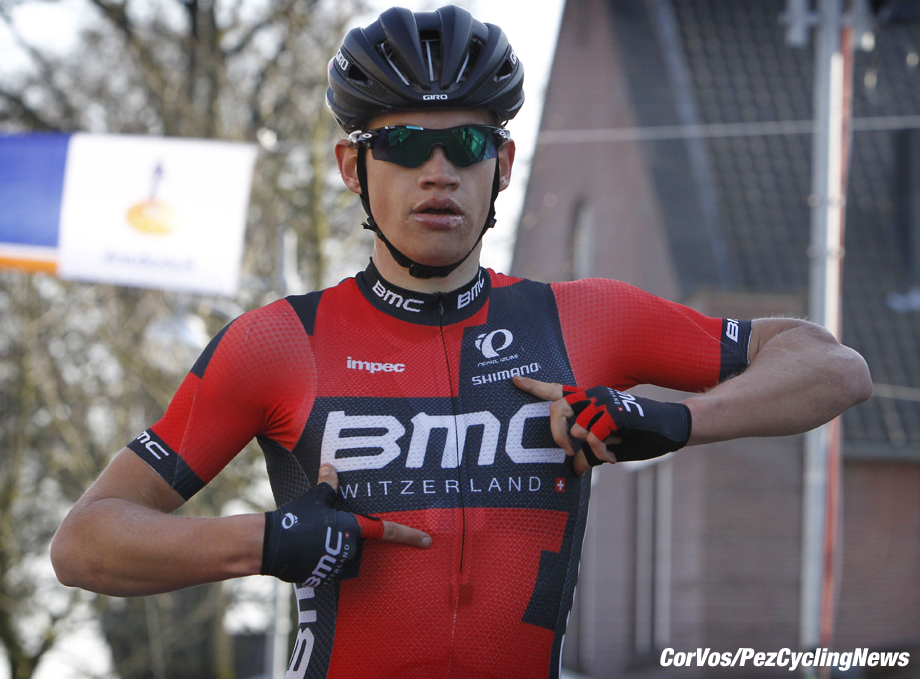