PEZ decided to track down a rider from the New World – Svein Tuft; one from the Old World – Rubens Bertogliati and just for good measure, one from Scandinavia – Fredrik Ericsson, for their thoughts on the day shift at Varese (oh! and Lance!).

Canada’s Svein Tuft may have been ‘lucky seventh’ in the time trial at Beijing, but Lady Luck ran out on him today as his front tubular expired with five kilometres to go. Despite that misfortune he took the silver medal, just 43 seconds behind new world champion, Bert Grabsch of Germany. Would he have won?

PEZ: Well, Svein?
Svein: That’s a lot of conjecture, but I did have a bike change with five K to go, so it would have been close, that’s for sure!

When I flatted the front tyre, I didn’t want to risk fiddling around adjusting skewers, so I yelled at the mechanic; ‘bike!’ and we changed to my road bike, which had aero wheels on it. It was just one of those things and I’m delighted to have won silver. 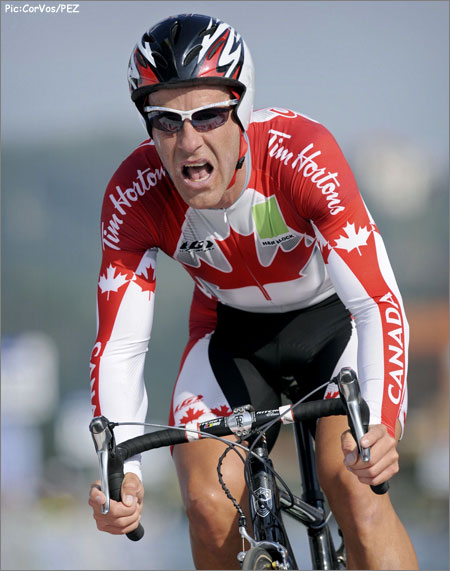 PEZ: What have you been up to, since we spoke to you in Beijing?
Svein: After The Olympics, I was pretty much tuckered out, so I decided to ride the Canadian track championships, just for a change. They went well; I won the pursuit and Madison and was second in the points.

After that I rode the Tour of Missouri and was third overall on GC behind Christian Vandevelde; I was really happy with that. I haven’t done a lot of specific time trial training, but I still feel fresh, enjoying my racing – sometimes at this time of the year you’re tired, but I’m still keen to race.

PEZ: What was the game plan, today?
Svein: At the Worlds, you can’t think about ‘conserving,’ you have to go for it – I rode it perfectly; I had gas right to the end. The climb was long and tough, it wasn’t steep, but it was like a highway gradient, you had to keep on the power all the way, or you could loose a lot of time. 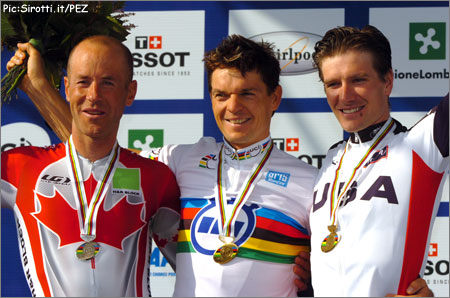 PEZ: There were crashes in the U23 race.
Svein: Yeah, the first part of the course had some corners that kinda snuck up on you! I rode the course yesterday, in a group, but the roads weren’t closed and we weren’t going at race pace. In the early part of the race there were a few corners where I was against the barriers, thinking; “oh Jeez!”

PEZ: Hardware?
Svein: I rode the same Orbea that I rode at Beijing – the Orbea guys have been very good, helping me get a great machine organised – with 54/44 rings and 11 to 21 at the back with Vittoria chrono tyres on a Zipp 1080 front and a Zipp Sub-9 rear disc. 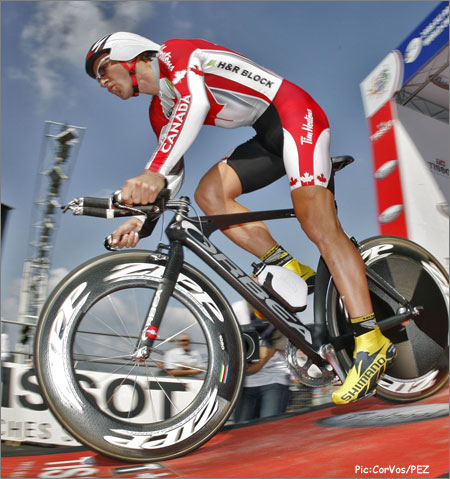 PEZ: Grabsch and Levi’s rides, surprising?
Svein: Not so much Grabsch, he’s one powerful dude; but Levi is powerful and aero, so yeah his ride wasn’t what was expected.

PEZ: Next season?
Svein: I’ll be riding for Garmin; we agreed to the terms at the Tour of Missouri. I know Jonathan Vaughters from the days we rode at Prime Alliance together, it’s a two year contract and I’m very happy with things.

The World TT championship will be a big target for next year; this year has been such an eye opener for me – it has let me see what I’m really capable of. 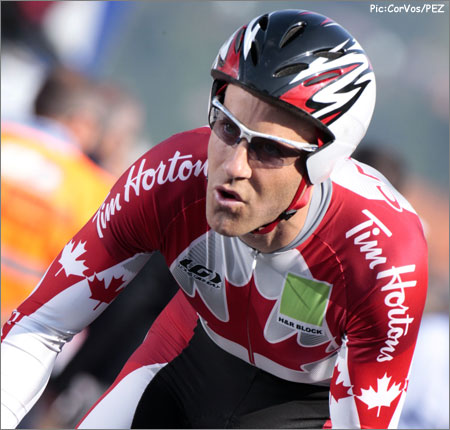 PEZ: Sunday’s road race – your tip?
Svein: If I was a bettin’ man, I’d go with Bettini; he’s a tough little guy, on home roads and has his home crowd behind him. Watch out for Michael Barry (Canada) though, I was riding with him in Girona last week and he’s in good shape and very focused. 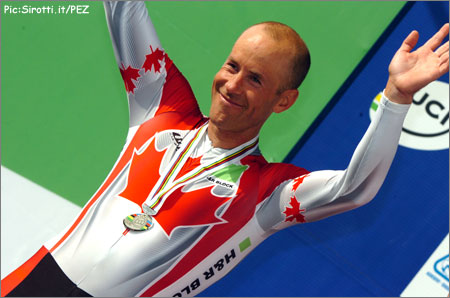 PEZ: A beer tonight?
Svein: I’ve already had a few!

***
Next up, we said, ‘ciao’ to Rubens Bertogliati, who filled the place left vacant by Swiss Olympic TT champion Fabian Cancellara’s absence.
***

PEZ: You’re not really a ‘chrono man’ though?
Rubens: This year I did some good rides against the watch, my preference is for the road race, but with the absence of Cancellara I thought I would like to ride the World Time Trial Championships once during my career.

PEZ: What did you think of the course?
Rubens: For me it was a little too flat and windy, it was for the big gear, power riders. 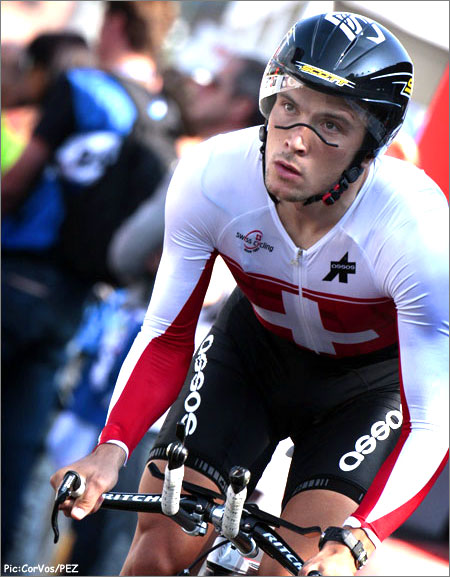 PEZ: Did the medallists surprise you?
Rubens: Yes, but today with no Cancellara and on this type of course, which was a big, fast loop around the lake, it was a course for Grabsch. He’s a strong rider, the long flat stretches on the big gear to the end, suited him.

PEZ: Did you ride your Scott Plasma?
Rubens: Yes, it’s a very good machine, new for 2008 and I put down much of my improvement against the watch this year to my new bike.

PEZ: How does 2009 look?
Rubens: I will not be with Gianetti (Saunier/Scott manager, Mauro) for next year, I am ending my contract.

Trying to find a new team will be difficult, but I am waiting on answers.

It was a bad situation after the Tour, when the Saunier team was withdrawn because of the Ricco affair – it was hard to motivate myself to train. 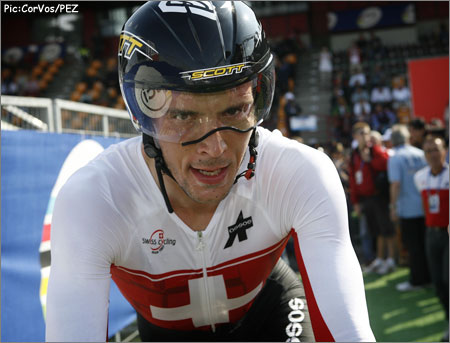 PEZ: Rubens’ tip for Sunday?
Rubens: Valverde and Bettini; if it is a group, then Freire – he is always good at the Worlds and is faster than every body else.

PEZ: And Lance?
Rubens: If he is returning for the right reasons – and I mean by that, the fight against cancer, then it is good for the sport.

***
Finally, we headed north to Sweden to hear what Swedish Elite Time Trial champion; Fredrik Ericsson had to tell us.
***

PEZ: Happy with your ride, Fredrik?
Fredrik: I’m not overjoyed, but I’m happy. I thought before the start that if everything went right, I could get maybe 10th, I finished 20th at 2-27, probably what I expected.

PEZ: Did the medallists surprise you?
Fredrik: Svein was a surprise, he was seventh at Beijing, I think, a top five wouldn’t have been unexpected, but to get the silver was a surprise, yes. Grabsch was no surprise; I was talking to Gustav Larsson (Swedish Olympic TT silver medallist) the other day and he said that he expected Grabsch or the other German rider, Tony Martin to win because the course was much flatter than Beijing. 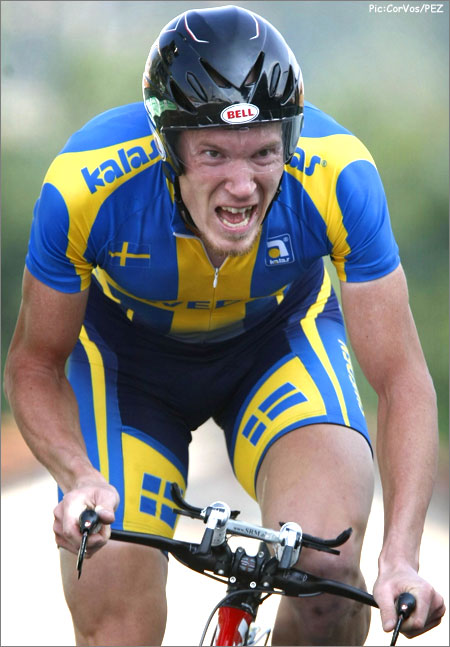 PEZ: How did you build up for this race?
Fredrik: I’ve only been a ‘chrono specialist’ for the past year, I’ve been racing on the road for three years and it’s taken a while to learn how to pace myself against the watch. But probably the biggest difference now is that I do a lot more training on my time trial bike.

The first year that I raced, I rode my TT bike six times, and four of those occasions were in races; but now I ride it an average of once per week. And since the end of August, to get ready for today, two or three times per week.

It’s not a comfortable position and you have to get use to it, in fact, I do specific stretching exercises to try and make it more comfortable.

PEZ: Who will win on Sunday?
Fredrik: I’m not riding myself, unless someone gets sick, but I think it will be Freire – for his fourth title.

PEZ: Lance?
Fredrik: I’ve always been a fan of Lance and overall I think it’s a good thing for cycling; everyone is talking about the Tour already and it’s promoting a good cause – Livestrong. Having said all that, if I was Alberto Contador, I’d be pissed!

***
With thanks to Svein, Rubens and Fredrik for their time and patience.