This time last year, PEZ gave the old crystal ball a thorough polish to see if we could pick which of pro cycling’s neo-pros might turn into stars. Some excelled, but others not so much – here’s our report card! 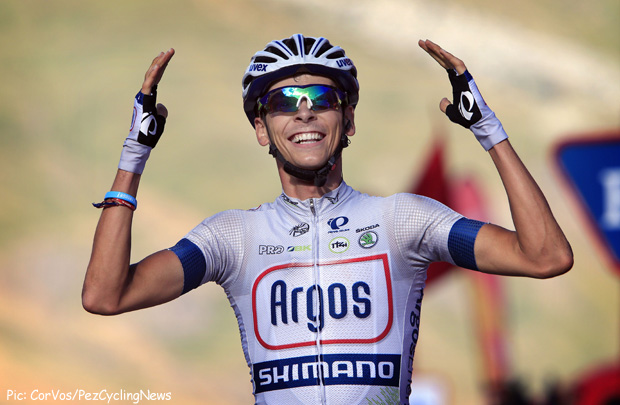 The perma-smiling young Frenchman’s season was a hit. Two fabulous stage wins in the Vuelta a Espana in a debut year is a breathtaking achievement. They were both, in their own right, very smart and gutsy pieces of riding: the first being a hit ’em with everything late charge to win an uphill sprint ahead of a breakaway group; the second a cleverly calculated two-up sprint over Rigoberto Uran.

Barguil also had a couple of decent one-day performances but at 21 years old, it was the sheer resilience he displayed to handle such a barrage of World Tour events (Vuelta, Tour of Poland, Paris-Nice, Criterium du Dauphine, Basque Country) that suggest a very big future. 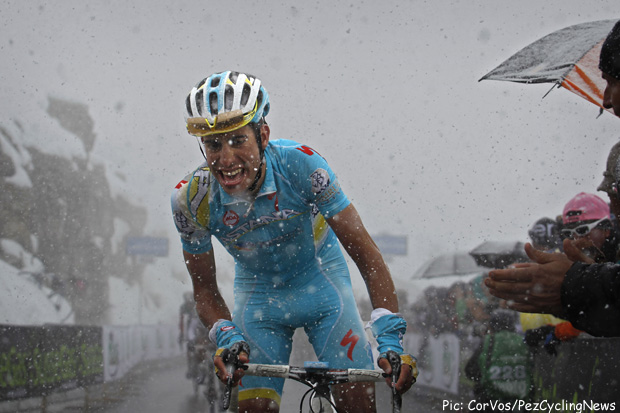 Aru did exactly what we hoped he would – stand tall when he needed to, ably supporting Vincenzo Nibali’s terrific Giro d’Italia win, often through abysmal conditions.

Although he only raced sparingly through the second half of the year, it was a long season starting in the Tour de San Luis in Argentina and ending nine months later at the GP Bruno Beghelli.

Aru was a terrific fourth overall at the Giro del Trentino, eighth at the Tour of Austria and seventh in the one-day classic Tre Valle Versine.

The biggest result was surely fifth to Tre Cime di Lavaredo on a miserably cold and snowy day as he helped Nibali put the tin lid on the Giro. Guts, strength and climbing legs – Aru is here to stay. 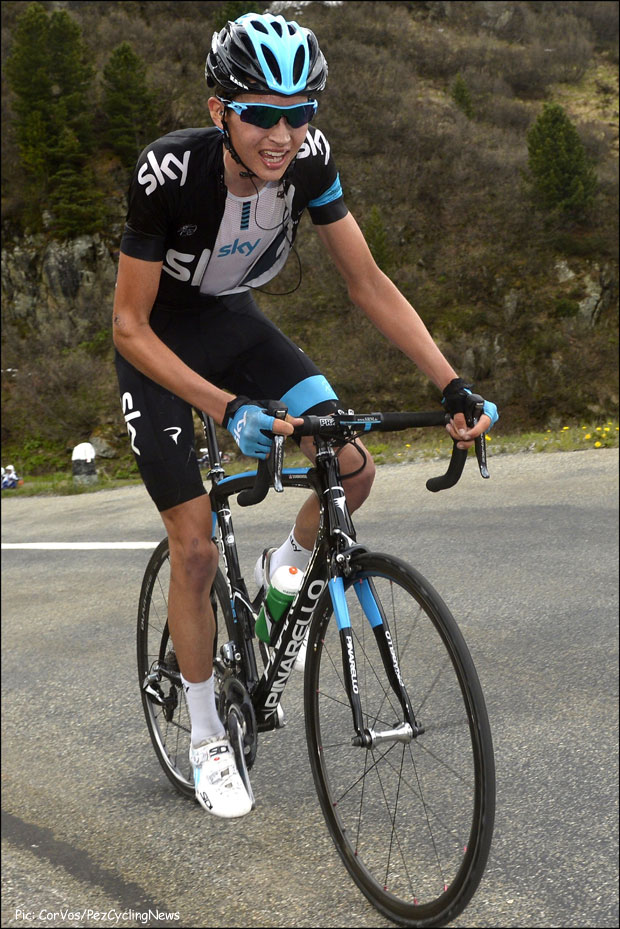 Although Dombrowski was forced out of the USA Pro Challenge due to dry air nose bleeds, when he was hoping to shine as team leader, 2013 was a pretty successful debut all round. The young American climbing talent learnt first-hand what it means to be part of Sky’s stage-racing juggernaut, helping Chris Froome to success in Oman and at the Criterium International, as well as supporting stage victories for the likes of Porte and Henao in the Basque Country.

Joe also made the podium as Sky took out the TTT at the Giro del Trentino, and had good mountain rides in the Tours of Switzerland and Austria. All in all, despite tumbles in Switzerland and crashing out of Burgos, it was pretty satisfactory. 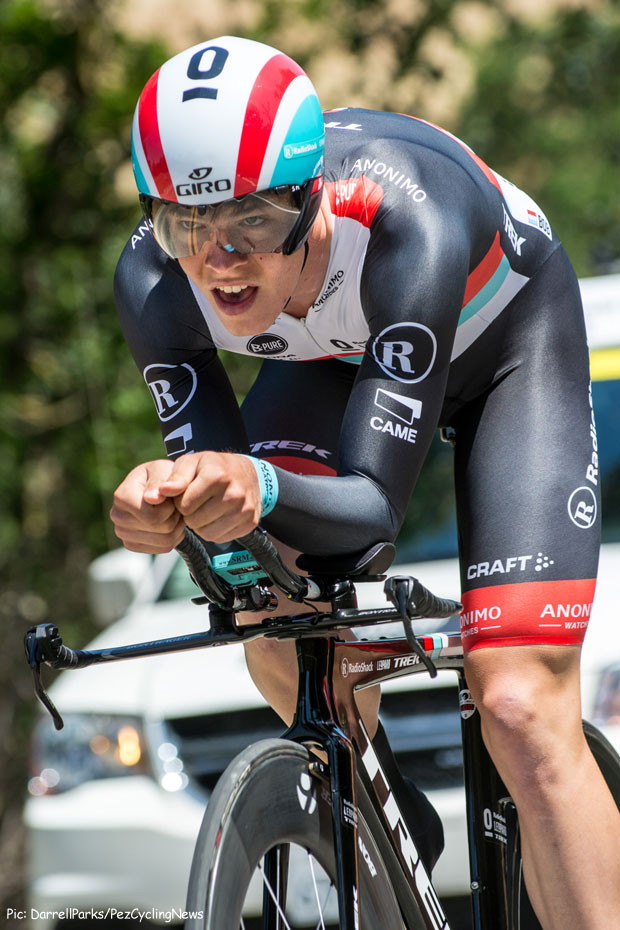 There really wasn’t much that Bob Jungels could have done differently to start his World Tour career. In a frankly Hollywood opening, he soloed to a near one-minute victory margin at the GP Nobili Rubinetterie in March. Savvy and lucky enough to get in the move after just 11kms, he dropped his companions on the last climb with 25kms to go and pretty much TT-ed it all the way to the line. The peloton couldn’t close him down.

He backed that up with a stage at the Tour of Luxembourg, and the national road and TT titles, and a raft of hugely impressive rides in TTs and stage races all through the year. And he’s only just turned 21. We got this one right. 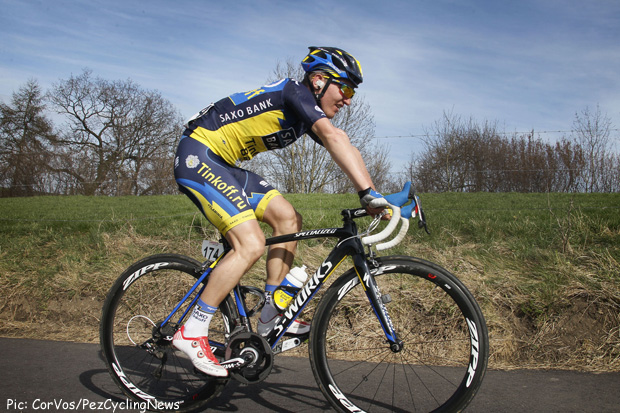 Again, 2013 was about learning the ropes in the big league and McCarthy did that nicely. He was prominent on the front of the peloton at the Tour of California, managed to get a top ten on a stage when racing for himself, and put in a power of work at Criterium International and Circuit de la Sarthe.

McCarthy also helped Roman Kreuziger to take the Amstel Gold, so a very successful start to his World Tour career.

There were the usual pro rider’s niggles: illness (tooth infection = time off bike mid-season; crash at the Tour of Turkey = skin off body mid-season), but riding from the Tour Down Under to Tour of Beijing, you’re going to encounter some less pleasant days. 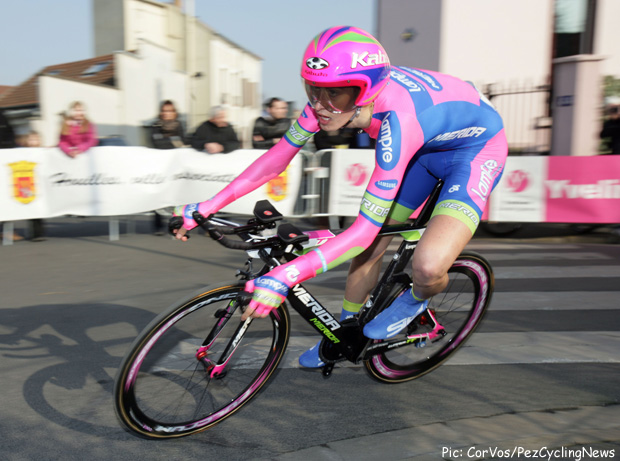 An unfortunate crash in the Giro d’ Italia’s seventh stage was a big set-back for Cattaneo, in a real baptism of fire. He was thrown into races as diverse as the Tropicale Amissa Bongo in Gabon, Omloop Het Nieuwsblad, Paris-Nice, Tour of Flanders and Liege-Bastogne-Liege. Pretty much every racing scenario possible!

But the fact that Lampre-Merida saw fit to take a young neo-pro to a Giro d’ Italia that they had a serious chance in suggests that Cattaneo is making the right noises. 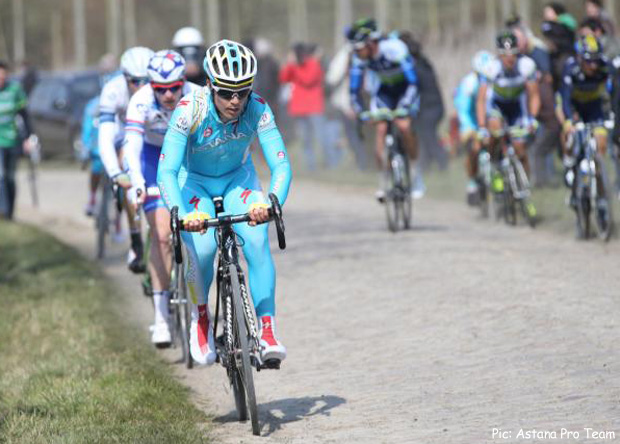 Huffman’s first year will always be asterisked for some by the rather … (cough) … outspoken comments he made regarding his team’s Franco Pellizotti-signing farrago. Huffman didn’t race as much as he’d have liked, but he managed to get around stage races from the early-season double-header of Qatar and Oman through to Beijing in October.

The highlights were supporting an Iglinsky stage win in Belgium, and a strong ride in the Eneco Tour helping Grivko onto the podium, and getting in the break on stage four. A steep learning curve of a year – new culture, bigger workload, more pressure to perform – with a lot of work to do in 2014, but, on the whole, not too bad at all. 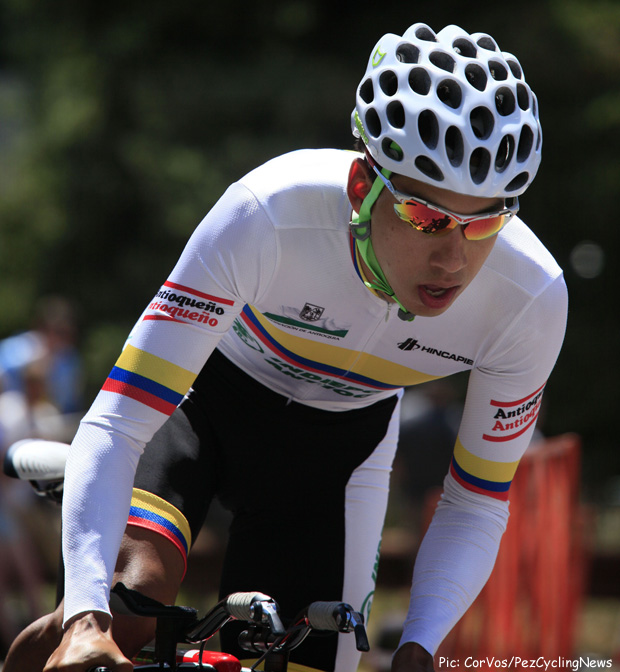 Undeniably talented, Ospina signed a two-year deal with Movistar, thanks to the help of Sergio Henao … but it wasn’t a happy debut season. Ospina had trouble from the start: he was one of thirty-five riders blasted out of the Vuelta Asturias on stage two, didn’t finish the third stage of Route de Sud … and that was pretty much it.

He’s not been retained by Movistar, so hopefully, he can return to Colombia and find himself again.

Verdict: Unfortunately, it’s got to be a ruthlessly results-driven F 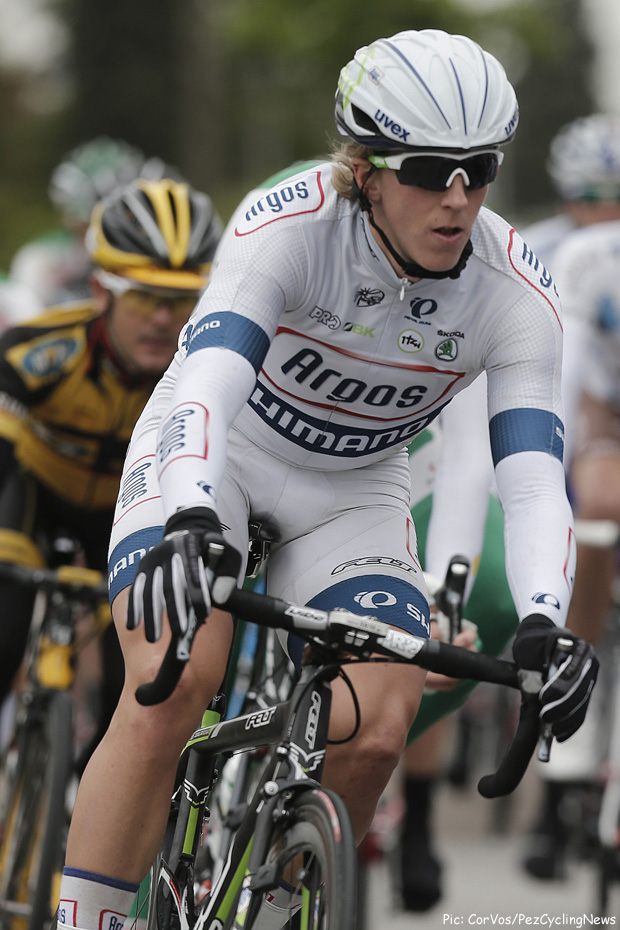 No individual wins for the young Swede, but lessons galore as he finished stage races about as far apart on the calendar as possible – the Tour Down Under in January and the Tour of Beijing in October.

He did take a win in a three-man TTT at the Suzuka Shimano road race, so he has a taste of the podium. And if you’re wanting a decent team to develop on, Ahlstrand is in the right place.

Verdict: A solid C – something to build on 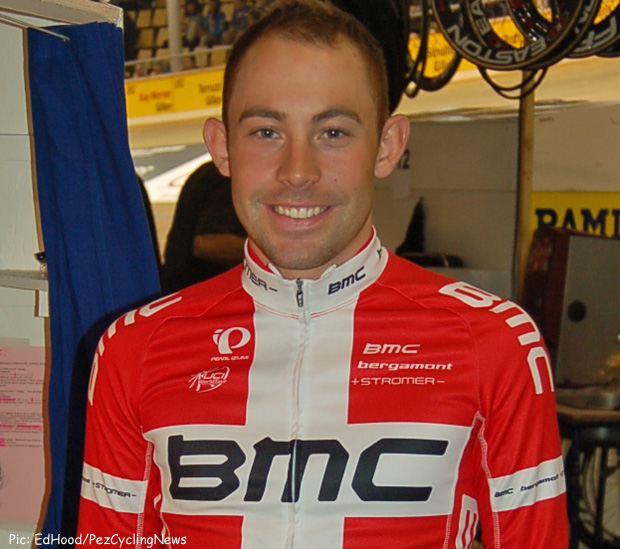 The former Danish champion is still only a youngster, let’s not forget, so if his results weren’t stellar, it wasn’t a dead loss of a season. But it was hard. Time-cut at the Criterium International was hard to take, but then he was far from alone when Chris Froome destroyed the field on the final stage.

The upside was helping BMC’s former world champion Thor Hushovd win two stages and the overall at the Arctic Race of Norway, and making a debut Grand Tour appearance at the Vuelta.

A solid start, and paying your dues for the team … can’t ask much more than that. 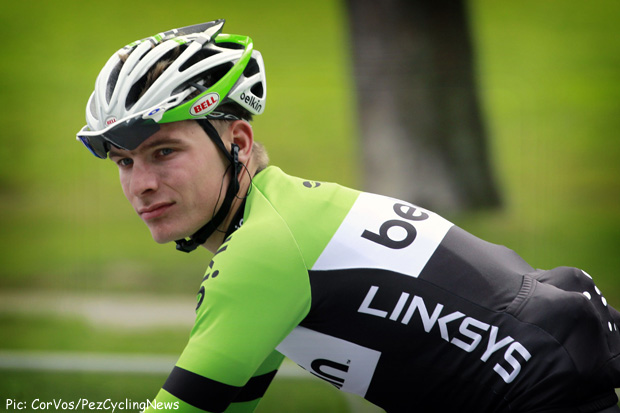 It took a while for Hofland to register a win, but once he started … three stages and the overall title at the Tour of Hainan, as Belkin swept all before them, were the highlights. Hofland also scored encouraging results in the Tours of Denmark, Luxembourg and Beijing, and learnt a lot about managing himself and his body by racing in Europe, Asia and North America.

The Dutch squad still have Theo Bos to lead them in the sprints in 2014, but as Mark Renshaw’s gone, Hofland should get even more of a chance next year.

Verdict: An encouraging B- 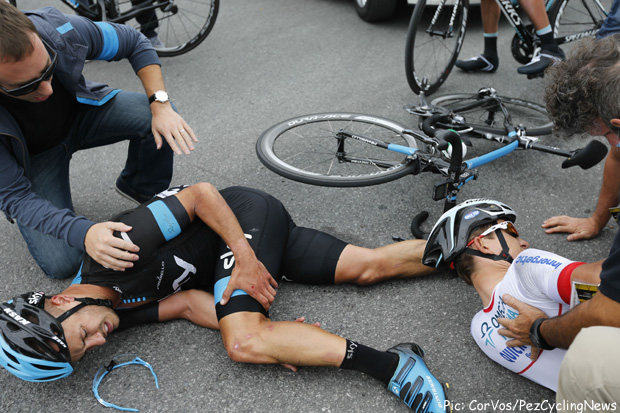 Racing-wise, the season started in mediocrity, worsened into misery and a general concern about the disappearance of 2012’s form … and ended about as catastrophically as possible. On the road, there were almost as many DNFs as finishes, and not a single placing in a top-50, as Sky’s training load was being suggested as a cause of Tiernan-Locke’s suffering.

The really bad news came first in September and then just before Christmas: the UCI have opened disciplinary proceedings against JTL for alleged biological passport violations, apparently stemming from his time at Endura.

Tiernan-Locke will have a hard time defending himself, but while many have gleefully invoked the knee-jerk to stick it to him while he’s down, he has his passionate supporters, too.

Genuinely, we hope that JTL will come up with a sound, viable and truthful explanation for the anomalies which the UCI have apparently uncovered … but even if he clears his name officially, it’s a hell of a long way back to where he was just twelve months ago. 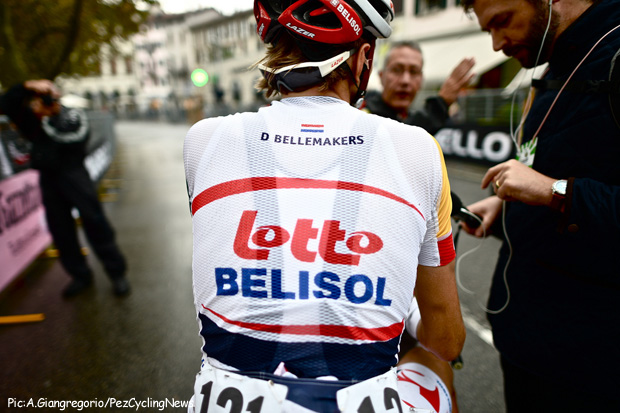 The giant Belgian didn’t set the World Tour alight results-wise, but that’s not what he was hired for. He did his job, exactly what would be asked of him by his directeurs. Supporting his team leaders, he raced hard over three continents in nine countries: in Gabon; Canada; France, Spain, Italy, Holland, Poland, Belgium and Austria, from mid-January to early October.

He helped Kenny Dehaes win Halle-Ingooigem; Adam Hansen on a Giro stage win; and Frederique Robert to a stage at Tropicale Amissa Bongo.

Pez’s most notable connection to Dirk came as the curtain fell on his pro career – our man Angelo was on the line at Il Lombardia as Bellemakers completed his final race, and you can see some of Angelo’s beautiful and affecting shots here. Good luck for the future, Dirk.

Stay tuned to Pez as we prepare to unveil our choices for 2014!