A Day At The Races: One Last Kermis

Oudenaarde, West Flanders; 11:30 am on a Sunday morning and runner turned cyclist, Dan Patten is munching his plate of pasta; pre-race carbs are part of the ritual in Flanders… We head back to the Heartland for one final trip to the home of the kermis for 2010. 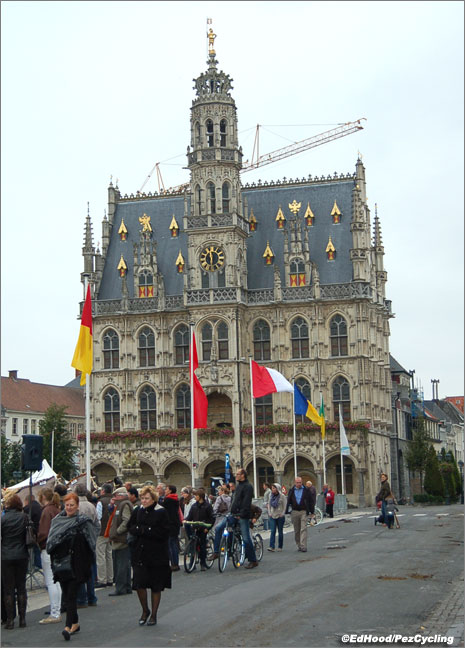 We’ve been interviewing his landlord, Callum Gough over at the Carilion bar on Oudenaarde’s lovely old town square.

Albeit the horse show which is taking place has made us be careful where we put our feet.

Englishman Callum was a good road man, in his prime at the start of the 80’s with a stage win in the Tour of the Pyrennes among his palmares.

He owns an apartment in Oudenaarde which is ‘open house’ for young Scottish and English cyclists.

Dan rode last year for Magnus Backstedt’s team but decided that for 2010 he needed to immerse himself in the high speed, strength building world of the Belgian kermises. 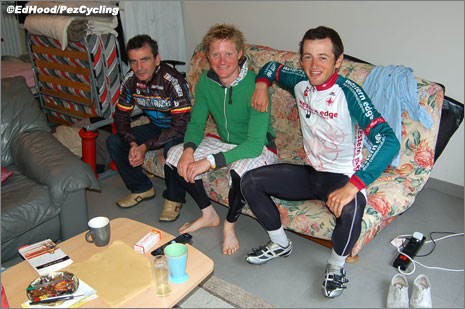 Flanders team mate Paddy Clark pops by for a chat but isn’t racing today – he’s going home to sleep for a few hours.

Dan’s racing though, his second day on the trot, we should have seen him in action at Eerdinge on Saturday but Vik couldn’t cope with the penny farthing race.

Today he’s riding at Passandale, around 45 kilometres away, a couple of supporters, Steve Skuse and Mark Daly are over from Britain for the weekend and they’ll drive him to the race. 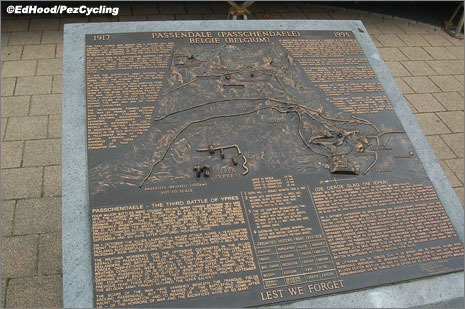 Passendale was the scene of brutal and prolonged, fighting during the First World War. 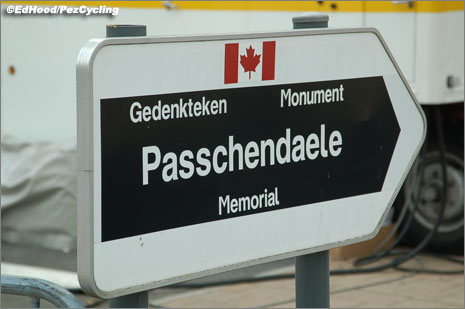 Everywhere there are signs marking the way to where thousands of British, Commonwealth and Belgian soldiers are buried.

Fortunately, it’s only fighting of the two wheeled variety today. 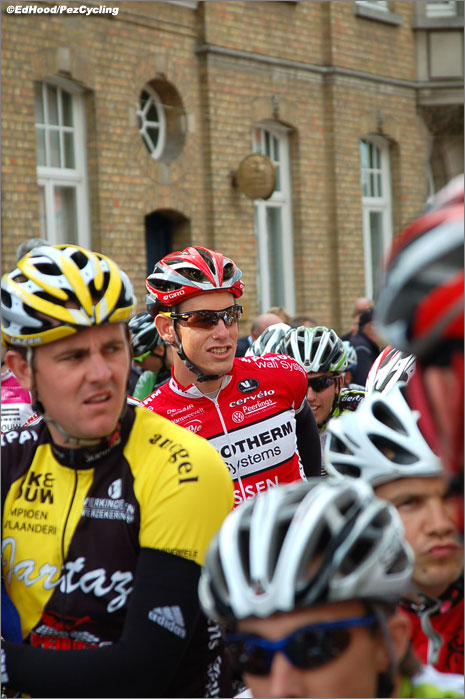 Clinton Avery is back in club gear for today’s race, the Radio Shack stagiaire’s kit he wore at the Championship of Flanders is hanging neatly back in the flat – but that mega Trek is here. 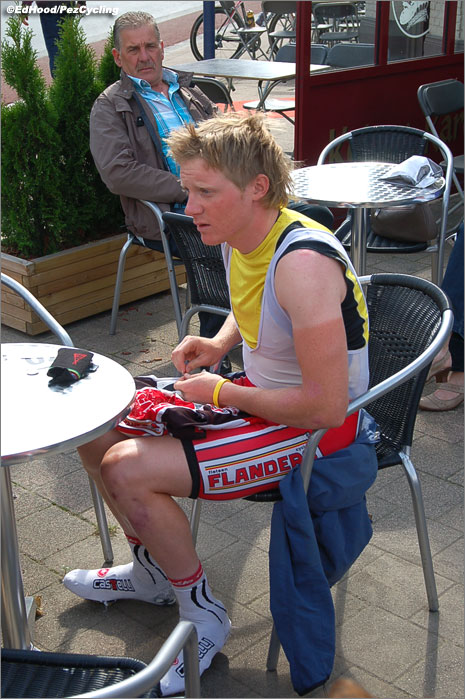 Dan pins on his numbers at the cafe table. 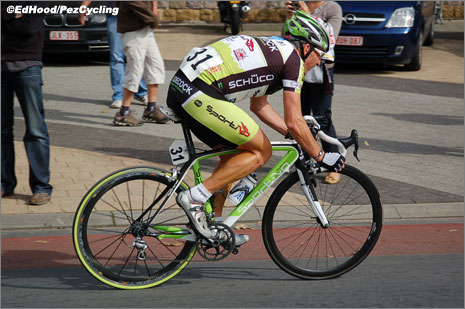 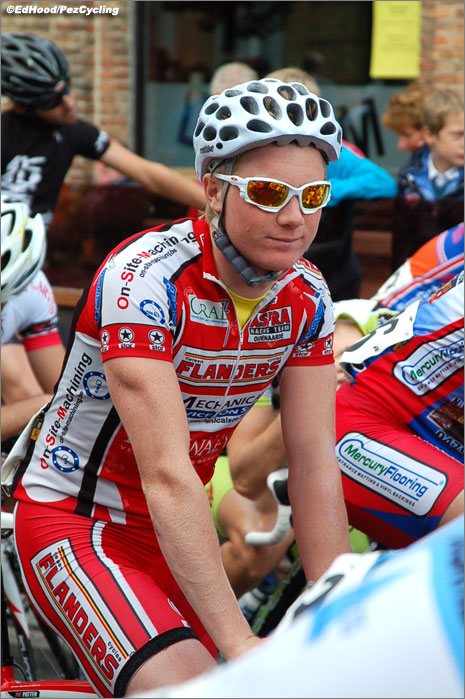 Hot favourite for the day is Gino De Weirdt, with 70 riders lining up to tackle 20 laps of a technical circuit which includes concrete section road and a drag to the finish – but at least the sun is shining. 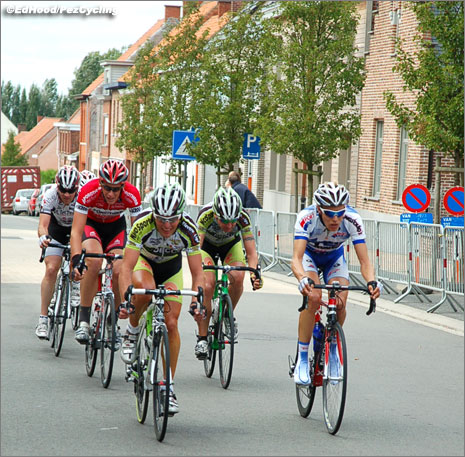 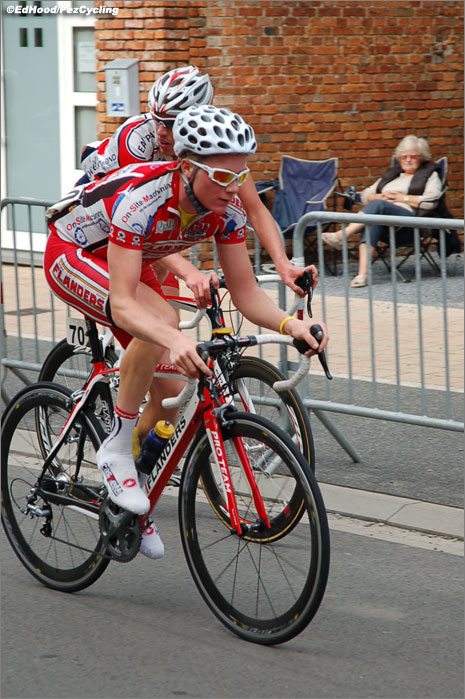 Dan is active early in the race but misses the seven man break which bolts on lap three – with De Weirdt and Avery in there, the question is; ‘who’ll bring them back?’ 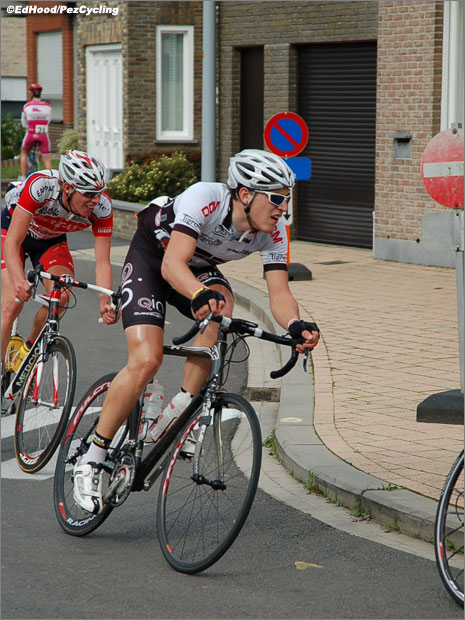 One of James Spragg’s QIN team mates, Jonathan Breyne is riding and he’s missed the move, too. 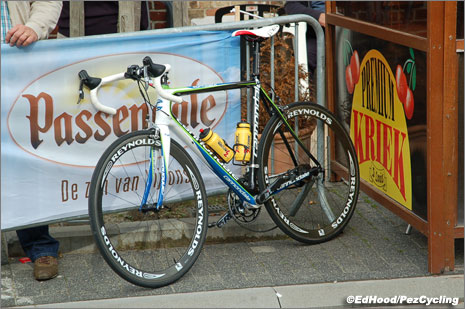 Kermises are hard on equipment and a Cannondale’s rear mech self destructs. 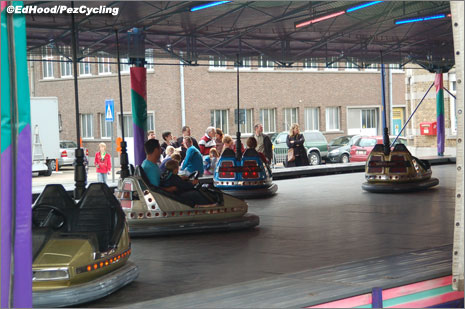 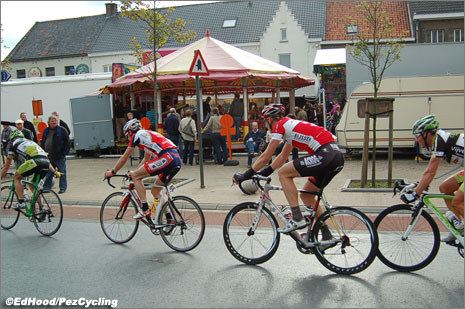 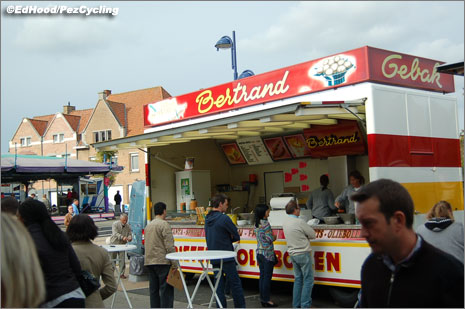 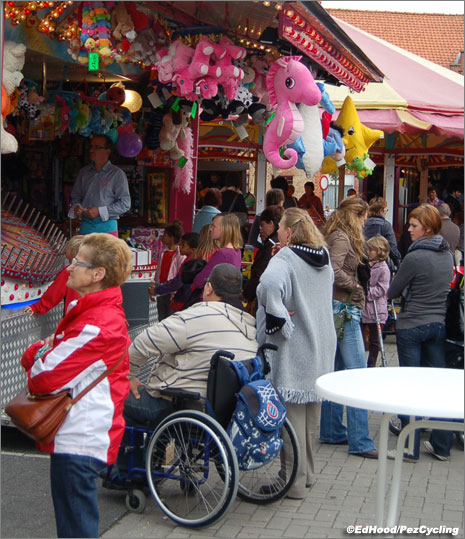 ‘Kermis’ in Flemish means ‘fair’ and ‘there’s all the fun of the fair’ going on in the town square; including the dodgems, where Stuart reckons Belgians learn to drive. 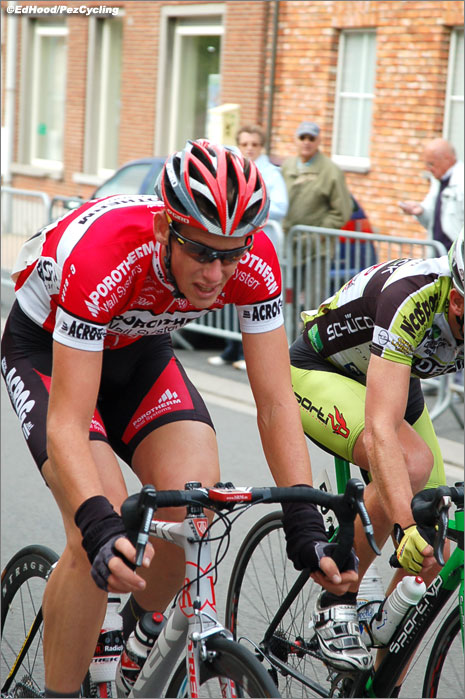 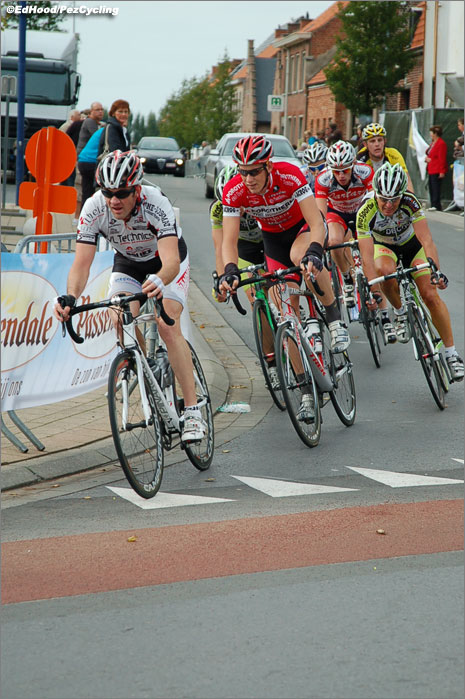 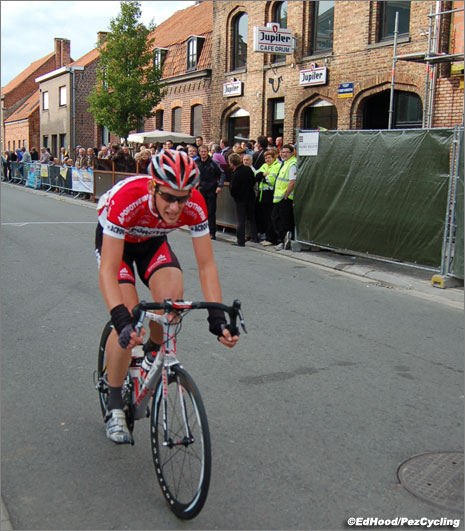 Out on the course there aren’t many laps to go as Big Clinton tries a solo move. 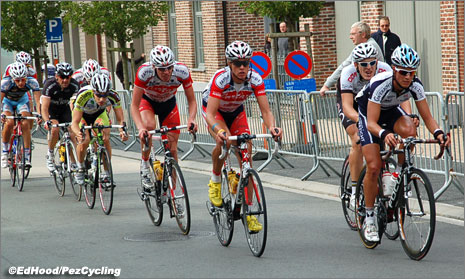 The chasers are scattered all around the course but those who slide too far back are told to sprint and finish. Those Flemish commissaires like to keep it neat, no lapped riders. 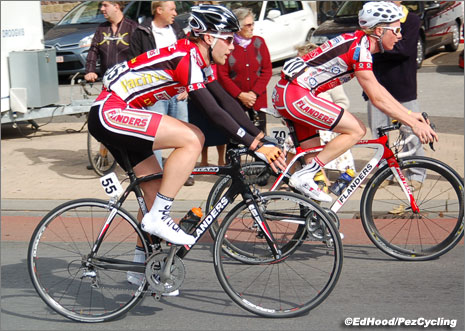 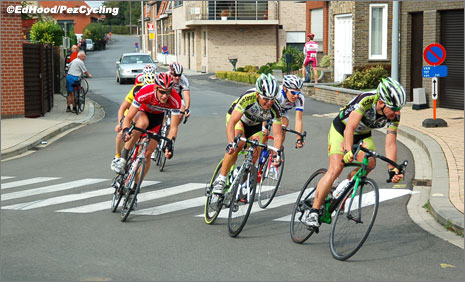 Dan is still there but in the second group, he missed a split; today won’t be his second win of 2010. There are other Flanders riders in the race but they’re from the UK based team, run by the frame importer. 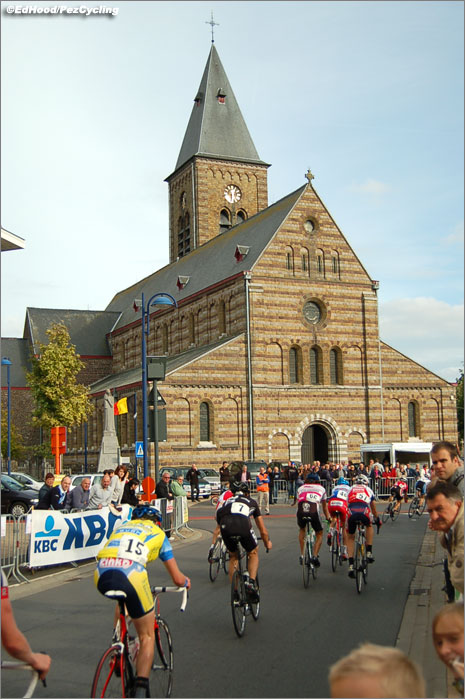 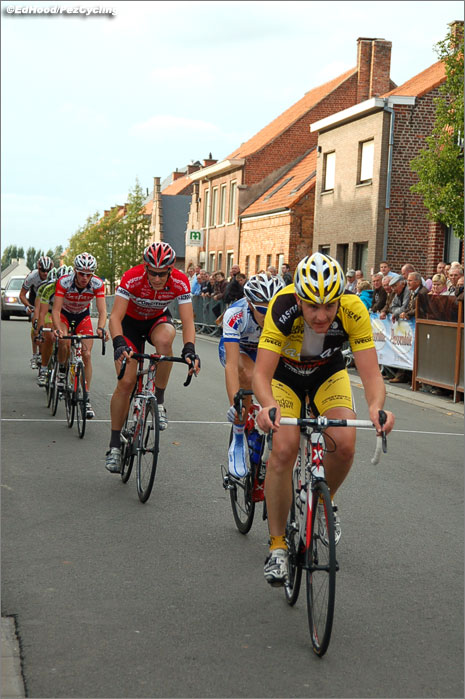 The chasers hurtle round the corner by the church for the last time before they’re pulled out – and then it’s down to the seven leaders. 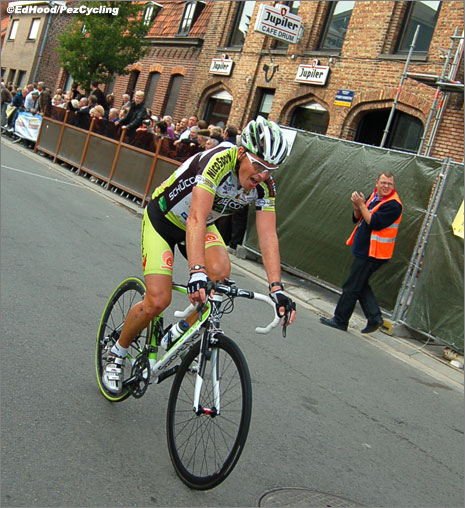 De Weirdt is too quick for Clinton and takes the win. 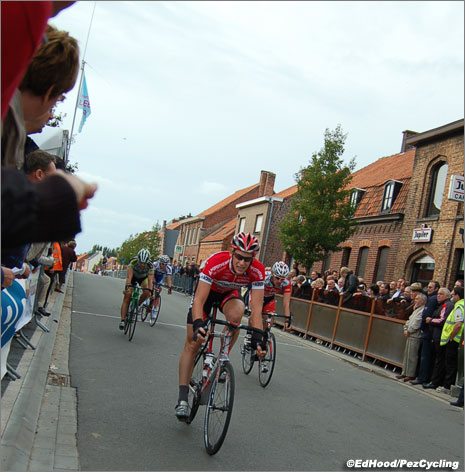 But the big Kiwi is well in the money with second – his name here is; ‘Avoree Cleenton!’ 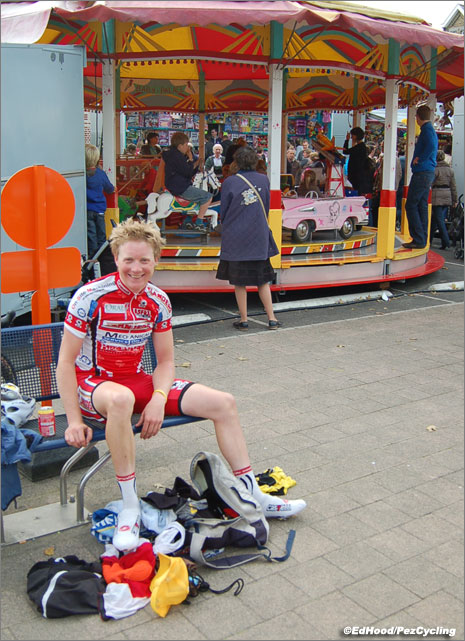 Dan looked tired at the end and supporter Dina had to tell him not to risk changing on a bench on the square – the commissaires will fine riders if there’s too much on display. 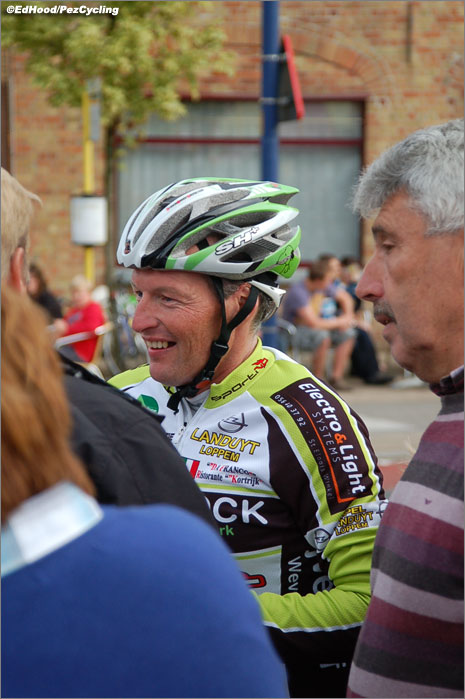 Meanwhile, De Weirdt tells the tale to his supporters. 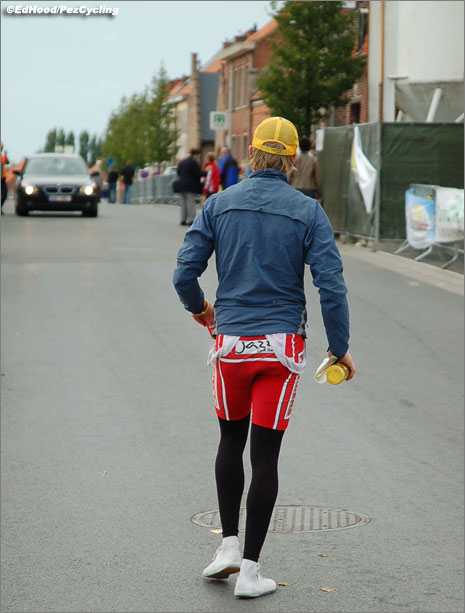 Dan ambles off in search of his five Euro number deposit and 20 Euro prize for a place in the 20’s.

We pack his Flanders machine into the Fiesta for the drive back to Oudenaarde – but Dan had his lights in his bag just in case he had to ride back.

On the way home, Dan tells us he loves the lifestyle in Flanders and will be back next year for more. 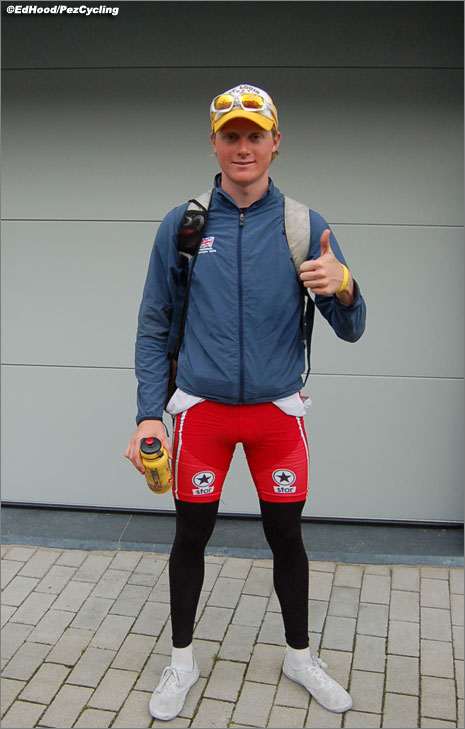 Back in Oudenaarde we drop him off – just another day at the office for Mr. Patten.