Race Report: On a day when we waited, waited & waited some more for the big guns to make their move it came down to the man that had won here before to show the others how to ride the Cauberg and take the win in the Amstel Gold.

A Different Type of Classic, a Different Type of Rider
After the grueling, ‘who can survive the longest’, type of racing that we saw at De Ronde and Roubaix, we now moved into the Ardennes races which require a whole different style of riding. We saw the men from the Iberian Peninsula coming north and several of them had high ambitions for this race; Joaquim Rodriguez (Katusha) has targeted Liege-Bastogne-Liege as the main race for his early season, Alejandro Valverde (Movistar) has been riding like a man possessed this year and wanted to go one better than his second place of last year’s edition and World Champion Rui Costa (Lampre) wanted to get his maiden win in the rainbow stripes. But as Ed pointed out in his preview history was against Valverde and Rodriguez with no Spaniard ever winning this race.

Onto the Action
With the first climbs coming soon after the start of the race all of the teams were interested in having a man in the break that would surely form. Eventually, after several escape attempts, a 10-man group went up the road and built a lead that stretched out to over 14 minutes at one point. The group contained Pim Ligthart (Lotto-Belisol), Pirmin Lang (IAM Cycling), Alexey Lutsenko (Astana), Nicola Boem (Bardiani-CSF), James Van Landschoot (Wanty-Groupe Gobert), Manuel Belletti (Androni Giocattoli), Preben Van Hecke (Topsport Vlaanderen), Matej Mohoric (Cannondale), Christophe Riblon (AG2R La Mondiale) and Rory Sutherland (Tinkoff-Saxo). 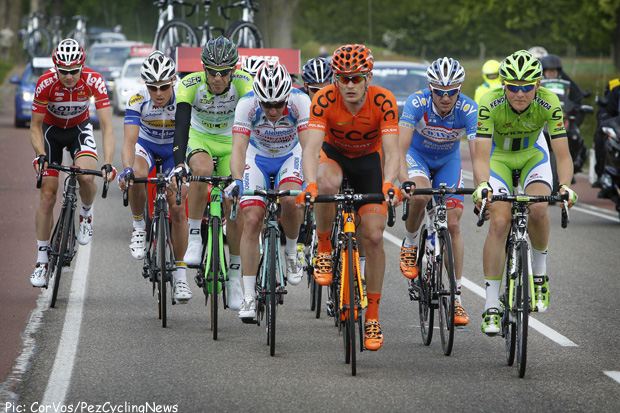 The break starts their long day out front

First ascent of four of the famous Cauberg and Omega Pharma and Katusha decided to lend a hand to BMC who had been controlling the speed of the peloton. This had the effect of reducing the gap to a more manageable 12 minutes. However, the first big upset of the day happened with just over 160 km of the race still to go. Joaquim Rodriguez was involved in a crash and for the second year in a row was forced to abandon the race. The extend of his injuries was not immediately clear so we’ll have to wait to find out if his participation in Liege-Bastogne-Liege is in jeopardy. He was not the only one to hit the ground as Andy Schleck (Trek) and Nicki Sorensen (Tinkoff-Saxo) also came down on the Schweiberg. While Schleck was able to remount and get back into the main bunch it was race-over for Sorensen.

All of this had the effect of seeing an increase in pace in the bunch and by the time the 11th climb of the day, the Camerig, was dealt with the gap was down to 11 minutes.

Past the Midpoint
The breakaway group continued to work well as they tackled climb after climb but their lead began to be eroded in the traditional manner. By the time they had reached the 16th climb of the day, the Gulpenerberg, and with less than 120 km remaining, the gap stood at 10:20 and was steadily falling. News reached us that Andy Schleck had abandoned, thought to have been involved in the same crash that forced Rodriguez out. Katusha’s Press Officer, Freddie Maertens, ‘tweeted’ that Rodriguez was dazed in the crash and it was thought too dangerous to allow him to continue. Other abandons were Thomas Dekker (Garmin Sharp), Arnaud Courteille (FDJ) and Aleksejs Saramotins (IAM Cycling).

The teams with serious ambitions were now beginning to make the others aware of their presence. Movistar joined the chase at the head of the peloton and the gap was now down to just over 9 minutes. Traditionally, the action hots up in the last 35-40 km of the race so the teams were concentrating on bringing everything together for about that point. 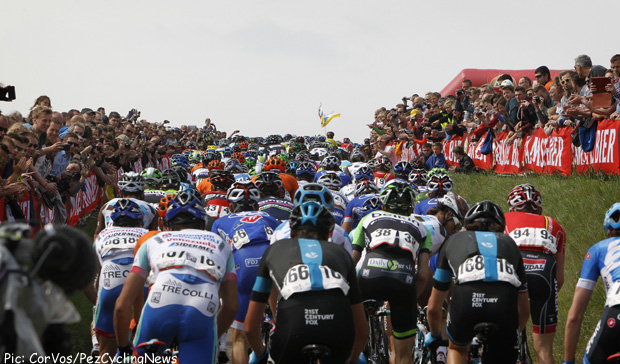 Into the Final 100
With less than 100 km to the finish in Valkenburg the break was now sitting at just over 8 minutes so everything was going to plan for the race. The riders were enjoying mild conditions but, as ever, there was a crosswind to contend with. With the finish now 1.8 km beyond the summit of the final ascent of the Cauberg it could open up chances for the more tactically minded riders who may choose to gauge their effort on the final climb.

Orica-GreenEdge also moved to the front of the peloton, thinking about their man Simon Gerrans. A crash in the main bunch saw the peloton split into two but as they all came back together the jerseys of Astana also added their weight to the chase, this time to support Nibali. Up front, the break now had 88 km to go and 12 of the original 34 climbs left to tackle. With a lead of just over 7 minutes, and an accelerating peloton, it didn’t look as if it would last to the finish.

The crowds had turned out today and as the bunch came up the Cauberg for the second time they faced a wall of noise. We’re certainly having a glorious Classics campaign this year and the fans have turned out to show their appreciation.

Towards the Bremelerberg and the lead was down to just over 6 minutes with two more abandons from the main field, thought to be crash-related. Dan Martin (Garmin-Sharp) and Haimar Zubeldia (Trek) had called it a day.

Renners to the Fore
With 68 km to race, the big teams were all sending riders to the front of the main bunch. Omega Pharma was showing for their big favorite of the day, Michal Kwiatkowski. Tinkoff-Saxo was also sending riders to work on behalf of Roman Kreuziger. As the bunch climbed the Loorberg with 54 km remaining Omega Pharma was setting the pace. All of the main contenders were keen to get a good position as the road was exposed to the wind over the top. The World Champion Rui Costa (Lampre) also showed himself for the first time today.

Over the top, and with just over 3:20 to the break, Tony Martin (OPQS) was driving what was left of the peloton, possibly hoping to split the group in the crosswind.

Inside the Final 50
The break was now on the Gulpenerberg and, with a lead just over 3 minutes Nicola Boem made a move on the climb but was quickly chased down by his rapidly tiring colleagues. In the peloton, the change in pace caused by Omega Pharma meant that all of the other teams were reacting in order to get their ‘favored’ men into place.

Boem’s acceleration had caused a split in the break and they were now down to six riders with the others rapidly losing ground and soon to be absorbed by a fast moving bunch. The peloton, however, was not without its own problems as the infamous road furniture caused Tony Martin to be forced off the road into a hedge. Unhurt, but with a slow bike change, he would struggle to contribute further to OPQS’s race challenge.

With the bunch on the Kruisberg, Belkin was now showing its hand. The lead group had reached the Eyserbosweg but was being chased by a small group of six riders who had broken clear of the bunch, led by Thomas Voeckler (Europcar). He had Zdenek Stybar (OPQS), Jackob Fuglsang (Astana), Pieter Weening (Orica-GreenEdge), Tim Wellens (Lotto-Belisol) and Greg Van Avermaet (BMC) for company. This was a serious group as it contained men from most of the strong teams. It put the onus on Movistar and Tinkoff-Saxo if they wanted to control the race for Valverde and Kreuziger.

The lead group was now down to three riders; Boem, Van Hecke and Riblon but attention was focused on the Voeckler group that had about 30 seconds over the peloton and was just over 2 minutes behind the lead trio. Voeckler pushed again on the Fromberg as Boem lost contact at the front but it was questionable that the main race would be satisfied to let the chasing group fight out the race.

Scramble to Cross the Gap
With the two leaders giving it everything, and the Voeckler group doing likewise, riders were firing out of the main bunch in an attempt to get across. Alexandr Kolobnev (Katusha) made a move on the Keutenberg aided by Paul Martens (Belkin) and Bjorn Leukemans (Wanty-Groupe Gobert) and they were soon across to the chasing group. Next to make a move was Vincenzo Nibali (Astana) himself who stretched his legs in an attempt to cross the gap but the attentive bunch soon denied that move.

Onto the Cauberg for the second last time and Riblon and Van Hecke had 1:36 over the Voeckler group and 2:14 over the bunch.

Waiting, Waiting, Waiting
Without a man in the chase group, Movistar and Omega Pharma (Stybar having dropped away) were moving men to the front of the bunch but everyone was playing a waiting game, all watching each other to see when the move would be made and by whom.

Just as the chase group was about to be picked up by a rapidly closing bunch, Pieter Weening countered but it came to nothing as they dangled just off the front of the peloton. The two leaders now had only 45 seconds advantage but it surely wouldn’t last.

The bunch was just controlling their effort as Fuglsang and Greg Van Avermaet tried desperately to cross to the two leaders but with everyone within 60 seconds of each other we were just waiting for the explosion to go off.

Inside of 10
The two chasers bridged the gap with 9 km to race but they were only 15 seconds ahead of the bunch so it was going to come down to a thrilling finale. Up the Bemelerberg and the four were joined but Van Avermaet tried once again to get away. He was quickly caught as different teams tried to take up the running and everything was back together with 7 km to race.

Orica-GreenEdge was dragging the field towards the final climb of the Cauberg so it was going to come down to who had the strength and the best tactics on the final ascent.

The Cauberg Lives Up to the Hype
Onto the Cauberg and Kwiatkowski made his move but the attack came from BMC, this time from Samuel Sánchez. He was quickly chased by Gerrans and Valverde but just as he was caught and swung over, the winning move was made by the man who knows this climb better than any other. 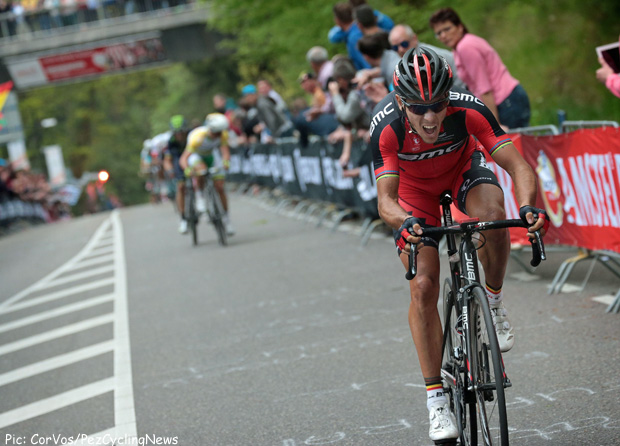 Philippe Gilbert (BMC) attacked on the other side of the road, pushing a huge gear and quickly began to open the gap. Valverde could see the victory riding away from him but he was locked together with Gerrans and Kwiatkowski and they couldn’t close the gap. Over the summit and with 1.8 km to go Gilbert continued to push and despite Kwiatkowski trying to hunt him down he quickly covered the remaining distance and with 400 meters to go, he knew he had taken the win for the third time.

This was a slow burner of a race with the fuse finally igniting on the last climb but it was a race that BMC read supremely well. With the ever-aggressive Greg Van Avermaet making the initial move it was a pleasure to see Samuel Sánchez make the first attack on the Cauberg. Gilbert played it perfectly and attacked in a way that we were once used to seeing him do. This time he followed it through and took a well-deserved victory. 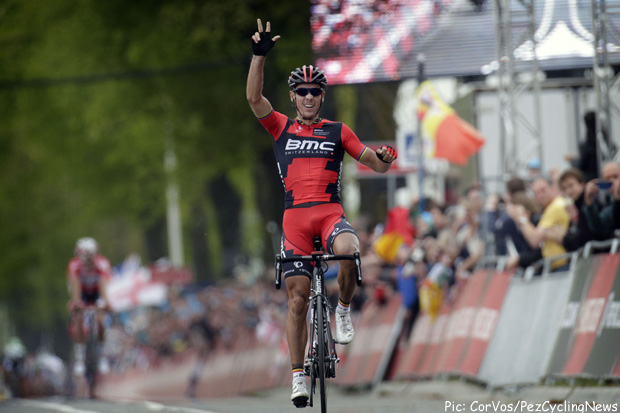 There will be a few Amstels consumed tonight in the BMC hotel. Well done Philippe!