The team time trial set up some surprises as the Giro d’Italia’s opener, but the efforts required over shorter distances called for different strategies than you might expect. CTS’s Jim Rutberg explains…

A year after the rainiest/snowiest Giro d’Italia in recent memory, I’m sure everyone was hoping for a beautiful, sunny evening for the opening team time trial stage of the 2014 edition. But when you choose Northern Ireland as the non-Italian starting point of the Giro d’Italia, it shouldn’t be too surprising to be racing in the rain once again. 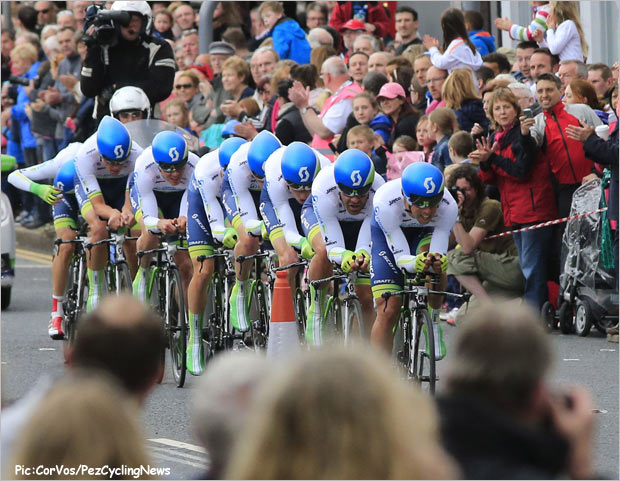 Off To A Green Start
The rain – particularly the timing of the rainstorm – had a significant impact on the results of Stage 1. Orica-Greenedge came into the Giro d’Italia with its eyes set firmly on the team time trial. They don’t have a true contender for the pink jersey on the squad, and they are a tremendous team time trial squad, and an opening-day TTT gives the team the opportunity to claim the pink jersey and potentially hold on to it for a few days. They were already a favorite to win today’s stage, and the fact they started before the rain started falling added to their advantage.

At the other end of the starting grid, the final five teams that started after the rain had stopped (or at least was tailing off), benefitted from drying roads and were able to minimize weather-related time losses to Orica-Greenedge. Omega Pharma Quickstep finished second at 5 seconds and BMC followed a further 2 seconds back, and both of them rode over drying roads and not in the worst of the rain. Thanks to a great team effort and a fortunate start time, Orica Greenedge earned the stage win and the first pink jersey. It was great to see Canadian Svein Tuft pull on the pink leader’s jersey, on his birthday. His story is one of the most interesting in pro cycling, as you can read here, and here, and here. 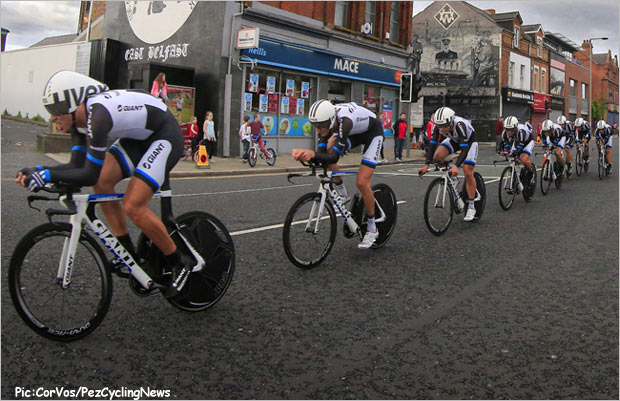 Long vs. Short Team Time Trials
One of the most interesting aspects of the Stage 1 Team Time Trial was how many teams shed riders during a relatively short effort. The strategy for a long team time trial (50-60km) is different than for a short one (less than 30km).

In a long TTT, it’s more important to keep the whole team together for a longer portion of the stage. First of all, dropping riders increases the workload that the remaining riders have to contribute to the team’s effort. And the longer that the remaining riders have to shoulder that extra load, the slower the team will go and the more fatigue they will accumulate. But the story is even worse for the dropped rider(s). In a long TTT the chances of a single dropped rider finishing outside the time cut are significant, and the effort required to avoid being eliminated is extreme.

Knowing how valuable it can be to keep the team together, it may have seemed odd to see riders drop off the back of their team trains during today’s 21.7-kilometer race. What was telling, however, was that you could see some them simply sit up, job done, to pedal to the finish.

In short team time trials it is absolutely essential to keep the speed as high as possible, so one strategy is to put your strongest workhorses on the front for massive pulls, knowing full well they’ll get dropped before the finish. But since the effort is relatively short, you can calculate how far into the stage these selfless workers have to get before they drop off the back of the team. The team benefits most by their extreme efforts early on, and once past the “safety point”, they can sit up and ride to the finish well within the elimination cutoff.

The Situation After Stage 1
Cadel Evans (BMC) and Rigoberto Uran (Omega-Pharma – Quickstep) are the best-placed of the overall contenders, and while there’s more than 99% of the race still to go, there’s never any downside to gaining time over your rivals. The most unfortunate rider on the day was Daniel Martin’s (Garmin Sharp). It was heartbreaking to see the Irish rider fall – and take down four teammates – on home soil, especially less than two weeks after crashing in the final turn of Liege-Bastogne-Liege when he looked like he was on his way to victory. Apparently when an Italian race travels to Northern Ireland, the ‘Luck of the Irish’ swings the way of a Canadian riding for an Australian team.

Jim Rutberg is a Pro Coach for CTS and co-author of seven books on training and sports nutrition, including “The Time-Crunched Cyclist”. During the Giro d’Italia he will be providing commentary and analysis of key stages, with an eye toward explaining why or how the action happened and what it means for future stages. For information on personal coaching and training camps from CTS, visit https://trainright.com.
Like PEZ? Why not subscribe to our weekly newsletter to receive updates and reminders on what's cool in road cycling?