Photo Report: The Tour of California kicked off on Sunday in Sacramento and PEZ’s ace photographer Darrell Parks was there to cover all the action and superb scenery. The stage came down to a bunch kick and the tightest winning margin ever in the race’s history where even the winner wasn’t sure that he’d won!

SACRAMENTO (May 11, 2014) – The 2014 Amgen Tour of California began and ended a historic first day of racing at the foot of the State Capitol building in Sacramento, with Omega Pharma – Quick-Step Cycling Team’s Mark Cavendish (GBR), the victor in what was the closest finish in the event’s nine years. 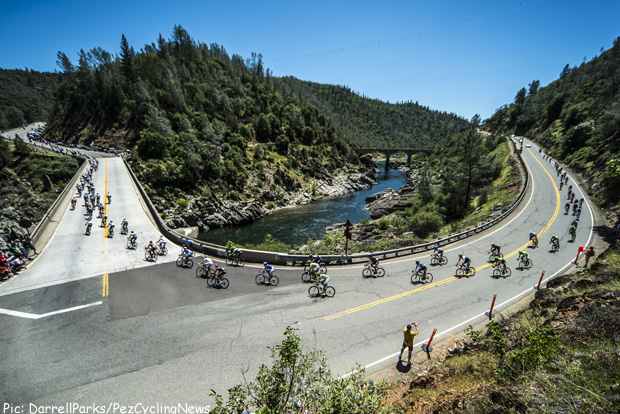 In the longest race day (120 miles) this year (with seven days yet to come) and a finish designed to favor sprinters, the 128 cyclists in the ninth annual race, May 11-18, ended the Stage 1, with three two-mile laps around the State Capitol building. Prior Amgen Tour of California finishes in Sacramento have been some of the most memorable, and 2014 was another one for the history books, with the most accomplished pack of sprinters in race history vying for the first stage win to the cheers of several people-deep crowds.

The final circuit saw Omega Pharma – Quick-Step Cycling Team and Team Giant-Shimano battling for control and position to propel their sprinters to victory. In a thrilling photo finish, Cavendish (GBR), the 2012 World Champion who also holds the third most Tour de France stage wins, came blazing from behind in the very final meters to lunge over the finish line just a tire rim past Team Giant-Shimano’s John Degenkolb (GER). With Cavendish donning the Amgen Race Leader Jersey following his fourth career Amgen Tour of California stage win, Degenkolb’s second place finish will put him in the Visit California Sprint Jersey tomorrow. Belkin-Pro Cycling Team’s Moreno Hofland (NED) rode through the line fractions of a second behind the two leaders to claim third place. 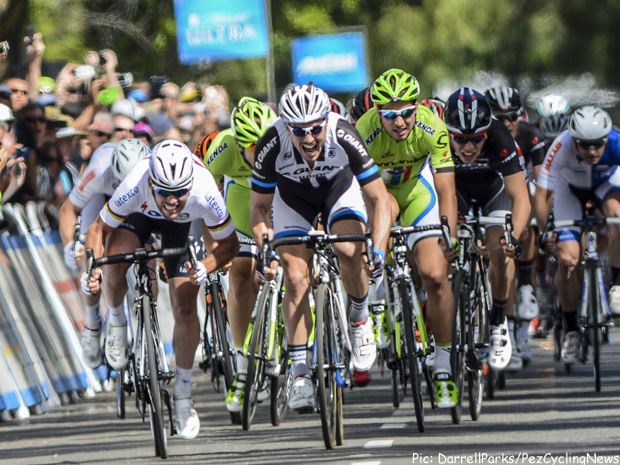 “I’ve won a sprint by 10 cm before, and I’ve lost a sprint by 3 [cm], and both of them I knew the outcome. That was the first time in my career I really had no idea who’d won…I’m super happy,” said Cavendish of his seventh win of 2014. 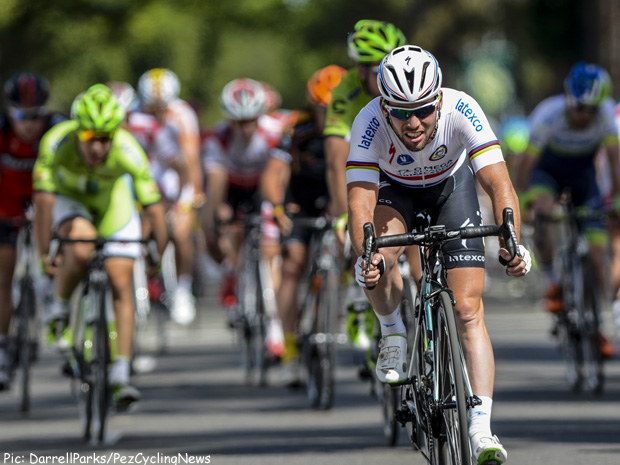 With 128 of the world’s elite cyclists (16 teams) all vying for an early hold on the race, an early breakaway of six riders included the peloton’s youngest member, 19-year old Tao Geoghegan Hart (GBR) of the Bissell Development Team, who was awarded today’s Crunchies Best Young Rider jersey for his efforts. They held the gap, which was more than five minutes at times, until about 30 miles to go when Team Sky began to control the tempo of the peloton and Cavendish’s Team Omega Pharma-Quick-Step, which helped close down the breakaway. 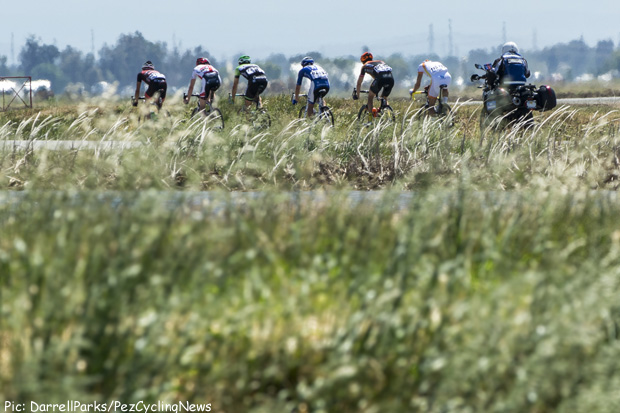 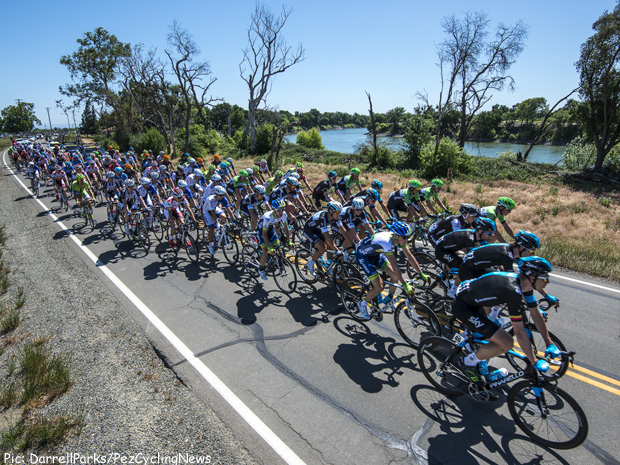 From there, a flat section of farmland saw 15 leaders at the front of the pack, many of whom retired back into the peloton after battling the heavy crosswinds. Coming into downtown Sacramento, three leaders held a :10 advantage over the peloton going into three 2-mile circuits lined with thousands of screaming spectators. UnitedHealthcare Pro Cycling Team’s Kiel Reijnen (USA) held onto a 20-second advantage until the final lap. In the second circuit the green train of Cannondale Pro Cycling could be seen forming in a bid to lead out their decorated sprinter Peter Sagan (SVK), who ultimately was swept up away in the final meters and ended the day in fourth place. 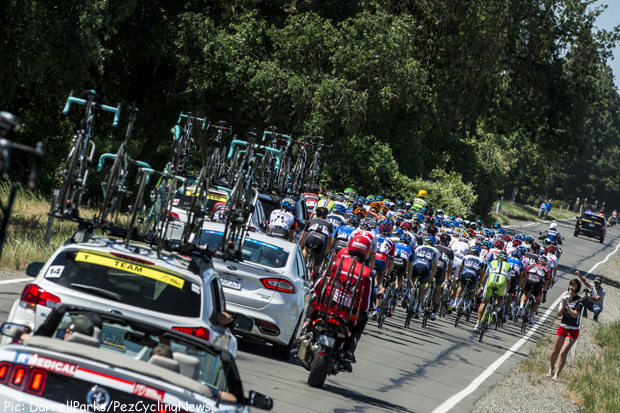 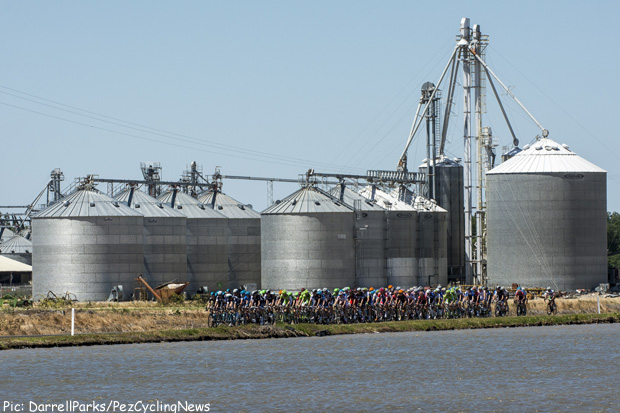 Other jerseys awarded today include: the Amgen Breakaway from Cancer® Most Courageous Rider Jersey to Team Novo Nordisk’s Charles Planet (FRA) and the Michelob Ultra King of the Mountain Jersey to Optum Pro Cycling p/b Kelly Benefit Strategies’ Will Routley (CAN). 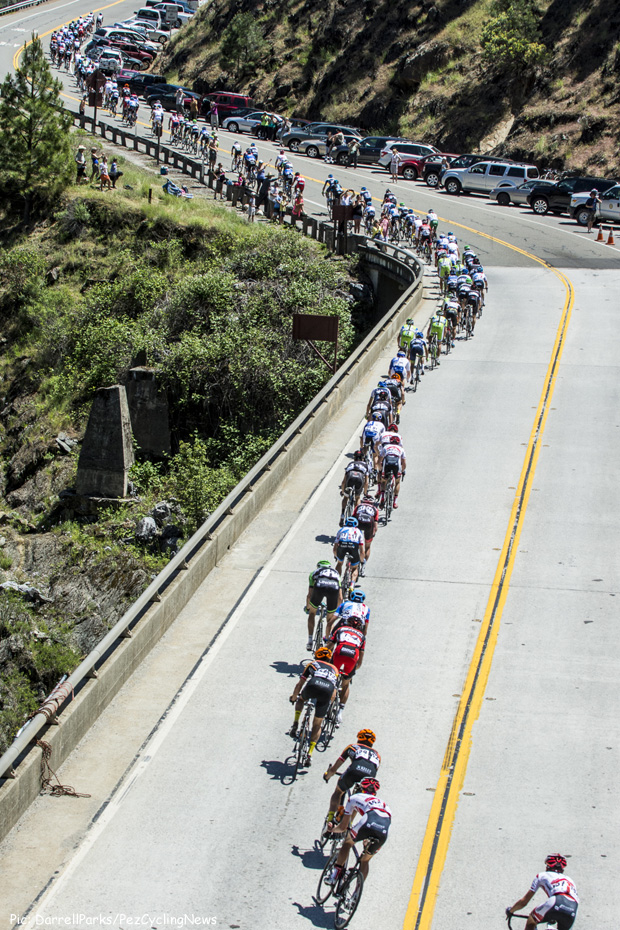 Stage 2 is the individual time trial event in Folsom. Before the men begin the stage, 20 top professional women time trialists will compete on the same course, the first time in Amgen Tour of California history that women will compete in two events. 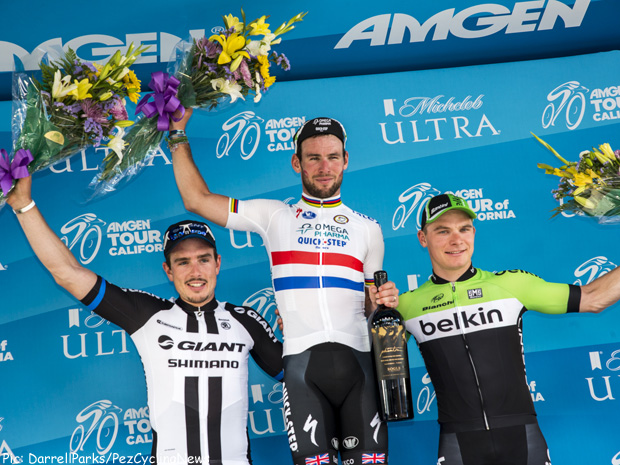 Following his win today, Cavendish earned a :04 win bonus over the field as well as the last start position in tomorrow’s time trial, a short, flat course that will reward the strongest rider and prove an honest test of who is riding well and who is not. Designed for speed, the 12.5-mile route will begin and finish in Folsom’s historic district. A start on Sutter Street will be followed by a turn onto Riley and a short downhill run onto the Rainbow Bridge and over the American River. The route will then turn north toward Folsom Lake. A right turn onto Folsom Lake Crossing will take the riders past the main entrance of California’s second oldest prison. A turn onto Green Valley will lead the riders to a 180-degree turn back over the same route to finish downtown. While there is a good chance Stage 2 will result in a new race leader, expect results to be close – no one can afford to lose time on this stage so early in the week.