Photo Report: Stage 4 saw some spectacular coastal scenery, an expected sprint stage turn out to be perfect for a break and Optum’s Will Routley experience a day that he will never ever forget. PEZ’s ace photographer Darrell Parks was on the scene to capture all the best images.

CAMBRIA, Calif. (May 14, 2014) – Will Routley of Optum Pro Cycling p/b Kelly Benefit Strategies, hit the trifecta during Stage 4 of the Amgen Tour of California Wednesday. The 30-year-old Canadian won the 102.6-mile stage along the Pacific Coast Highway from Monterey to Cambria, while also picking up Visit California Sprint jersey and Michelob Ultra King of the Mountain jersey. 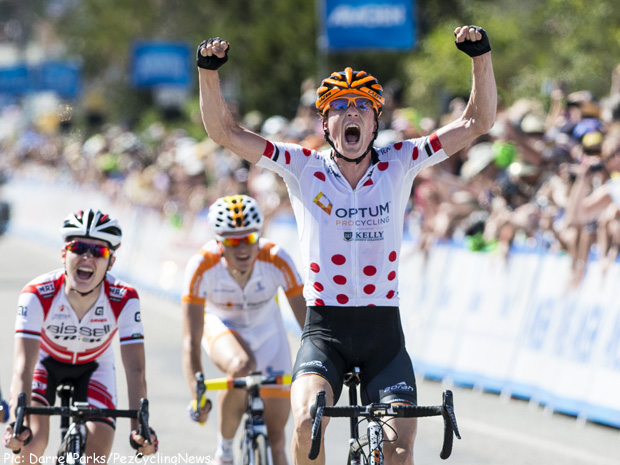 “Things worked out a little better than planned,” said Routley. “I’ve been feeling really good sprinting at the top of climbs the past three days. I came here to win a stage, that’s what I’ve wanted to do every time I’ve come to the Amgen Tour of California. I wasn’t expecting today was going to be that day. It’s a bit of dream right now.” 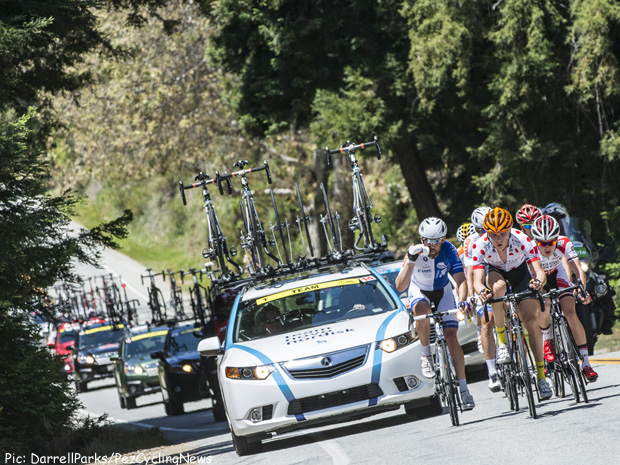 Stage 4 of the 2014 Amgen Tour of California was epic for the next generation of elite cyclists who at mile 10 staged an early breakaway. The breakaway group of six young riders representing several of the Continental teams in the race kept an unlikely lead for the remainder of the scenic stage all the way to the finish line with Routley achieving victory more than a minute ahead of some of the most accomplished teams and cyclists in the world.

Following a sprint among the group of six, Gregory Daniel (Bissell Development Team) finished the stage in second place and Kevin De Mesmaeker (Team Novo Nordisk), who was the first to attack with around 400 meters to go, placed third.

With a performance that will go down in Amgen Tour of California history, Routley swept all three of today’s KOMs as well as overtook the Points competition to claim the Visit California Sprint Leader Jersey from Mark Cavendish (GBR), who has worn it since his victory in Sunday’s first stage.

The six young cyclists, some of whom are racing in their first Amgen Tour of California, gave the fans awaiting the stage conclusion in downtown Cambria a surprise ending when their 93-mile breakaway held all the way to the finish line. In addition to Routley, who has been out front in the breakaway every road race day since the event began Sunday, the others included UnitedHealthcare Pro Cycling Team’s Jonathan Clarke (AUS) and Christopher Jones (USA); Team Novo Nordisk’s Kevin De Mesmaeker (BEL); Team Jamis-Hagens Berman p/b Sutter Home’s Matt Cooke (USA); and Bissell Development Team’s Gregory Daniel (USA), who at age 19 is the second youngest rider in the peloton. 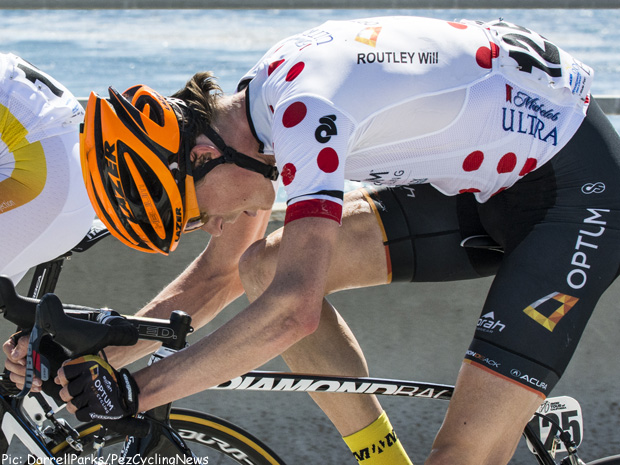 Presented by Visit California, Stage 4 sent the riders south on iconic Highway 1 from Monterey to Cambria, which joins the Amgen Tour of California as a first-time host this year. The teams anticipated the scenic day filled with rolling hills and ocean vistas would end in a bunch sprint, hotly contested by some of the world’s marquee-name sprinters. However, the cool coastal winds that may have felt refreshing in the hot Central California sun ultimately helped keep the peloton at bay as they toiled to gain time on the breakaway through crosswinds and tailwinds. 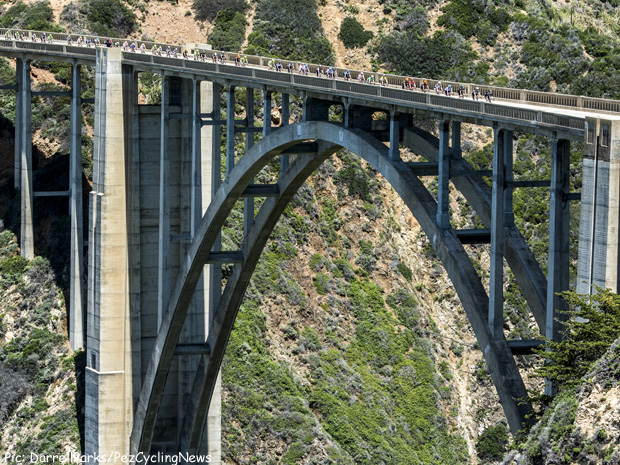 The peloton crosses the Bixby 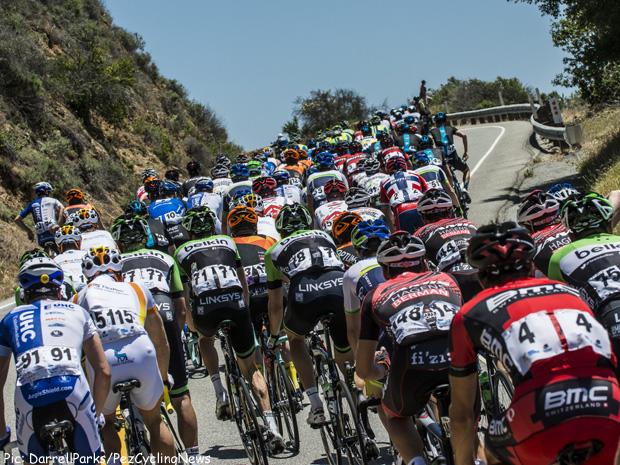 With Omega Pharma – Quick-Step Cycling Team and their decorated sprinter Cavendish at the head, the peloton filled with top-ranked Pro Teams and riders worked to close the gap in the final 10 miles, taking it down from more than three minutes to less than two. But they ultimately were unable to overtake the six young speedsters and crossed the finish 1:17 behind the stage winner. 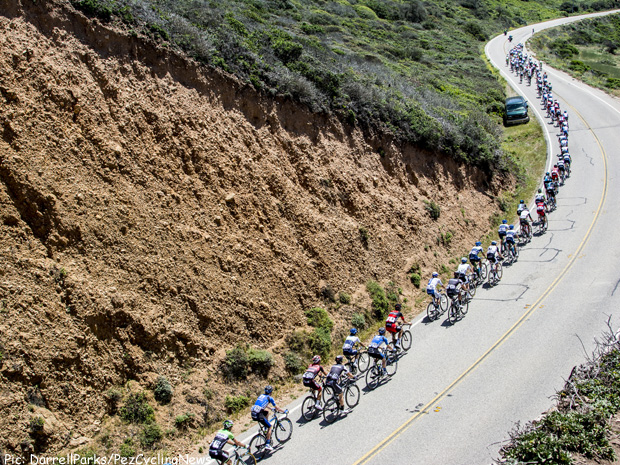 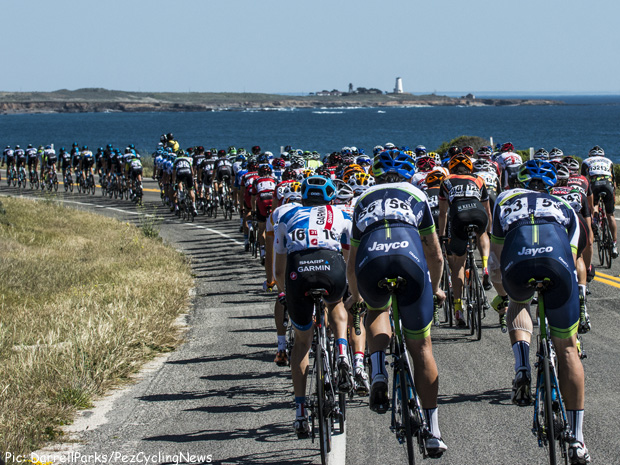 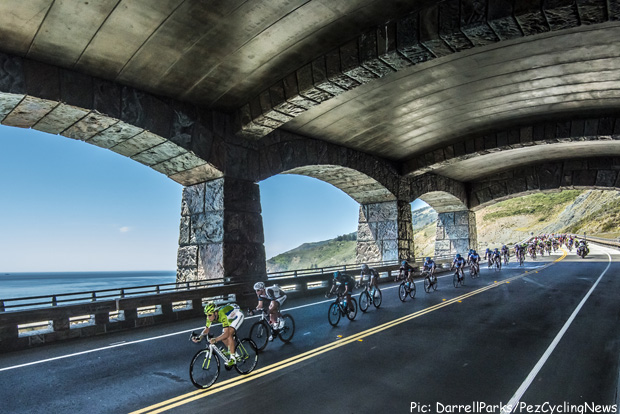 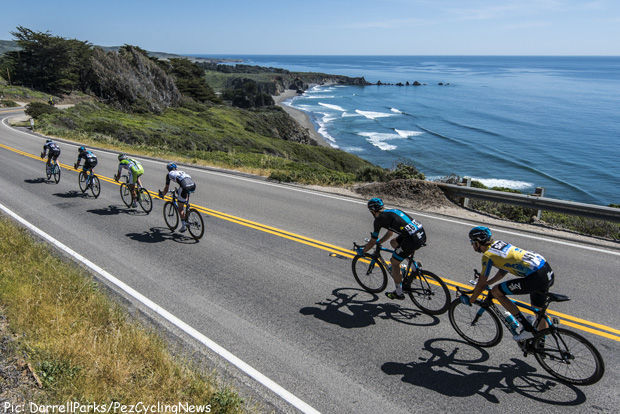 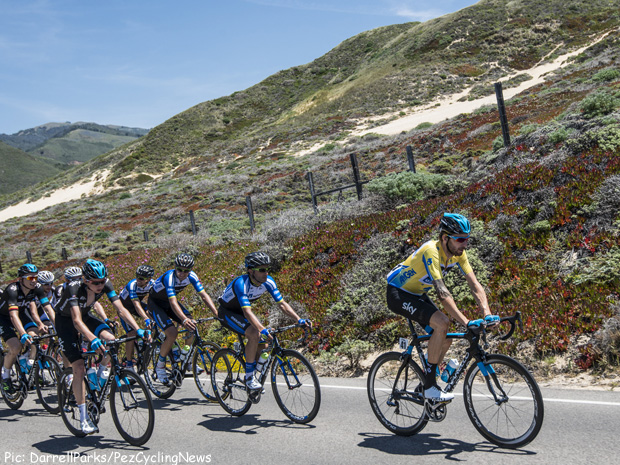 With the celebrated green jersey in Routley’s hands, the Michelob Ultra King of the Mountain Jersey transferred to another member of today’s breakaway, Jonathan Clarke, while Christopher Jones was awarded the Amgen Breakaway from Cancer® Most Courageous Rider Jersey. 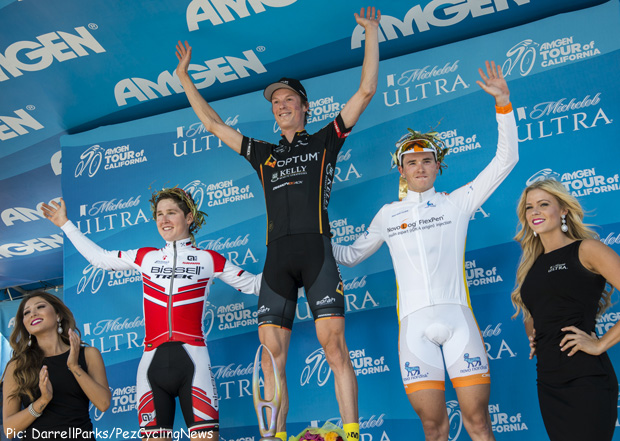