What do Axel Merckx, Alex Steida, Trevor Linden, Ross Rebagliatti, and Derek Porter have in common? Bike racing, more specifically cycling in support of the BC Cancer Foundation. These world class athletes were on hand to support this years Westside Cycling Classic on the streets of Point Grey Village in Vancouver last weekend.

Before the celebrities and fundraisers took to the 12km loop around the majestic Pacific Spirit Park we had the battle for the 2008 BC Road Race Championships. 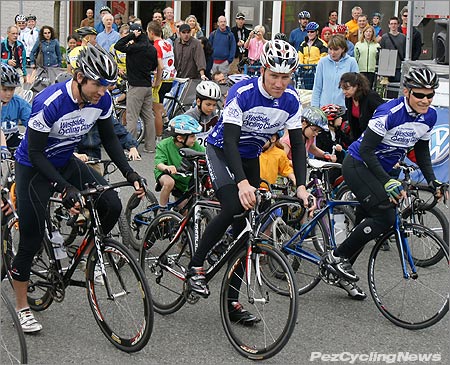 In spite of some great racing, the kids race led out by hometown hockey hero Trevor Linden, Axel Merckx and Olympic gold medalist (snowboarding) Ross Rebagliatti got the most laughs.

First to fight for the jersey were the Elite Women. A strong field was staged to ride 84km over a closed 12km loop finishing with a slight uphill on West 10th Ave. The first opportunity to collect some cash was the $100 first lap prime, which was handily taken by Team Giant Canada/Whistler Women rider Heather Lamson. With a strong balance of teams represented in the field the race stayed pretty tight through its’ entirety. 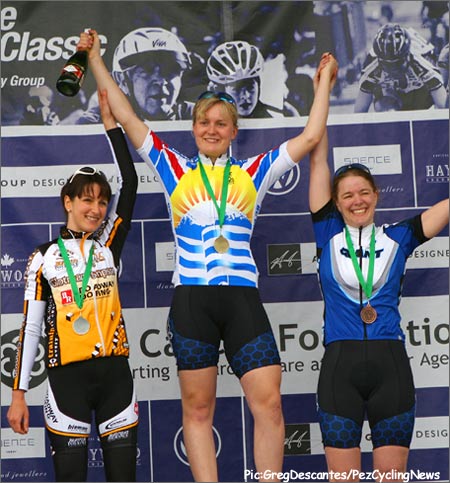 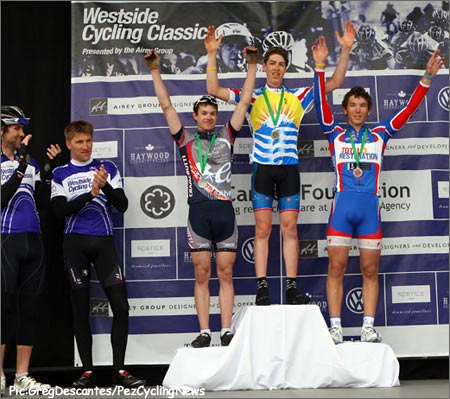 Next to settle their score were the Junior men. With their heros Axel Merckx and Alex Steida on hand, the young guys were anxious to say the least. Similar to the women’s race the boys kept things together with good teamwork. As the race wore on some confusion set in as the Elite break-away caught the Juniors just as the younger riders were hitting the finish. While they were certainly happy to be riding with the big boys it went almost unseen that Corey Hess from Team Aviawest had taken the win just ahead of Boris Martin – Campione/Ratcliff Cycling and third place finisher Evan Guthrie riding for Total Restoration Cycling.

The main event was a battle to the end…almost. A large field set out to cover the 140km course, which included 10 “short” loops for a grand finale. The race was on from the gun with Trevor Haaheim – Total Resortation Cycling Team taking an early flier and the first lap $100 prime. With more than a minute gap after the second lap it looked like Haaheim had more than the prime in mind and was perhaps trying get the Symmetrics boys working early to bring him back. His tactic worked and by the next lap the field was together again.

Barely a lap later and the race was over for all but 9 riders of which 5 were from Symmetrics Cycling Team. Christain Meir, Will Routley, defending BC Champ Ryan Anderson, Canadian Champ Cam Evans and strongman Svein Tuft were all up front towing along a few challengers. Jamie Sparling and Tyler Trace from Trek-Red Truck Ale Racing, Alistair Howard – Kona/Adobe and Tim Abercrombie – Escape Velocity were all just sitting on the back of the yellow express. Lap after lap it was clear that the winner would come from this group and while it was anyone’s guess who would win it was clear it was probably a yellow jersey – or red and white in the case of Evan’s National kit.

The Symmetrics riders methodically broke down their four companions with Tim Abercrombie suffering a poorly timed flat leading into the fast part of the route. Strongmen Evans and Tuft pulled away with Sparling to establish what would prove to be the winning move and after a valiant effort to answer attack after attack from his two Symmetrics companions Jamie Sparling finally blew and had to let them go. His next objective was to stay ahead of a 3 rider Symmetrics time trial squad of Routley, Meir and Anderson. The Trek-Red Truck Ale rider was a crowd favorite for his struggle to get a podium spot but even the cheers from adoring fans wasn’t enough to stave off the Symmetrics train and he settled for sixth ahead of his teammate Trace and Kona-Adobe’s Howard.

The final question was who would take the jersey Tuft or Evans? The two put on a great show for the crowd with a solid sprint up to the line and a smiling Tuft watched as his teammate Cam Evans took the 2008 BC Championship. Cristian Meir led his teammates Anderson and Routley across the line for a dominate sweep of the top five places. 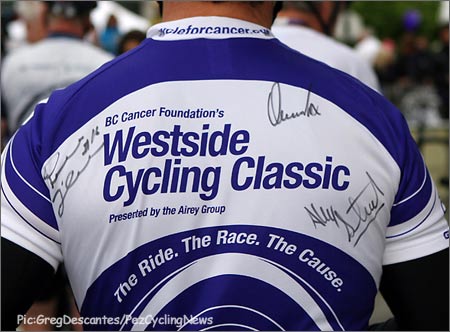 • Full results are posted at www.cycleforcancer.com.

• Thanks to Greg Descantes for the photos – see his work at
www.Descantes.com