Right now I’m in the traffic jam winding it’s way off the second last climb – the Cat 1 Col des Chevreres – we’re a good 1-2 hours away from the hotel & wifi, but I’ve already downloaded the photos and fired up the laptop, in hopes of getting this posted asap so I can get that elusive ‘dinner before 10:00′. 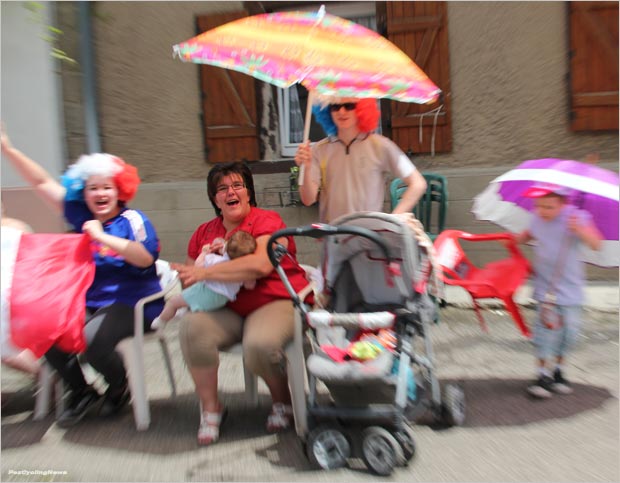 This French national holiday dawned dry, bright, and quiet for the much feared third day in the Vosges mountains – 170km from Mulhouse to the 20% final slopes of Les Planches des Belles Filles, going over 7 rated climbs with nary a flat section anywhere after km 30. We drove the course and if the heavy mid-day rains, Contador’s big crash and abandon aren’t proof enough, I can assure you that what we saw with our own eyes it was played out on one tough, tough parcours. 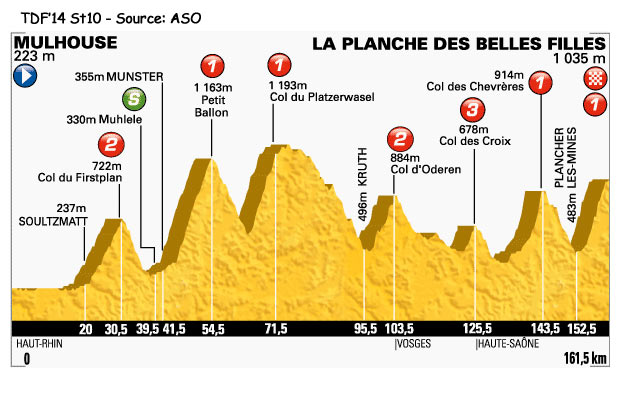 The plan was head to the start, which was only a couple kms from our hotel, but thanks to the deadly combo of one-way streets in Mulhouse, and rampant road closures due to the Tour, it took us a good 45 mins and a lot of circling the wagons and asking directions before we landed in the Tour car park. 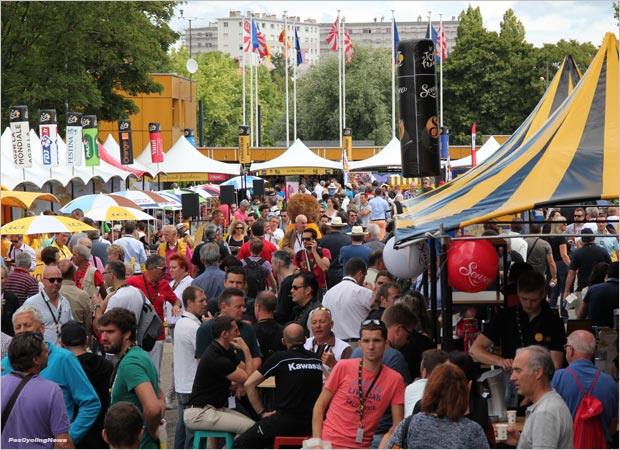 Roving through the village turned up a few gems: 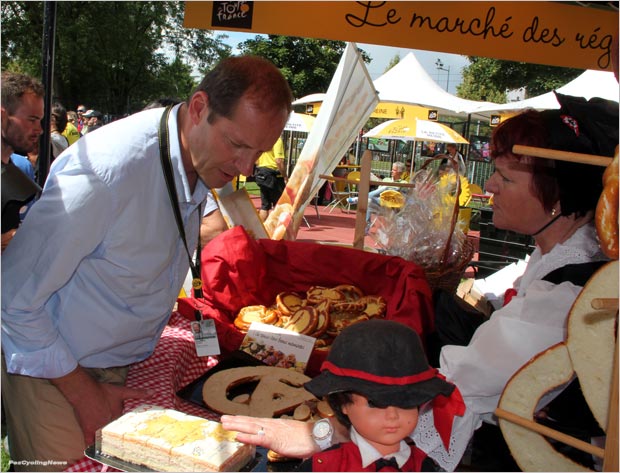 I met Christian Prudhomme this morning, and while I did tell him I don’t speak French – he carried on the conversation in French. The thrill of meeting the man who runs the world’s greatest race was only slighty dampened by my not understanding a word he said.

I was considering posing for my own gag shot on the ceremonial Tour Winner’s podium, when someone who’s got more cycling racing cred in her big toe than I’ll ever have, and an equally abundant sense of humor stepped up… 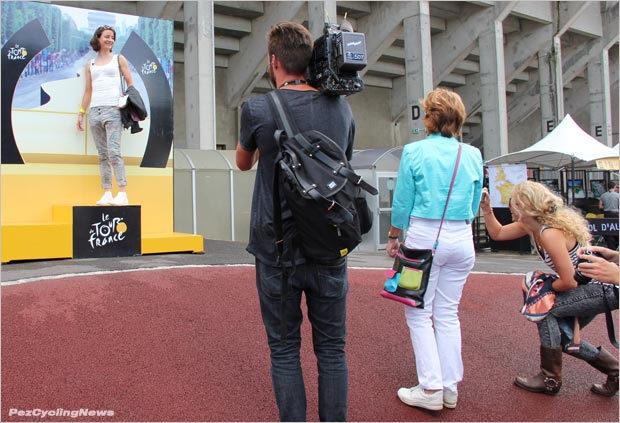 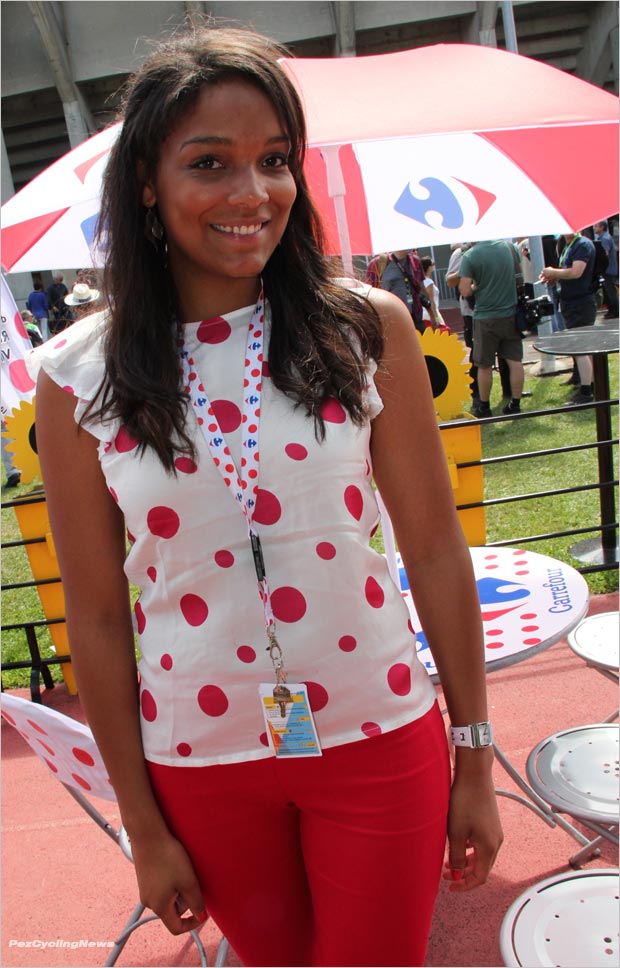 An Interview with a podium girl – stay tuned for that coming tomorrow. 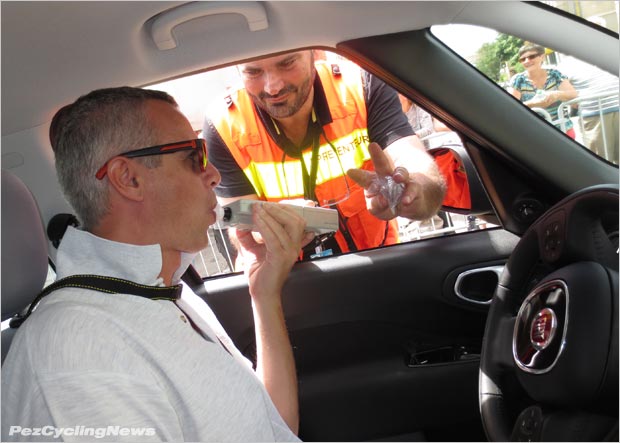 Driving the course on race day means no real plan is in place, but never to worry as any day here is chalk full o’ surprises and random access entertainment- like the breathalizer test leaving the parking lot.

But the day’s real treat was the 160 km of stage 10 that awaited our personal inspection from the press-stickered luxury of our Fiat – which judging by the number of “Ciao Italia’s” and various other Italian-slanted shouts, is a rare brand in these parts. 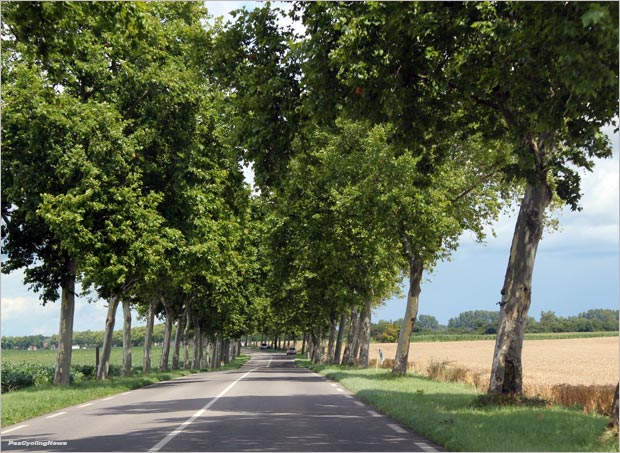 After a 15km neutral zone exiting the city, the course pointed northwest across the Alsace flatlands to the east of the Vosges mountains. Warm-up formalities quickly dispensed with, the seven rated climbs began at km 30 with a wooded warmup to the Col du Firstplan – 8.3km @ 5.3%. The fans were out in full force – this being Bastille Day and all, and right from km O it was all-fans all the way. 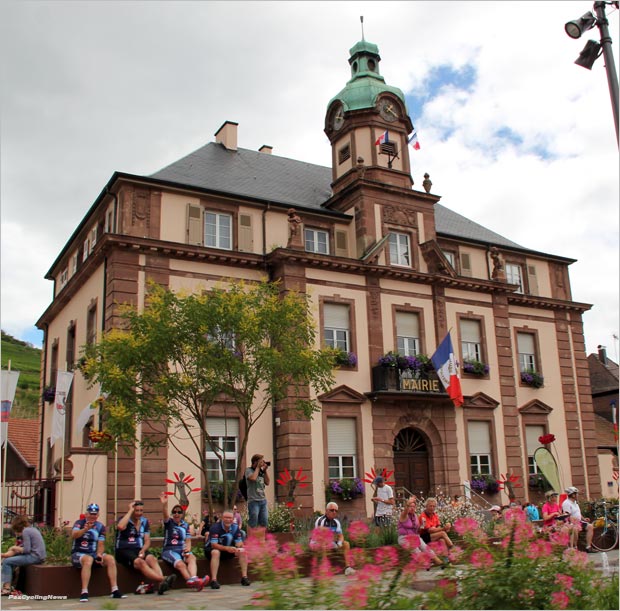 The day’s real uphill fun though came at km 54 on the 9.3km @ 8.1% Petit Ballon. This is one of the four ways up the Grand Ballon (I mentioned in yesterday’s Tour de PEZ report), but this one was ugly from the get go. A road of patched pots, unevenly sloped and narrow. And 9+ km of over 8% qualifies as steep in my book – and should in yours too. Somewhere towards the top the pavement smoothed out, but only in places. The descent is no better – and threat of rain would make this one dicey downhill. 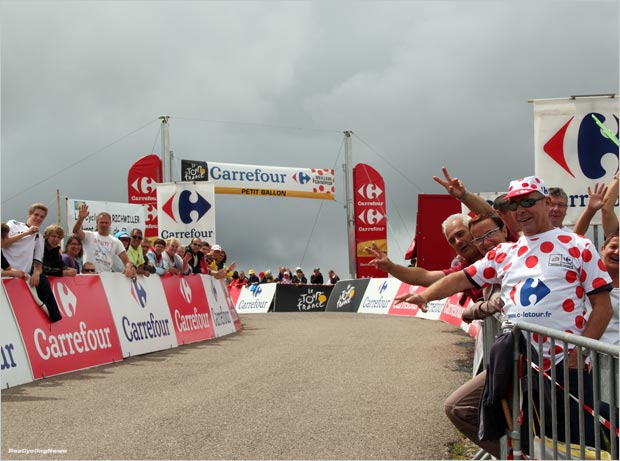 The thing about today’s route was almost a complete lack of flat between the climbs – as the third climb – the Cat 1 Col der Platzerwasel (7.1km & 8.4%) turned upwards immediately upon exiting the Petit Ballon descent. Another twisting turning affair, with a cool wind blowing in various directions made this one better saved for a sunny day – but that’s why pros get the big bucks to spend a day at the office in soaking wet lycra. 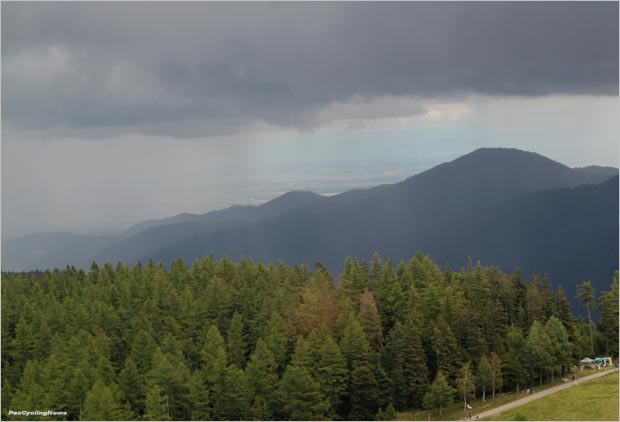 Somewhere in here the Vosges became shrouded in low wet clouds that soon began dripping the rain, and somewhere on the backside of this 20+ km decent is where Contador suffered his ‘grande chute’. 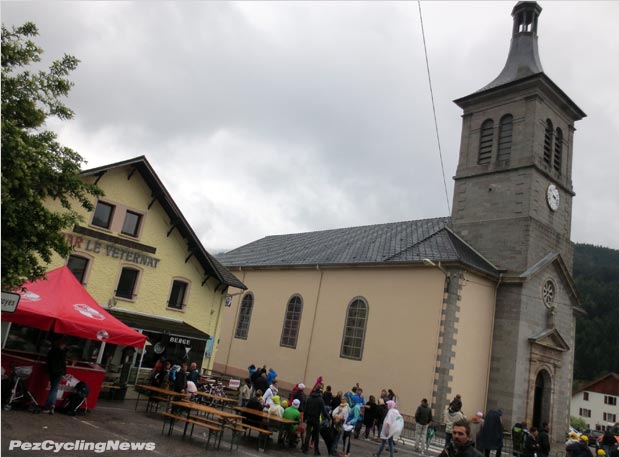 By odd coincidence, we’d just descended the climb #4 Col d’Oderen – the rain was still coming down and we’d decided a coffee was in order. The next town was Le Thillot at 120km, and the smoke filled main square was all the invitation we needed. Stepping into the local bar – we were pleased to see a jumbotron screen, then aghast at the scenes playing out before us, and thousands of fans around the world. 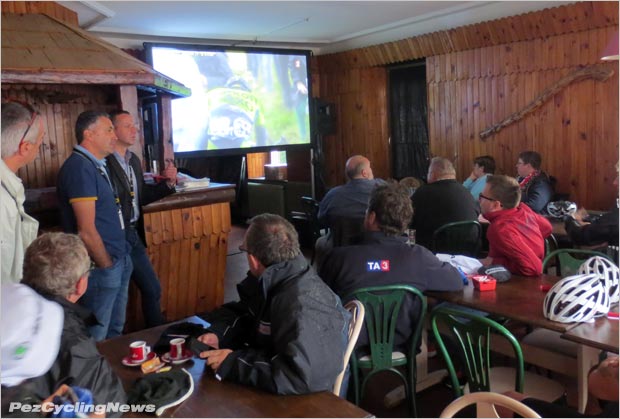 Alberto Contador covered in dirt, fresh Tour kit in tatters, bandages being wound around his knee – and was that blood staining the back of his jersey? But he was soon on his way as Bjarne Riis himself pushed Bert away. We only saw the aftermath, but it was clear this was a big hit. Watching him push off at 4 minutes behind the Nibali group, I thought about what a tough rider Contador is – in the body, head and heart – and if anyone could make up that time it was him. 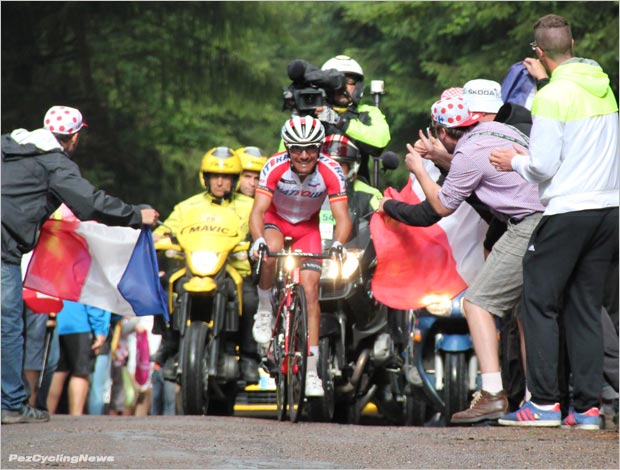 Rodriguez summits the Chevreres alone – and in the lead.

We pushed off towards the Cat. 3 Col des Croix – climb #5 at 125km, 3.2km long at 6% – then pressed onwards to the penultimate climb of the Col des Chevreres to catch the race pass, and join thousands of fans for some real roadside action. 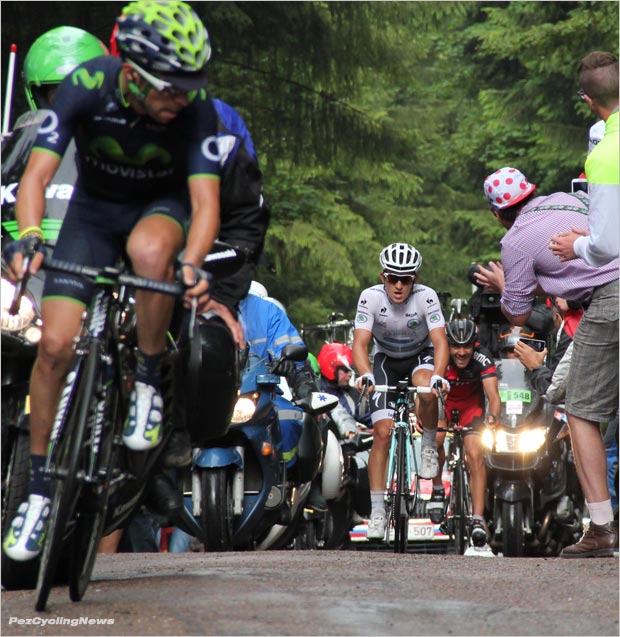 Parking our car just past the summit, we got the news of Contador’s abandon – and felt that sinking feeling as the race lost another great protagonist. 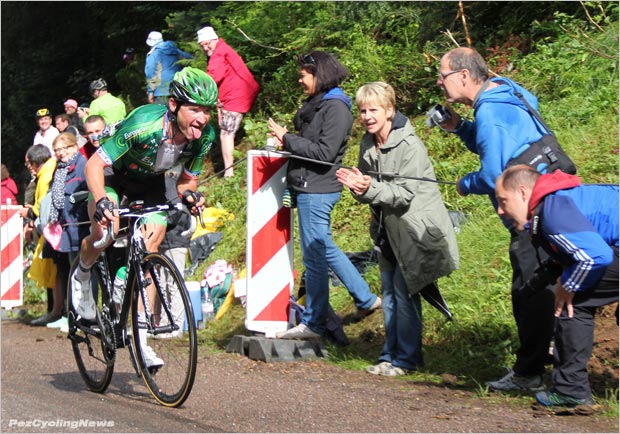 But as the show goes on, the approaching thumpa-thumpa of the tv helicopters got my adrenaline doing the same, and it was time to see what kind of race photos I’d capture in the next few minutes as the race reached the top. 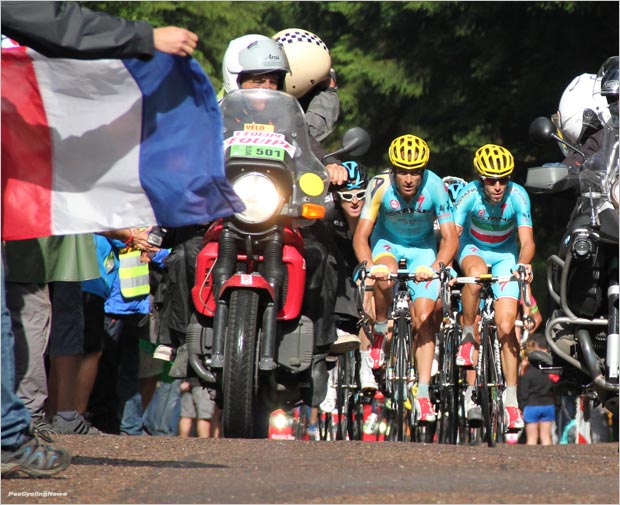 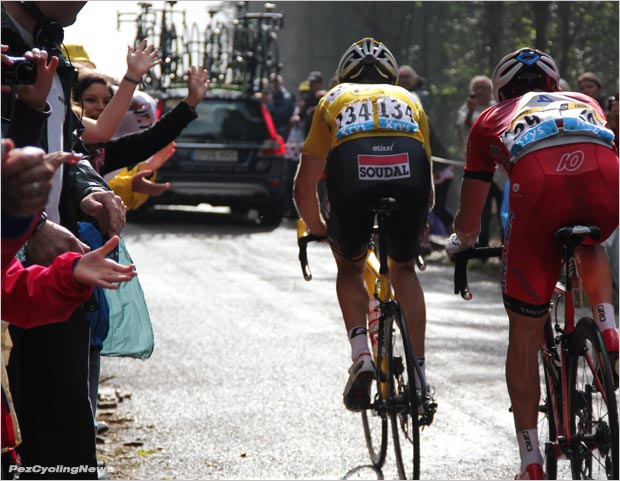 Tomorrow is Rest Day and I’ve got a special treat lined up – my interview with Ines – one of the lovely presenters of the KOM maillot pois – put that one in your day-timer. 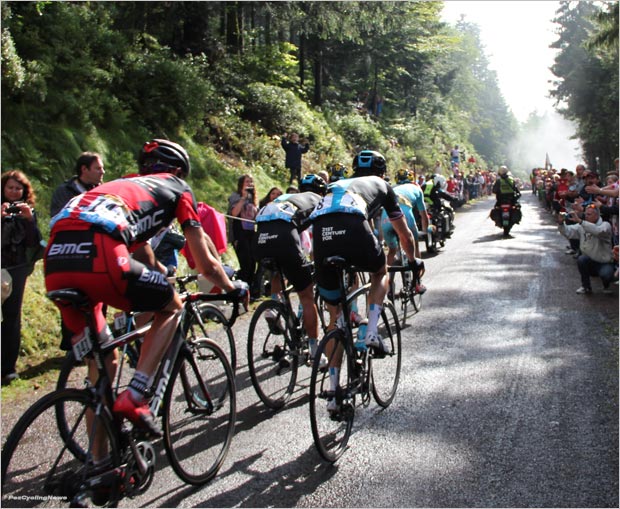 Thanks for reading and see you tomorrow- oh – and the sun has just come out as we clear the mountains and pick up the autoroute east to Mulhouse for the night – I’d say this Tour is really starting to shape up.
– Pez