Disc brakes, 11 speeds and custom carbon were the trends expected at Eurobike this year but you never know just what you’ll get until you walk through the doors of the massive salon in Germany. Here’s PEZ’s look at the best bikes that Eurobike had to offer.

In almost 10 years of working for PEZ this was actually my very first Eurobike and all that I had been told as pre-show advice was to take some good shoes. That I did and I’m thankful as with more than 100,000m² of the best that the bike industry has on offer I walked many miles on each of the three ‘trade only’ days I was there.

With so many beautiful parts, accessories and bikes on display, finding a place to start can be a bit daunting, so looking at just the bikes seemed like the most obvious, and easiest jumping off point. 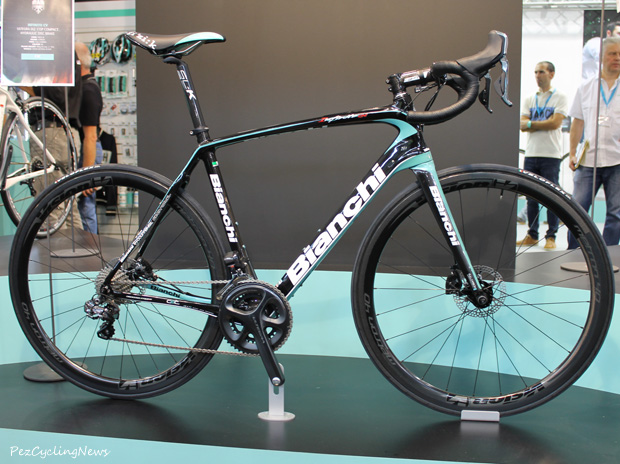 First stop was Bianchi who had this nice looking Infinito on display with full Ultegra groupset including their disc brakes matched with Vision wheels. 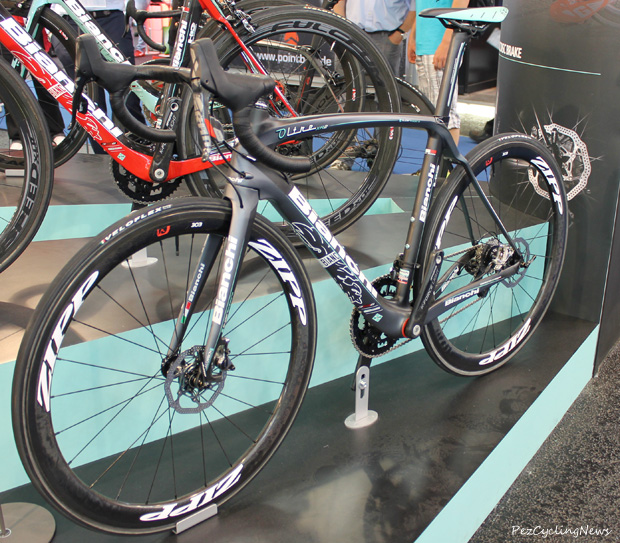 And they didn’t ignore SRAM fans either with this Oltre XR2 with the 11spd disc setup. 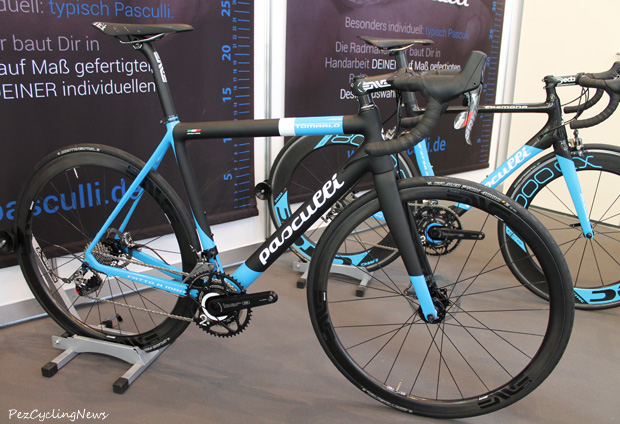 It wasn’t just the big brands who had gone disc crazy though, the little guys also had discs like this beautiful Tomaalo model from German manufacturer Pasculli. Pasculli make high end German designed, hand built in Italy and totally custom machines that were the logical step when two German friends, one a bike shop owner and one a famous musician in the Berlin Philharmonic orchestra got together over a wine in Italy… let’s build a bike company! 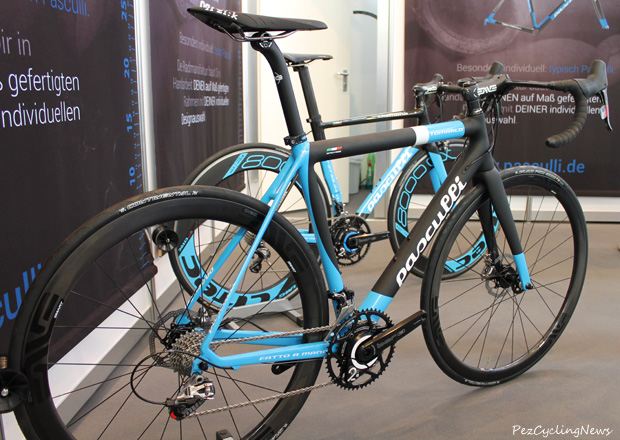 Going strong since 2005 the company has been growing steadily with emphasis placed on the engineering and finish of their bikes leading to some highly specialized and beautiful machines. This particular frameset comes in at a very light 824 grams (no fork) and is designed for use with all types of disc brakes. 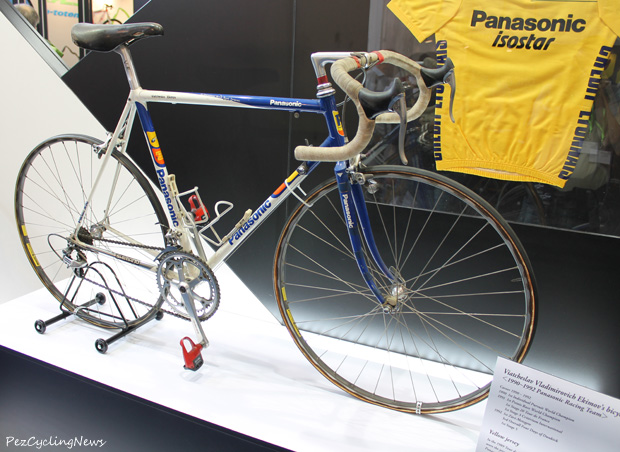 It wasn’t all just about modern materials and disc brakes at Eurobike though. There was also room for some classics on display, like Viatcheslav Ekimov’s Tour de France stage winning Panasonic team bike from the early 90’s. It was the top of its game at the time and it’s still beautiful but it’s amazing to see how far bicycle technology has come in the last 20 years. 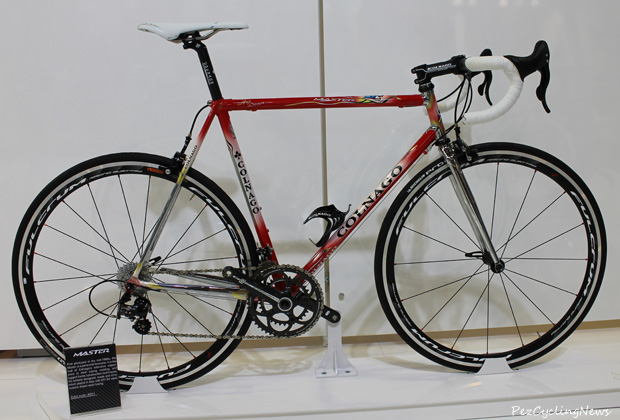 If you’re still a fan of steel though Colnago had it covered with their perennial favorite, the Master. This one was first produced in the mid 80’s and is still entirely designed, made and plated in Italy and is a truly special machine even amongst today’s carbon superbikes. 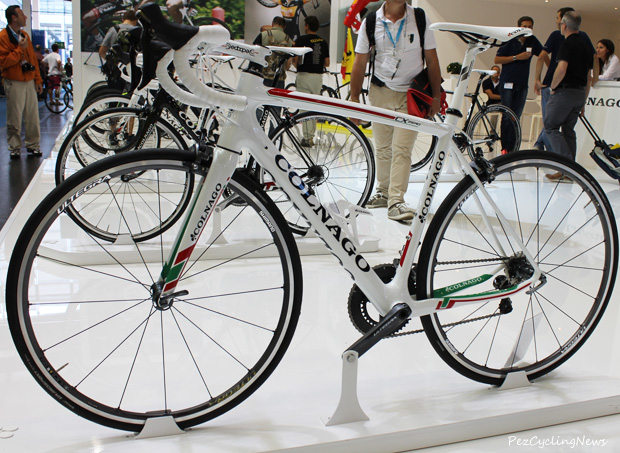 Colnago also had plenty of new stuff on display too like their CX Zero, available in disc or non-disc models and in a number of colors including this stunning white/Italian color scheme. 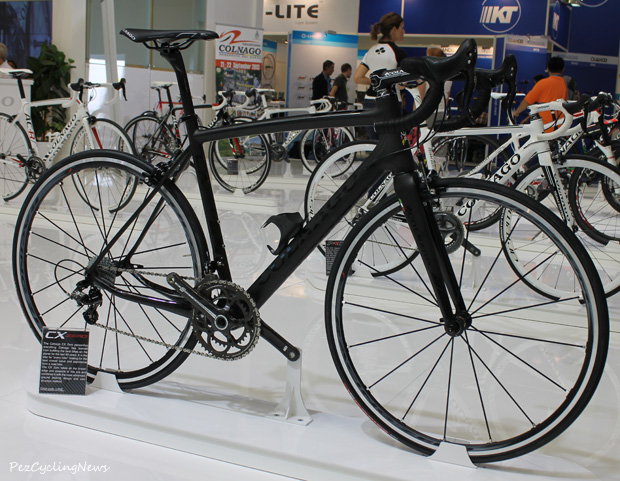 And also in this stealth Matte Black and just like the rest of their carbon frames, the CX Zero is designed to accept both electric and mechanical groupsets 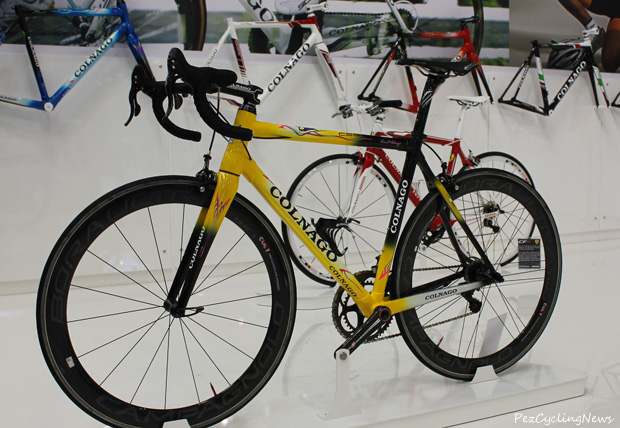 Speaking of color, the famous C59 is now available in 3 Art Deco paint schemes with the flashiest probably being the yellow pictured here, but also offered in blue and red (pictured behind on the wall). 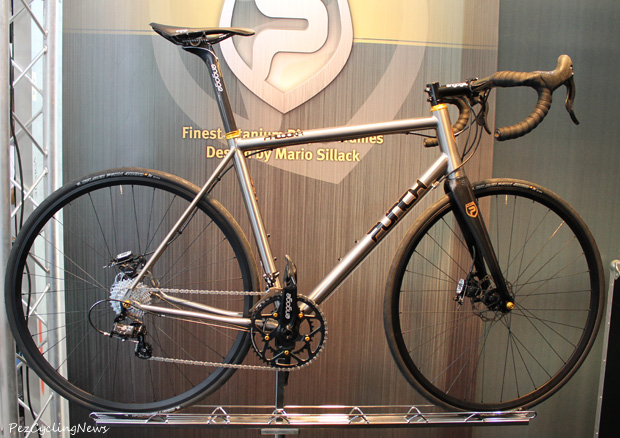 It’s easy to get blown away by the big dollar stands at Eurobike and their multitude of bikes, accessories and marketing people but sometimes it’s the smallest stands where you see some of the best gear, like this effort from Punch cycles. There were only two roadbikes, a cross bike and an MTB on their stand but the quality of their titanium machines was first rate. 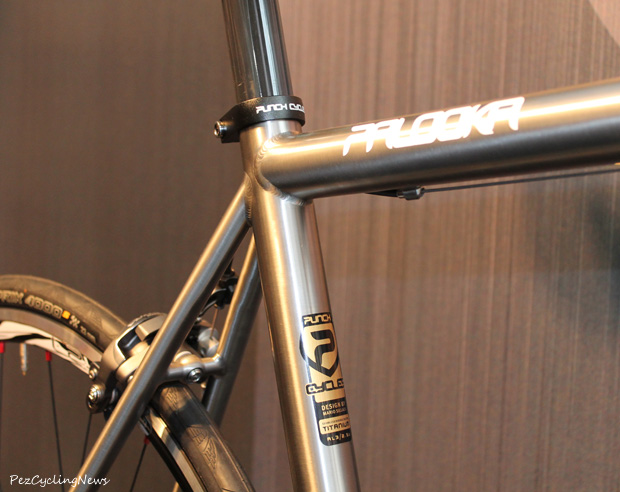 Punch owner/engineer Mario Sillack has a long history with titanium having worked with some of the best in the business like Seven and you can see his experience in the way these frames were finished. 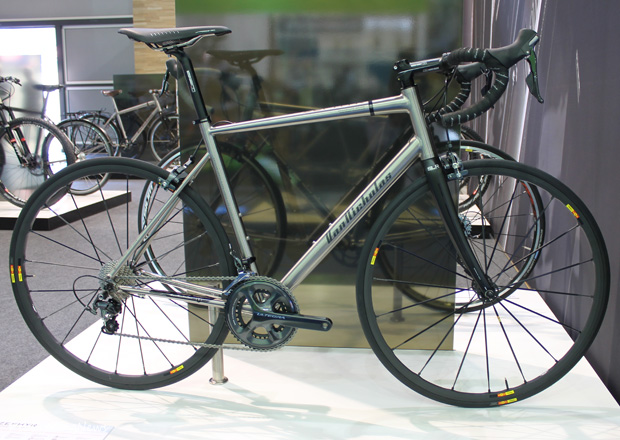 And here’s another one for Titanium fans, this beauty from Van Nicholas. There wasn’t a lot of titanium on display at Eurobike this year but what was there was pretty impressive. 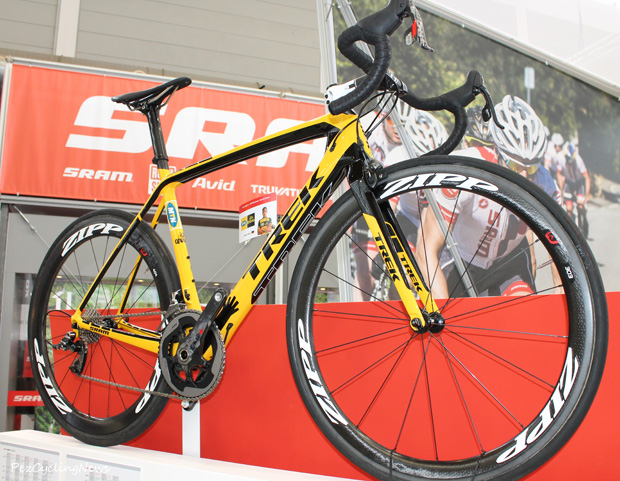 The only Trek at Eurobike after the American company decided not to display their wares at the world’s biggest bike show was Gerald Ciolek’s bike displayed on the Sram stand. 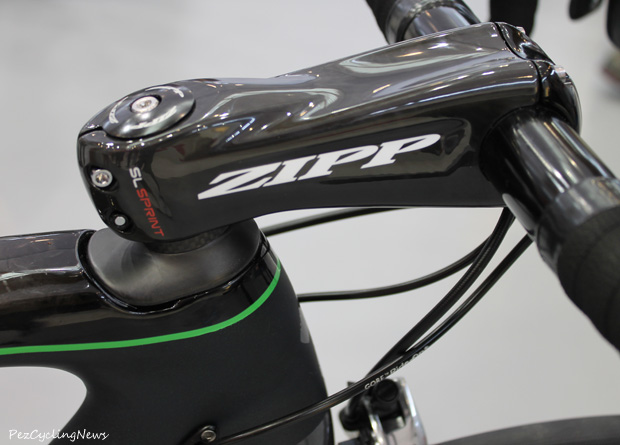 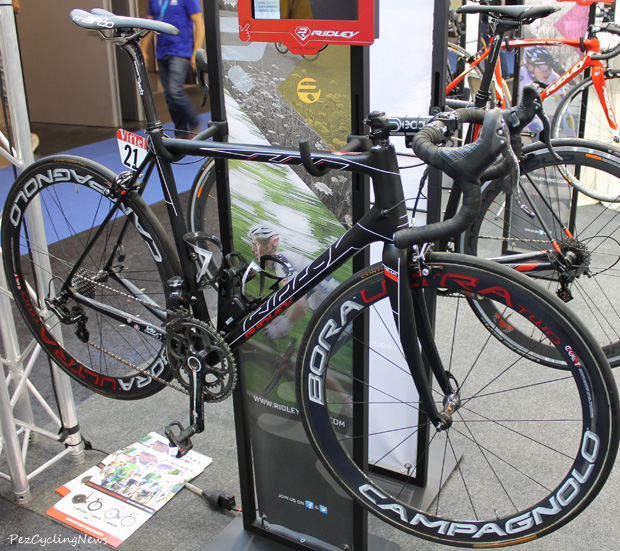 Over at Ridley they had a couple of Tour bikes on show too with Jurgen Van den Broeck’s Helium taking pride of place at the front of their stand…. 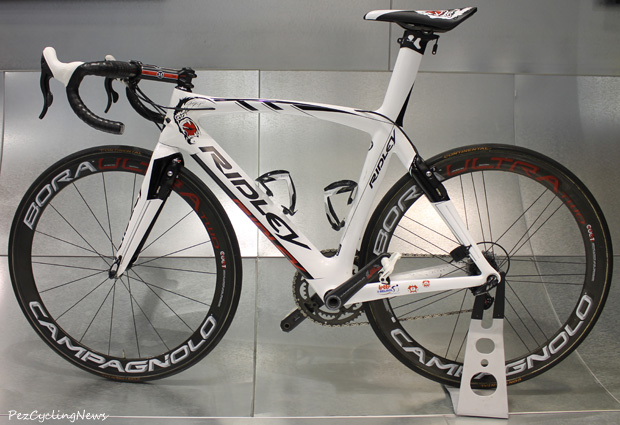 While in their mock up wind tunnel they had André Greipel’s Noah Fast on display. Some differences between climber Jurgen’s bike and the Gorilla’s machine include a change in pedals with Jurgen taking the lighter Look Blades whilst André prefers the cheaper Keo Max 2 pedals that he can dial up to a higher tension. Jurgen also opted for the electronic shifting from Campy but André has switched back to the reliability of mechanical shifting to transfer his massive power to the road. 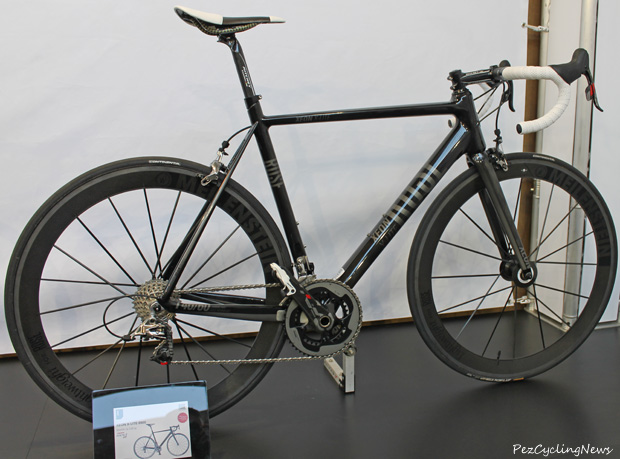 At 5.65kgs with Sram 22 spd and Lightweight’s latest Meilenstein wheels on board we won’t be seeing this Rose Xeon X-Lite anytime soon in the pro pelotons, but it was a beautiful looking machine and ready to race – if it’s a non UCI race that is! 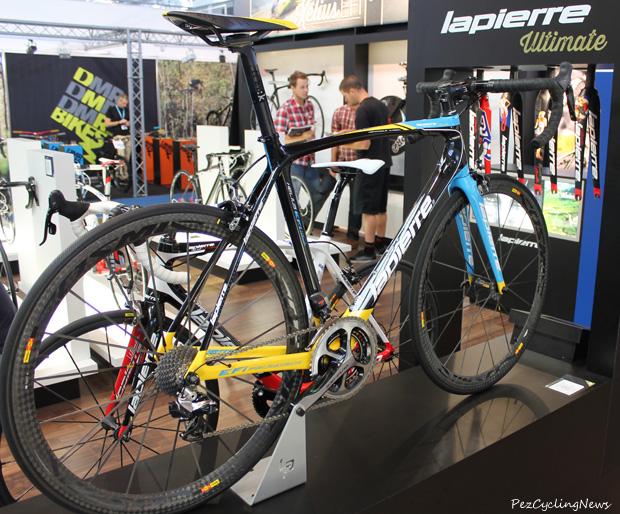 One bike that we have often seen in the pro peloton is Lapierre’s Ultimate through their association with FDJ. 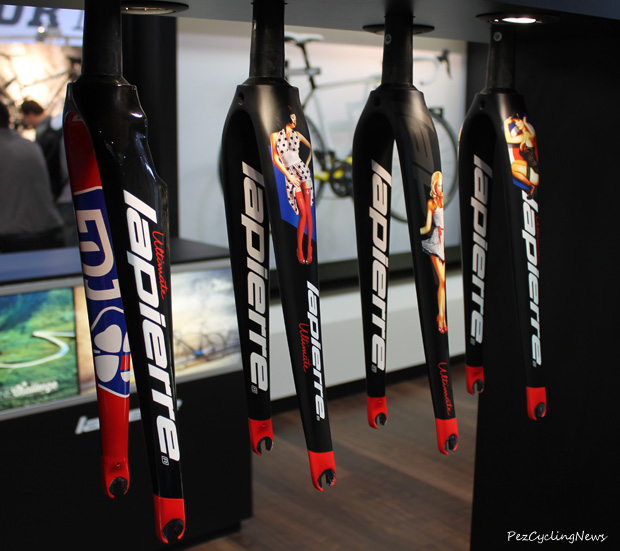 Unfortunately neither the Ultimate nor their new forks that you can choose to go with the Ultimate of FDJ colors or 3 vintage pin up themes are available Stateside for the moment. 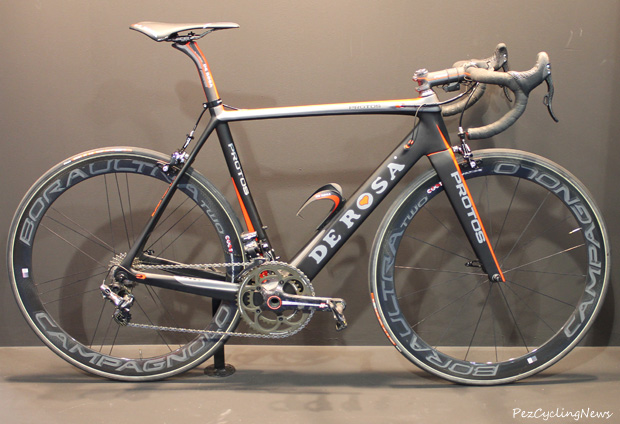 De Rosa had a stand full of exquisite machines with this Protos with Campag’s electric gearing catching my eye. 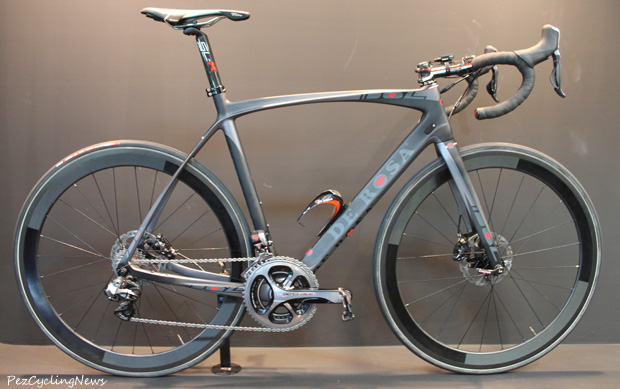 As did this full Durace Di2 hydraulic disc equipped Idol. 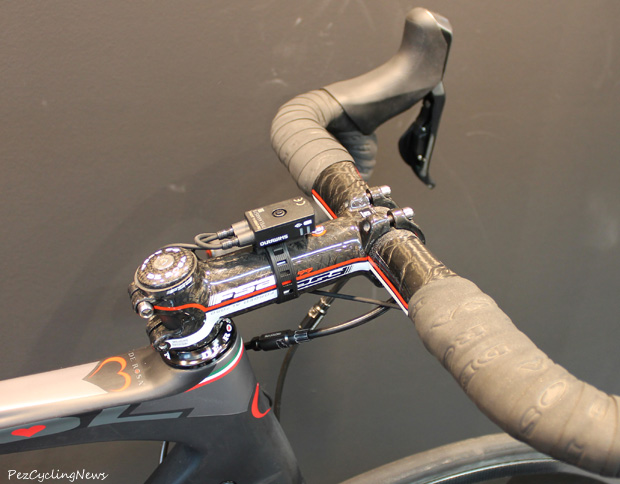 Each bike on the De Rosa stand had their typical high quality finish and feel but I wasn’t a fan of the way they’d strapped the Di2 junction box to the top of the stem on the Idol. 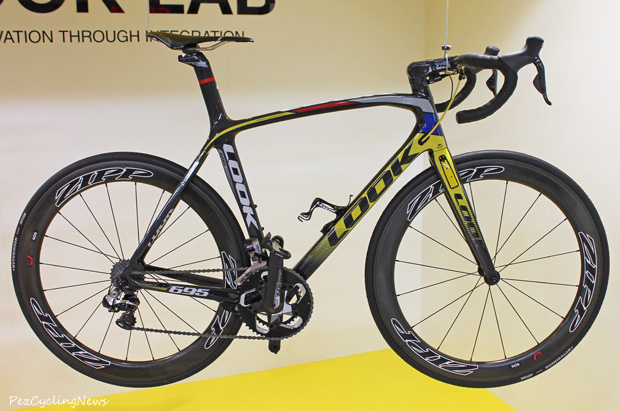 In a show with literally thousands of the best bicycles in the world it’s hard to choose a bike for the title of ‘best bike’ of the show but if I had to, I would choose Look’s new 695 Aerolight. The engineering that has gone into this machine is remarkable and I was lucky enough to have some good one on one time with one of the designers who talked me through some of the features of the 695. 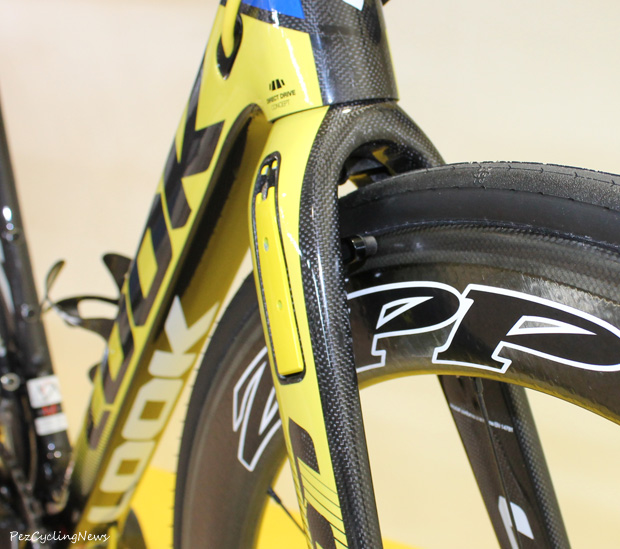 Most notable is the newly designed front brake which is actually built into the fork. Many manufacturers are using various styled U brakes behind the forks for better aerodynamics but LOOK have really taken things to a whole new level with this system. 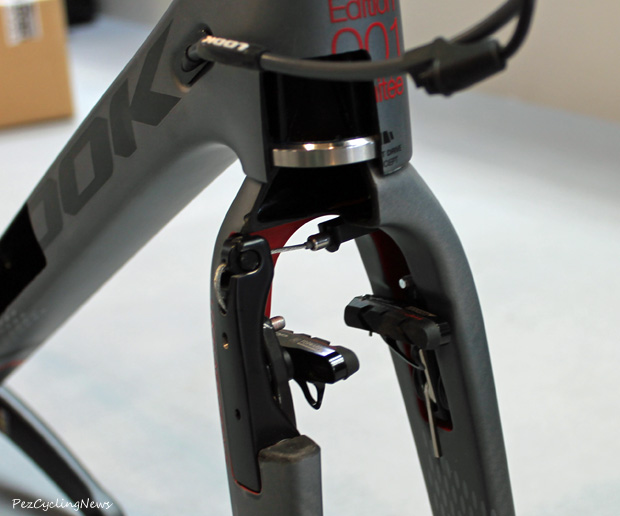 The cutaway on this prototype shows the front brake in more detail. 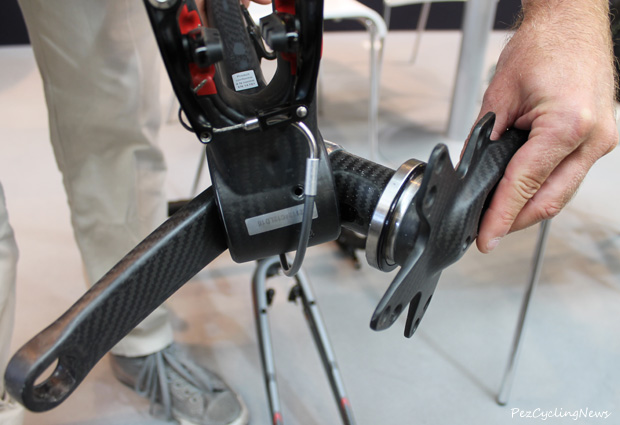 Another cool feature is the use of LOOK’s incredibly engineered ZED 2 crankset. The 695 has an oversized bottom bracket (Rolling bearings of 65 mm) to accomodate the ZED 2 which has a one piece carbon body and weighs just 320 grams. 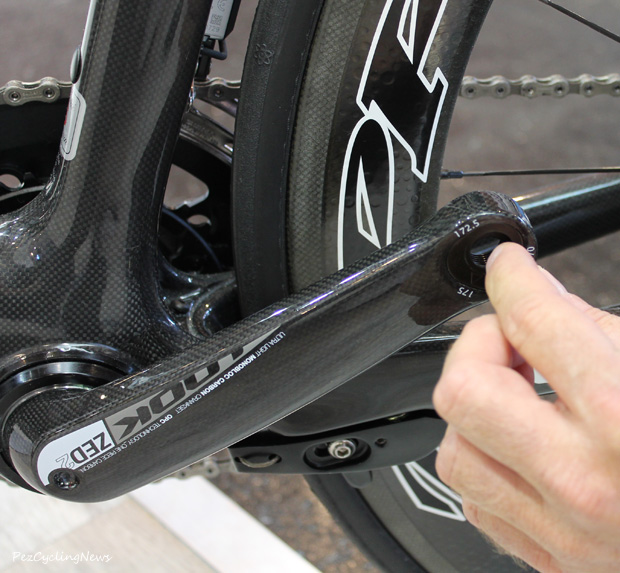 Apart from it’s low weight, strength and rigidity the ZED 2 also has the added plus of being a 170, 172.5 or a 175mm crank – all in one. A patented system of simply changing the direction of a couple of bolts in the crank where the pedal attaches and you could change from 170s to 175s and back again in a minute depending on what type of racing you were doing. 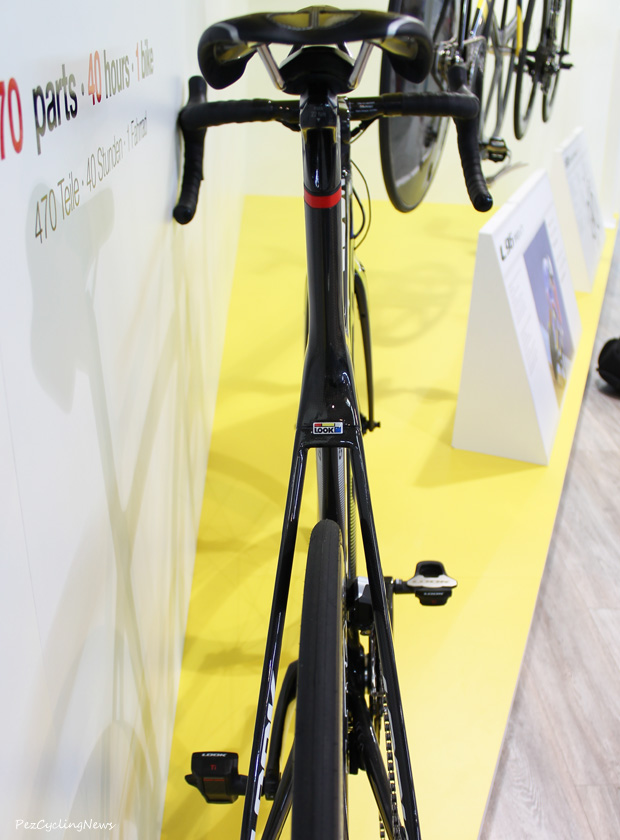 And I say racing because this bike is certainly designed to race. Check out the view from the rear! Everything about the bike has been designed with aerodynamics in mind with wind tunnel tests proving that this new model 695 is 3% faster than previous models which were already mighty quick. 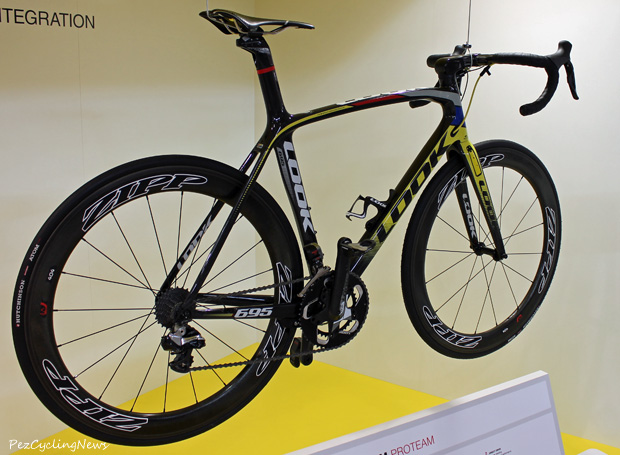 I wasn’t the only one that was impressed by the 695 with the bike receiving a Eurobike award for its engineering and design.

Lots more to come from Eurobike this week on PEZ as next up we look at the accessories, the Eurobike Demo day, the bizarre bits and yet even more bikes. Keep it Pez!