There’s not much in Italy that does not involve food – and good eating is as much part of the Italian cultural experience as it is nutritious and tastey. I’ve eaten a lot of great food in Italy, and I love sharing these stories with PEZ-Fans in the hopes that you too may enjoy such good luck, this story is about my original “Meal To Remember”, and still ranks among the best I’ve ever eaten.

My drive from Udine to Bassano del Grappa was a tough one. The day after my Zoncolan ride and to bed at midnite – I was tired and sore. It was 2:45 PM when I pulled out of Udine after writing up my Zoncolan report and catching up on some work. 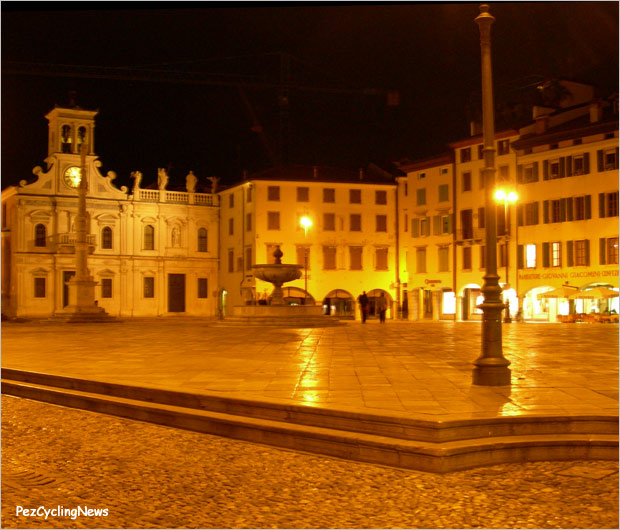 After a couple of grappas too many, my walk through the old center of Udine took on a distinct glow.

Only a couple hours on paper, it took around 3-1/2hrs to complete due to traffic. The northeast of Italy is home to all kinds of industry and by late afternoon – the roads are plugged with cars.

Things picked up when I arrived at Ca Sette in Bassano del Grappa – my hotel for the night – and a favorite of Nonstop Ciclismo – the California-based cycling tour company who specializes in cycling trips in Italy.

I lucked out and had been booked into the Napolean Suite – which was actually bigger than the main floor of my house. Two huge bedrooms, 16 foot ceilings, a gigantic main room that had a ten person dining table at one end, and a spacious tv/ stereo area surrounded by a couch and two chairs – all leather. The bathroom was up a marble stair case – jacuzzi tub, twin sinks, marble top to bottom. My room the night before was a Euro-classic – 10’ x 10’ including bathroom – tonite I was standing there… a lone PEZ amid 2000 square feet of luxury. I actually thought they were joking when they gave me the room. 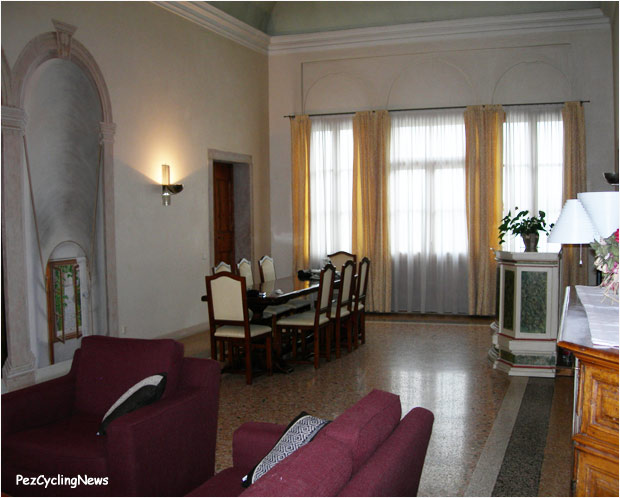 The entire Napolean Suite to myself and no Mrs. Pez to enjoy it with.

The problem was no internet. The clock was ticking onto 7PM and I needed to get some work done. After more than an hour of trying to connect to their ‘network’, I was ready to blow a gasket and in dire need of a negroni. I soon accepted my fate and shifted my plan to dinner and getting caught up on some much needed sleep.

The Meal To Remember
But I’d been invited to a ‘party’ by my good Italian friend Mino – (and stage 16 driver), who has various cycling connections including the UCI and Team Liquigas. It was a dinner hosted by one of the team’s smaller sponsors Pelletterie Contarin – one of the largest retailers of handbags in Italy. 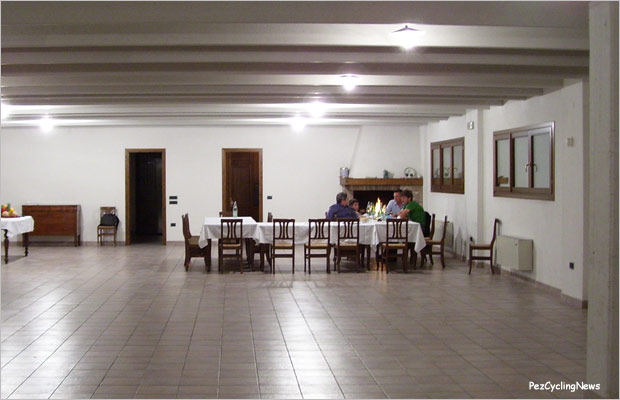 Dining at the head table – it doesn’t get any more exclusive than this.

Antonio Contarin and his family (of course it’s a family business, this is Italy) showed us their store, over 2500 square meters of retail space on the main floor of a multi-story building they own – and live in. Then we were led downstairs to a huge banquet hall that seats up to 250 – but is only used for personal functions. The space was empty, except for a roaring fire blazing in the low open fire place in the far corner, in front of which was set a large u-shaped table set for 25.

With the Giro being so busy, it’s a challenge to get any normal kind of rest, and unfortunately, all of the guests had cancelled except for myself and – get this – Danny t’Ven – the bus driver of Team CSC. I felt bad for our hosts, who were clearly putting on a giant spread, and also for my man Mino – who’d done his best to organize the dinner. I almost cancelled myself – I was exhausted and cranky. But regardless of my impending late night – I knew I would in for the ‘true’ Italian dining experience. 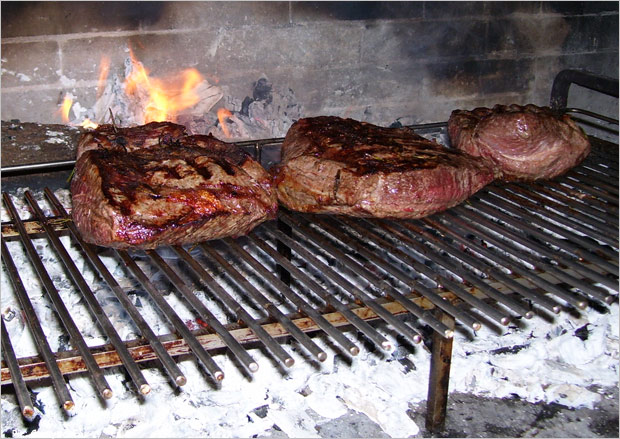 What followed over the next four hours – yep – 4 hours – was a feast the likes of which I’d only read about until now. It was so incredible, that it did not take long for me to know I’d be sharing this experience with the mighty PEZ readership.

In charge of cooking were Antonio’s wife Ida and her father Giuseppe – who was presented as one of the best chef’s in the region – although details of his culinary credentials were never discussed, I will confirm that the food was all the proof I needed.

As is normal with many Italian family dinners – the room was well lit – better to see your food, the table IS the atmosphere. Our voices echoed around the large hall as the wine was poured – bubbly prosecco as the white, and endless bottles of local red. Plates of their homemade prosciutto and freshly cut melon, and mortadella were laid down next to the huge bowls of freshly cut red and yellow peppers, freshly baked rolls and the always present breads sticks, and a two huge bowls of salad made from different types of local lettuce. The antipasto course was enough for my lunch.

My long day meant I had not eaten since 2PM, but if there ever was a time to be glad I was starving – this was it. 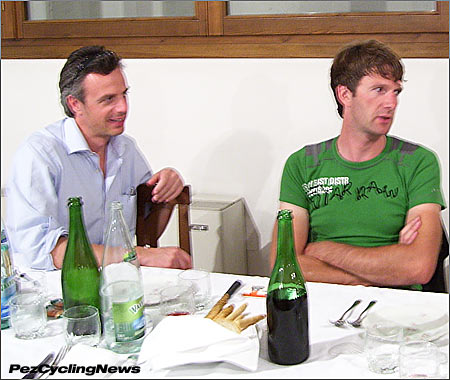 My Italian buddy Mino Pianco (l) tapped me into this exclusive affair – and a seat next to CSC’s bus driver Danny (r).

Now that my initial hunger had been quelled – I was ready for some serious eating – and as I watched Ida stoke the fire and arrange the embers under the low grills placed at the edge of the fire – I knew I was in for an event of Food Channel worthiness.

Next it was onto the corsa prima – which much to my approval was a steaming plate of risotto con gamberi (prawns). I love a good risotto – and this was the best – the rice was cooked to creamy perfection – with just the right amount of bite left in the texture.

At this point I was satisfied – I’d eaten as much as I’d normally have for dinner, but when our hosts carried out a large platter with 4-5 huge slabs of beef, 2 inches thick – my taste buds started tingling. Onto the grill they went – and in a few short minutes we were enjoying tagliata di manzo. The thick steaks are grilled to rare, then cut into thin strips. I discovered this treat two years ago, and was on a mission to enjoy as much as possible this time around.

There was as much as any of us wanted – and a lot more. Now I was getting full – I mean ‘unbuckle the pants’ kind of full. After a few minutes ‘rest’ – our hosts asked if we wanted to taste another type of beef… there was only one answer to this question, and another platter of meat appeared – this time a shoulder cut – large steaks but thinly cut.

Both meats were cooked to perfection – red on the inside to present the best flavours. Both were incredibly tender – and both were among the tastiest beef I’ve well… tasted. They were seasoned only with salt and pepper from what I could tell – no fancy marinades or rubs needed here.

But don’t even think this meal was getting close to finishing. After a few more minutes of not eating, the cheese and fruit platters arrived – 3 kinds of hard cheese – including the largest wheel of grana padano I’ve ever seen outside an Italian deli. I can always find room for a little more cheese – the tastes and textures are so good on the palette.

The fruit platter consisted of more huge chunks of freshly cut melons and big red ripe strawberries – not the kind I usually see at home that have spent the last three weeks on a truck from California. 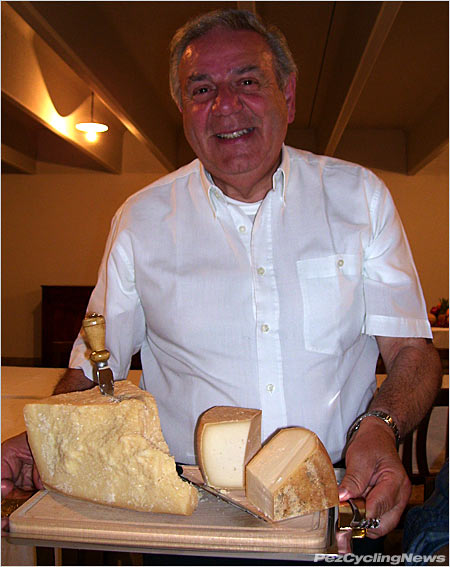 Giuseppe presents the after-dinner cheese plate as it should look.

Finally – the end of eating was in sight as 5 large platters of cakes and tortas arrived. I managed only a few bites of the chocolate cake. I was done. Ready to just lay on the floor kind of done.

Sometime not long after midnight, the espresso was made and the grappa bottle placed on the table.

The evening eventually came to an end – but not after I’d been made to feel like one of the family – and enjoyed the kind of hospitality and food you only read about – which is I guess you’re doing now. As open and warm as the Italians are, there’s still much more to be had when you know the right ones. 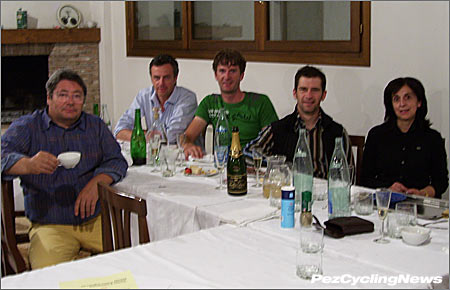 Our hosts Antonio Contarin and his wife Ida graciously put on the full Italian spread.

My Italian mother-in-law would have been proud – finally I took her advice to “mangia, mangia”.

It was around 12:30 AM when Antonio’s teenage son Adriano drove me back to my hotel, the velocity of our car on the narrow streets proof that he’s done this drive before – where I made lights out by 1AM. I’d eaten enough for a least 2 full meals, and my 8:30 meeting with saddle maker Selle Italia meant I’d be up at the crack of 7 (again) – Oh well – I’ll sleep when I get home – this is the Giro baby!