Roadside St. 3: Two years ago, I watched the Giro riders set off from Amsterdam. Back in the hotel that afternoon, I watched Wouter Weylandt sprint to victory in Middelburg. One year ago, I was watching at home when Weylandt crashed. I feel older still when the stage held in his memory ends in more carnage today.

The Best of PEZ – To help make brighter these winter days, we’ve selected for your viewing pleasure, what we think are some of our Best Stories of the Year. Sometimes a glance back helps clear the path ahead, and we hope you enjoy one more look as much we do. This story originally ran in May 2012. 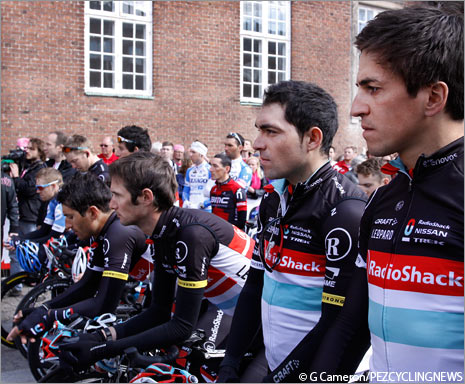 It’s a reminder to us all of how fragile everything we hold dear really is. Weylandt was only 26 when he died and his loss touched everybody. Family and friends, colleagues and admirers will think of Weylandt and count their own blessings today 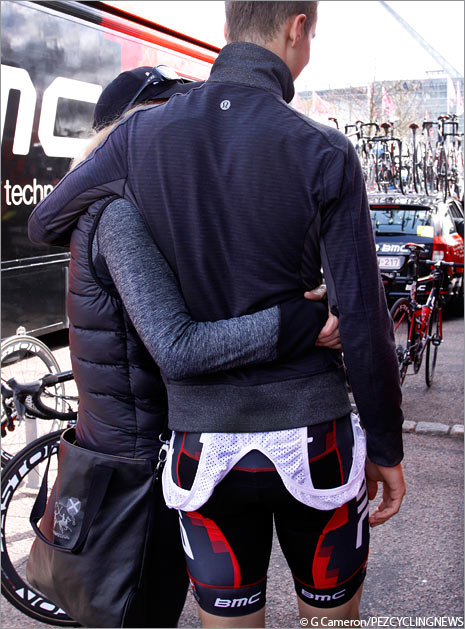 We enter Horsens at the business end of today’s course, abandoning our car on Stadiumvej, opposite the CASA Horsens Arena. The team buses are pretty quiet as it’s a bit of a hike to the start line and the fans have congregated there instead. Overall leader Taylor Phinney gets a morale-boosting visit from his mother ahead of what would be another painful day in pink. 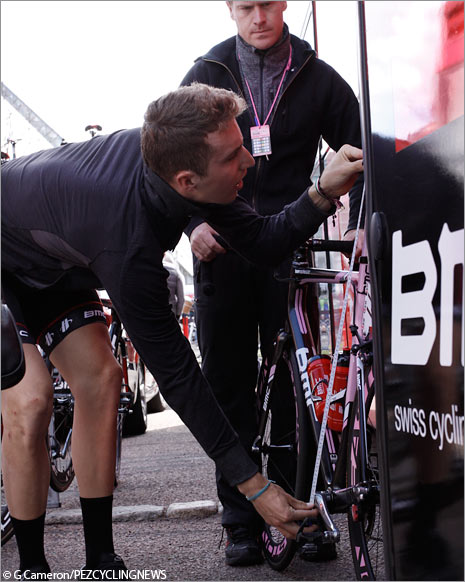 There are a few types of rider: the super-talents who don’t care about how their bikes work and believe in ‘feel’. The rest of us. And guys like Phinney who are millimeter precise in terms of fitting and positioning their equipment, and bring all of that focus to bear with the full force of their abilities. 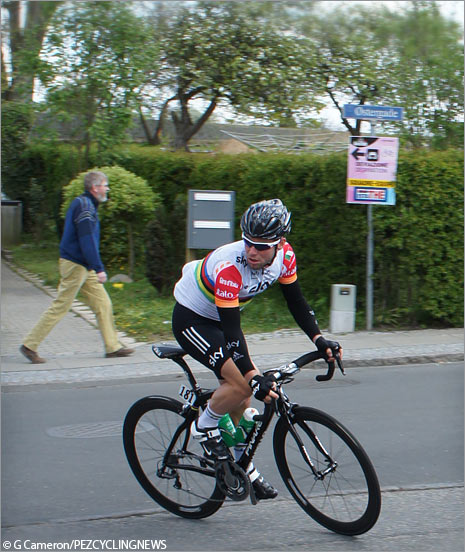 The riders ask for directions from the local cops and then meander away through residential streets to sign on. The world champion’s bands hide the points leader’s jersey as Cav tootles along, and an old woman on a mobility scooter gives him nary a glance. 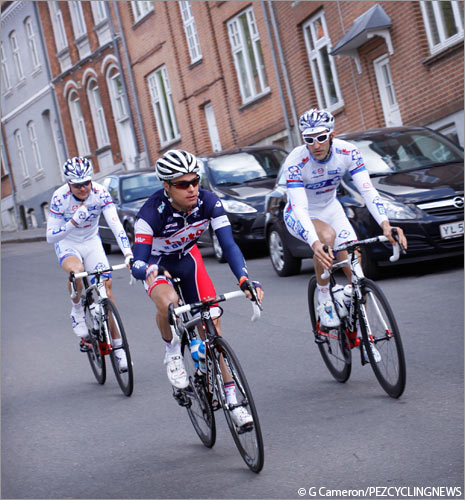 We stamp downhill to town as fast as possible. Now I ain’t superstitious, just like Chicago blues legend Willie Dixon, but a fluffy white cat just crossed my path, the paths of some riders and an oncoming taxi. We all miss it by a matter of feet. “Oh la la!!!” scream two FDJ guys in unison. A Lotto-Belisol rider holds up a couple of fingers to us … he wasn’t being rude, just telling us how many of its lives the cat had used up. It was a winning gamble today – hopefully, it stays lucky.

It’s a rather muted day in Horsens. The town’s former mayor Jan Trшjborg passed away while taking part in an amateur bike race ahead of the Giro’s arrival. He used to be a Social Democrat defence minister in the 1990s and was one of the major players in bringing the Giro here. From the amount of TV coverage and front pages headlines, it looks like he’ll be missed.

Down at the start line, the riders are gathering well ahead of time today. It’s a special stage for remembering one of their own.

Everything falls into rest. Only the gentle thrum of car engines idling and, far overhead, the dull rumble of the TV helicopters.

The fans barely murmur, the kids’ hold those pink Giro ‘clackers’ still. Riders have unclipped their helmets, heads are bowed. 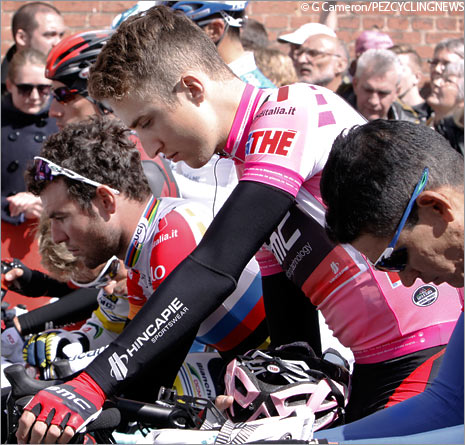 There is a perfectly observed minutes silence …

The RadioShack-Nissan boys, and Tyler Farrar (Weylandt’s pal), are in the front rank as Giro boss Michele Acquarone gives a speech. I’m too far back to hear what’s being said. Then Weylandt’s sister reads a message. 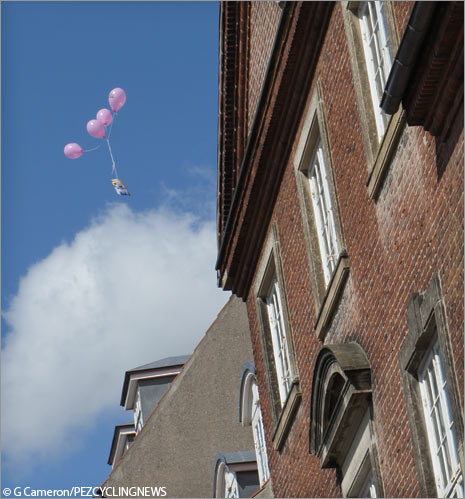 Applause starts to ripple around the sign-in area and everyone looks up to see a raft of pink balloons swept away to the heavens on the breeze.

Then ‘Sex on fire’ by Kings of Leon blasts out, Weylandt’s favorite song

All around is the strong scent of embrocation as we’re still further north than some of the more warm-blooded might wish, and plenty aren’t used to single digit Celsius in May! 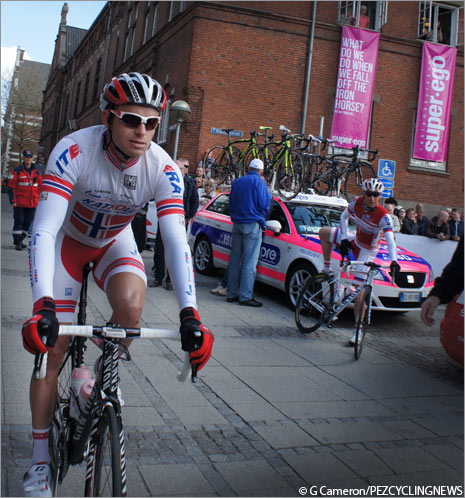 One of yesterday’s crash victims looks better today. How are the ribs, Alexander Kristoff?

“Ach, I feel OK. The ribs are not too sore. But my hand …” He winces as he flexes the fingers.

Will it stop you sprinting today?

“I hope not.” He turns to sign autographs and rolls away. 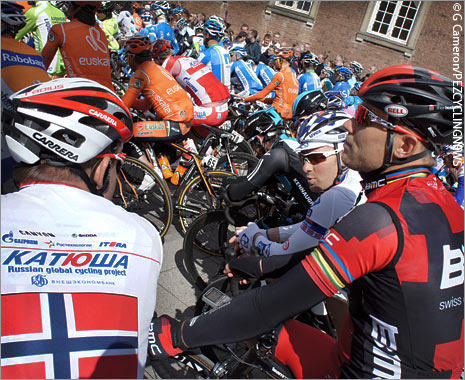 Moments later, he’s joined the rest of the Norwegian contingent in this year’s Giro to speak their mother tongue for a few moments. It’s the calm before the impending storm, the rapport and the reflection. 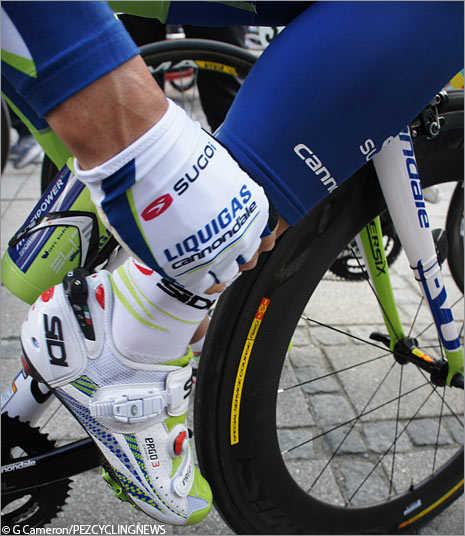 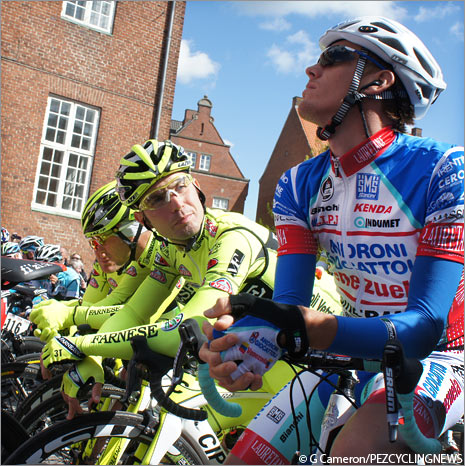 There are daydreamers and chatterboxes. Quiet prayers and the sign of the cross. 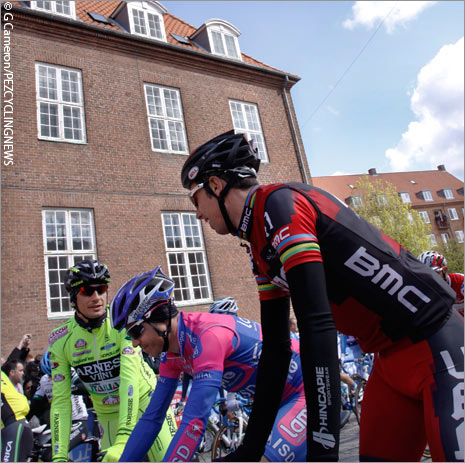 There are big names and strong personalities holding court. 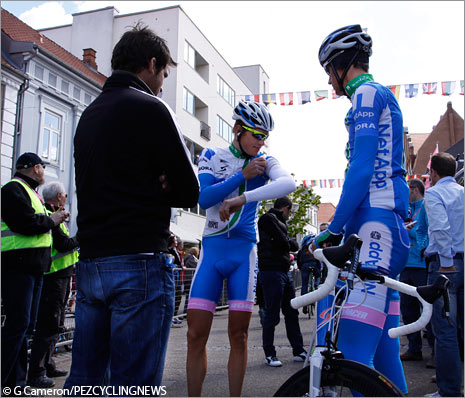 Giro wildcards NetApp fiddle with their armwarmers as DS Jens Heppner cuts a still-trim figure in front of the TV cameras. Their performances will be endlessly scrutinised, especially by the Italian continental teams that missed out, so they may as well look the part even if they don’t make today’s break. 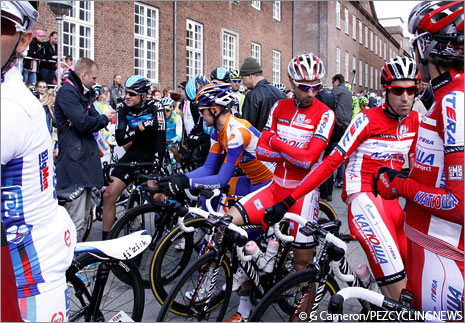 The flag is about to drop. The riders shoot final pleasantries and jokes as the anticipation peaks. Team personnel swarm around, journalists ask for more predictions, photographers scuttle about all hunched over under the weight of camera bodies and team cars start to rev their engines. They’re gone to cheers and whistles. 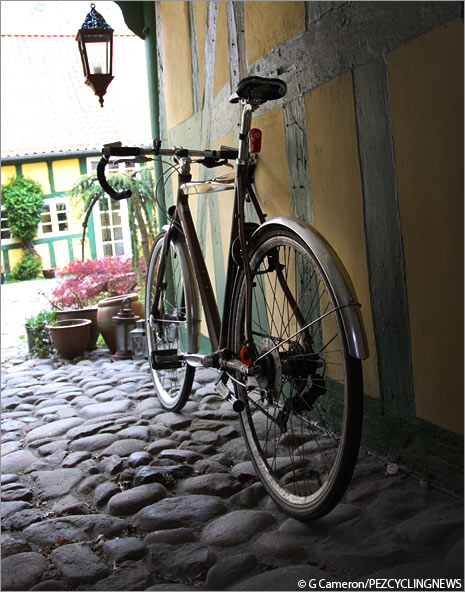 We meander away to look for something pretty, down towards the harbour. We duck down an alleyway to escape the Giro’s thumping Europop, which just doesn’t sit right today. 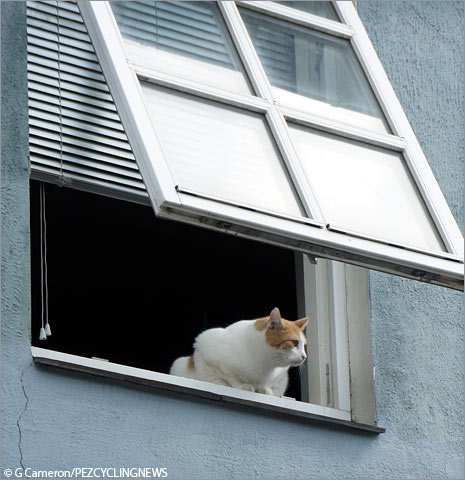 A smarter observer takes a loftier view of proceedings, as some of the Team Sky soigneurs enjoy a coffee down below. 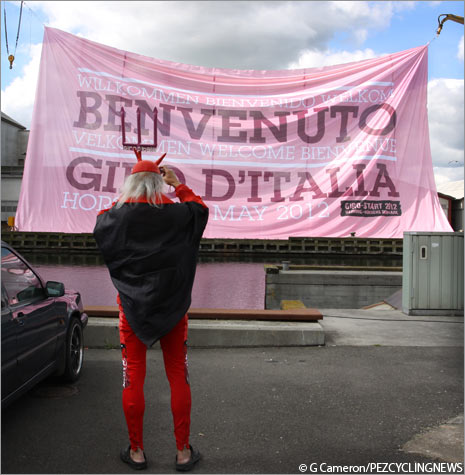 Tourists take their souvenir snaps, and we ask directions from a policeman as we want another chance to look back in the Museum of Industry which celebrates the Giro’s history. He’s happy and friendly but: “I have no idea where that is!” We eventually find Pantani’s shoes and maglia rosa from 1998 sitting beside Fausto Coppi’s leader’s tunic from the ’50s. 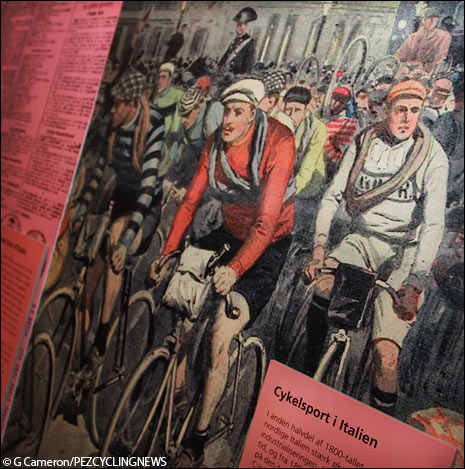 There are old Campagnolo components and clips of the greats: Bartali, Merckx, Gimondi, Moser scrolling through on the screens. We have a too quick look around. 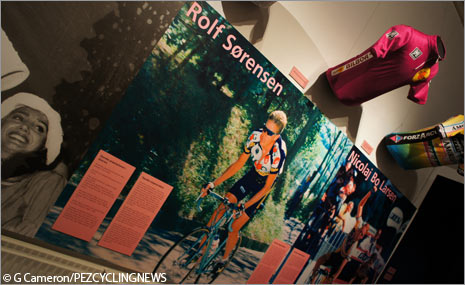 Overhead are the jerseys of some of the Danes to have earned their spurs in the Giro: Chris Anker Sorensen, Nicolaj Bo Larsen, Rolf Sorensen. 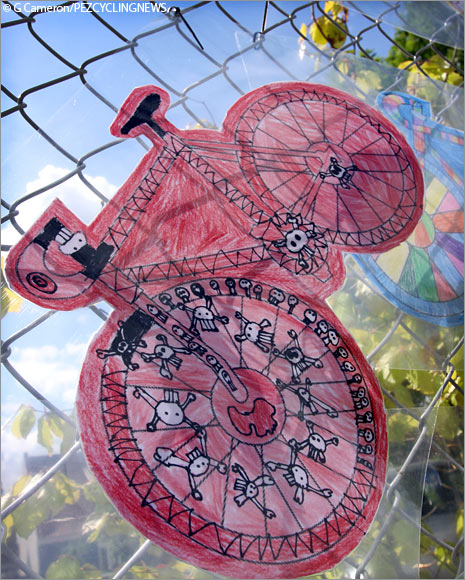 We have a date at the airport and can’t stay for the Giro’s return to Horsens. We can hear the helicopters again as the race nears its first passage through town. The next noise we hear is laughter, unfettered delight. Kids charging around their playground as the teachers try to keep control. The new generation have embraced the bike and what it means. And the Danish Giro helps us to remember those that have gone before.