Bettini Out of the Classics

Paolo Bettini’s problems with his left shoulder persist following his fall after 52 kilometers of Ghent- Wevelgem last Wednesday. The racer from Quick Step-Davitamon suffers from deep bruising and sub-cutaneous lesions that have damaged the ligaments in his shoulder and has stopped him from training on the bike. 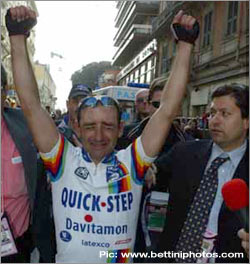 “From the day of the crash to today I haven’t been able to train; yesterday after watching Paris-Roubaix on television I tried to get on the bike, but I immediately had to get off because of the pain”.

In agreement with the staff of the team, Paolo Bettini has decided to not take part of the second half of the classics of the north (Amstel Gold Race, Fleche Wallone, and Liege-Bastogne-Liege).

“The first two objectives of my season – explained Bettini – were Milan-San Remo and Liege-Bastogne-Liege. I’m sorry that I won’t be able to take part in Liege. Competing with the number one on my bib would have given me a lot of pleasure. The season, however, is long. Now I need to concentrate on recovering so that I can be at my best for the second part of the season, above all, in the World Cup”.

WANTED: Your Own Private Roubaix