Bloke: No Such Thing As Bad Weather, Only Bad Clothes

I’m well into the base period of my winter training now and the hours are starting to tick by faster during those long steady rides. The last two days have been the first bad weather for a long time but it’s a good opportunity to adapt to riding in the rain and cold. (Well that’s what I have managed to convince myself…).

Anyway, as the Norwegians say ‘there is no such thing as bad weather, only bad clothes’. Put that in your pipe and smoke it. I do agree with this pearl of wisdom though as I’ve really enjoyed my rides even in the bad conditions. It makes life more interesting. Except for that, eat, sleep, train, eat. 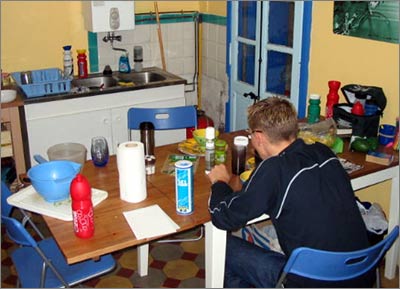 Oh yes, and then there was the annual meeting affair…
A couple of weeks ago we had our annual team meeting. This was a pretty serious affair with all the big guys in charge of the Castelsarrasin cycling association plus some other significant looking people that I didn’t recognise. Picture the scene, big stage, power point presentation, big audience – me in it. It was meant to be a presentation reviewing the year followed by a banquet in a nearby chateau. There was me expecting to be sitting there for an hour at most. Little did I know it would be a three-hour epic talk fest (all in French of course). Didier Rous was obviously given some inside info on this as he arrived fashionably late for the last hour only. What could have been an entirely dull experience was comically flavoured with a photographic presentation review of the year to the music of ‘I will survive’. I will forgive the French for their taste in music on the basis that they have provided me with a good cycling team.

The evening’s entertainment then continued with the meal. I decided to follow our bike sponsor in his Mercedes to the chateau, as I didn’t know the way. So much for my resolution to obey the speed limit. After a white-knuckle ride trying to keep his car in site and a few hairy moments on the unlit country lanes of the Tarn-et-Garonne region we arrived. Then followed an epic five-course meal starting at 10 in the evening and ending at 1:15 in the morning. The dancing in between courses didn’t speed up the proceedings. After finally arriving home I collapsed into bed dreaming of the 5-hour ride to be completed the next day. I did complete it, the need to burn off the catastrophic number of calories I consumed the previous night being a primary motivation.