“It’s a big relief. It’s a weight off my shoulders. I got the monkey off my back and hopefully this gets the ball rolling, and I can start racking up a bit more [wins],” said van Garderen, of ending the race in the Amgen Race Leader Jersey he gained after Stage 5. With his five-week-old daughter Rylan there today to share his victory, he reflected: “Maybe becoming a daddy was the difference [in taking the overall win]… I think I’m just maybe a bit more relaxed, a bit more mature, and I just had to be patient.” 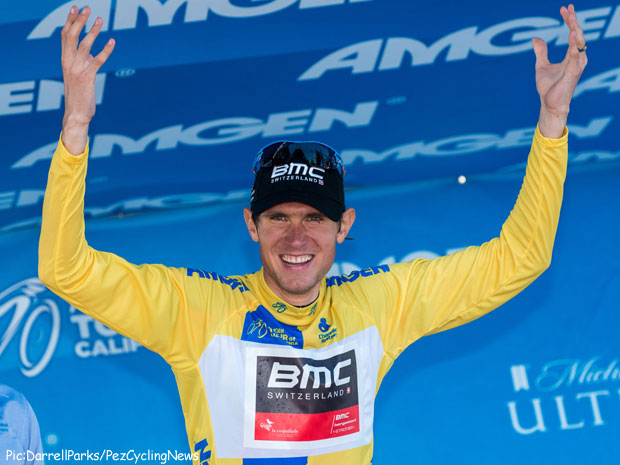 Cannondale Pro Cycling’s Peter Sagan outsprinted the field to win the race’s final stage, a 80.7-mile jaunt that took cyclists from San Francisco across the Golden Gate Bridge for the only the second time in race history, to the overall finish in the cycling mecca of Santa Rosa. 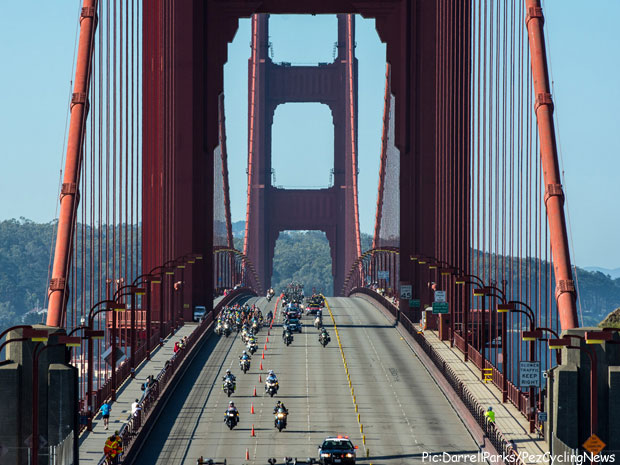 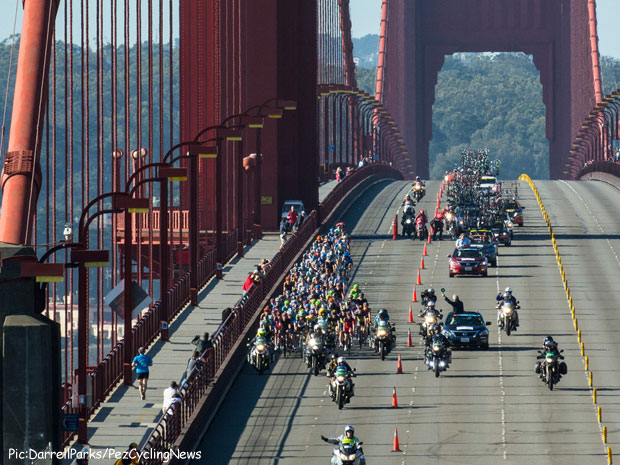 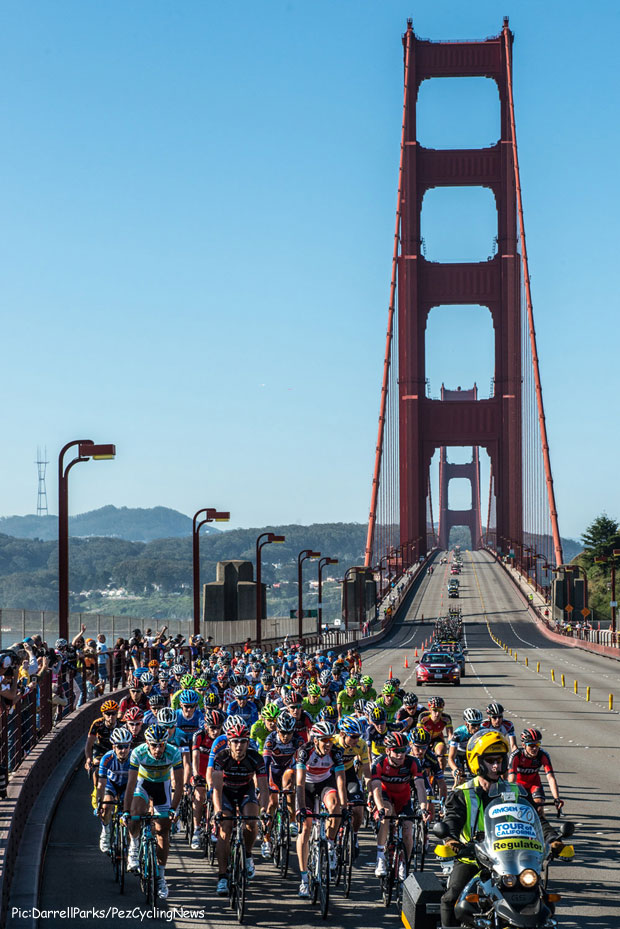 The race’s final stage aired live on NBC. It was Sagan’s 10th career Amgen Tour of California stage win, the most of anyone who has ridden in America’s Greatest Race. A sea of fans turned out for the BMC Racing Team’s homecoming, which included overall team honors in this year’s race. Team leader van Garderen was named the Best Young Rider in the 2011 Amgen Tour of California and placed fourth overall last year, but today marked his first career overall title with a final time of 29:43:00. 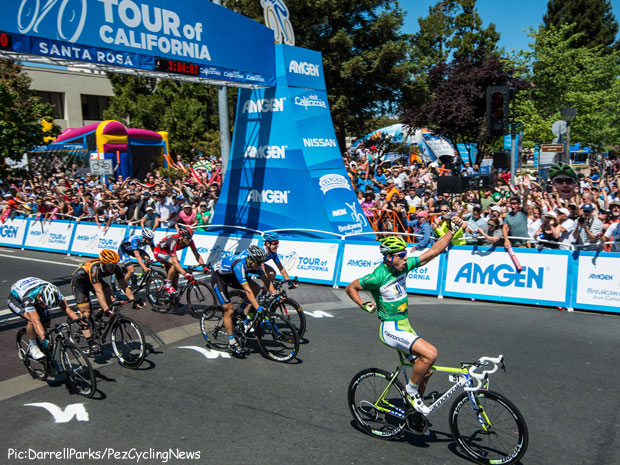 “I’m very happy for the win today and I thank all my teammates because we did work hard from the start and then when we [came to the] circuit, we were always in the front. And then Garmin was the last group, but my teammates helped me on the last turn. I was on the front, then I started doing my sprint the last 200 meters, and I won,” said Sagan. “I dedicate this victory to my Cannondale friend, Alex Shephard [an 11-year-old fan fighting brain cancer]. It’s great to win this stage because I get to dedicate this to him.” 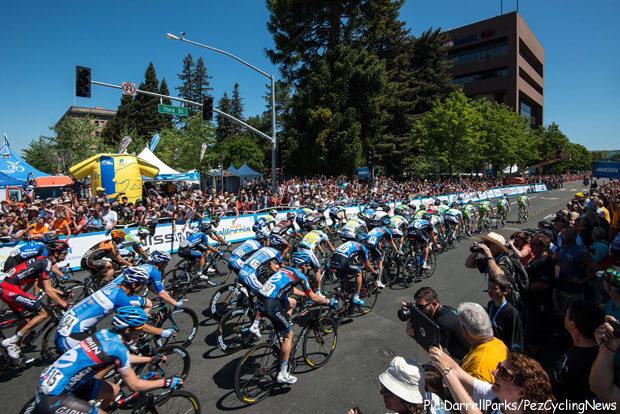 In the final five miles, where the racers completed two circuits in downtown Santa Rosa at speeds of up to 40 mph, teams jockeyed for position to lead out their sprinters for a dash to the finish line. After challenges from Team Garmin-Sharp, Optum Pro Cycling presented by Kelly Benefit Strategies and ORICA GreenEDGE, Cannondale regained control with .7 miles left in the race. 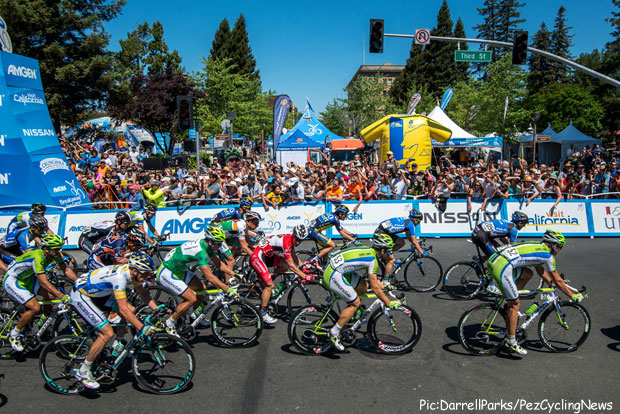 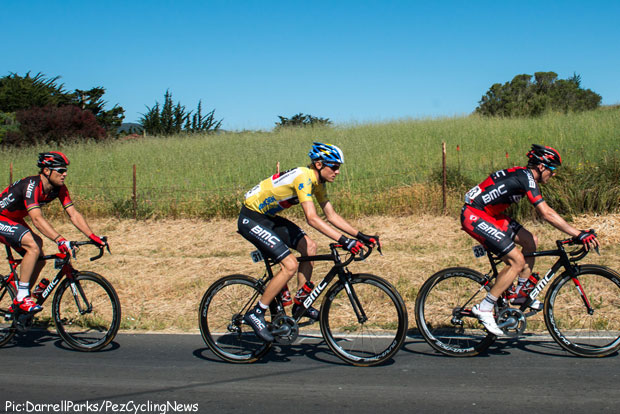 Stage winners were equal parts sprinters and climbers this year, as racers had to contend with several game-changing climbs that totaled a race record of 60,000 feet. Second for the overall finish was 2010 Amgen Tour of California champion Michael Rogers (AUS) of Team Saxo-Tinkoff (1:47), followed by Team Jamis-Hagens Berman’s Janier Alexis Acevedo (COL), whose determined climbs in Stages 2 and 7 earned him the precious seconds he needed for a podium finish (+3:26). Acevedo wore the yellow jersey for the first half of the race, and after getting caught out by a breakaway in Stage 5, he battled his way back to podium position yesterday to end the race just ahead of fourth- and fifth-place finishers Mathias Frank (SUI) of BMC Racing Team (+3:32) and Cameron Meyer (AUS) of ORICA GreenEDGE (+3:33). Proving on home turf they are a force to be reckoned with, American cyclists took four of the top 10 finishes overall. 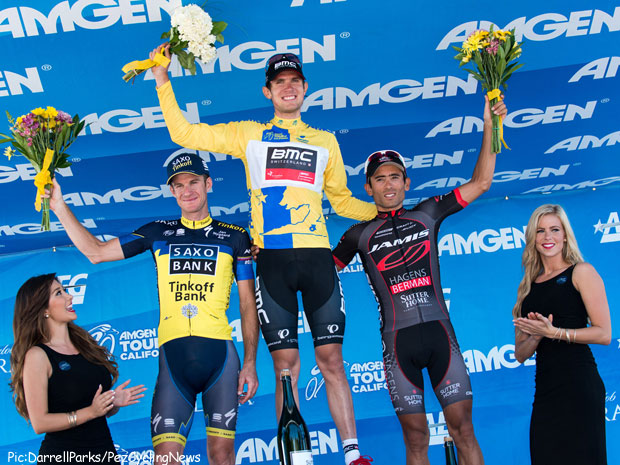 Earlier in today’s stage, a three-man breakaway escaped from the peloton around mile four and held their advantage until 10 miles to the finish, when Vacansoleil-DCM Pro Cycling Team’s Thomas De Gendt (BEL), the third-place finisher in last year’s Giro d’Italia, fell back into the pack. The remaining two riders, Bontrager Cycling Team’s Antoine Duchesne (Petaluma, Calif.) and Santa Rosa-based BISSELL Pro Cycling’s Jason McCartney (Coralville, Iowa) kept their lead until just before the finishing circuits. McCartney, the second of the three to rejoin the peloton, was awarded the Amgen Breakaway from Cancer® Most Courageous Rider Jersey for his ride out front today. McCartney is the only cyclist of the 127 who began this year’s competition who has started and finished in all eight editions of the Amgen Tour of California.

“It’s been fantastic,” said McCartney of his time with the race over the years. “One year I was third….I got the climbers jersey one year…we won it with Levi [Leipheimer] one year, with [Chris] Horner another year, so I’ve just had great experiences here. It’s a beautiful state. I love racing here.” 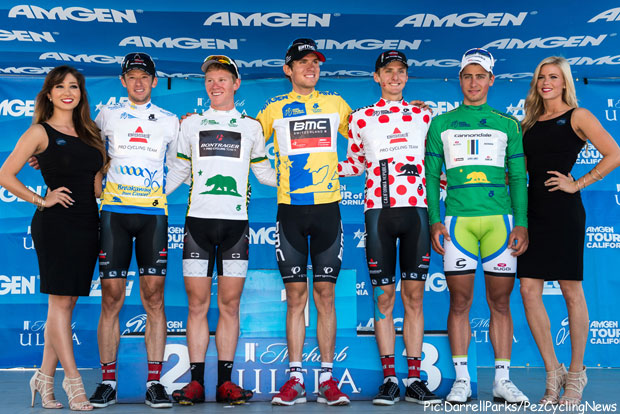 McCartney’s teammate on BISSELL Pro Cycling, Carter Jones (Boulder, Colo.), cinched the Nissan King of the Mountain Jersey competition yesterday, having worn the polka-dotted jersey every day since the race began; and Bontrager Cycling Team’s 21-year-old Lawson Craddock (Austin, Texas) came away with the Crunchies Best Young Rider Jersey, which he has worn since Stage 3.

“The future of American cycling has arrived. How fitting that in America’s biggest stage race, we’ve seen America’s next big cycling superstar emerge to claim his first major stage race victory. And, a great showing of top-10 finishes by Americans in a field of the top riders in the world,” said Kristin Bachochin, executive director of the race and senior vice president of AEG Sports. “The 2013 Amgen Tour of California was the most spellbinding yet, and it’s thanks to our sponsors, partners, Host Cities, teams and riders – and most importantly the fans – that the race continues to grow in both size and prestige year after year.” 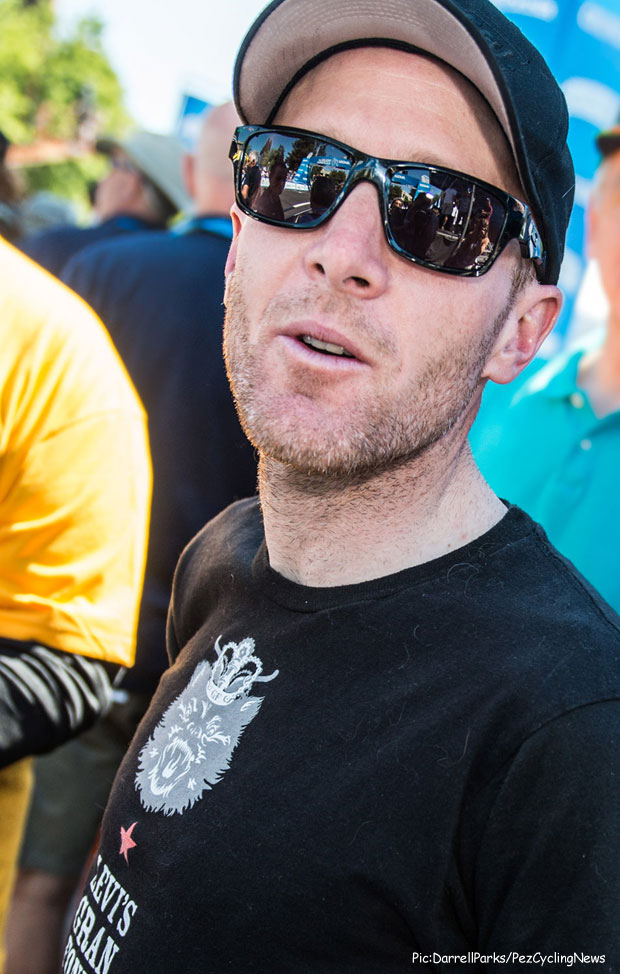 The future and the past of American cycling was on display in Santa Rosa with the confirmed now retired local Levi Leipheimer turning up to watch the race. 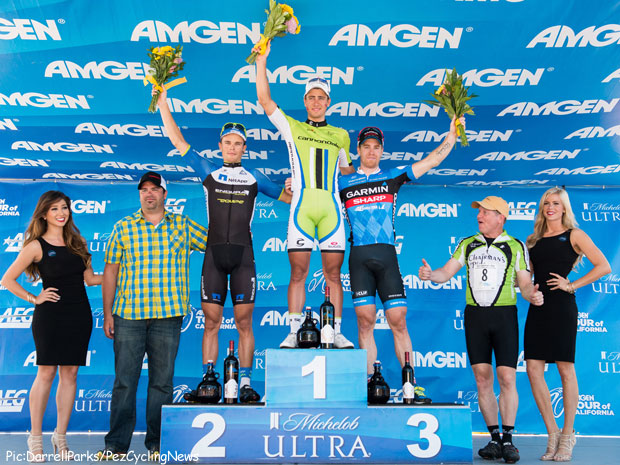 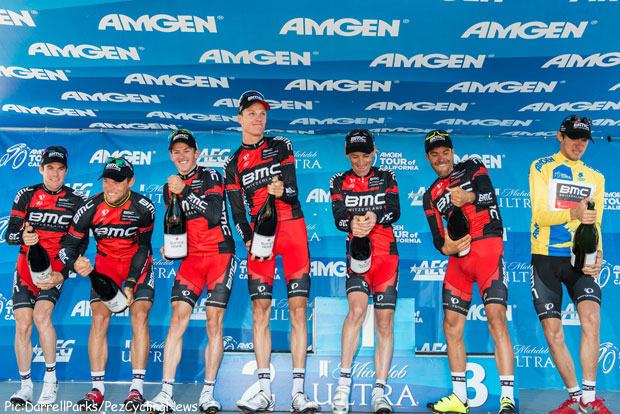 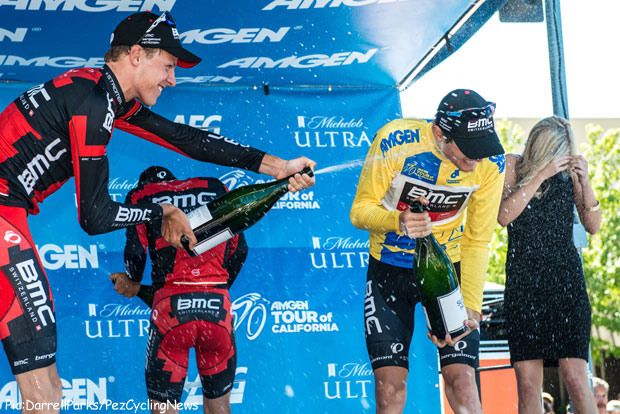 Daniela Schorn sprints to 2nd place at the Tour of California