We caught up with one of America’s most accomplished cyclists, Frankie Andreu, the director of the 5-Hour ENERGY presented by Kenda pro cycling team. Having just returned from the Tour of Mexico, Frankie was happy to talk about how racing has changed in 20 years, and what it takes to guide a pro cycling team today.

Pez: You’ve been a prominent pro cyclist since 1984. Much has changed. How would it be different if you were a pro rider today?
Ooh, man. Working with power would be a big change. And now there are specific coaches for each rider. Back in my racing days you went by ‘feel’ and did your own training. Maybe you had a coach, or the team had a coach that worked with everyone, but it was not as specific. And even then it was based on heart rate and that’s not as advanced as power. The coaching and training advice has evolved to be incredibly personalized. It’s not just training, it’s nutrition, everything. Taylor Phinney is rumored to have his own soigneur.

We also did a lot more racing. We raced to gain fitness, and then had some races which were objectives. Now riders are far more selective…a few races are goals for the season but they aren’t racing 100 days a year for training. In my days I’d do 85-100 races in a season, easy. Today it’s more like 50. What’s different though, is the way guys train now when they’re not racing, it’s extremely intense and focused, and every training ride is a test. You’re not slacking off even if you aren’t racing.

As for the racing scene, the crowds are crazy. There are more people watching and cycling has become mainstream. More people ride, it’s part of an ‘active lifestyle’ that more people seek. You see people riding everywhere now. 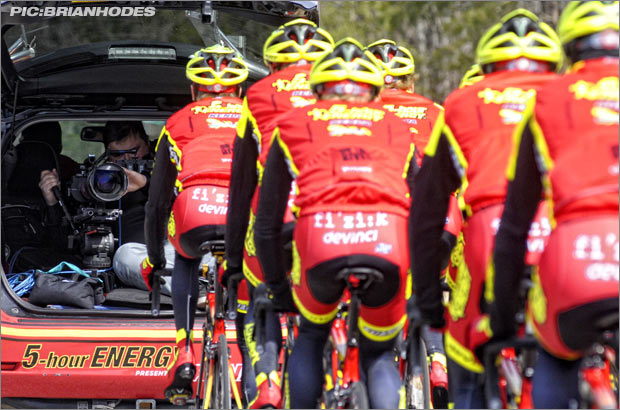 Pez: How has the style of racing changed?
Racing hasn’t changed that much. The elimination of race radios has made things more difficult for directors and riders. I like radios. I don’t think they dictate the race. They’re good for safety, knowing if a leader flatted, etc. When it comes down to it, the radio doesn’t tell you to chase an attack – that’s instinct. On the final climb or in the last 10kms, radio or no radio, the riders react to what’s happening.

The racing itself is as aggressive as it ever was. I don’t see much difference. It might be a little faster due to the specificity of training and some of the equipment, that helps athletes get faster and stronger. The biggest difference now is that when you show up to the start line, you better be fit, or you won’t finish. Before if you were 75% you could get through it and hide in the back. That’s how you could use racing as a training tool. Now you have to be ready or you’ll get dropped.

Pez: It used to be that all the legit racing was in Europe. Is that still true? How has US racing changed?
I think in a way that is still true. The U23 riders on the US National Team do some Europe trips and that benefits riders tremendously. That said, as an American rider you have a much bigger chance of getting a professional contract and having a career. The competition in the US keeps improving, and there are more foreign riders racing domestically. Six or seven years ago you didn’t see that. Now with UCI races in the US, a domestic pro team is playing with the big boys half the time. And the big international teams that show up for the Tour of California or the Tour of Colorado, they are really going for it and looking to win…it’s not training or a holiday for those guys.

The exposure is too great and those are large races. So as a US pro you can now get the sort of racing experience domestically that you used to have to race in Europe to get. For that reason, European teams now look at US riders much more closely. American riders like Ted King and others are everywhere now, and that says a lot for the USAC and the U23 rider development programs they’ve created. 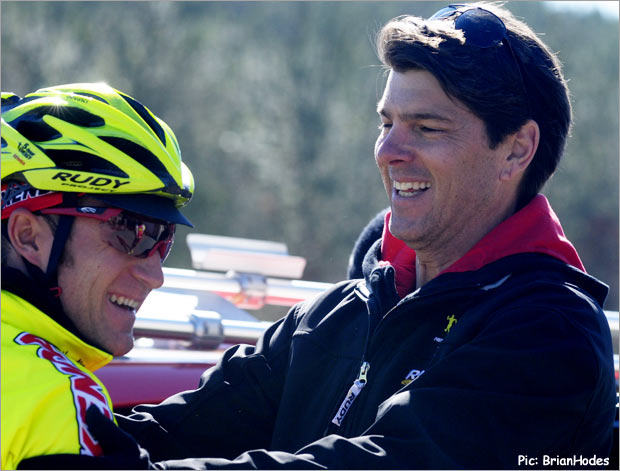 Pez: Having a sponsor you can trust must make a difference for a team.
It does. 5-Hour Energy has been great, very supportive with everything the team needs. And while the brand dominates the office space but it’s also a valid sports product – it pulls you through the haze when training and racing. The 5Hour Energy product has made a difference for the riders. 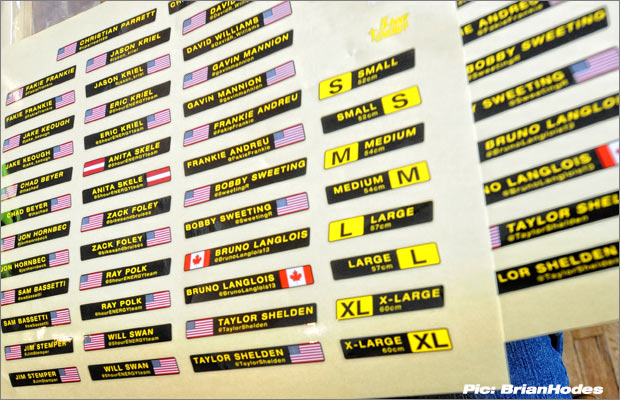 Pez: Jake Keough was a solid addition to the team. How does he change the dynamic on the team tactically?
Definitely. Before we were a GC team and somewhat one-dimensional. We have Chad Beyer and Gavin Mannion, two very good climbers, but now with Jake on board, we have a super-talented sprinter and with him we can focus on stage wins too. Sam Bassetti is there to provide some strong leadout help, which is something we didn’t have before.

We’ve only had one test so far, in Mexico. Jake got 2nd on the final day. It’s a good result but a lost opportunity, he had the speed. It’s coming along…Jake is used to the United Healthcare blue leadout train and there’s a way that Jake likes to do things. We’re in the process of figuring everything out. We have to learn how everyone rides and what works. It’ll take a few races for everything to come together.

Pez: What are the big races at the top of the team’s hit list for the 2014 season, and who’s going well?
Obviously we want results at the Tour of Utah, the Tour of Colorado, Nationals in Chattanooga TN, and then after that we’re off to Canada (our bike sponsor Devinci is Canadian) for the Tour de Beauce.

We’re excited about the year and what Jake will add to the team, and the opportunity to focus on stage wins and not just GC. We have some really talented young riders and look forward to seeing how they perform. Everyone wants the big UCI races, and this season there are fewer in the US. So we’re considering some races in Asia in the Fall.

Pez: You mentioned equipment improving. As a team director what do you look for in a bike now?
We look for a partner…a company that can meet our performance needs and that listens to our feedback to help improve future models. Specifically, we need a stiff bike that is dependable, reliable, and light enough to meet the climber’s needs as well as our sprinter’s needs. The Devinci Leo SL meets those criteria but it’s also comfortable. Devinci is a company with a great reputation in mountain biking and they have delivered on that reputation in the road market.

If the riders don’t say anything then you know you have a good product. It’s a bike that not only works for the pros but also for the everyday Gran Fondo riders or anyone who wants performance. Devinci have been great to work with and this year delivered a newly designed TT bike which we will use for the first time at Redlands. 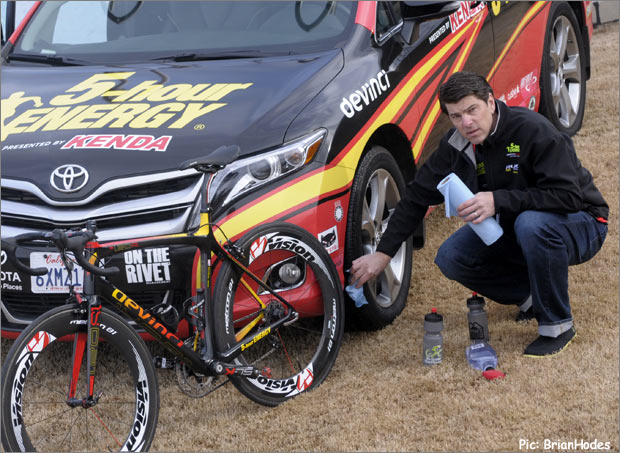 Frankie knows a lot about making a pro cycling team run right, and look its best too.

Pez: You’ve done some racing in your time. You’ve done it all in fact. What was the single most memorable moment of racing your life as a pro?
Riding in the 1996 Olympic Road Race in Atlanta. Representing my country and being part of an Olympic team on home soil was really amazing. I had a great ride too, one of the highlights of my career, finishing fourth. Of course I wanted a medal, but I could not have done anything more on that day.

Pez: What was the hardest moment?
There have been plenty of days of suffering, like Paris Roubaix. I finished in the bunch in some but crashed out in some. In the 2000 Tour de France, there was a 250km stage that covered Briancon and I did a bunch of hard work at the beginning, pulling up the first three climbs. I got dropped and could barely hang onto the main group. I was completely wiped out. At the finish, I couldn’t talk, couldn’t even get in the shower. But there were many days like that. 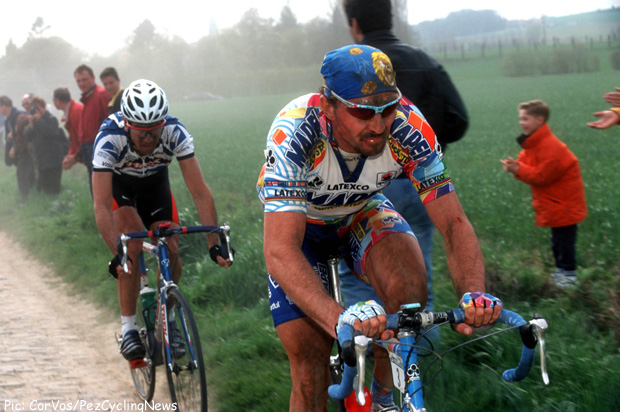 On the right wheel at the 2000 Paris-Roubaix, following eventual winner Johan Museeuw.

Pez: As a director of a handful of fresh pro riders, what is the most important thing that you apply to the team that you learned from being a rider yourself?
One thing I tell all the guys is that they are lucky to be on a professional cycling team. They had better respect and honor that. Show up at the races, be fit and be ready. Not everybody gets this opportunity. I get a ton of resumes every winter from guys who want this. Take advantage of the chances you get. This might not be forever, they have a precious spot and can only race at this level for so long.

Pez: What’s the biggest lesson or secret or tip you learned as a pro rider, something you have passed along to your riders or even something that mortal beings could benefit from?
Wash your hands! I swear…it makes a difference. All the travelling, moving around, shaking hands, there’s lots of chances to get sick. Washing your hands constantly really helps keep you healthy, and not missing the time off the bike. If you can avoid getting ill over the season that means you won’t miss weeks of training or racing, and that’s an advantage.

Pez: Thanks Frankie, and good luck!

You can keep up to date with Frankie and the 5 Hour energy team at their team website and check out their bike supplier, Devinci bikes here.

Popovych and Devolder to miss Scheldeprijs