Pro Diary: It’s been a while since our resident pro, Clément Koretzky has checked in but it’s been busy times – crazy breakaways, pushing hard for Tour de France selection, leading the break into the Areneberg Forest at Paris-Roubaix, punctures, crashes and more…

Hi everyone, first I’d just like to say sorry for the long wait between my last chronicles entry but as you’ll soon read things haven’t been easy for me since Paris-Roubaix…

First up though my results since the start of the season weren’t quite up to what I was hoping for – lots of good placings and obviously good form but no wins. With Tour de France selection on the line and in the minds of each of the 16 riders at Bretagne Séché Environnement I probably took the chance of going to the Tour de France too much to heart and I raced too aggressively and not enough with the head.

6th at the Ronde van Drenthe and 4th at the Route Adélie were good but looking at my results in seasons past and my hopes for better things this year it has to be said that things didn’t quite work to plan – but we can’t always get what we wish for!

The 6th at Drenthe was a good result behind a solid winner (Kenny Dehaes – LottoBelisol) but a great example of me racing way too agressively. I escaped right from the start with a group of 4 riders and then at the 100km mark another group of 15 came across after the terrible echelons forced on the peloton which is often the case in the Netherlands. The race then played out in the final 15 kilometers where understandably I paid for my early attack and four riders got away from the rest of us. We didn’t give up hope though and almost got them back in the last kilometer where I took second from the group. An example of my form being there as I was right in the mix in this Class 1 race but I left the race feeling disappointed to pass so close to a big victory.

The Adélie de Vitré played out in a completely different way (4th behind the winner Bryan Coquard – Europcar) where I had the feeling of heavy legs from the start of the race. I told my DS Emmanuel Hubert that I wasn’t on a good day and he asked me to go to the front and stretch out the peloton for the others, which I did but as soon as I finished FDJ attempted a big move and despite feeling bad and just having worked on the front I managed to hang on. My positioning in the peloton after doing the work was perfect as all of a sudden we were away in a group of 20 and fighting for the victory! 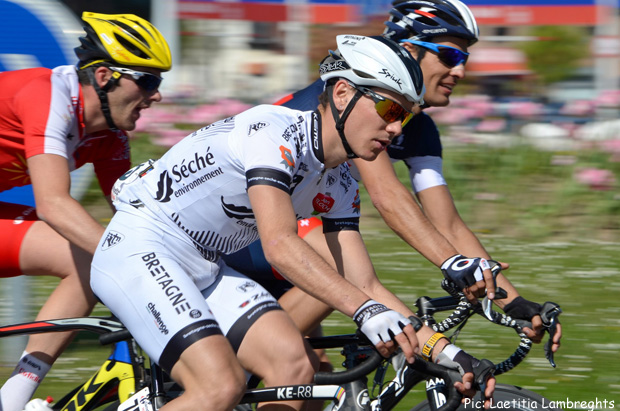 Fourth on a so called ‘bad day’ is good but again after analysing my race I was a little disappointed as I now think I could have done better….still that day I learnt a lot and I know that it’s not always when we have good legs we get the best results.

This now brings me around to the big one, Paris-Roubaix. After my breakaway there last year and heading into the Arenberg forest in the lead I was determined to get an even better result and I arrived at the race even more ambitious. Last year was the discovery, this was to be the year of confirmation. I learnt last year (you can read about Clément’s 2013 break here) that this is the most demanding of races both physically and pyschologically. It doesn’t forgive mistakes and any error of placement in the peloton or even the smallest loss of concentration could see your race over in an instant.

Being at ease on the cobbles and in good form this year I set myself the objective of a good final result but as per usual I found myself in the early break! I don’t know how to explain it because I know that other riders battle hard for the break and miss it but I caught it without really wanting to be in it this year. I tend to just read the race easily and have a ‘feeling’ for the good move and before you know it I was there. 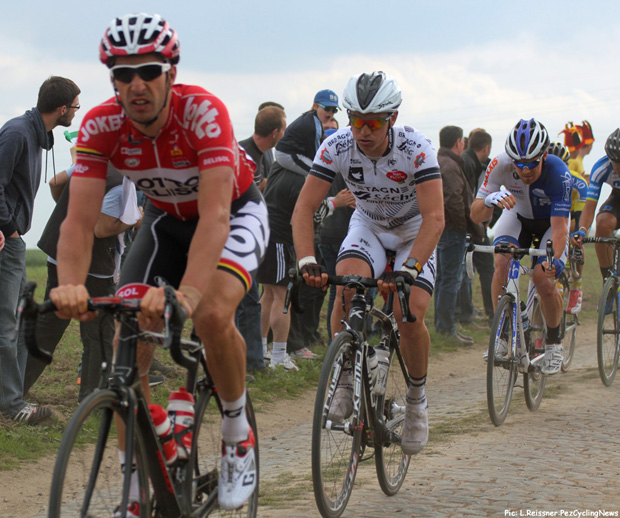 In the break at Roubaix – again!

Last year I made the same break but let the ‘big riders’ in my group hit the Arenberg forest first but this year that experience would be mine. I was floating on the cobbles, feeling great, we’d worked up a good gap on the peloton and I led the guys into the forest. Even writing about it today, months after the event I get goosebumps, the crowd, the noise, the cobbles, the media, the buzz – it’s magic.

Clément hits the Arenberg Forest in first place at 31m30s

Unfortunately after just 300 meters the magic stopped somewhat for me with a rear wheel puncture. I couldn’t believe it and I had to stop, wait too long for a change then get going again and do the whole Arenberg on my own – until just before the finish of the sector I punctured again! This time it was the front wheel and I decided to ride until the end of the sector and then grab a new bike as clipping in and getting restarted in the forest is something I’d experienced just a couple of minutes earlier and trust me when I tell you – it ain’t easy! 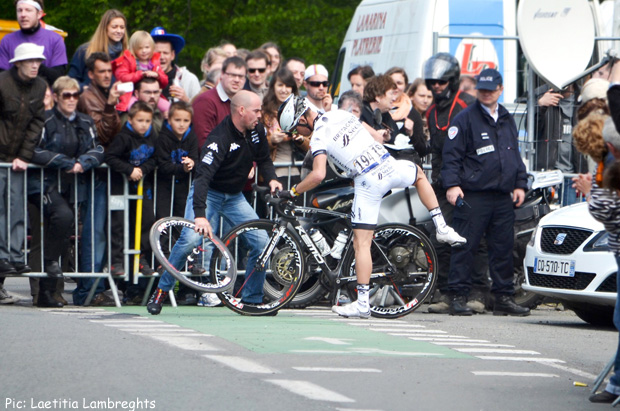 Disappointed, frustrated and just plain angry I took off again like an absolute rocket in the vain hopes of recatching my breakaway when 5km down the road disaster struck and I went flying off the road in a sandy corner. I went down hard, really hard and for several seconds I didn’t know where I was. I’d broken my helmet, lost my sunglasses and I had cuts, wounds and pain seemingly all over. 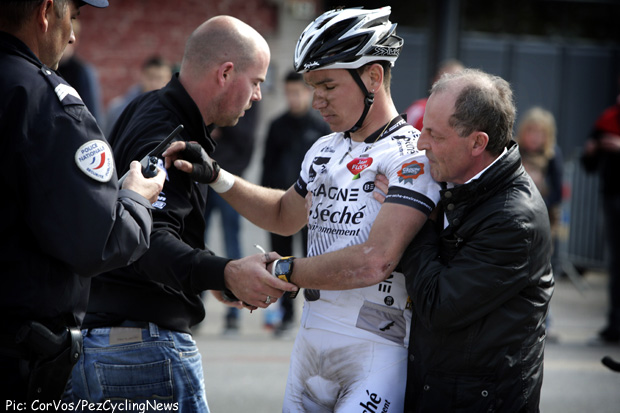 Still it’s Paris-Roubaix so I jumped back on and forced hard again despite my chances of a top placing being already over at that stage. Unfortunately due to me pushing hard after the crash I actually tore the muscle in my right thigh which would turn out to be a major injury. Result of Paris-Roubaix: 3 punctures, one crash, one painful injury and 102nd place @ 13m42s behind Nikki Terpstra – not what I was hoping for. 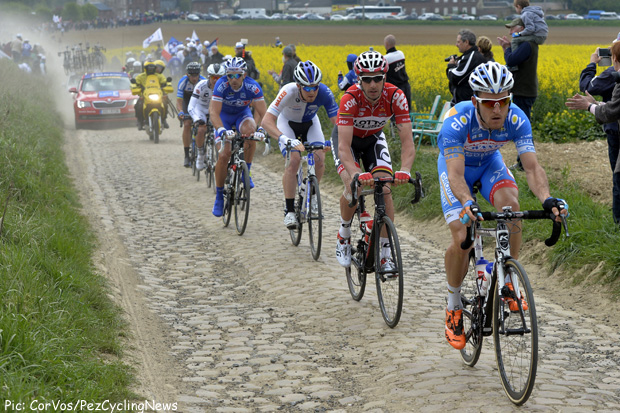 You don’t realise it at the time of course as you just want to ride again but the thigh injury actually became a big problem. After 15 days of rest though I didn’t have too much pain so I raced again at various races but I was never at my best and I had a feeling something wasn’t quite right. At the 4 Days of Dunkerque the pain was becoming unbearable so I decided to abandon the race after just one more stage and go and get some more tests done on the thigh. Still the day of the tests though I did the stage and managed to get into a 160km breakaway on the Queen stage….old habits die hard!

The long and the short is that these tests showed that I had torn the muscle and also had cracked the bone in my right thigh. It was difficult to hear but at least I understood why I’d gone from good form to almost 2 months of frustration after just one crash. So far this season I’ve learnt enormous amounts about being a professional rider. Just until this year everything had been smooth, I was making constant progress and things were going how I wanted them too. My motivation to race the Tour de France with my team was enormous and it led to silly attacks in races and wasting energy which wasn’t good for me nor for the team as I then wasn’t available to give the maximum for my leaders. I’m somebody that is happy to work for others and love being part of a good working team so it was silly riding by me as more often than not these escapes are doomed.

The crash and subsequent injury has led me to a significant down period in my career and the races that I did between Roubaix and my diagnosis gave me the chance to sit back in the peloton (most of the time!) and reflect a little. I saw that it’s in difficult times that you often learn the most and it was also great to have other riders in the peloton and my team come up and ask how my recuperation was going and support me and I thank them for that.

All the staff at Bretagne Séché have invested a lot of time in supporting me too especially our doctor who has played a huge role in my rehabilatition. At this moment I’m stuck at home with daily physio sessions and it’s not something I cope with too well. I miss the sport, the competition and the camaraderie in the team. Still, I have a very strict protocol of physio that I have to follow so at this moment this is the seat I spend time in instead of on the bicycle seat. 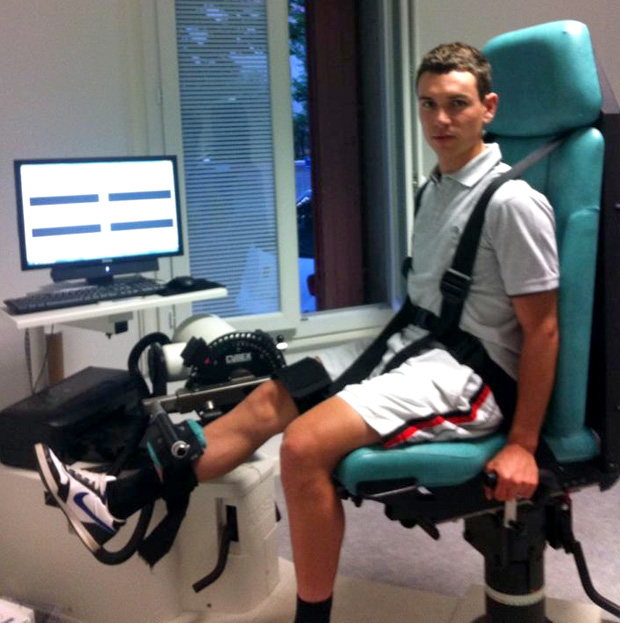 My physio takes about 2 hours a day and it’s not exactly how I wanted to be spending my summer time but I’ll be watching the guys from Bretagne Séché Environnment on tele at Le Tour and supporting them as loud as I can from home and I hope you will be too.

My first day back on the bike with very light work is actually going to be the end of this week with a possible return to competition at the end of July at the Tour de Wallonie. In the meantime I have the support of my girlfriend Laetitia and my family and friends and I hope to bring you some good news in my next Clément Chronicles edition later this year. 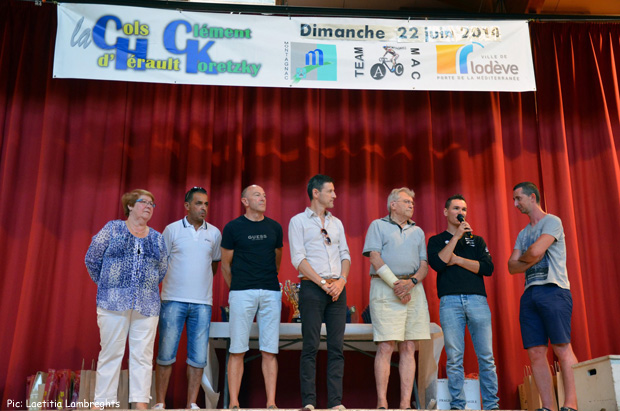 Me speaking at the Cols d’Herault last weekend

I’ve also been able to attend in person this past weekend and present the trophies at my own cyclosportive, the Cols d’Herault – Clément Koretzky which is a superb event taking in some of my magnifcent region of the Herault Valley. If you ever come to France to ride a bike make sure you come here – and even better, enter my event!