Pro Diary: A 24 hour voyage, experiencing a new country, trying to learn a language, a crash, a KOM jersey and a huge announcement that his team is going to the Tour de France. The first 6 weeks of season 2014 have already been action packed for our man inside the peloton Clément Koretzky as he explains in his latest diary. 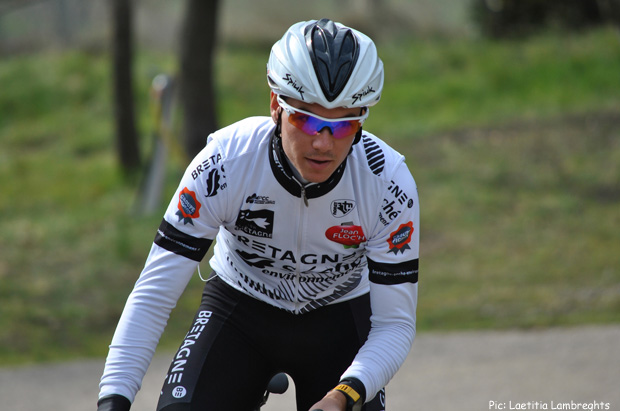 Since my last diary entry a lot has happened and the season is only six weeks old. It all started upon leaving my native Lodeve on a cold January day, direction Montpellier then Paris on the train for the plane trip to Santiago in Chili for a five hour transfer. From there it was another 1 hour flight to Mendoza in Argentina and then another 4 hours of driving to get to San Luis – 2014 was starting with some big kilometers – off the bike at least with more than 24 hours of travel!

On arrival it was worth it though with such a beautiful place but it was a tad hot – 45° Celsius – a full 40° hotter than where I’d just come from! We had two days to adapt to the heat and time difference before taking on Nibali, Sagan and co. so we used those two days wisely with just an easy 2 hour spin the first day and then more of the same the next but this time with a hard effort on a climb to try and deblock the legs after such a long journey. 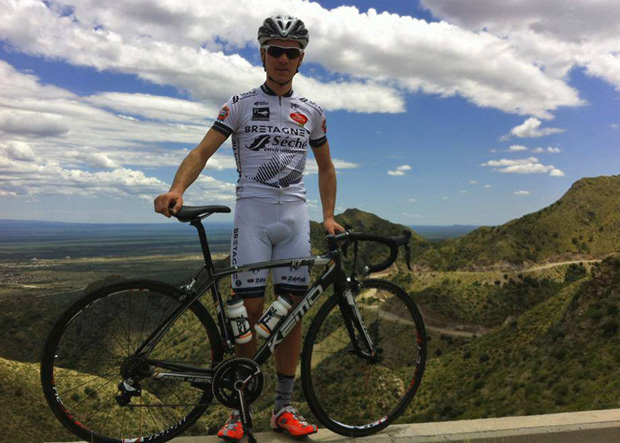 This was the first time in Argentina for me and also the first race of the year and I was really looking forward to it as I’d prepared well for the season and was hoping to put to use all the good miles I had put into the legs over the winter. On the first stage I was just crusing along easily in the peloton when the first break went just after the official start and it went all the way to the finish! Unfortunately for me and the team we didn’t have anyone in it and it was one of those rare times that the earliest of early breaks actually makes it to the finish.

The second stage I was determined not to miss out and I made my way into the day’s escape but we were caught 15 kilometers from the finish. Despite this I had good legs though and so I still went for the sprint at the end of the stage, taking 11th despite my efforts in the breakaway. This would prove to be the personal highlight of the Tour for me but even if I didn’t quite get the personal results I was looking for I was kept busy working for the team and following the team’s directives. For example we had our Argentinian rider, Eduardo Sepulveda well placed in the race and so we were understandably working for him (Ed: He ended up finishing a very strong 6th overall). 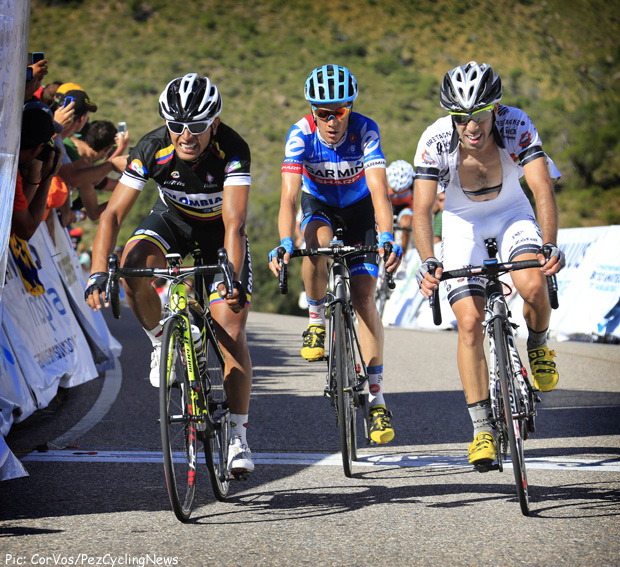 You may not know much about Eduardo but he’s a real rocket! He’s also a super guy away from the bike too and he was my roommate during the Tour. I think just now he’s starting to realise how talented he really is but he’s really humble and I like this behaviour in a champion like him. At his age (22) he’s really mature and I think that he still has a long way to go in terms of progression. He was previously at the UCI’s centre mondial du cyclisme and then a stagaire with FDJ before joining our team last year where he impressed me straightaway.

He came to the team at the same time as me and I’ve seen lots of progress in that time – both on and off the bike. Now he speaks excellent French but just a few months ago we were communicating essentially in English – although soon it may be in Spanish as he just started teaching me….although I still have A LOT of progress to make there!

The day of the time trial after I finished my race I was able to just hang out with the crowd a little and hear some Spanish – if not speak it myself when I came across this guy with his dog. I didn’t quite understand but it seems that both dog and owner were dressed the same for some reason! 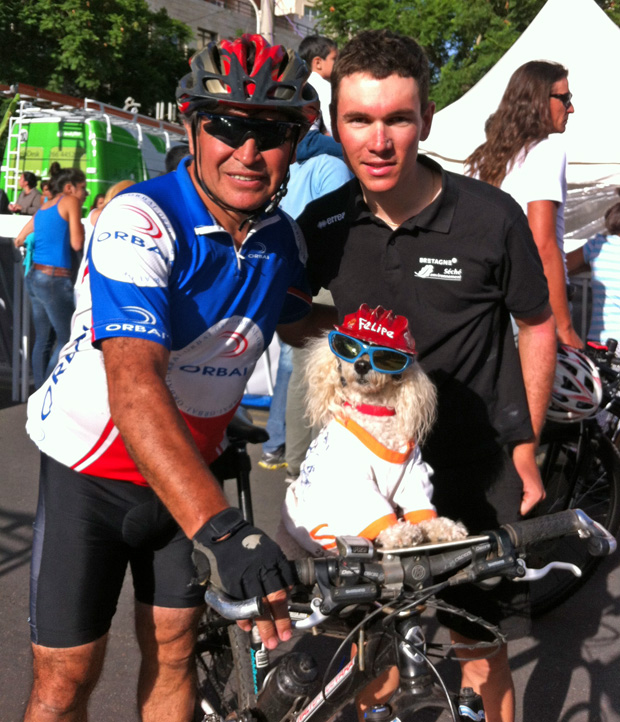 The rest of my Tour was all about protecting Eduardo with his GC ambitions and helping out a teammate with a good result is always fun – as was 99% of the Tour de San Luis in fact, although the second last stage was certainly a downpoint when I was involved in a crash with Vincenzo Nibali and Luca Paolini. If you’re going to fall I guess – fall with the best! It was actually a very scary experience and I broke my helmet in the accident but fortunately there was no real damage done to me and I was able to continue in the race.

After the last day of the Tour we were able to appreciate the pool and the incredible hotel that we were staying in and even share a drink with all the other riders from the other teams. There was a great atmosphere there with a show and Carnaval dancers and more before we had to come back to reality with a 5am leave time the next day for 24 hours of travel again, back to wintertime in France. 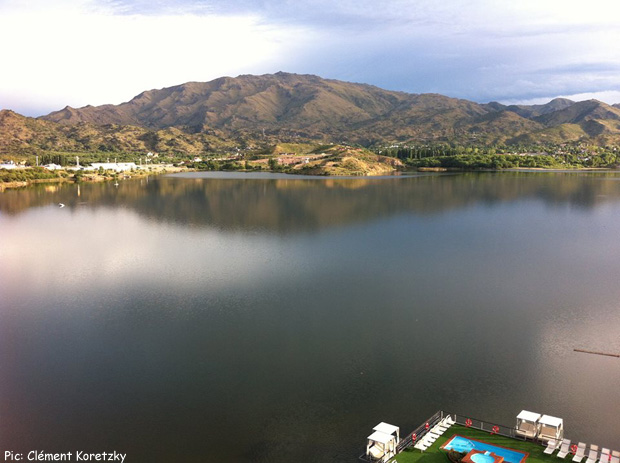 The view from the hotel.

On arrival back in Paris we met Joel Séché the boss of our big sponsor Séché Environnement and we learnt the incredible news that our team had been selected for the Tour de France! Everyone was of course super excited and this news has given me even more motivation to have a great season. 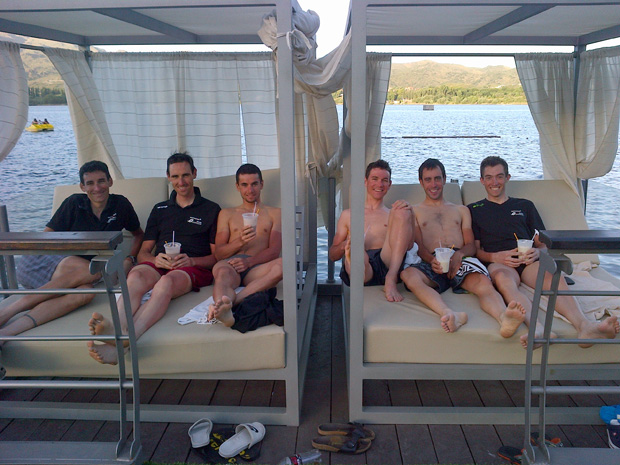 Sipping a drink poolside with teammates at the luxury hotel in San Luis. It’s hard to believe that life could get much better than this but then we got back to Paris and heard the Tour news!

It’s a boy’s dream of course to ride the Tour de France and this dream has now got that bit closer for me. Of course the road is still long to the Tour de France: the results are neeeded to get an eventual selection……but I have to say I have a HUGE need/want to be there but I know that I have to be patient, the season is long.

Racing In France
After the highs of superb racing in Argentina and the Tour de France news my first races back in Europe were the Grand Prix de La Marseillaise and the Etoile de Besseges in France. I rode a very attacking race in the Marseillaise but then got crowded in at the end and missed the chance to sprint to eventually finish 51st but the sensations were good. 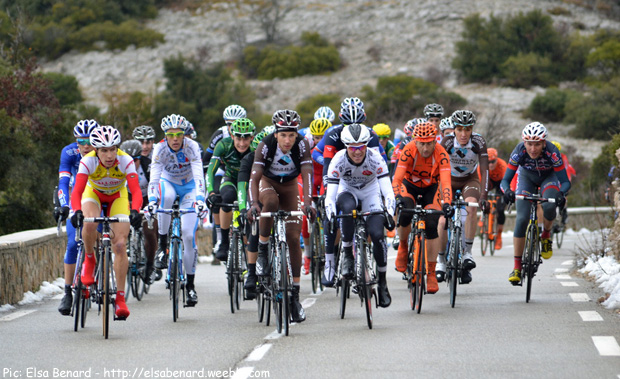 That’s me smiling on the front!

It was then off to Besseges infront of my family and my supporters as it’s not far from my region so my motivation was sky high. I got away on the second stage but with no success to then try again on the 4th day where I was eventually caught at the 1KM to go banner! 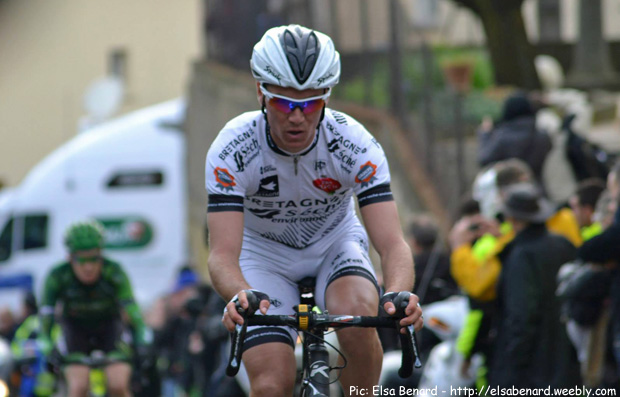 On the attack in Besseges

It was a bit unlucky and disappointing to get caught like that but my efforts moved me up into the top 10 on GC with only one stage to go and into the climbers’ jersey. At the start of the race the jersey was certainly not an aim but I’m an attacking rider and thanks to my break on the second stage I already had some points so I made a goal of grabbing as many points as I could during the 4th stage.

I still have a really sour taste in my mouth from getting caught with just 1km to go as I’m sure that if we’d have worked better together then we would have got to the finish. I’d have then been a very good chance of taking a stage win which is always my no.1 goal; Still a climbers’ jersey against top competition and ahead of none other than the French champion, Arthur Vichot (FDJ) is still a nice result. 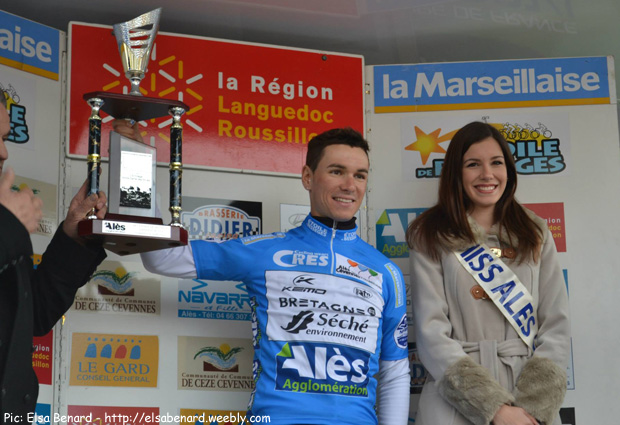 Enjoying my time on the podium – next time a stage win!

There was still one stage to go though and I was in the top 10 overall but it was a time trial and I think my efforts in the breakaways killed my chances a bit and I faded to 40th overall but still happy to go home with the climber’s jersey. 40th certainly wasn’t quite the result I was looking for but I’m confident that the results will come as the form is there. The race itself was another excellent one for the team with our sprinter Benoit Jarrier finishing in 4th overall after being well placed all race and the team in general has been prominent in every race so far that we’ve been in. Time now to turn those attacking efforts into some big results.

Ed’s note: With thanks to Laetitia Lambreghts and Elsa Benard for the photos. Keep it tuned to PEZ throughout the year for Clément’s diaries as he takes us inside the pro peloton and if you want to follow Clément even more and maybe practice some French at the same time you can check him out at his facebook page.