Xavier Florencio, who? I hear you say! Well he pulled off the biggest win of his and his team’s life in a very hard fought Clбsica San Sebastiбn. The stars tried their hardest, but this little fish took the honors.

Spain’s big one day classic, the Clбsica San Sebastiбn, is held over some of the most beautiful roads in Europe, not exceptionally mountainous but very hard, never a sprinter’s race, but usually catering to Tour riders with a bit of form left or riders aiming for La Vuelta a Espaсa in a couple of weeks. There are many top riders here today; ProTour leader Valverde (Caisse d’Epsargne), Leipheimer & Rebellin (Gerolsteiner), Hincapie & Savoldelli (Discovery), Freire & Menchov (Rabobank), Perdiguero (Phonak), Evans (Davitamon), Sastre (CSC), Vinokourov (Astana), Bettini (Quickstep), Di Luca & Garzelli (Liquigas), Cunego (Lampre) and Zubeldia and Mayo (Euskaltel), I feel sorry for the two little teams, Relax and Kaiku as they will have their work cut out for them.

Last year’s winning team, Saunier Duval, have David Millar as No. 1, a little ironic as this is where he said he came to buy his EPO a few years back, well that’s all behind him now so I’m sure he’ll be out to show his sponsors what he can do.

The race course follows the coast road before turning inland to start the main climbs, the decisive climb of the race is the Jaizkibel at 194 kilometres, then the smaller Gurutze at 210 kilometres with the finish 15 kilometres later, a hard finish for anyone with anything left in their legs.

OK let’s see what happened, the little Spanish team in pink, Kaiku sent Yon Bru up the road, first with a little group, then on his own, at the top of the Udana at 100 kilometers covered he had built up a lead of over 15 minutes, the Kaiku team might be small but they are attackers, personally I’m glad it was Bru and not his team mate, Antonio Berasategui Saez De Zuazola as Yon Bru is so much easier to type! Home team, Euskaltel-Euskadi started to chase, helped by Milram for the revitalised Mirko Celestino. At the sprint at Tolosa Bru’s lead was down to 8 minutes 42 seconds and 140 kilometres had been ridden, Bru’s lead was getting smaller and the peloton was starting to smell blood as the big climb of the Jaizkibel is in 50 kilometres. Euskaltel and now CSC are on the front of the main bunch as Bru is struggling to stay out front.

The real race begins.
Yon Bru of Kaiku is caught after 125 kilometres and the race is about to hit the Alto de Jaizkibel, top riders are starting to move to the front, noticeable are Bettini (Quickstep), Evans (Davitamon), Boogerd (Rabobank) and also Schleck and Baguet. As they hit the bottom of the climb Sastre (CSC) attacks, Ricco of Saunier gets across to him, behind Cunego (Lampre) is on the front as Mayo (Euskaltel) along with Schleck (CSC) join Sastre and Ricco as Menchov (Rabobank) makes it five in the lead. Others try to cross but Sastre, Mayo and Menchov have flown and the others are going back to the 40 strong bunch. 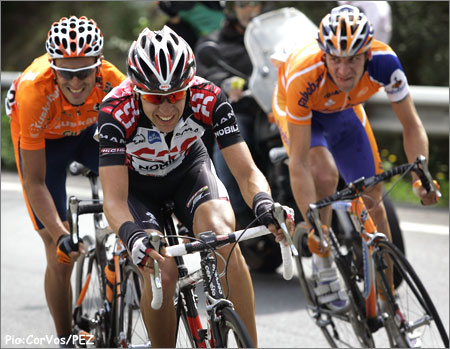 Sastre, Menchov, and Mayo put up a damn good fight to nearly hold off a very motivated chase behind. Unfortunate. How about Mayo though?!?! Impressive riding from Mayo of late, perhaps the Vuelta? Could this group be the Vuelta podium?

The Top Of The Jaizkibel.
The three leaders, Sastre, Menchov and Mayo come over the top with a slight gap of 20 seconds over a group of 25 which includes Valverde. The others in the race look like they have had it and are spread all down the climb. At the bottom nothing much changed, the three had a lead of 23 seconds with 23 kilometres to the finish and the last climb of the Gurutze still to cross, Valverde has Karpets to help in the chase along with Celestino (Milram), Kashechkin (Astana), Nibali (Liquigas), Arrieta (Ag2r), Petrov (Lampre), Castano (Kaiku), Yakovlev & Vinokourov (Astana), Schleck (CSC) and a few others. 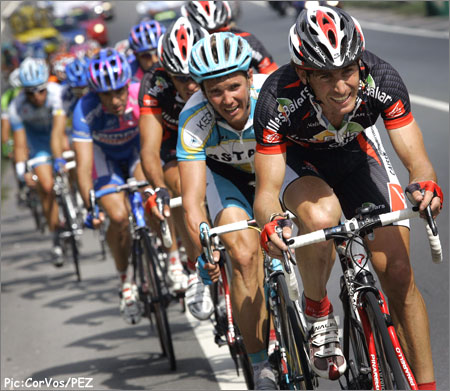 The pace in the bunch was damn near ferocious on the run in to San Sebastian as Caisse D’Epargne raged. Too bad Valverde couldn’t come up with the expected goods.

At the top of the Gurutze the three have 19 seconds on the group of 25, but now the chase is on and they can see their prey on this wide run in to San Sebastian, Menchov looks to be the strongman here, but the others are having a hard time and can feel the group breathing down their neck. It was a nice try but not good enough as they are caught with only 5 kilometres to the line. It’s a group of 35 riders fighting it out for the finish, many attacks come on the run in, mainly from Viokourov, but Valverde and his team contain all of them, including Bruseghin, Schleck and Kashechkin, all brought to heel. 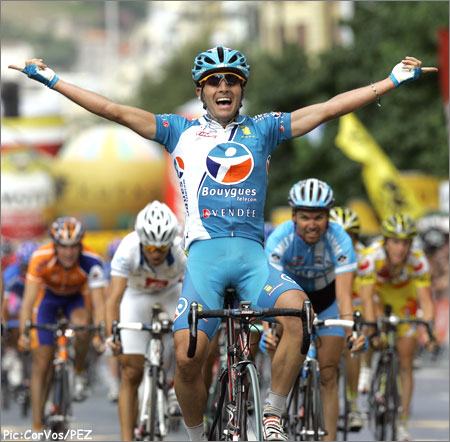 That’s a way to ensure a fat contract for 2007…winning a ProTour one-day race = job security.

The Gallop For The Line
Liquigas rider Pellizotti led things out for his man Garzelli, this looked like it was going to work as Valverde was not near the front, at around 200 meters to the line a Bouygues Telecom Jersey flashes out to take the win, Xavier Florencio beats Garzelli and all the others for a surprise win in front of a lot of very good riders, Hincapie managed ninth, one place behind Valverde, Celestino was sixth, so this is a BIG win for Florencio and for Bouygues, probably their biggest ever! 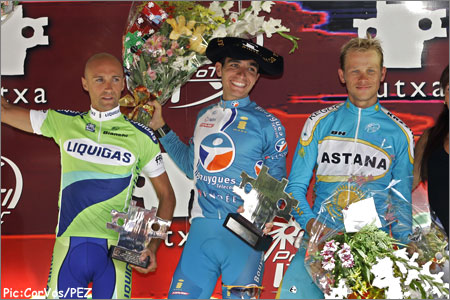 An impressive podium as a whole: Florencio with an incredible first win, Garzelli with an excellent runner-up to remind everyone that he’s still kicking, and 3rd from Kaschechkin who is getting closer and closer to the big win.