A lot of you might know the Club Ride brand from their years of making the mtb crew look better off and on the bike than a most will admit. I first saw them back at Interbike , and the Rail jean, Vibe short, and Ray jacket have landed here at PEZ HQ.

RAY JEAN – $129.00 – Raven color only
On display in Vegas was a booth filled with tops – shirts and jackets, and bottoms like casual riding shorts for men & women, but what really caught my eye was from the waist down on that mannequin at the center of their booth – I’m talkin’ jeans, baby. 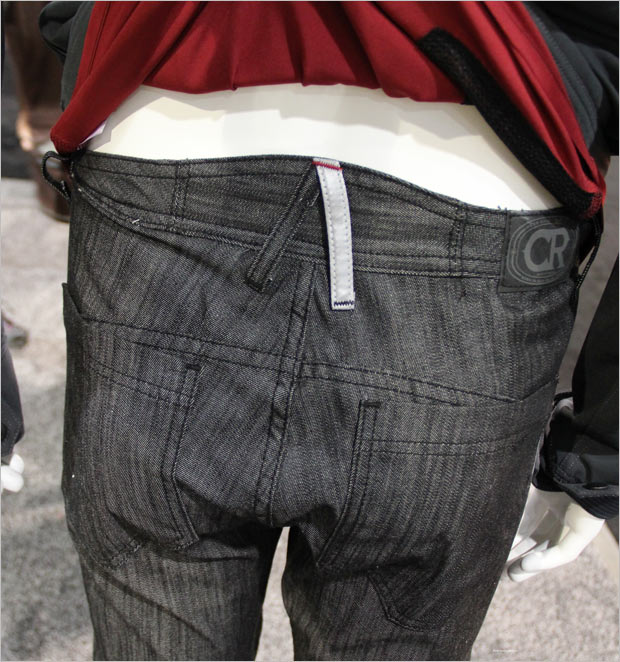 They call it their “Ray” jean, and this was no regular bike show item – where was the lycra? Where was the chamois? (Okay – it turns out the lycra was actually woven into the fabric.) Closer inspection revealed a most unexpected find – actual denim jeans, designed and built to actually ride your bike in, but so stylish and cool looking that the it was clear these are best suited as something to wear daily (words Club Ride lives by, and which happen to be stitched into a tag on every garment). 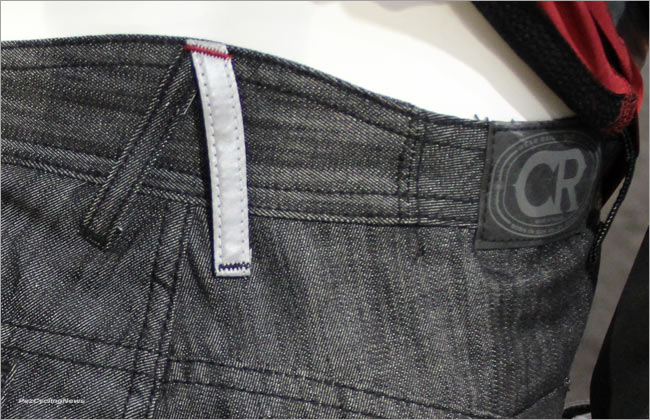 • The back of the jeans features the ‘No crack back’ – I’m thinking Club Ride needs to partner up with the Plumbers Association on this one.

Let’s face it, unlike our European counterparts, the North American male has never been known as a stylish dresser, and while our cycling egos call for matching, perfectly fit togs from head to toe, our off-bike alter-egos often languish in the “just don’t give a damn” bin.

• Buttons are solid – heavy enough to stand up to daily wear, but not so big as to out-weigh the fabric. That’s a detail that tells me there’s more thought here than meets the eye.

Make no mistake, the line isn’t aimed at fashionastas, as the fabrics and colors aren’t wild or flashy, but there’s enough low key detail that even that guy who doesn’t know a cool pair of jeans from crap (or care) will end up looking better than he ever knew he could.

The Ray jean is cut like the Euros have been doing so well for years – slimmer and in line with how a cyclist’s body is shaped. The denim is a lightweight – they use an 8 oz. versus the standard 12 oz. we see in regular jeans. The material is also woven with 2-3% lycra, which adds a really nice amount of stretch that’s barely noticeable except that these jeans just feel more comfortable than most. 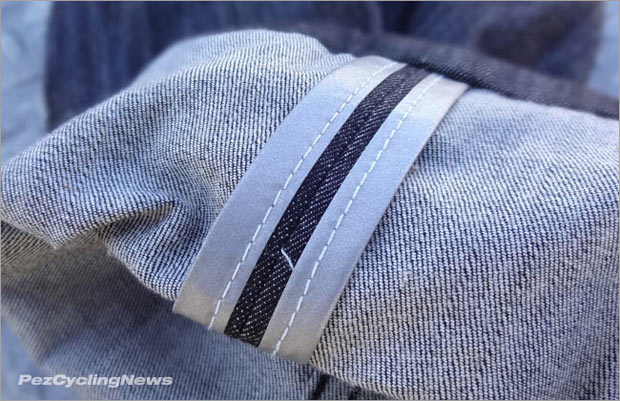 • Inside the drive-train side cuff is a cool reflective strip – that’s handy visibility for a dusky ride to the pub.

Their smallest size in the line is currently a 31 inch waist – and as a guy who pays attention to these sorts of things, I’ve learned that for me 30’s are usually as big as I can go. But I was surprised – these fit me so close to perfect, that I’d guess a lot of guys will love ‘em as is. That little bit of stretch helps them stay in place where other jeans of heavier weight would end up slipping down and turning me into one of those saggy crotch dudes that populate the “urban garage” section of the Interbike. 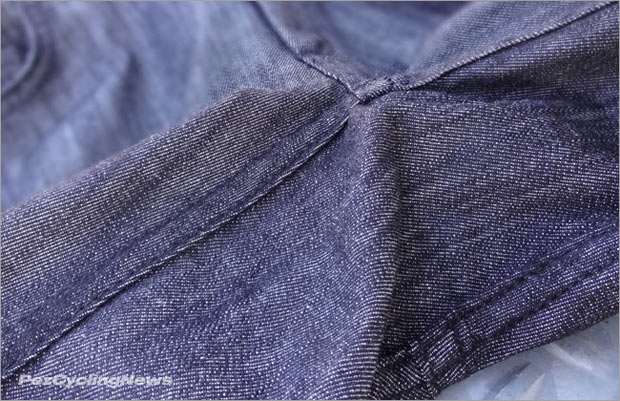 • More smart thinking that proves the design is for riding – the seamless inseam gusset runs up one leg and down the other – and right though the crotchal area – which should make your saddle feel better than your other jeans do.

These are pants for men who appreciate a cool look and attention to detail. The cut is lower in front – which not only looks better on most of us, but is also functional as there’s less material to get in your way should you choose to take a spin.

Legs come in a standard 34” length which will cover most legs, and they’re pre-shrunk. I still washed and tossed mine in the dryer before getting them hemmed – hey they’re still denim and likely to shrink a bit with repeated washings. 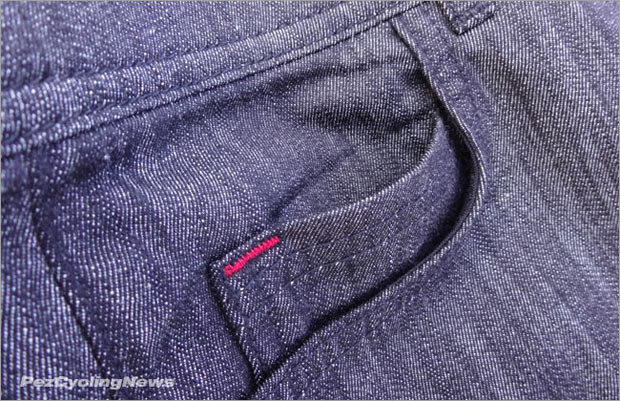 • What self-respecting man would choose jeans that didn’t have one of these? 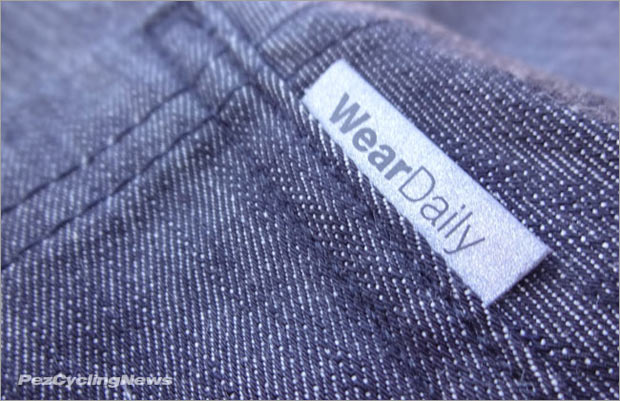 In addition to the standard five pockets we expect on jeans, there’s a zippered pocket strategically placed behind the left leg that’s designed for a phone or some cash. My iphone was a tight squeeze though, so I’m hoping they make it a bigger in the next run. 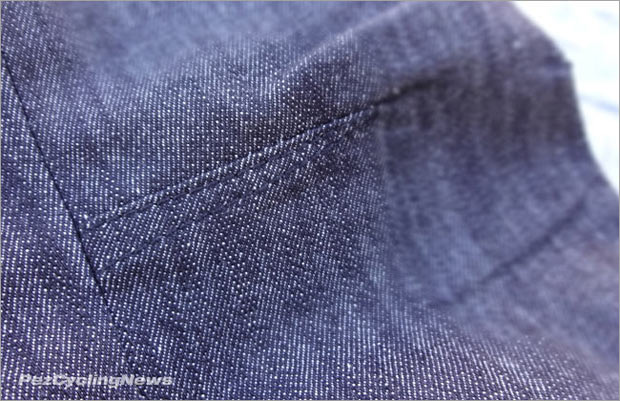 • Articulated knees shape the pant to your natural stride, eliminate some mid-leg bagginess, and add to pedaling comfort.

I’ve been getting a lot of wear from these jeans, and they’ve quickly found a place in the top tier of my weekly rotation – they’re definitely worth a look.

VIBE SHIRT – $90.00
This one’s new for 2013 and another in their Sub 5 line of urban style apparel. My tester came in Indigo Devo plaid (navy/khaki – the other is a black/gray combo), both colors are subtle enough to let you make your own scene but add a little pizzazz to a solid bottom like jeans. 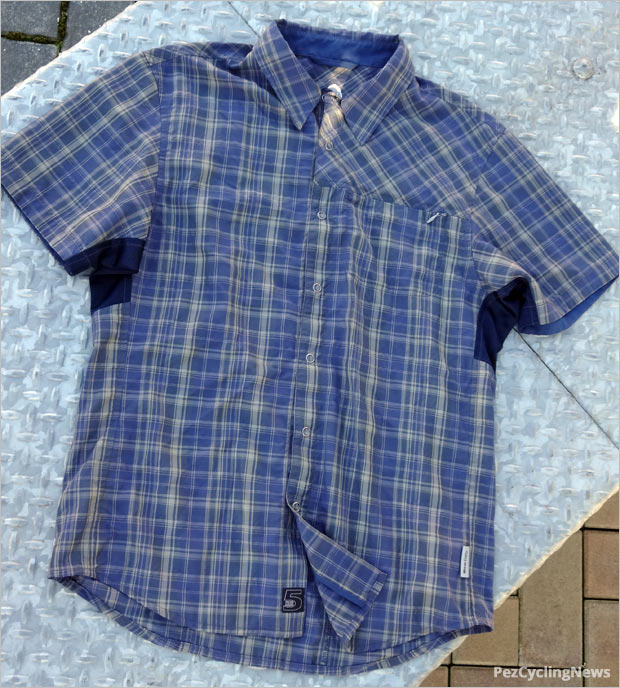 The fit is more stylish, trim and hip than I’ve come to expect from established makers of off-road off bike gear, but this modern take says as much about the brand as it does the garment, and like the modern look of the RAY jean, it’s a welcome departure from the norm. It’s not uncommon that I’ll be swimming in anything cut to North American standards, but it’s clear the guys at Club Ride are paying attention to modern tastes and giving men some decently fashioned choices that look better because they fit better.

Outta the box and into my hand this shirt was noticeably lighter than I’d expected – my size small weighed 142 grams. There’s some nice attention paid to their technical fabrics (they list 6 on the website). This one’s called “RideDryWear™” and is a lightweight dry-wear poly lycra blend that’s more durable and wicks moisture better than cotton, and offers better repellency of dirt and junk. Part of what keeps you cool is the general lightweight of the fabric, but also the generous mesh gussets under the arms really aid in cooling and airflow. 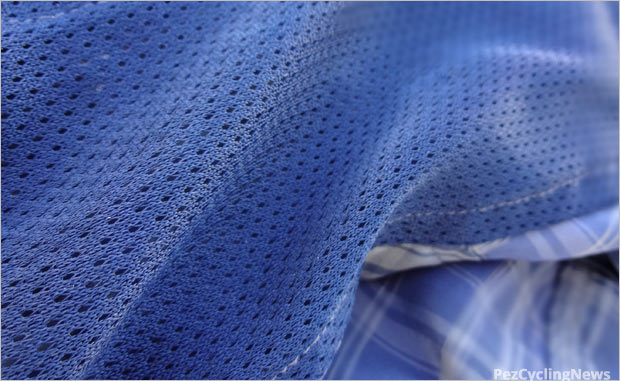 There’s some big venting under the arms. And it works.

I tested mine in February – but flew to Mexico where I could actually get some decent temps of around 80F degrees. The performance was impressive – I tested the airflow on the RideDryWear fabric by holding it up to my mouth and blowing – and could certainly feel some resistance from the tightly woven fabric. But the under arm vents & light weight really did a good job of keeping me cool and dry – I did not expect it. 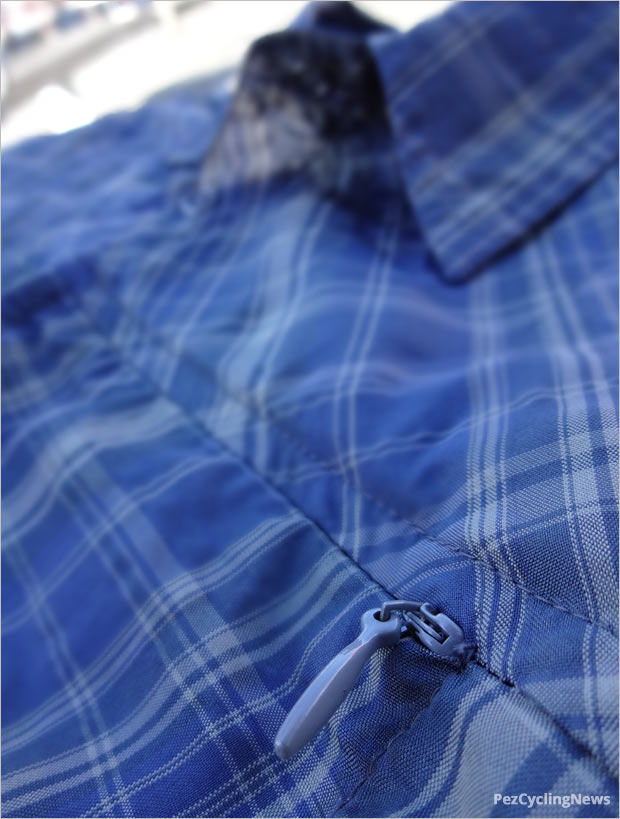 The hidden zip on the chest pocket is a cool detail.

Even better though, was wearing this thing at the pool, and on the beach chasing my girls around, and I never felt overheated from the shirt at all. There’s some nice durability in the fabric too – it’s easy to clean (chuck it in the wash, tumble or hang it dry), and is so light it folds up real small for travel. 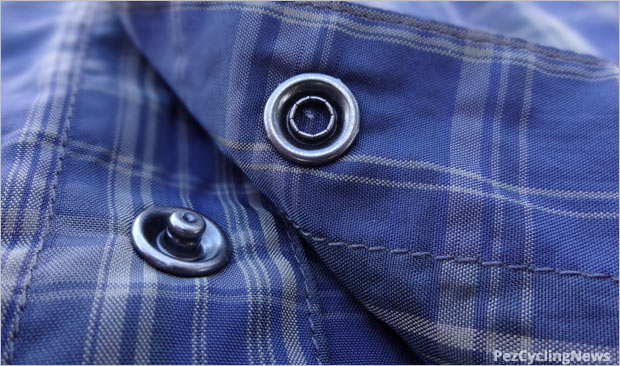 Other details stand out too – the solid snaps where you’d expect buttons lend a practical and sturdy feeling to the shirt, there’s a zippered breast pocket that hides out of view and another larger zipped pocket at back left that’s also a good place to stow your phone or some cash for the post-ride cold one. 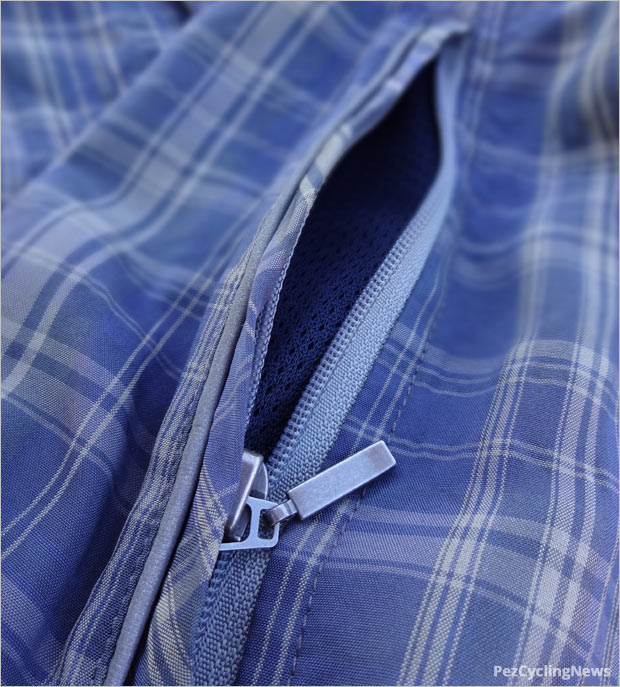 I can see this shirt getting a lot of use by anyone who’s active (certainly good for some urban style riding), but wants and appreciates a look beyond traditional bike gear, and at $90 it’s good price for better quality.

RALE JACKET – $165.00
Here’s a bomber-style jacket that could get you through a technical ride with no probs, but has too much casual cool to limit it to just wearing on the bike. 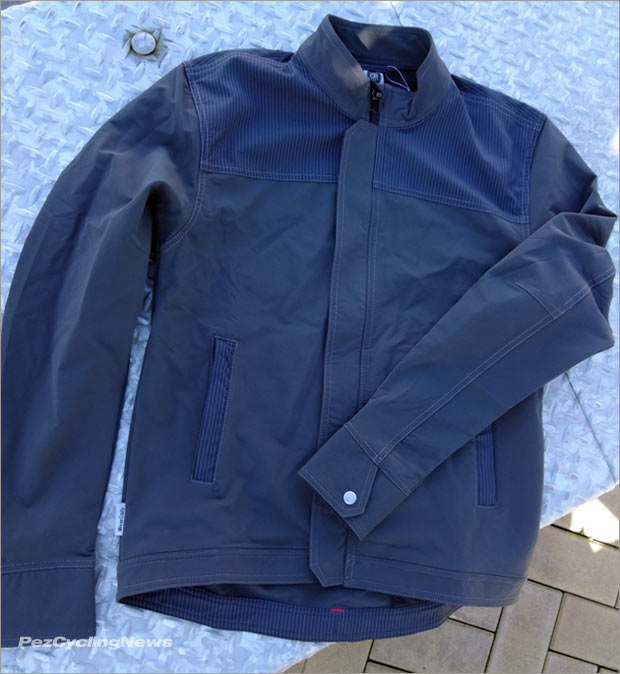 The Rail jacket is basically a cycling garment ready to wear off the bike, and vice versa.

It’s made from a “Stretch Ride 9” fabric that’s a breathable softshell, and cut for a balance between riding and an upright position. It’s longer in back for riding coverage, and features a nice stand up collar that fully zips – no doubt inspired by some brisk days in Sun Valley where Club Ride is based. 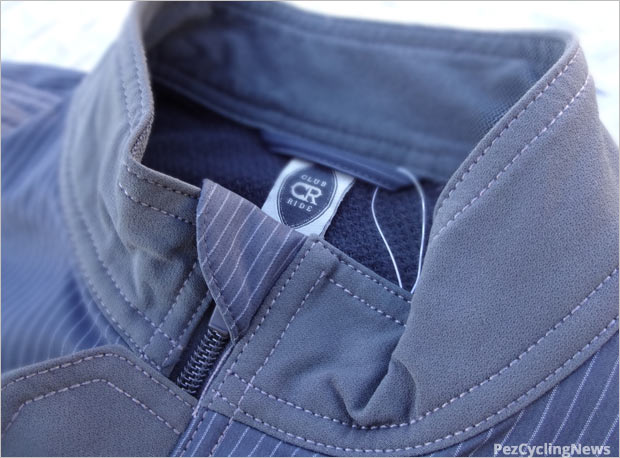 There’s a water repellent coating in the fabric so a bit of moisture (or a spilled cocktail) will be nothing to worry about, and the toss in the wash cleaning eliminates any other concerns about easy maintenance.

The sleeves are a snug fit, especially below the elbows, which keeps the air from blowing up yer cuffs, and the stretch fabric allows you to pull it over longer sleeves underneath with little concern of ‘elbow-bunch’. 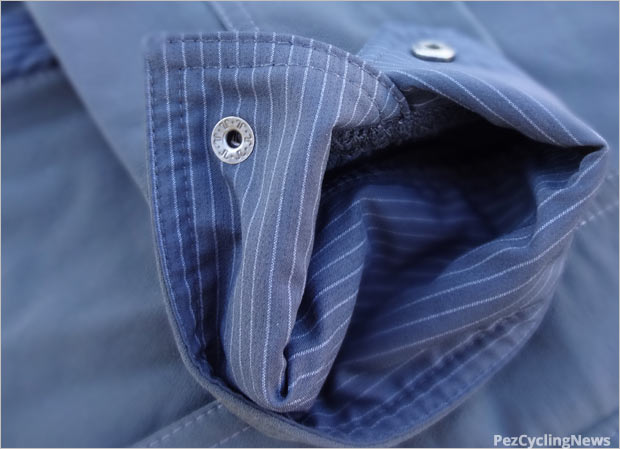 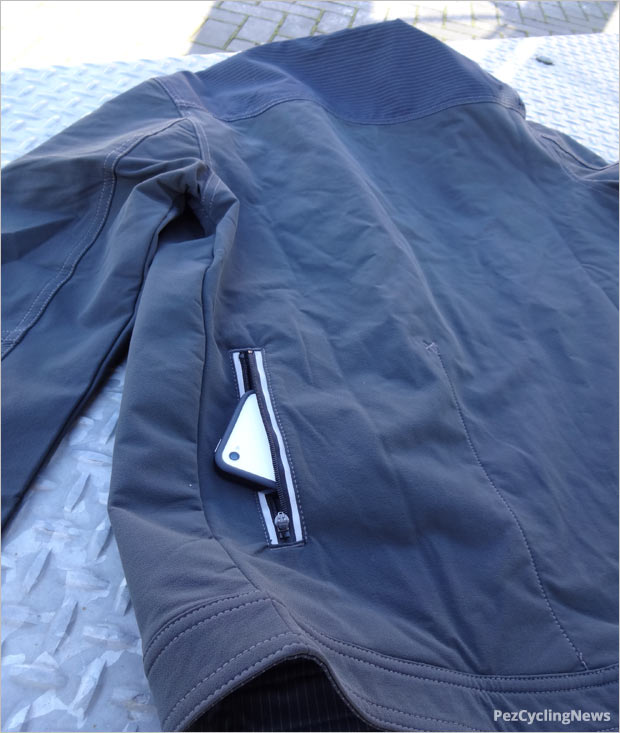 There are three zippered pockets – two on the side and one in back which makes a secure space for the phone, but my iphone coulda used a bit more room in there. 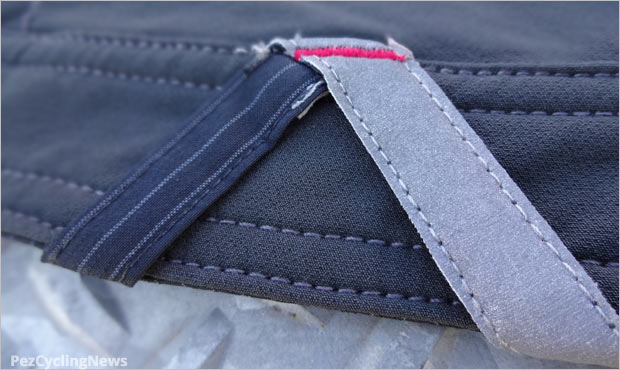 Just like the jeans and shirt, the jacket shows off discreetly placed reflective bits that both enhance the visual detail, and safety. 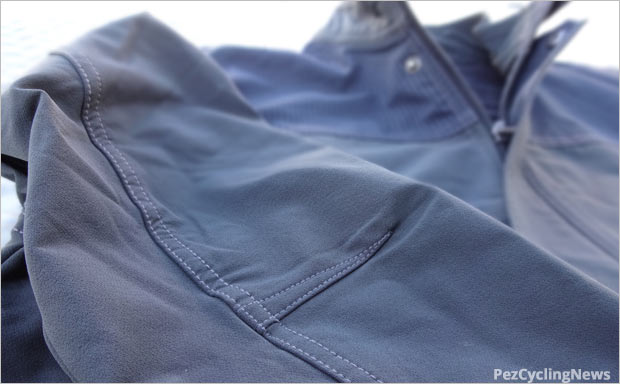 The articulated elbows are clearly designed for cyclists and trim down the bunching in the arms. 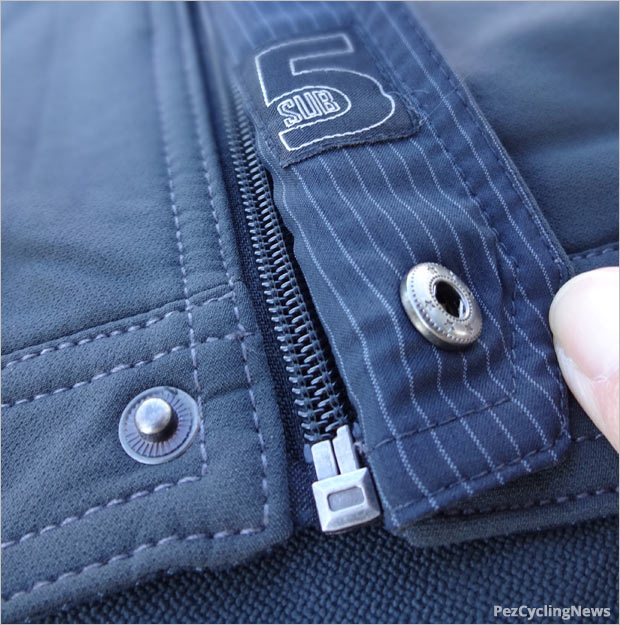 The front zip gets a solid flap to block the chill, and snaps solidly into place.

Overall some pretty cool kit that’s got more than a little thought behind it. All three garments have help up nicely for me after 3 months of testing, and they’ve got a bunch more designs at their website.

Get yourself a closer look at ClubRideApparel.com.

LIEGE Preview: This Is Gonna Hurt