This is cool – American builder of hi-end hand-built aluminum bikes, and famous tandems – CoMotion Cycles, has been immortalized on a postage stamp – in Bulgaria of all places. Yes Bulgaria – think Black Sea in central Europe… okay – get a globe and look it up.

How did a bicycle made in Oregon end up on a Bulgarian postage stamp? 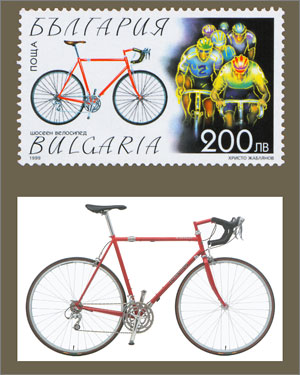 Answer: According to Company Sources:
Co-Motion Cycles, a bicycle manufacturer located in Eugene Oregon recently received a Bulgarian stamp, picturing a Co-Motion Espresso Co-Pilot racing bike. The stamp, one of a series of four cycling themed stamps, was sent to Co-Motion by Steve Smilanick owner of S&S Machine, of Roseville California.
The stamp originally came to the attention of Smilanick because the bicycle features a unique travel coupling system that he invented and manufactures for bicycles. After some checking on the image’s origin it was determined that, even though the bike’s decals had been removed by the artist, it was a bicycle made by Co-Motion, the world’s largest manufacturer of S&S coupler
travel bicycles. Apparently the stamp’s artist found a picture of the
bicycle on Co-Motion’s web site and used it as a model for the Bulgarian stamp issued in 2000.

Co-Motion Cycles is a Eugene Oregon based bicycle manufacturer and has been hand-crafting performance tandems and single bikes since 1988.

Keep you eyes peeld right here for a full-on PEZ-test of the Co-Mtion Ristretto in the new year.

For more info on Co-Motion, vist their website at: www.co-motion.com. Ask for Kent Peterson, Director of Marketing, Co-Motion Cycles
541-342-4583

RACE BREAKDOWN: What Does the Clásica San Sebastián Tell Us…