Rocking & Rolling At The Copenhagen Six

Copenhagen Six Day 2014: With five riders to look after as a runner at the Copenhagen Six, Ed Hood had his work cut out for him but he still had time to rock out to the music, take a few photos and soak up the atmosphere from inside this famous race.

This is Ed’s second piece from Copenhagen after checking in from the first two days here.

Day 3:
But let’s start with day 4: The Bat Signal lit up the sky above Ballerup Arena on a grey Sunday afternoon – within minutes the Caped Crusader had arrived. 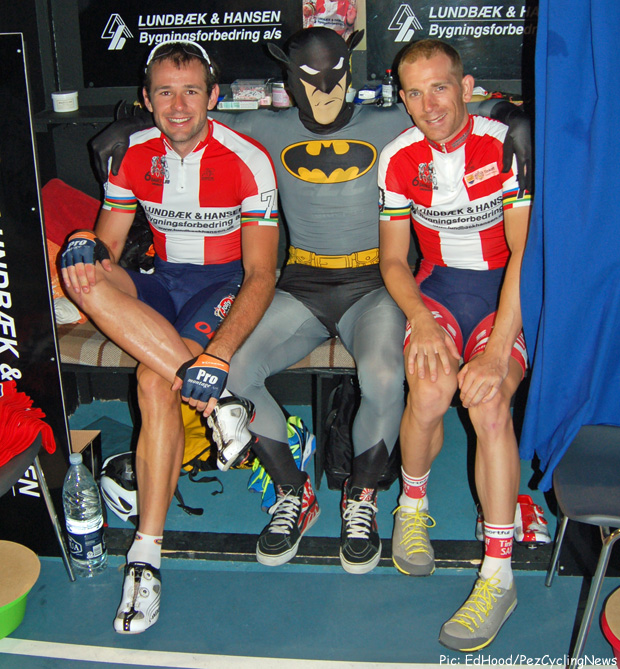 Local riders Morkov and Rasmussen had lodged a complaint with Commissioner Gordon that the Germans Bartko and Kalz were going too fast in the time trials. 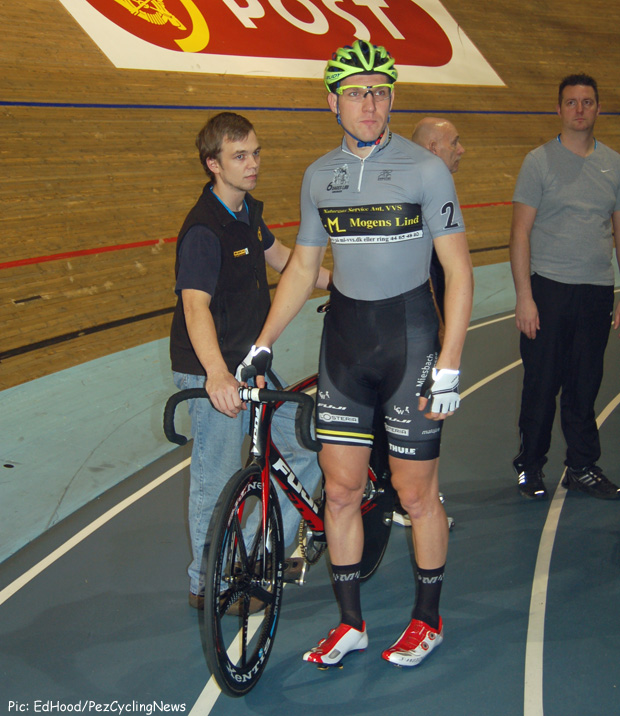 The human with vampyric connections immediately headed for the German cabin, took one look at the size of Kalz – then bolted. It was strange, at no time during the man who sleeps upside down’s visit did we see Daniel Holloway – surely there can be no connection . . .

That was Sunday, day four, pretty much.

But Dirk, our mechanic who’s with Pro Continental team Topsport Vlaanderen in the summer was happy; their boy Kenneth Van Bilsen won the Marseillaise.

Van Bilsen is a second year pro; his first year was compromised by glandular fever but he finished 2013 strongly and the team retained him. They’ll be glad they did.

And the Czechs were ecstatic as Zdenek Stybar disappointed the whole of the Belgian nation down in Hoogerheide at the cyclocross Worlds.

Back to Day 3 though – split sessions; I hate them, Saturday afternoon and evening. It’s really two shifts of work in one day and the afternoon races are always lack lustre things. 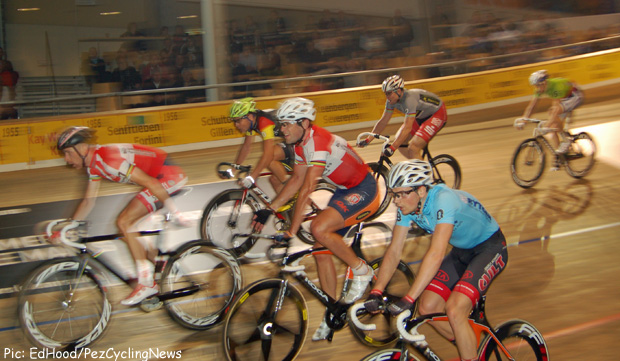 Maybe it was because everyone was unhappy about the afternoon racing – but the Saturday night chase was an ill tempered affair with lots of raised voices and arms waved. But the sounds were good – ‘Move Your Feet’ by Junior Senior; ‘I’m Gonna Get You’ by Bizarre Inc. – so I was happy.

The evening crowd was good; but the other nightmare about Saturdays is that it’s friends, family and sponsors night – the cabins go like a fair and there’s even less room than usual to work. 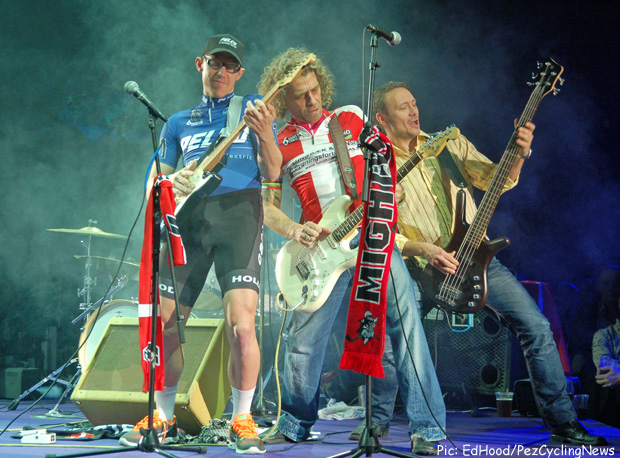 And Daniel could resist could resist no longer, he just had to ‘get down’ with the boys in the band – we’ll say no more about that. It was all part of the fun and there’s no problem with getting to sleep on a Saturday night. 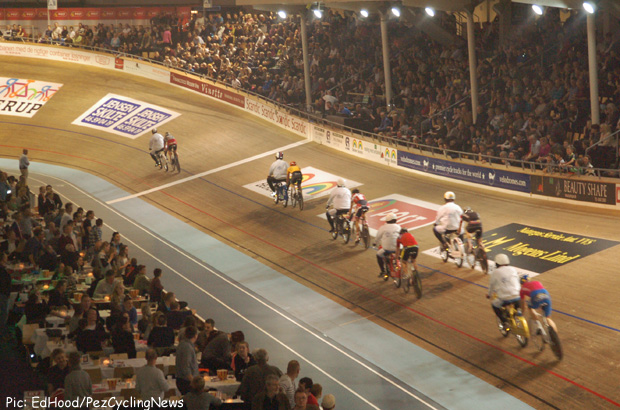 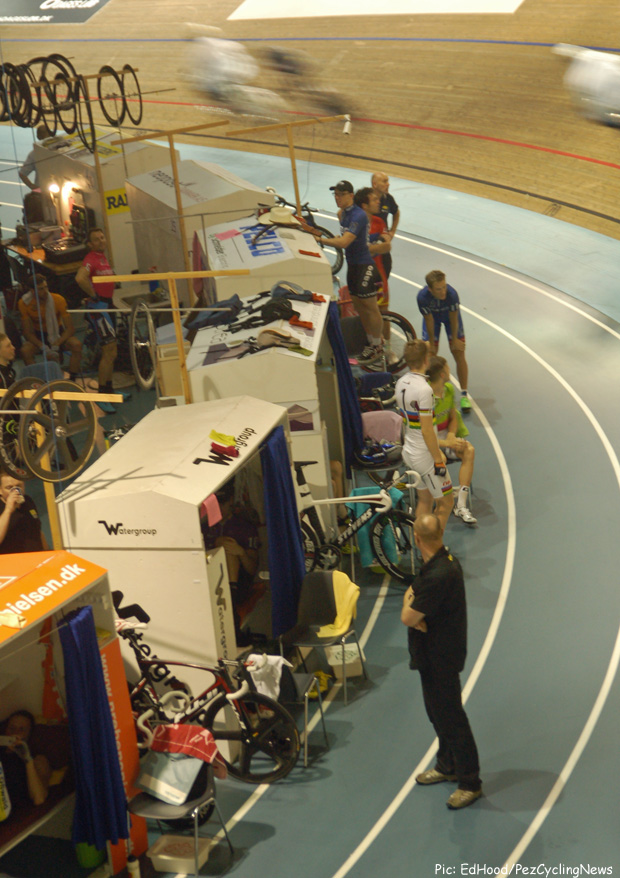 Batman apart, Sunday was quiet so I took a little time to wander the track and let you see what it looks like from further away than two feet; and to check out some of the hardware on show. 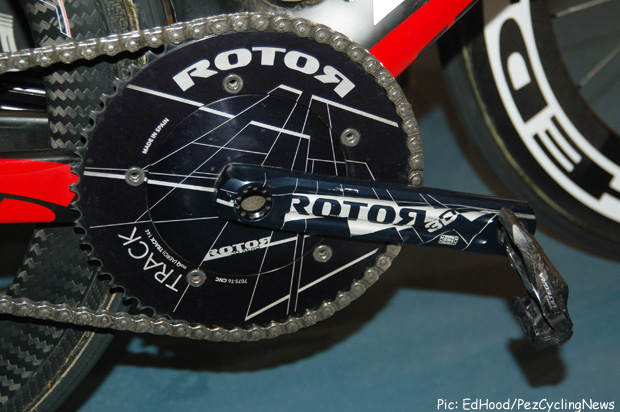 Spanish firm Rotor have been making inroads into the transmission market with their road, and now track cranks. They have a name for rigidity; and just as important – being keen to break into the market – they’re happy to hand out hardware to up and coming riders, free of charge.

You have to get the brand name out there. 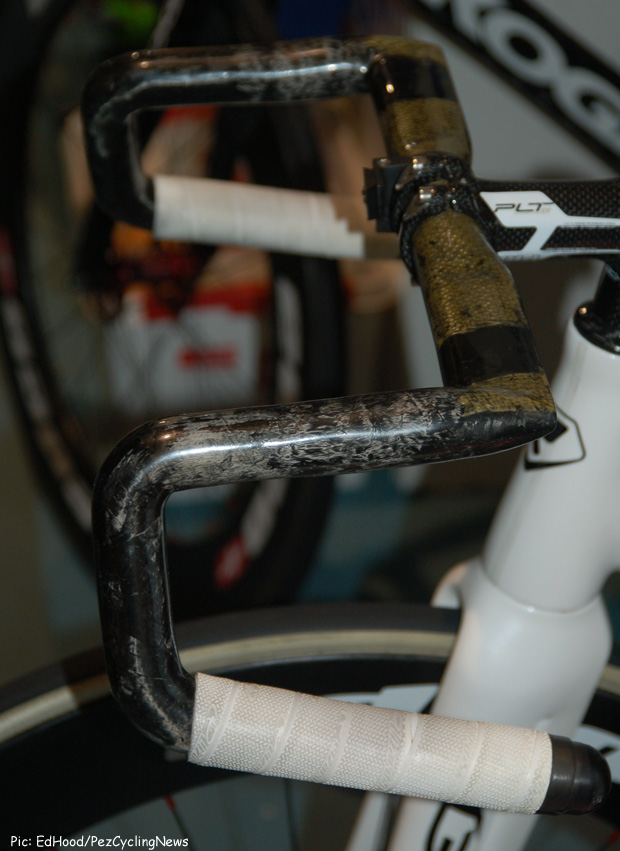 In a reversal of the usual velodrome to street drip down of what’s hip for the ‘fixie guys,’ Dutchman Niki Stopler rides these beauties – or abominations, depending on your view point. They’d look right at home on any courier’s bike but he says he’s had UCI approval for them – form an orderly queue, please. 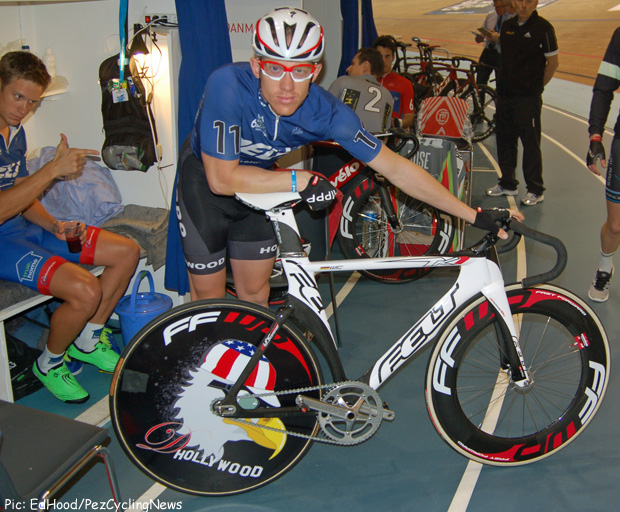 Exploiting the advertising potential of his Fast Forward disc is that man Holloway, advertising . . . himself, it figures.

Kiss and ‘I Was Made For Loving You’ was my tune of the night – it takes me back to Ghent and that heady night when Iljo won his first home six day . . .

Day 5:
Guy was sick so Daniel only had to ride the individual events – as Stanley the Czech soigneur would say; ‘no stress!’ 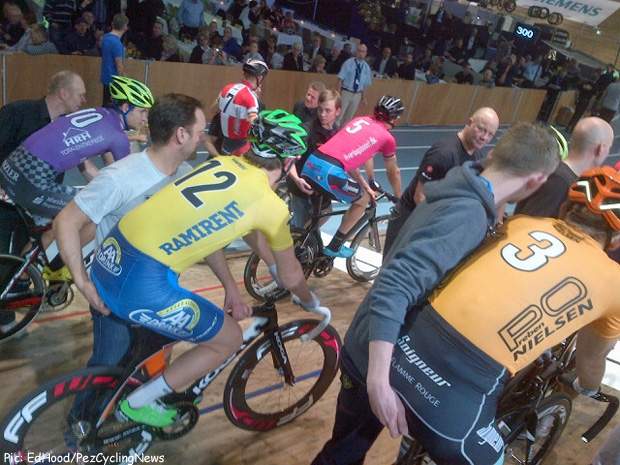 Monday is the night for the 75 kilometre handicap – that’s 300 laps – madison when the big guns have to give away laps to the minnows; and the gains/losses count for the overall – so there’s no messing.

If the handicapper got it 100% right then they should all come together on to the zero lap in the last two minutes. But inevitably, the big teams go berserk early, haul it all together then relent to (usually) let one of the lesser teams win. I’ll keep the scalpel in my medical kit but let’s just say I didn’t think it was a great race. 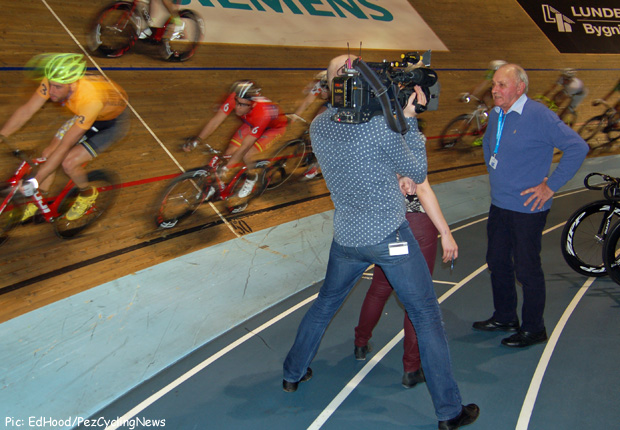 The hi-lite for me was when hour record legend Ole Ritter came to call.

Day 6:
There’s an ‘end of term’ air at a six day on the last afternoon; especially if the promoters pay cash in Euros, not those horrible cheque things. But it fades as evening approaches and the final chase begins to loom large in the mind.

Meanwhile the soigneurs try to take as much stuff out of the cabins to their van or camper as they can and hope the riders don’t notice. The warm up for the big chase is the ‘balustrade’ sprint over 10 laps with the riders tracking the fence ’til the bell.

Dario G’s ‘Sunchyme’ blasts from the PA as Marcel Barth leads the string around, up and down the bankings, hands off, clapping in time to the sounds. The crowd loves it and it does have a unique vibe. Barth has lost the cape and crown of last year, but – he’s picked up matching ‘Tasmanian Police’ shirts for himself and the inevitable Daniel Holloway. 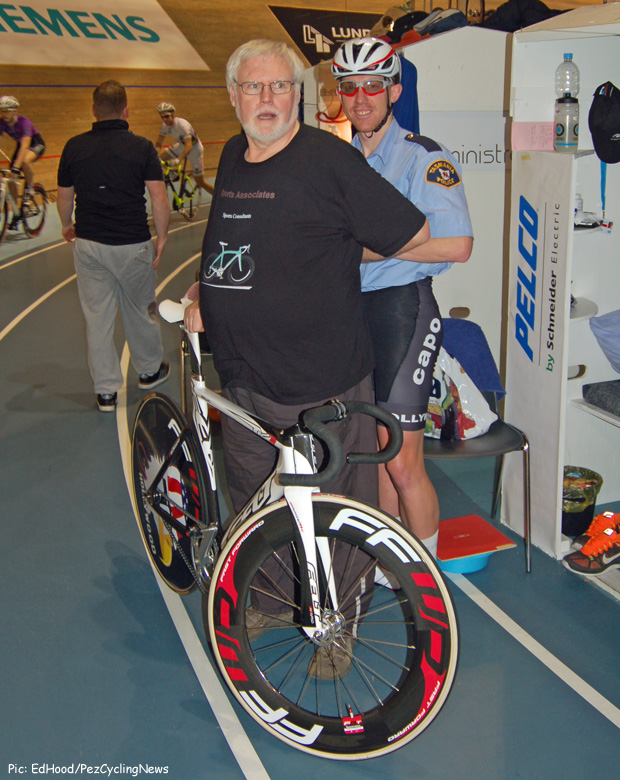 First up, Daniel ‘arrested’ Kris before he took to the track and then adopted joint leadership of the string with Barth. The climax was them both ripping their shirts off to lap topless . . .

I’m not sure if there’s a section in the UCI rules to cover that! If there’s not, it’ll be Pat McQuaid’s fault and we’d best start a commission . . 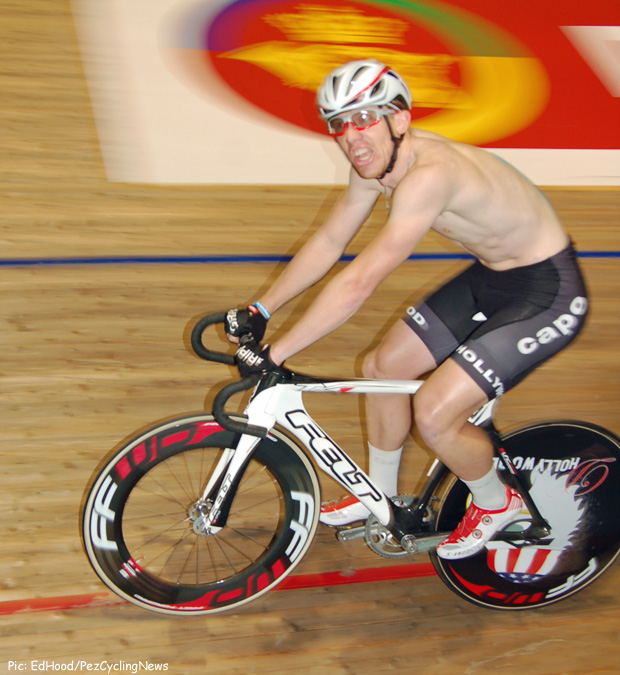 And to finish the act, the field let the two ‘officers’ sprint it out, with Daniel winning. The crowd loved it . . .

There was no joking once the ‘Cara Mia’s’ bongo beat rattled forth to signify the start of the last chase, though. As usual, I missed the first 20 minutes due to Sherpa duties; carrying kit from the track cabin to the main cabin. The next 30 minutes of racing were nothing to write to Danny Clark about, a fairly tame affair.

It looked as if Rasmussen/Morkov were going to take the laurels – again, courtesy of a big points advantage. 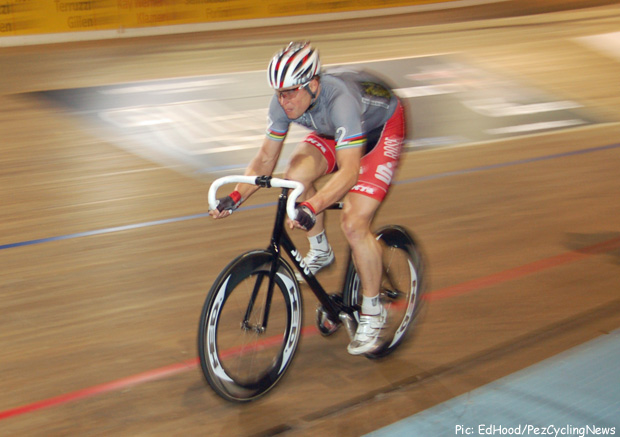 But with the score board long switched from minutes to laps, Bartko/Kalz launched an attack. Par Nr.7 countered but received no help from the Germans in the field and Big Bob and Kalz took the lap. It looked like a set up for the Danes to stage a grandstand come back and grab the winning lap back, late.

But with the Germans in the field riding tempo on the inevitable Danish counter move, it began to look highly unlikely. And sure enough, despite Alex Rasmussen digging deep he couldn’t quite make the junction before the gun. The speaker thought Rasmussen had made it and initially the Danes were declared winners – to the joy of their fans and vocal disapproval of the sizeable Bartko contingent.

But the big score board flashed into life, again – 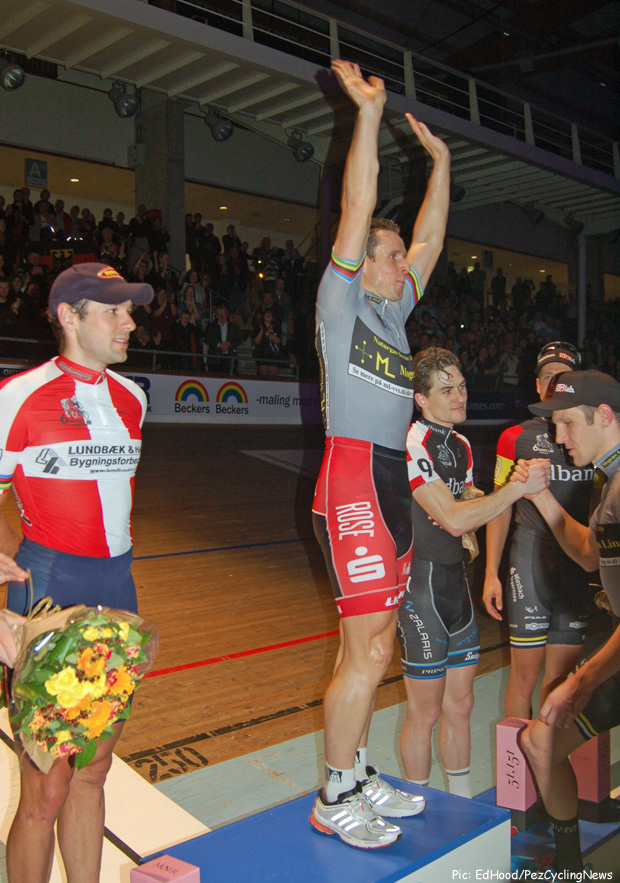