This is proof that Italians can organize something well…very well. Take 300 or so cyclists with bikes, and fly them out to Sharm el Shiekh, (ie: posh resort in Egyptian boonies), organize a 120 km bike race through the desert, and get the race going with Egyptian escorts and driving. It isn’t an easy task.

Probably we would have more success in nailing ice-cream to a wall…but then again we aren’t Pinarello or Classe 1 are we!? 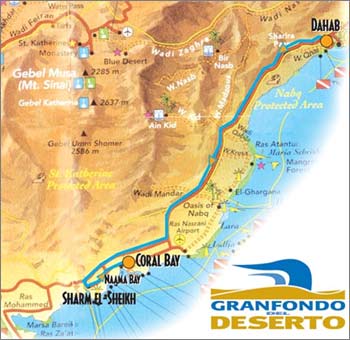 Pinerello and Classe 1 last year organized an event that was worth a Knighthood. A week of sun, culture, swimming, scuba diving, entertainment, great food and I nearly forgot, a 120km bike race open to everybody, through scenery that is well worth a good look. All this set up in Coral Bay, the huge holiday resort built and owned by Mr. Preatoni’s Domina Vacanza, Mario Cipollini’s team sponsor. 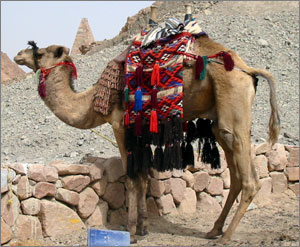 There are plenty of these around, but we recommend you bring your own ride…

Pinarello take real heart in organizing Bike races for us amateurs. They organize many in Italy that are PEZ-worthy but the “Granfondo del Deserto” is something unique. Pinarello have teamed up with Classe 1,a Domina Vacanza company, that will take care of all your travel requirements. 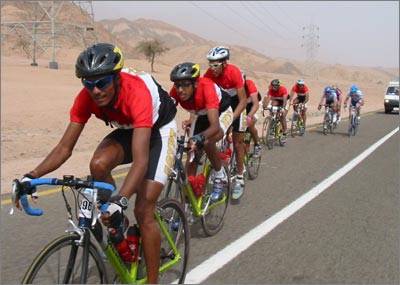 Hell bent for sand… The local boys threw down the gauntlet in ’03.

It’s a week of fun and games from the 15th to 22nd of February. The entries close on the end of January. I hung out there last year and I was deadly impressed. The race itself is so fast and furious that the Eygptian National team got a 1,2,3! No Italians could keep up with these local boys.

So I was thinking… what about all you English speaking hard core bikers?? Up to the challenge? Click on the web-site (www.granfondodeldeserto.it ) and look at how the week is organized and the great price for an all inclusive week. I’ll hopefully be there to slam some beers with you and to swap some stories and secrets and maybe I’ll even show you my Tyler Hamilton jersey that he kindly gave me!!

Drop me a line if you need any help.

And check out the Pinarello website Pinarello.it for more info.