Interbike is in full swing in Vegas at the moment and the PEZ himself is there front and center but before he puts down those gambling chips and Vegas style Negronis there’s time for another look at some of the beautiful machines that were on offer back in Germany at Eurobike.

With so many nice bikes on display plus the best of accessories and bits it was sometimes difficult not to want to buy anything but I resisted well for the first two days just until the guys at the accessory company, BBB stepped up. 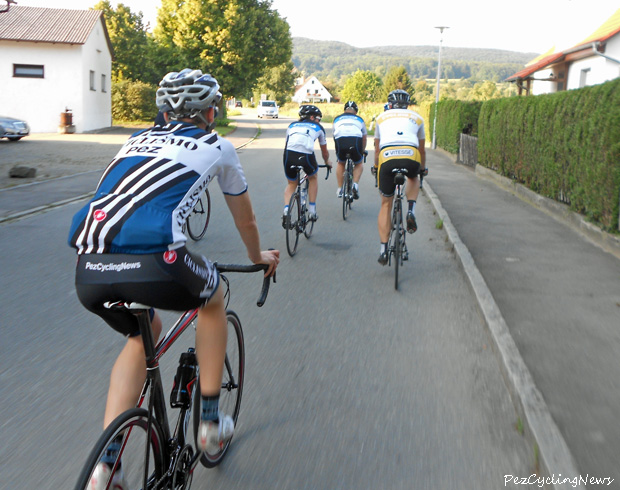 They offered to take me for a ride after the show one day to test out a pair of their sunglasses, bottle cage and bottle. All very nice equipment at competitive prices but unfortunately I was taken by the much more expensive thing they loaned me – a Felt bike. 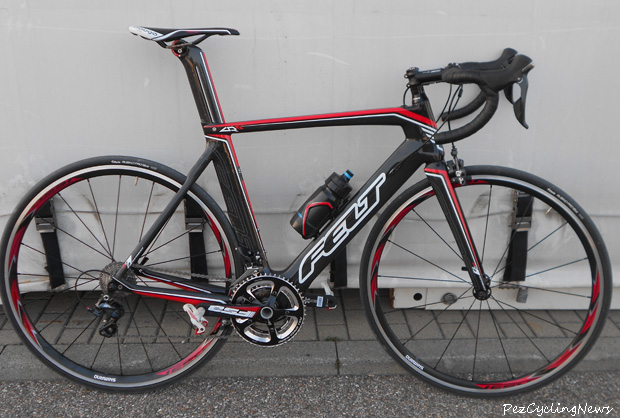 It was their AR4 model with the new Ultegra groupset and it rode beautifully, responsive, stiff and with a retail price in Germany of only 2500 Euros I was already starting to think how I could get one of these babies back home to France with me……

Oh and nice bottle cage and bottle too thanks BBB! 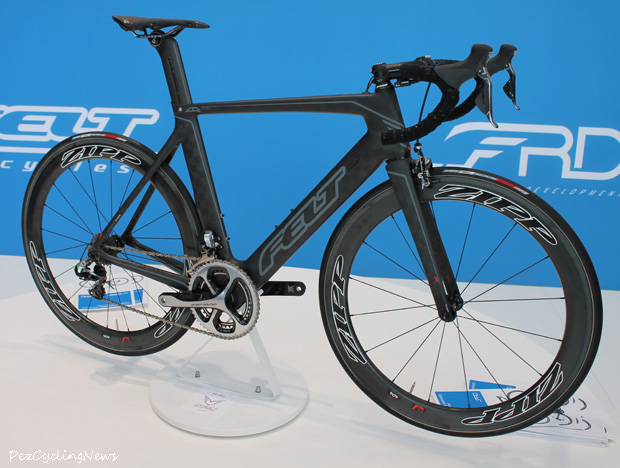 This beauty was their AR FRD model and much more expensive than the AR4 I’d ridden the day before but with the same styled aero frame. This one was on a rotating turntable showing off its aerodynamic frame fom every angle and was simply gorgeous, in a futuristic aero kind of way. 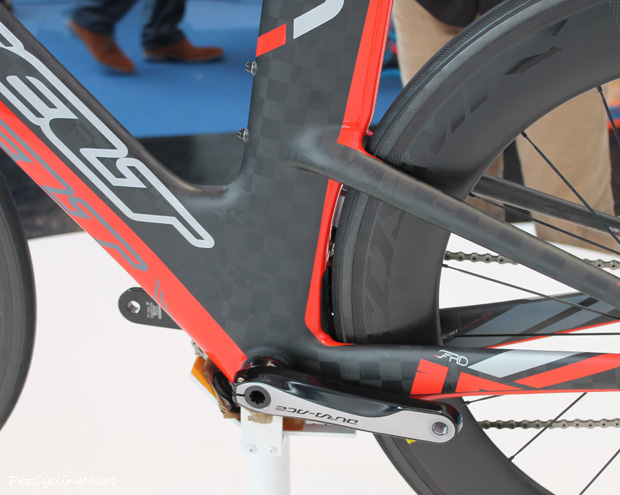 As was its cousin sitting next to it, the IA FRD Time Trial/triathlon bike which had a very tight rear end with minimum clearance. 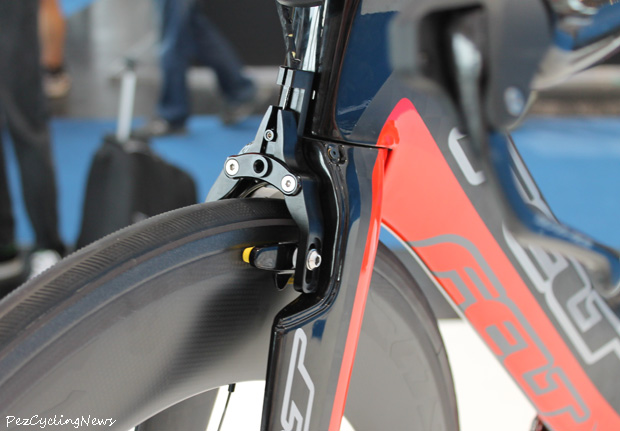 And some nice detail around the integrated front brake. 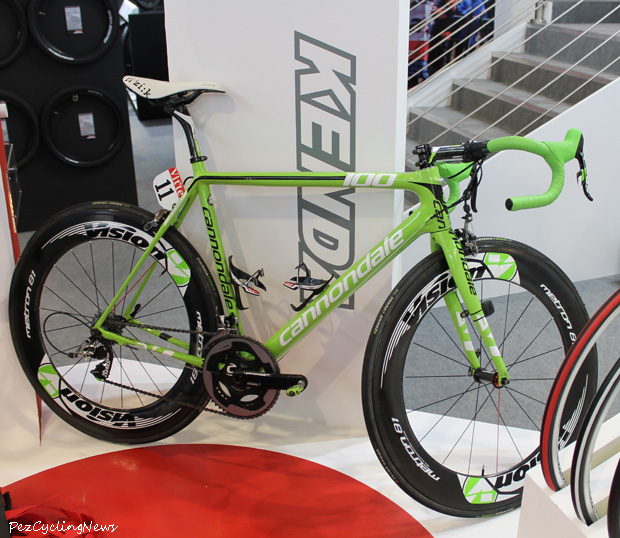 From the high gloss stands and rotating turntables of Felt to the nonchalance of the Kenda tire stand now where one of Peter Sagan’s bikes was simply leaning up against the stand like some sort of afterthought that they didn’t know what to do with. 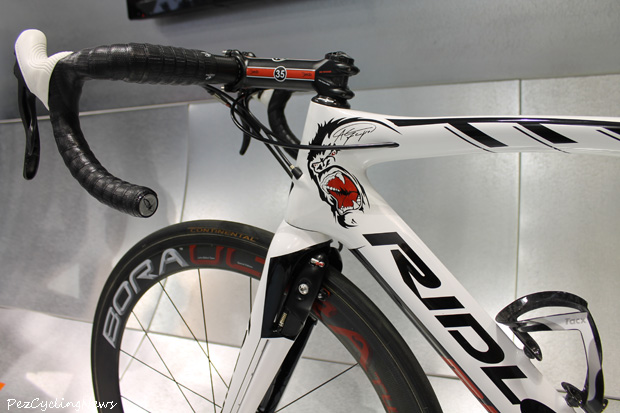 Meanwhile André Greipel’s Ridley Noah Fast had a mockup windtunnel built around it showing off its aero qualities of integrated brakes and foil style frame. Greipel’s bike also featured his custom Gorilla paintwork and some super thick wrapped LizardSkins bartape for an extra comfy and large grip for his Gorilla hands. 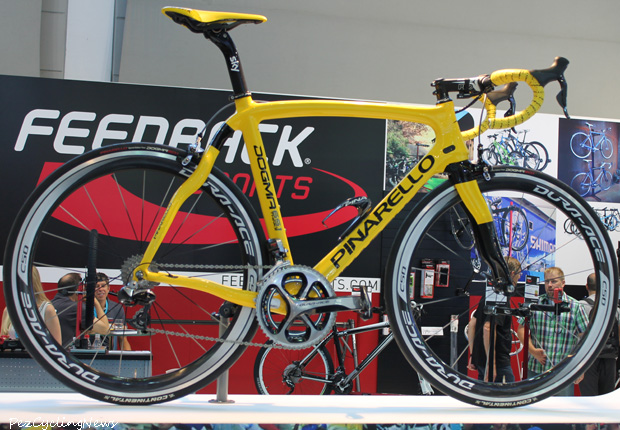 Over at Shimano they had a number of Pro bikes on display with Chris Froome’s Yellow Pinarello from the final stage of the Tour de France taking pride of place. 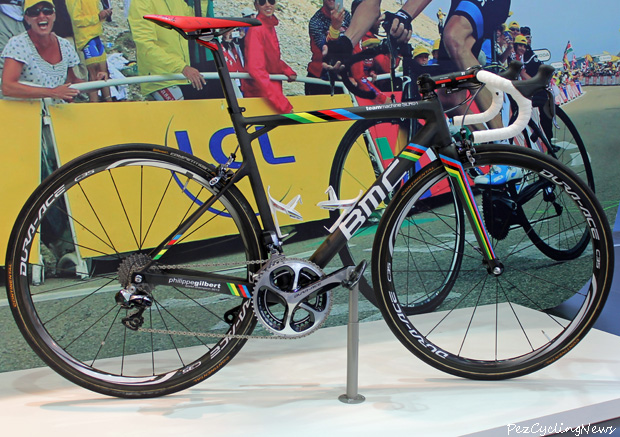 And Philippe Gilbert’s BMC also created a lot of interest. 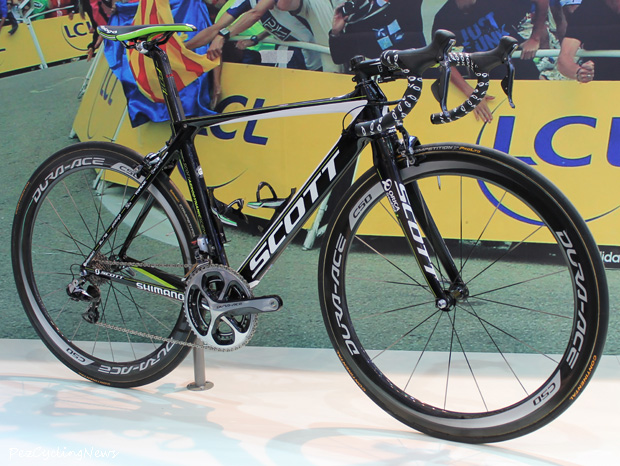 Of course these days us consumers can actually buy these exact same machines from our dealers so the pro bikes don’t quite have the same ‘awe factor’ as they did 15 years ago – still, seeing a bike like Simon Gerrans’ Scott which actually won a stage of the Tour de France is always cool. 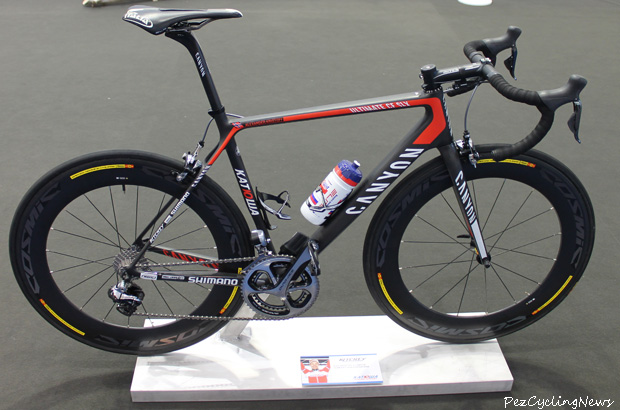 It was actually the accessory companies and not the bike manufacturers themselves who had the most probikes on display this year with Ritchey having Alexander Kristoff’s Katusha Canyon bike on their stand showing off their handlebars and one of their super stiff and long stems. 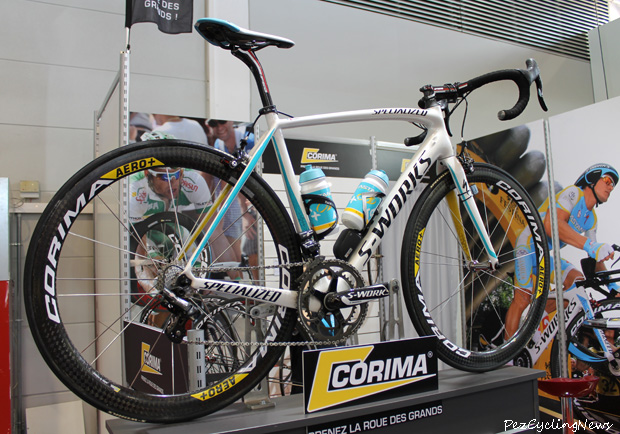 Meanwhile at Corima they didn’t have any new products on display this year but their wheels were still beautiful to look at, as was Vincenzo Nibali’s Specialized which was on their stand. 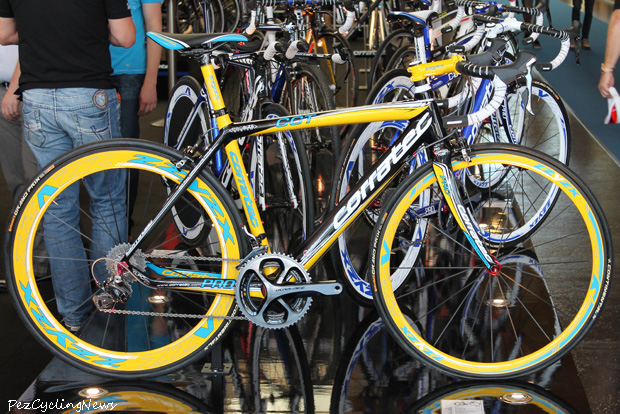 No pro bikes were on display with the guys from Corratec, instead they went for some extremely bright and flashy colors to stand out. 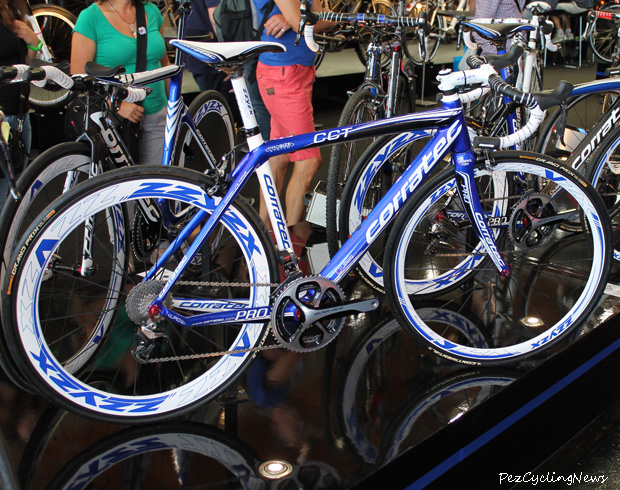 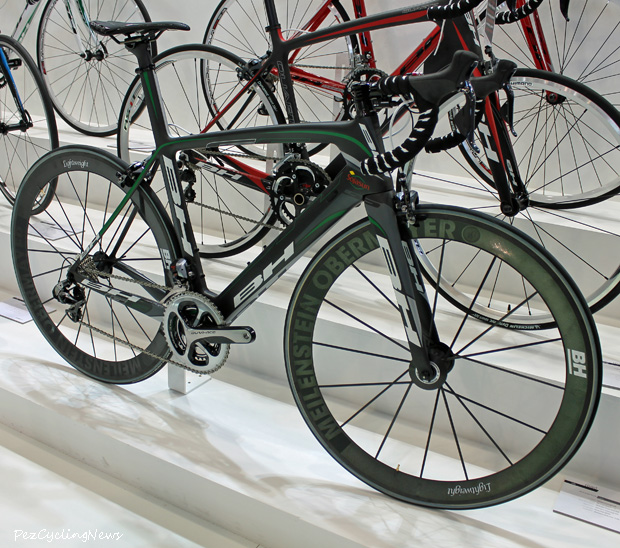 Much more subtle was this BH with Lightweight’s new Mellenstein wheels. They didn’t mention the weight of this machine but I’d say it would be well under UCI limits. The Sojasun team used the same bike with different wheels in the Tour this year and I know that their mechanic had more lead weights in his toolbox than the average fisherman to make sure that they would pass the limit. 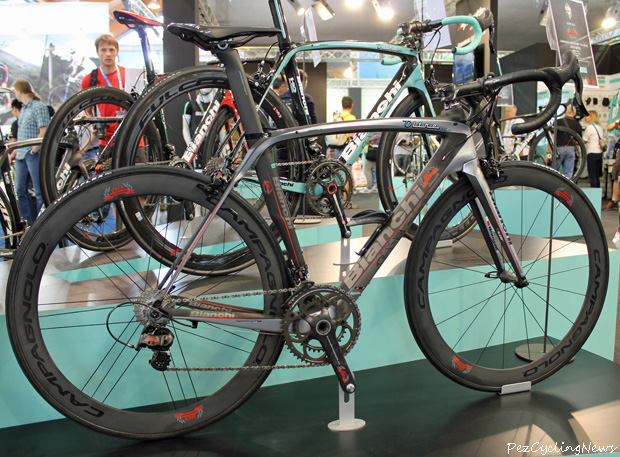 I actually gave some column time to Bianchis in my first Eurobike ‘bike’ special but I couldn’t go past this Oltre decked out with Campagnolo’s 80th anniversary drivetrain – a sure classic. 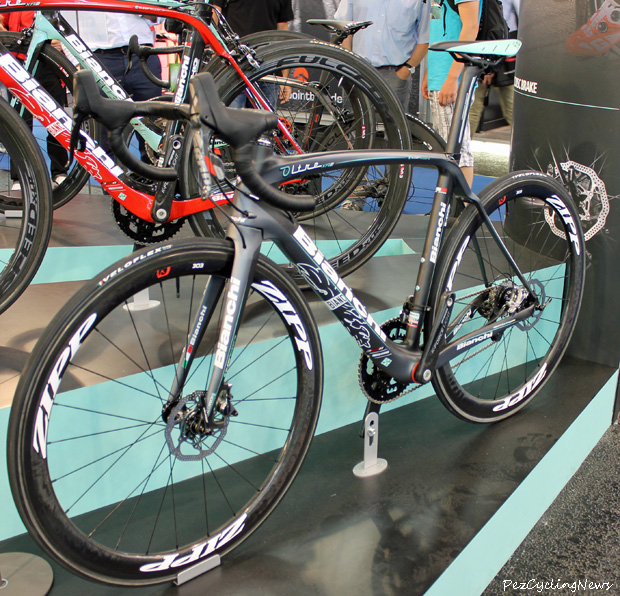 Or for something a bit different this one had Zipp wheels and a Sram 22spd disc setup. 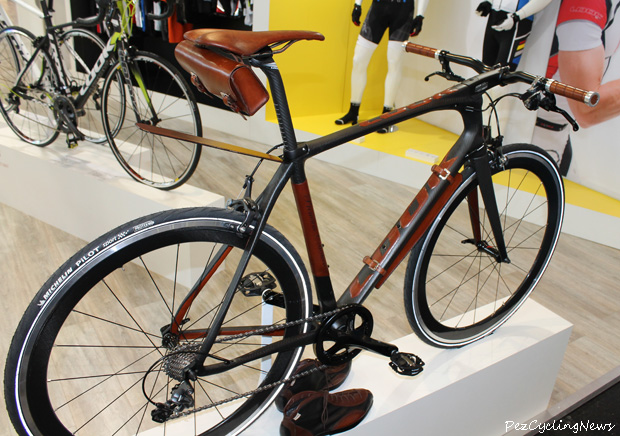 Speaking of different how about this ‘Show Special’ LOOK had displayed. A city bike for the ultra hipster with leather touches everywhere. 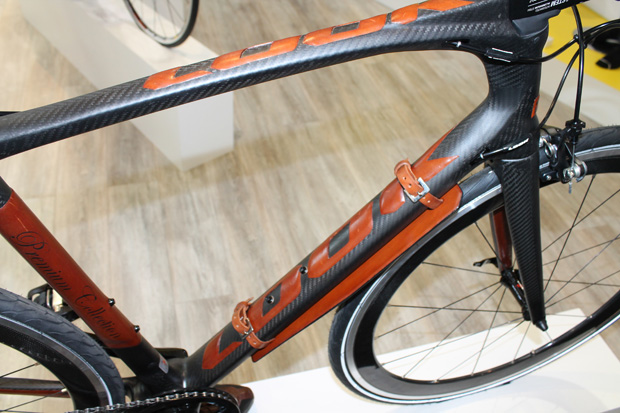 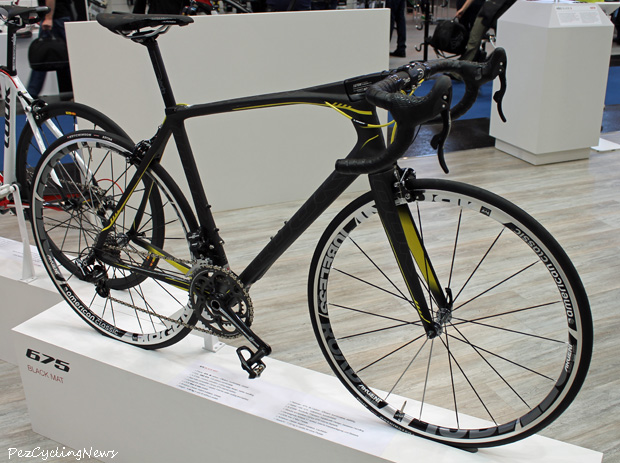 I’m not hip enough for that bike though but their 675 with American Classic Argent Tubeless wheels and LOOK’s extremely funky stem design was much more up my alley. 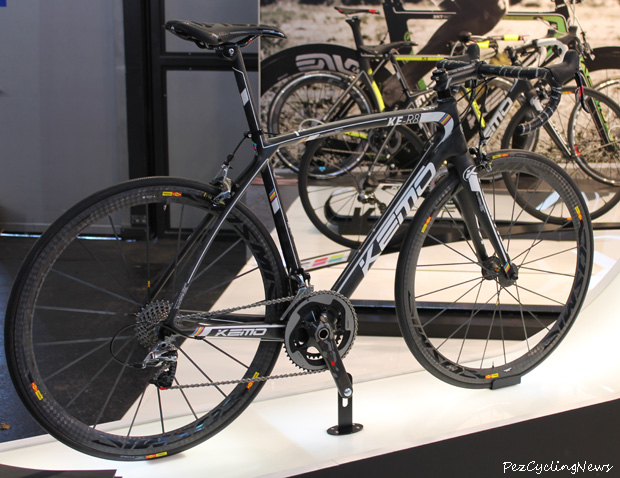 As was boutique Swiss brand Kemo’s KE-R8 model. I knew nothing about Kemo before the show but this high end carbon manufacturer had some very classy machines on display at Eurobike and impressed me with their design and finish. 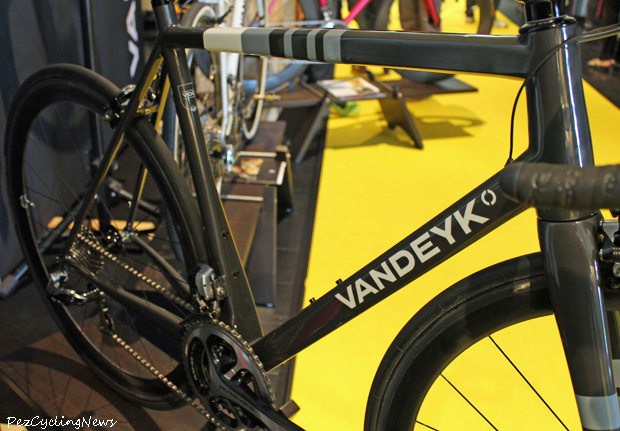 And when we’re talking about finish there weren’t many better finished bikes on display than the Vandeyks. These German bicycles are immaculately handcrafted and refined in the smallest detail and are unique in every way. They only had a couple of models on display but the attention to detail on each was superb. 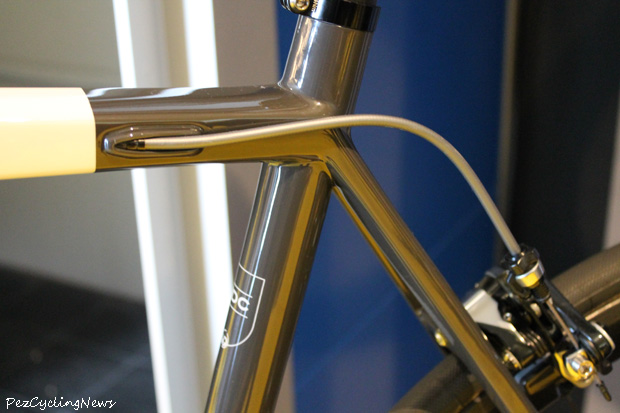 Handcrafted and expensive yet oh so beautiful. 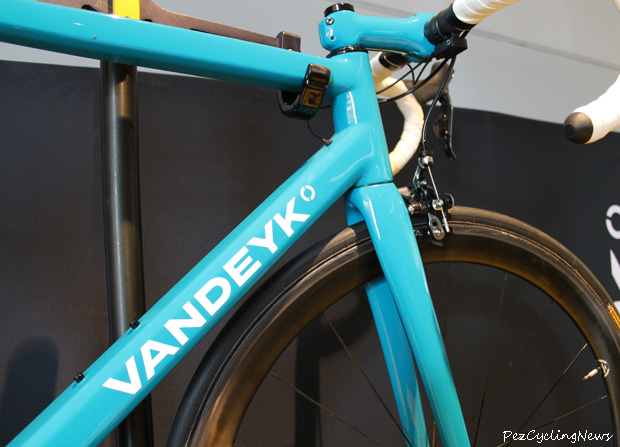 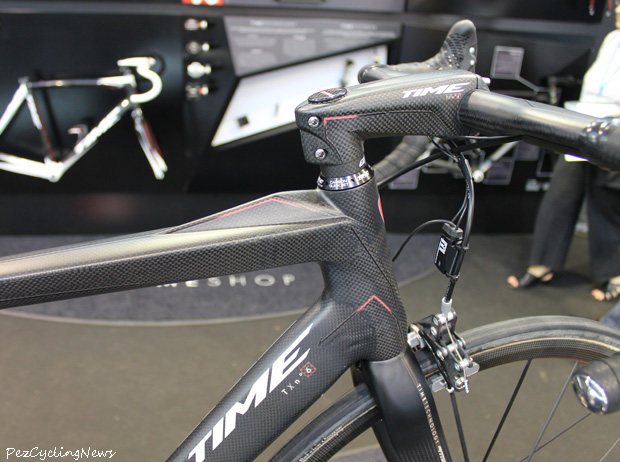 And finally with me living in France and having a French wife and a French life I couldn’t let the show go by without covering the Frenchies over at TIME. This carbon beauty was certainly something special it’s just a shame that I’d probably have to sell my wife and life to afford it. 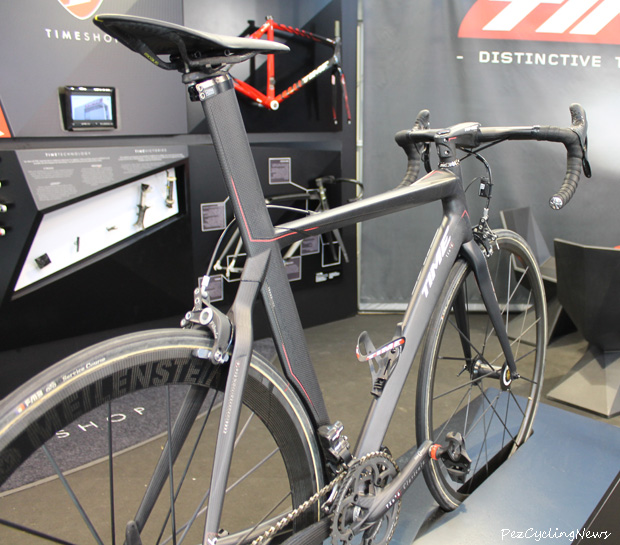 Still with Lightweight wheels, Clavicula cranks, Campag Record and Fibula brakes it would certainly be a nice ride . . .

Keep it tuned to PEZ for more from Eurobike and then even more new stuff coming soon from Interbike. Gotta love the show season!