Eurobike: The Beautiful And The Bizarre

We’ve already seen the most beautiful bikes and some of the best accessories and new bits from Eurobike but what about the weird stuff? The innovative, futuristic or just plain bizarre is also a big part of this show as our German resident and Classic Bike enthusiast Leslie Reissner recently found out.

There have been a great many technological advances in the world of cycling over the years but there is a kind of punctuated equilibrium where big jumps are made and then the industry settles down to adjust to and digest those changes. Eurobike, as the world’s largest bicycle trade show, showcases the new and exciting but at its heart reveals many incremental changes. The invention of electronic shifting is not news in 2013 but improved and less costly systems are; disc brakes have existed for years on mountain bikes and now they are appearing on road bikes too; carbon fibre, once a hyped-up exotic material, appears almost everywhere but is lighter, stronger, cheaper. 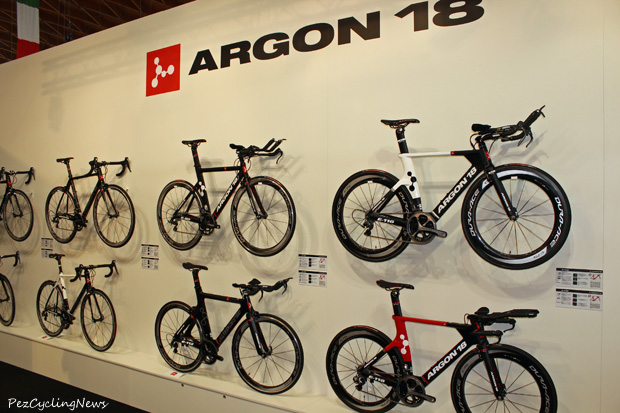 A good example at Eurobike was the impressive stand of the Canadian company Argon 18. The firm was established in Québec in 1989 and specializes in road, time trial and track bikes and offers interesting small-step innovations, like a clever threaded locking headset stack to maintain front-end stiffness with needing spacers. In 2008 its E-118 time trial bike won an innovation award at Eurobike and this year the company has a new time trial frame, the E-112, that draws on the same technology but is lighter, stiffer and, yes, less expensive. Changes in the road line-up also see the top-level Gallium model being superceded by the completely redesigned Gallium Pro, with massive asymmetrical chainstays and a new BB86 bottom bracket shell. The one-time top road model, the Krypton, has now become the entry-level Argon 18 bike as it is supplanted by the Gallium models. Designed and engineered in Canada, the Argon 18 bikes offer something different from the big brands whose products are seen everywhere. 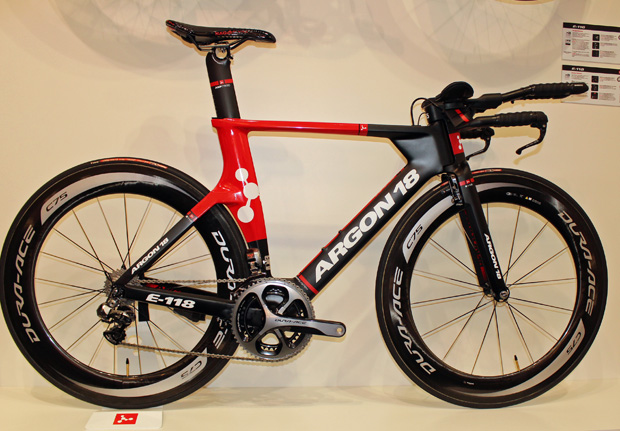 And the biggest big brand (probably after Giant, which was also present) was Specialized, which had a colossal stand with space for such fripperies as a wind tunnel mock-up and a western saloon. The stand was packed as showgoers came to look at the extensive range of mountain bikes, road bikes, time trial bikes, bikes personally ridden by the pros, shopping bikes and bikes designed to reverse global warming. 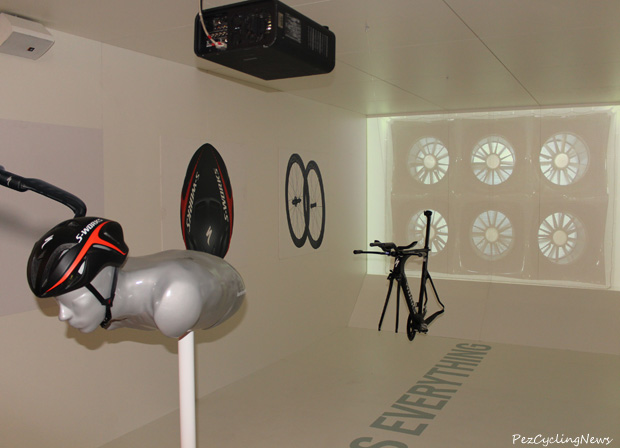 There are times when one has the impression that this year’s big breakthrough might be switching colours from red with black stripes on white background to just going with black with red stripes. But Specialized, which has been heavily promoting its latest iteration of the Roubaix comfort road bike with disc brakes, did have a very interesting technology on hand that most people ignored. 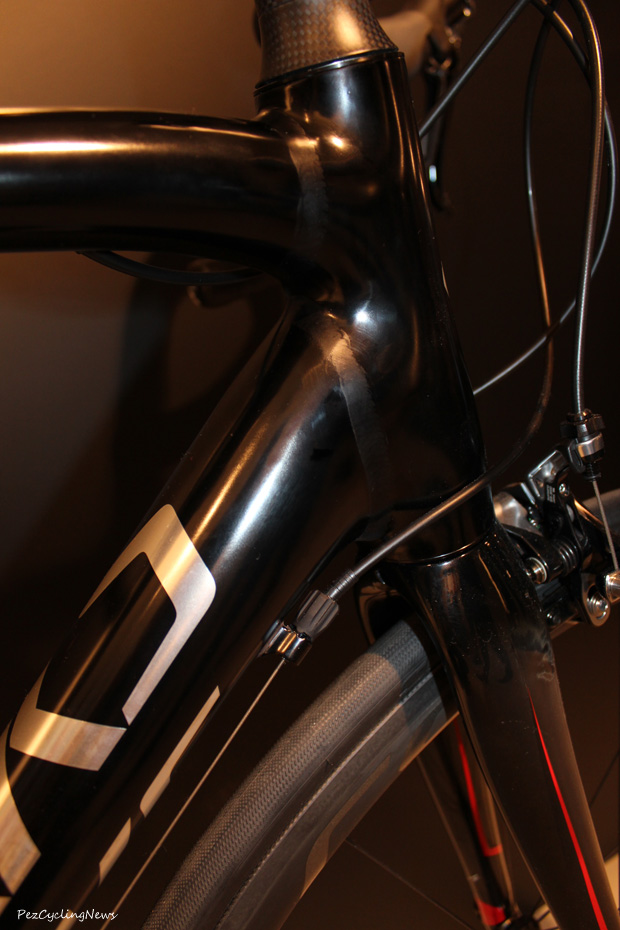 This was its Smartweld aluminum welding system where hydroformed tubes are brought together with dome-like joints filled with welding material. The claim for the patented system is increased stiffness but also a more consistent joint with greater durability. Aluminum clearly still has a future in high-performance frames; the other advantage of Smartweld is that it appears to do away with the thick, MTB-like weld beads found on most aluminum road frames. 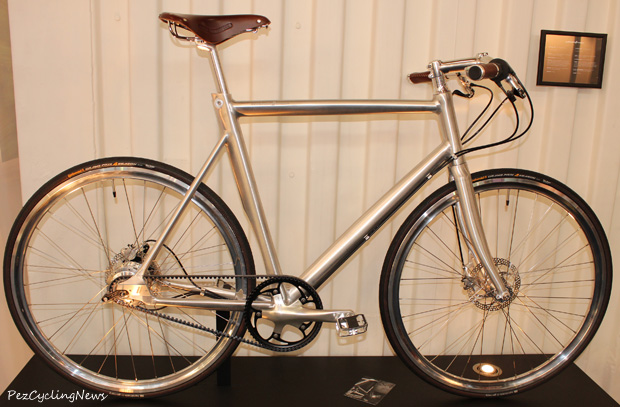 And sometimes you don’t need to do much new except offer such a range of styles and colours in your line that anyone walking by would think they had spent too much time listening to “Sgt. Pepper’s Lonely Hearts Club Band.” Electra bicycles probably fly beneath the radar for most Pez readers but clearly have a big market presence in the leisure and kids market. 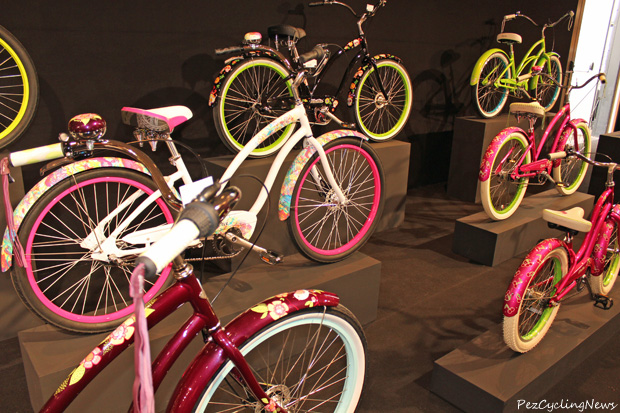 Sometimes an obvious idea is taken up by someone in this industry that often is very conservative. What could be more brilliant than integrating the water bottle cages you are going to put on your bike anyway? Chapeau to Gios for using this idea on a couple of their new machines. 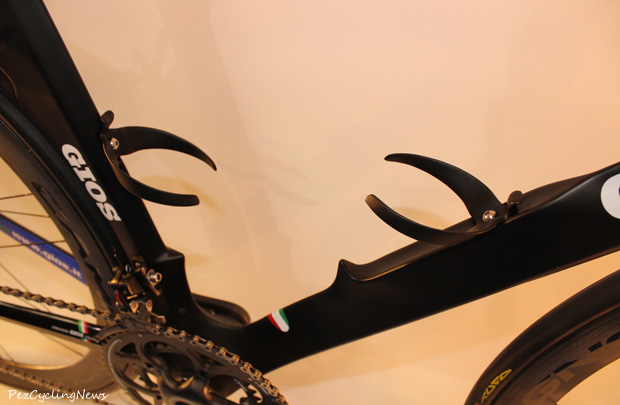 And if you wanted a nice paint job and older technology you have plenty of choices at Eurobike too. A regular exhibitor, in a very small way, is the Czech Josef Mecizek who displays at least one of his magnificent high-wheelers each year. 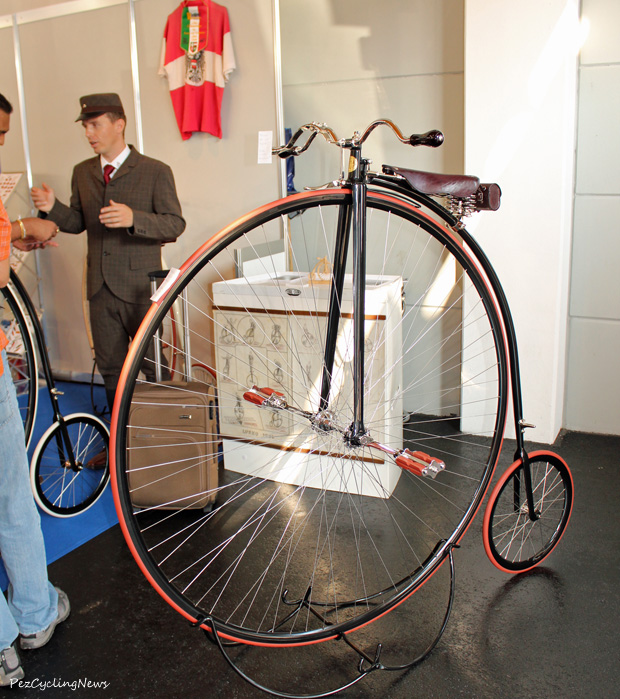 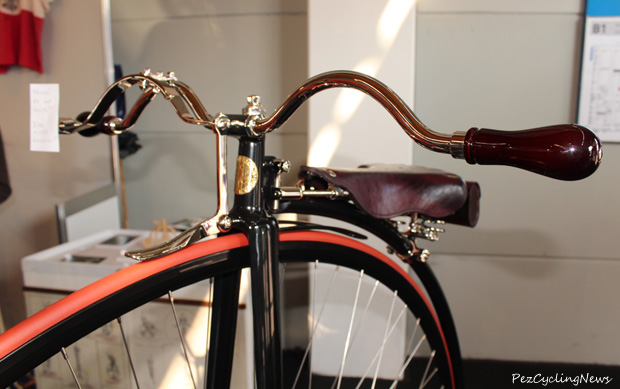 Moving out of the late-19th Century but not by all that much were the beautiful bicycles of the Japanese Miyata firm, which had a very large stand devoted to its lovely steel bicycles. 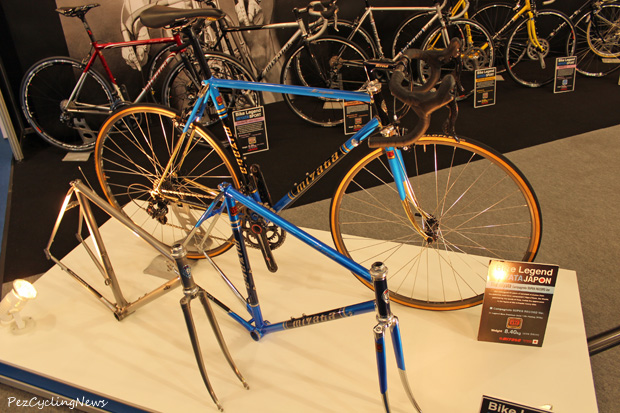 The company does not seem to be convinced that integrated shifters are not simply a passing fad and had plenty of bicycles with downtube levers, including some nice touring bikes. The company’s publicity made much of the fact that a Miyata-built bicycle was ridden to victory in the 17th stage of the 1981 Tour de France. 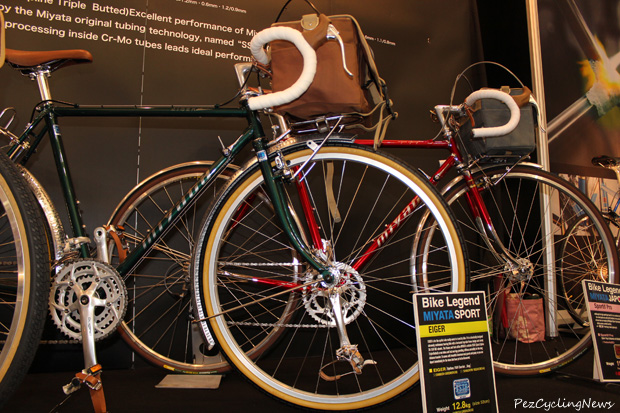 Miyata did not offer anything in carbon but another firm with a long tradition in the industry did. Irio Tommasini began building bicycles in Grosseto, Italy in 1957 and his company not only continues to build very fine steel frames by hand but also offers frames in titanium, aluminum and carbon. All are produced in-house, which is not generally the case for bigger, better-known builders. The company remains particularly proud of the steel frames and had a large display with the bold motto “Steel Alive!” There continues to be a good demand for finely-crafted steel and Tommasini’s brass-brazed frames still enjoy the favour of connoisseurs, particularly in North America. 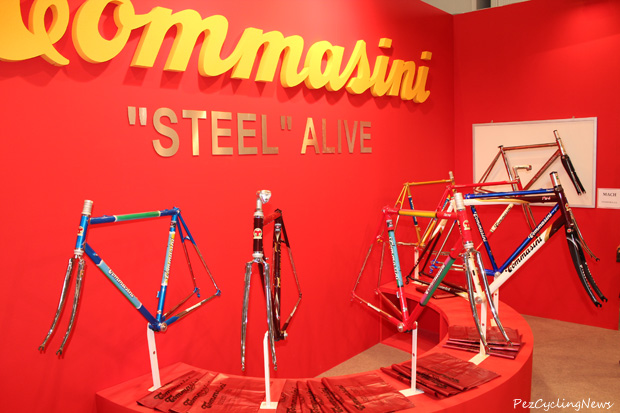 But what if you want a break from tradition? As in…something really weird? No problem at Eurobike! You could start with a bike that would make cycling in Ottawa’s deepest winter easy… 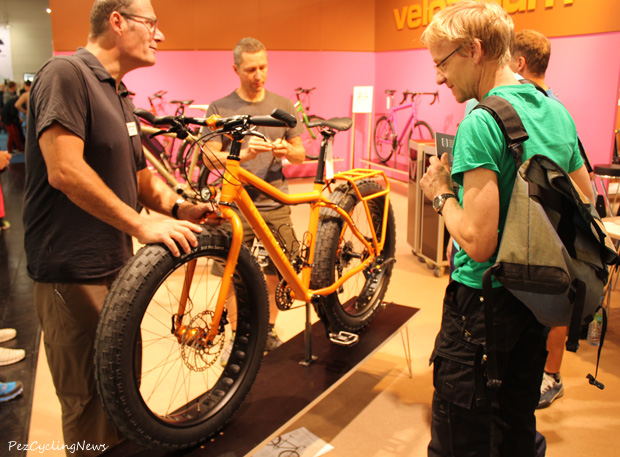 …or impress your Japanophile friends with your own example of extremely far-out design when you roll up for the group ride with your Yasujiro fixie! Or the road bike with the marble finish… 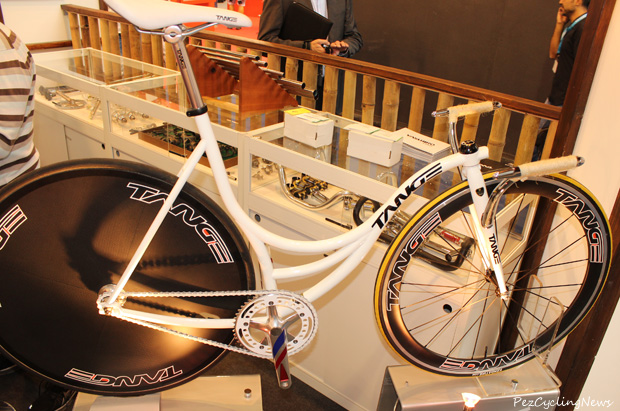 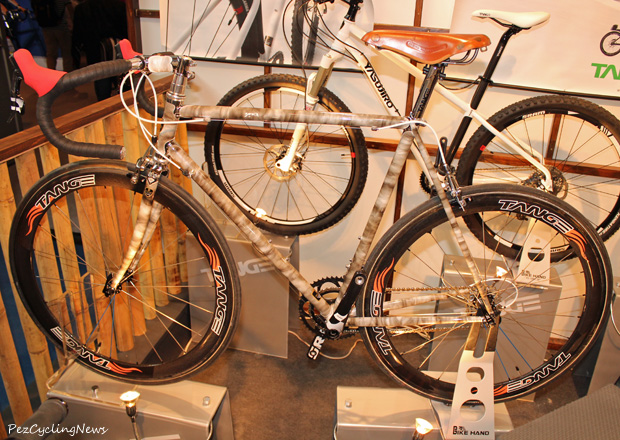 But why settle for the marble look when you can have real wood? Bamboo bikes are not so unusual anymore but at Eurobike there were a pair of intriguing bicycles made with engineered wood. The more attractive of the two is the NEMUS bicycle from Dresden, Germany due to go into production in December. Its new “Cajalun” model uses engineered wooden tubes in a spiral-pattern design fitted into aluminum for a clean, modern look for a city bike. NEMUS stands for “New Ecological Mobility in Urban Space” and is the brainchild of its youthful CEO, Curt Beck. The project, with a focus on using renewable resources, has taken five years of development work. 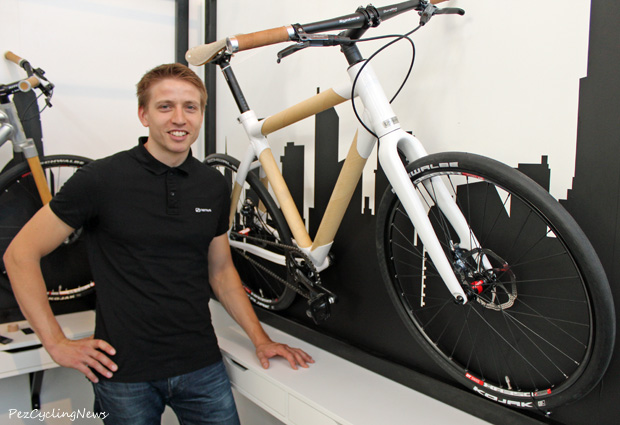 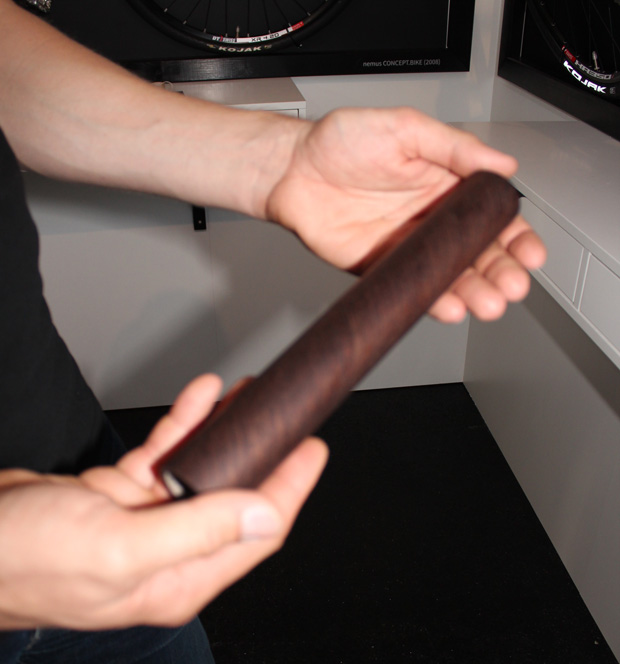 Another brilliant wooden bicycle comes from Sandwich Bikes and is made up of flat plywood and shipped, well, flat-packed. It apparently takes 30 minutes to build (or, as my friends would point out, the length of time I need to change a flat tire) and looks hilarious. In a good way. 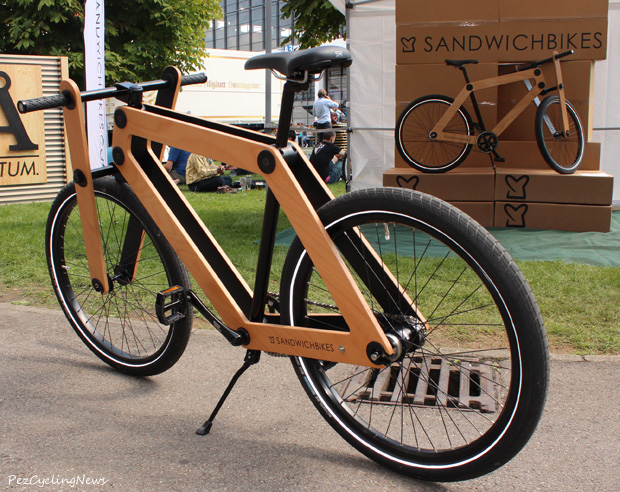 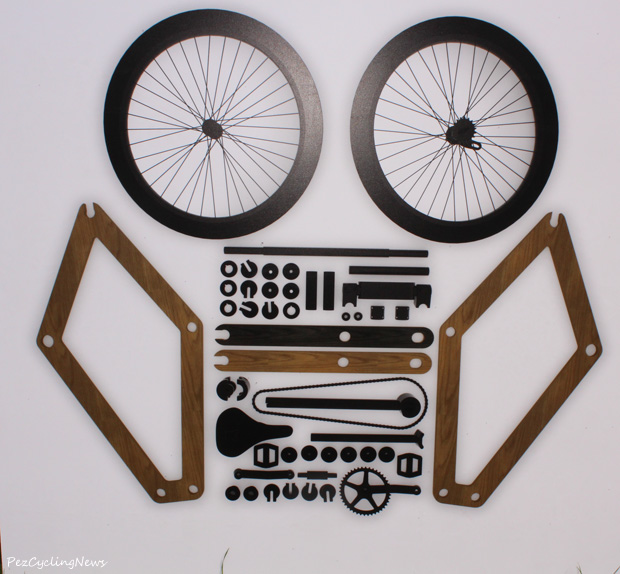 Eat your heart out IKEA.

There were bicycles to fit every need even a well-designed road bike for a child. 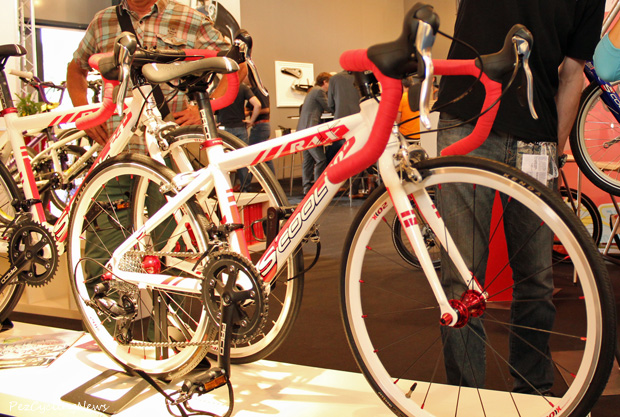 And of course there were lots of recumbents in various configurations, whether tricycle, reverse trike, two-wheeled and so forth. A British firm, ICE, featured a range of beautifully-constructed reverse trike recumbents and demonstrated how easily it was to fold one for transport. 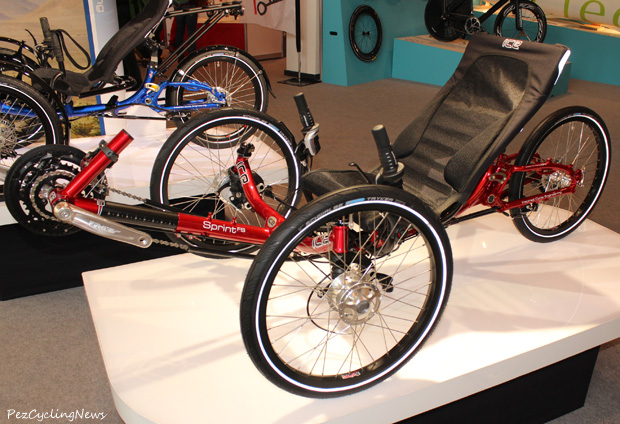 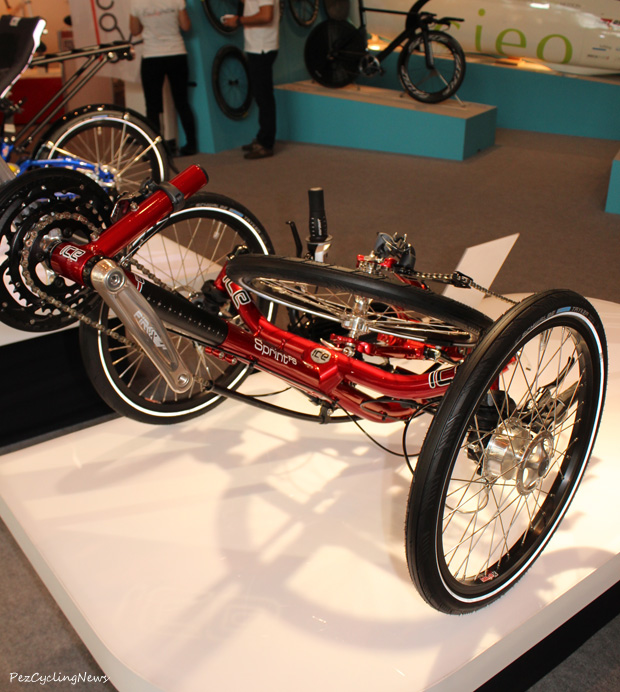 ICE also produces a non-folding high-speed racing model, which must be among the coolest-looking recumbents ever, if only for the fantastic carbon seat. 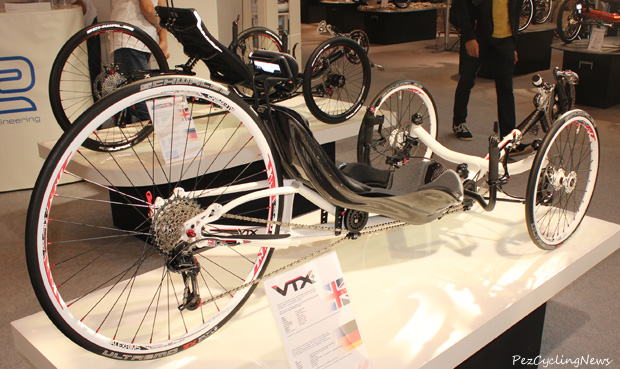 Racing would not be a factor for anyone buying a far stranger device, the ElliptiGo. This looks like a combination of a kick-scooter and elliptical training machine from your gym and is designed to provide a low-impact, high-performance running experience. Running—not cycling. Fascinating. 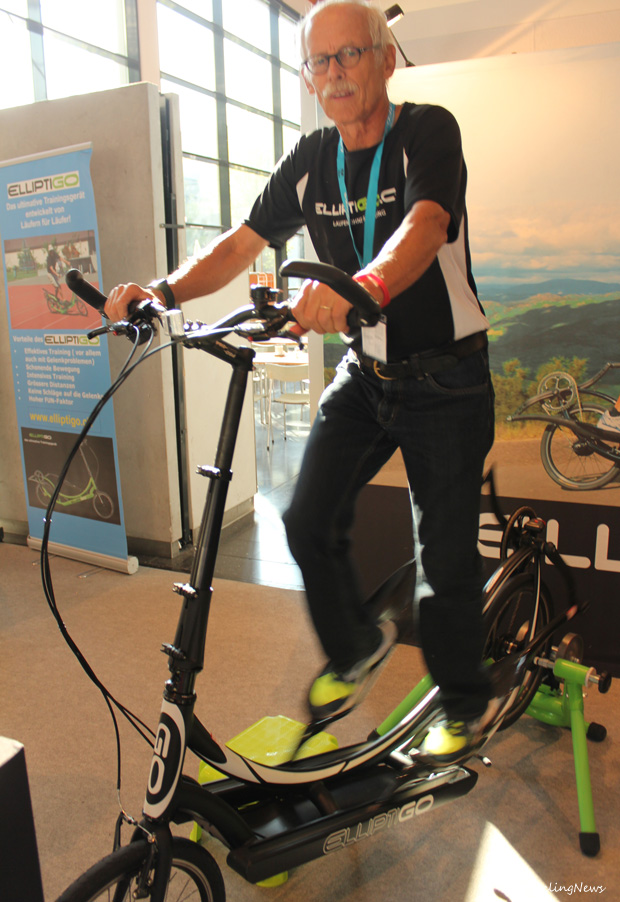 There were other examples of novel technology. Some of them were pretty simple but very clever such as the built-in full-length LED lights for mudguards that won a Eurobike innovation prize. 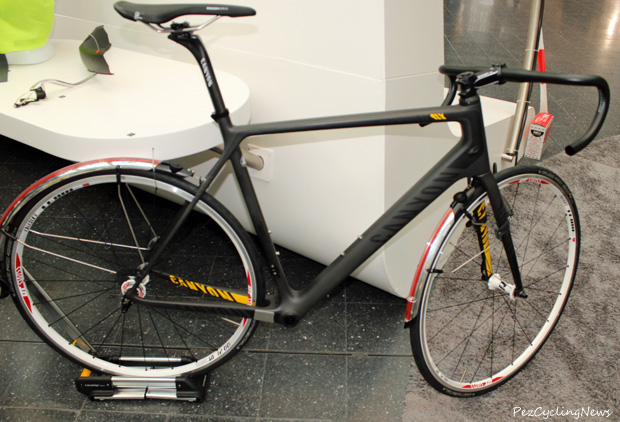 And then there was technology that was so forward-thinking it took your breath away. This was the case of the Stringbike, a product engineered in Hungary. I cannot imagine how someone came to be thinking: “If only we could replace that heavy, dirty, inefficient bicycle chain with something better.
Like string.” And that is what happened, although “string” is a bit of a misleading description of what is very fine polypropylene rope, such as you would see used on a small sailboat. 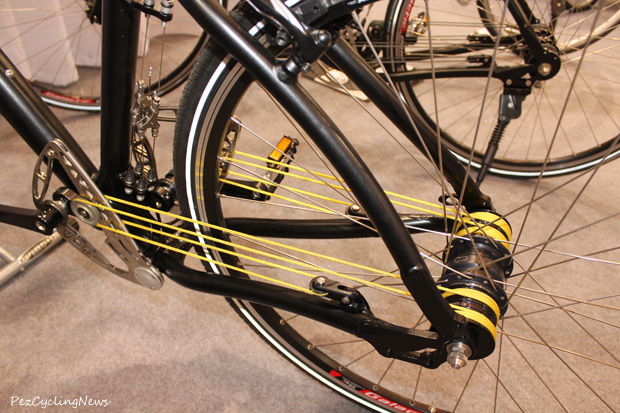 A string drivetrain on a city bike… 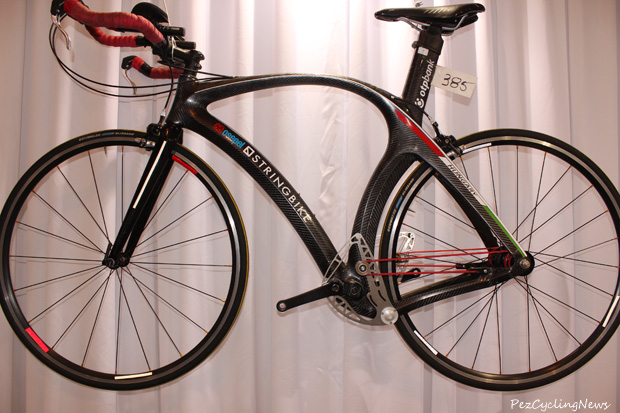 or how about a funky road version?

The inventors claim the advantages are numerous. There is no lubricant to get you dirty or collect grit; no rattling—in fact my test ride was eerily silent; easy removal of the rear wheel in the event of a flat; fewer parts to need replacing; high efficiency. The Stringbike has a 19 speed gear system controlled by a twist grip and pedalling backwards still gives you forward motion! A road bike equipped with the string drivetrain was used to successfully complete the Race Across America (RAAM) this year. The Stringbike is in production and the company is seeking more distributors.

Although the Stringbike is pretty startling, the final new product to highlight here is one that is perhaps even more revolutionary. Much fun was made of the idea that Fabian Cancellara was winning races through the help of an auxiliary electric motor a few years ago but that electric motor, with the battery in your water bottle is still around and marketed as the Vivax. It is claimed to fit any road bike and would be barely noticeable except for the noise: 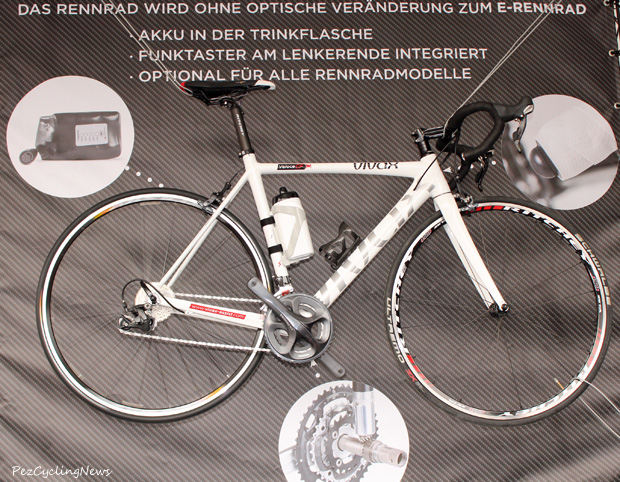 But going in quite a different direction is the Winora Group, whose Haibike brand offered an e-MTB last year that has turned into an unexpected sales hit. More than 200,000 e-bikes are sold in Germany alone each year and a good part of Eurobike was devoted to this part of the market with every major brand, ranging from Giant to recumbent builder Hase, having something on offer. While the market might be saturated with $10,000 racing bikes the demand for e-bikes shows no sign of slowing down and manufacturers see profit potential that is missing in high-end traditional bicycles. This year Haibike presented its e-road bike to enormous interest and while you might not want to push its 18 kg weight up the Alpe d’Huez if the battery dies and it certainly won’t be UCI-approved the e-road bike might be the start of a trend bearing watching. You read it here first! 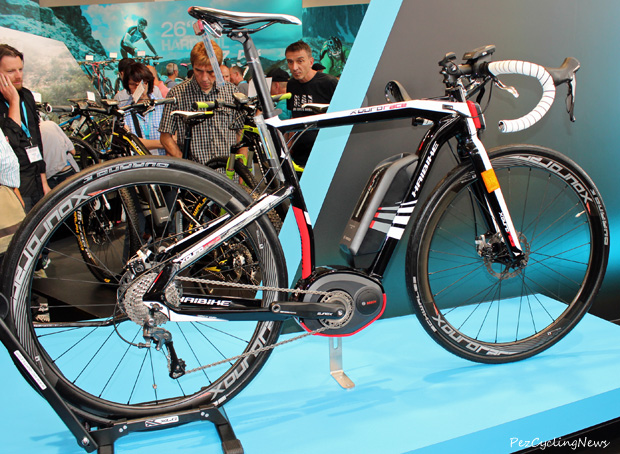 When not being forced off the bikepath by retirees speeding on e-bikes, Leslie Reissner may be found getting all charged up at www.tindonkey.com