Got those end of the season blues? Don’t worry we still have loads of racing and news in today’s EuroTrash Monday. Rui Costa comes home to a big reception and there is lots of action in Japan, China and France. Cyclo-cross is now at full speed and we have the video from the weekend’s races. As usual it’s a EuroTrash coffee time Monday morning.

TOP STORY: Welcome Home Rui!
World road race champion; Rui Costa had not been home to Portugal since his big victory as he stayed over in Switzerland before the Tour of Lombardy and then went to ride the Tour of Beijing for his Movistar team. He arrived at Sá Carneiro (Porto) airport in his World champion’s jersey to a crowd of around one thousand fans. Costa made this statement on his Facebook page: “What a great reception they made me yesterday…I am still overwhelmed at the amount of people who attended my arrival. To all my family and friends, all distinguished and anonymous who insisted on coming to welcome me, MANY THANKS. Thanks also to all those who could not attend but were with me in their thoughts.”

Later in a press conference, Costa said: “It’s a year I’ll never forget. I know it will also be very tricky to match a year like this, but I will not lower my guard and I’ll continue to work hard and hope that next year will be as good as this. I’m world champion, and I’m looking forward to my year in the rainbow jersey. My rivals will perhaps look at me differently but I’ll stay the same and hope to keep on winning.” 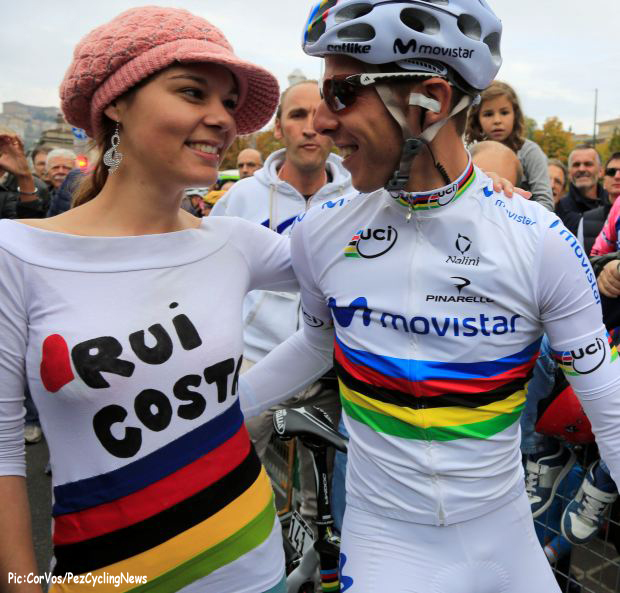 Japan Cup 2013
Team Saxo-Tinkoff finished the season with a fantastic result in Japan Cup Road Race where Michael Rogers took matters in to his own hands and soloed his way to victory in heavy rain after 151.3 kilometres of riding.

The mountainous course in Utsunomiya Forest was an excellent fit for the powerful Saxo-Tinkoff Aussie. Rogers had been a part of a break and attacked with Josh Edmondson (Sky) and when he first broke clear on the final lap a handful of chasing riders were not able to catch him. Edmondson was caught and passed by Jack Bauer (Garmin-Sharp), Damiano Cunego (Lampre-Merida) and Julian Arredondo (Nippo-De Rosa) for them to finish in that order with Edmondson struggling home in 10th place.

Michael Rogers explains: “On the penultimate climb, Rory (Sutherland) and Evgeny (Petrov) did an amazing job narrowing down the front group to just seven or eight riders and soon I was alone with Edmundson (Sky). In the finale, I managed to so solo and was actually able to enjoy the final kilometres as the margin kept growing. A great way to win all thanks for the perfect set-up by teammates and a magnificent way to finish the season,” Rogers concluded.

Saxo-Tinkoff DS, Philippe Mauduit adds: “In the beginning of the race, a small group managed to create a gap but the big teams worked together in the chase and had the race under control. Our boys did a perfect job setting up Michael for the finale and when Michael first got a gap, he went in to time trial mode and was impossible to catch,” said Mauduit.

“I think the team performed a very good race, but Rogers was the strongest today,” Lampre-Merida DS Vicino explained. “The race had become so demanding because of the cold and the rain, that’s why I’m happy about our performance. Cunego and Mori were skilfull in joining the main attack of 10 riders in the final part of the race, despite the had a good reciprocal cooperation, they could not stop Rogers.”

In the city of Utsunomiya, a small breakaway group broke clear of the pack before the peloton started reeling them back and the sprinter teams positioned their sprinters for the bunch gallop. And Garmin-Sharp Aussie, Steele Von Hoff was the fastest rocket of the bunch and sprinted his way to victory.

Tour of Hainan 2013
Moreno Hofland made a flying start to the Tour of Hainan. In Stage 1 of the Chinese stage race the Belkin Pro Cycling Team neo-pro recorded his first win at the highest level. On the “Hawaii of China”, he also claimed the first leader’s jersey of the race.

“This is very cool,” said a happy Hofland. “I was good in Beijing, where I already finished third in the final stage and winning here feels great. I hoped I could pull it off, but that’s always easier said than done. Now I hope more victories will follow, for the team and for me, as well.”

Hofland forced a break of 15 riders along with his team-mates Tom Leezer and Jos van Emden. In both intermediate sprints between Chengmai and Chengmai old Town, the Belkin Pro Cycling Team ruled. On both occasions, Sports Director Michiel Elijzen’s riders claimed the first three spots. In the last seven kilometres, Hofland attacked along with Frederic Amorison (Crelan-Euphony).

“The plan was to ride for Theo Bos but when we saw we were going to make it I just gave everything,” continued Hofland. “After a few attacks, I was able to follow Amorison. In the final kilometre, I waited and when I started my sprint, I was instantly clear.”

Elijzen could not have wished for a better start to the Tour of Hainan. With the 29th win of the season in the pocket, the team will keep hunting for victory 30 — or maybe more.
“The boys were all very strong today. We were very dominant. We collected all the bonus seconds. I think we really have a chance to claim that 30th victory”, said Elijzen.

“Theo won the group sprint easily today, which is a good sign as I expect some more bunch kicks this week. The guys are all motivated and strong. We should be able to get that one additional win, and maybe more.”

World Cup Cyclo-cross, Valkenburg 2013
Lars van der Haar (Rabobank Development Team) showed the older riders how to race through the mud and climbs of the Cauberg circuit; he also made history as the first rider to win a UCI World Cup race with disk brakes. The ex U23 World cross champion was dominant from the start, and the Dutch champion broke the Belgian cyclo-cross stranglehold finishing 20 seconds ahead of Kevin Pauwels (Sunweb-Napoleon) and 39 in front of German champion Philipp Walsleben (BKCP-Powerplus). Belgian champion Klaas Vantornout (Sunweb-Napoleon) was fourth as ex-World champion Niels Albert (BKCP-Powerplus) couldn’t get in the top 10. Worst off was current World champion Sven Nys (Crelan-Euphony) who crashed, punctured, snapped a chain and eventually called it a day.

Kermiscross 2013
Klaas Vantornout (Sunweb-Napoleon) seems to have the early season form with this second straight win in a row. The Belgian champion got the better of Niels Albert (BKCP Powerplus) on Thursday in Ardooie, West Flanders, with the German champion; Philipp Walsleben (BKCP Powerplus) in third. World champion; Sven Nys (Crelan-Euphony) had been in the action but punctured and was passed by Tom Meeusen (Telenet-Fidea) and Gianni Vermeersch (Sunweb-Napoleon).

Five Goals For 2014
Sporting Manager Allan Peiper, who will lead the team’s five sport directors as well as oversee the new Sports Science Division, said he has five objectives for the BMC Racing Team for 2014. “This team won 21 races and the world championship last year and we won 30 races this year in what we call an unsuccessful year,” Peiper said. “So next year, it would be great and it would be successful if we could have 40 wins, win a one-day classic, a grand tour, the world championship team time trial and retain our place again in the top three of the UCI teams.” Returning sport directors Fabio Baldato, Yvon Ledanois, Max Sciandri and Jackson Stewart will be joined by newcomer Valerio Piva.

Continued Growth And Development
BMC Racing Team President/General Manager Jim Ochowicz said he has marveled at the considerable growth of the program since the team’s inception in 2006. “We’ve won a Tour de France title, a world championship and many other races,” he said. “We have grown each year, we have developed each year, and we continue to grow and develop. I’m excited about 2014. We have lofty goals – we need those – but we have a very capable group of riders. All of us together, sport directors, riders and staff will meet those goals and show the peloton again what we are all about. I know a lot of the other teams are very competitive and we need competition. We enjoy it. So we’re looking forward to a really strong season in 2014.”

New Belgian Team
According to Het Laatste Nieuws Belgian footballer Timmy Simons and Omega Pharma – Quick-Step DS Wilfried Peeters are to start a UCI Continental team. Simons part owns a real estate company in Belgium and with the help of Peeters they are to set up a combined road/cyclo-cross team with 15 riders. Some riders have already been listed as possible team members: Rob Ruijgh (Vacansoleil-DCM), Kevin Peeters (Crelan-Euphony), Kevin Hulsmans (Vini Fantini), Rob Peeters & Joeri Adams (Telenet-Fidea), Jens Adams (BKCP-Powerplus) and Wilfried Peeters talented son; Yannick is also linked to the new team. The original idea was for a cyclo-cross only team, but due to the crisis in cycling at the moment the team will also ride the road.

Jose Maria Jimenez
The late ‘Chava? Jimenez was one of the best true climbers of his time, but he was very unpredictable and sometimes temperamental. This 2011 documentary is in Spanish, but there are some great scenes from his childhood to his sad end.

The PEZ NEWSWIRE!
Don’t forget to check the “NEWSWIRE” section, you can find it down the right hand side on the home page, just above the EuroTrash section. The bits of news that missed the EuroTrash deadline are in there, plus any news as-it-happens will be added there too.

EUROTRASH Monday: All the Cross and Other News From the Bunch