It seems like just yesterday that we were looking forward to the Flandrian Classics, they’re over, and now even Amstel is in the books. The cycling world spins ever so quickly. There’s much from Holland and way more from around the world. The trash man is rolling down your block. Read on!

Bos Goes 100% Nuts
Or did he? The footage from the final kilometer of the final stage of the Tour of Turkey is without a doubt nauseating. As the sprint begins to set up, Rabobank Continental’s Theo Bos appears to reach over, grab a fistful of race leader Daryl Impey’s jersey, then yanks. It looks like he yanks him nearly right off his bike, into Bos, and down they go. This is worth seeing a few times over, because there’s going to be a lot to come from this moment over the coming days and weeks I suspect. This is a rough video to watch, but hey, Podium Cafe’s commentary is as always both insightful and enjoyable. 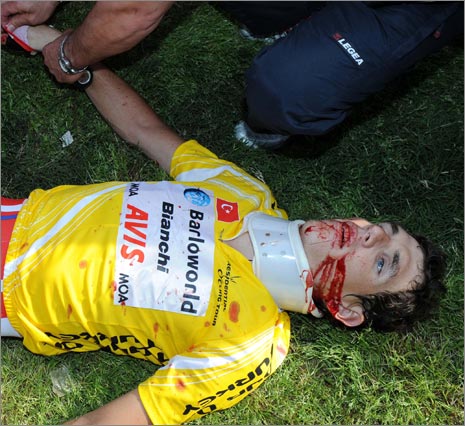 Regardless of what Bos did/ did not do, here’s the result – a bloodied and broken Daryl Impey. A shocking reminder that we need to look after each other.

So What Happened?
Impey still managed to hang on for overall honors, but he did not get the pleasure of the final podium. He was taken straight to the hospital. The damage report is painful to read: a fracture of the third disc of his lumbar vertebra, a micro-fracture of his neck, facial trauma, a few broken teeth, and a deep cut in his lips. Bos escaped with the normal cuts and abrasions typical of going down at high speed.

The polemics really get started at this point. Bos is defending himself up and down. He says that he’s not crazy, that he didn’t mean for anything like that to happen, etc etc. Impey is of course none too pleased about his huge win gone to hell.

Lance Armstrong and Robbie McEwen are both weighing in via Twitter. Armstrong wants Bos’s head, whilst McEwen eventually came to a different conclusion after watching the sprint, many, many times.

I’d like to think that Bos isn’t an out and out nutcase. I kinda like the guy. He’s a big ol underdog on the road now, and his switch to the road has been interesting to watch…to say the least. Maybe it’s not quite like it appears, or maybe he’s a straight up maniac, because if that video actually played out the way it looks – he deserves a very long delay before he races again.

A Look At The UCI World Rankings
Thankfully, the World #1 makes sense. Heinrich Haussler sits high atop the list as Nummer Eins. The Man of the 2009 Spring is currently enjoying a peaceful break after a fantastic first few months of the season.

Methinks Haussler doesn’t have a prayer against the onslaught of Senor Contador by year’s end. He’s pretty close to a sure thing in every stage race he enters. When he doesn’t win a stage race (Paris-Nice), he leaves an indelible mark anyhow – namely two stage wins and some serious aggression.

Amstel Gold Wrap
I can say all I want about the finale of Amstel Gold, or I can just usher you over to the link to see the final few minutes for yourself. It’s worth the watch. If you have any other questions, feel free to check out Gord’s great report.

Carnage At Amstel
Frank Schleck and Matthew Lloyd were the two worst hit by a large crash on Sunday. Both did not move after the wreck, both were in the road motionless for a long while, and the fears were definitely headed for the worst.

Race doctors even went so far as to pull out a white sheet for Lloyd. There was one frightening moment where it wasn’t quite visible whether they had covered his head or not. It was no joke.

Both ended up ok, but Schleck came out far better. Schleck the Elder was just knocked out cold. He suffered a concussion, but there’s hope that he’ll be back for Wednesday’s Fleche Wallonne.

Lloyd did not come out so well, but considering that for a moment the fear was of the absolute worst, it’s still a sigh of relief. Lloyd suffered a longitudinal fracture of the sacrum plus three fractured vertebrae: L3, L4, and L5. Lloyd is currently in the Academic Hospital in Maastricht. He will remain there for the week.

PEZ wishes him all the best in a quick recovery.

Hamilton: A Sad, Sad Story
It’s tempting to just dismiss Tyler Hamilton as a wanton doper, who is finally getting his comeuppance with his second doping positive, but I’m just not good at that. I still don’t quite know where Tyler fits in all of this, but he’s without a doubt one of the sadder stories in the sport. In a way, I’m glad that this is it for Tyler. There will be nothing else. Whether he’s a good guy or bad guy, his time as a bike racer is over with. In trying to write something about this utterly depressing tale, I have to aim for someone who took the necessary time to really look into the tragic enigma that is Tyler Hamilton. I give all due credit to the following link to Chris over at PodiumCafe.com. I honestly could never have said it better.

It Just Doesn’t Stop With Rock Racing
I’ve been a fan of Rock Racing for a while now. I saw and felt their presence at races in America for the past few years, and I actually liked it. They were a show, but all in all, a positive show (no pun intended). It was good fun, great racing, a little over the top, but hey bike racing needs a little help. Rock is seriously wearing thin on that feeling though.

Apart from the innumerable ex-doper signings, which I can’t fault them too much for – they did their time, the rest has just become a circus of badness. First, there was Kayle Leogrande going positive, now Tyler is positive and done, and almost even worse – three firings because of a lack of money within the team. Not just any riders either, three more than solid racers, who somehow found themselves on the Rock Racing B Team after Michael Ball put way too many riders on their Continental Roster: Chris Baldwin, Michael Creed, and Cesar Grajales. Baldwin is a multi-time US National TT Champion, Creed is a talent still waiting to fully be enjoyed, and Cesar, well that’s the Cesar that beat Lance on Brasstown many years ago.

Anyhow, the reason? Not enough money. Ball says in a team press release: “In personally funding the team each month, I’ve had to make some very difficult choices based on the long-term interests of the team. All three are incredible talents who I have great respect for. When our sponsorship goals are achieved, I want nothing more than to have all three back on this team.”

The once entertaining show of Rock Racing is now just about done with in my book. I hate to see bike racers run through the wash anymore than they already are. The manner in which the trio received their walking papers was abysmal, embarrassing, and unprofessional. For a team that has eyes for the big leagues, something needs to be done about the farce that currently exists.

Will the team make it through the year?

Liquigas For The Week In The Ardennes
The last three North classics will be centred in one week. The Amstel Gold Race, planned on Dutch ground on Sunday 19th April, will take the riders from Maastricht to Valkenburg. The second appointment, on Wednesday 22nd, will be the Flиche Wallonne, the classic that will start from Charleroi and will end in Huy with the homonym and fearful Mur. At the end, on Sunday 26th, is the day of Liиge-Bastogne-Liиge, the oldest race that will engage the riders for 261 kilometres and among the Ardennes’ cфtes.

Team Liquigas’ hopes are placed in Vincenzo Nibali, returning from an encouraging performance in the Vuelta al Paмs Vasco and eager to pick the first success of the season. «The answers received on the Spanish street comfort me – declares Nibali –. During the week I was near the best riders and my legs well answered at the forcing: I missed only the victory. Now I’m ready to face these classics to aim high, conscious that won’t be easy beat the competition. I well know the routes and I think are adapted to my characteristics, above all the Liиge’s one: the tenth place of the last year will be the starting point». To increase the chance of victory, in Amstel Gold Race and Flиche Wallonne also Roman Kreuziger will be present, returning like Nibali from the Basque efforts.

«I face these races with a growing condition – affirms the young rider -. The training camp in high mountain, at the end of March, is helping me a lot and in Basque Country I gained a good race rhythm. In Holland and Belgium I’ll search to be protagonist but, above all, to support Vincenzo for the victory». For the Liиge-Bastogne-Liиge will arrive Ivan Basso and Franco Pellizotti, ready to put at disposal their experience in the numerous ups and downs that characterize the Doyenne.

The complete line-up of the team, headed by directeur sportif Dario Mariuzzo, for the three classics:

CamelBak’s Great Promotion For The 2009 Giro d’Italia
Bassano del Grappa (April, 2009) – Garmin, Pearl Izumi, Fi:zi’k, Felt Bicycles and CamelBak® are turning “one man’s trash into another man’s treasure” with a Garmin-Slipstream promotion offering more than Ђ 8.000 in prizes to Giro d’ Italia spectators and cycling fans. CamelBak’s “Pick Up the Podium” promotion rewards people for picking up the company’s team issue Garmin-Slipstream Signature Podium™ bottles after the team’s riders hydrate then drop them throughout the Giro. Spectators who pick up these dropped bottles along the Giro will find a promotional sticker on each bottle that enables them to win prizes from Garmin-Slipstream’s most respected sponsors.

Garmin-Slipstream chose CamelBak’s technically superior Podium™ and insulated Podium ChillJacket™ water bottles to hydrate its riders throughout the 2009 season. Both Podium bottles feature CamelBak’s high-flow JetValve™, which is self-sealing so athletes can grab, drink from and stash the bottle without worrying about opening and closing the valve. An additional lockout toggle prevents leaks while transporting the bottle. The insulated Podium ChillJacket keeps liquids cool twice as long as standard bottles with its airtight, foam-lined insulation and double-wall construction.

“Together, Garmin-Slipstream and CamelBak are taking the concept of clean performance in competitive cycling to new heights,” said Mario DiFalco, Vice President of Marketing and Product Management for CamelBak. “The promotion is a great way for cycling fans to get close to the pros – so close they may even take home a Garmin-Slipstream Team Kit.”

To celebrate this Clean Racing partnership, CamelBak has lined up 91 “Pick Up the Podium” prizes from Garmin-Slipstream’s sponsors – some of cycling’s most respected brands. Coded stickers on each bottle represent a chance to win products ranging from Garmin, Pearl Izumi, Fi:zi’k, Felt and CamelBak. Participants email their promotional code found on each sticker to CamelBak – details are at www.camelbak.com. Prizes will be drawn on June 15, 2009; winners will be notified by email.

Amstel Gold ’09: Beers Are On Sergej!