Saturday, Fassa Bortolo unveiled their 2003 team to the cycling world. The team promised that all the victories
will be for their ex team mate, Denis Zanette, who passed away tragically earlier this from a heart attack. here’s what some of the riders had to say about the new season… 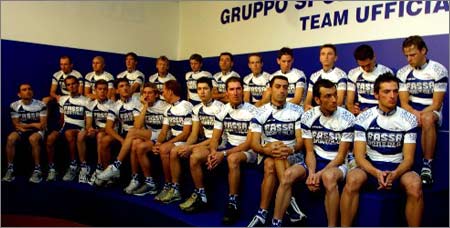 Ivan Basso: “I hope to do big things this year: run a great Tour de France but also try to win any Classics of North”.

Alessandro Petacchi: “I would like to do something important in 2003: win a classic for example. Milano- Sanremo, Tour of Flanders, Paris-Tours, these are the right classics for me. Milano-Sanremo is my favourite race and I will try to be ready for this objective. Now that I won at the Vuelta, I want to win also at the Giro, at home. This would be really nice…” 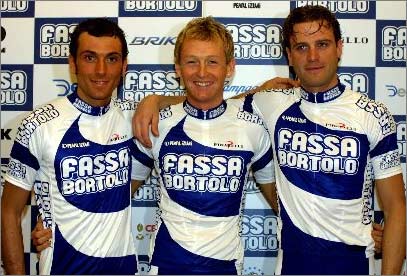 Dario Frigo: “I will try to do at 100% the Giro d’Italia, but I want to be already fast at the start of the season”.

Giancarlo Ferretti: “The Giro d’Italia is important for us. Dario Frigo want to do it well, and if Aitor Gonzales will run with us, we won’t forget him. So we will have 2 riders for the final ranking. With also Petacchi for the stages, we hope to do well…”