The last time I stood at the top of the slippery, mud-splattered, cobbled descent of the Kemmelberg, I figured I had bills and responsibilities that no-one would take care of for me if I was laid up in hospital. I walked the mud beside the drop rather than risk my luck on the unforgiving stones, smeared with decaying leaves. Today, I had unfinished business. I was back to face the slope that struck fear into me. 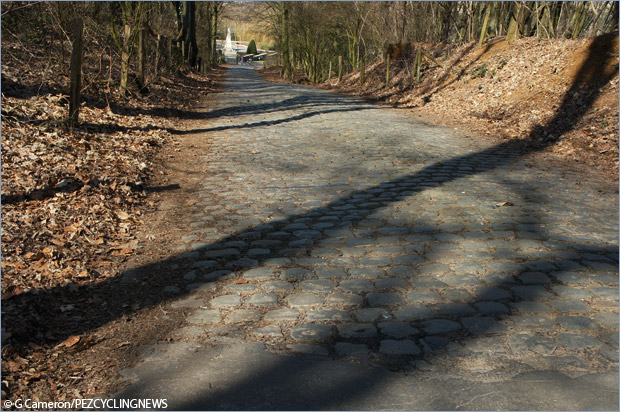 A year later, and I’d stand by my decision as the Gent-Wevelgem TV broadcaster sickeningly, and repeatedly, showed the slow-motion replays of Jimmy Casper’s face bouncing off the cobbles of the Kemmelberg after clipping a stray water bottle.

He was a pro, felled by a bidon ejected from another rider’s bottle cage. I was just a guy who liked to ride a bike, liked a challenge now and then. Not someone whose living depended on faster than split-second reactions, who needed to see a situation and already be avoiding it before it happened. 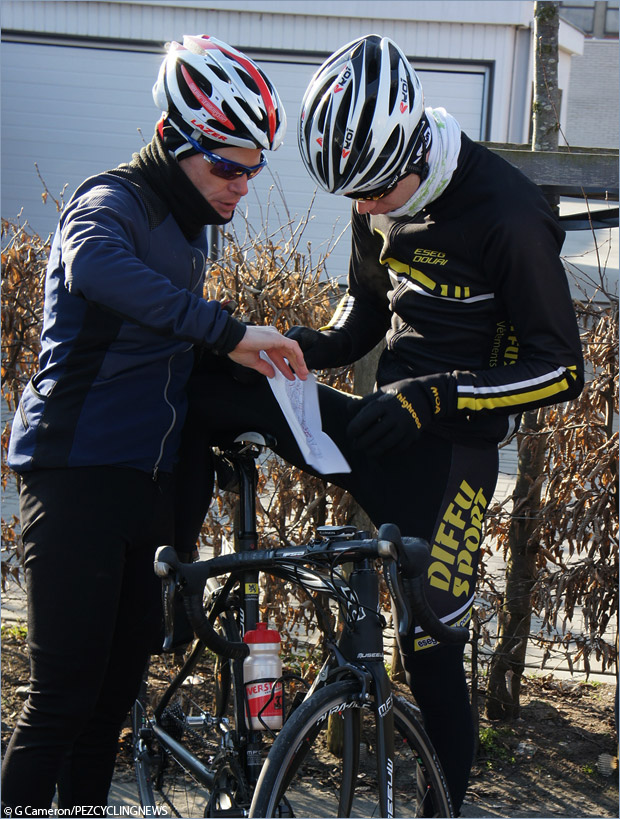 Velo Classic Tours have put together a challenging 100 kilometer route covering the most crucial sections of Gent-Wevelgem, a race that is right up there as a bona fide Classic as far as I’m concerned.

The VCT bus deposits us, our bikes and our day bags at the ride start in Wevelgem as we prepare to roll away from the city. Niels Nachtergaele, the ex-QuickStep Development team rider, is with us again. There’s a lovely scene as we prepare to depart.

Peter Easton, VCT boss, outlines his plan for the day and hands Niels the map. Niels looks at it for approximately 1.6 seconds, says “OK”, and stuffs the paper in his pocket. He knows exactly where he’s going. For those of us who don’t, we’ve got Pete, Niels and Asier as guides. 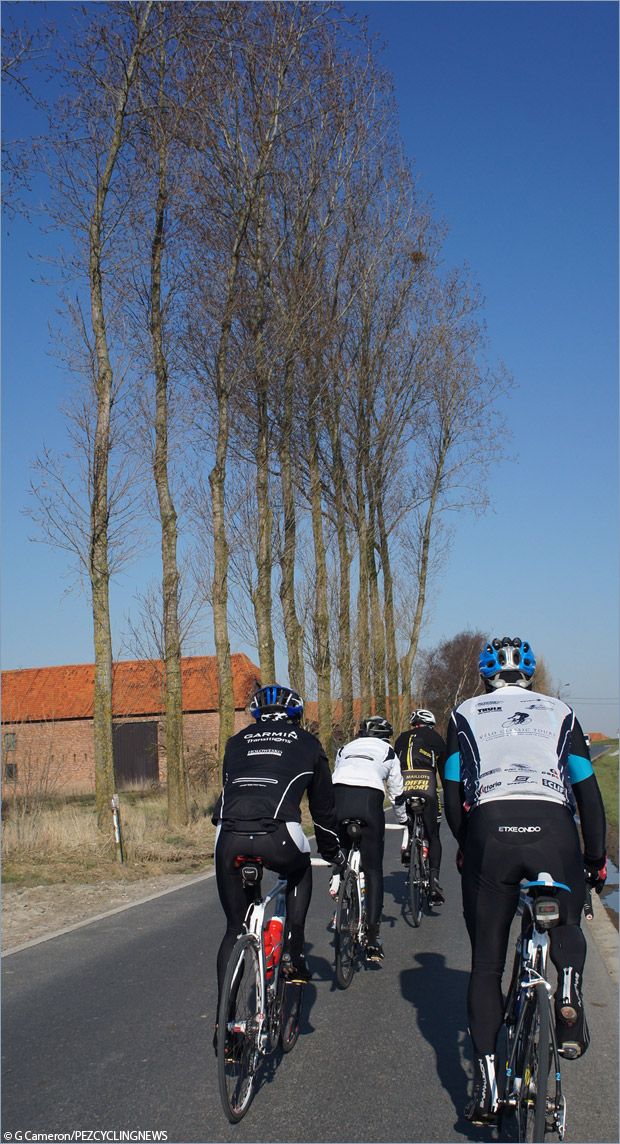 It’s still crispy cold out, but the scenery is blue skies and signs of spring. Lapwings cavort and flirt above the freshly ploughed fields. The sickly smell of slurry is in the air as farmers get the fields manured. 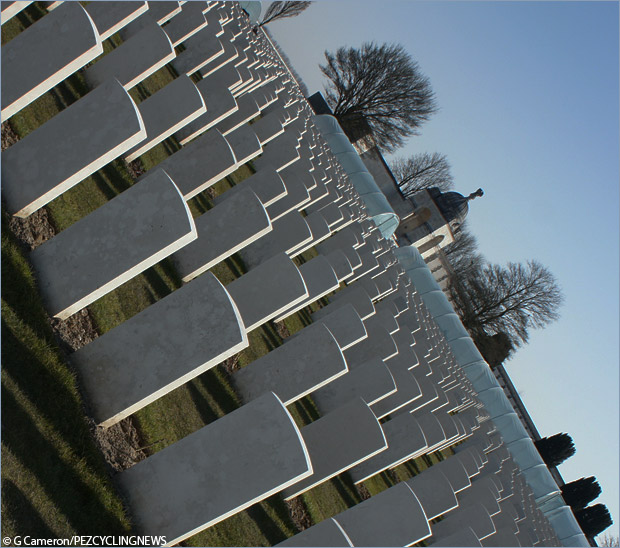 The first stop on the route is a humbling visit to the Tyne Cot Cemetery. Maintained by the Commonwealth War Graves Commission, it’s just ranks and ranks of the fallen. Stones in order, standing stark against the grass. As Peter Easton says quietly to me: “Sadly impressive, and impressively sad.” 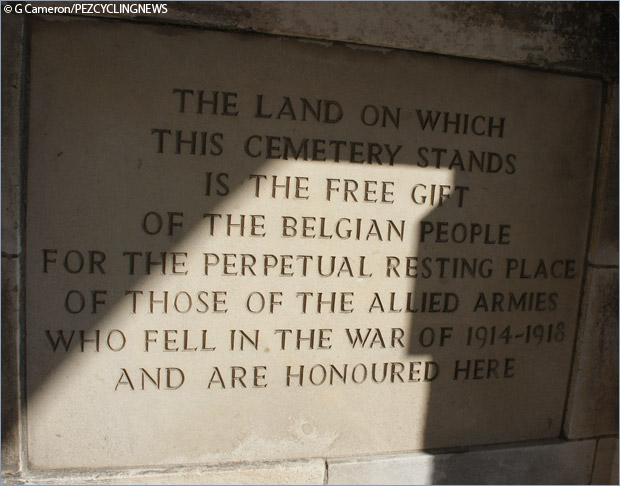 After, a quick stop for refuelling in the pretty town center of Poperinge, we’re heading for the bergs. Not before VCT’s Lisa Easton has gone the extra mile and tracked down a local apothecary, who hands out something that will deal with the after effects of some dodgy Belgian sausage (that’s not a euphemism, by the way). 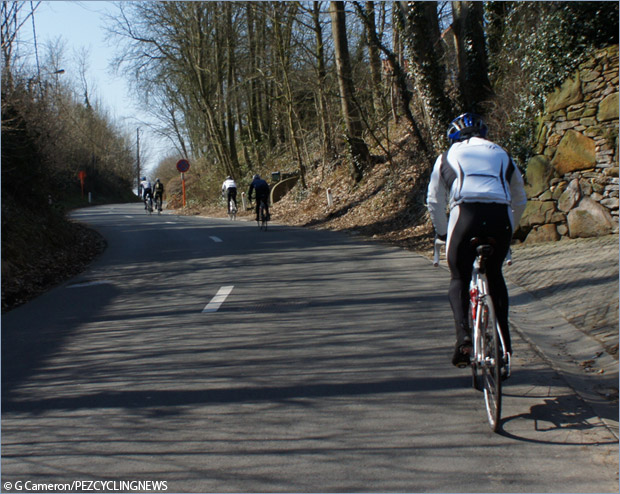 Niels knows these roads like the back of his hand, describing in detail the lead in to the Zwarte Berg, and we begin climbing almost imperceptibly, before the road swings up through trees, and takes a sharp left onto a more significant arterial road. 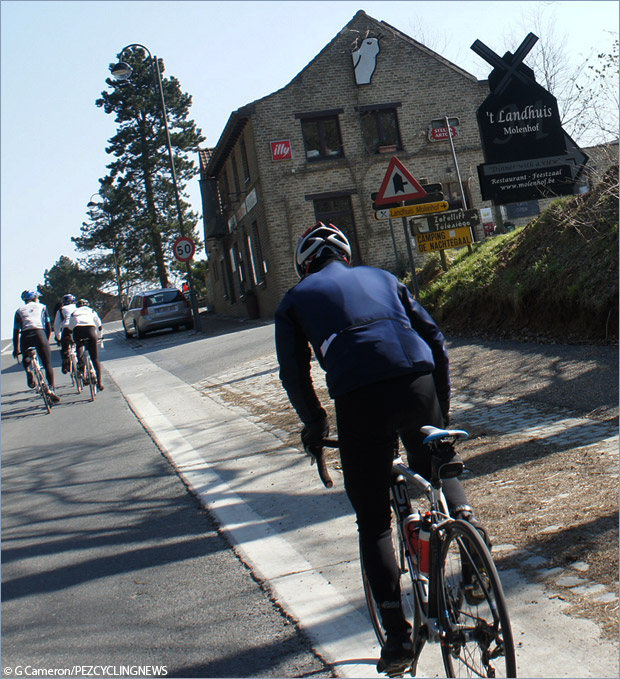 We’re on a ridge and the view is gorgeous. It rolls away below us, a mosaic of fields and hedges, houses and farms. The climbs are coming more regularly now, and the Rodeberg follows the Zwarte Berg’s coat-tails, rolling up past a nice pub on a corner of the road.

We fly on as the wind is helpful. Niels gives me a five-minute history of the Second World War, from a Belgian perspective, and proves that he’s not just a strong bike rider. He’s a very smart guy.

The Monteberg is next up, and it has a gorgeous run-in, meandering up through well-manicured fields as the sun shines down. The name of Andrey Amador, Movistar’s Costa Rican rider, is prominent on the road. He would surely never have believed he’d find fans painting his name in a remote corner like this … 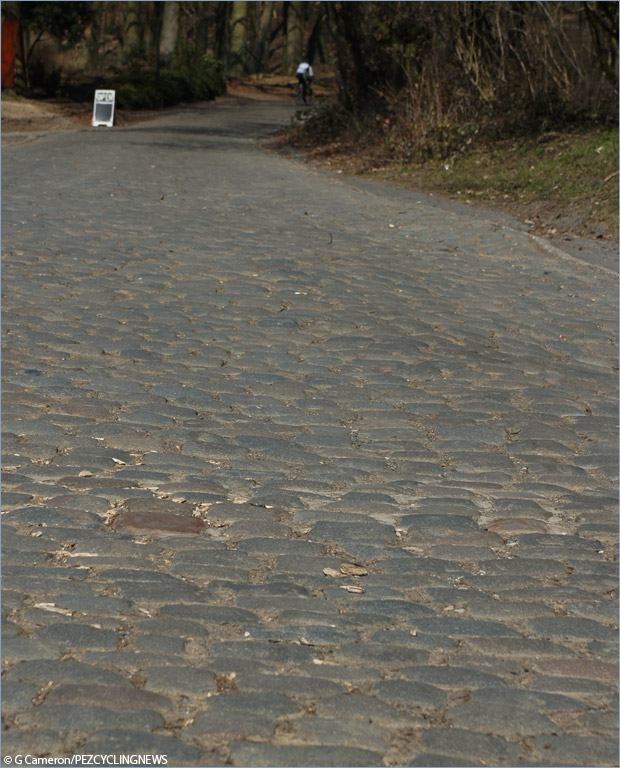 The big beast is up ahead, but I’m feeling less nervous. It must be the bone-dry conditions. We sweep off the Monteberg, and the Kemmelberg is more or less immediately following. Off the highway, and a sharp left onto the cobbles.

The start of the ascent is rough, and the bike bounces a little as I put the power through the pedals. The sunlight reflects off the polished stones as I make a barely perceptible right then left and the slope kinks and flattens a little. I’m up smartly, and there’s a gathering at the top to discuss the descent. 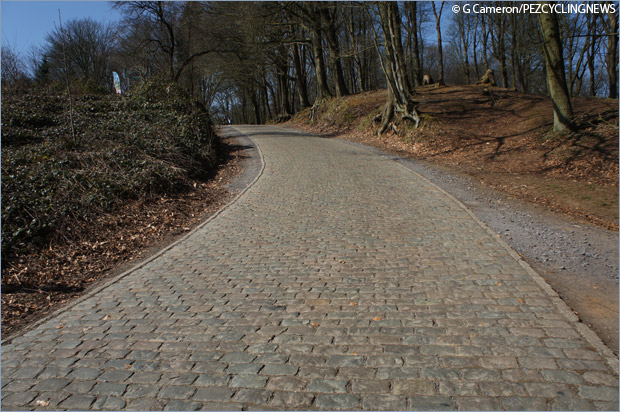 Niels takes some of the group down a tarmaced escape route, which the Gent-Wevelgem race now uses. The cobbled descent is too risky – but it’s dry, bullet-straight and leads onto a fast tarmac road towards the town of Kemmel.

I’ve got a choice: Kemmelberg cobbles, or Kemmelberg safety. A mental coin toss. Heads the cobbles. I close my eyes.The coin spins. Bounces on it’s edge and lands. Heads. It’s the cobbles. 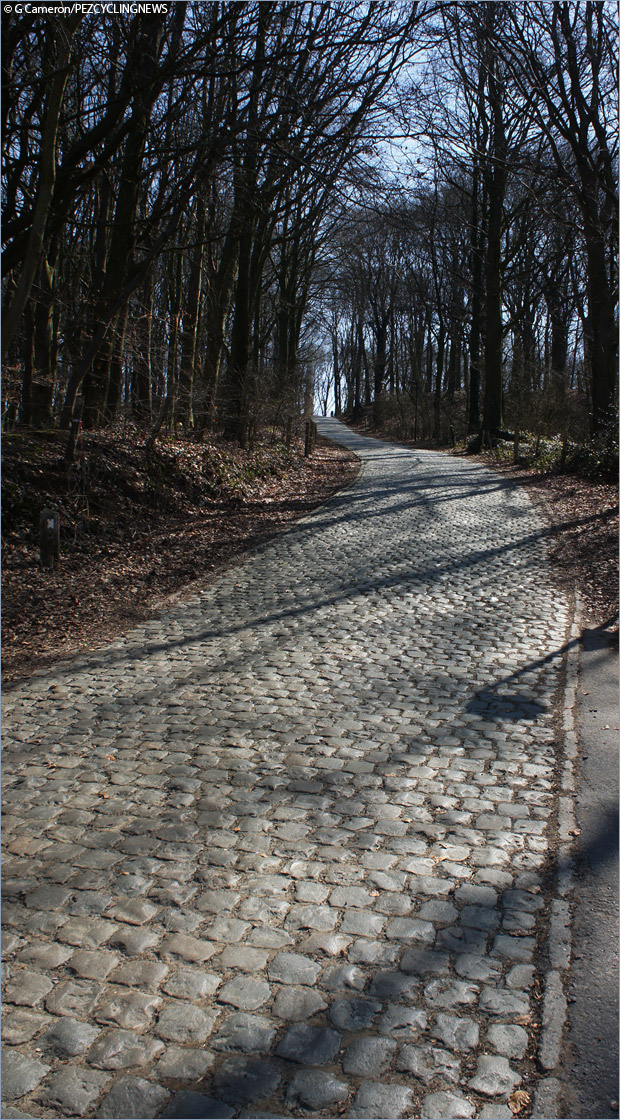 Through the shadows I try to pick a line I’ll stick with. I clip in and just barrel it, straight down the crown of the cobbles and fly. 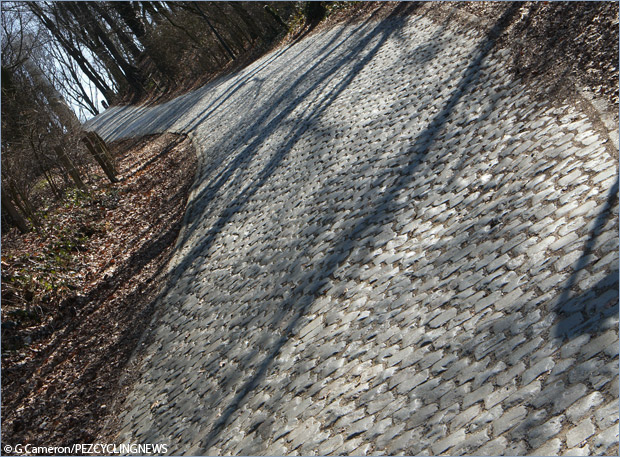 “Unfinished business”, is what I’d been telling myself when I was preparing for this ride. The conditions were perfect this time, and I know I’m not taking the descent at racing speed … but still.

For me, the fear of the Kemmelberg is conquered.

Thanks to Velo Classic Tours for organising the trip and for guiding us through Flanders.