There’s been a lot of chatter about the Tour of Flanders this past week since the organizers have again changed the parcours of the great event after supposedly listening to fans’ input. Nothing beats the old parcours though, as PEZ-Man Gord Cameron saw in the best possible way earlier this year – from the saddle.

There had been a gentle out and back leg-loosener of 40 clicks on the Thursday, but Friday’s itinerary with Velo Classic Tours brought me back in contact with a couple of topographical foes. Luckily, VCT’s Peter Easton has a super fleet of Focus Izalcos waiting for guests who don’t want to entrust their own bikes to the baggage handlers. After getting sorted out and tweaking saddle heights yesterday, I was pretty secure that it would only be legs letting me down today, rather than components. 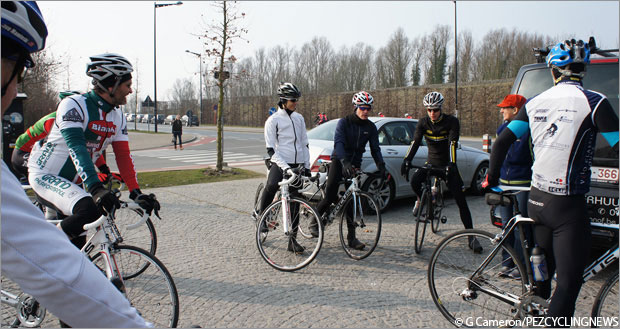 The bikes are loaded onto the VCT van and we hit the road to Oudenaarde to set up outside the Ronde van Vlaanderen Centre, from where we’ll start our 80-kilometer ride. There are clients from Iowa, Minessota, California and the UK, and guides from the Basque Country, Flanders, and New York. A multi-national, but cohesive group already, after only 24 hours together. 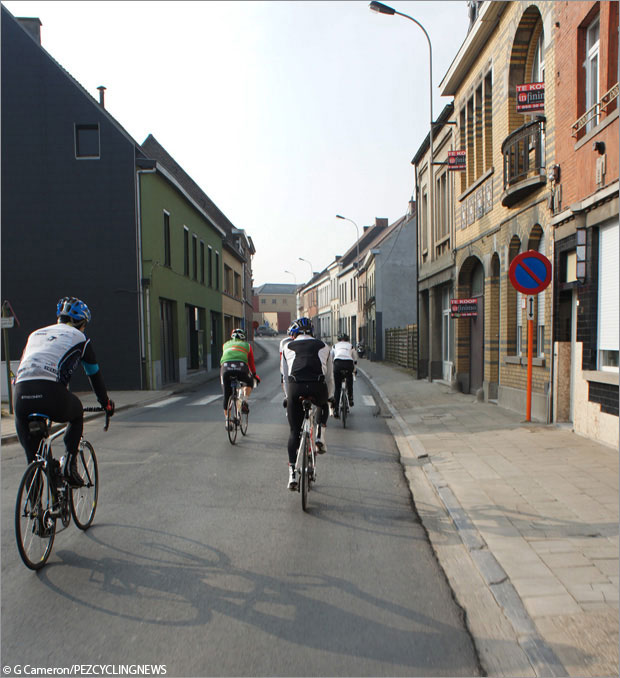 We swing legs over top tubes, and we’re coasting through the streets of Oudenaarde, heading for the first climb of the day – it’s about 500 meters into the ride, called the Achterberg, and it kicks like an angry little troll, ramping up and out onto a little ridge.

We’re accompanied by not one but three guides! As well as Pete and Asier from Velo Classic, a young local racer called Niels is along for the ride, and knows this part of the world inside-out. He was on the QuickStep development team last year, so he’s got pedigree.

The weather is cold and still, with a little chill mist hanging over the countryside. Perfect for Flanders in early spring. We’ve got six climbs and two cobbled sections ahead of us in the next few hours. 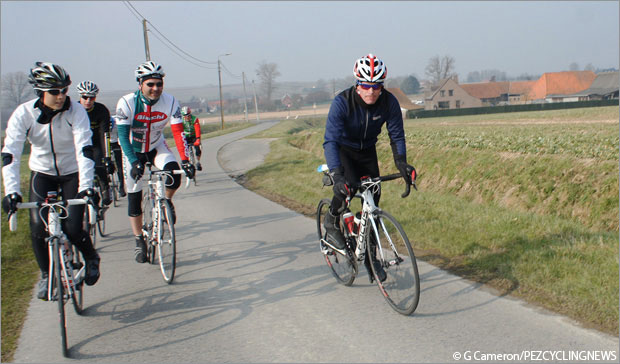 Getting out into less urban landscapes really reminds you of how pretty the Flemish countryside is, with pollarded trees lined along embankments. Patiently, they await the real start of spring; it’s too cold to burst into leaf just yet. 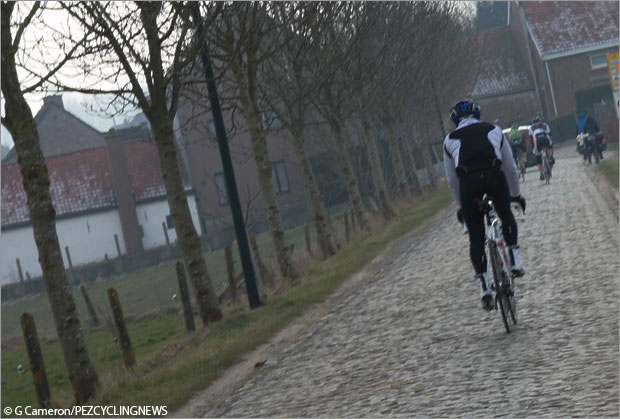 Our first glimpse of the cobbles is on the Haaghoek. I’m rolling along, failing to take a photograph of a windmill when Niels suggests I make sure the cameras secure because things will get very blurry when we make a next right.

I know the drill for these kasseien as the locals call the cobbles. Stick it in the biggest gear possible and try to ‘float’ over the stones. Unfortunately, last night’s excellent wine/Kriek combination meant I instantly felt like a homicidal cage fighter as trying to shake my brain out through my eyeballs. Everything is seen through an opaque filter. It hurts, but this is the experience we’ve come for. To know how hard it is at your own personal pace, and then multiply that by factor ‘x’ to understand what a pro goes through in the real Tour of Flanders.

We take the Varentberg and the Leberg, both of which have featured in the Ronde in the past, and the cold air adds to the thrill of riding such iconic roads. The roadside grass is still frosted over, framing the grey tarmac.

The Berendries is at about 100kms to go on the current race route, and it is flecked with graffiti dedicated to Annemiek van Vleuten as we wind our way to the top of its 7% average gradients. It’s a well-surfaced climb, but it has steep 12% pitches.

We pass sleeping houses, their drawn curtains and blinds like closed eyelids. The few people out and about carry on with their normal routine. They get plenty of cyclists up and down; maybe it’s no big deal when the Ronde has been thundering past your door for years? 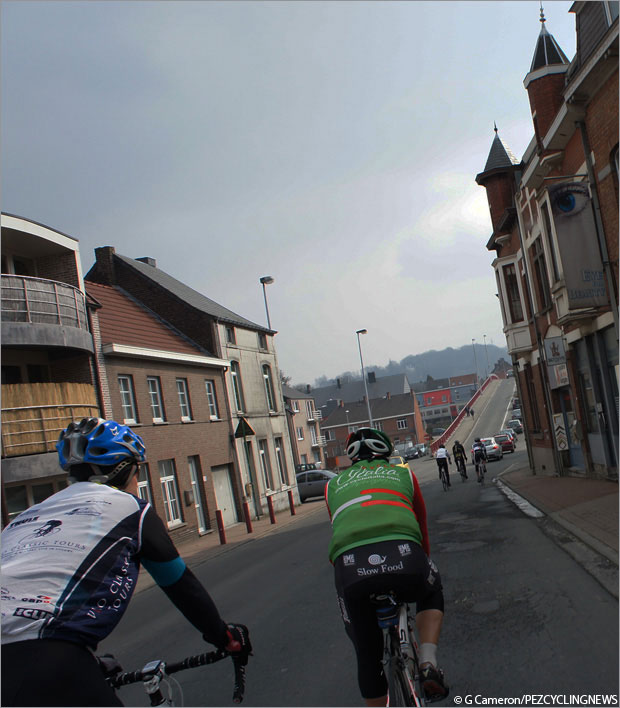 We cruise on and fly into Geraardsbergen, hammering over that famous bridge that leads you into town before the road squeezes up, up towards the Kappelmuur. I’d forgotten how long it was, thinking back to seeing the climb on TV. The whole climb is a little over a kilometer, and reaches to within a whisker of 20% in parts. 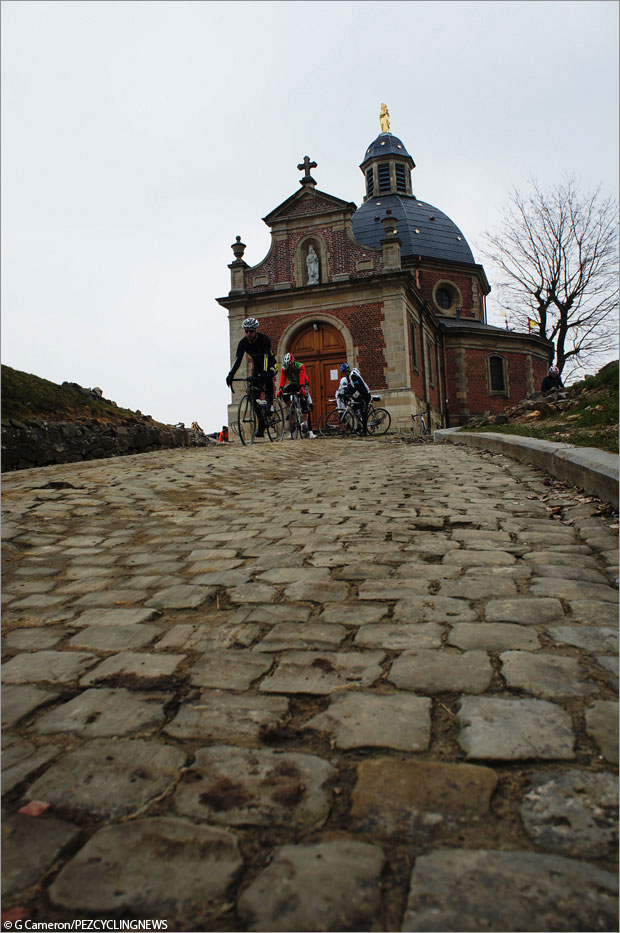 Twist through the town on those tight little paving cobbles that give you a fair old rattle. Then a sharp left, steeper between terraced houses, then right towards the trees, a sharp left-right welterwight combination and the last knock-out slug as you haul yourself up the Kappelmuur, round the curved hill and to the church.

The local authority are hard at work relaying the cobbles just in front of the Kappel and the last few tortuous meters are a thankfully dry mix of packed earth and sand. Everyone gathers at the top; it’s an achievement to have made it. 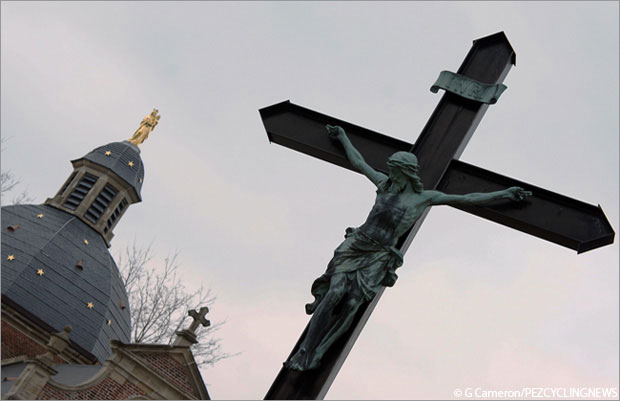 A group of Basque riders trundle down to where they can turn and hammer up again … and again … so that their buddy lying flat-out on the road can video them. 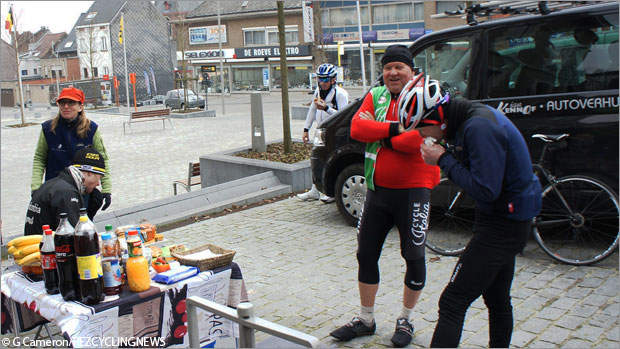 Lisa Easton has brought the back-up van to the centre of town, just below the Kappelmuur, setting up a mid-ride refuelling stop. Pockets are stuffed with energy bars and, yep, real food! Fruit, nuts and actual things you’d want to eat when specialist energy products get a bit ‘meh’ to digest.

The second half of the ride is less challenging – not so many climbs or cobbles, even if slightly longer. We stop at an intersection as an Orica-GreenEdge quartet flies past on the other side of the road.

The wind picks up, and the temperature stays defiantly low as we flirt with our destination, Oudenaarde. The Holleweg cobbles come at 120kms on the race route, and are a short 800-meter kick to the glutes. For us they signal the closing of the ride.

Respite is not far away, and we turn off the main drag and roll over a bridge and into the Tour of Flanders museum carpark, where VCT’s Lisa Easton has set up a table, chairs and lunch. We’ve got plenty time to take a turn through the museum, once we’ve eaten and changed into civilian attire. We’re not the only ones; a steady stream of riders heads inside to peel off cycling kit. 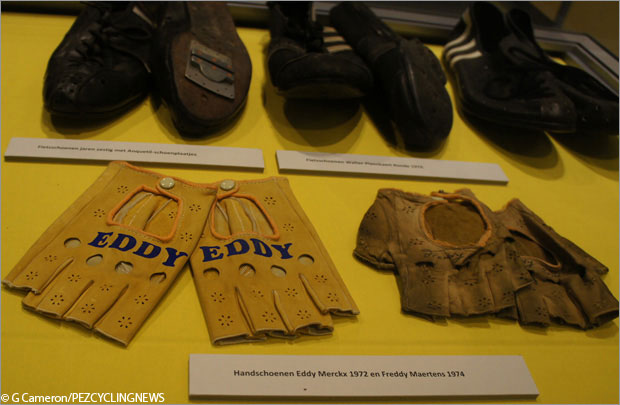 The Ronde van Vlaanderen Centre is a dream visit for anyone interested in the race, cycling in the region, and the sport in general. From the race’s origins to the most recent edition, there’s a wealth of information. You can be a real tourist and use an audio guide if your Flemish language skills aren’t the best. 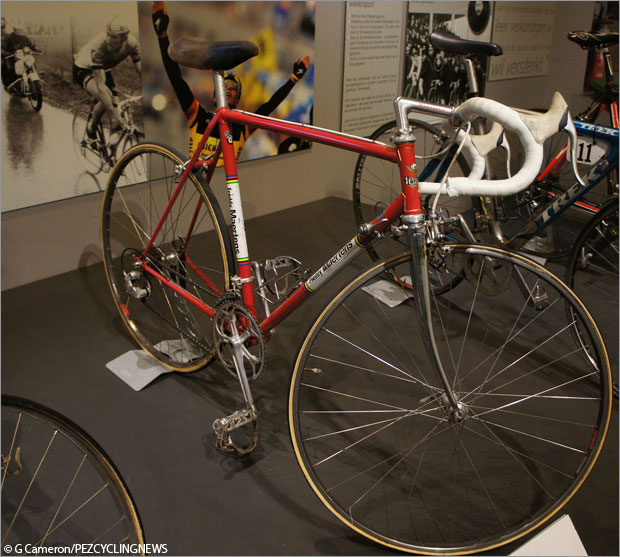 There was no sign of Freddy Maertens today. The Flandrien great is normally a permanent fixture at the museum, and Ed Hood met him when he visited on the weekend of Het Nieuwsblad, a month back. 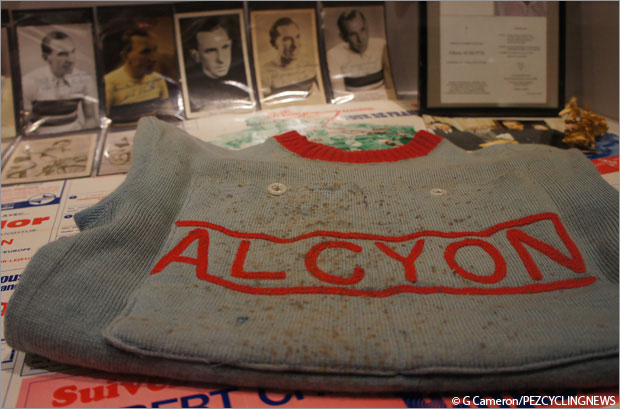 The late, great Briek Schotte is commemorated, and you can see some of actual jerseys, as well as a cracking collection of old collector’s cards bearing the image of one of the sports true hardmen. 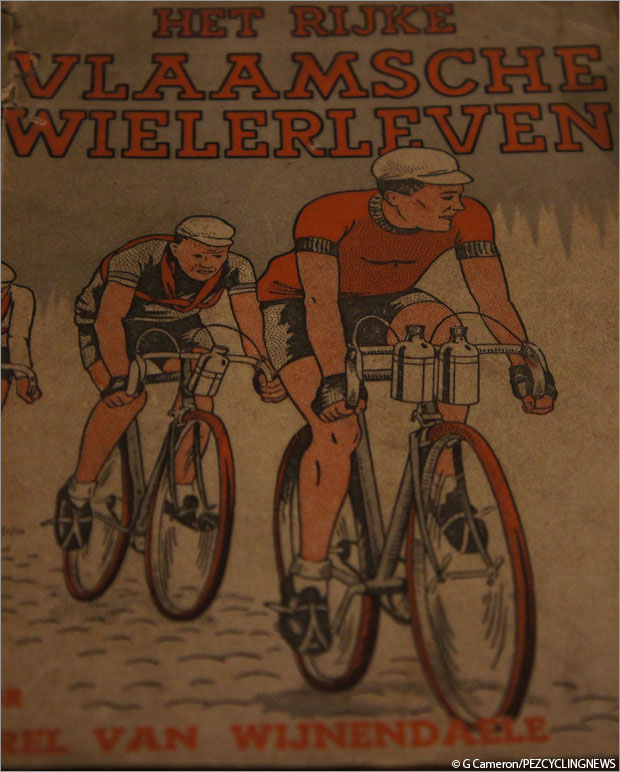 There’s a ton of information about Karel van Wijnendaele, the journalist who brought the Ronde to life back in 1913. He was born Carolus Ludovicus Steyaert, and adopted a pen-name, as he strove to use his journalistic abilities to give his fellow Flemish speakers words they could read in their own language. 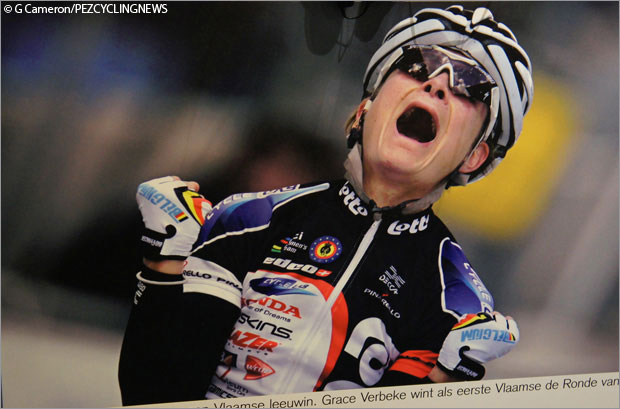 There’s more than a nod to the ladies, too, with a nice display comparing physical outputs against the men: Emma Johansson’s heart rate, etc. against Tom Boonen. Emma J is Swedish, but lives just outside Oudenaarde, speaks the language and has been pretty much adopted by the region’s fans. 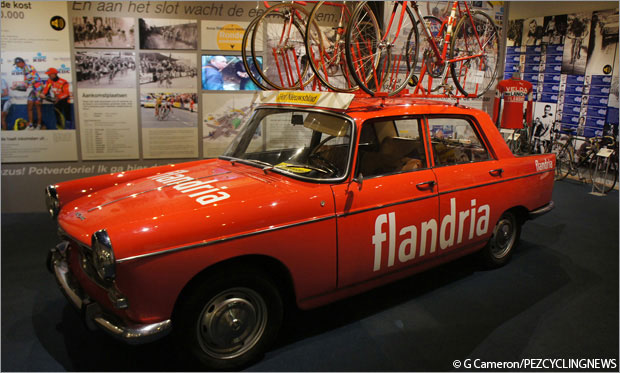 The iconic Flandria car sits just before you exit the museum, and the red paint job with white lettering burns an image into your mind that marks the Flandrian experience on your memory.

Thanks to Velo Classic Tours for making it all happen so smoothly.